Stage Report: Julian Alaphilippe won a lively stage 3 of the Tour de France into Epernay and took the yellow jersey. The Deceuninck – Quick-Step Frenchman was the best after 215 kilometres with a tough finalé. Jumbo-Visma’s Mike Teunissen couldn’t hold the action on the short, steep climbs and lost his yellow jersey after two days. 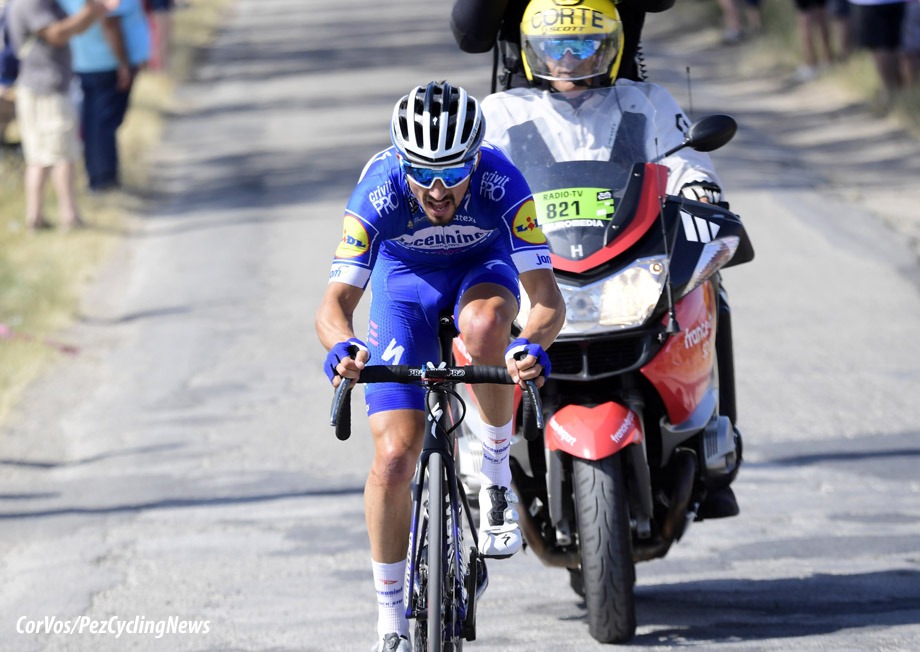 A very good day for France

As the Tour de France left Belgium to hit the home roads of France, a Frenchman – Julian Alaphilippe – pleased the home Nation with the stage win in fine solo fashion and took the overall lead from Mike Teunissen. 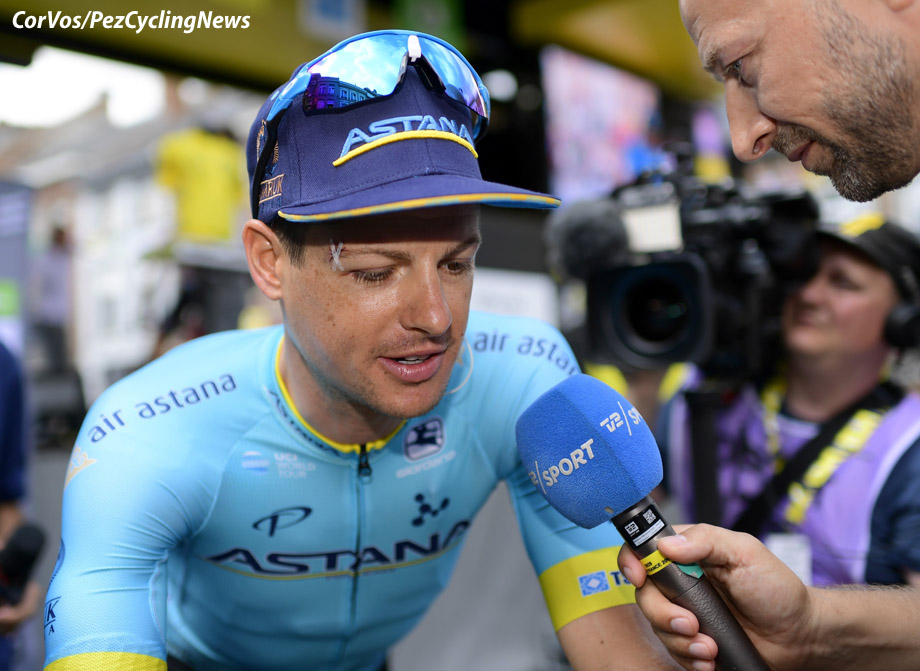 Stage 3 Route:
215 kilometres from Binche to Epernay, the peloton will enter France after 12 kilometres. Four climbs coming in the final 40 kilometres, one Cat 4 and three Cat 3, with the uncategorised Côte du Mont Bernon (1km at 5.5%) coming just 4 kilometres from the finish. The finish is uphill and the stage will suit a puncheur. Epernay is listed as a “French site of remarkable taste”, the Avenue de Champagne is sometimes considered to be the richest avenue in the world. The most famous street in Epernay is indeed the home to ten of the most illustrious champagne makers who all possess superb renaissance or classical style buildings. 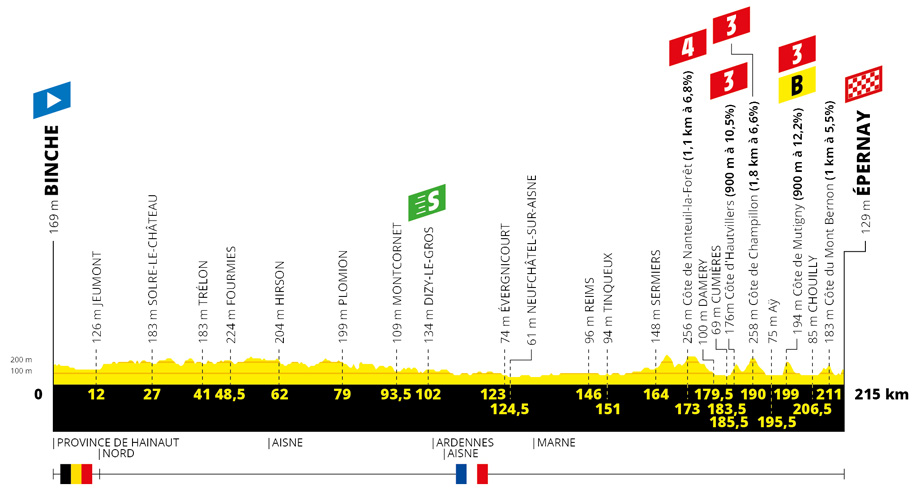 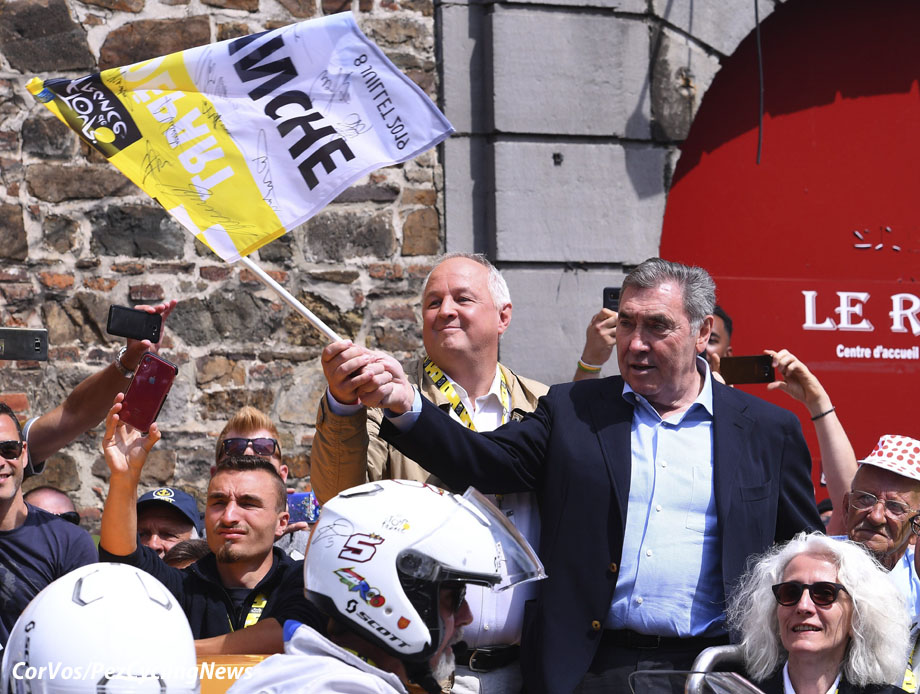 Eddy Merckx flagging off the start in Binche 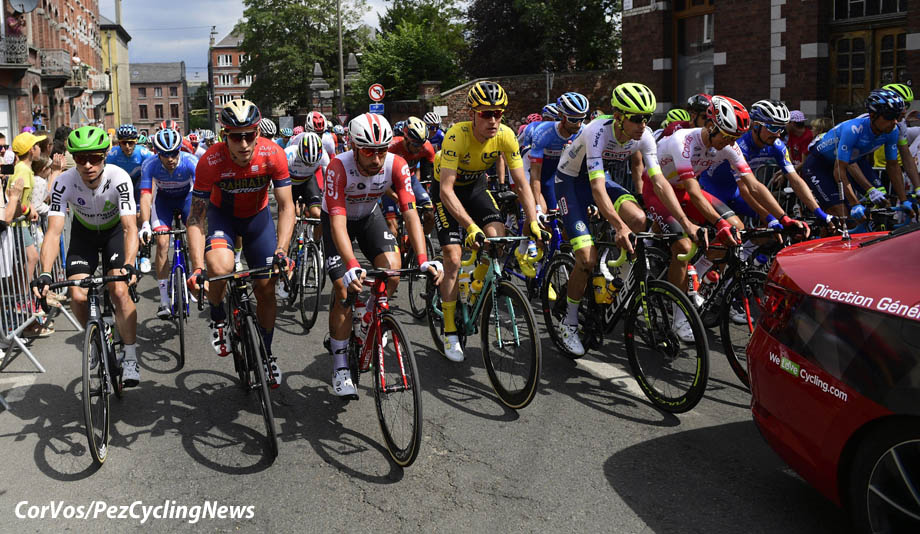 Another day in yellow for Mike Teunissen

Wellens on the attack
After the start in Binche, Tim Wellens (Lotto Soudal) started the attack. The Belgian was allowed the gap by the peloton and he was joined by four Frenchmen: Stéphane Rossetto (Cofidis), Paul Ourselin (Total Direct Energy), Anthony Delaplace (Arkéa-Samsic) and Yoann Offredo (Wanty-Gobert). The group took lead of over five minutes. 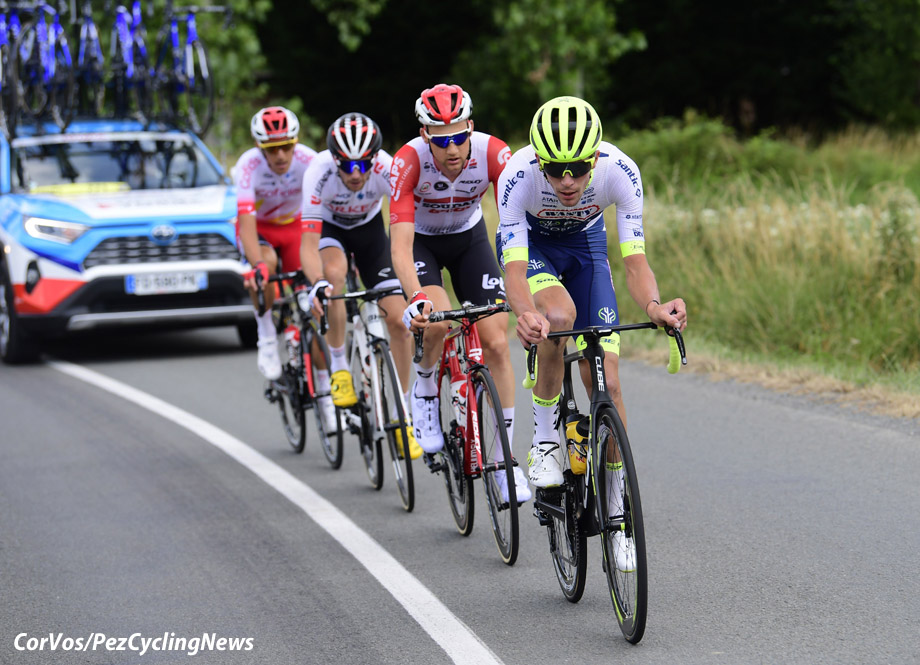 Tony Martin (Jumbo-Visma) led the chase for the peloton for a long time along with Kasper Asgreen for Deceuninck – Quick-Step. With a lead of four minutes Ourselin won the intermediate sprint in Dizy-Le-Gros. Elia Viviani won the sprint from the peloton for the remaining 10 points, ahead of Peter Sagan and Sonny Colbrelli. Sagan was now the real green jersey wearer as he has more points than Mike Teunissen. 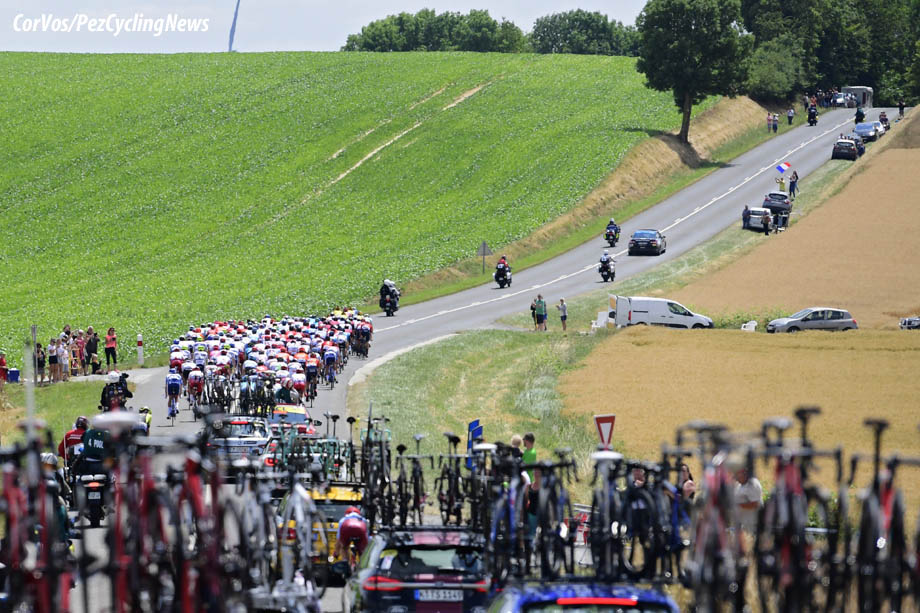 The peloton didn’t let them get too far away

Jumbo-Visma and Deceuninck – Quick-Step kept the pace high and the lead around 3 minutes. As the finalé neared, with the hills in the last forty kilometres, the peloton became nervous and restless. This caused several small crashes, also Thibaut Pinot suffered a puncture. 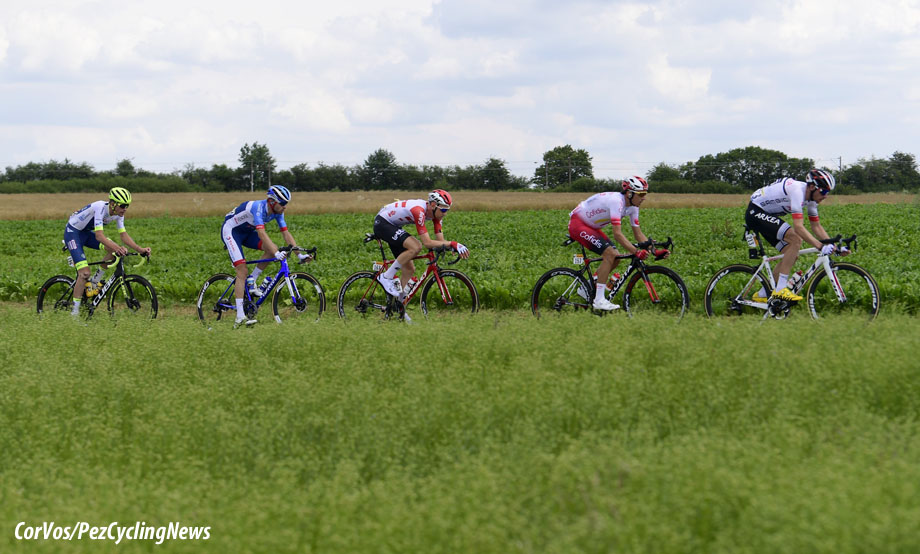 Wellens was waiting his chance

With 50 kilometres to go, Tim Wellens thought it was time to make his move. The Belgian left his fellow escapees at the start of the first categorised climb of the Côte de Nanteuil-la-Fôret with a 2:20 lead. Behind; Romain Bardet and Ilnur Zakarin both had punctures, but managed to rejoin the peloton. 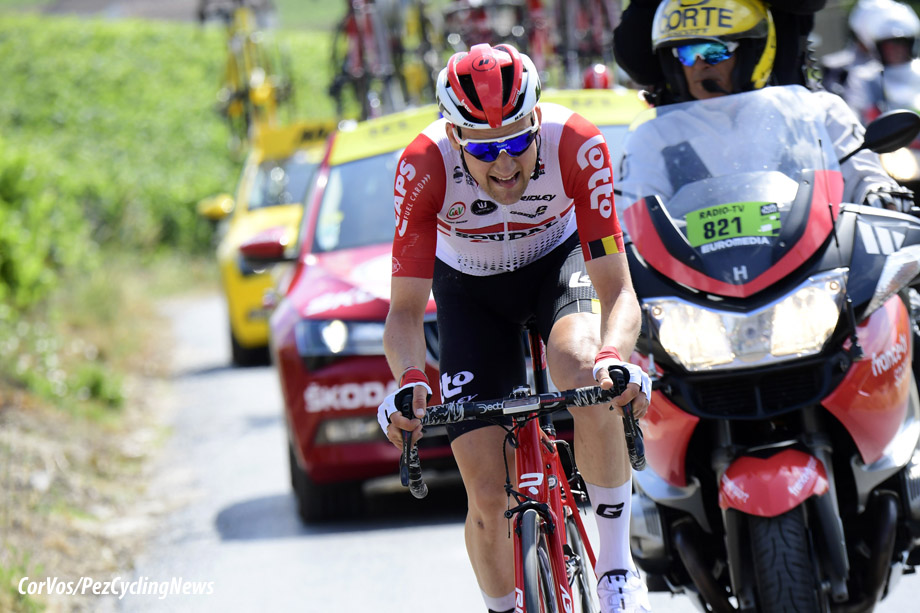 Wellens for the KOM jersey
Wellens – in the vineyards of the Champagne region – soon had the chase group at 1:30 and the peloton at quite a bit more. Wellens took enough points to take the mountain jersey from Greg Van Avermaet (CCC). On the second climb of the day, the Côte d’Hautvillers, Deceuninck – Quick-Step pulled the peloton along with Bora-Hansgrohe, this saw Caleb Ewan (Lotto Soudal) go out the back. The pace that was also too high for the yellow jersey, Mike Teunissen who was at the tail of the peloton. At the front of the peloton Wout van Aert and Steven Kruijswijk were near the front on the Côte de Champillon, hoping to take over the lead. The peloton was considerably thinned out. 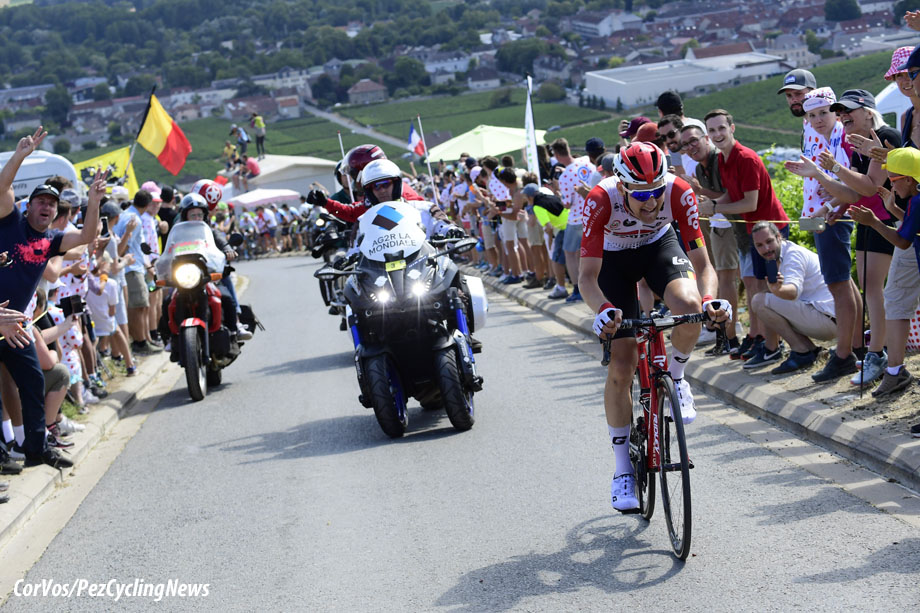 KOM for the Belgian 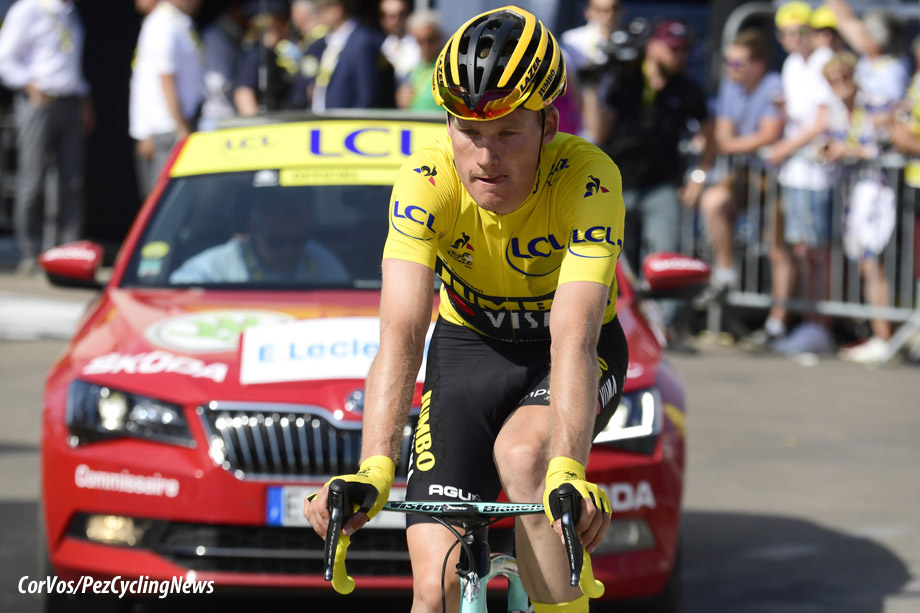 The yellow jersey was in trouble

At the top of the Mutigny, in addition to mountain points, there were bonuses of 8, 5 and 2 seconds. Devenyns kept the pace high for Alaphilippe, who then put in a sharp attack just before the top. Wellens won the sprint and the 8 bonus seconds, Alaphilippe was second. The 2 seconds went to Michael Woods. 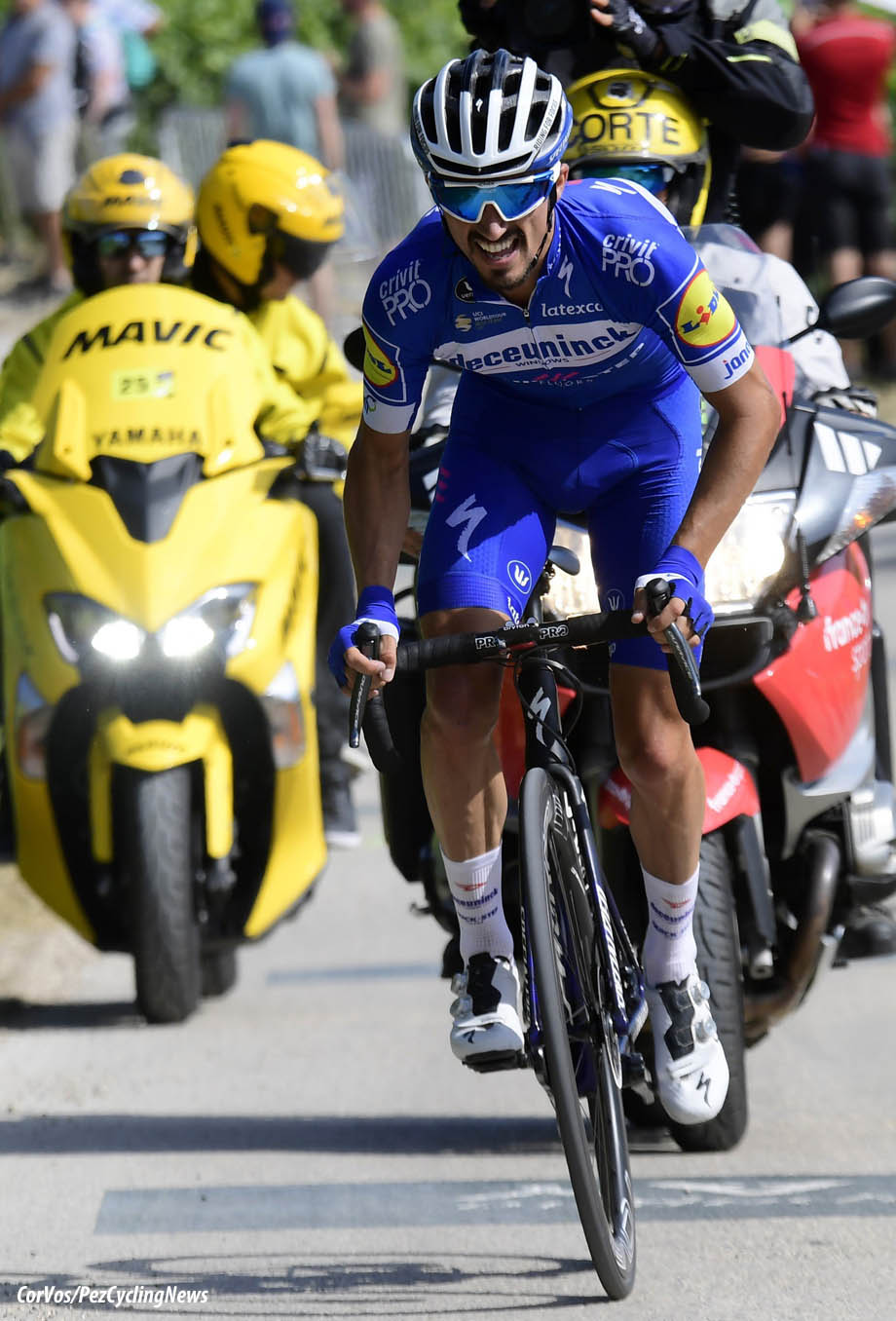 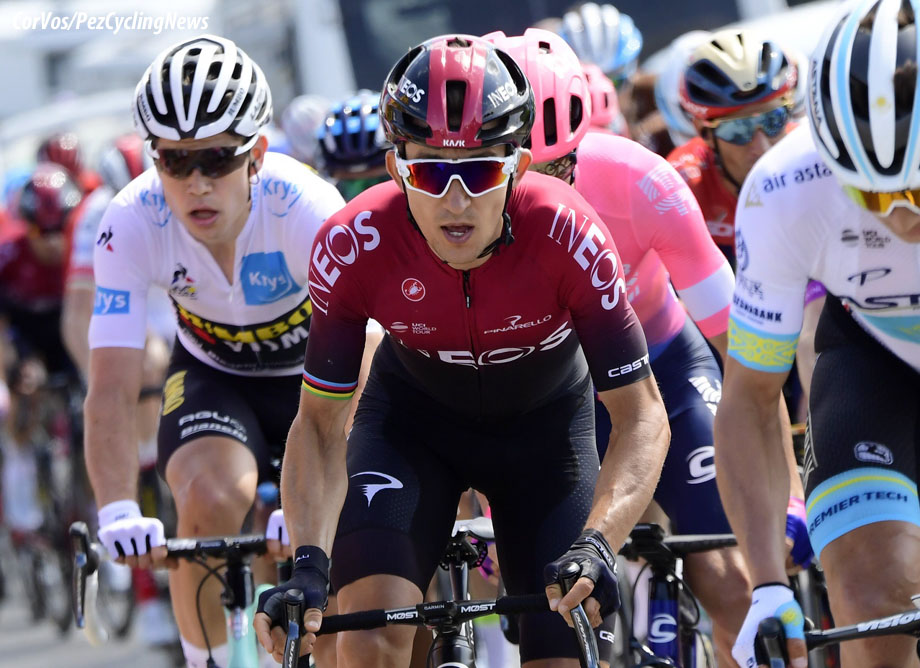 The biggest victims of Deceuninck – Quick-Step’s work were Teunissen and Zakarin, who were dropped. Alaphilippe went on solo with Maximilian Schachmann, Mikel Landa, Michael Woods and Alexey Lutsenko following at 25 seconds. The peloton (led by Jumbo-Visma) rode not far behind, catching the four chasers with 10 kilometres to go. 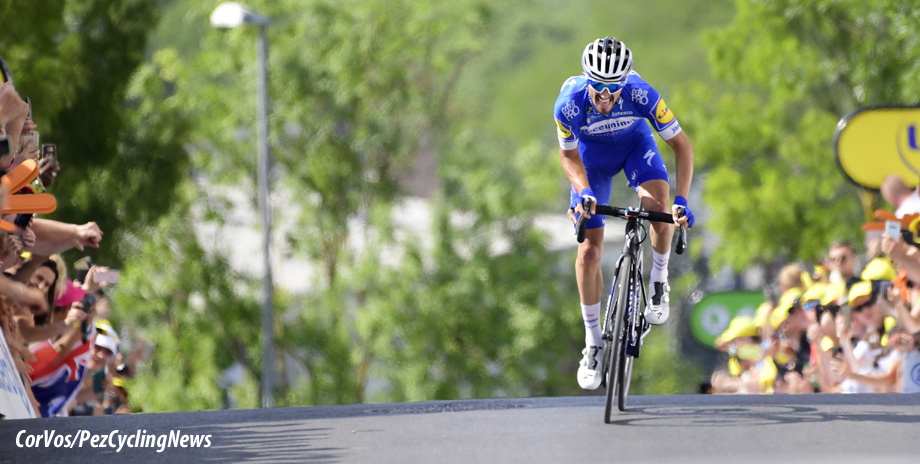 Alaphilippe started the last 8 kilometres with 50 seconds advantage and was in virtual yellow. Mike Teunissen was no longer able to hold the peloton. With a show of strength, Alaphilippe survived the steep climbs to Epernay and with a 26 second lead he crossed the finish line, and due to the bonuses en route and at the finish, he also took the yellow jersey. Michael Matthews (Sunweb) sprinted to 2nd place, ahead of Jasper Stuyven (Trek-Segafredo) and Greg Van Avermaet (CCC). 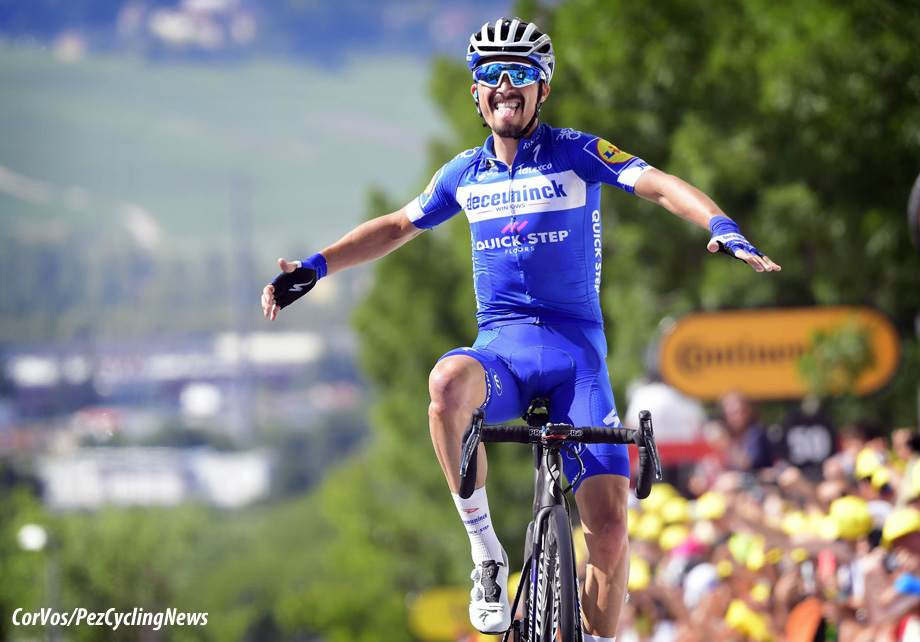 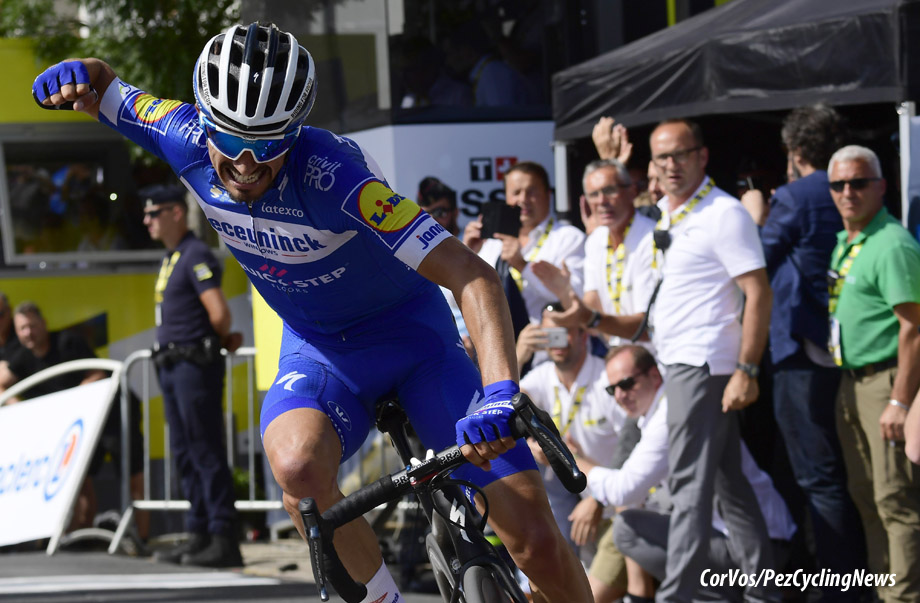 Stage and yellow for the Frenchman

In the peloton there was a gap of 5 seconds after the 12th placed rider. Thibaut Pinot and Egan Bernal were the classification men on the right side of that gat. Geraint Thomas, Jakob Fuglsang and Steven Kruijswijk, and others, finished in the top 20, but lost 5 seconds. 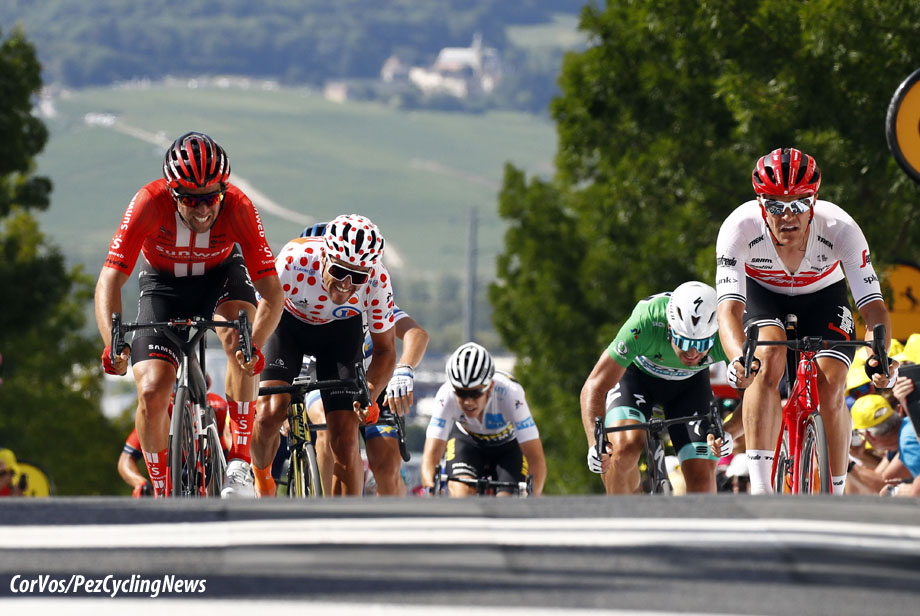 Alaphilippe now has a 20 second lead on the overall over Wout van Aert and 25 seconds over Steven Kruijswijk and George Bennett. Teunissen also lost the points jersey. Peter Sagan is now the ‘real’ wearer of the green. Tim Wellens is KOM and Wout van Aert keeps the white for the best young rider. 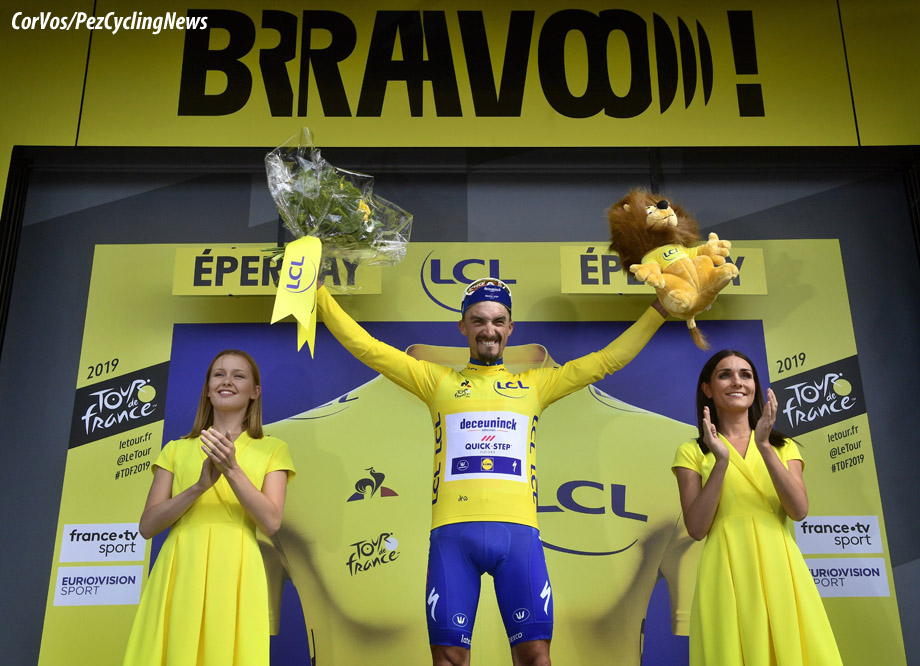 Stage winner and overall leader, Julian Alaphilippe (Deceuninck – Quick-Step): “I’m speechless. I don’t realise what’s happening to me. I knew this stage suited me. I managed to avoid any pitfalls and crashes. I felt good so I accelerated in the Mutigny climb but I didn’t think I’d go alone. I gave everything. I heard I was 30 or 40 seconds ahead. It’s difficult to meet the expectations being the favourite. I made it. I’m delighted.”

Wahoo Announces Acquisition of The Sufferfest