Stage Report: On the tough finalé of stage 6, Dylan Teuns fought his way over the gravel road to cross La Planche des Belles Filles finish line first. The Bahrain-Merida rider defeated his Italian co-escapee, Giulio Ciccone (Trek-Segafredo) after an exciting duel. The Italian maybe didn’t win the stage, but he captured the yellow jersey from Julian Alaphilippe (Deceuninck – Quick-Step) by 6 seconds. Of the favourites; Geraint Thomas (Ineos) was the winner of the day. 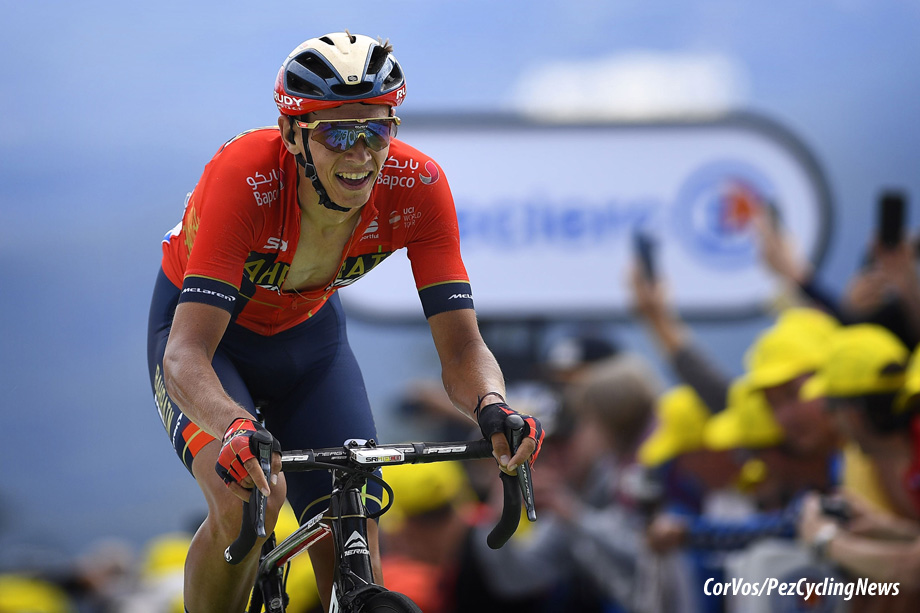 A hard fight for Dylan Teuns

It had to happen today for the classification riders. The second and final stage through the Vosges mountains, crossing famous cols such as the Grand Ballon and the Ballon d’Alsace, but the race was looking forward to the 8.7-kilometre final climb of La Planche des Belles Filles with an unpaved section of 900 meters. Could Julian Alaphilippe rise above himself and keep the yellow jersey? No… 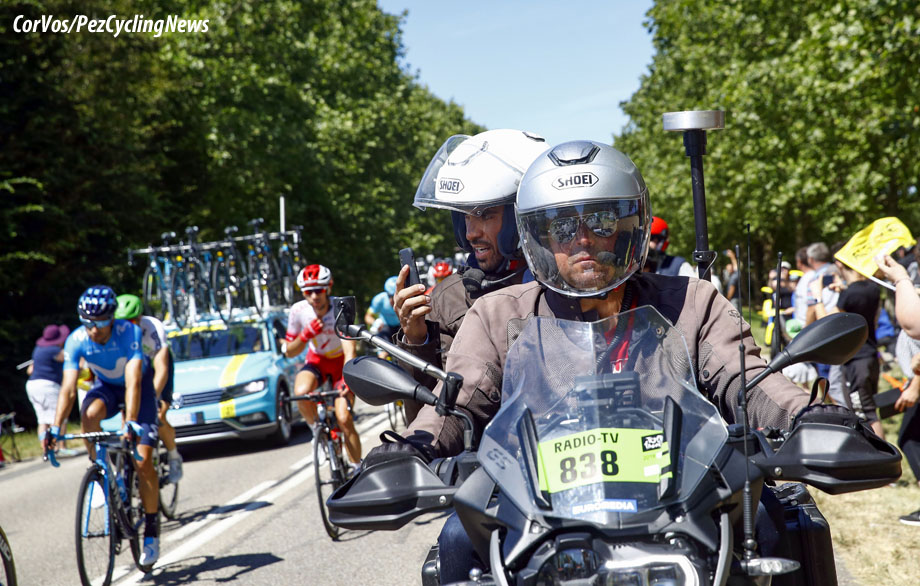 Multi Grand Tour winner, Alberto Contador, has been out on the course

Deceuninck – Quick-Step manager, Patrick Lefevere on the final climb: “Unpaved roads? 24%? It’s mountain biking. If professional riders do not arrive at the top of a pass in a ‘normal’ way, it does very little for me. It’s circus not sport.” Thibaut Pinot (Groupama-FDJ) is undoubtedly the one who knows this climb the best: “The last kilometre, which they added, is very hard, especially the last 200 meters, but the surface, even if it is white path, is clean. Men in shape will be ahead, impossible to race without being strong… she does not forgive.” By the end of the day the overall will look very different. 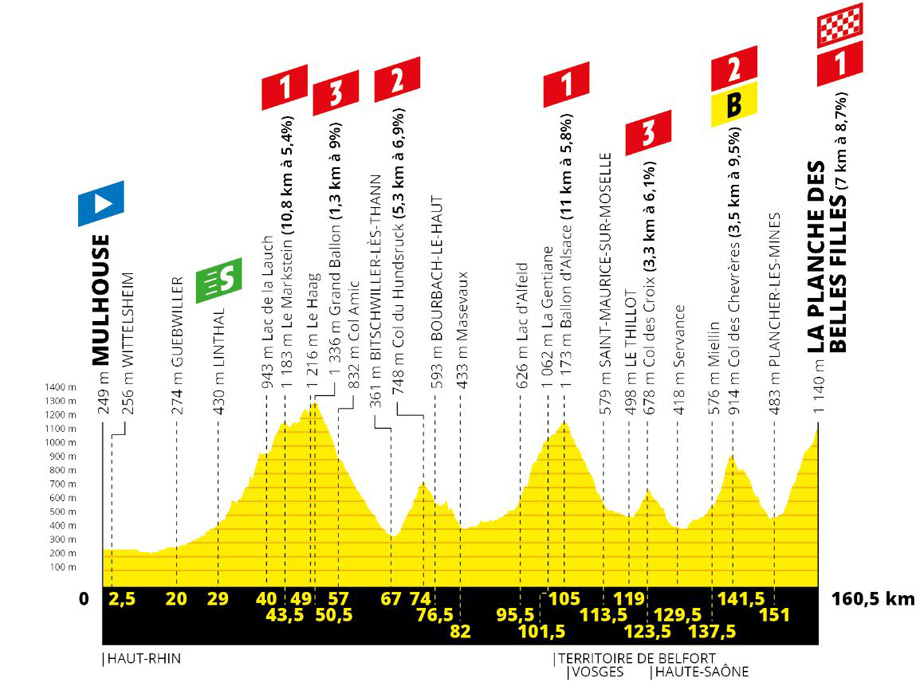 CCC’s Patrick Bevin did not start stage 6 after X-rays confirmed two fractured ribs sustained in a crash on stage 4. Bevin crashed with around 100 kilometres to go on Tuesday, but was able to finish the stage and line up on stage 5, however, his pain increased during yesterday’s stage. CCC Team Chief Medical Officer Dr. Max Testa said it would be detrimental to Bevin’s health to continue racing. Bevin said this morning: “I fell on my left side and caught a wheel to the chest. I thought I had got away with it at the time and I didn’t have any trouble when I got back into the race, no skin off or anything like that. I thought it wasn’t too bad but as the stage wore on, it got worse. So we went straight to get X-rays after the stage, which confirmed the rib fractures. You have to take the emotion out of it, the fact that it is the Tour de France, and make a rational decision. Two fractured ribs are not going to get better overnight.” 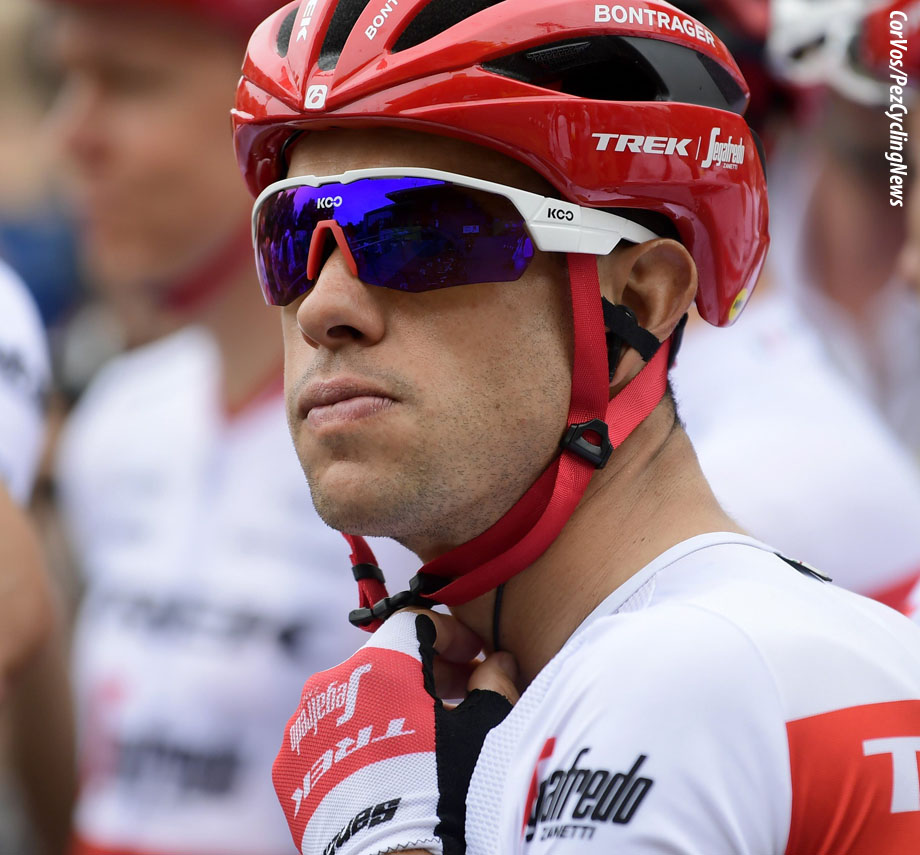 At the start, Richie Porte must have hoped to show his form today 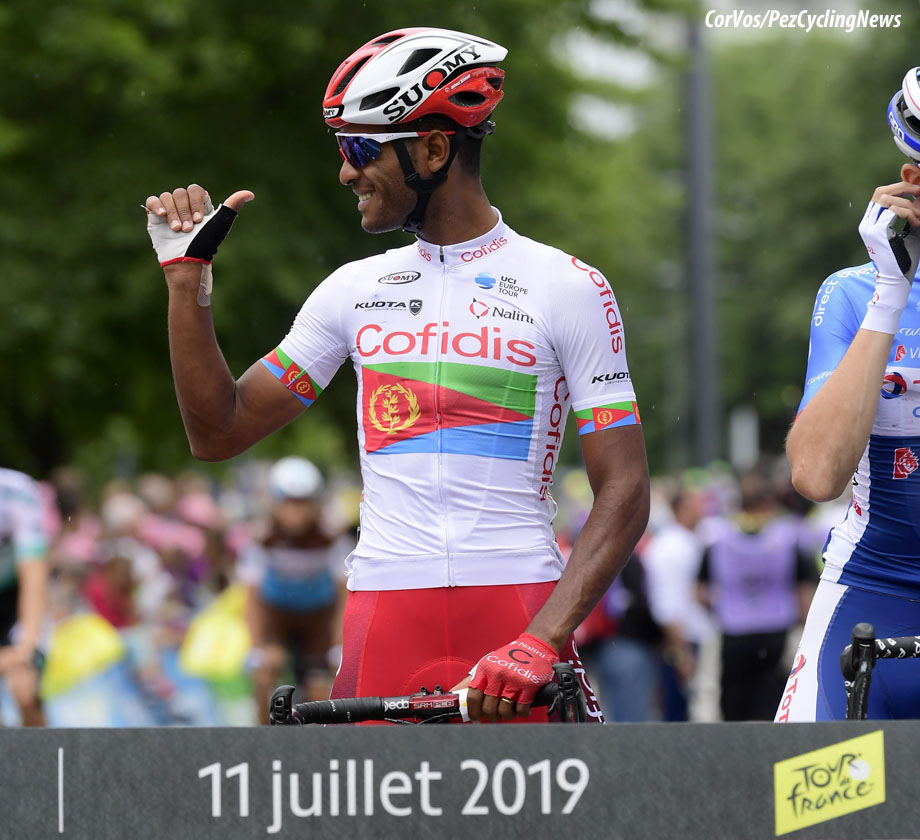 A big day ahead for Natnael Berhane

A large number of riders were interested in the early break escaping before the first climb of the day; Le Markstein. After 10 kilometres the group was settled for the ‘Break of the Day’. 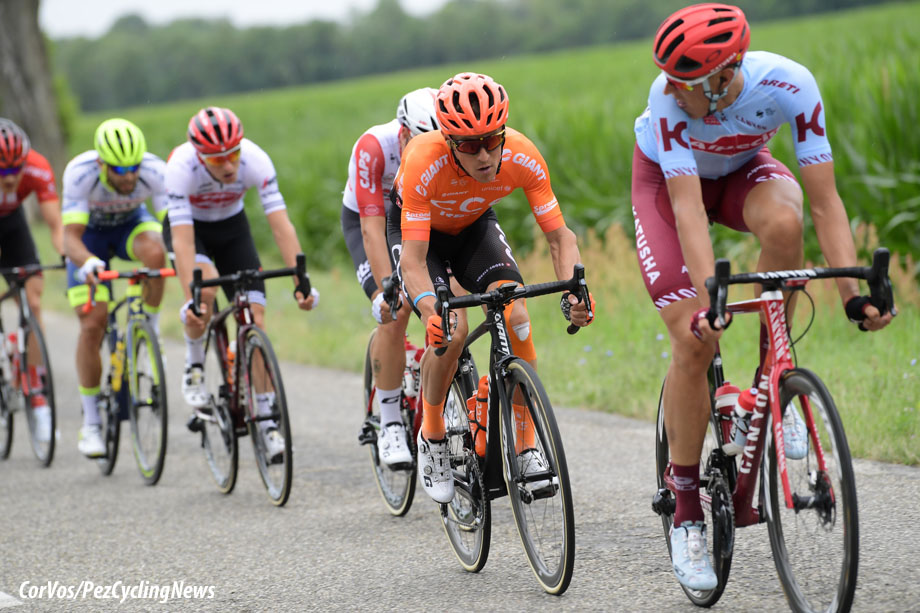 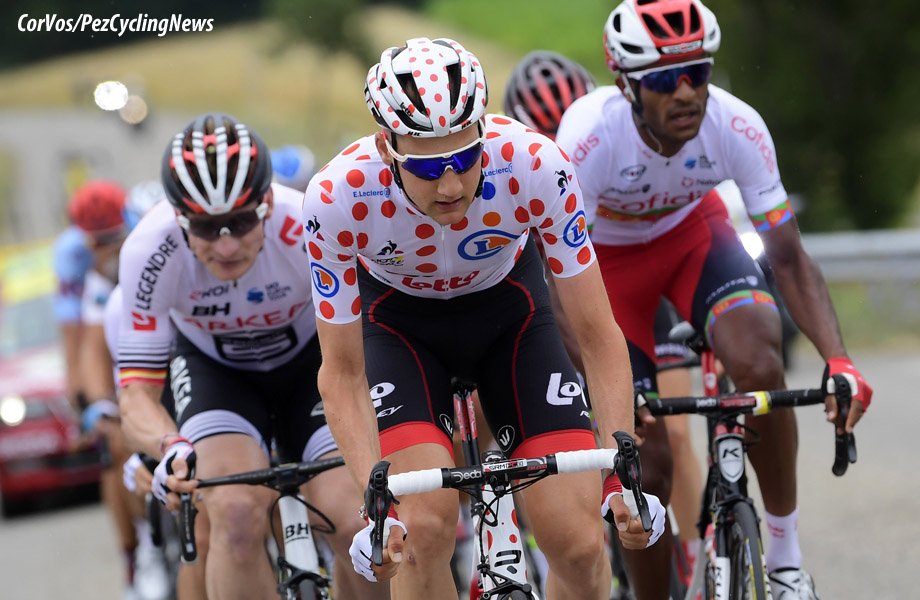 KOM Tim Wellens (Lotto-Soudal) had to be there for the points. Joined by André Greipel (Arkea-Samsic) and Natnael Berhane (Cofidis) 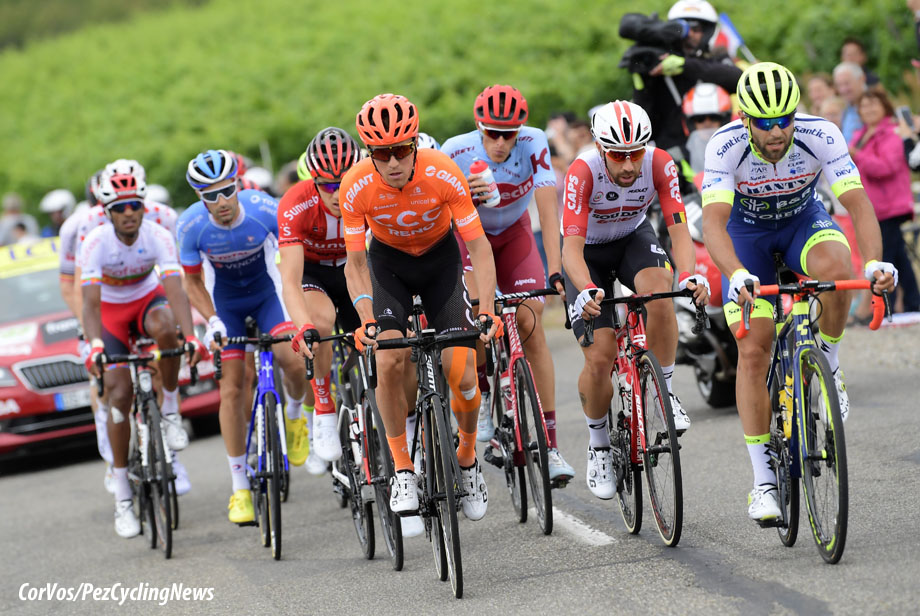 Serge Pauwels (CCC), Thomas De Gendt (Lotto Soudal and Andrea Pasqualon (Wanty-Gobert) – All part of the break of the day 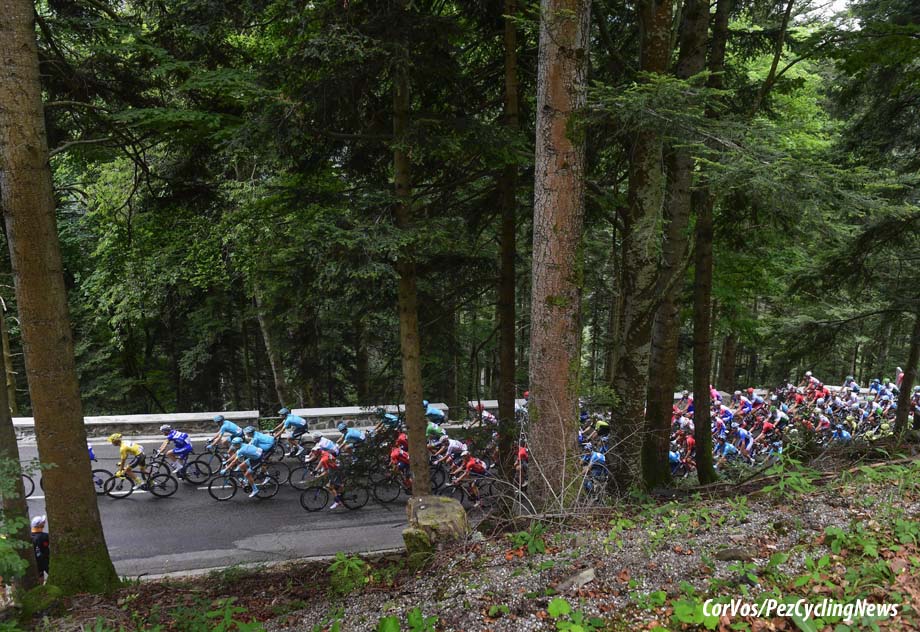 Deceuninck – Quick-Step controlled the peloton for most of the day

The peloton soon let the lead group go, the gap soon grew to a maximum of 7 minutes. This allowed Ciccone to be the overall leader on the road, since the Italian started the stage only 1:43 down on the yellow jersey wearer. Alaphilippe’s Deceuninck – Quick-Step team led the pack, but Kasper Asgreen and Maximiliano Richeze didn’t try too hard. 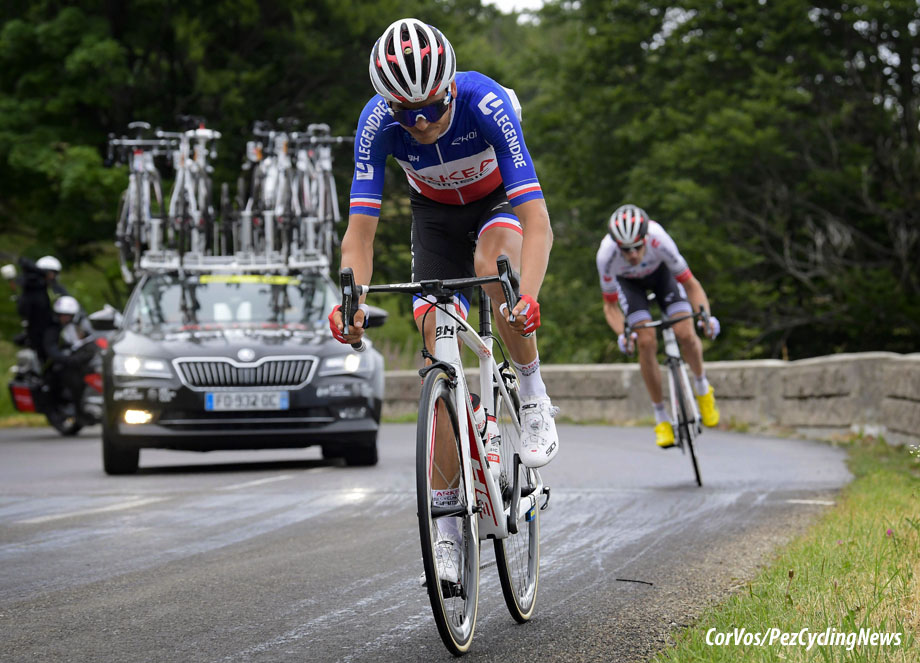 French champion, Warren Barguil, had a wheel change and a chase

At the first and only intermediate sprint: Pasqualon took the points, from Politt and Greipel. They then started the 11 kilometre long Le Markstein, and it was Wellens who was first for 10 points. On the Grand Ballon (Cat. 3) another Belgian grabbed the points, this time De Gendt. 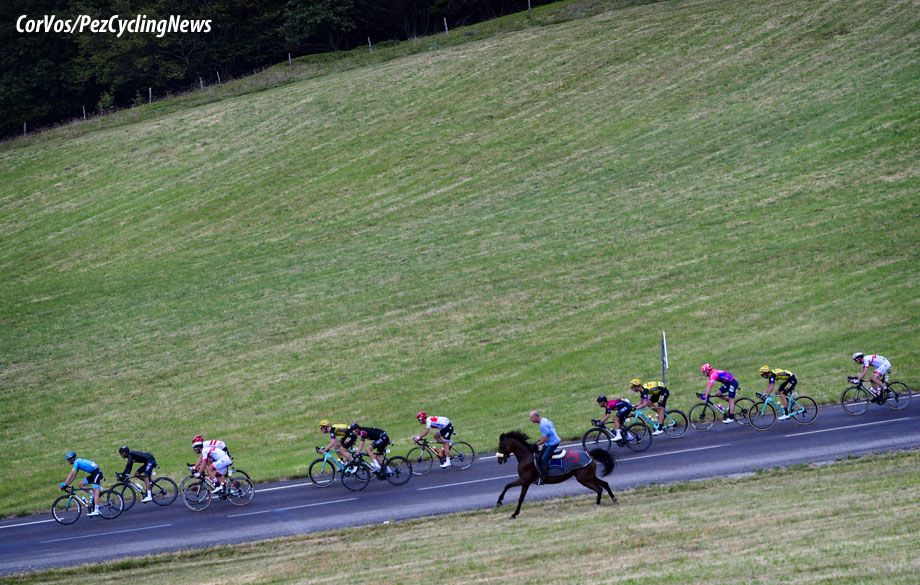 Wellens continued to gather points for his polka dot jersey, although Berhane managed to beat him on the Col du Hundsruck (Cat. 2). In the peloton they were happy with the situation, making it seem a fairly easy-going stage. We had to wait for the Col des Chevrères and the final climb to La Planche des Belles Filles for some action, because on the notorious Ballon d’Alsace there was little urgency from the peloton, although Movistar took over from Deceuninck – Quick-Step. 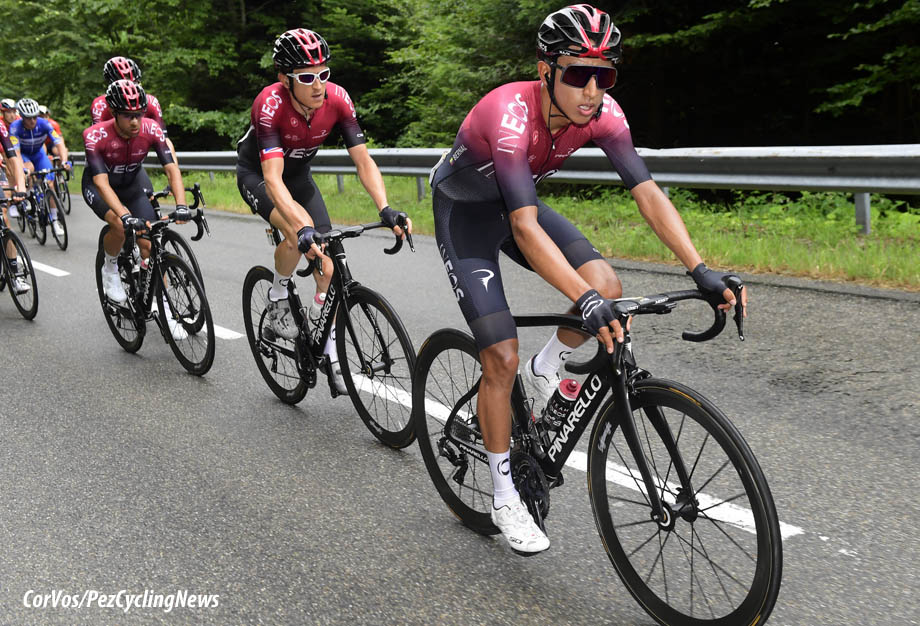 Movistar and Bora-Hansgrohe take over
At the front Wellens was the first over the top of the Ballon d’Alsace, which earned him another 10 points. The escape still had a 7 minute lead, but suddenly Movistar and Bora-Hansgrohe started to ride hard behind. This caused the pace to rise and a small split in the peloton appeared. Wilco Kelderman and Ilnur Zakarin, among others, were in trouble. 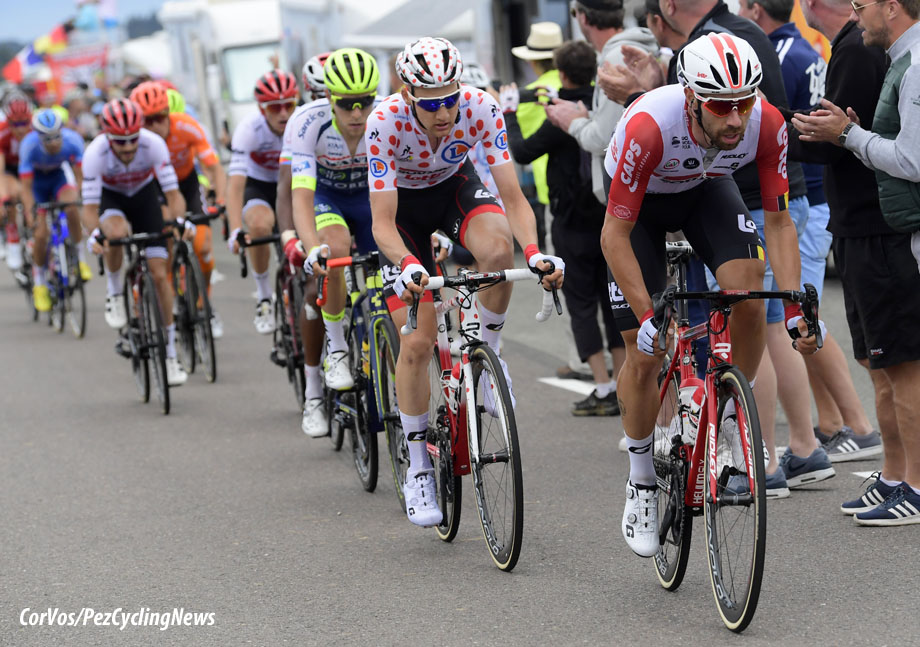 The closer the riders came to the Chevrères, the peloton became more jumpy. At the front the group was starting to split, which allowed De Gendt to go solo. The Lotto Soudal rider went full steam ahead after the Col des Croix, and crossed the summit 30 seconds ahead of his pursuers. De Gendt started the penultimate climb of the day, the Chevrères, with half a minute in hand. 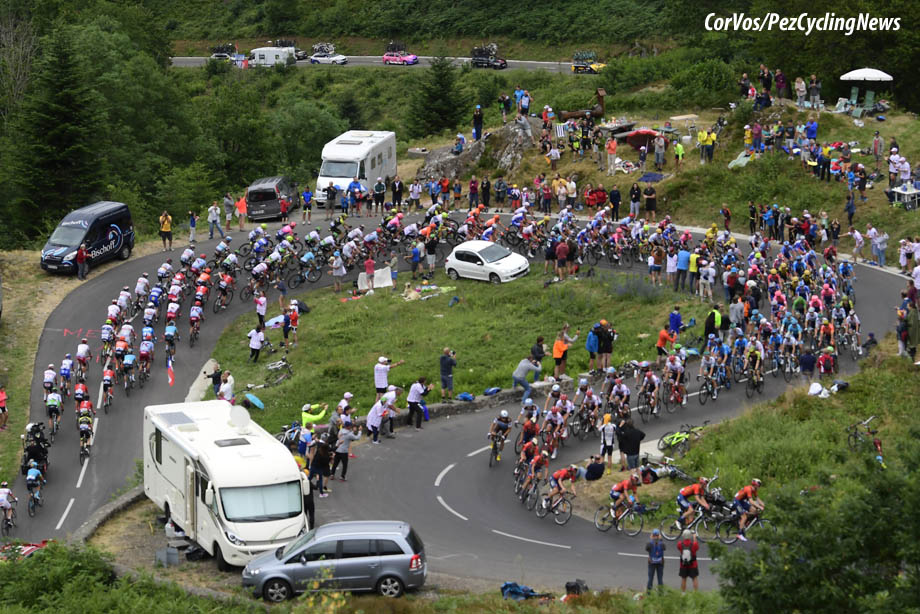 The peloton was waiting for the final climb

Thirty seconds was not enough on the Chevrères (Cat.2), with its maximum ramps of no less than 18%. De Gendt started to zigzag more and more and was caught before the top and left behind by the better climbers: Teuns, Meurisse, KOM Wellens and Ciccone. It was the Italian who grabbed the mountain points and 8 bonus seconds. Meanwhile the peloton had been considerably thinned. World champion, Alejandro Valverde, decided to work for his Movistar leaders Mikel Landa and Nairo Quintana, which meant that more and more riders were dropped. The first “favourite” to go was Tejay van Garderen. The second placed rider of the Critérium du Dauphiné was completely finished. 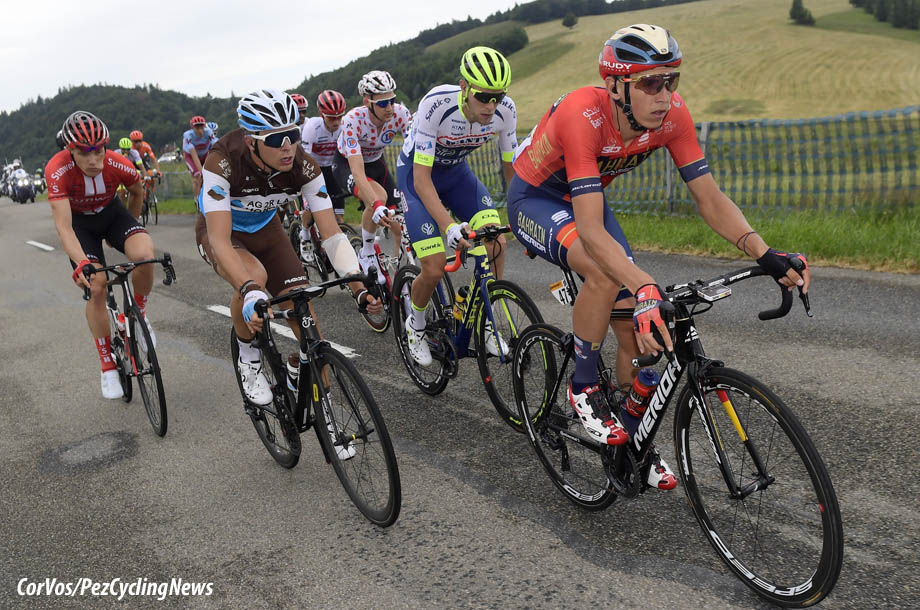 Teuns wins a long game
The other classification riders were able to follow the pace of Valverde, so it all had to happen on La Planche des Belles Filles. We had a fight on two fronts, because Ciccone, Teuns, Wellens and Meurisse started with a nice lead of 4 minutes on the last climb of the day. The four front runners initially held back, out of respect for the 7 kilometre long final climb. 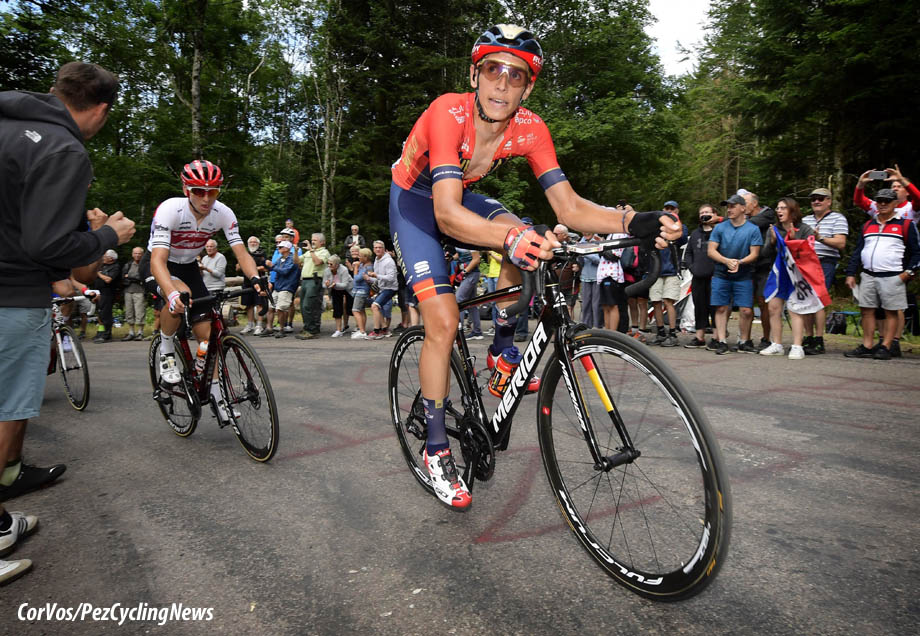 Teuns was the strongest in the group, but Ciccone managed to hold on

Wellens was the first to drop out at more than 4 kilometres from the top. The KOM would not win the stage, just like Meurisse, who soon had to ride at his own pace. It was Ciccone who put on the pressure, but Teuns was able to follow Trek-Segafredo’s jump. So we had a battle for the stage victory. On the gravel section; Teuns tried to ride his Italian companion off his wheel, but Ciccone was tough. Teuns still had an acceleration in store, which forced the Italian to give up just before the line, but with the knowledge he might have the overall lead, depending on the action behind. 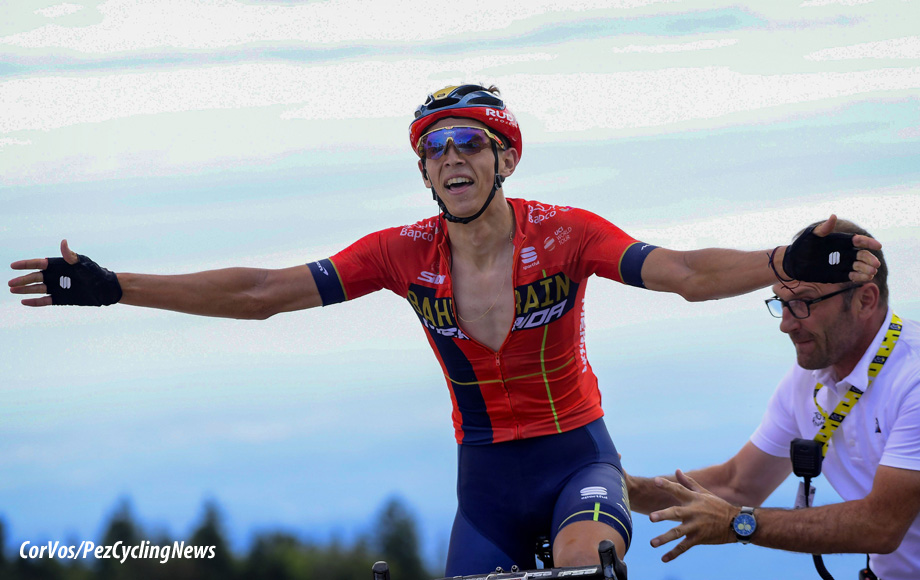 Stage winner, Dylan Teuns (Bahrain-Merida): “It’s unbelievable. I knew since the Dauphiné that I was in good shape but to win at the Tour de France already this week is incredible. I didn’t expect to win here although I knew there was a chance for the breakaway to succeed today. I took my opportunity. In the second last climb, the four strongest came out from the breakaway. I knew Ciccone was the main guy. I’m so happy I finished it off. At the bottom of a climb, I saw my mum, my dad and my girlfriend. It brought me a lot of emotions.” 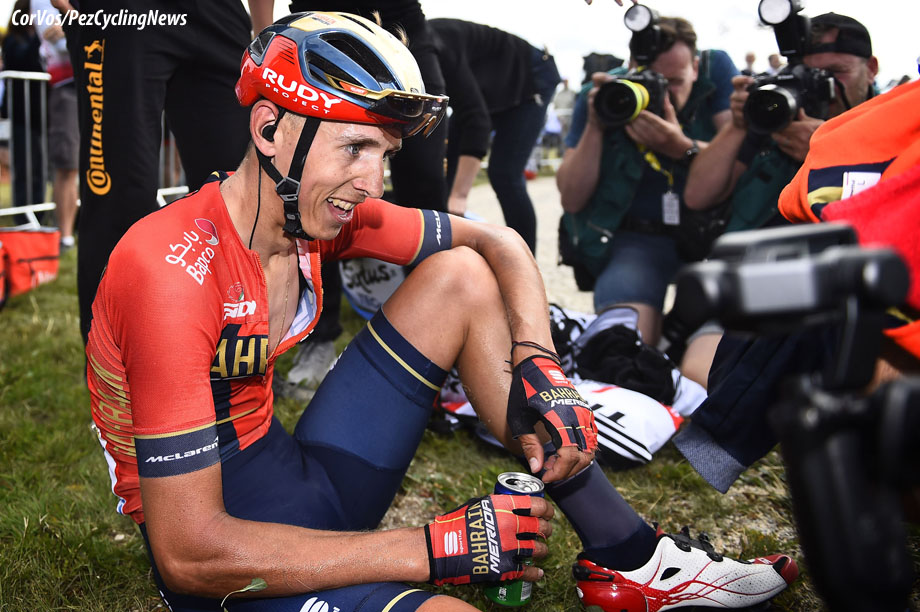 What about the favourites? Movistar and Valverde tried to make the race as hard as possible, but no one was willing to try anything. In the end it was French champion Warren Barguil who put in an attack, which was countered by Mikel Landa almost immediately. The acceleration of the Spanish climber was strong, but Team Ineos did not panic and were watching all the moves. 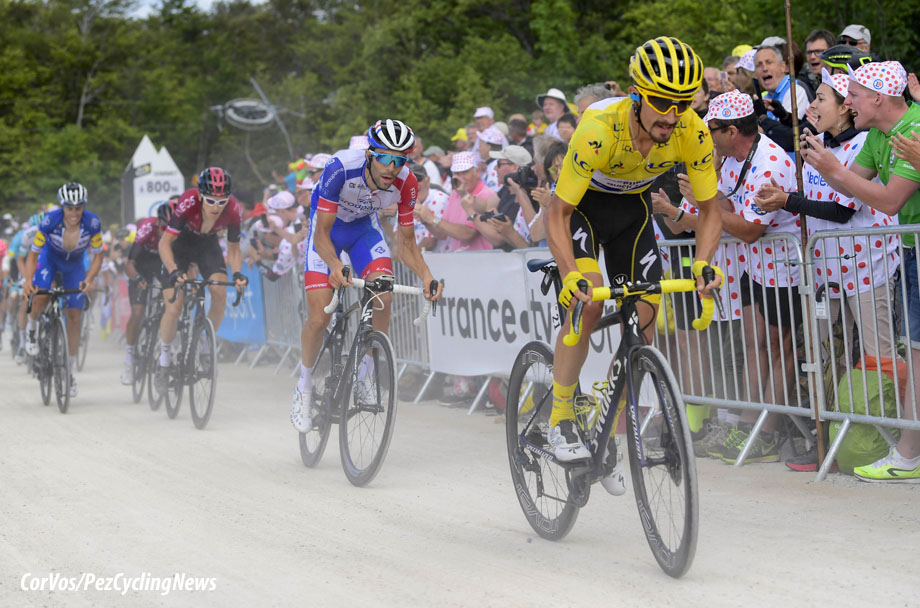 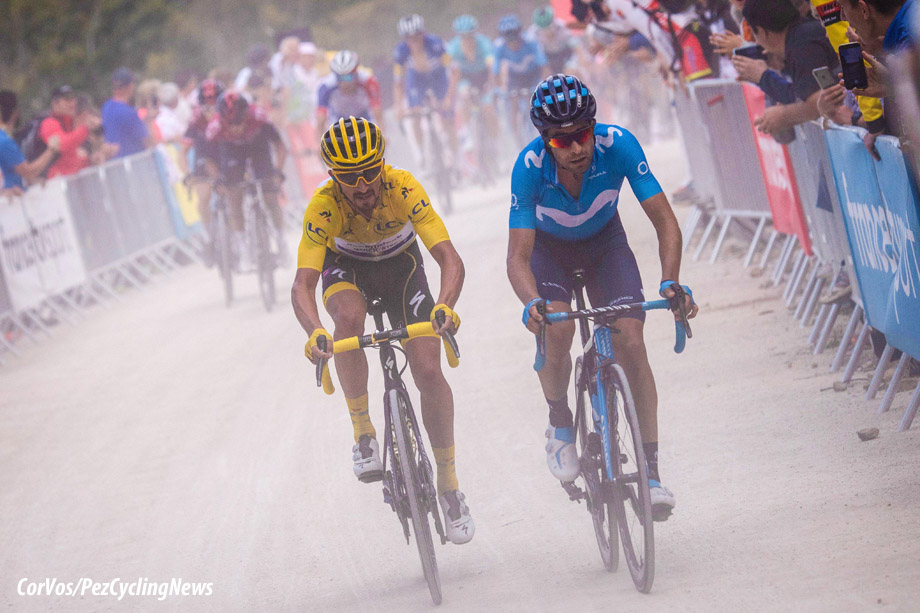 Young Frenchman David Gaudu rode hard for his leader and the home favourite Thibaut Pinot. The pace by Gaudu was very high, so Landa was soon caught. This was the signal for the yellow jersey of Alaphilippe to accelerate in the hope of defending his lead. The Frenchman seemed to be on his way to saving the jersey, but Geraint Thomas jumped up to the Frenchman with Pinot on his wheel. We now have a new overall leader and the race has taken another turn. 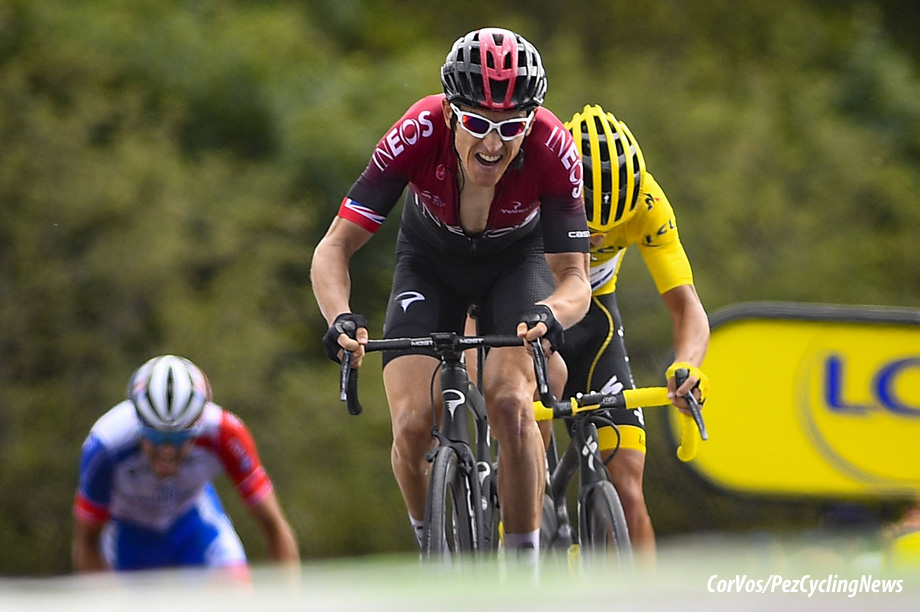 With a late jump Thomas past Alaphilippe just before the line

Overall leader, Giulio Ciccone (Trek-Segafredo): “The yellow jersey was my childhood dream. Today I made it come true. It’s a beautiful achievement. It’s hard to believe. My goal and our team’s goal was to win the stage. I was pissed off that I lost the stage win but when I realised that I had the yellow jersey, the feeling of anger passed straight away. It’s wonderful. The Giro was my first goal of the year but as I came out of it with a great condition, we decided with the team that I’d do the Tour as well, for experience at the age of 24. I started even better than we imagined. We have a strong team to defend the jersey even though flat stages at the Tour de France are hard as well.” 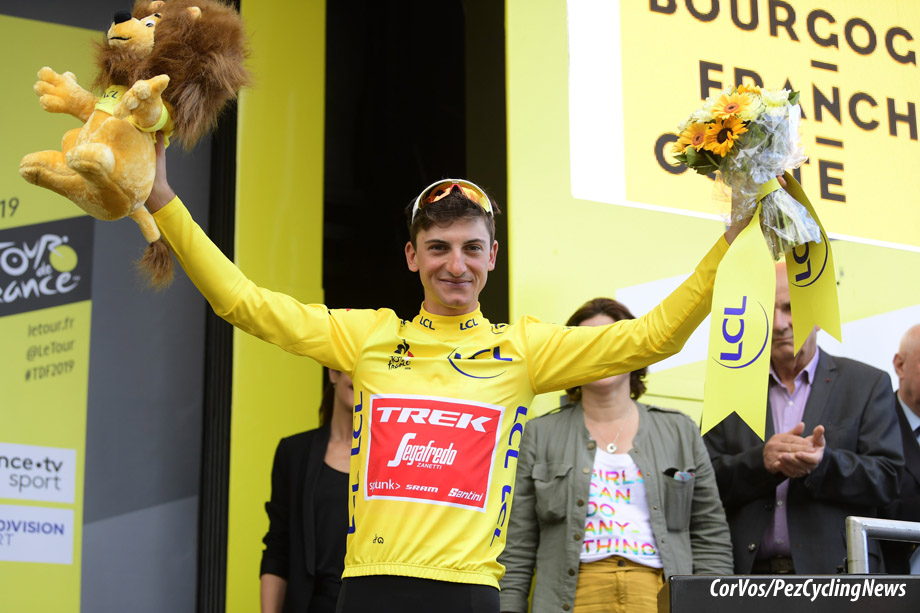