Stage Report: The longest stage of the 2019 Tour de France came down to a bunch sprint in Chalon-Sur-Saône. All the fast-finishers were present for the final battle after 6 hours in the saddle. In a close call, the powerful Dutchman, Dylan Groenewegen (Jumbo-Visma) got the nod from the judges just ahead of Lotto Soudal’s Caleb Ewan and points leader, Peter Sagan (Bora-Hansgrohe). Trek-Segafredo’s young Italian, Giulio Ciccone, held his overall lead. 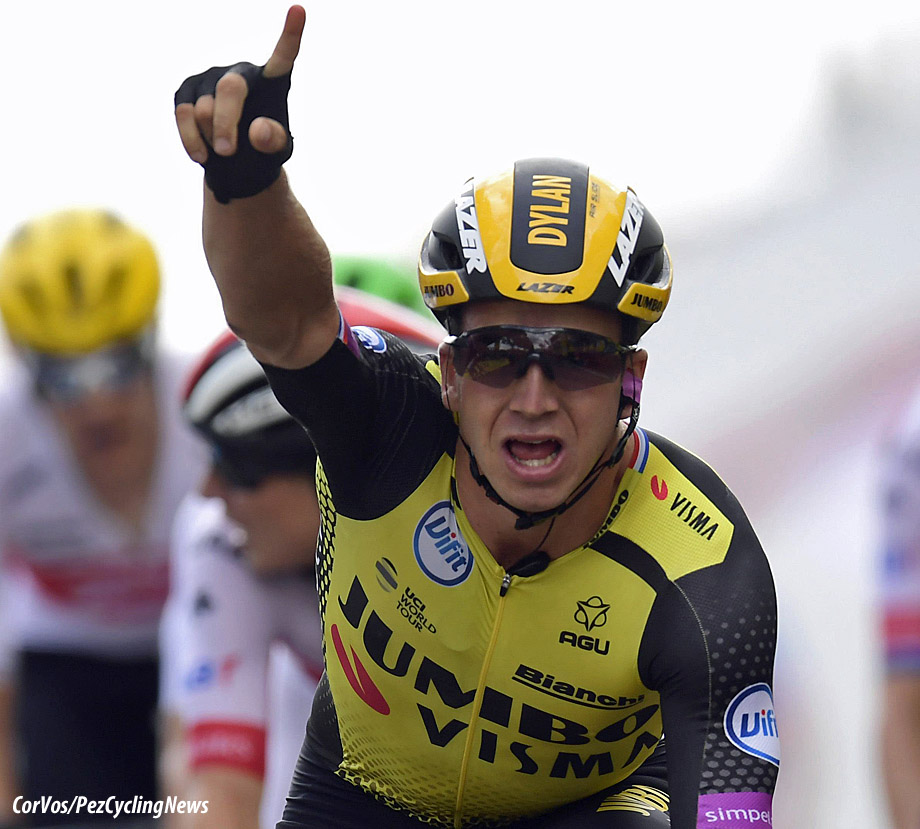 We saw a new face in the yellow jersey today: Giulio Ciccone. He was part of the escape yesterday, in which he was the strongest along with Dylan Teuns. On the steep flanks of La Planche des Belles Filles, the Italian had to leave the win to his Belgian companion, but with the overall lead he did not leave stage six empty-handed. Under sunny conditions, the starting signal was given for stage 7. 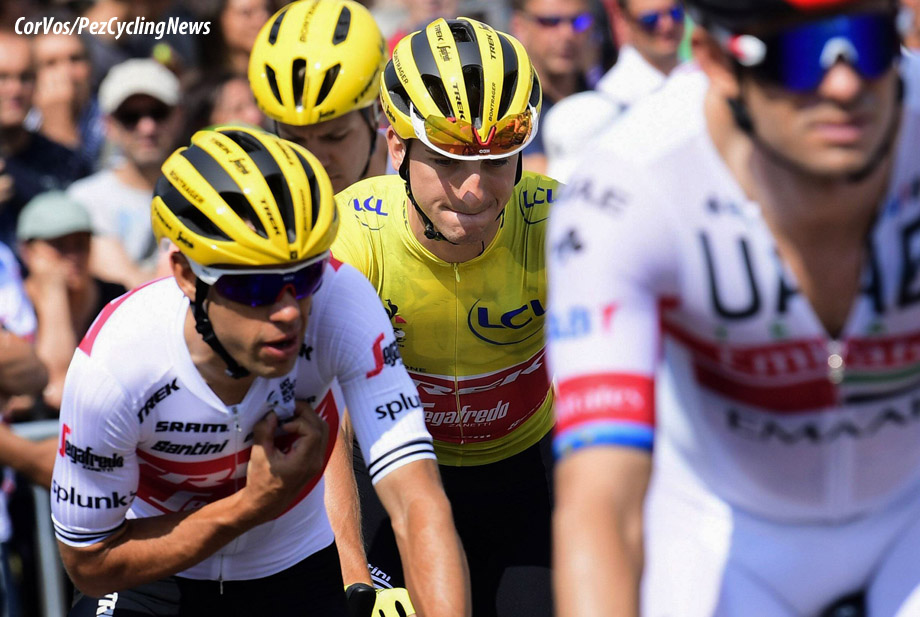 Stage 7 Route:
The longest stage of the 2019 Tour de France. 230 kilometres from Belfort to Chalon-Sur-Saône, probably a day for the sprinters. The climbs of the day: The Col de Ferrière (2.7km at 4.6%) and the Côte de Nans-sous-Saint-Anne (3.5km at 5.7%), both Cat. 4, plus the Côte de Chassange-Saint-Denis (4.3km at 4.7%). There are 110 kilometres of flat roads from the last climb to the finish. The intermediate sprint in Mervans is 34 kilometres from the finish line in Chalon-Sur-Saône and there is nothing to cause a problem for the sprinters, except themselves. 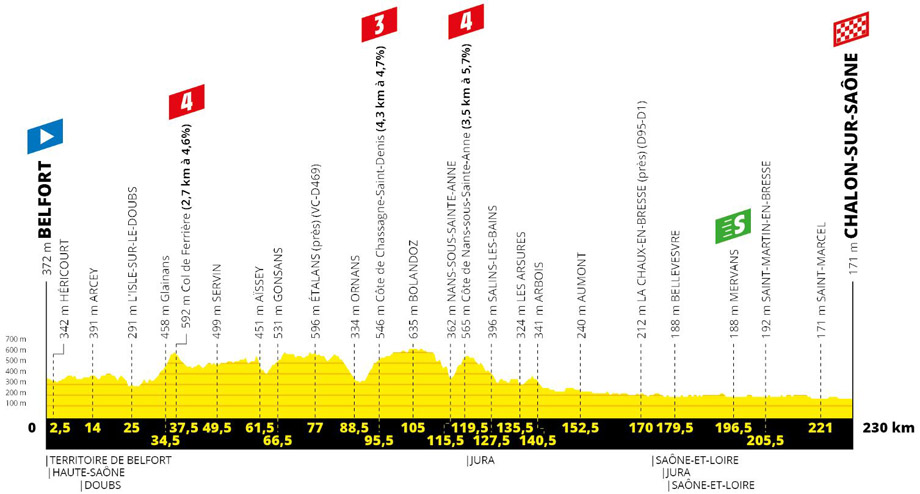 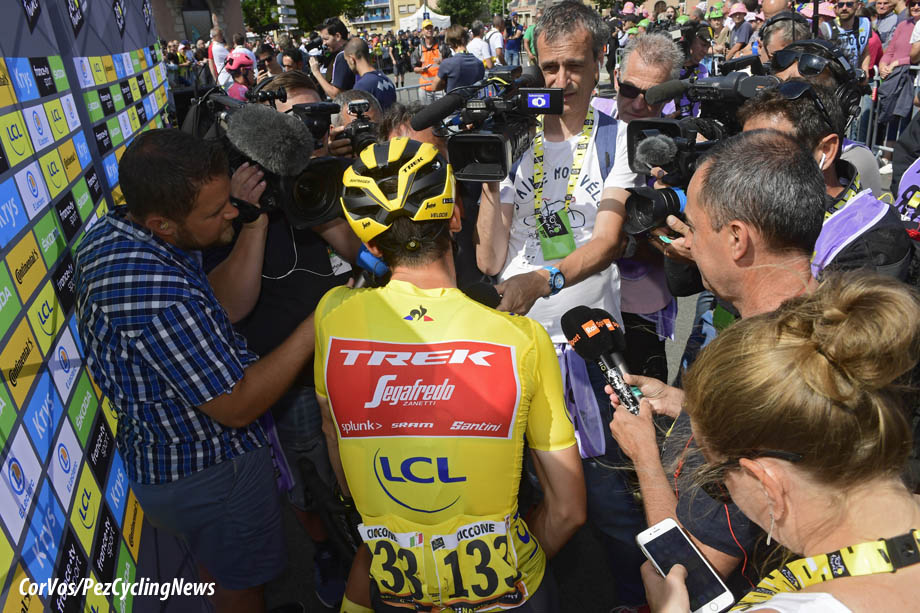 The young Italian was the centre of attention at the start 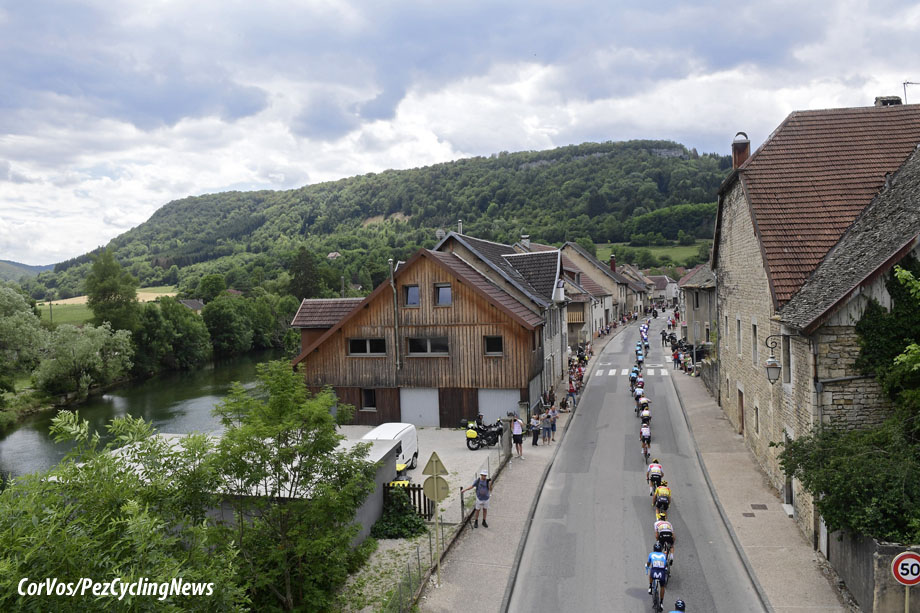 It was going to be a long day in the saddle

Rossetto and Offredo make the break
Although the riders had 230 kilometres to cover today, that did not deter Stéphane Rossetto (Cofidis) and Yoann Offredo (Wanty-Gobert) from attacking from the gun. Offredo seemed to be in doubt at first, when he saw that the other riders were not interested, the Frenchman started to work with his fellow countryman, Rossetto. They immediately took a good gap as they were no danger on the general classification. 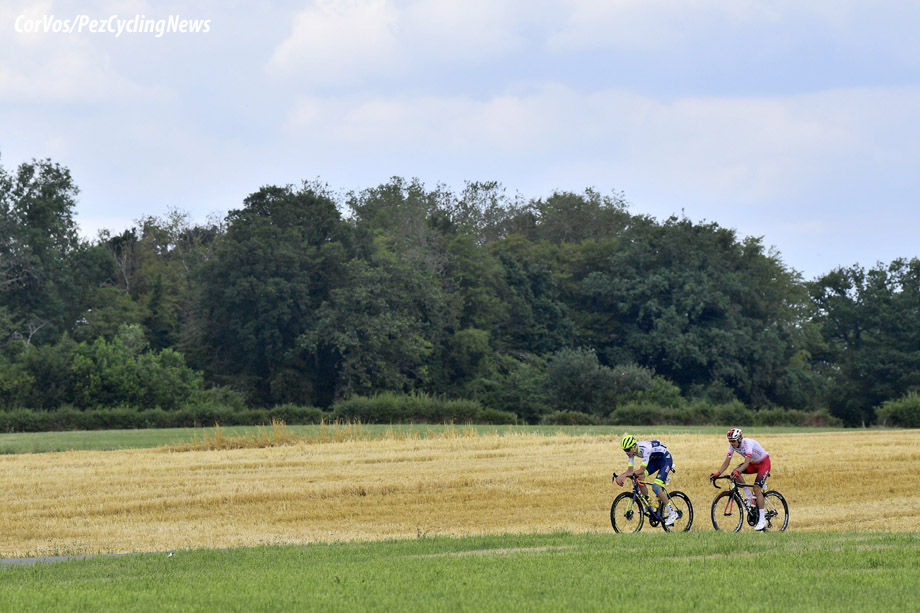 Mike Teunissen, winner of the first stage wearer of the yellow jersey for two days, and Tejay van Garderen both crashed on a junction. The EF Education First rider had a bad injury to his face, but both could continue and reconnected with the peloton. 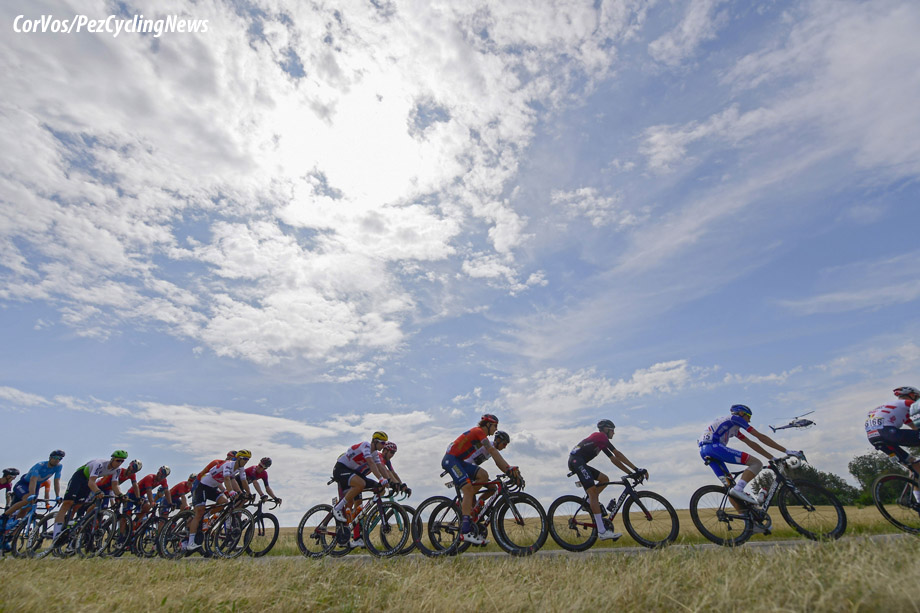 The peloton were happy to let the pair go, but not too far

The bunch took it easy, so Rossetto and Offredo started the first climb after 35 kilometres, the Col de Ferrière, with a lead of more than 5 minutes. Offredo was the first over the summit taking the only mountain point. After that the sprinter’s teams reduced the advantage to a stable 4 minutes. On the Côte de Chassagne-Saint-Denis after 95.5 kilometres, Rossetto was first. 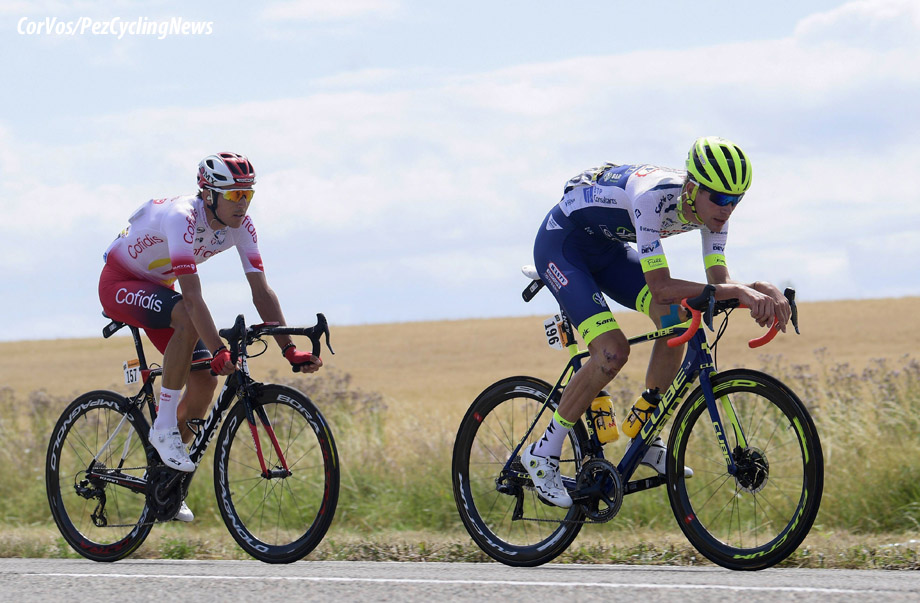 Jumbo-Visma and Deceuninck-Quick Step in control
Sunweb also had a crash. Nicholas Roche went over his bars, but was able to hook up again, just like Teunissen and Van Garderen. For the peloton, Jumbo-Visma and Deceuninck – Quick-Step set the pace. Both teams have already won stages and kept the leading duo within reach to eventually bring their sprinters into position for the gallop to the line. 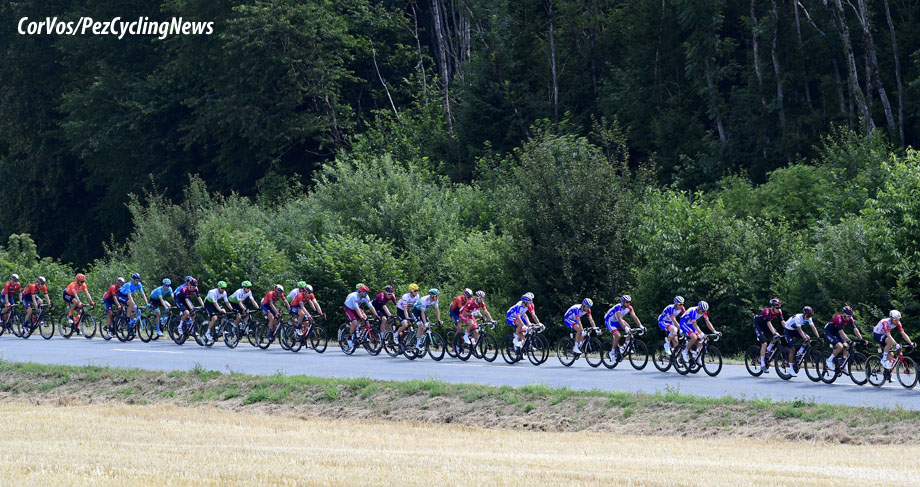 Offredo was the first over the Côte de Nans-sous-Sainte-Anne with still 110 kilometres to go. In the following kilometres, the peloton began to seriously reduce the lead. Lotto Soudal also began to help with the pursuit for Caleb Ewan. With only a margin of 1:45, Rossetto and Offredo started the last 50 kilometres. 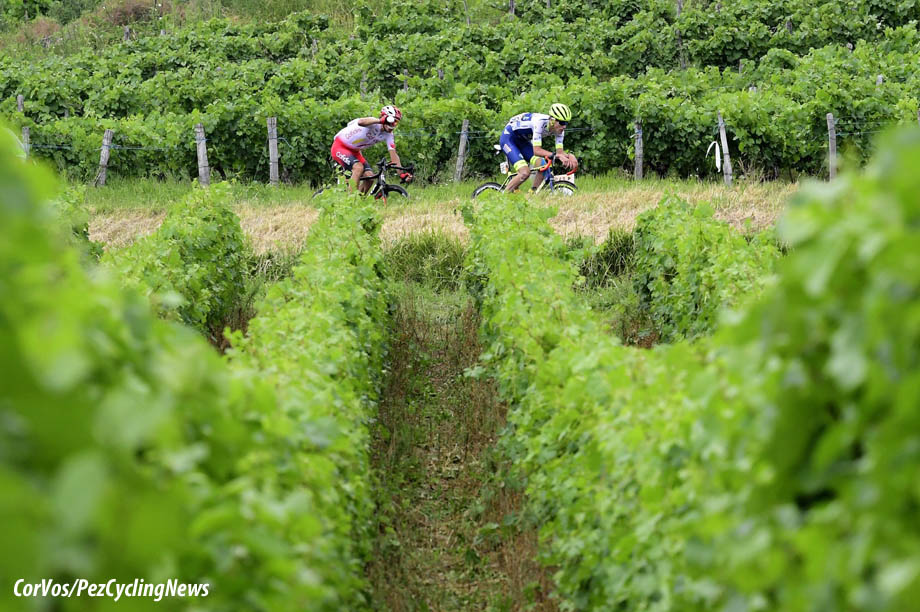 At the sprint, with 34km to go, the pair had less than one and a half minutes

The intermediate sprint, 33.5 kilometres from the finish in Mervans, went to Rossetto. In the peloton, Bahrain-Merida and Sonny Colbrelli had set their sights on the sprint. The team put no less than three riders on the front for their sprinter, who did not disappoint. The Italian took it ahead of Peter Sagan, Elia Viviani and Michael Matthews. 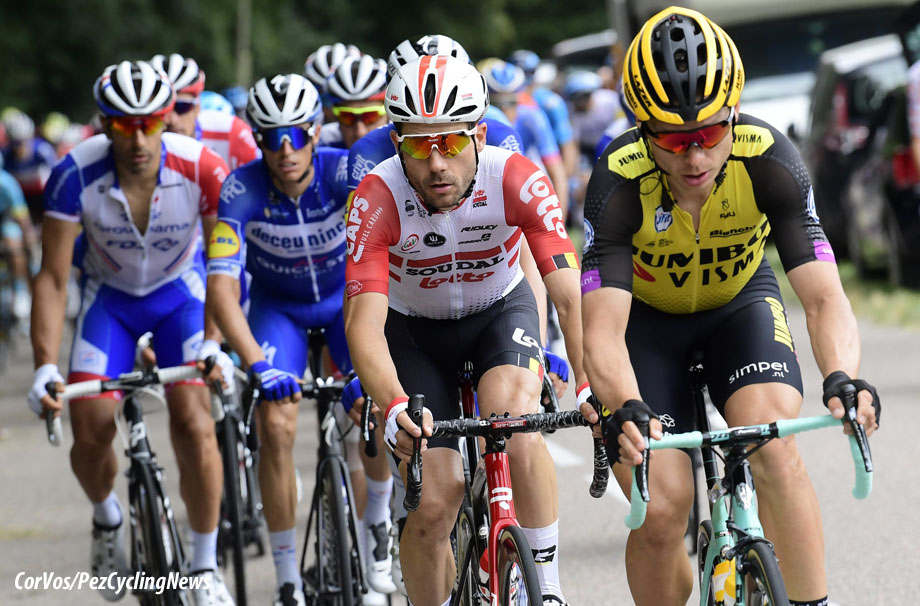 Tony Martin pulled the peloton for many kilometres

Escape caught after 217 kilometres
Five kilometres after the intermediate sprint their lead was only 30 seconds. The peloton let them hang out in the wind for a while, but at 13 kilometres from the line Rossetto was the first to be caught and soon after, Offredo. They had raced no less than 217 kilometres off the front. After that it was up to Jumbo-Visma, Sunweb, Deceuninck – Quick-Step and Bora-Hansgrohe to battle for control of the peloton. 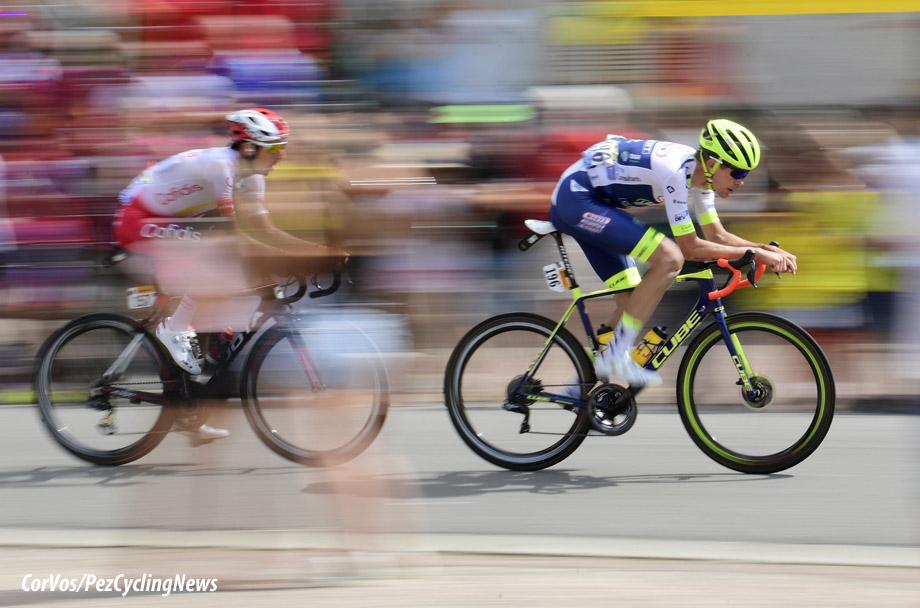 The fun was soon to end 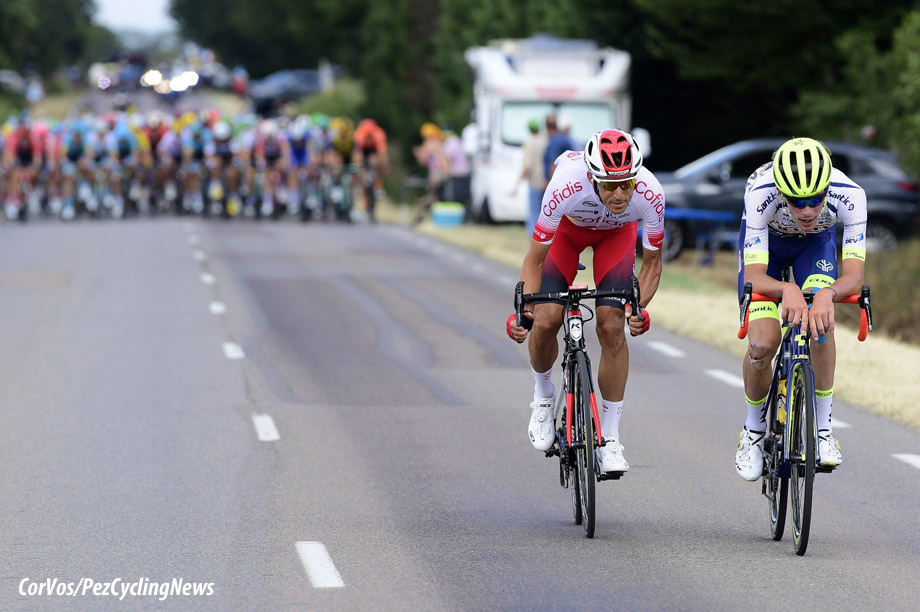 Wout van Aert led the peloton into the last 3 kilometres, bringing the GC riders into the safety zone. He remained on the front until Amund Grøndahl Jansen took over 2.5 kilometres from the line. The teammates of Sagan were ready and on the wheel of the Norwegian. After that it was up to Deceuninck – Quick-Step, but the Belgian team was overtaken by Dylan Groenewegen. 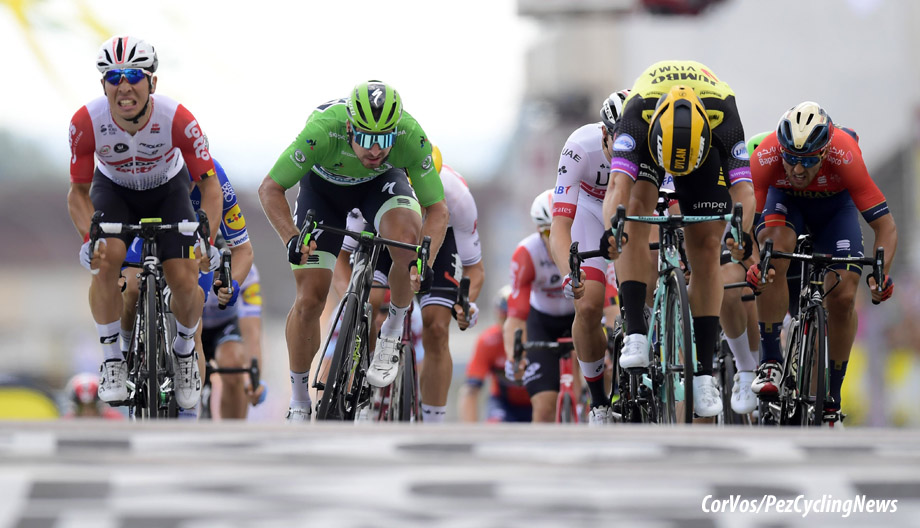 Groenewegen was just too strong on the uphill finish

The Dutchman passed the ‘Blue Brigade’ on the left at high speed as he rushed to the finish line. Caleb Ewan came close, but the fast-man from Jumbo-Visma timed his last lunge just a little better. For the Australian it was second place, Sagan came third. Sonny Colbrelli and Jasper Philipsen (UAE Team Emirates) completed the top 5. Giulio Ciccone did not see his yellow leader’s jersey endangered and remained in the overall lead. 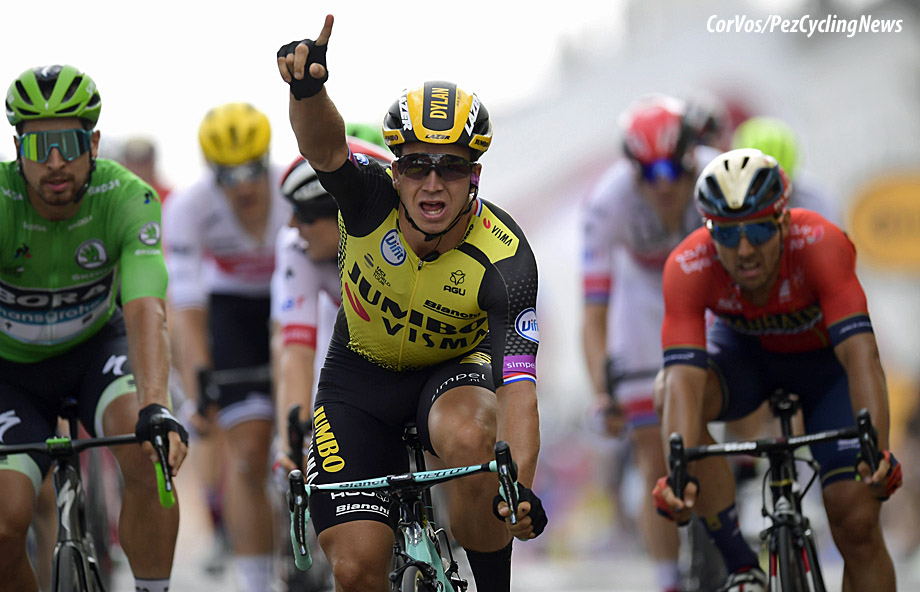 Another stage win for Jumbo-Visma

Stage winner, Dylan Groenewegen (Jumbo-Visma): “It’s always very close with Caleb as he’s a very good sprinter. I like to sprint against him. But this time I won. I had a difficult start to the Tour but yesterday I felt good again. Today the team really charged for me. And it was great. We took the lead very early but it was good. I started my sprint with 350 metres to go. I saw that Ewan had gone but fortunately it was enough. The first day was not at all what I expected and we worked very hard to get to this moment. I’m really happy with the team. After the last sprint stage they said they believed in me and they worked really hard for me.” 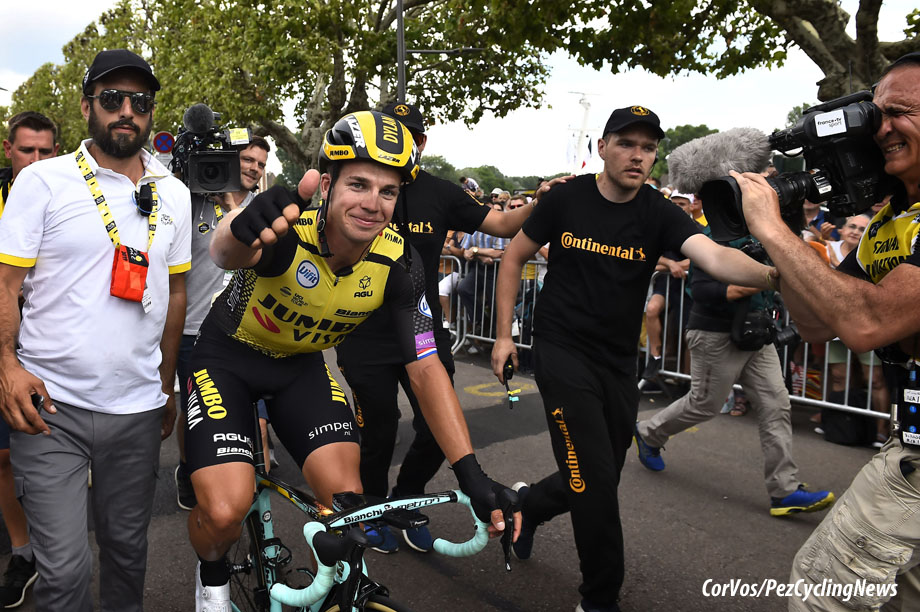