Stage Report: Stage 8 was a big game of cat and mouse and the mouse was Thomas de Gendt (Lotto Soudal), the cats were Julian Alaphilippe (Deceuninck – Quick-Step) and Thibaut Pinot (Groupama-FDJ), followed by a pack of more cats – the peloton, what was left of it. De Gendt went early and then attacked his break companions, behind; Alaphilippe and Pinot chased him down, but he held on for the win. At the end of a fun-packed day, Alaphilippe has the yellow jersey back on his shoulders. 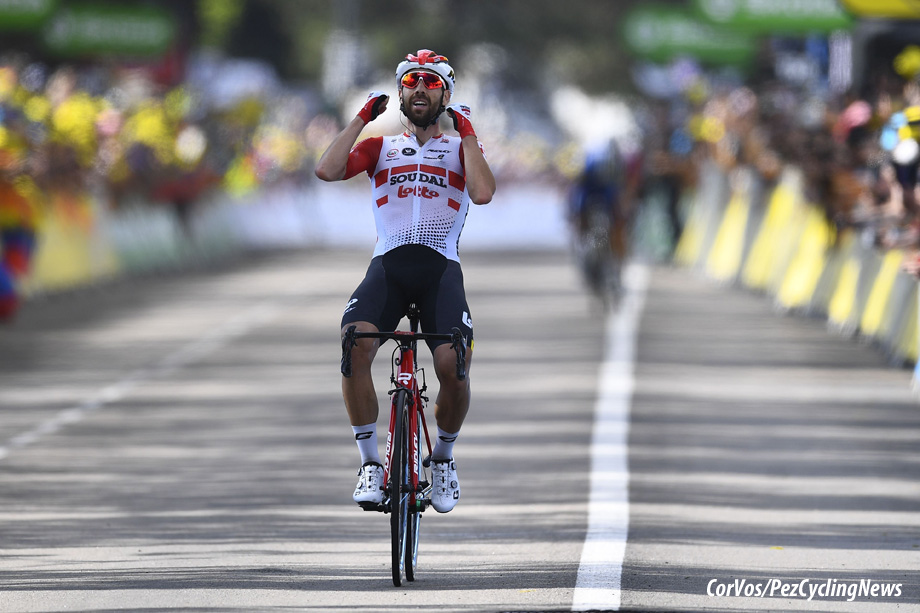 Thomas De Gendt was the last man standing from the early break, he then squeezed out a powerful solo to the finish line in Saint-Étienne. Julian Alaphilippe recaptured the overall lead in the finalé, the Frenchman, together with Thibaut Pinot, the pair finished 20 seconds ahead of the group of favourites. 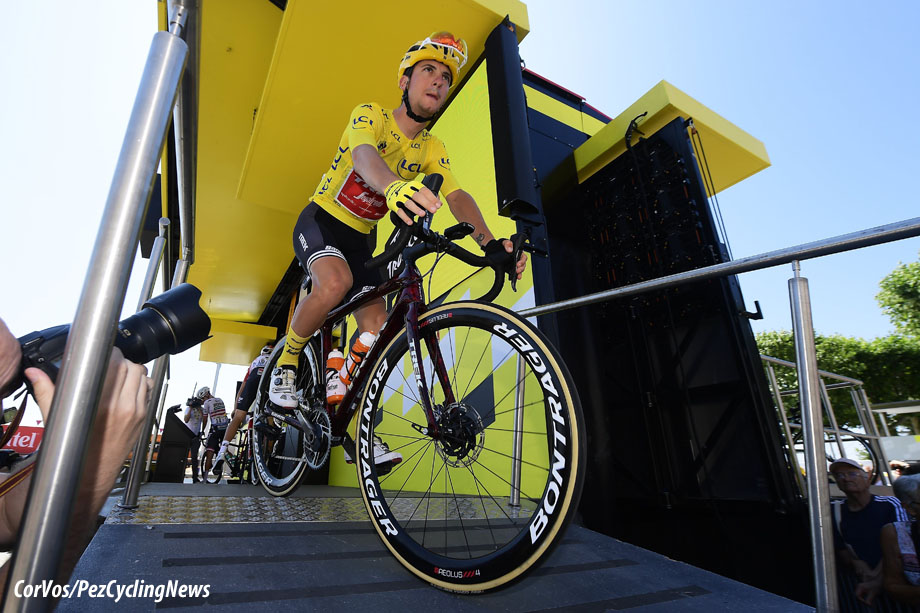 Stage 8 Route:
Mâcon to Saint Étienne – Not a day for the sprinters. Seven categorised climbs: Five Cat. 2 and two Cat. 3, the final climb, the Côte de la Jaillère, comes 12.5 kilometres from the finish line in Saint Étienne. Take a look at the profile and see if you can find one piece of flat road. Saint-Étienne was ignored by the Tour de France before the World Wars due to its position in the centre of France, since 1950 Saint-Étienne has welcomed the race 25 times. The names of the winners crowned in this city (Bobet, Hinault or Herrera) speak for themselves. 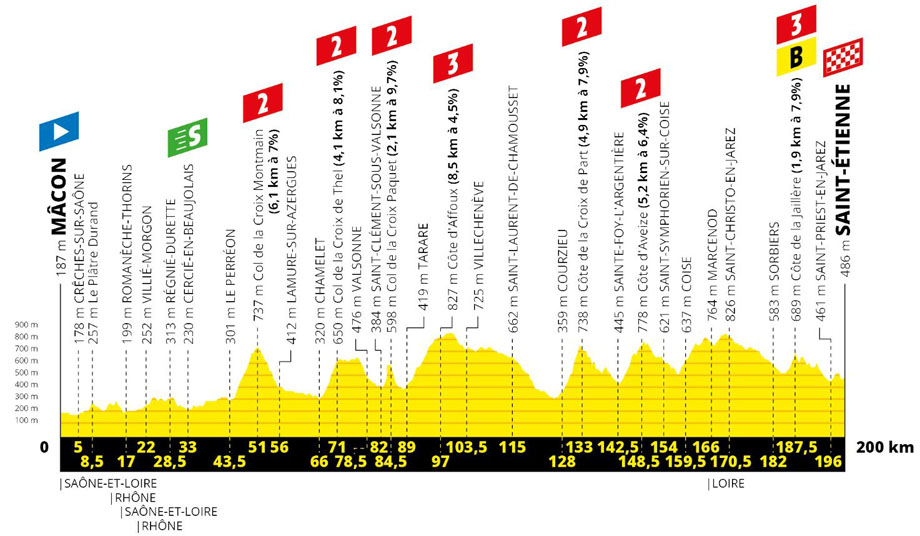 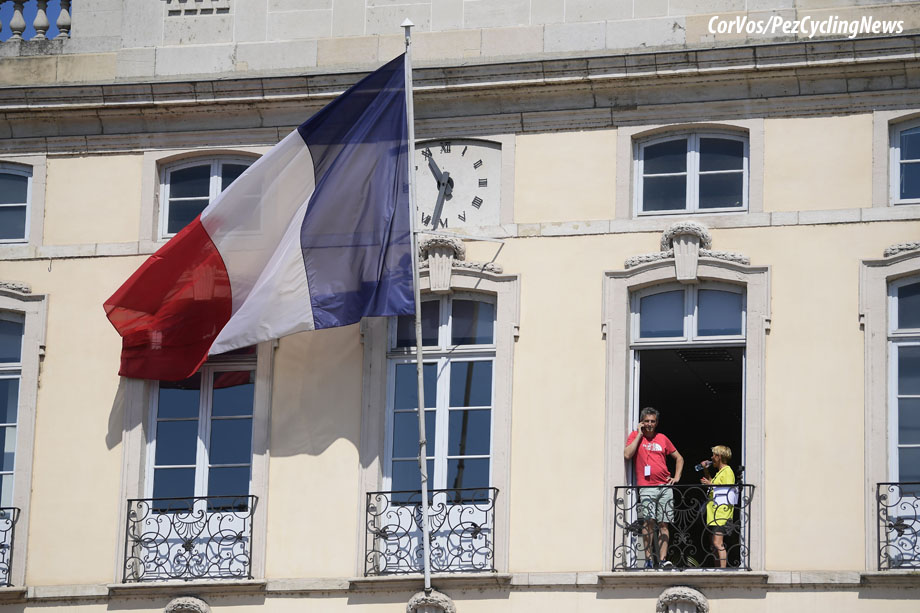 Good view of the start in Mâcon 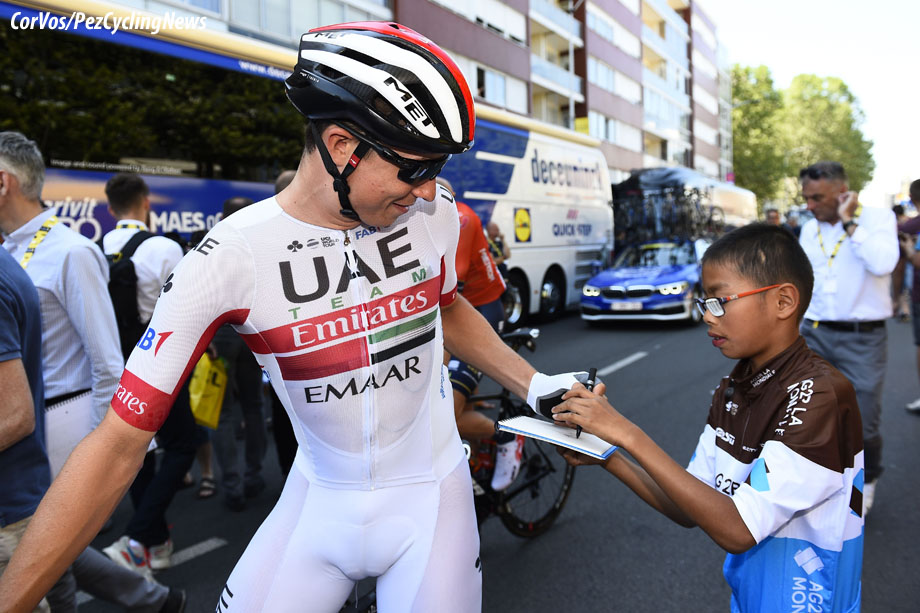 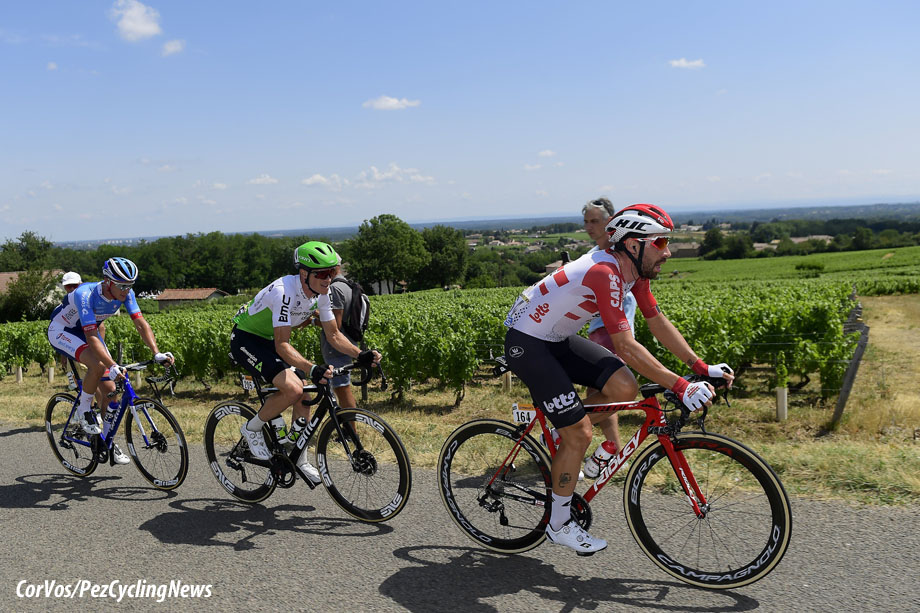 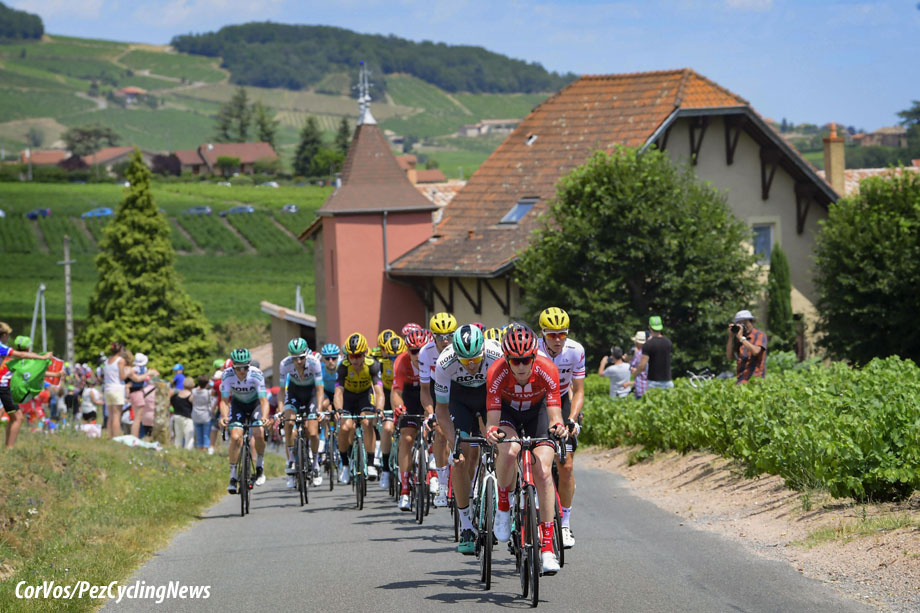 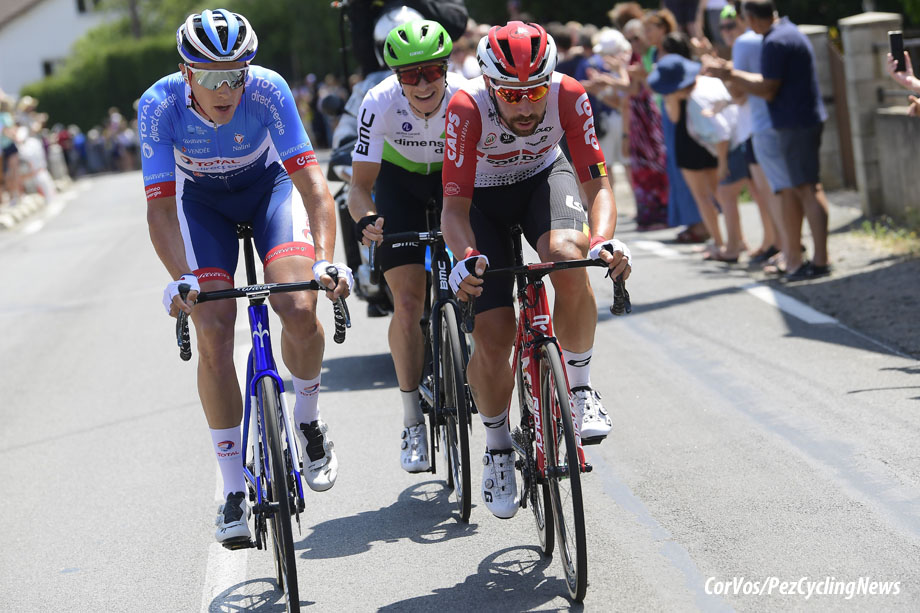 De Gendt, King and Terpstra were to have some extra company – Alessandro de Marchi (CCC)

The break took a 5 minute lead, but they did not get more than that from the peloton. Bora-Hansgrohe and Deceuninck – Quick-Step then put riders on the front to narrow the gap, they had plans for Julian Alaphilippe and Peter Sagan. Before the Côte d’Affoux, they had reduced the lead to 3 minutes. 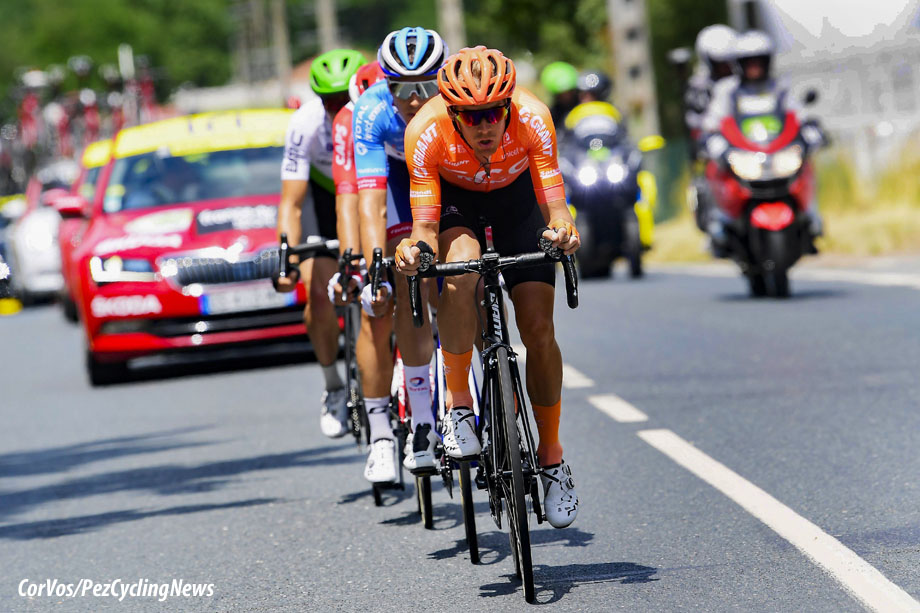 De Marchi made it across to the front

Trek-Segafredo were in control at first 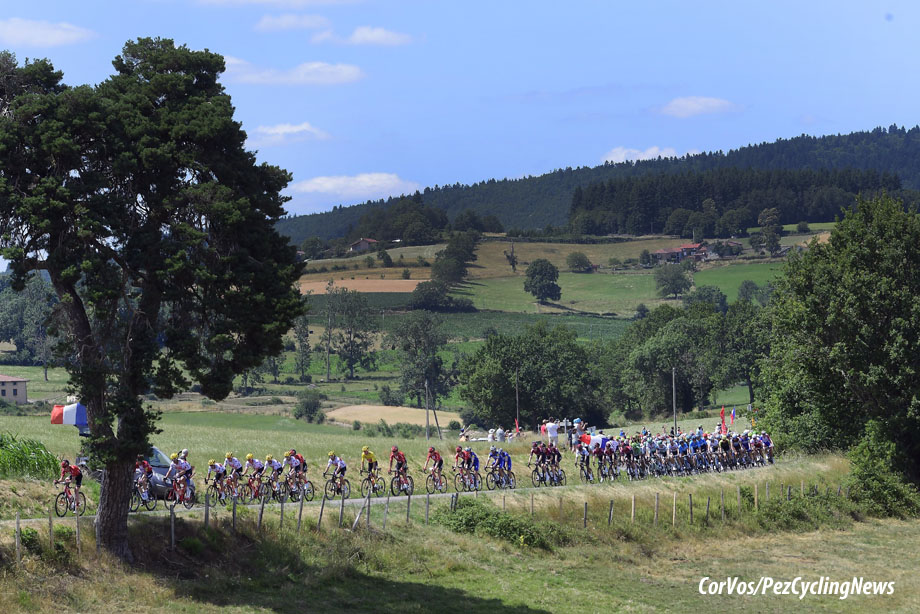 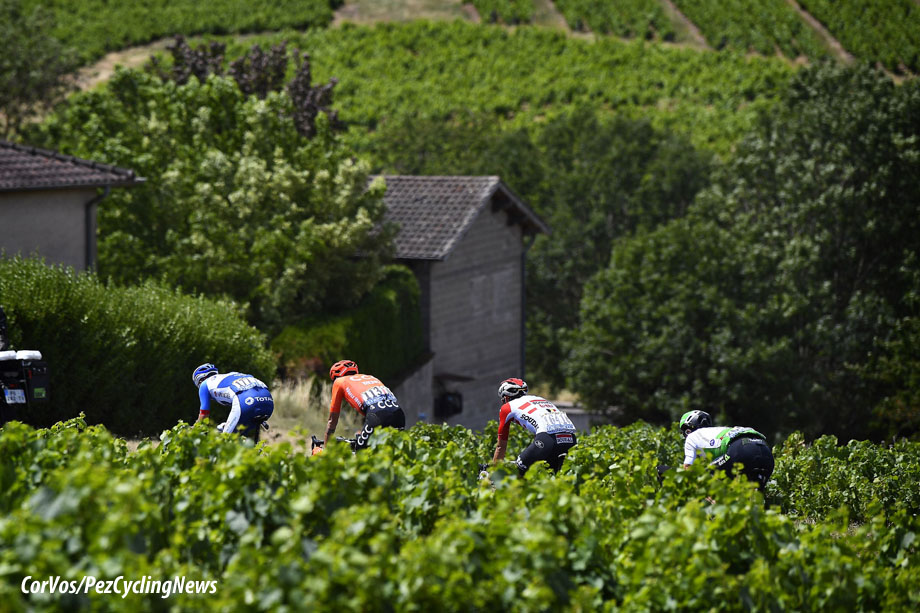 The break was about to split

The lead then grew to 4 minutes, even though the peloton had lifted their speed. The back door was wide open in the peloton and Wout van Aert could no longer follow the pace, Peter Sagan and Steven Kruijswijk were also in trouble, although they did manage to rejoin later. 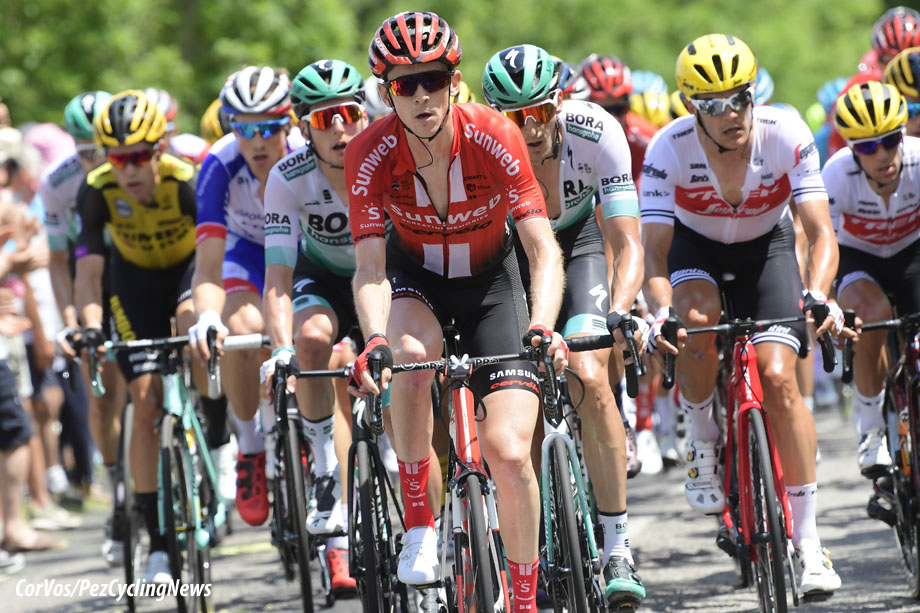 Sunweb’s Chad Haga did a lot of work

After the Côte d’Aveize, where De Gendt was the first over the summit, like all other climbs, there were only 50 riders left in the chase group. In the run-up to Côte de la Jallière, the last climb of the day, EF Education First and Astana took charge of the chase and the two leaders advantage narrowed quickly. With 20 kilometres to go they only had 1:20. 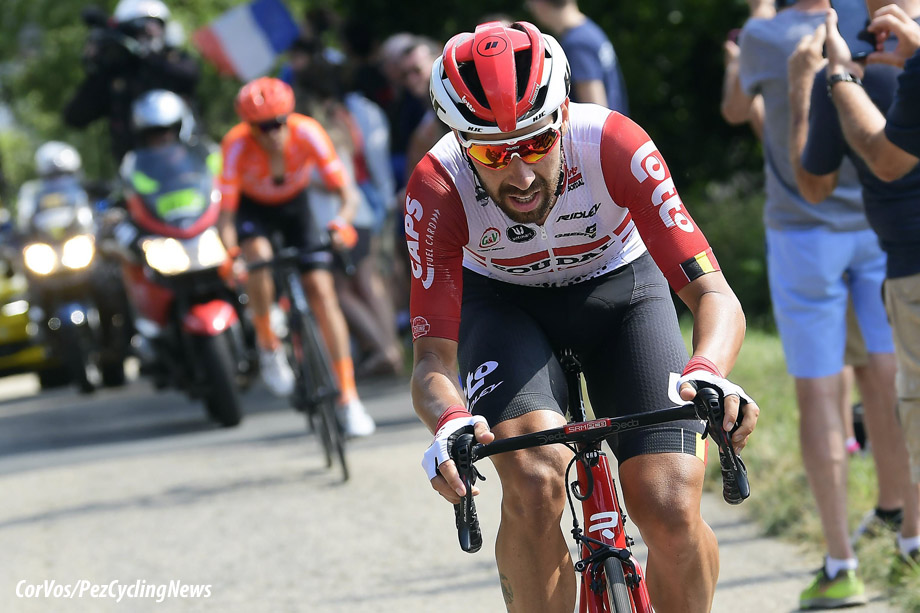 The nervousness increased on the run-up to the Côte de la Jallière. Just before the climb, Geraint Thomas crashed with some of his teammates. The Tour winner was pulled back to the chasers by Wout Poels, so did not lose any time. 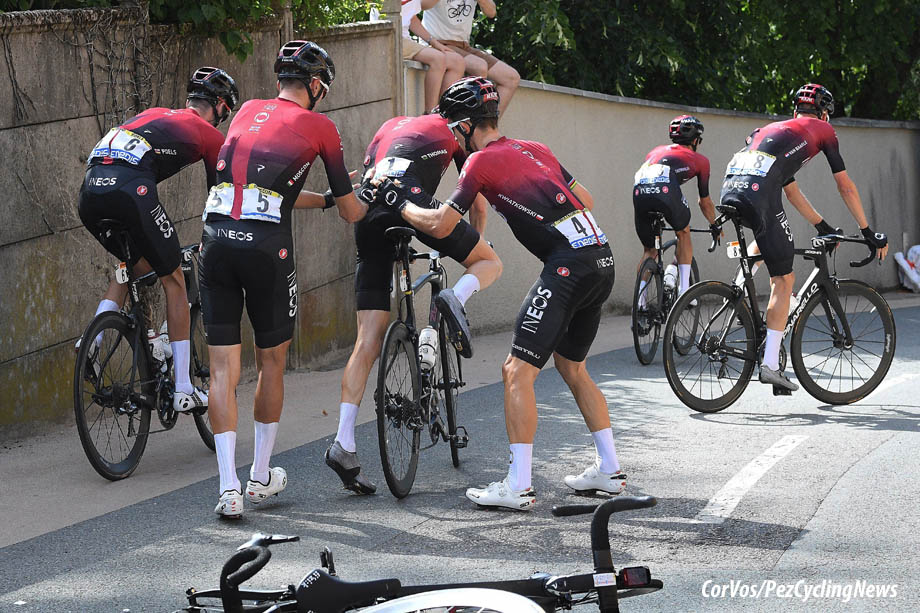 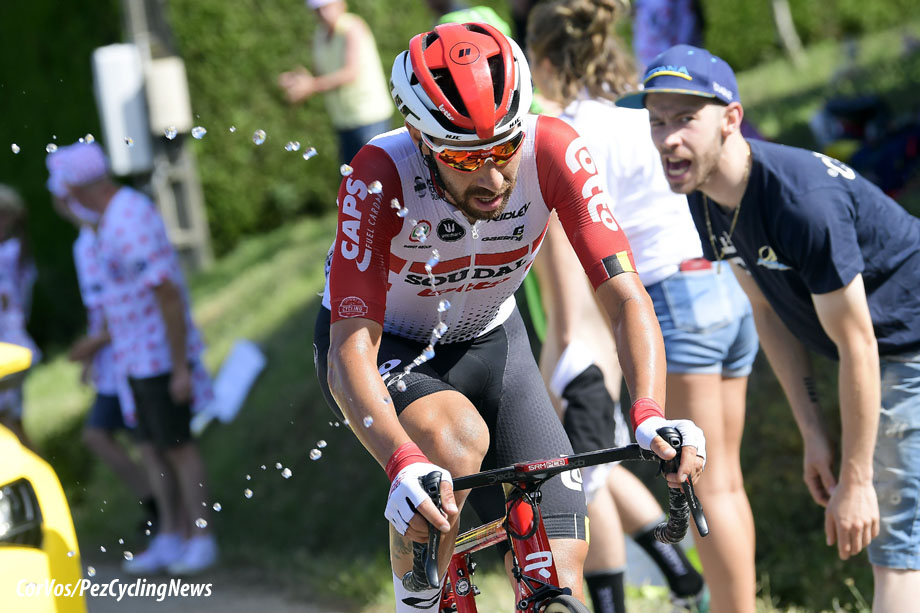 At the front; De Gendt left his Italian companion on the Côte de la Jallière and crossed the top with a 30 second lead. Behind him all hell had broken loose. Just before the summit of the Jallière, Alaphilippe jumped away to pick up five bonus seconds, but when he looked round he saw that only Thibaut Pinot was in his wheel, and so they both continued with the move. 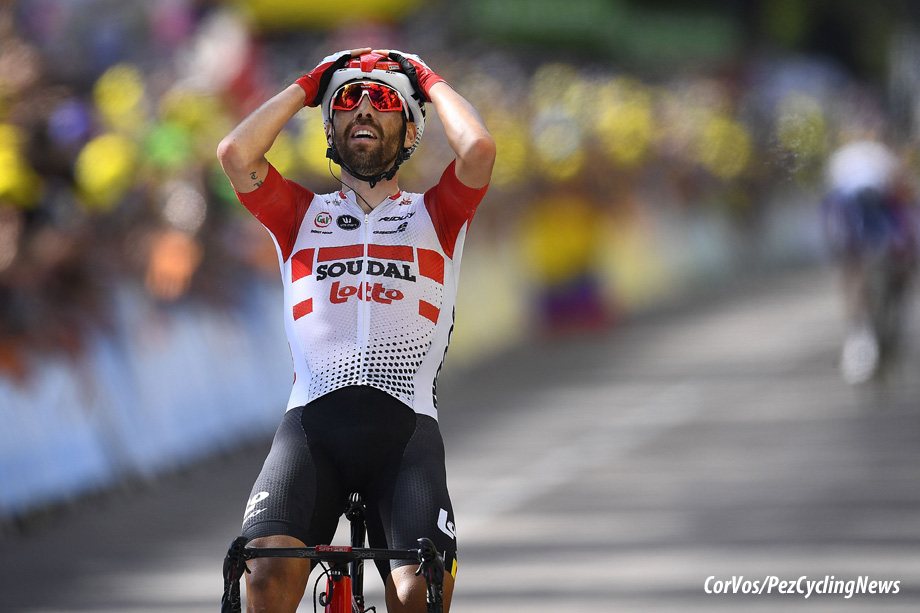 6 seconds in hand for the win

De Gendt kept his half-minute lead on the favourites group in the last 10 kilometres, but saw Pinot and Alaphilippe were approaching quickly. The two Frenchmen were only 10 seconds behind De Gendt, but the Belgian managed to hold on. De Gendt was able to celebrate his victory in Saint-Etienne.

Stage winner, Thomas De Gendt (Lotto Soudal): “From 70km to go, I just kept riding full gas until last climb. The bunch was coming closer but I had to go solo and stay ahead of them. I had really good feelings all day. From 5’, our lead went down quickly to 3’30’’, but we didn’t pushed that much until the climb of the feed zone. That was the moment to get a bigger gap again. I almost crashed in a few corners but I made it. It hurts so much but it’s wonderful. It’s also mission accomplished for the team. Our goal was to come to the Tour for winning a stage. We almost got it yesterday with Caleb [Ewan] yesterday. I’ve had very good feeling already for the whole Tour and I had amazing legs today.” 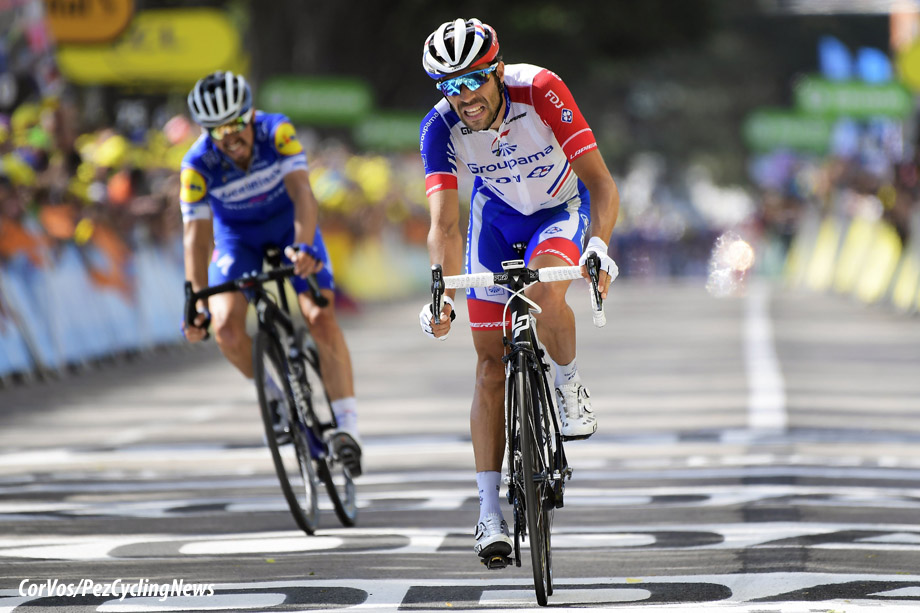 Pinot and Alaphilippe took 20 seconds plus the bonus

Alaphilippe was just behind Pinot at the finish line in the battle for second place. The group of favourites came in 20 seconds after the two French, so Alaphilippe recaptured the yellow jersey from Giulio Ciccone. 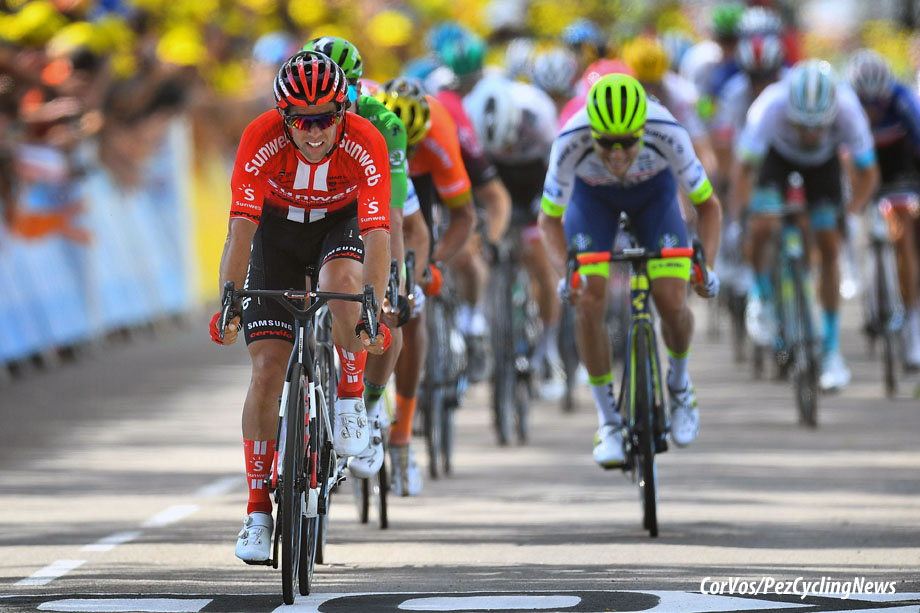 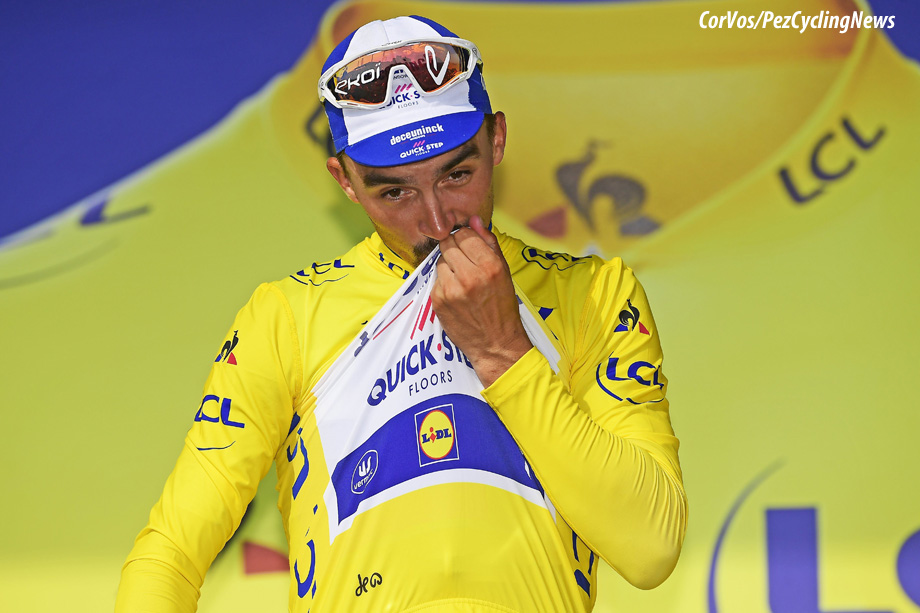 Alaphilippe back in yellow

Overall leader, Julian Alaphilippe (Deceuninck – Quick-Step): “It was the ideal scenario but I wasn’t sure if it could happen this way. I had nothing to lose. I knew my deficit on GC was only 6’’, but it was a big task at the same time. It’s nice that breakaways get rewarded. I had to attack and go full gas. I didn’t know the finale. I was just focused in the last kilometres and it went very fast. In the last 500 meters I thought it’s now or never, I just went full gas. It was difficult to be in a better situation than with Thibaut Pinot. Had I been alone, I would have gone flat out anyway but with him, I could recover a bit sometimes. I couldn’t dream of anything better than riding in yellow jersey on Bastille Day tomorrow.”