Stage Report: There was no fairytale for France as South Africa’s Daryl Impey (Mitchelton-Scott) won the ninth stage of the Tour de France in Brioude on Sunday – Bastille Day. After more than 170 kilometres, the South African was the best of a big break of the day. In a two-man sprint, Impey beat Tiesj Benoot (Lotto Soudal) after the two broke away from their fellow escapees on the final climb of the day. Julian Alaphilippe (Deceuninck – Quick-Step) finish with the peloton, 16 minutes down, to keep his overall lead. 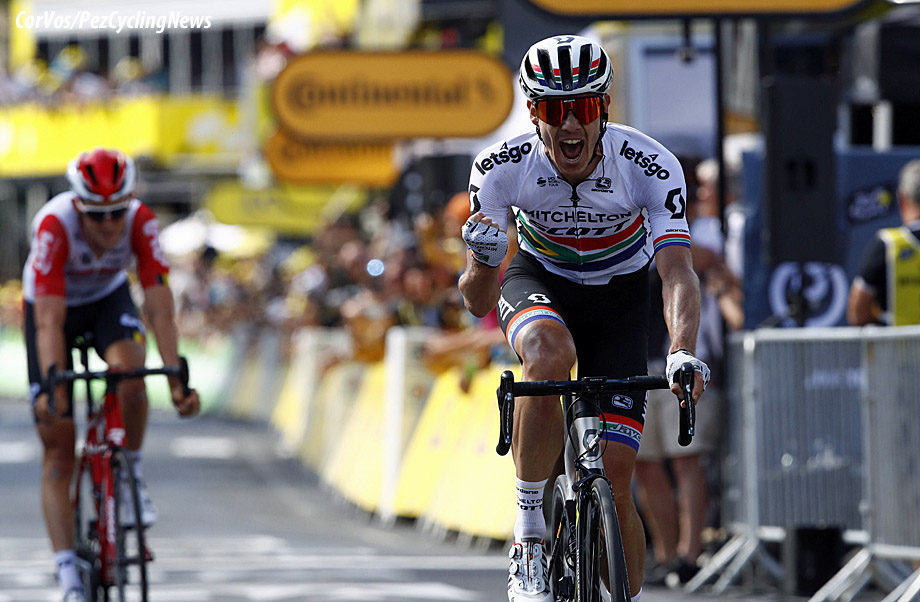 The stage could not have started better on this Bastille Day for the French with Julian Alaphilippe in the yellow jersey. But after the big break of the day split on the final climb, there was no Frenchmen to fight for the stage honours. A Belgian and a South African: Daryl Impey and Tiesj Benoot sprinted into Brioude for the Mitchelton-Scott rider to take the flowers on France’s big day. 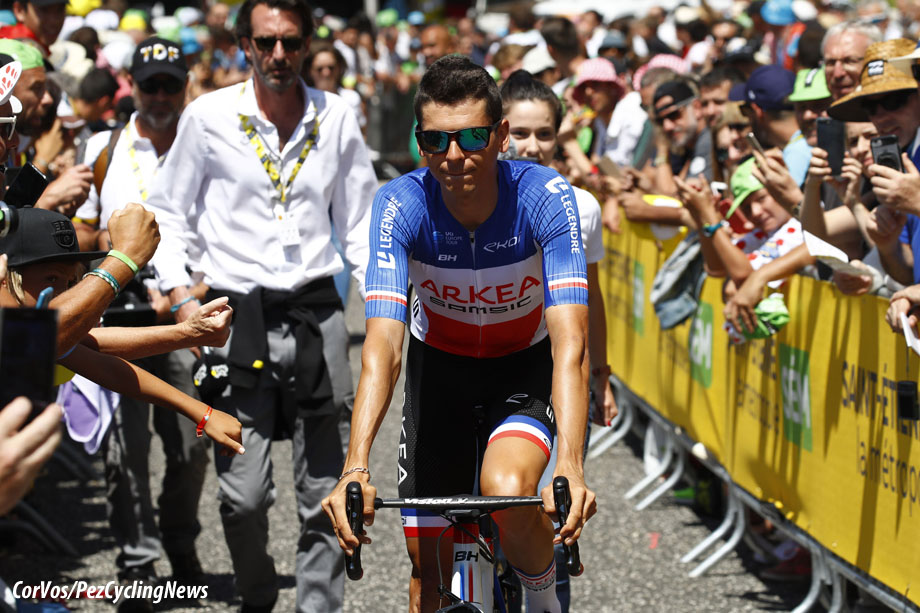 Stage 9 Route:
Saint-Étienne to Brioude, 170,5 kilometres with three climbs, the hardest coming after only 36,5 from the start. The Cat. 1 Mur d’Aurec-sur-Loire (3.2km at 11%) will be shock to many this soon in the stage. There are two more climbs, both Cat.3, the second climb after 106 kilometres and the final climb comes with 13 kilometres to go, the Côte de Saint Just is 3,6km long at 7,2%, the course is nearly all downhill to the finish line in Brioude. Brioude is known to cycling aficionados as the home town of Romain Bardet, second on the Tour de France in 2016 and third in 2017. The leader of the AG2R-La Mondiale team first raced with the Vélo Sport Brivadois club in 2000. 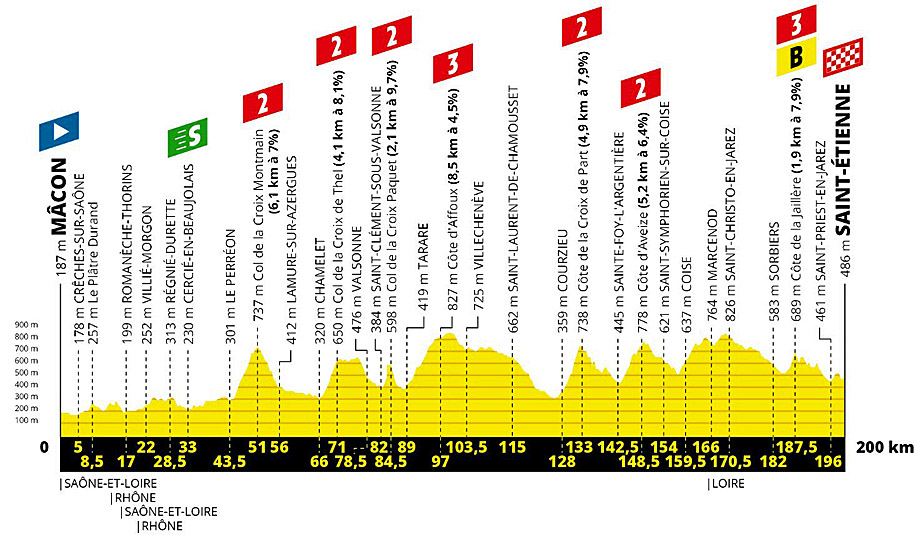 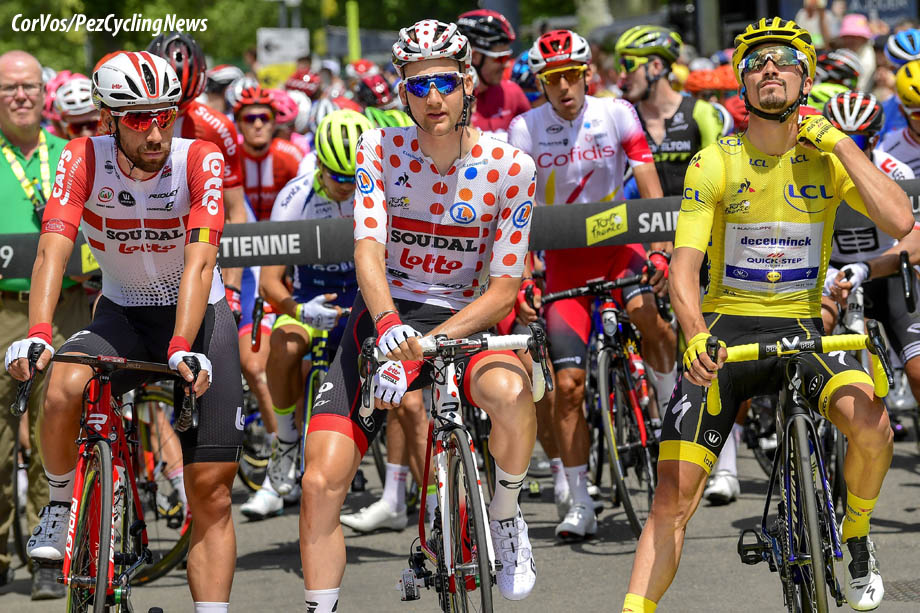 Shortly after the start in Saint-Étienne, yellow jersey Alaphilippe jumped in on an attack attempt, but this was not allowed. Riders such as Wout van Aert, Dylan van Baarle and KOM jersey wearer Tim Wellens also showed themselves. Only they didn’t get away. 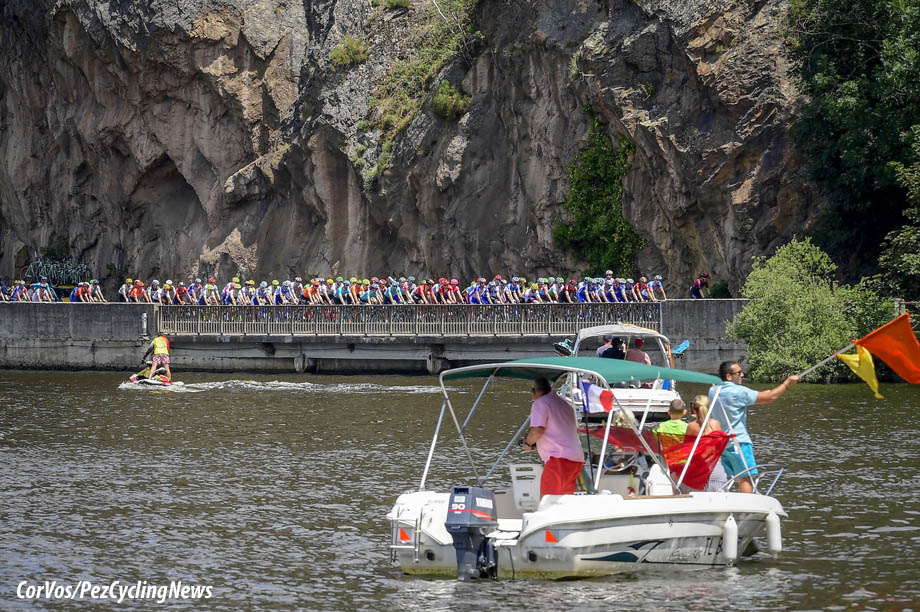 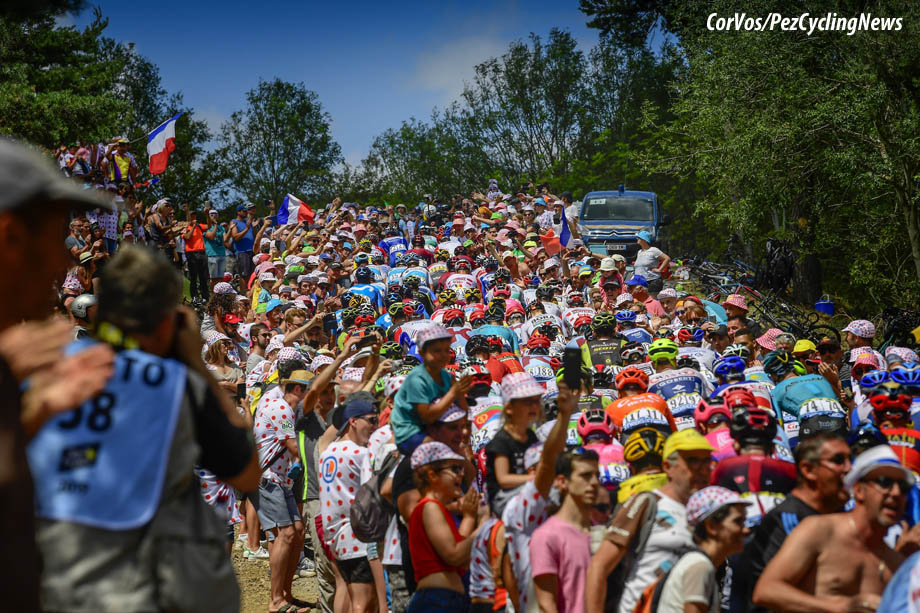 The group were given the OK and soon rode away to a lead of more than 6 minutes. Marc Soler (Movistar) and Rui Costa (UAE Emirates) had missed the move and tried to cross. On the Mur d’Aurec-sur-Loire, Soler managed to catch the break. Benoot took the mountain points at the top in defence of Wellens’ jersey. The lead increased to 10 minutes. 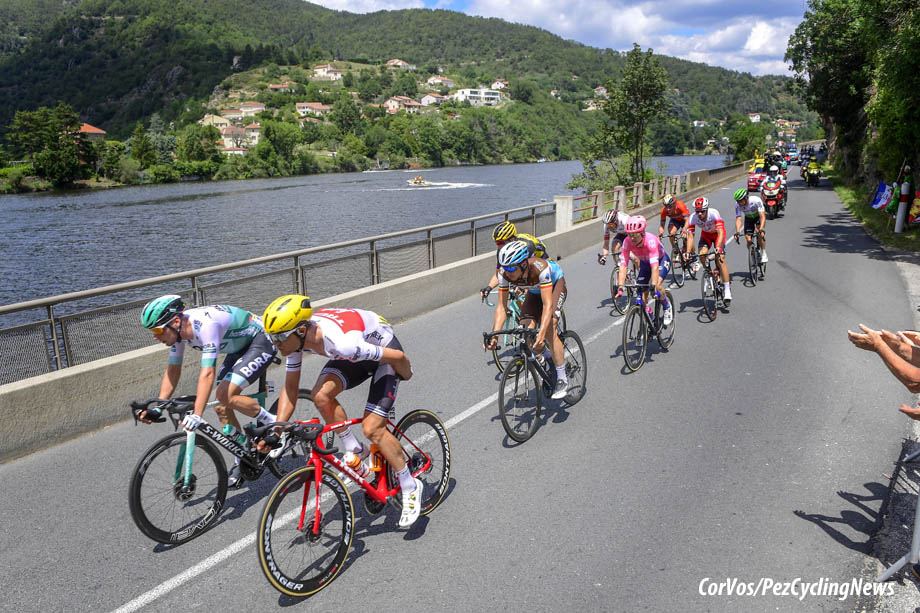 Rui Costa was stuck at half a minute after the summit of the Mur d’Aurec, but on the plateau that followed he fought a solo battle against a well-working leading group. Little by little the Portuguese rider lost time. In the peloton; the Deceuninck – Quick-Step kept the peloton under control, holding the break at 10 minuets. 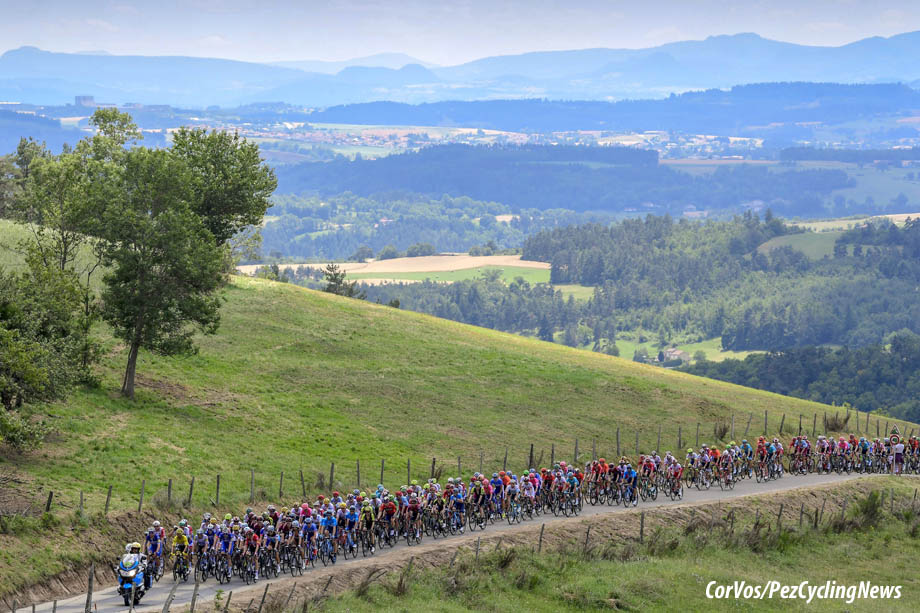 The peloton wasn’t in a big rush 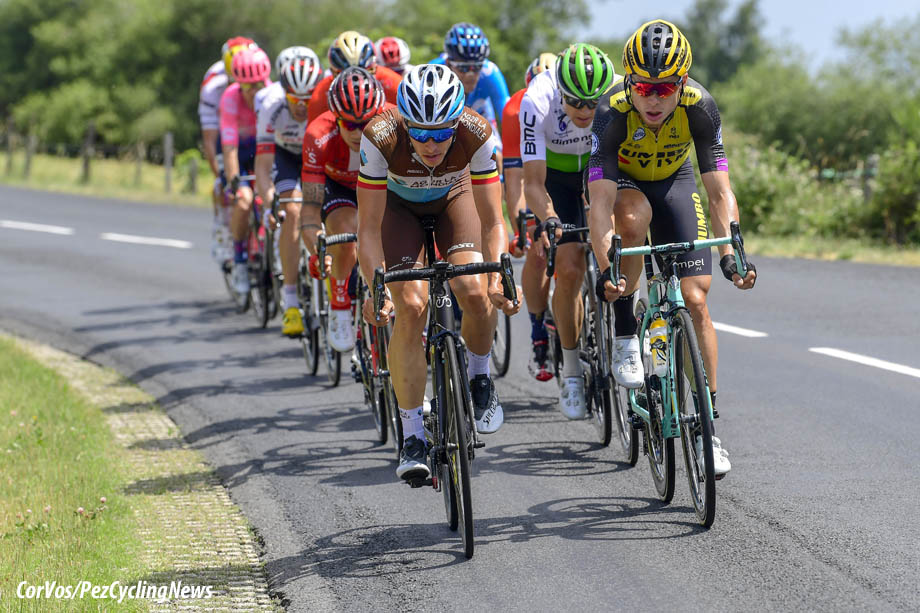 Pöstlberger goes solo
AT the front; Edvald Boasson Hagen won the intermediate sprint and Daryl Impey the mountain sprint on Côte des Guillaumanches. After that climb there was some attacks in the leading group, but the order was quickly restored. The leading group split on a small climb at 45 kilometres from the finish. Pöstlberger jumped away and started the descent with a head start. In the valley towards the foot of the last climb of the day (Côte de Saint-Just), the Austrian had a 1 minute lead. 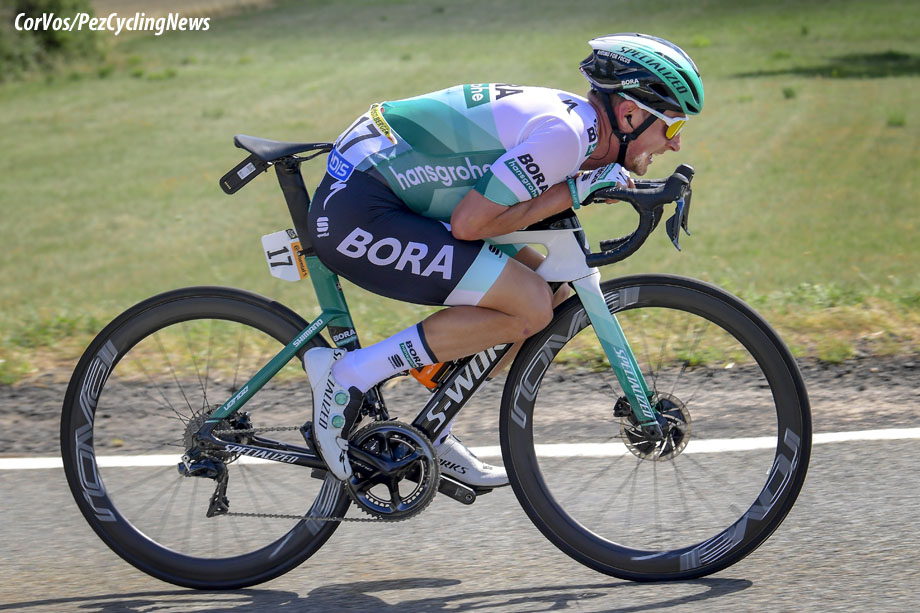 The Austrian took time on the descent 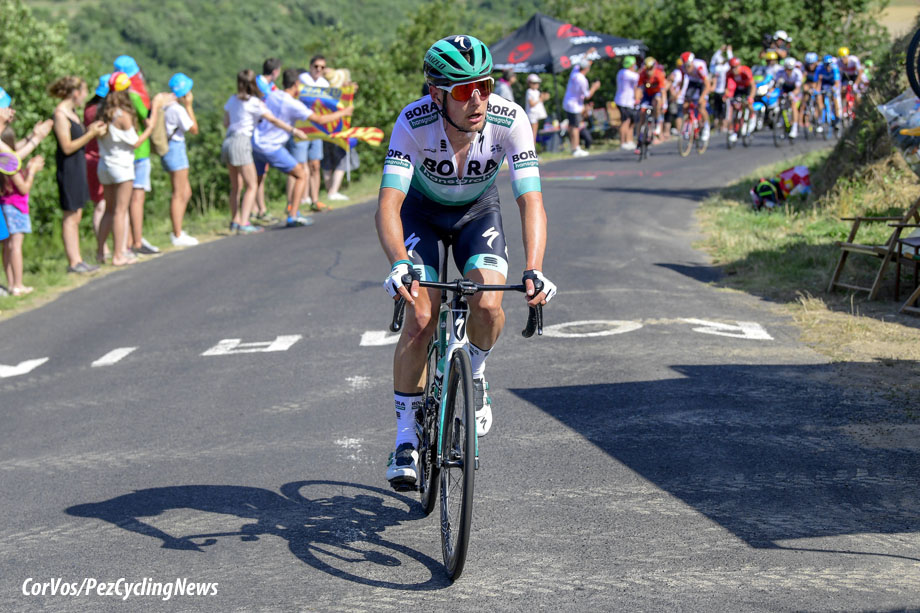 Pöstlberger slipped off the front

Behind him there was a battle on the undulating course towards Saint-Just (3.6 km at 7.2%). A group with Naesen, Tratnik, Soler, Impey, Stuvyen, Roche and Benoot quickly caught Pöstlberger on the final climb. Roche kept the pace high and only got Benoot could stay with him. The differences remained small and Impey could make the leap to the head duo with a strong jump. 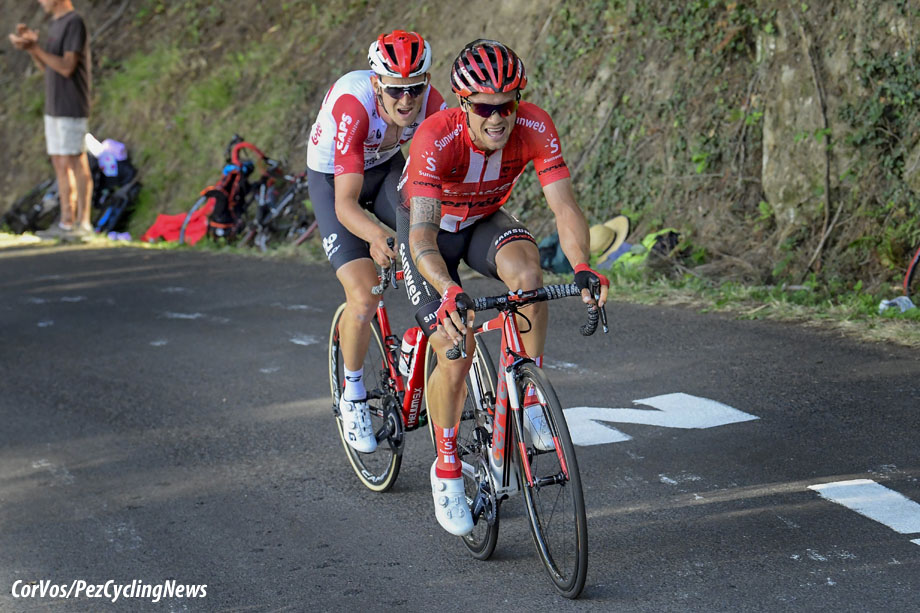 Roche looked very strong and kept the pressure on

Benoot vs. Impey
At the summit, the difference between the trio Impey, Benoot, Roche and a group with Naesen and Stuyven was 14 seconds. With 8 kilometres to the finish, it was Benoot who dropped Roche, only Impey could follow. Behind them the pursuers in the Stuyven group were at 14 seconds. 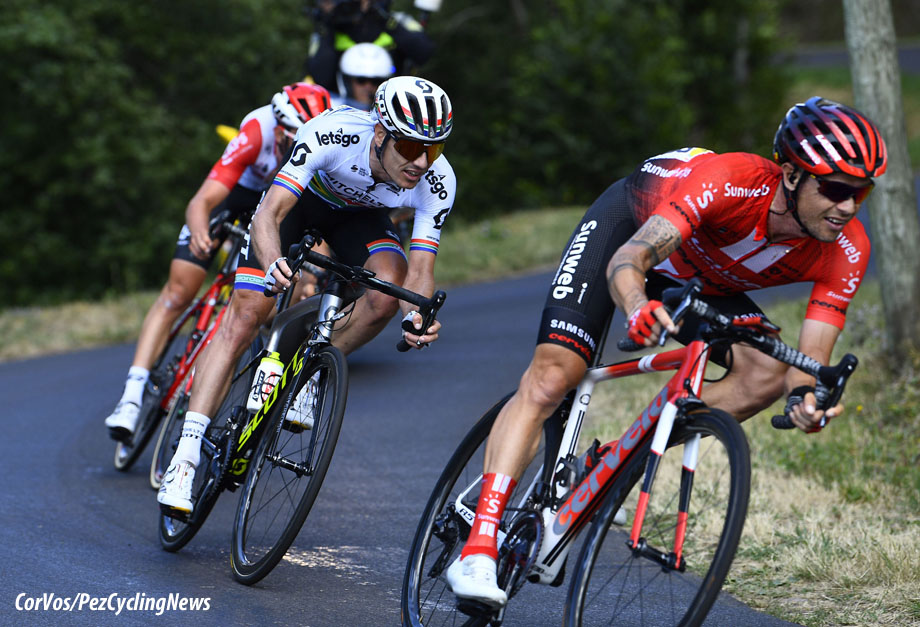 Maybe Roche should have held a little back 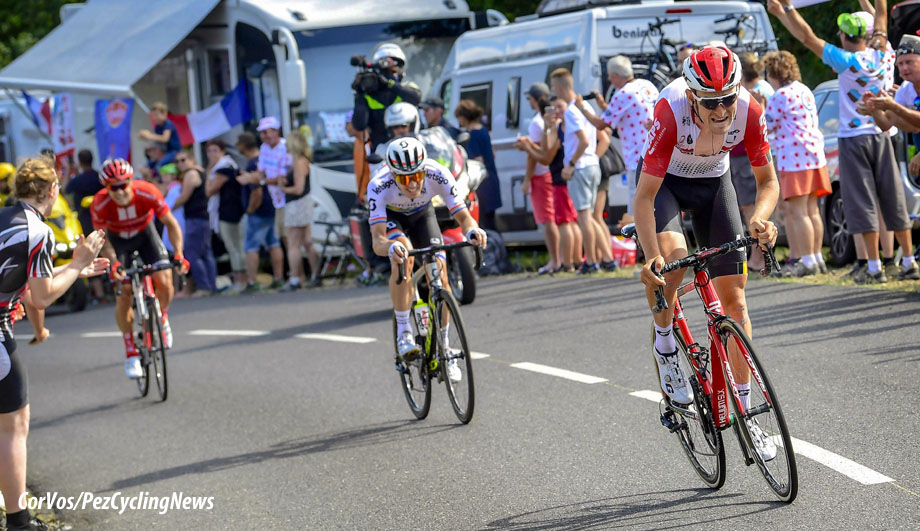 Benoot put in a big attack

Benoot and Impey continued to work well together, increasing the lead. Knowing that the South African champion had the best sprint, the Belgian sat on Impey’s wheel. Benoot tried a surprise attack, but he was no match for the South African. 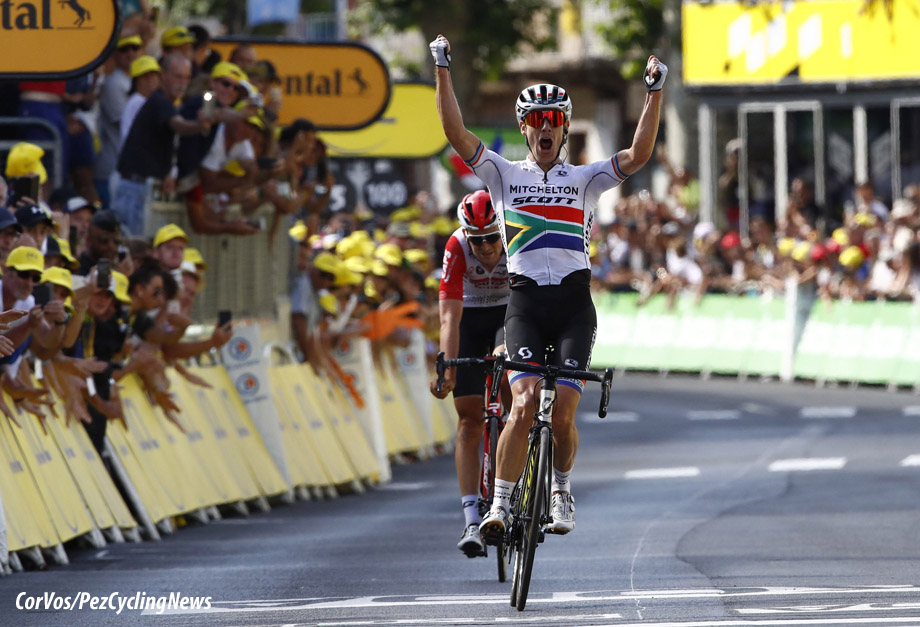 Ineos chase down Bardet
The peloton started the climb of the Saint Just 14 minutes behind Impey and Benoot. By the time they finished it was 16 minutes. Romain Bardet tried an attack as the finish was in Brioude, his birthplace. He also wanted to make up part of the two-minutes he was down on GC. George Bennett and Richie Porte went with the Frenchman, but the Ineos team closed the move down. The thinned peloton of favourites then rode relatively quietly to the finish. Nothing changed at the top of the leader board and France still had Alaphilippe in yellow on their big National day. 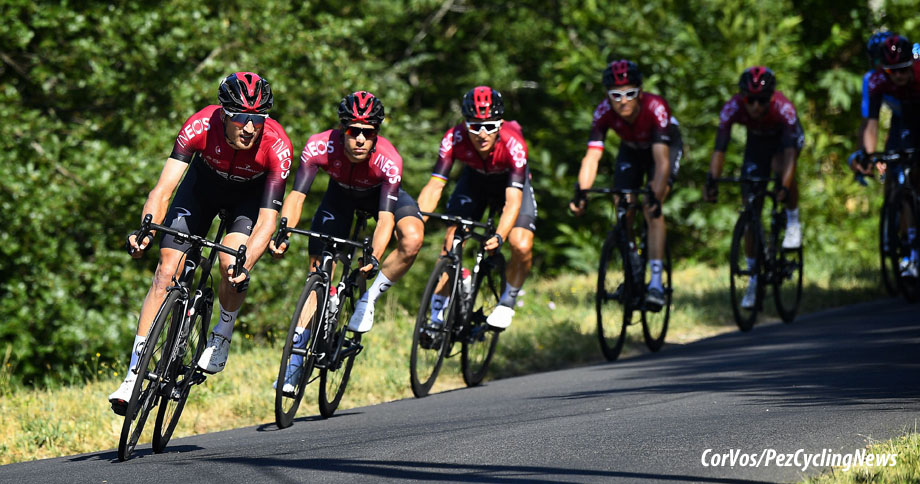 Stage winner, Daryl Impey (Mitchelton-Scott): “Pretty much, for me, from a Tour de France perspective, a stage win was something really missing. I made quite a few breakaways in the past few years and finally, today, I got the win on Bastille Day. It’s fantastic! It’s a dream come true. It’s so difficult to win at this level. I kind of marked this stage. I was kind of lucky to find the right move. We worked all well together. I’m glad the legs were there at the end to beat Tiesj Benoot. I haven’t been emotional like that for a long time. I think the last South African to win a Tour de France stage was Robert Hunter in 2007… it’s a magic victory.”