Stage Report: The first stage of the 2020 Tour de France was said to be one for the sprinters, what no one predicted was the weather. The day was no damp squib with crashes galore and a big bunch finish. One of the oldest men in the peloton, Alexander Kristoff (UAE Team Emirates) took the win ahead of World champion Mads Pedersen (Trek-Segafredo). Sunweb’s Cees Bol was third. 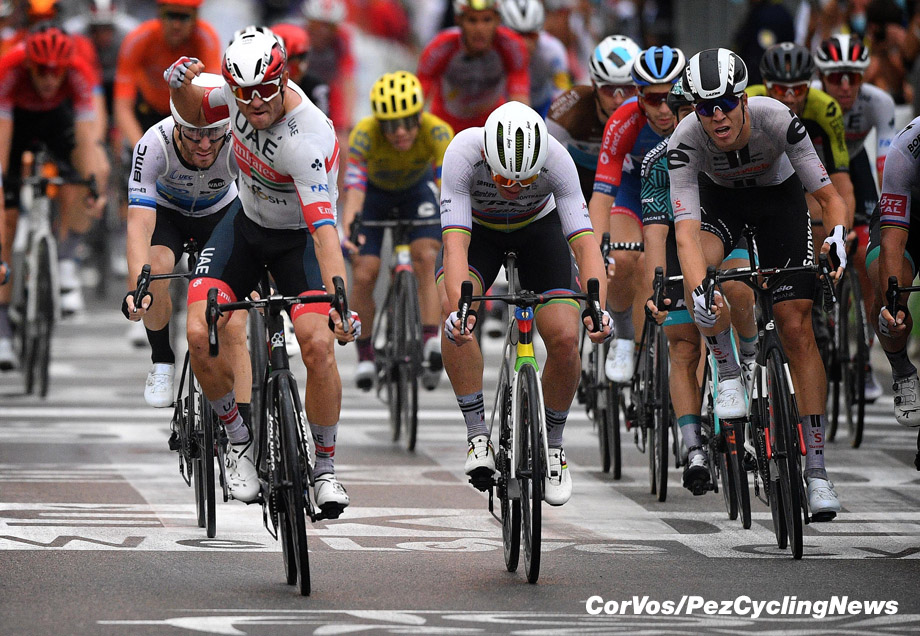 Stage and yellow for Kristoff 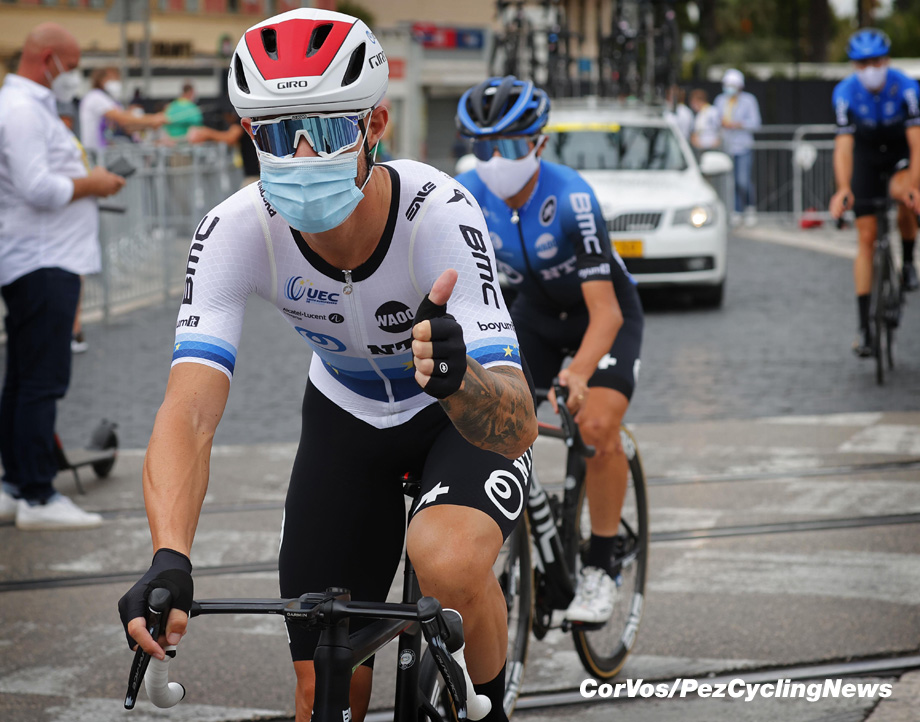 Stage 1 Route:
Christian Prudhomme described the stage: “A rather unfamiliar format perfect for a great popular show: three loops in the hinterland of Nice including one to be covered twice giving the spectators an opportunity to see the pack go by all along the day before possibly witnessing the first act of the great battle between the sprinters. A bunched sprint is indeed expected at the end of the long final straight on the Promenade des Anglais.” 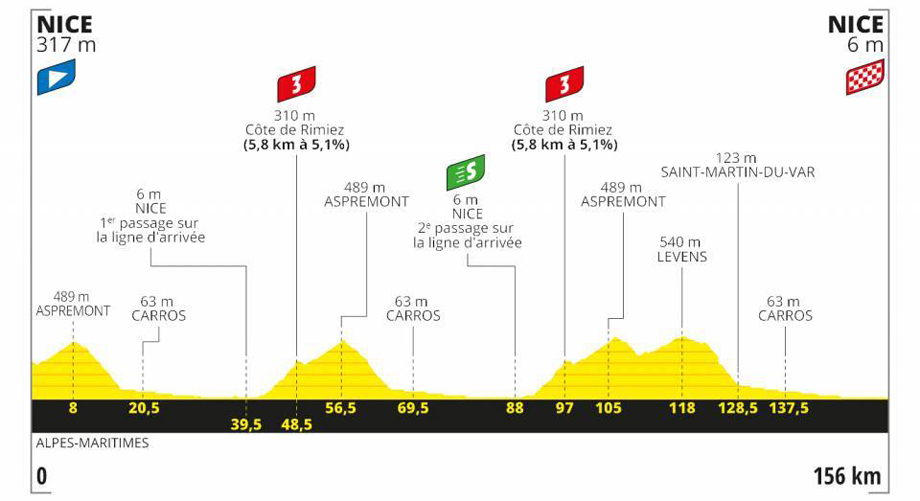 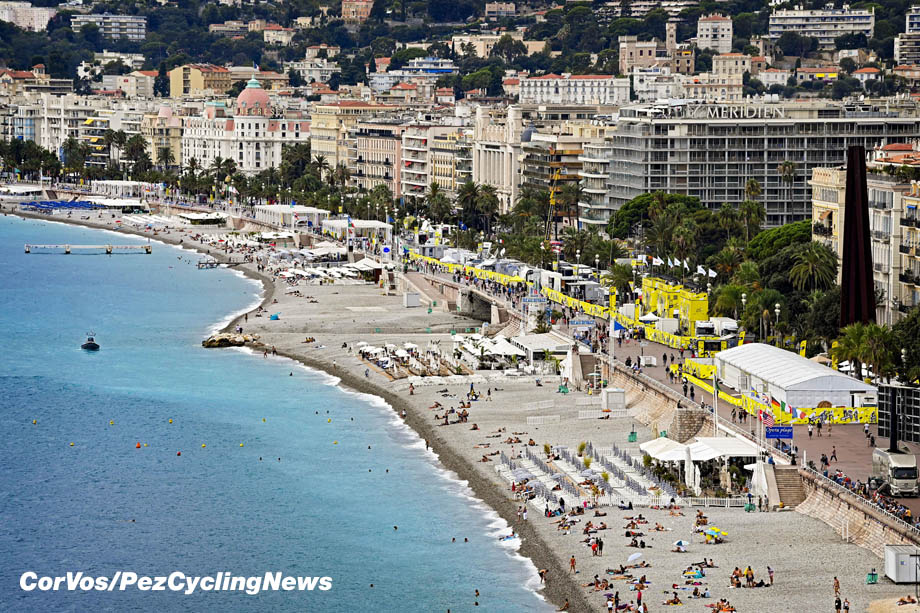 Nice place for the start and finish

Two months late, but the 2020 Tour de France got under way on Saturday afternoon in Nice. It didn’t take long for the first break of the day to make its move. Frenchman Fabien Grellier (Total Direct Energy), forced clear a leading group of three. Grellier was accompanied by fellow countryman Cyril Gautier (B&B Hotels-Vital Concept) and the Swiss rider Michael Schär (CCC). The three soon had a lead of more than two minutes. 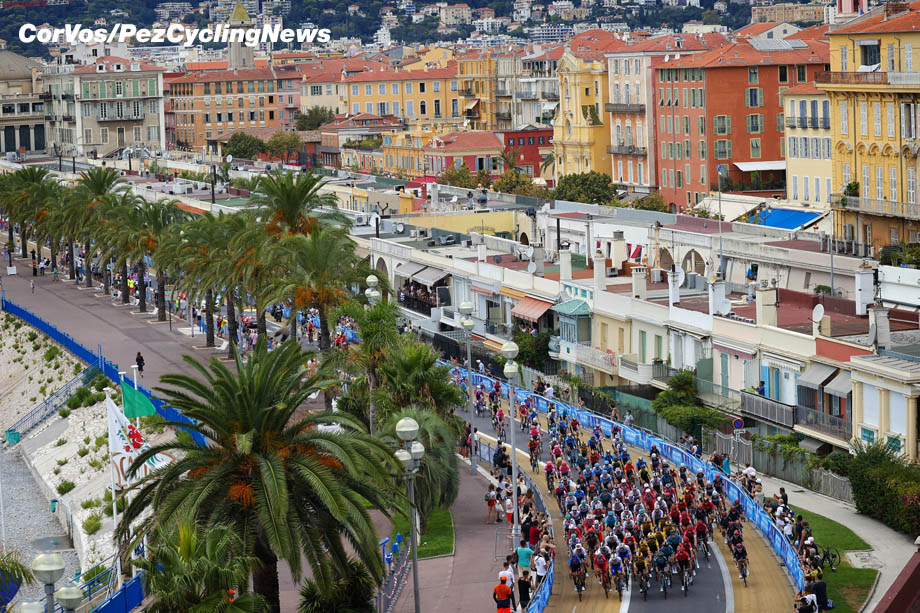 Because of the rain and the slippery conditions there were many crashes. On the first passage through Nice, Sam Bennett, Marc Soler and Domenico Pozzovivo all hit the ground on the Promenade des Anglais. Miguel Ángel López also had to be brought back up to the peloton by his teammates from Astana. 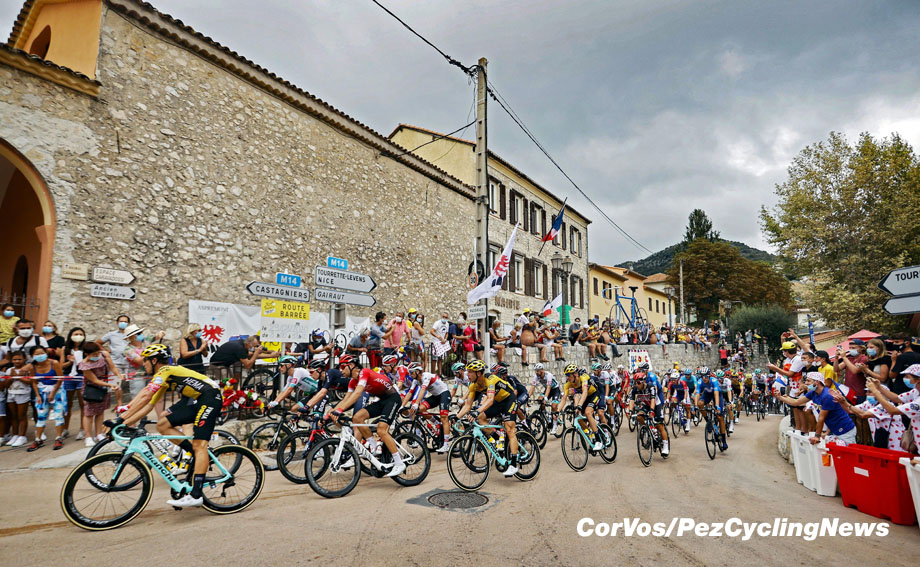 The day was occasionally dry

After 50 kilometres, came the first mountain points. Grellier won the sprint at the top of the Côte de Rimiez, a Cat 3 climb. The peloton did not let the three get too away too far, and their lead remained around 1:30. 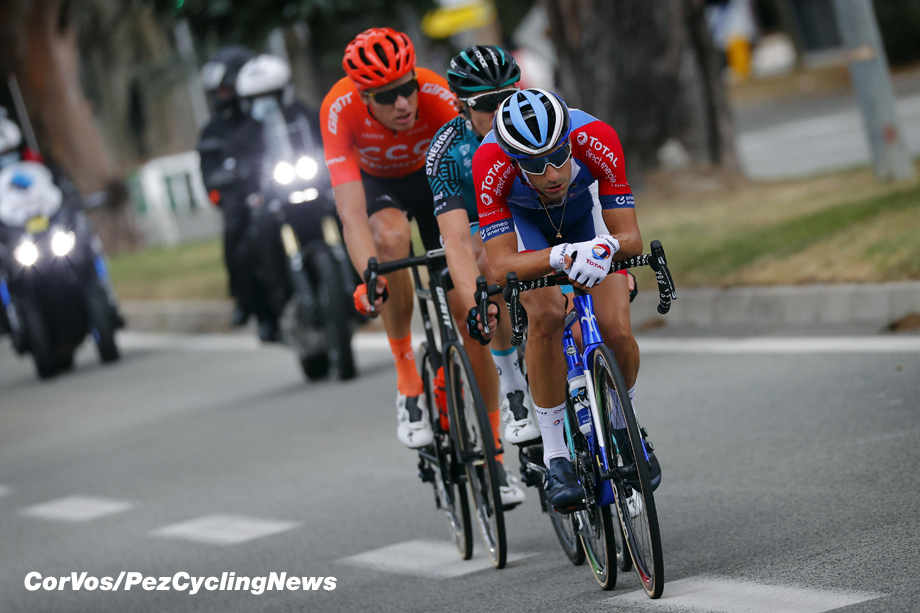 Pavel Sivakov was another riders who crashed heavily. The Russian was injured and struggled to get back. Then it was the turn of Julian Alaphilippe, physically he was unhurt, but he needed more than one bike change. Tom Dumoulin was also forced to chase, but managed to reconnect a little later. 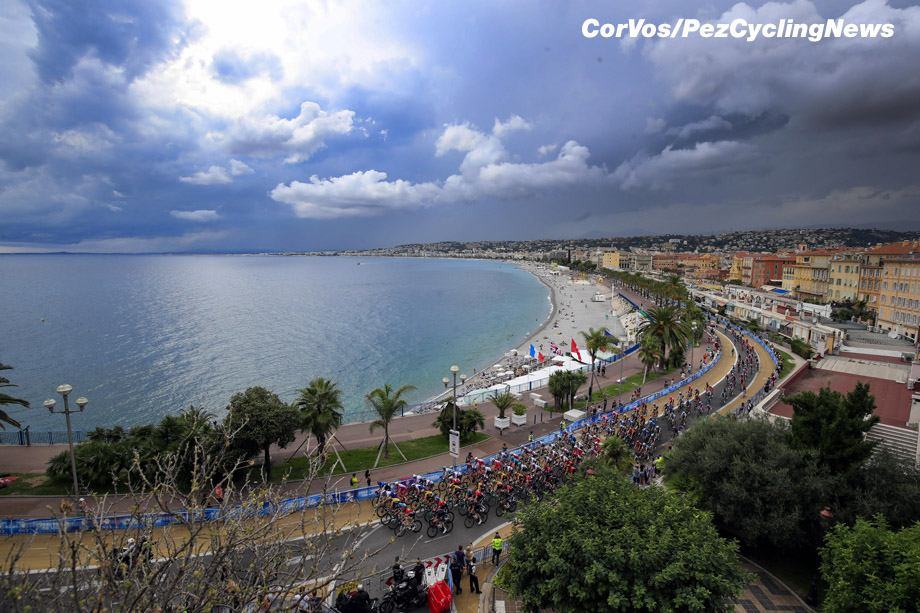 A wet day in the South of France

After Sivakov fell for a second time, there was another big crash going through Nice. Richie Porte, Mikel Nieve and Andrey Amador were among the riders who touched the tarmac. The next crash saw Caleb Ewan and Jumbo-Visma riders Robert Gesink and Sepp Kuss on the ground. New Euro champ Giacomo Nizzolo also went down. 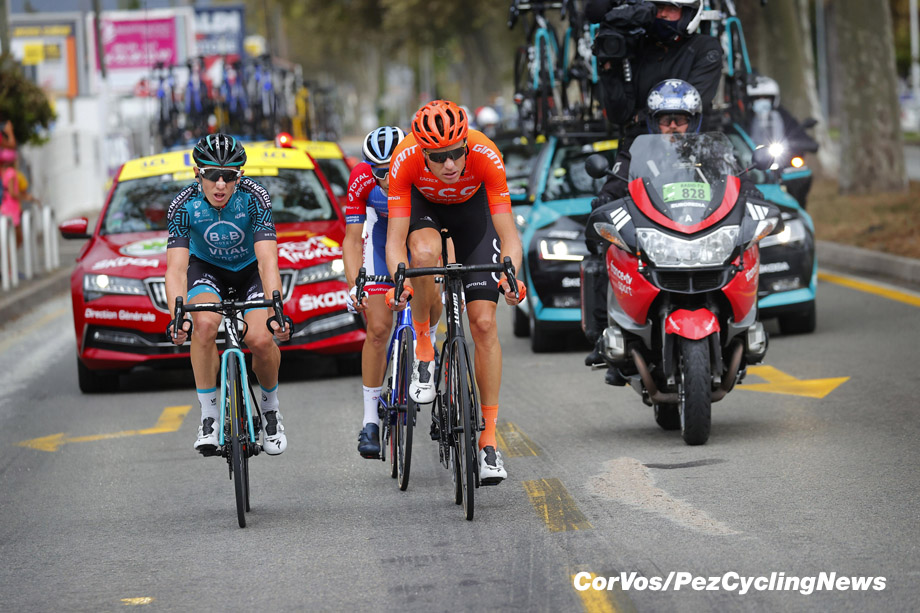 The break didn’t go all the way

During the second climb of the Côte de Rimiez, Grellier was dropped and Gautier and Schär extended their lead to 2:30 on the peloton. In the battle for the mountain points, Schär started the sprint early, and took full points, but it was soon all over for the escapees. A regrouping followed 54 kilometres from the finish. Schär would later be awarded the prize for most combatitive rider. 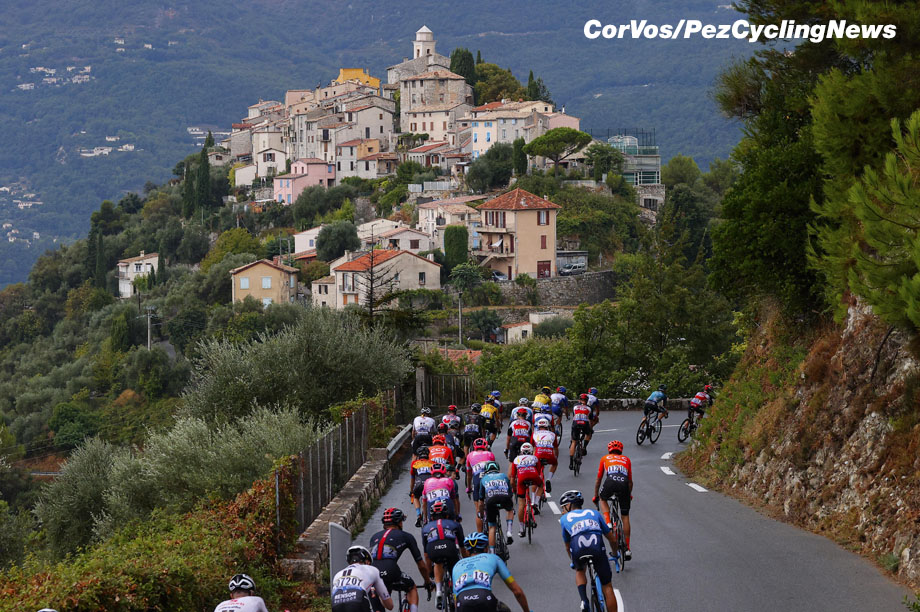 The pace dropped for the peloton due to the dangerous condition. Tony Martin urged the peloton to calm down, after which the riders continued the ride side by side. This did not mean the crashes were over. Astana took the initiative again on the dangerous descent of the Turini, this was a big mistake as Miguel Ángel López skidded and hit a post, but luckily was able to continue. 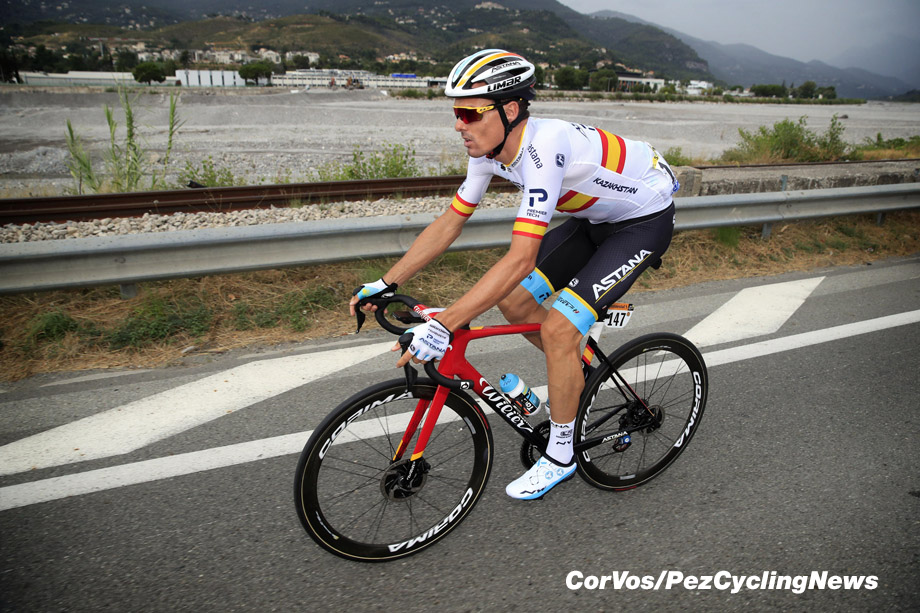 The riders of the Kazakh team were told to take it easy by the others, including Primoz Roglic. Despite the calmness in the peloton, riders kept falling. George Bennett of Jumbo-Visma fell just before a tight bend and lost contact with the peloton and had to chase. 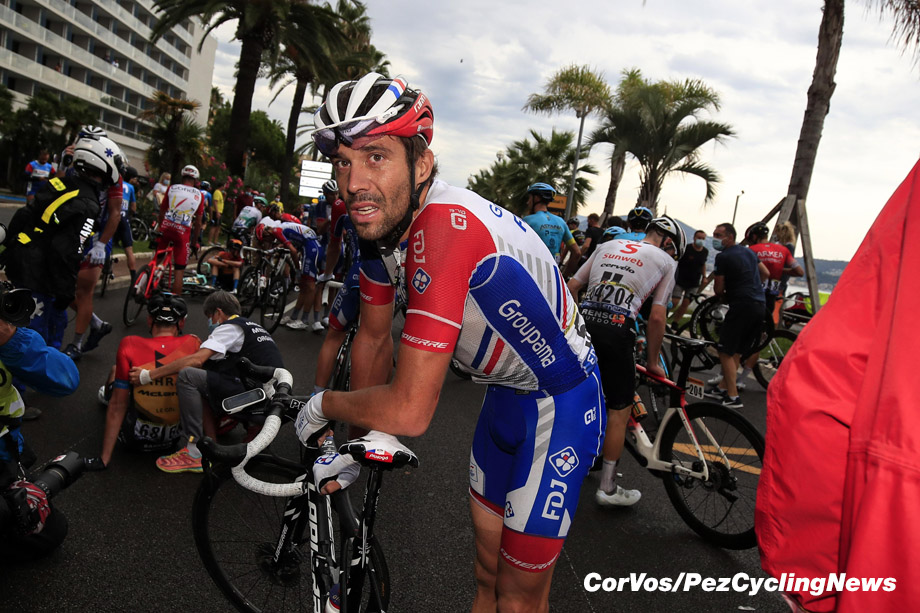 A less than happy Thibaut Pinot

In the end there was still a race. Benoît Cosnefroy (AG2R-La Mondiale) went on a solo attack, which was short-lived. With 13 kilometres to go, he was caught up by the peloton. The GC teams formed trains to bring their leaders to the line in safety. After the overall time was taken at 3 kilometre point, the sprinter teams took over.

Kristoff had the strength and experience

A big crash then caused the peloton to split. The French Tour hope Thibaut Pinot was among the victims. In the battle for the day win, Sam Bennett was brought to the front by Deceuninck – Quick-Step teammate Mørkøv, but it was the strong Norwegian Kristoff who held off the World champ Dane; Mads Pedersen. Tour debutant Cees Bol finished third. Kristoff was very pleased to take the yellow jersey after his fourth Tour stage victory. He is the second Norwegian ever to wear the yellow along with Thor Hushovd. 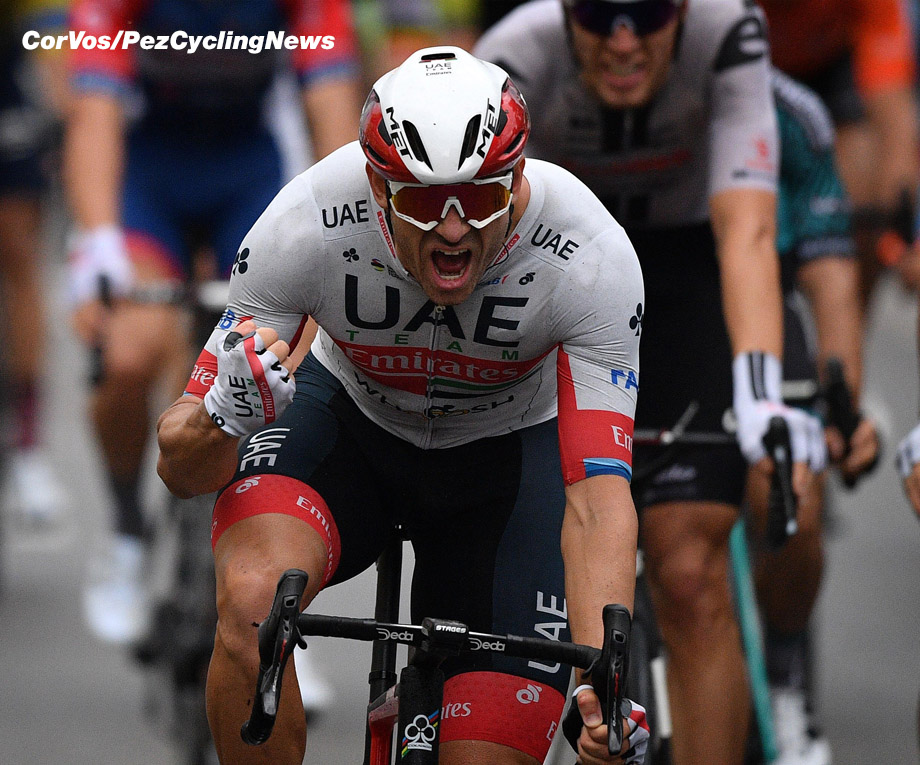 A big wet win for Kristoff

Tomorrow the Tour takes a different route in the Nice area. There is a lot of climbing with two Cat 1 cols on the menu.

Stage winner and overall leader, Alexander Kristoff (UAE Team Emirates): “It’s a dream to wear the yellow jersey, I don’t think you can ask for anything better. The team came here to aim for the General Classification and some sprint stages. I was hoping, but I didn’t think I would win so early. Today I was riding well and I was able to give my best on the final straight, realizing that I was in the frame for a win. I stayed in the wheels for a while, coming out on the right in the final and, when I realized it was the right moment, I pushed hard. In the past few months I haven’t been able to give my best and I also crashed at the European Championships, so being here celebrating is a great feeling.”