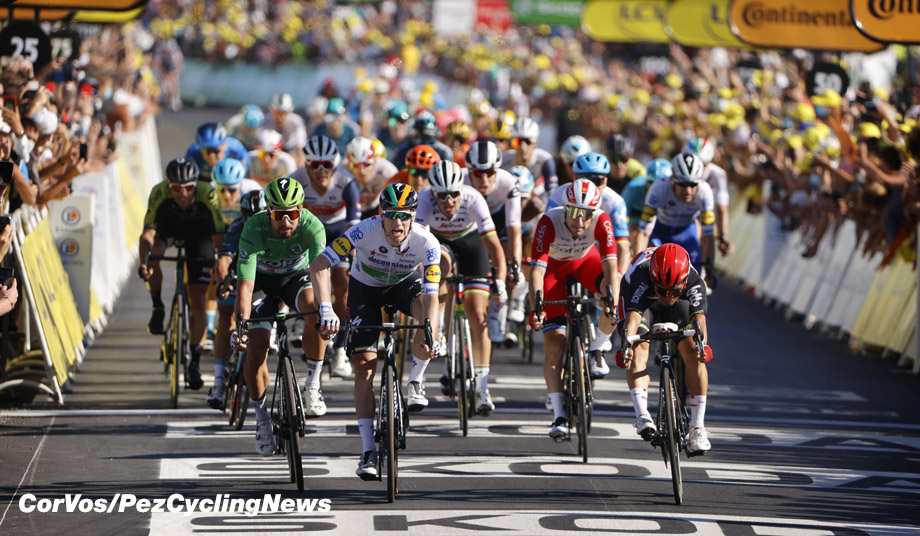 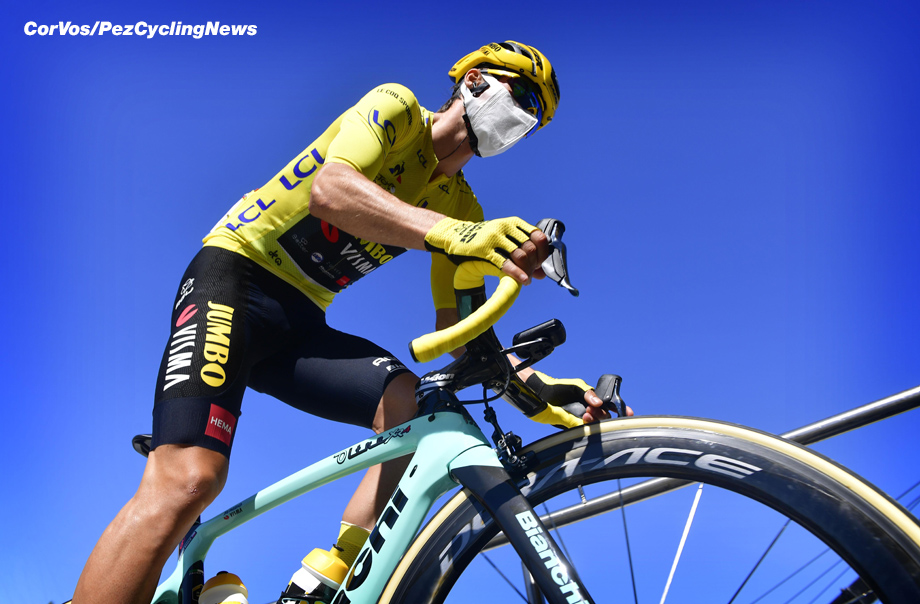 Stage 10 Route:
Tour director, Christian Prudhomme describes the stage: “Two islands linked by a stage of the Tour, that’s already a first for the peloton that will find it hard to make it bunched to Saint-Martin-de-Ré. The stage will be marked by the Vauban buildings in Royan, Rochefort or La Rochelle, but also by a course mainly set by the sea… and the crossing of marshlands swept by wind.” 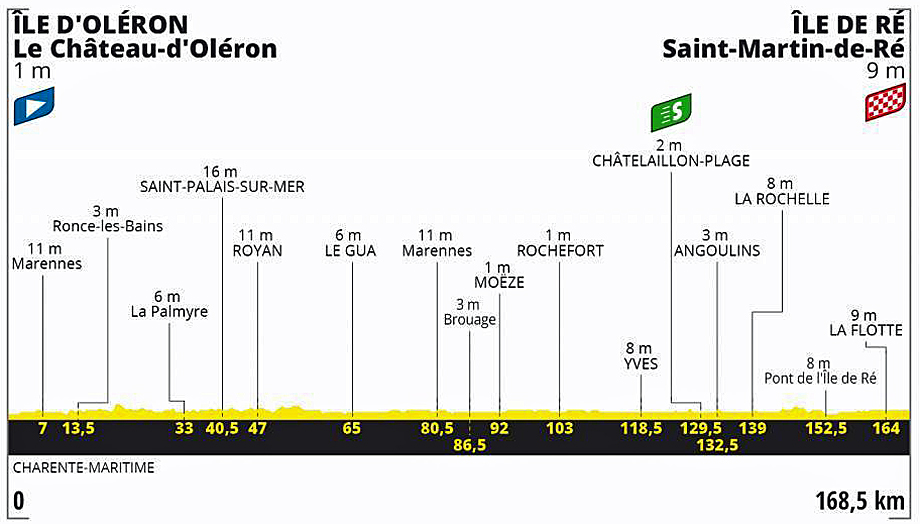 The good news is that all riders were found negative, the bad news is than Tour boss Christian Prudhomme and four staff members from Cofidis, AG2R La Mondiale, INEOS Grenadiers and Mitchelton-Scott respectively had to leave the Tour de France after a positive test. 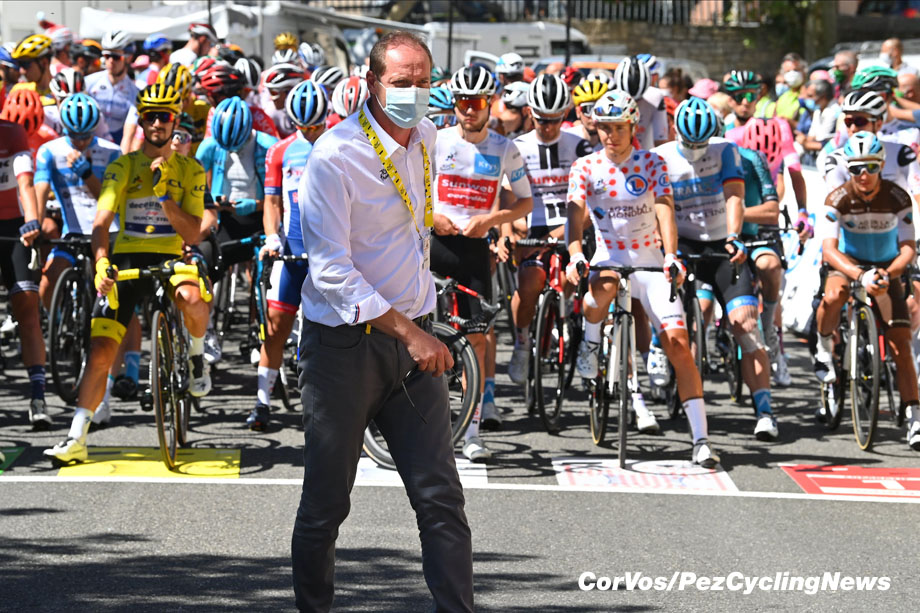 All the riders where found negative for Covid-19, not so the Tour boss, Christian Prudhomme

Shortly after the start, two Swiss riders tried to get away from the peloton, which was looking forward to a second day off. Stefan Küng and Michael Schär soon managed to get a lead of 2 minutes, but they did not really get much of a lead. In the peloton we soon saw the men from Lotto Soudal and Deceuninck-Quick-Step on the front of the peloton. 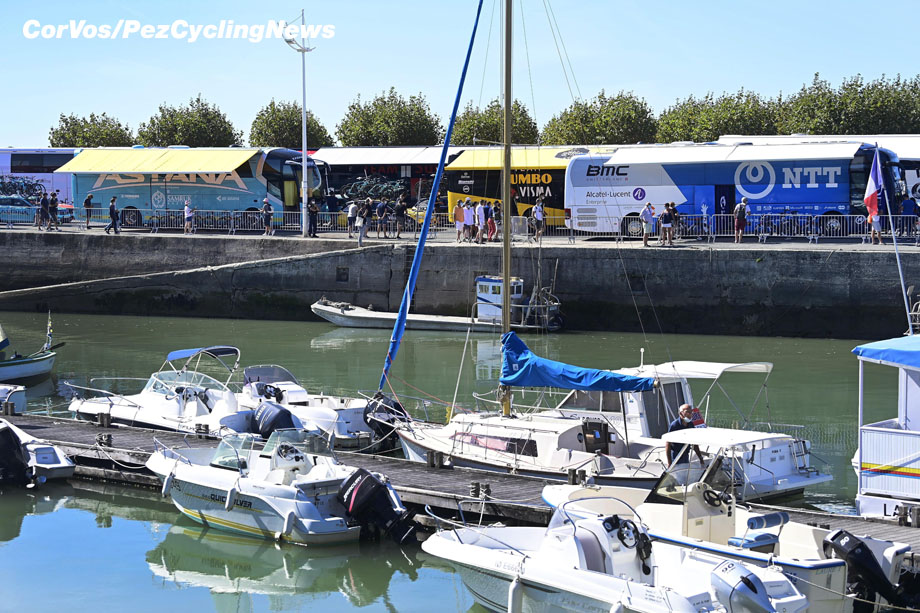 The start at the port

The difference, with 100 kilometres to go was only 30 seconds. In the peloton, the teams were very nervous about any echelons, although the wind was far from perfect for an echelon split day. Nevertheless, Deceuninck – Quick-Step tried to bring things together. The peloton was drawn to a ribbon and the lesser riders were blown out, but it didn’t really split. The tension in the peloton reached a boiling point and not much later there was a big crash with Sam Bewley, Robert Gesink and Nicolas Roche. 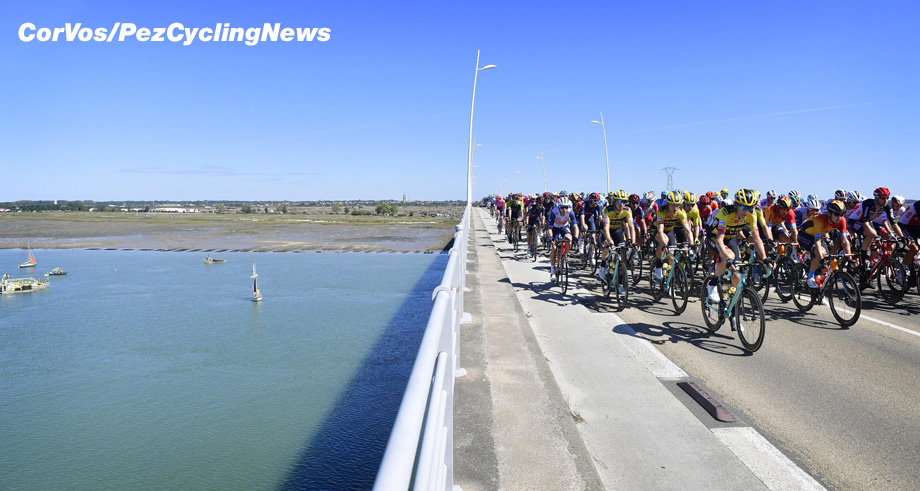 The peloton leaves the Île d’Oléron

Gesink and Roche were able to continue after some delay, but Bewley had to give up. In the peloton we still saw Deceuninck – Quick-Step in the lead, but the Belgian team decided to take the foot off the gas pedal. This brought peace back to the peloton, early breakaway Küng and Schär had already been caught. 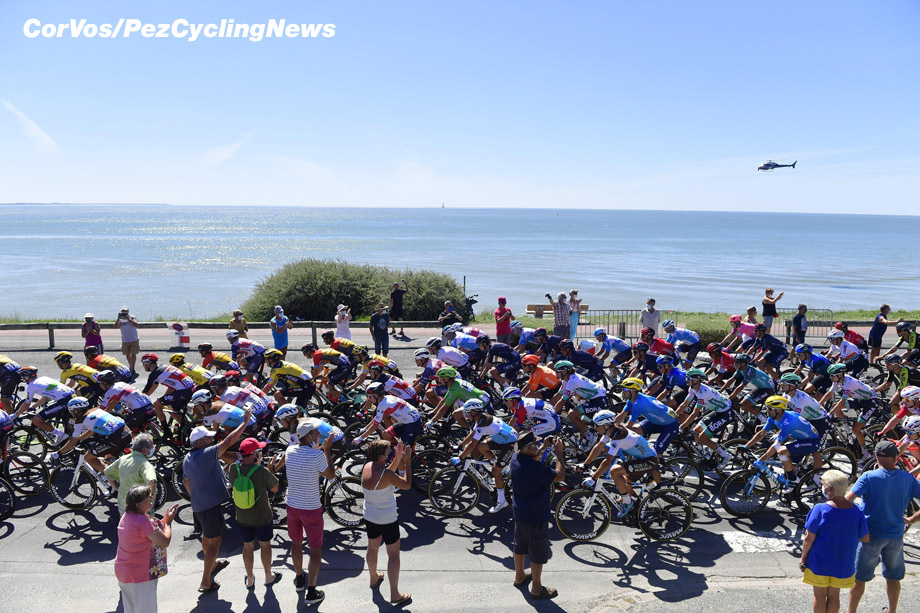 A day at the beach

After the first crash, the riders eased off, giving the fallen and dropped riders the chance to return. However, the peloton continued to take echelons into account and so the narrow French coastal roads remained crowded. The riders could not avoid a second crash, 64 kilometres from the finish, and this time Tadej Pogačar and Guillaume Martin were the most famous victims. 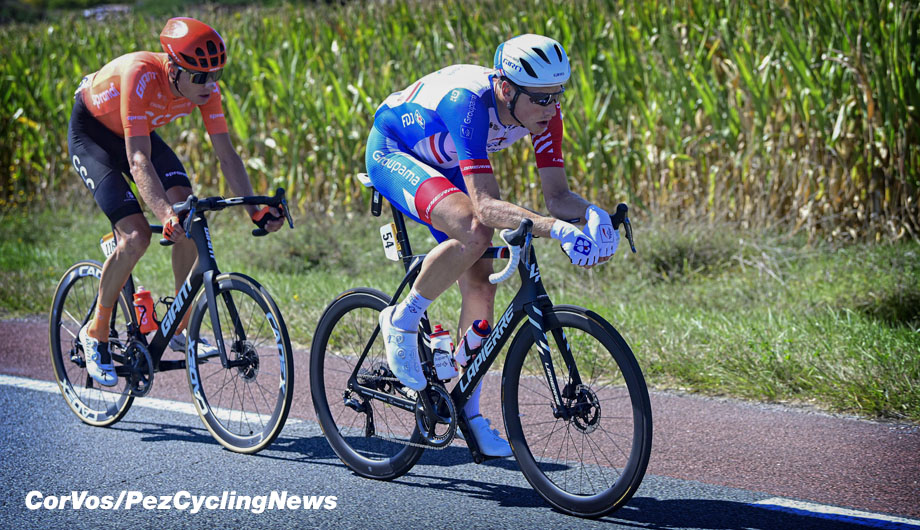 Pogačar and Martin came out of the crash relatively unscathed and soon got back to the front again, but Davide Formolo had a lot of scrapes. Calm returned to the peloton, although the riders rode hard to the intermediate sprint, 45 kilometres from the finish, in Chatelaillon-Plage. Matteo Trentin took the full points, ahead of Peter Sagan and Sam Bennett. 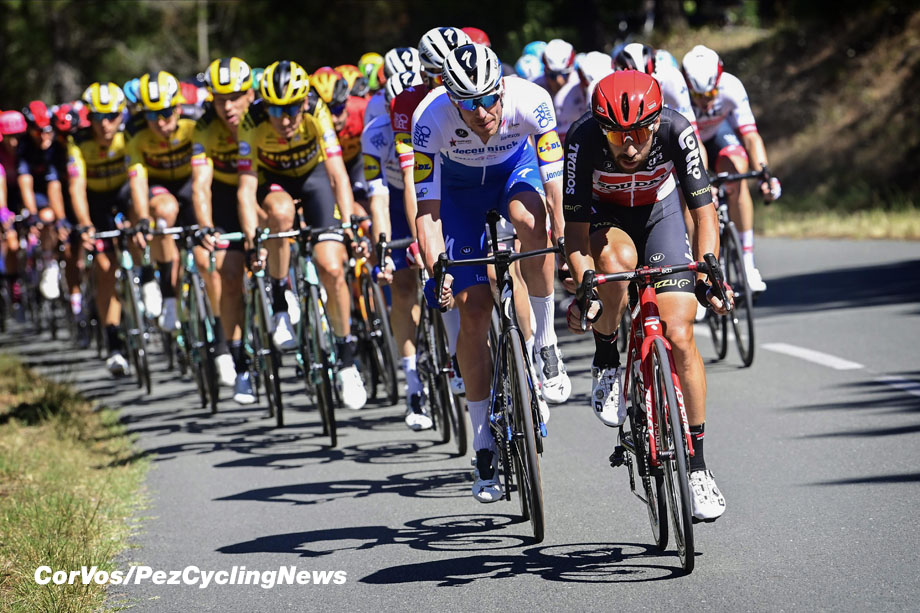 With 35 kilometres to go, Jumbo-Visma were not at the front of the peloton, they watched it all from the second row. INEOS Grenadiers, EF Pro Cycling, Deceuninck – Quick-Step and Bahrain McLaren were in the lead. The peloton raced towards the bridge to the finish on the Île de Ré, where the wind was blowing. Warren Barguil had to chase before the bridge, after a crash with a Arkéa-Samsic teammate. 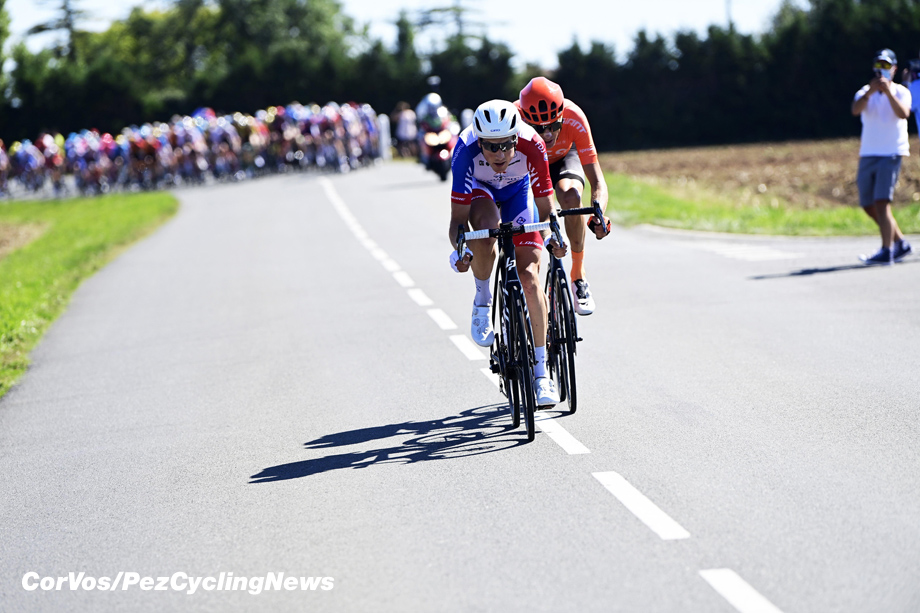 The break was eventually pulled in

In the last 30 kilometres, the riders had to race along the coast, on narrow and treacherous roads. New crashes and echelons were constantly lurking, and so we saw the classification riders move forward with their trains. INEOS Grenadiers took over command with 20 kilometres left and this turned out to be the start of a new echelon battle between the best teams. 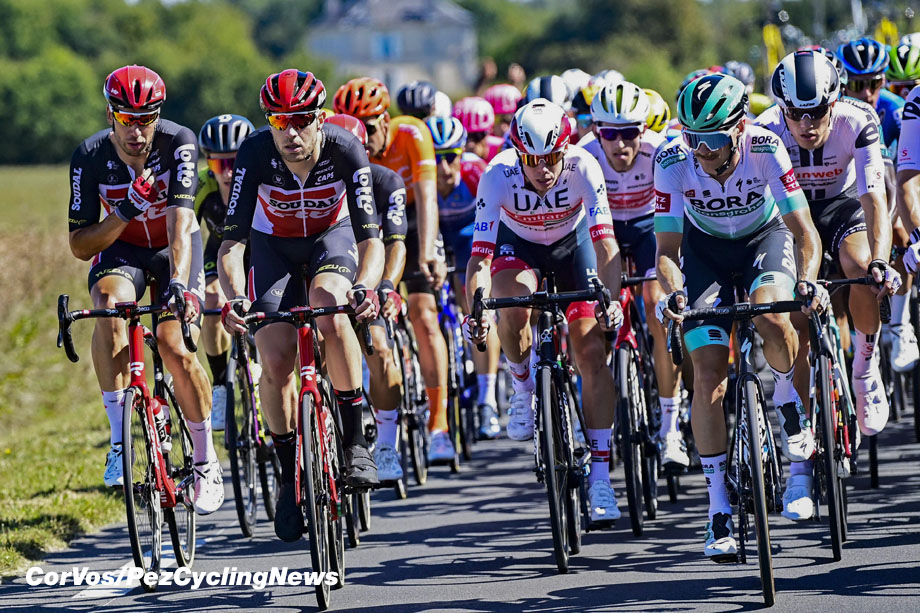 The sprinter’s put their men on the front

At 18 kilometres out, the peloton split again after another crash. CCC’s Jonas Koch seemed to be the biggest victim, but Julian Alaphilippe, Miguel Ángel López and Alejandro Valverde were also held up by the crash. There was still enough time for López and Valverde to reconnect, as the wind was not ideal. 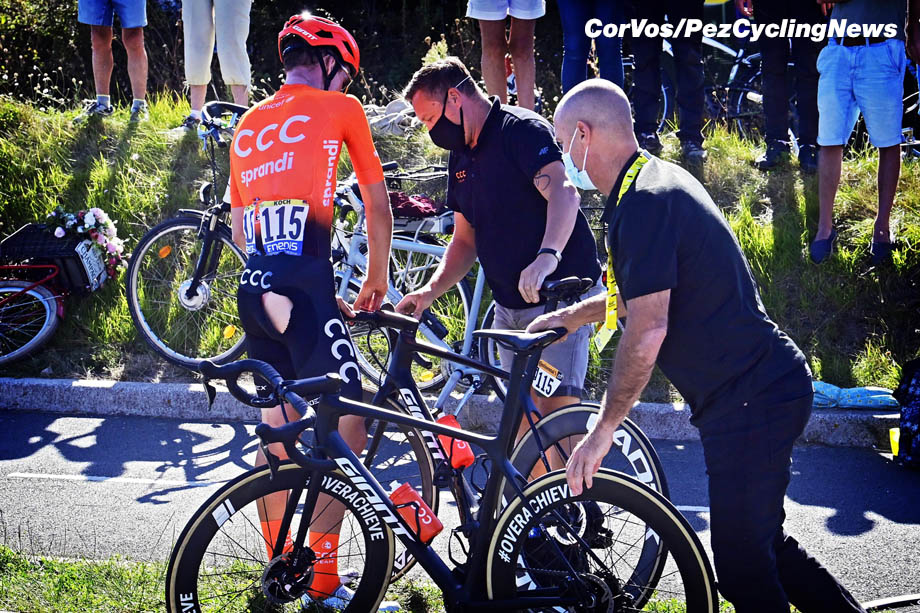 In the now thinned peloton, no team wanted to take control, so everything came back together and we started the last 10 kilometres in groups. Jumbo-Visma settled in the lead again with man-in-form Wout van Aert and Norwegian fast-man Amund Grøndahl Jansen. In the final kilometres there were no echelons, so there was a reduced group sprint after a hectic stage. 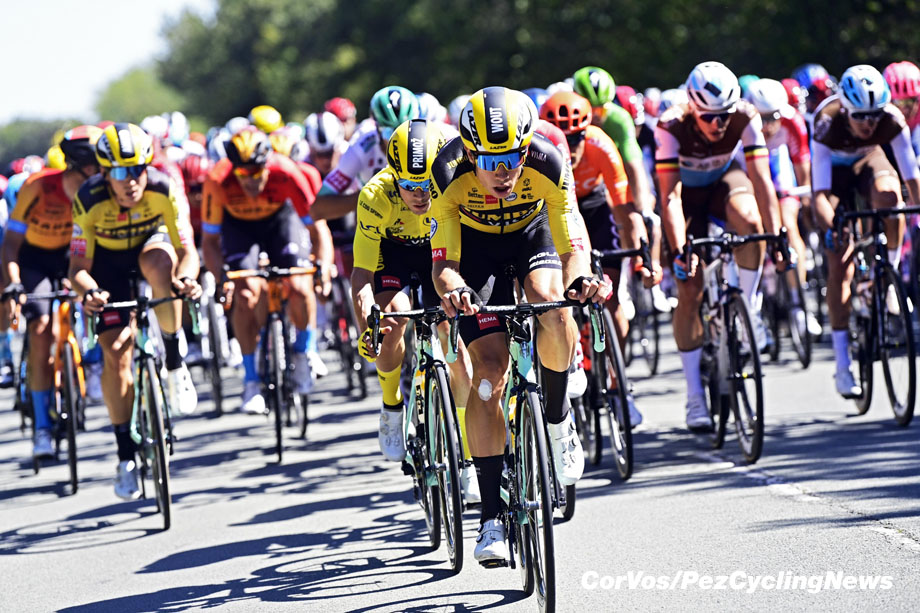 Van Aert on the front again

Sunweb tried again today to provide an ideal lead-out for sprinter Cees Bol. The train of the German formation looked impressive, but Sunweb took the lead just too early to pilot Bol to victory. Sam Bennett turned out to be the fastest sprinter after a lightning-fast final. This time Ewan had to settle for second place, Sagan crossed the line third. 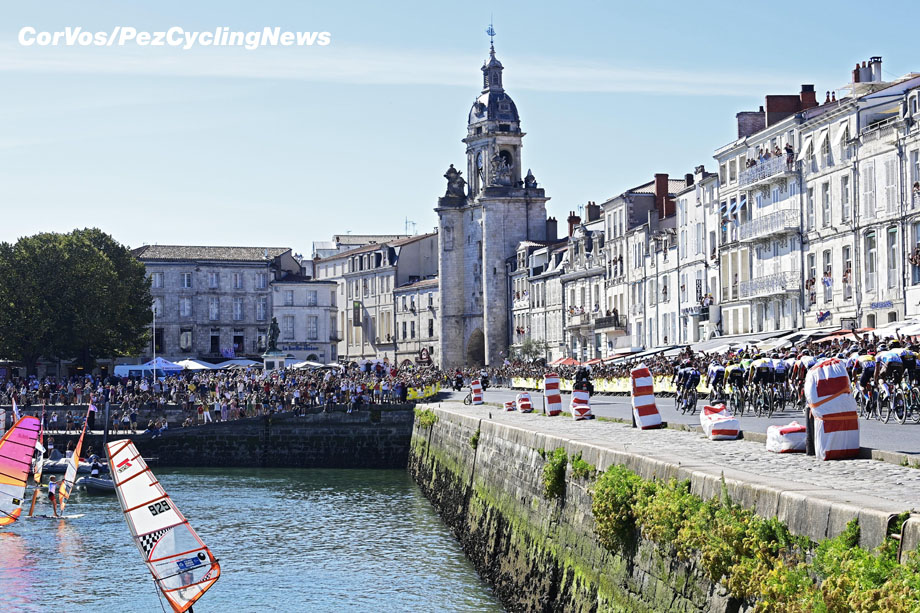 For the Slovakian it is his best stage result in this Tour, but he still had to hand the green jersey to stage winner Bennett. There are no changes in the overall rankings. Roglic is still in the yellow jersey tomorrow 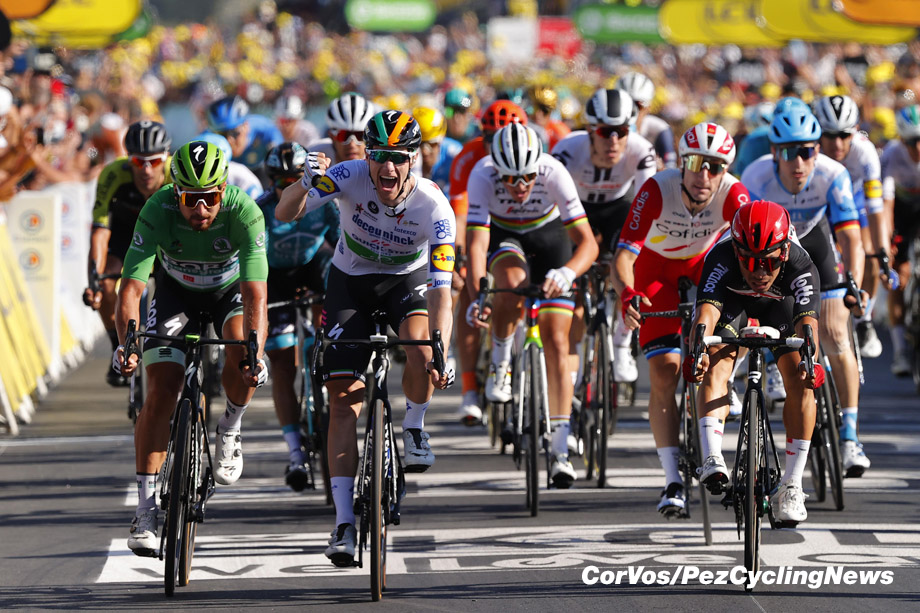 Stage winner and green jersey, Sam Bennett (Deceuninck – Quick-Step): “I’m just in shock. I want to thank the whole team and particularly Patrick [Lefévère] who gives me this opportunity to be here. It has taken a while, but I always dreamt of winning a Tour de France stage and I couldn’t imagine what it’s like. I thought it wouldn’t happen. In the sprint, I was waiting to go because there was a head wind. I thought maybe I waited too late. I had a too big gear for winning… but I won!” 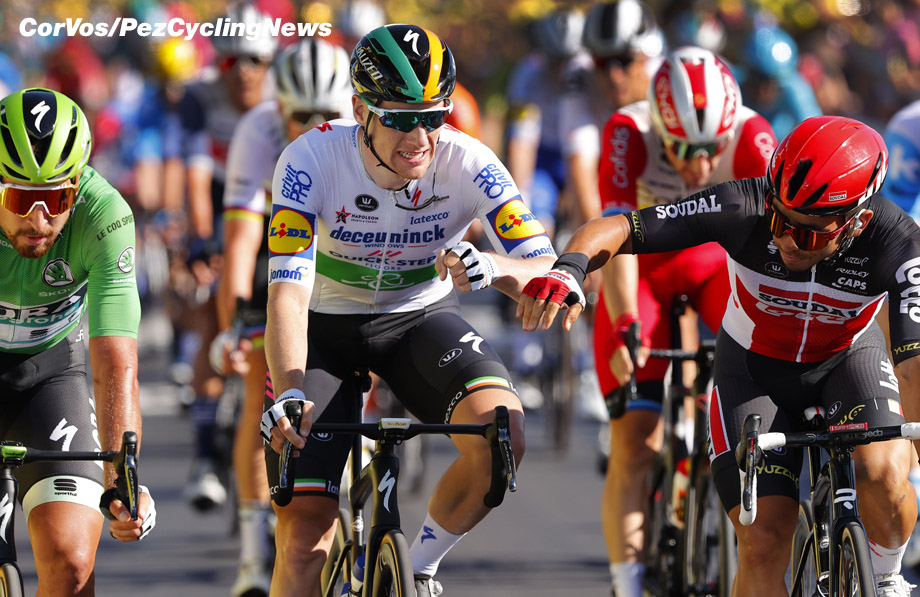 And the green jersey

Overall leader, Primož Roglič (Jumbo-Visma): “It was a quite nervous and stressful stage, from the start all the way to the finish. As a team, we managed it really well. My teammates did a great job and we can be happy we avoided crashes. Staying healthy and in one piece is key on a grand tour. Hence it is very important to always be well positioned in the bunch, in order to avoid trouble and contend for the race. The level of Slovenian cycling is crazy right now, especially for us. As if every single one of the 2 million people living in our country were top athletes! Slovenia has always been present in the international peloton, but never got the kind of results Tadej and I are delivering. I’m proud to be writing history for Slovenian cycling.”