Stage Report: Another day for the fast-finishers, but with a tricky run-in to the line. A late attack came to nothing and the peloton was launched up the final straight by Wout Van Aert (Jumbo-Visma), with Caleb Ewan (Lotto Soudal), Sam Bennett (Deceuninck – Quick-Step) and Peter Sagan (BORA-hansgrohe) on his shoulder. It was the little Australian who came out the winner. The overall was unaffected and Primoz Roglič (Jumbo-Visma) held the yellow jersey. After the finish, Peter Sagan lost his second place. 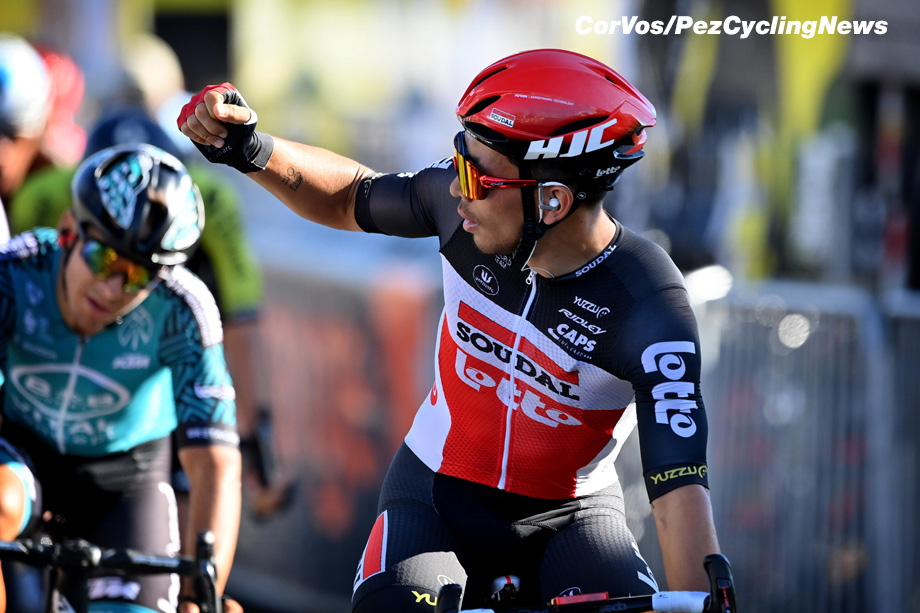 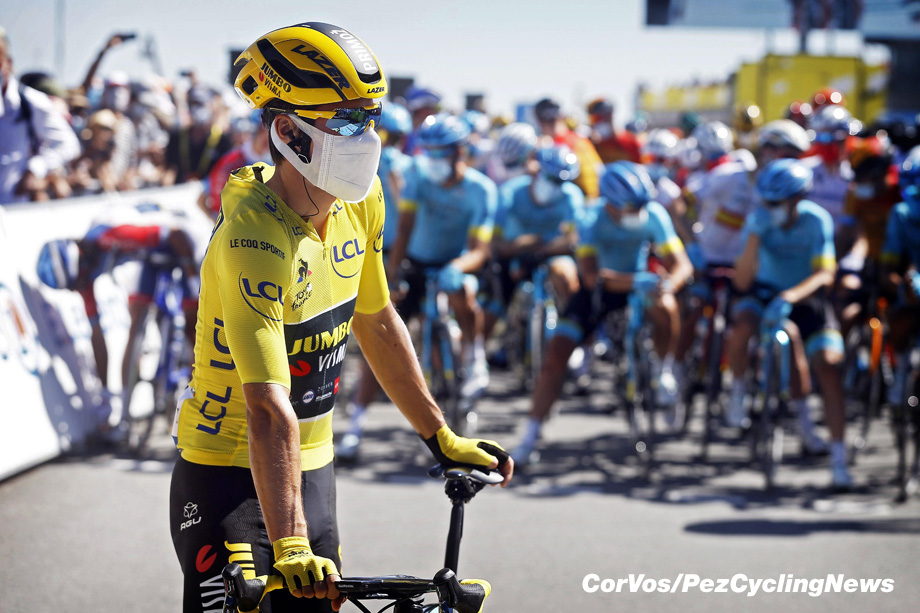 Another stage in yellow

Stage 11 Route:
Tour director, Christian Prudhomme describes the stage: “The Tour bids farewell to the ocean. The 2020 Tour leaves the coast and enters the deeper French territory through the marshlands of Poitou. The scene is set for a bunched sprint in Poitiers with a final 1.5-km straight.” 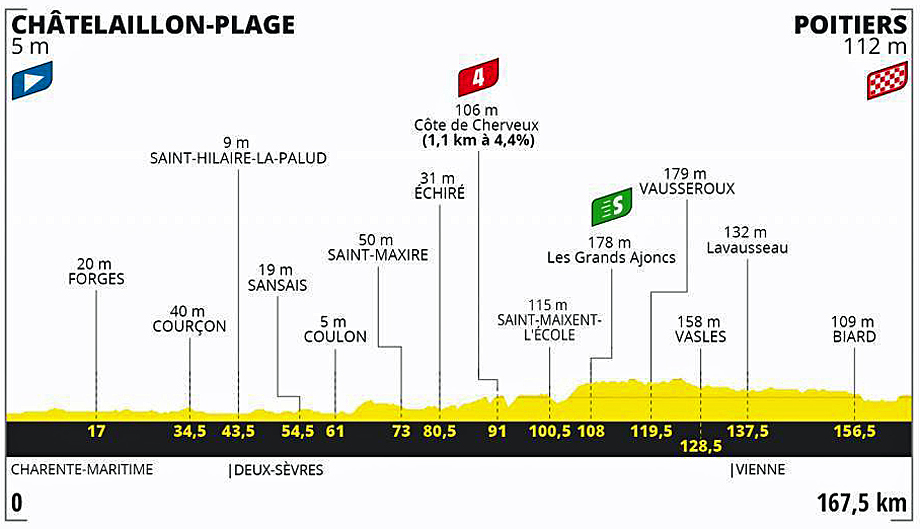 During the neutralised zone, Alexey Lutsenko, the stage winner on Mont Aigoual, Cyril Gautier and Ilnur Zakarin had a collision with a post on a roundabout. When everyone was back together, the race was started by François Lemarchand. The former professional took Christian Prudhomme’s place in the director’s car for the second day in a row. 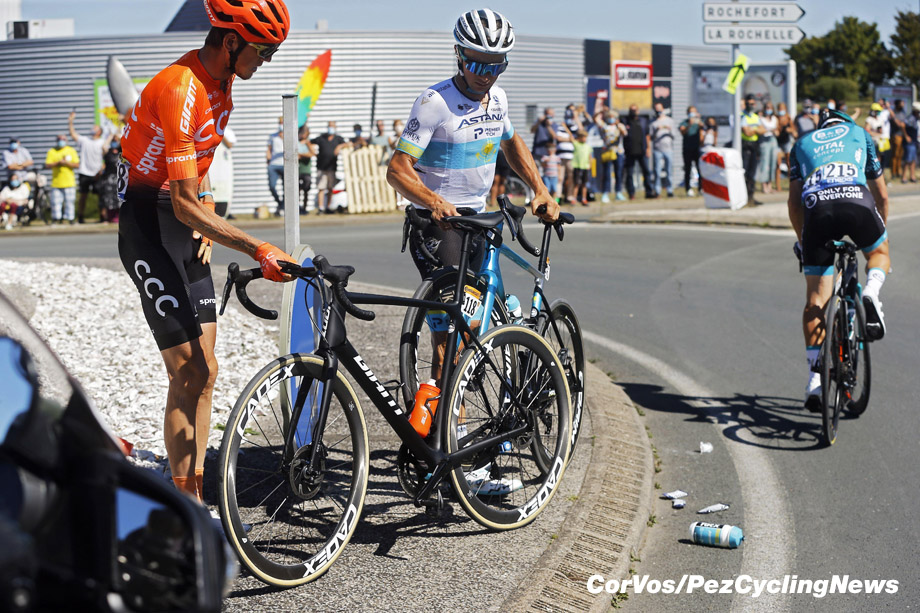 Early crash for Zakarin and Lutsenko

As soon as the flag dropped, Matthieu Ladagnous attacked and the experienced Frenchman, who is in his 15 season with Groupama-FDJ, escaped from the peloton. After 15 kilometres, junior World champion in Melbourne (2002) was 5 minutes ahead. After 20 kilometres Lukas Pöstlberger, Oliver Naesen, Stefan Küng, Jasper Stuyven, Tom Van Asbroeck and Michael Gogl counterattacked. 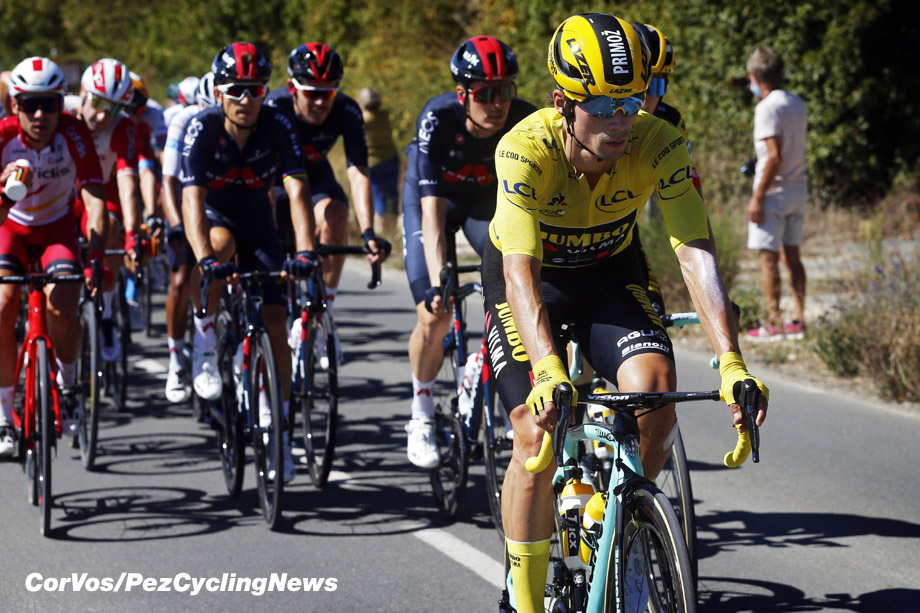 An easy day for Primoz Roglič

There was a reaction from the peloton, and Deceuninck – Quick-Step) pushed the pace up. They didn’t want the group of six to get away and so 10 kilometres further the counterattack was caught. The lone leader, Ladagnous, was down to a minute. When peace had returned, the Frenchman took more time. 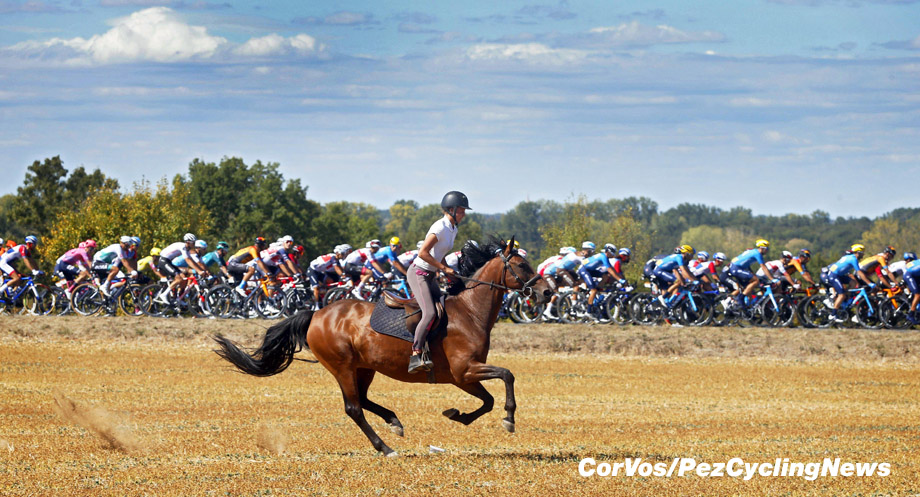 A lot of horse power

Deceuninck – Quick-Step and Lotto Soudal then kept the time difference stable at around 3 minutes, the route led through the Marais Poitevin nature reserve to the only climb of the day, the Côte de Cherveux. There Ladagnous picked up the only point, his first in this Tour de France. He also took the intermediate sprint. Sam Bennett was not concerned and crossed the line second, ahead of his teammate Michael Mørkøv and Peter Sagan. As a result, the Slovak saw his Irish competitor lose four points. 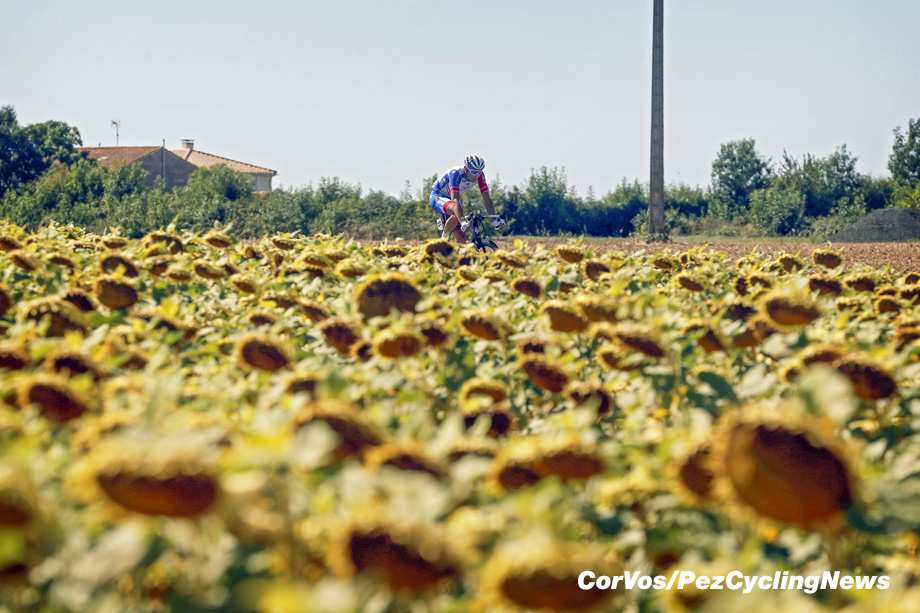 Once Ladagnous had taken the intermediate sprint, he eased up and dropped back to the peloton. After 125 kilometres he was caught and 43 kilometres remained to the line in Poitiers. Soon after the Tour lost its fourteenth rider since the Grand Départ in Nice. Gregor Mühlberger had been behind the peloton all day and stopped at 37 kilometres from the finish. 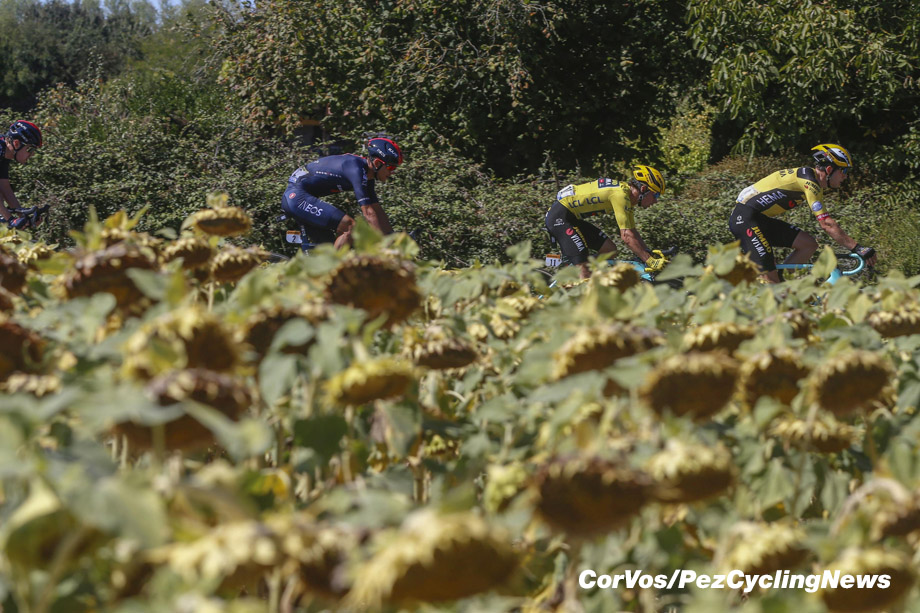 A day off for Roglič and the peloton

At 30 kilometres out, Astana’s Ion Izagirre crashed. The Spaniard, a stage winner in the Tour in 2016, was taken to hospital with facial injuries and a broken collarbone. The peloton then started to ride hard to Poitiers. The fast pace of Lotto Soudal, for Caleb Ewan, saw a few riders go out the back. 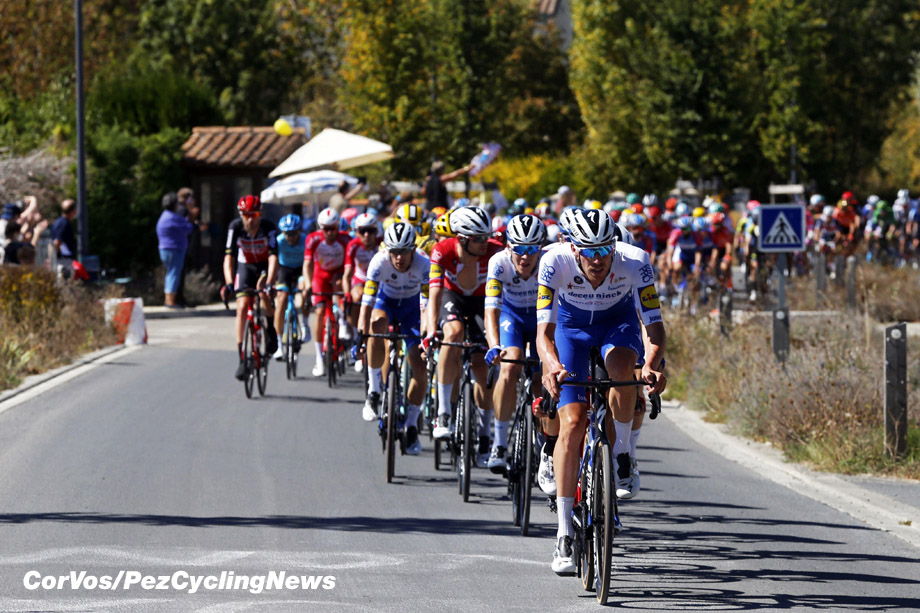 The Tractor – Tim Declercq working on the front

Six kilometres from the finish, Lukas Pöstlberger shot from the large leading group, to be joined by a duo of Deceuninck – Quick-Step riders; Kasper Asgreen and Bob Jungels. Instead of sitting in the wheel of the Austrian, Asgreen and Jungels rode with him at ‘full gas’. Lotto Soudal was put under considerable pressure. 3 kilometres from the finish, Asgreen was dropped by his two co-attackers, who had a gap of around 6 seconds. 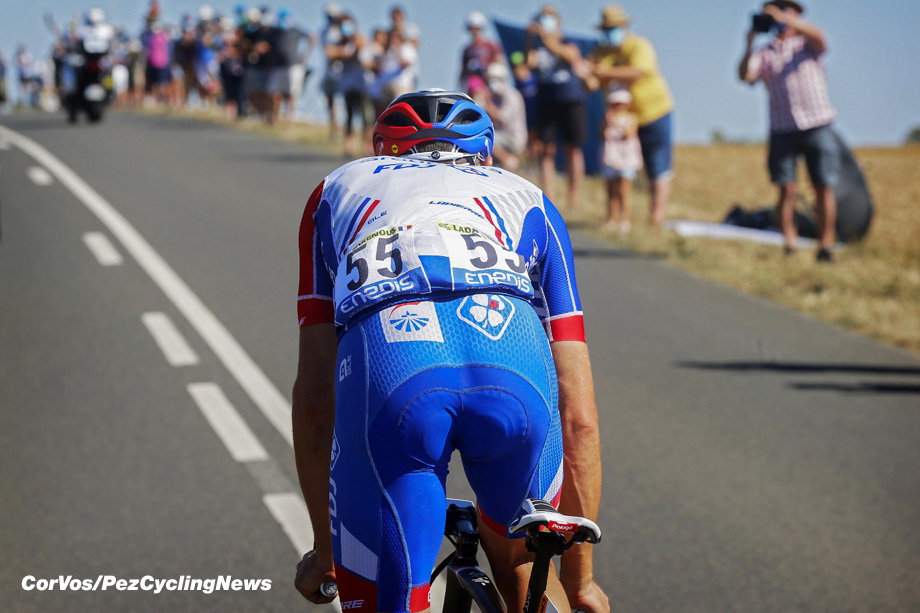 Ladagnous was out front for the day 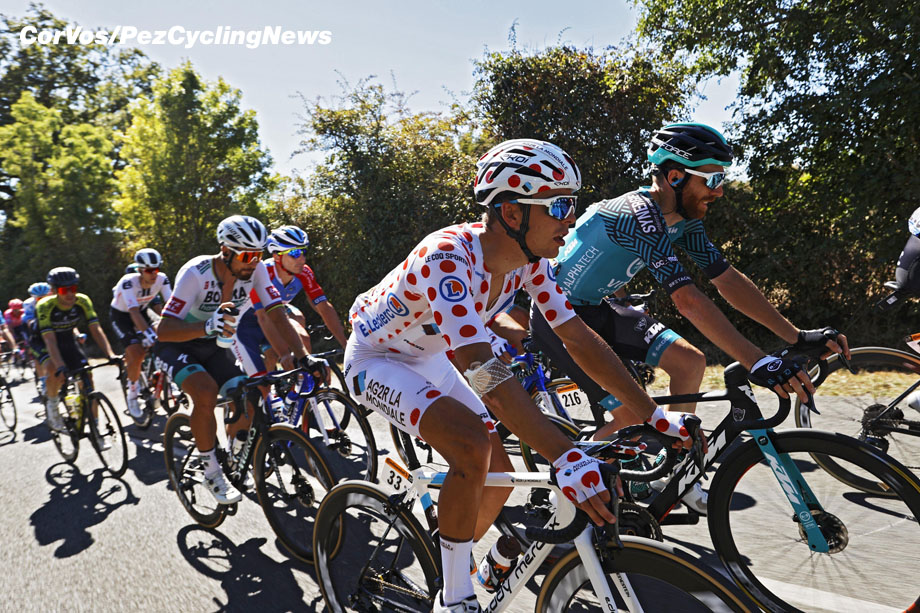 There wasn’t much for KOM, Benoit Cosnefroy, to go for

Lotto Soudal did not have to close the gap on their own as they received help from NTT Pro Cycling and Cofidis. At the start of the last 2 kilometres, the late breakaway was caught. Wout van Aert again joined the battle for the victory. For a moment it looked like he had it, until Peter Sagan saw a gap on his right and pushed passed the Belgian. A few seconds later, Caleb Ewan was able to push his front wheel across the finish line ahead of Sagan and Bennett. 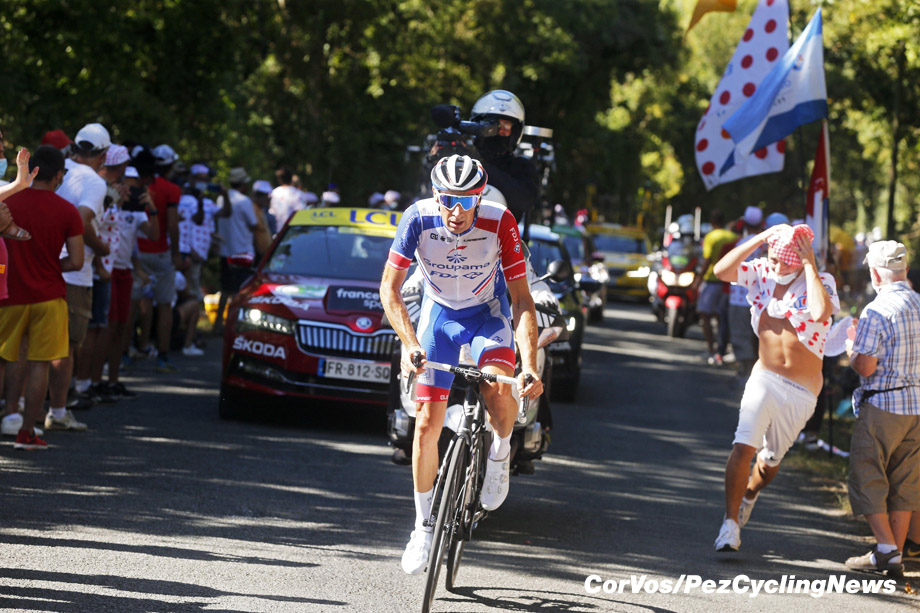 As expected, it was eventually all over for Ladagnous 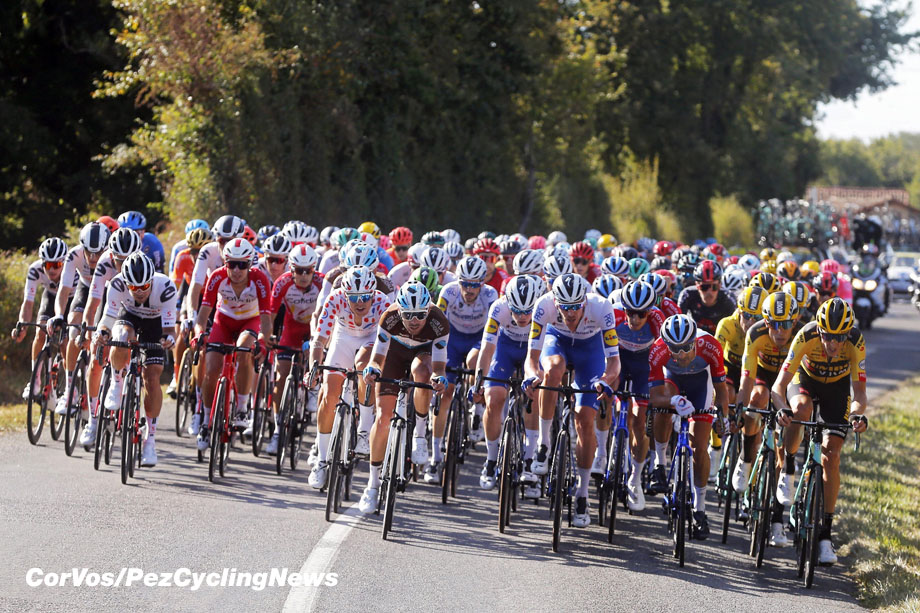 The race came alive for the final battle

Peter Sagan was downgraded after the stage. In the final sprint, the Slovak was seen to have pushed Wout van Aert by the jury. He was moved from 2nd place to 85th in the result. 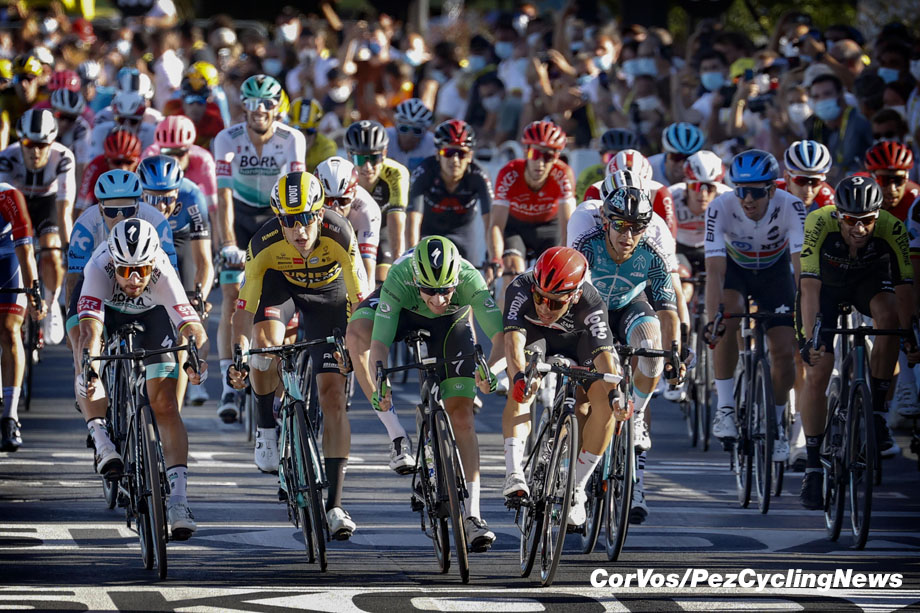 Stage winner, Caleb Ewan (Lotto Soudal): “It’s been a very hectic sprint. I went too close to the front with 2km to go. I found myself more forward that I wanted to be so I dropped back. It was quite crazy. From the first stage I won, I learned to stay calm. The pressure is off since but I just had a strong desire to win after losing yesterday. I wanted to win for my teammates. I saluted just in case I’d won but I wasn’t really sure. Sometimes you feel you have won, it’s quite close today. I’m super happy with two stage wins, but now I want the third one in Paris.” 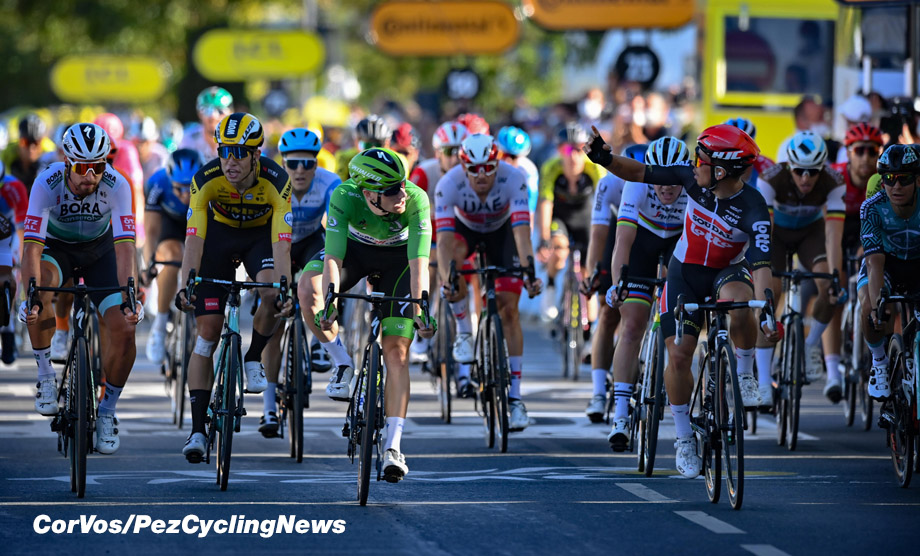 Win for Ewan – Not good news for Sagan

Overall leader, Primož Roglič (Jumbo-Visma): “It is true that wearing the yellow jersey you shall never be caught sleeping, nor make any mistake. We have to remain very focused during the whole stage. It’s difficult to stay out of trouble with a whole bunch, especially in the finish… But team does a great job at that. Wout van Aert is an exceptional rider, but it isn’t only him. Everyone in this team does his part. This is why we have the yellow jersey. If you start to think about what can go wrong, a lot of things can happen… So we don’t. Everyone in the team focuses on his job for the day, and it goes well like that. Let’s keep it that way.”

Build Resilience and Thrive in Adversity