Stage Report: After showing his style at the weekend, young Sunweb rider Marc Hirschi confirmed his class with a stunning stage 12 win, crossing the finish line solo for his first Tour stage win. The longest day in the saddle was no snore-fest with action from the start. Primoz Rogilč (Jumbo-Visma) finished in the peloton to hold yellow. 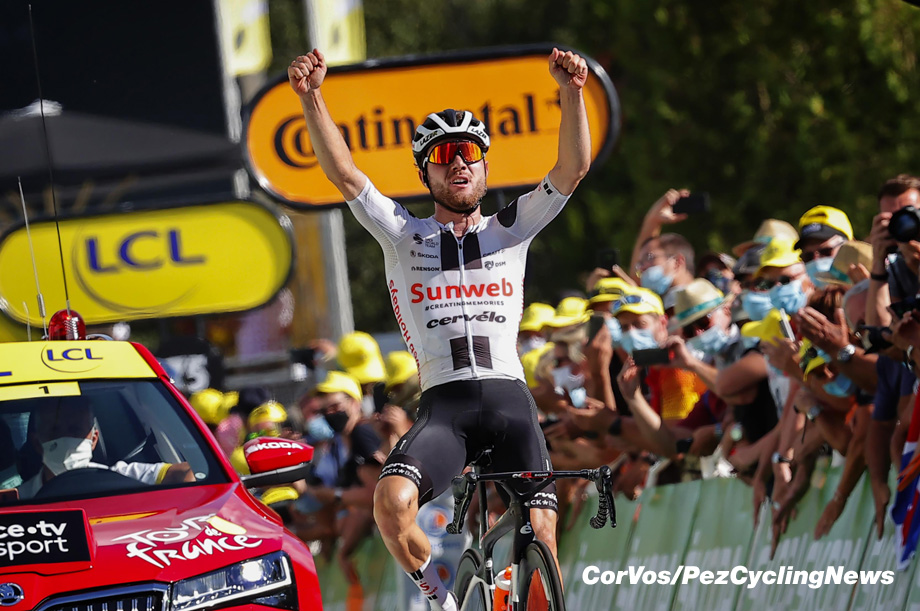 At last, the big win for Marc Hirschi 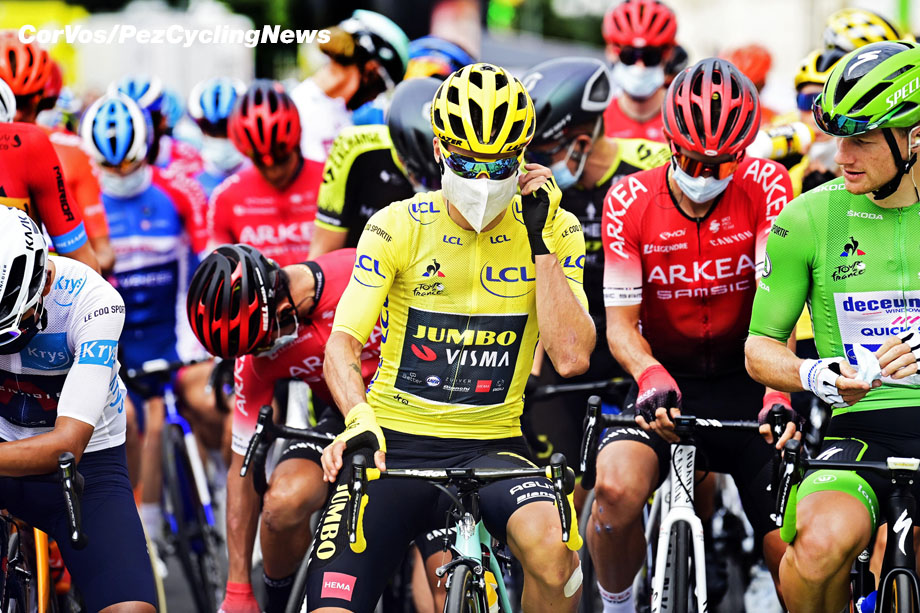 A long day ahead for Primoz Roglič

Stage 12 Route:
Tour director, Christian Prudhomme describes the stage: “The longest stage of the 2020 Tour will first take the riders on the roads of the Vienne and Haute-Vienne areas. But it’ll be in Corrèze that the most ambitious could give it a go on the final difficulty, the Suc au May that shows up on the course when the legs will be heavy.” 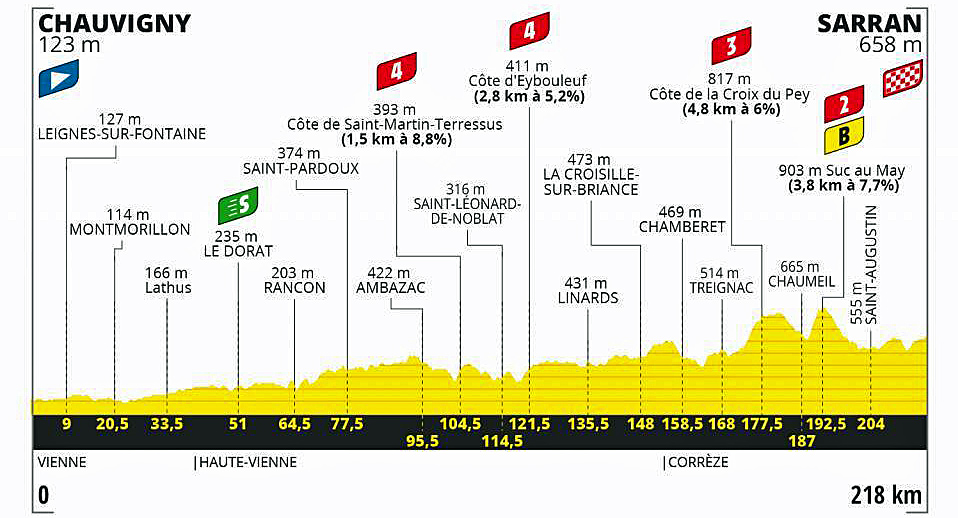 Deputy Tour director François Lemarchand waved the start flag to the signal for many riders to attack. Matteo Trentin, world champion Mads Pedersen and Thomas De Gendt were in the first moves, as were Peter Sagan and Sam Bennett. The Slovak and Irishman are engaged in a battle for the green jersey and so Bennett jumped on the wheel of Sagan. 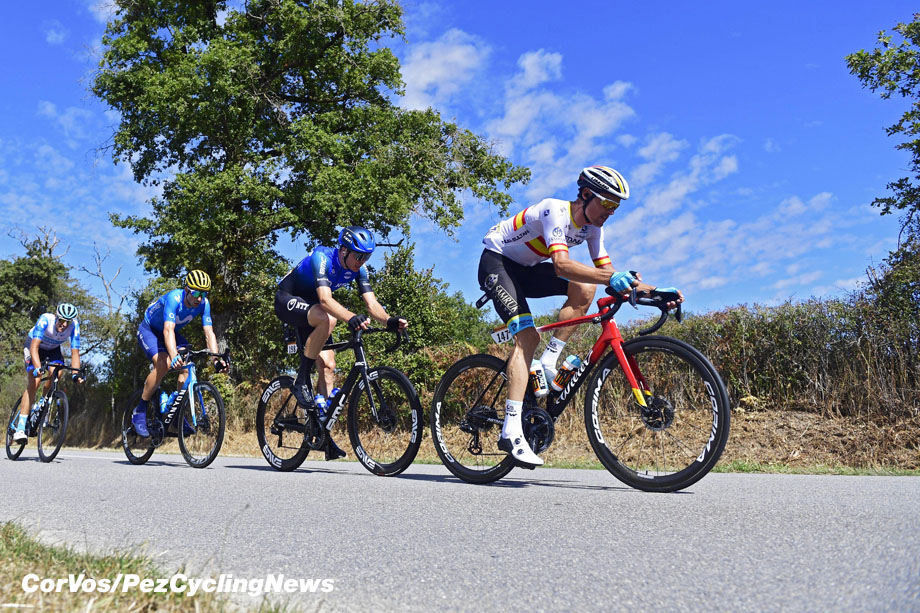 The first attacks failed, but after 10 kilometres four riders got away. Imanol Erviti, Luis Léon Sánchez, Nils Politt and Max Walscheid managed a one minute lead after a lot of hard work. Behind; several riders tried to crossing, but it was Kasper Asgreen and Mathieu Burgaudeau who managed to catch the front group with 154 kilometres to go. The six leaders hit the first climb of the day, the Côte de Saint-Martin-Terressus, Cat 4. Their lead was limited to 2 minutes, as the BORA-hansgrohe men pulled the peloton. 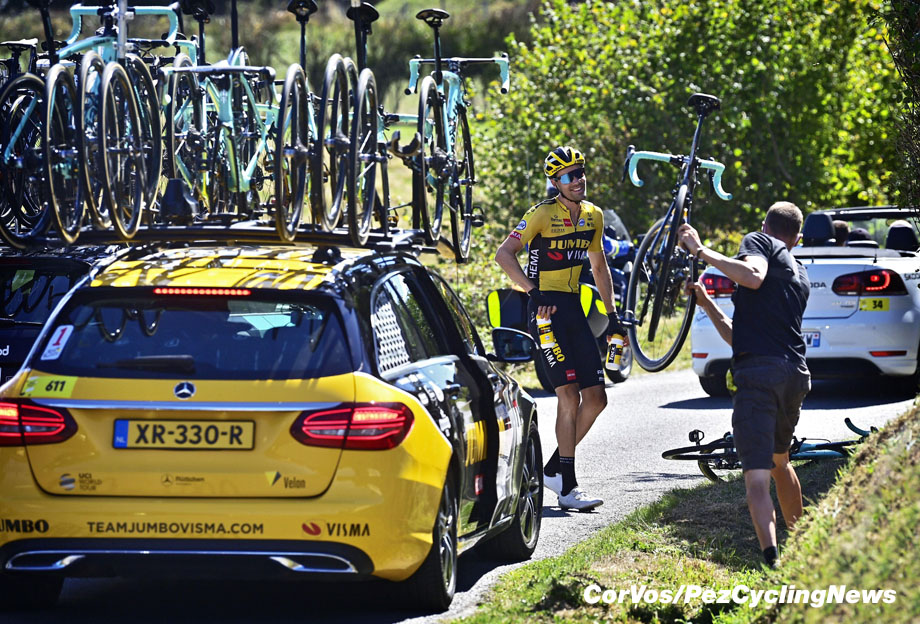 A day after his much-discussed sprint in Poitiers, Sagan seemed to be racing with feelings of revenge. The Slovak let his teammates do the bunch work, but BORA-hansgrohe had support from the men of CCC. The Polish team were working for Greg Van Avermaet and Matteo Trentin, although the team lost Ilnur Zakarin, suffering from a rib fracture. 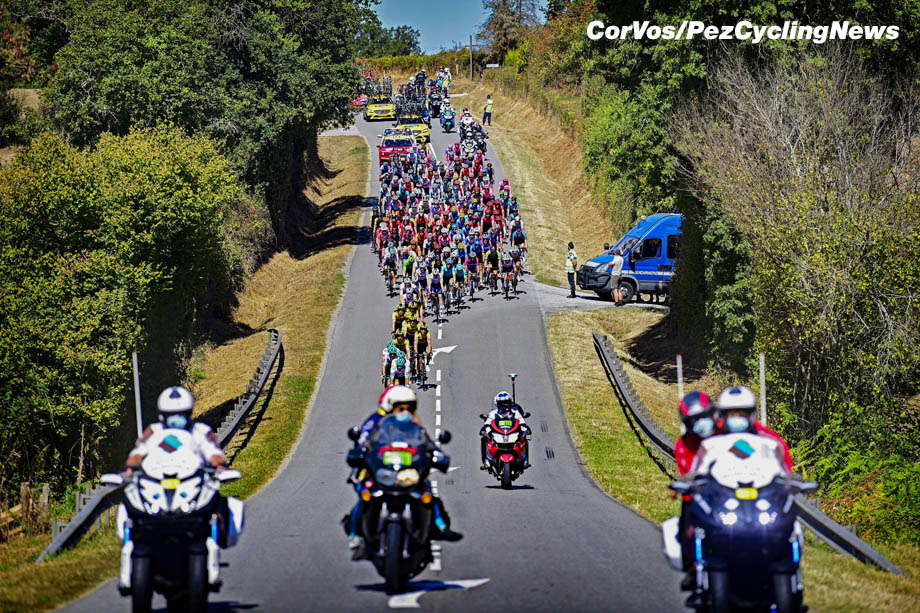 With 114 kilometres to go, the six escapees started the Côte de Saint-Martin-Terressus, one kilometre later Burgaudeau picked up the first mountain point of the day. The race then headed for Saint-Léonard-de-Noblat, the town of Raymond Poulidor, who died last year. The inhabitants of the town had done their utmost to remember PouPou. 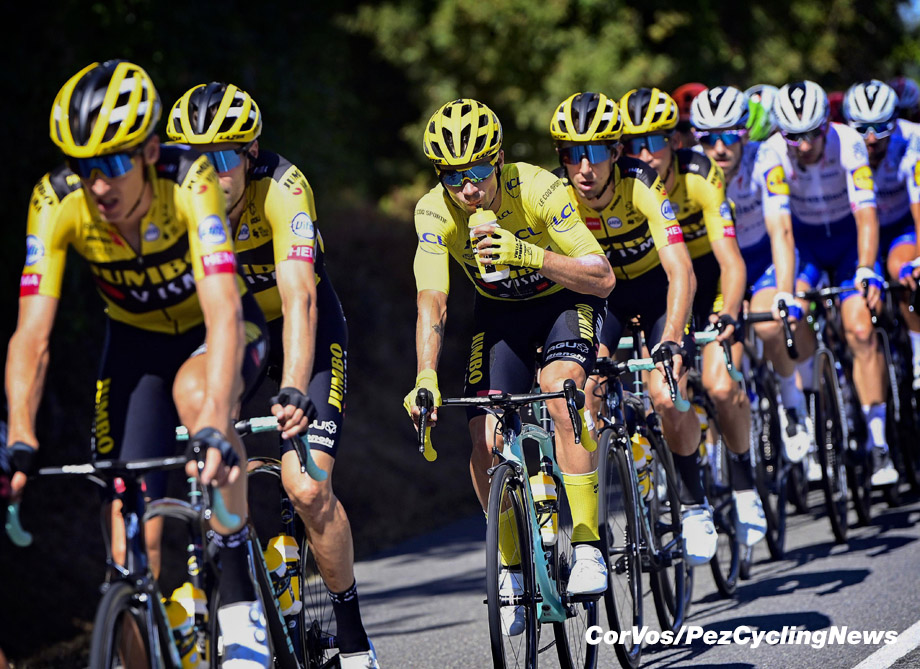 Jumbo-Visma were in control early in the stage

The riders continued to the second climb of the day, the Côte d’Eybouleuf, Cat 4, the summit is 96 kilometres from the finish. Burgaudeau was first again on this almost 3 kilometre long climb. Nils Politt decided to leave the leading group, but the tall German was immediately countered. Due to the acceleration of Politt, the cooperation in the leading group started to falter, so that the difference to the peloton was only 30 seconds with 50 kilometres to go. Asgreen tried to go on his own, but Erviti was able to close the gap and ride with the Danish champion. The two attackers rode hard to the base of the next climb. 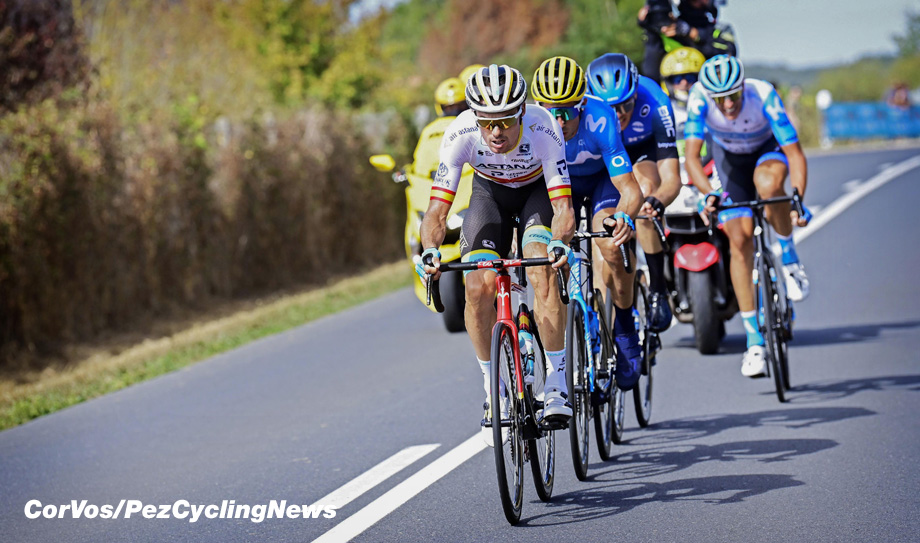 The break had no chance

In the large peloton the speed increased on the run-up to the Côte de la Croix du Pey (4.8 km at 6%), and riders were being dropped. Fast-men like Pedersen, Caleb Ewan, Elia Viviani and the green jersey, Sam Bennett had to let go. For Sagan, there was now a lot at stake, as he was able to narrow his loss in the points classification. The early escapees were caught by a few attackers on the Côte de la Croix du Pey. 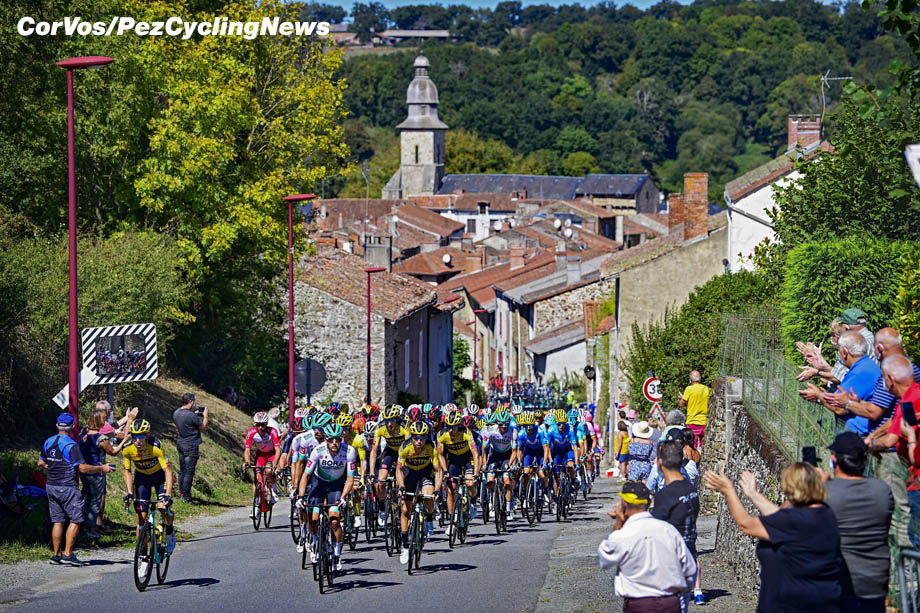 Not much flat road on stage 12

Sunweb put the pressure on the climb and gave Tiesj Benoot and Søren Kragh Andersen the freedom to attack. They were joined by Marc Soler, while more and more riders tried to get away from the group of favourites. After a disappointing first Tour week, Soler turned out to have good legs and took off alone, but was caught up by a group of attackers after collecting the mountain points. 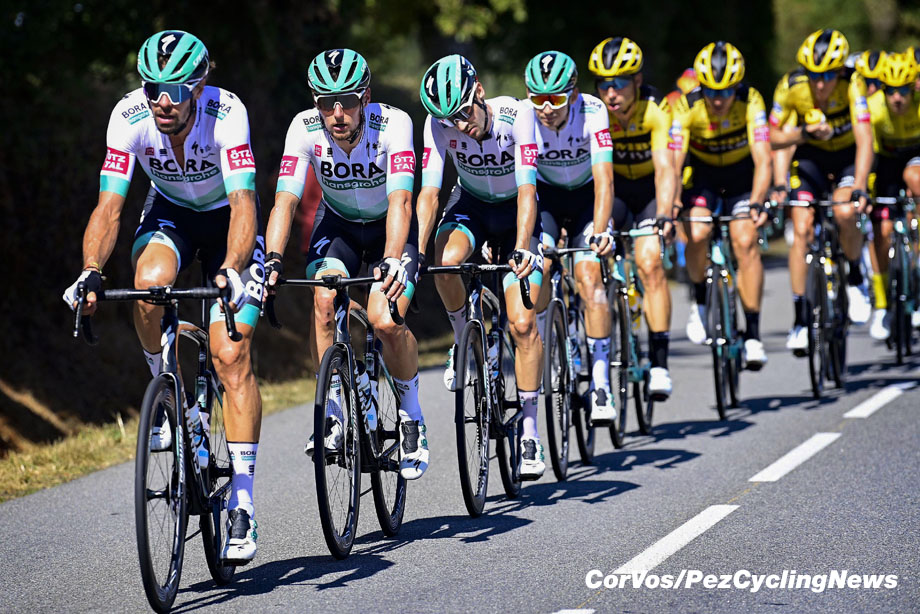 BORA-hansgrohe took over the peloton

Soler, Benoot, Kragh Andersen, Maximilian Schachmann, Marc Hirschi and Quentin Pacher, managed take a lead of 45 seconds on a chasing group with all the GC riders and strong classic riders such as Greg Van Avermaet and Matteo Trentin. Alejandro Valverde had some stressful moments after a mechanical, but the Spaniard managed to return to his position at the front in time. 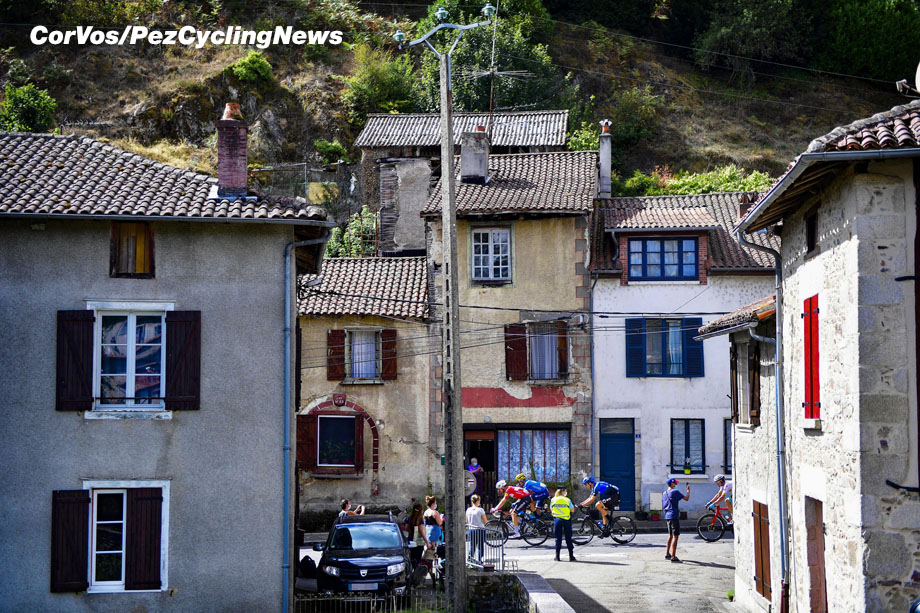 The break could enjoy the village

At the front the leading group started the last and toughest climb of the day, the Suc au May (3.8 km at 7.7%). This is where the race exploded. Soler again tried to ride away from his fellow attackers, but was countered by Hirschi. The very talented Swiss rider has already finished second and third in this Tour de France and wanted to cross the line first today. He made his move with 30 kilometres to go to the finish line. 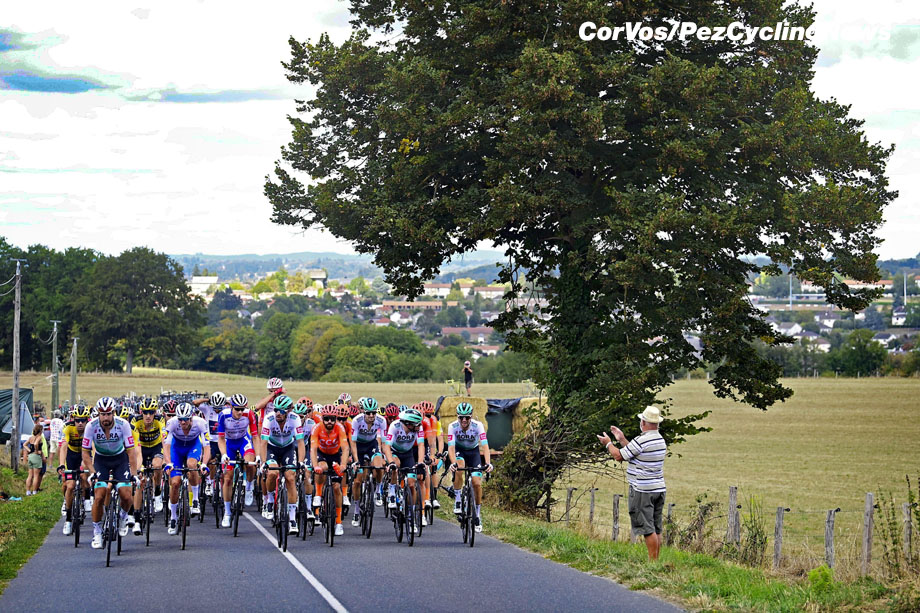 Most teams wanted in on the action

Hirschi was fast to the top of the very steep Suc au May, he must have been told in his earpiece that Julian Alaphilippe was in pursuit. The Frenchman still had a very strong Dries Devenyns, who tried hard to close the gap. Jesús Herrada, Pierre Rolland and Pello Bilbao were also in the group. 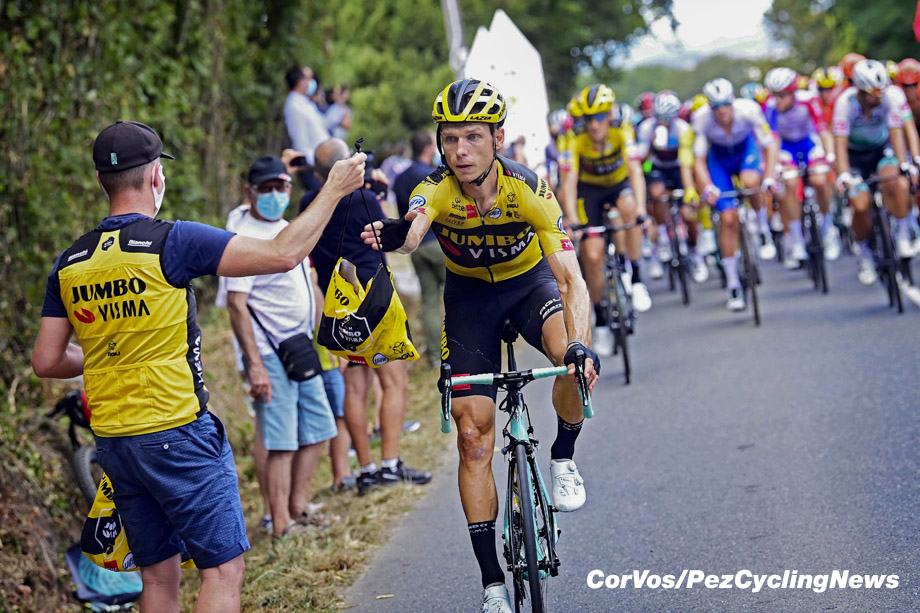 At the top of Suc au May, with 25 kilometres to go, the difference between the lone leader and the first pursuers, Soler/Schachmann, was about 20 seconds. The Alaphilippe/Devenyns group followed at 45 seconds, the group of favourites, with Sagan, was at 1:30. Jumbo-Visma controlled the pace and did not take any risks, as the Dutch team was not interested in the stage victory. 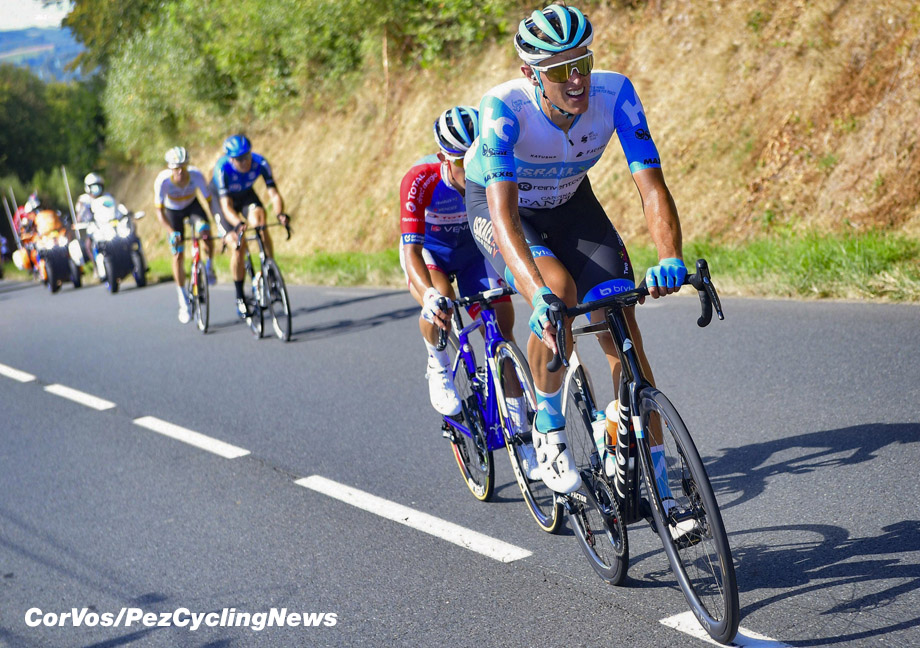 It was all over for the early break

On the technical descent of the Suc au May, Hirschi built up more of a lead. The young Sunweb rider dropped like a stone and the two pursuers lost more and more ground. In the third group Alaphilippe tried to breakaway, but the Frenchman proved not to be strong enough to escape the others.

Alaphilippe and his group managed to pick up Soler and Schachmann, but catching Hirschi was too much. The U23 Innsbruck World champion started the last 10 kilometres with a 45 second lead and that turned out to be enough to stay clear of his pursuers. Hirschi had plenty of time to enjoy his first Tour and pro victory. Pierre Rolland finished in second place, ahead of Kragh Andersen. 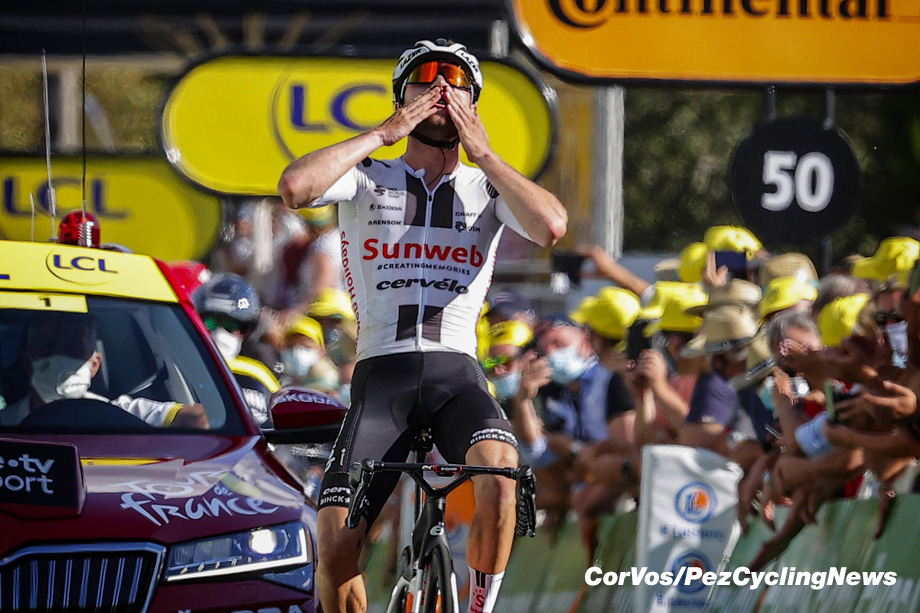 Yellow jersey wearer, Roglič came in with the other GC riders, 2:33 after stage winner Hirschi, so no changes on the overall. 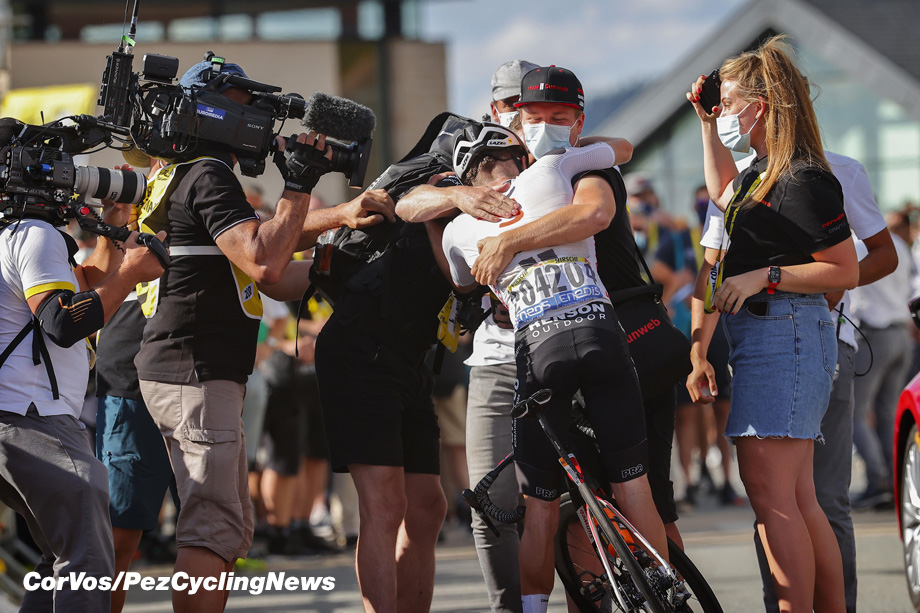 Stage winner, Marc Hirschi (Sunweb): “It’s unbelievable. Two times, I’ve been really close. I never thought I could win today. I went full gas in the last few hundred metres. I can’t describe my feelings. I’m lost for words. On the bike, I was always doubting I’d win. I had in my mind the picture of the last two times when I lost. To get my first pro victory at the Tour de France… it couldn’t have been any better. It’s incredible. In the Pyrénées, I got the confidence for trying to win today, otherwise I would have never attacked solo in that climb. What I did last week gave me this extra power. Two podiums and my first pro win at the Tour, it’s like a dream.”

Overall leader, Primož Roglič (Jumbo-Visma): “It was not an easy stage. At the beginning we expected the break to go up the road immediately, but there were riders from other teams pulling and attacking which delayed this. So it turned out to be far from a rest day for our legs… Actually, it’s been a good warm-up thinking of the mountains that we will tackle tomorrow. We expect tomorrow’s stage to be very hard – especially its final. It will be a new challenge for us.”

# Keep it PEZ for the best Tour coverage. #