Slovenia one and two overall

Stage Report: Another day of excitement on the 2020 Tour de France with two battles on the final Summit of the day. At the front it was between Dani Martinez (EF Pro Cycling) and Lennard Kämna (BORA-hansgrohe). Behind; Primoz Roglič (Jumbo-Visma) took the others on for the GC along with Tadej Pogačar (UAE Team Emirates. Martinez won the stage and Roglič and Pogačar gained time on the other hopefuls. Slovenia one and two overall. 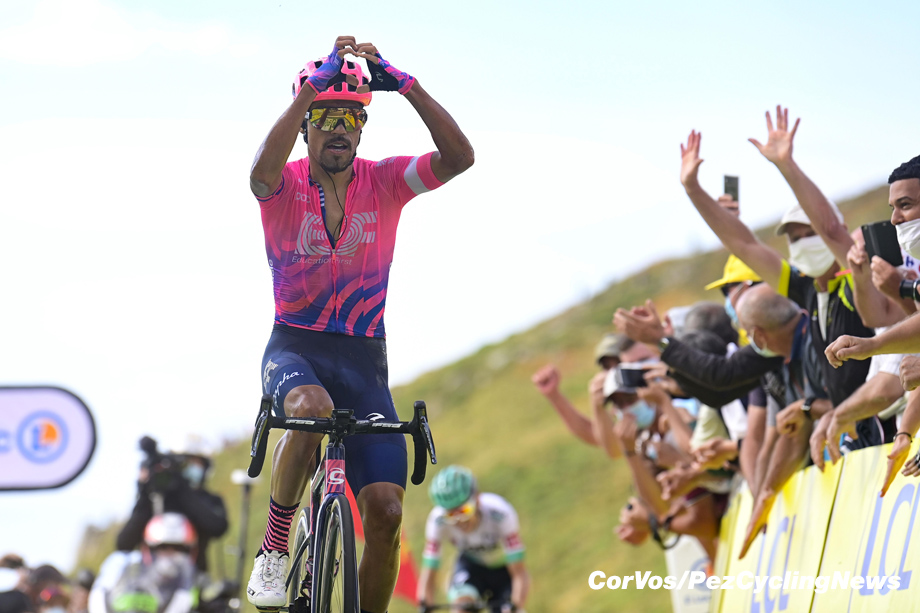 Good and bad day for the Colombians 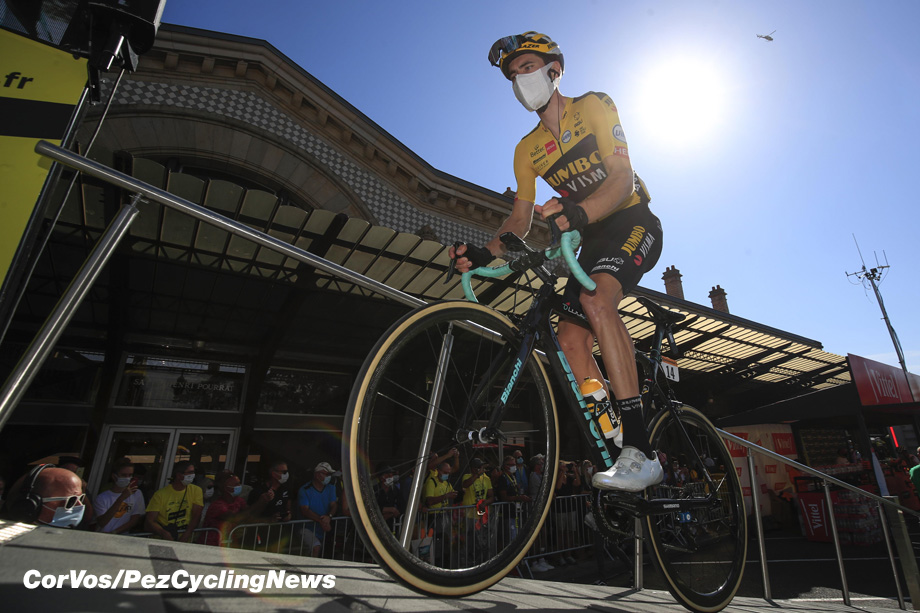 Stage 13 Route:
ASO describes the stage route: “Stage 13 starts from Châtel-Guyon, the hometown of Rémi Cavagna, the strong rouleur of Deceuninck – Quick-Step, and finishes at Puy Mary, a volcanic climb in the Massif Central. It’s the territory of Romain Bardet who gave his name to a bike path RBX (Romain Bardet Experience) very appreciated by fun riders. There’s a total elevation gain of 4400 metres in that stage, it’s the biggest of all 21 stages this year! It means the favourites could use the terrain to fire up the race. But attackers like Julian Alaphilippe who have evidenced their ambitions yesterday will try to make the most of the hardest stage in the Massif Central. Auvergne is also the historical region Alaphilippe hails from, even though he’s from a less mountainous part than this one. Defending champion Egan Bernal believes the finish atop the Puy Mary is suitable for differences between the favourites of the 107th Tour de France.” 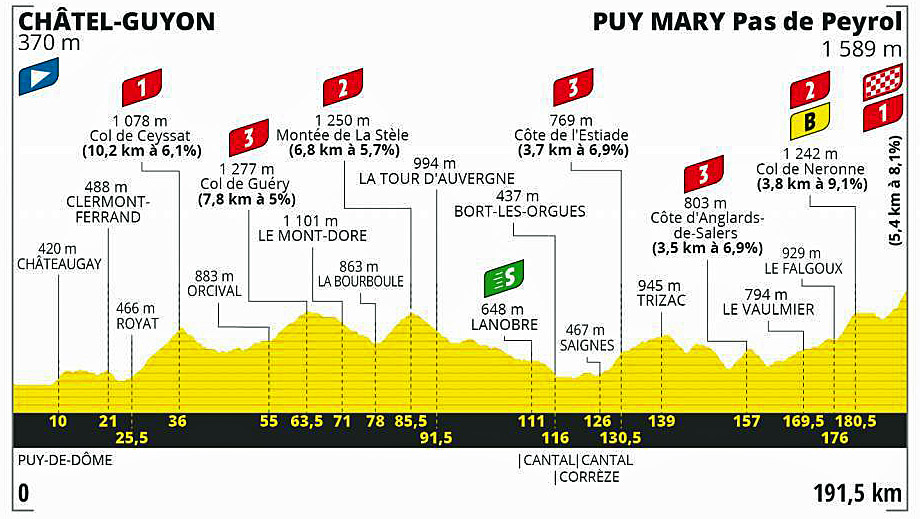 With seven climbs on the menu, the attackers knew that there would be opportunities, the attacks came thick and fast from the start and on the first climb, the Cat 1 Col de Ceyssat. After the climb: Julian Alaphilippe and Rémi Cavagna from Deceuninck – Quick-Step were the engine of an early breakaway of five. 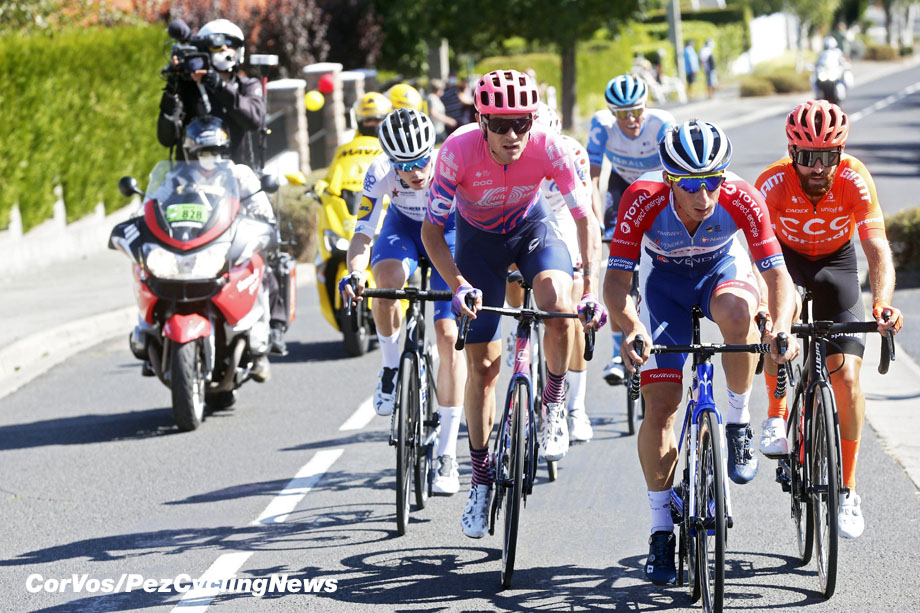 The break tried to form early 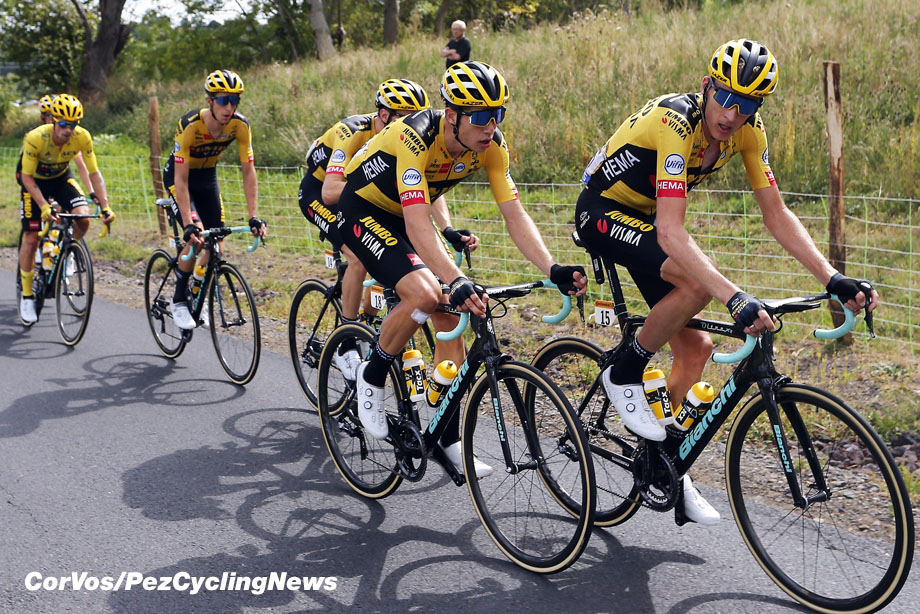 Jumbo-Visma were not keen on the early break, but eventually let it go

The cooperation was not great at the front. There were some attacks for KOM points, while some saved their strength for a possible stage victory, others to possibly help their team leader later in the stage. Egan Bernal had Sivakov, De la Cruz for Tadej Pogacar and Barguil to help Nairo Quintana. 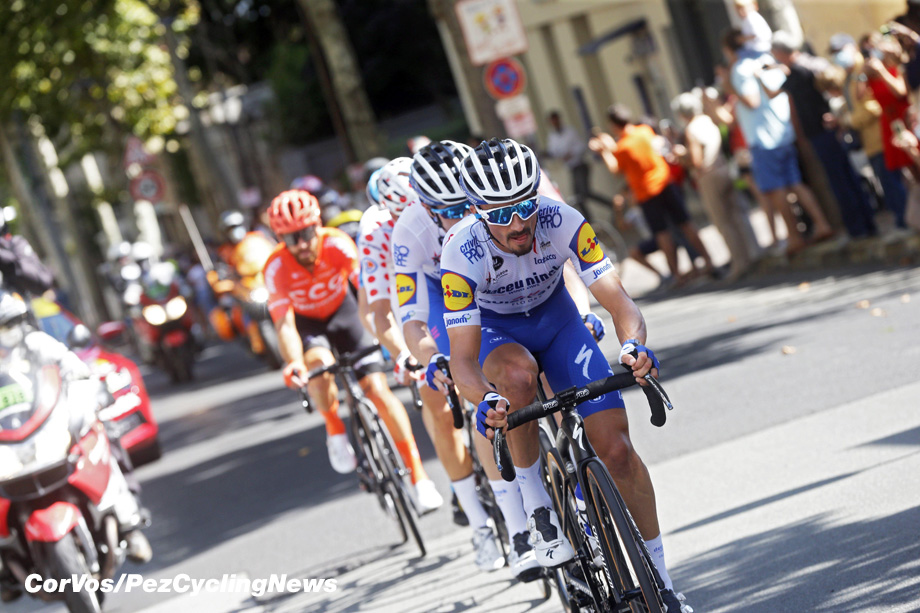 Alaphilippe was keen to get in the action… again

90 kilometres before the finish, there was a crash in the peloton. Two involved were Romain Bardet (4th overall) and Nairo Quintana (5th), but they were able to continue on their way. Bauke Mollema had to abandon and was taken to hospital. The peloton slowed down a bit, so that the gap with the leading group increased to over 11 minutes. 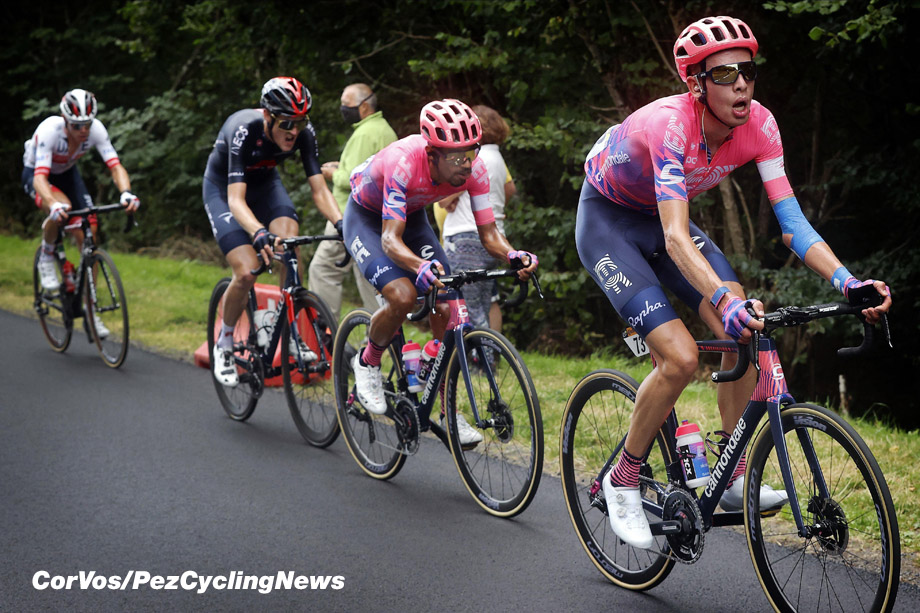 EF’s Hugh Carthy also wanted to be up front

So it was now a battle on two fronts. After a solo attack by Powless, the leading group exploded on the Côte d’Anglards-de-Salers. Schachmann joined the American and then rode Powless off his wheel on the first metres of the Col de Neronne (3.8km at 9.1%). Schachmann was more than a minute ahead of the pursuers, as Sivakov waited to help Bernal later in the stage. 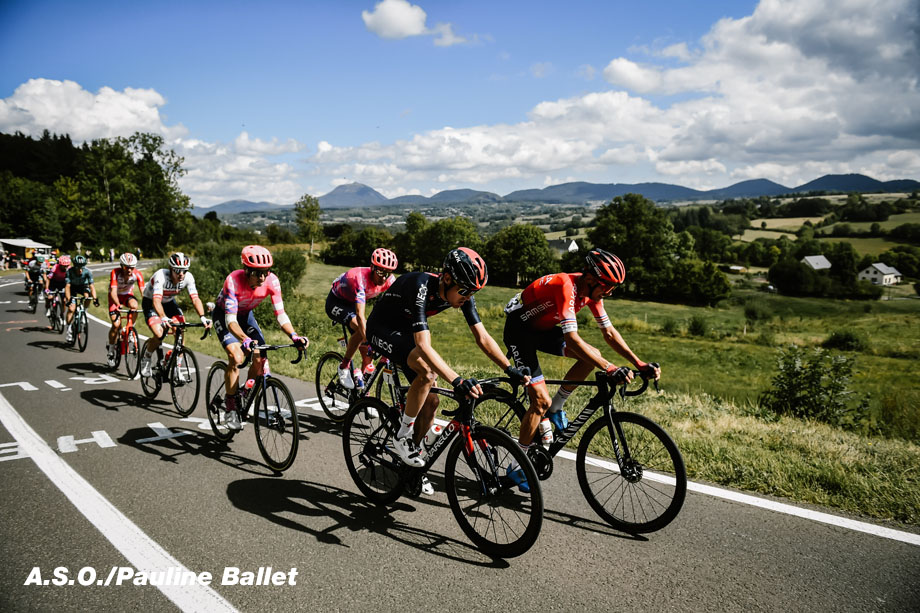 Was a rider from the big break going to take the day?

In the chase group, Martínez and Kämna were the best climbers. The Colombian had to close the gap on the steep Neronne, because Kämna had Schachmann at the front. The gap at the top of the Neronne was reduced to 27 seconds. 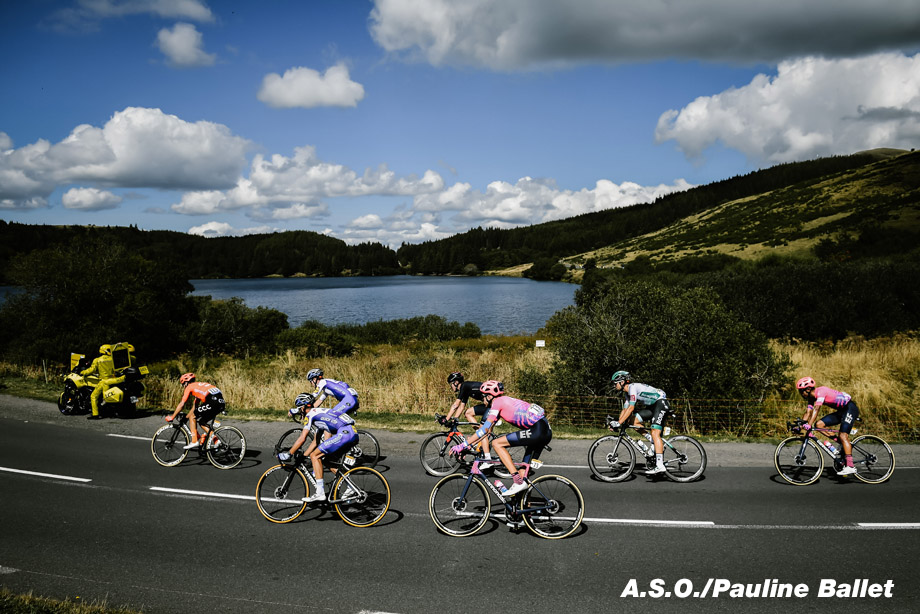 It certainly looked like the break was going to stay away

With a lead of 20 seconds, Schachmann then started the final climb of the Puy Mary (5.4km at 8.1%), but Martínez and Kämna were getting closer and closer. The EF climber had to do all the chase work. At 1.6 kilometres from the top, Schachmann was caught. Martínez was able to answer an acceleration from Kämna, this allowed Schachmann to return. 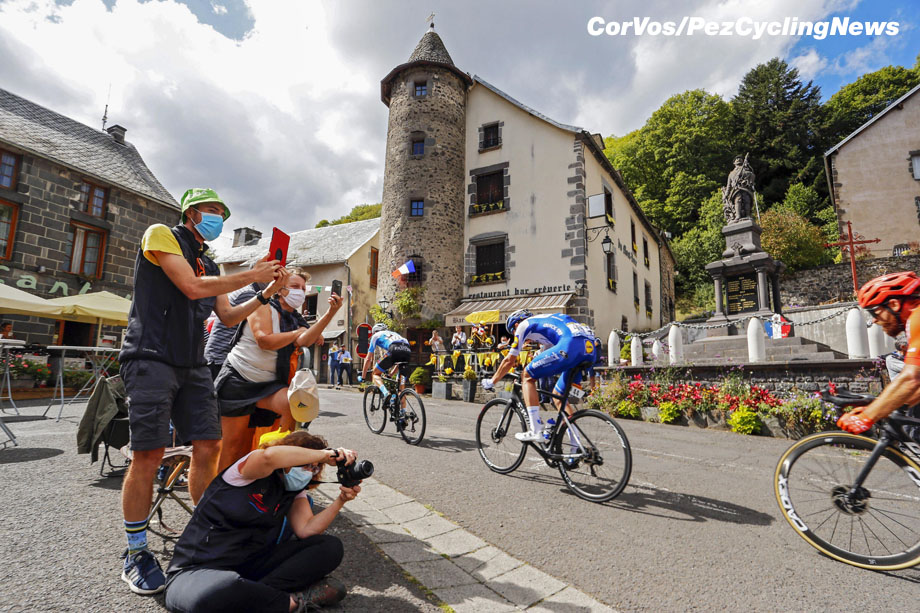 A day of two races – The break and the GC men

The victory would be decided on the very steep last kilometre. Martínez was forced into the lead by the two Germans, but Schachmann couldn’t hang on. Kämna jumped 600 metres from the line, but again he could not get rid of Martínez. The Colombian was then the fastest in the sprint. 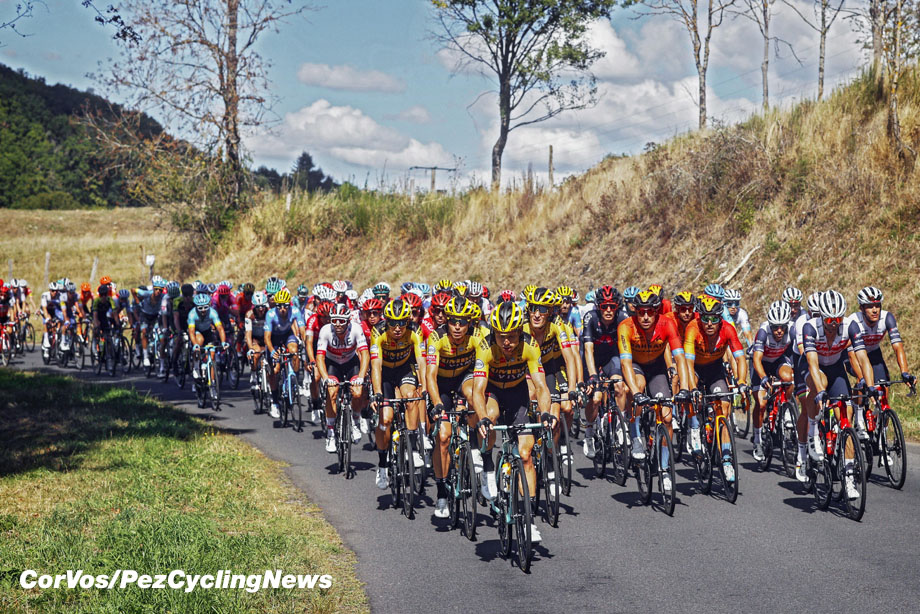 The peloton had their own battle

In the peloton, INEOS Grenadiers took over on the Côte d’Anglards-de-Salers, about 40 kilometres from the finish. The British team set a higher pace than that of Jumbo-Visma and thinned the peloton considerably to 15 riders. 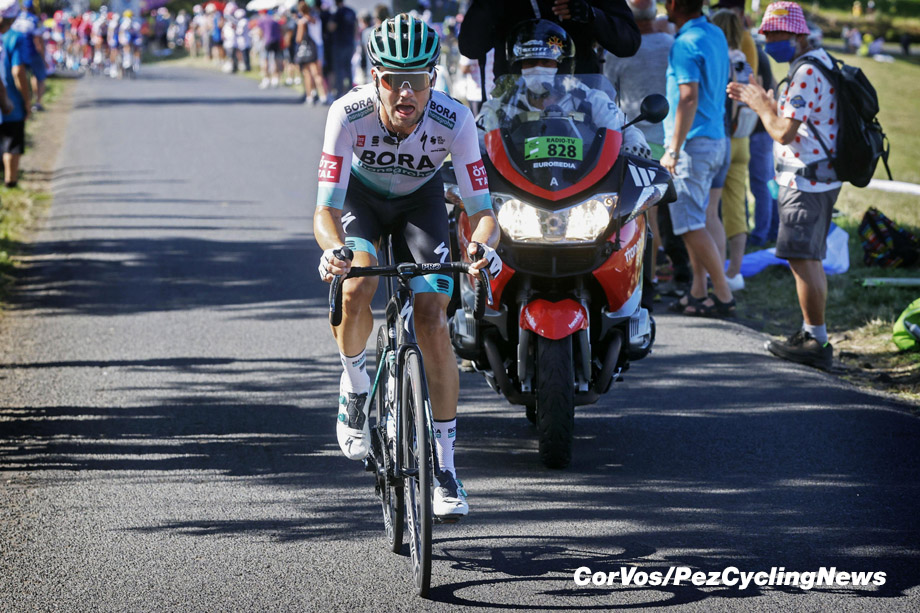 Guillaume Martin and Romain Bardet was dropped from the GC group on the steep slopes of the Neronne, due to the hellish pace from INEOS Grenadiers. Richard Carapaz then opened the attack, sending Tom Dumoulin and Sepp Kuss (the last two men for Roglič) into action. They brought the Ecuadorian back and then set their own pace. 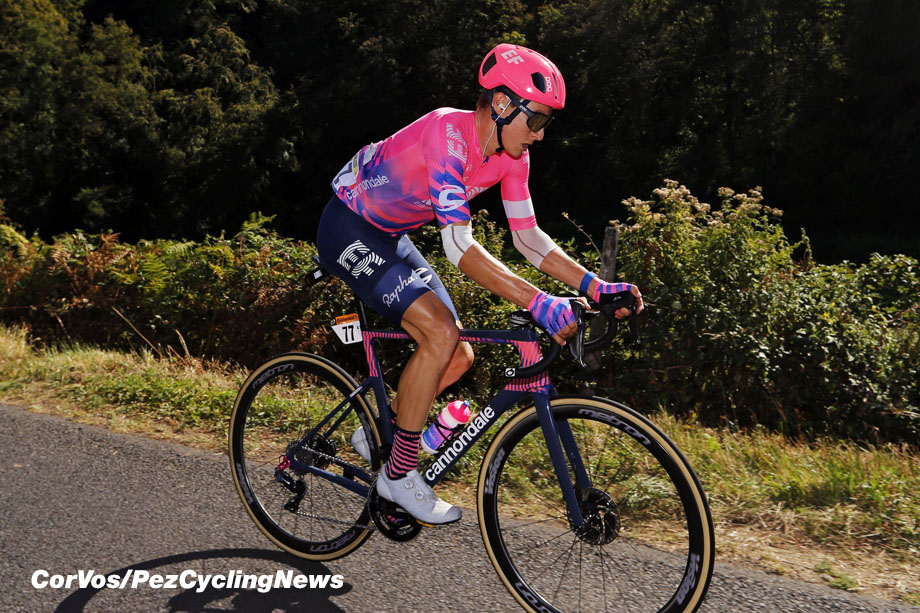 Martinez was on the hunt for the win

Dumoulin and Kuss kept the pace high on the plateau to the foot of the Puy Mary. Pogačar then put in his move on the final climb, putting Egan Bernal, Rigoberto Urán and Nairo Quintana into trouble. Pogačar and Roglič got together as the best GC riders, although Porte, López and Landa were not far behind. Bernal was losing time. 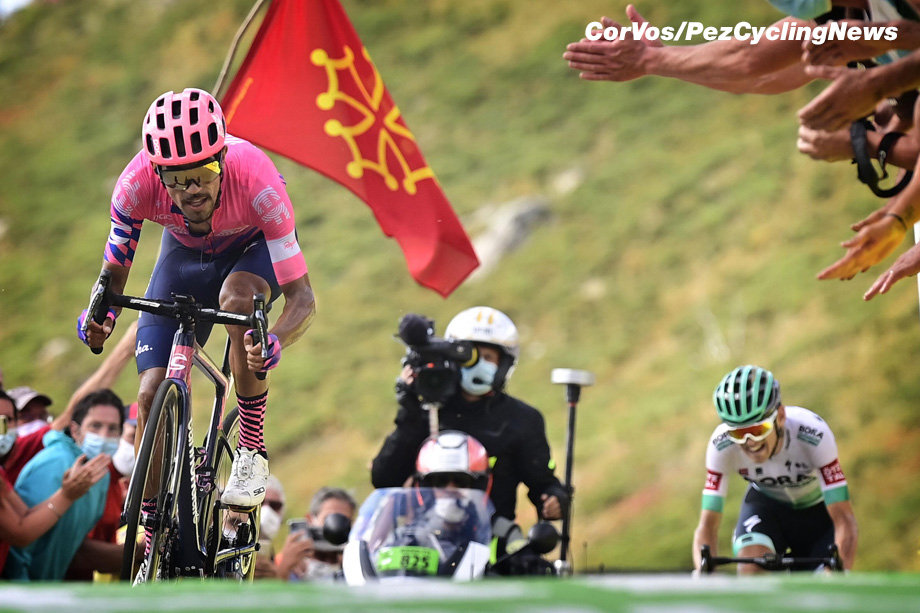 BORA-hansgrohe had the numbers, but Martinez had the legs

The Slovenian tandem rode hard in the last, steep kilometre to Puy Mary. Roglič crossed the line as the best of the top riders and strengthened his yellow jersey, with Pogačar in the same time. Bernal lost 37 seconds to the two Slovenians on the line. 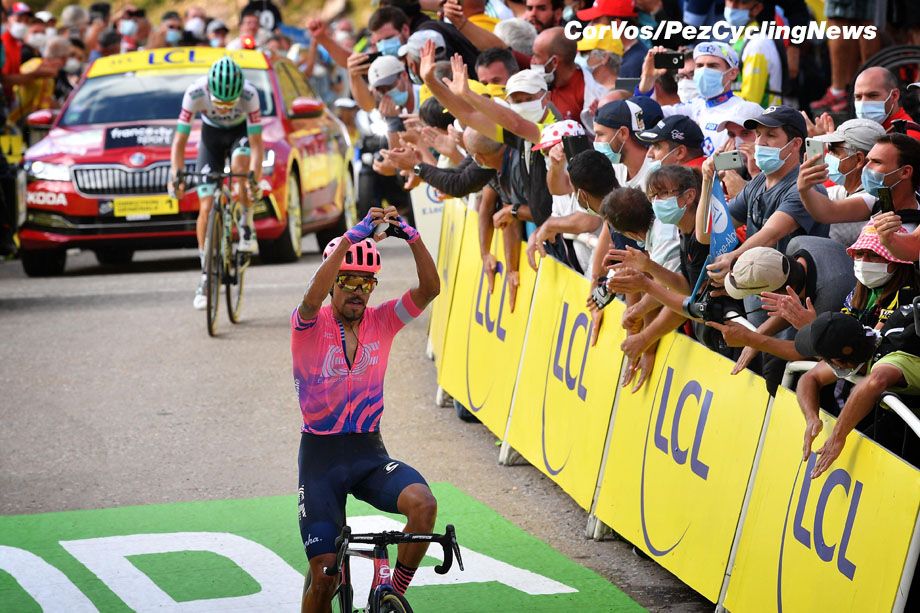 Martinez was too good for Kämna in the end

Stage winner, Daniel Martínez (EF Pro Cycling): “I’m very happy. The truth is this victory is very special for me. It’s something very good to come back to France and win [after the Critérium du Dauphiné]. I dedicate this stage to my son who will turn two in a few days. It’s been a really difficult beginning of the Tour for me. After the crash, I was a bit bitter. But mentally, I was well. I knew I was able to win a stage because physically, I felt good. I’m happy that I won today. With 5km missing, when we reached the last climb, I told myself: “Normally Schachmann goes faster than me in the downhill and on the flat”. I thought I’d be fighting for the second place. But I didn’t surrender and I ended up catching him. I’ve realised that Schachmann didn’t have much strength left after all the efforts he produced. I was confident to beat Kämna in the sprint and it happened like this. It’s incredible to win a Tour de France stage!” 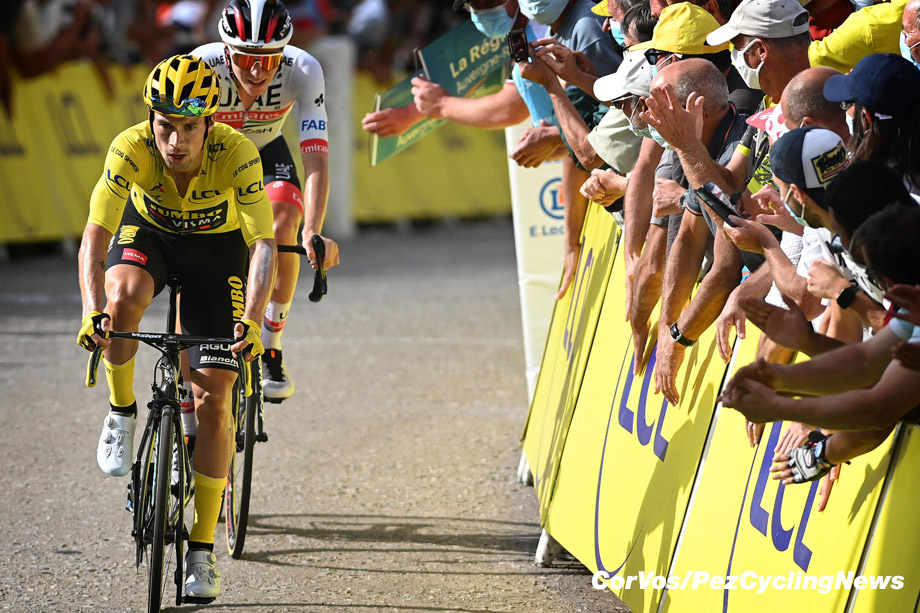 Roglič and Pogačar took time out of everyone

Overall leader, Primož Roglič (Jumbo-Visma): “I see this as a Slovenian day, not a Colombian day. It was only a 2-km climb to finish but when I saw it from the bottom I realised it would be an extremely hard effort to produce. I’m super happy with how it went. There’s still a lot of road ahead of us. Next week there’ll different scenarios with different riders. I just want to focus on myself and my team, not the other riders.”

Second overall, Tadej Pogačar (UAE Team Emirates): “Primoz and I fighting up a final steep hill, it’s like at the Machucos during La Vuelta last year. It was a tough battle. We weren’t friends in the last 2km! I gained time on everyone except Roglic. I’m very happy. The team remained calm and did a good job with David [De La Cruz] in the breakaway. For sure you’ll see more attacking next week.”