Stage Report: Another exciting Tour stage with a nail-biting climax on the Col de la Loze. Miguel Ángel López (Astana) put in the final attack on the final leg breaking ramps, the yellow jersey, Primoz Roglič (Jumbo-Visma) tried to go with him and took lengths from second placed Tadej Pogačar (UAE Team Emirates). That’s how they finished and Lopez jumped to third overall. 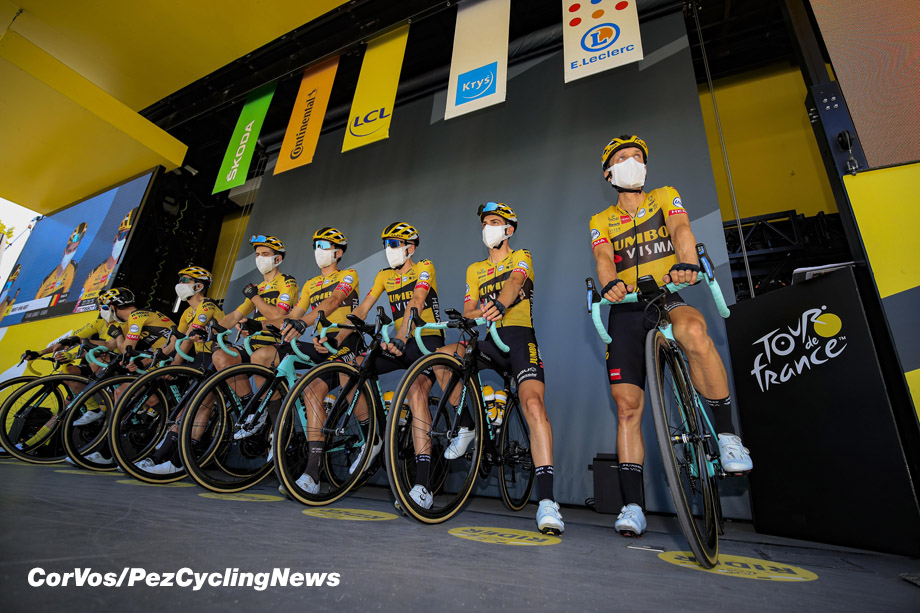 The all powerful Jumbo-Visma squad at the start

Stage 17 Route:
Tour director, Christian Prudhomme describes the stage: “Only a great champion will be able to win at the Col de la Loze! The stage profile invites the favourites of the Tour to be audacious. They don’t yet know the road that will take them on that day to the Col de la Madeleine and have no idea of what to expect once in the resort of Méribel. They’ll still have an extra 7 irregular kilometres to climb with several passages at over 20%.” 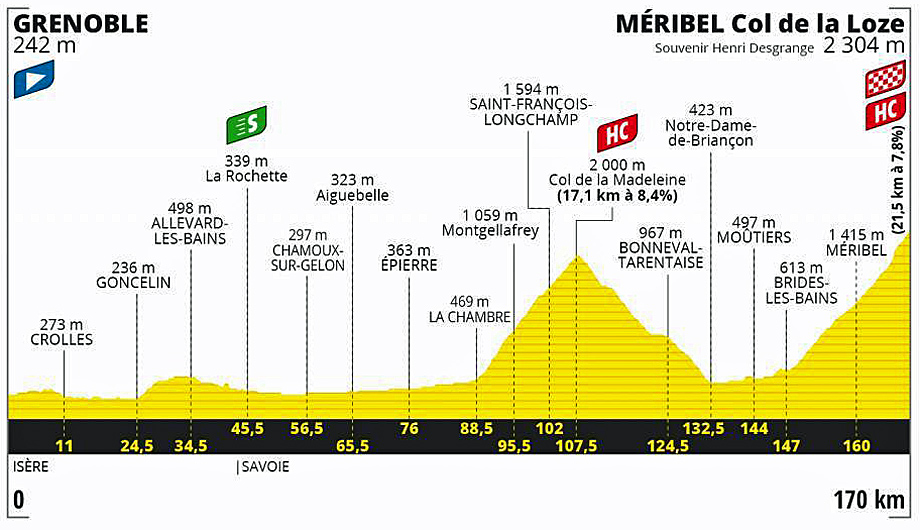 The morning news was dominated by Egan Bernal, who would not start in Grenoble. In the past few days, the defending champion had been minutes behind. Now he will focus on his recovery and then set other goals for the rest of the season. Stefan Küng was also not on the start line as he s looking to the World time trial championships. 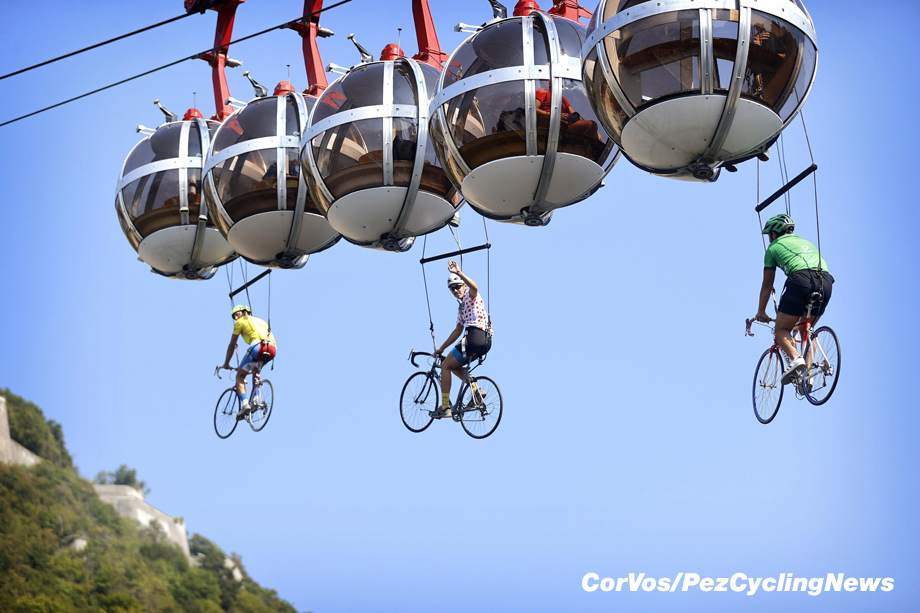 These are not the real men on the tour! 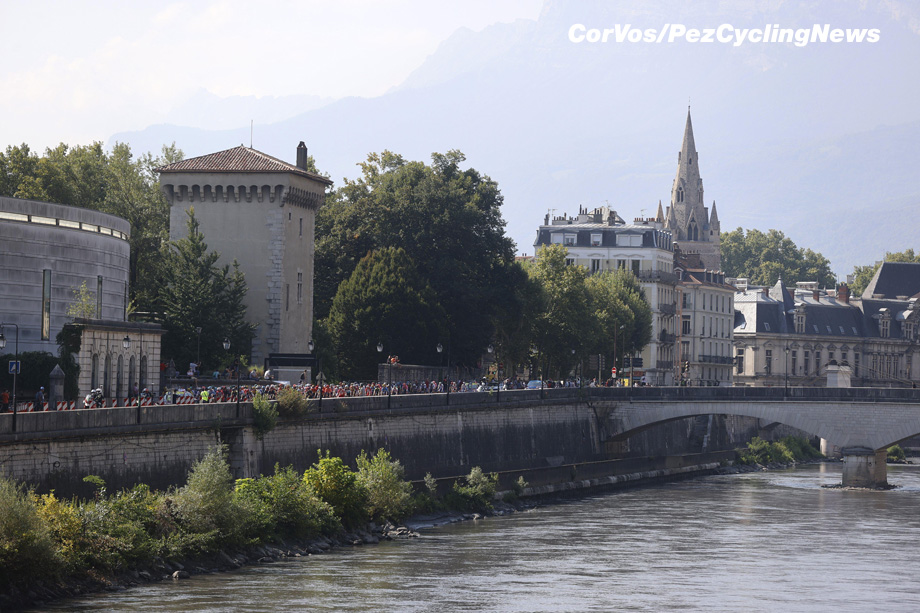 The peloton following the river out of Grenoble

After a fast start with attack attempts by Thomas De Gendt, Dylan van Baarle and Cees Bol, a leading group with five men emerged after 30 kilometres. The stage winners of Nice and Villard-de-Lans, Julian Alaphilippe and Lennard Kämna, joined forces with Richard Carapaz, Gorka Izagirre and Dan Martin, while Daryl Impey tried to cross. The five escapees had a 3 minute lead at the intermediate sprint after 45.5 kilometres. Behind in the peloton, green jersey Sam Bennett took 2 points ahead of Peter Sagan. 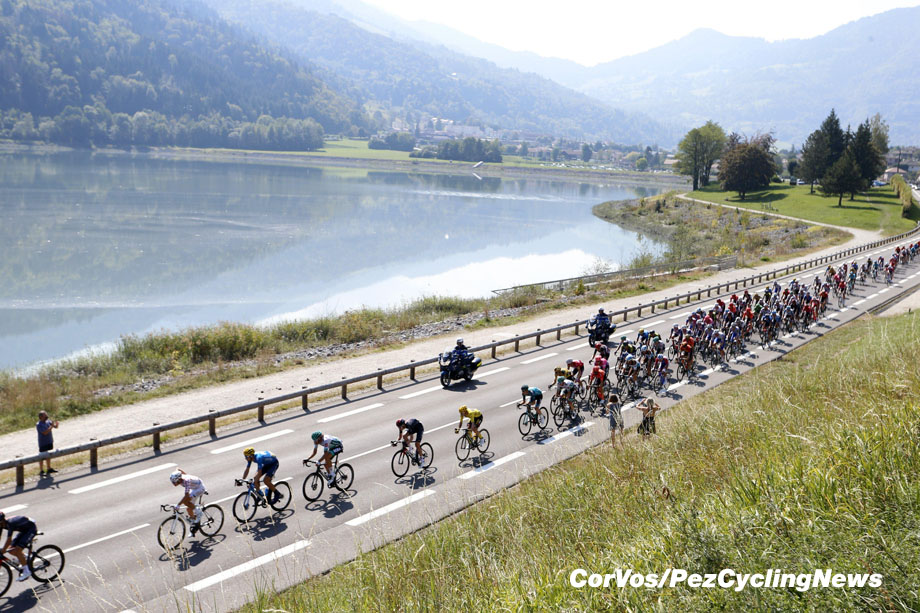 Not an easy day at the lake-side 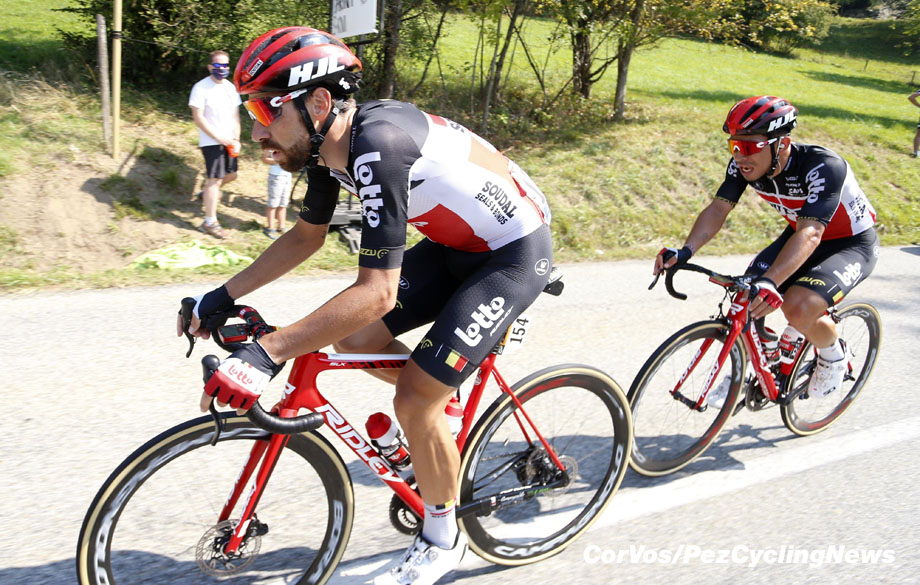 It was going to be a long, hard day for Caleb Ewan

After 90.5 kilometres, the leading group reached the town of Notre-Dame-du-Cruet, and the start of the Col de la Madeleine. In the peloton, which was more than 5 minutes behind, was too fast for Nairo Quintana. The tenth placed overall was not the only rider who had problems, Pierre Rolland, Max Schachmann, Esteban Chaves, Daniel Martínez and Thibaut Pinot were also dropped. 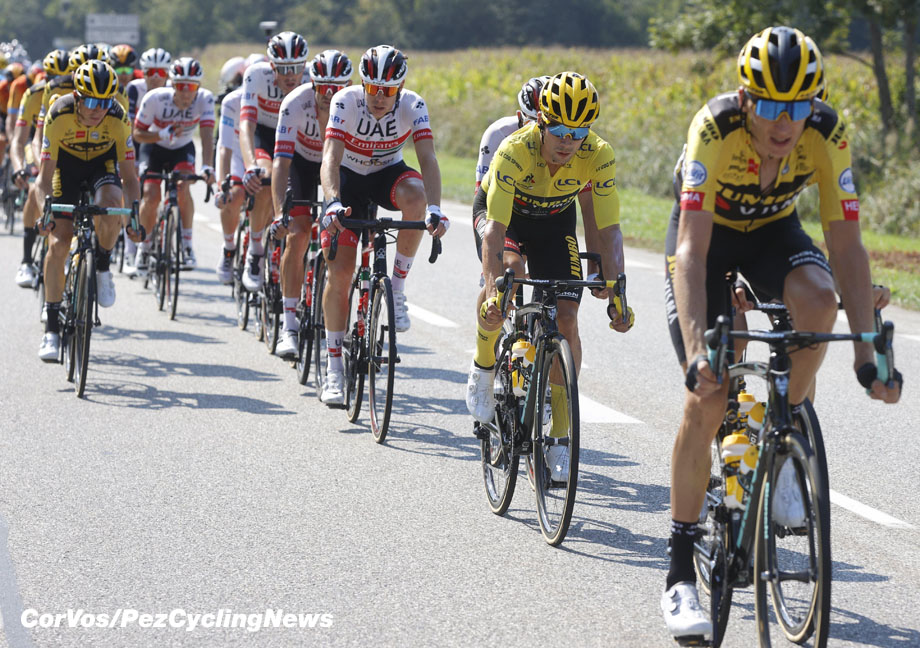 The leading group was too much for Kämna. Behind; Bahrain-McLaren set the pace, as team leader Mikel Landa, clearly wanted to move up in the rankings. Due to the fast pace of the men in orange-red, the difference with the escapees was cut. 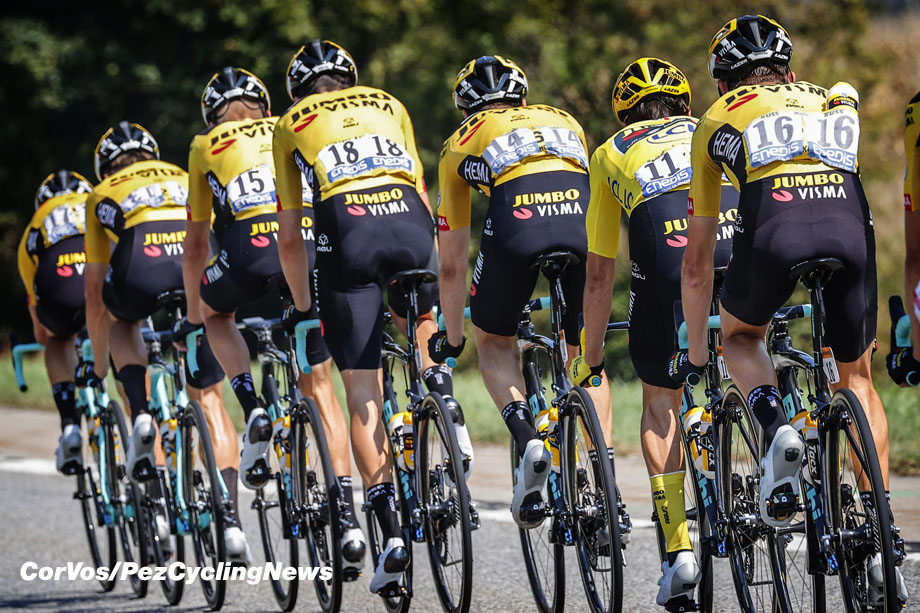 No, not a team time trial

With a lead of more than a minute, Carapaz, Alaphilippe, Martin and Izagirre reached the top of the Madeleine, followed by the long descent to the Isèredal. Tadej Pogačar was 5th on the climb and relieved Benoît Cosnefroy of the KOM classification. In the long descent, Martin couldn’t hold the leading group, while Alaphilippe, with his descending capabilities, took some distance from his companions. 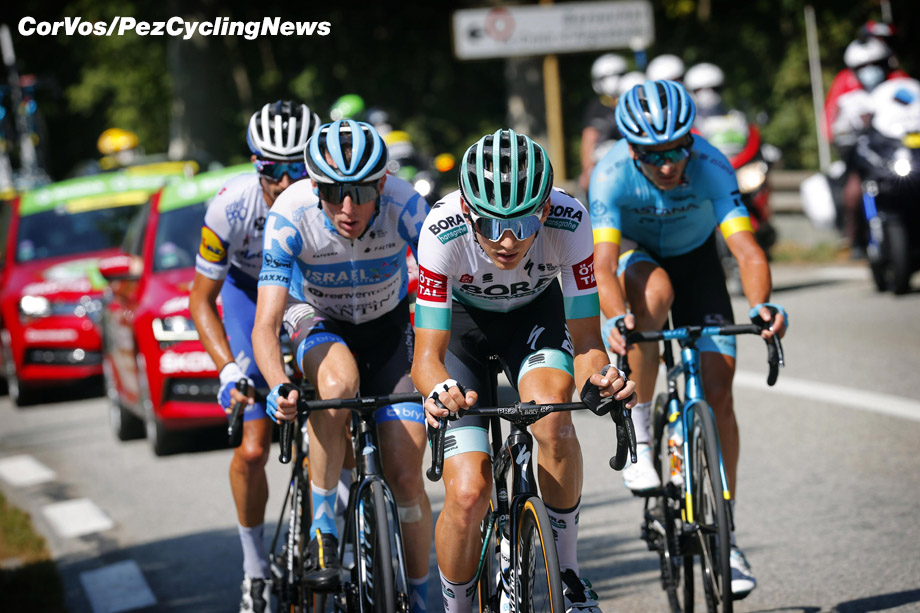 Carapaz and Izagirre joined Alaphilippe and once in the valley, the escapees had a lead of two and a half minutes. Via Aigueblanche and Moûtiers, the riders head to the mountain village of Brides-les-Bains, the start to the final climb of the seventeenth stage, the Col de la Loze. With just over two minutes ahead, the three remaining attackers started the monster climb. 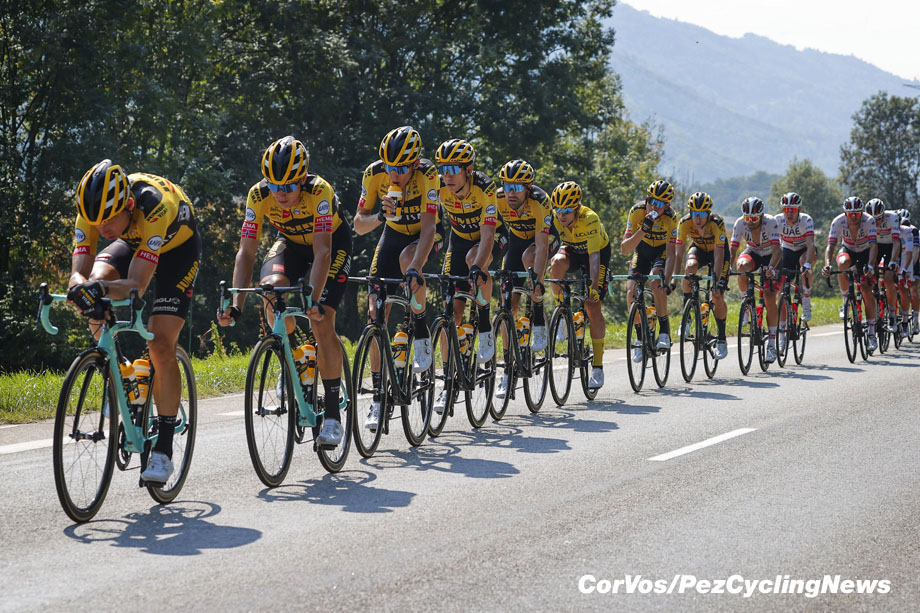 In the first kilometres, Alaphilippe again put some distance on his fellow escapees, to the annoyance of Carapaz and Izagirre. After some grumbling back and forth, the front runners worked together again and initially maintained their 2 minute lead. In the chase group, Mikel Landa’s teammates still set the pace, with Primož Roglič and his teammates on the wheels. 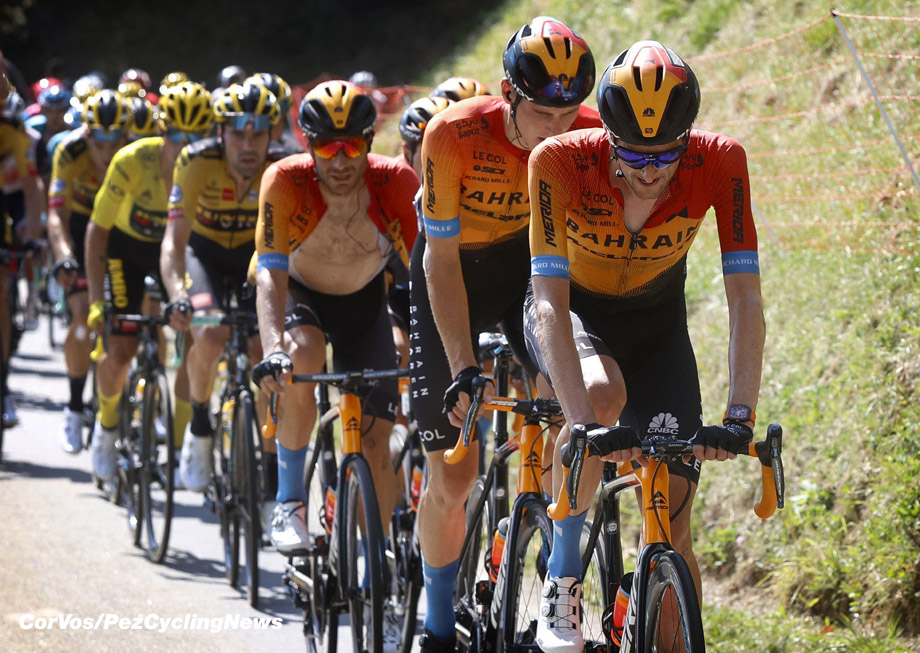 Bahrain-McLaren were up to something 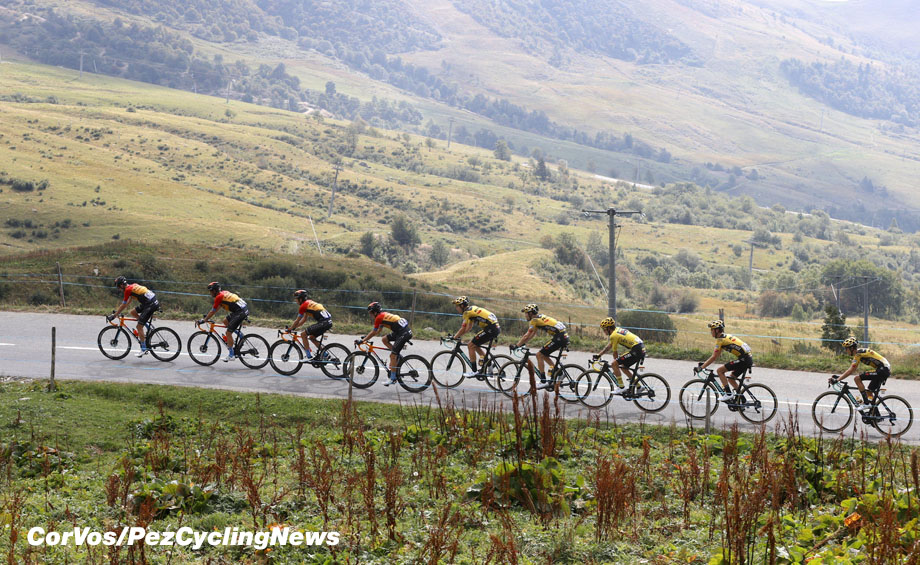 Bahrain-McLaren wanted the break back

At 13 kilometres from the finish, when the lead of the leading group had shrunk to 1 minute, Carapaz pushed harder on the pedals. Izagirre went with him, but Alaphilippe had to let go and fell back to the peloton. At 9 kilometres, Carapaz was alone as Izagirre couldn’t hold the Giro winner, but the group behind also had the Ecuadorian in their sights. Nevertheless, Carapaz managed to stretch his lead. 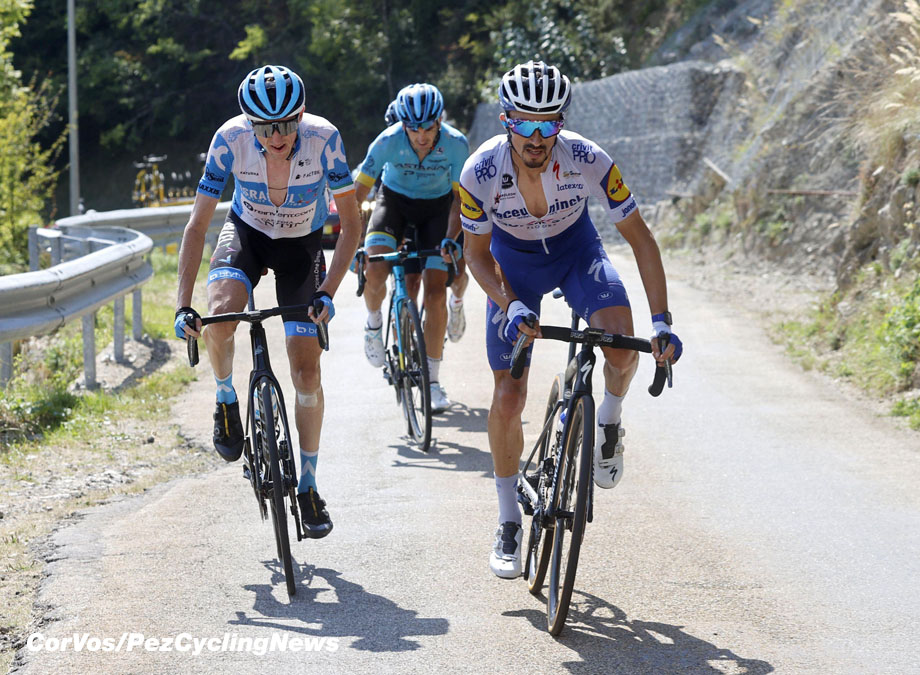 The break wasn’t allowed much advantage, Dan Martin lost out on the descent 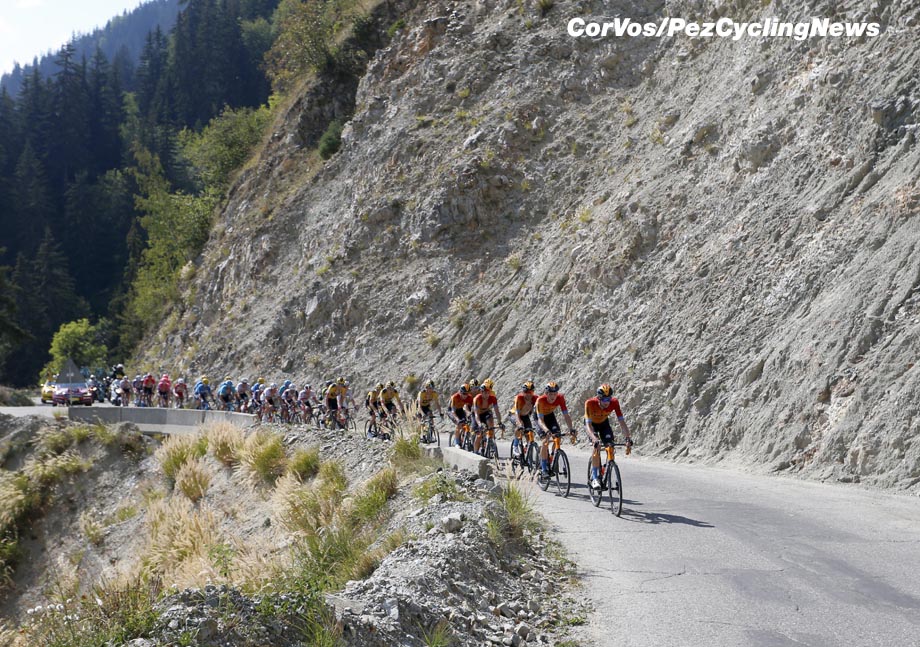 Bahrain’s Mikel Landa must have hopes for today

With a 30 second lead, Carapaz started the last 4 kilometres. Mikel Landa could not hang on, after his teammates had work so hard. In the end only Primož Roglič, his teammate Sepp Kuss, Tadej Pogačar and Miguel Ángel López remained in the group of favourites, while Richie Porte tried to hang on. Kuss closed the last gap to Carapaz at 3 kilometres. 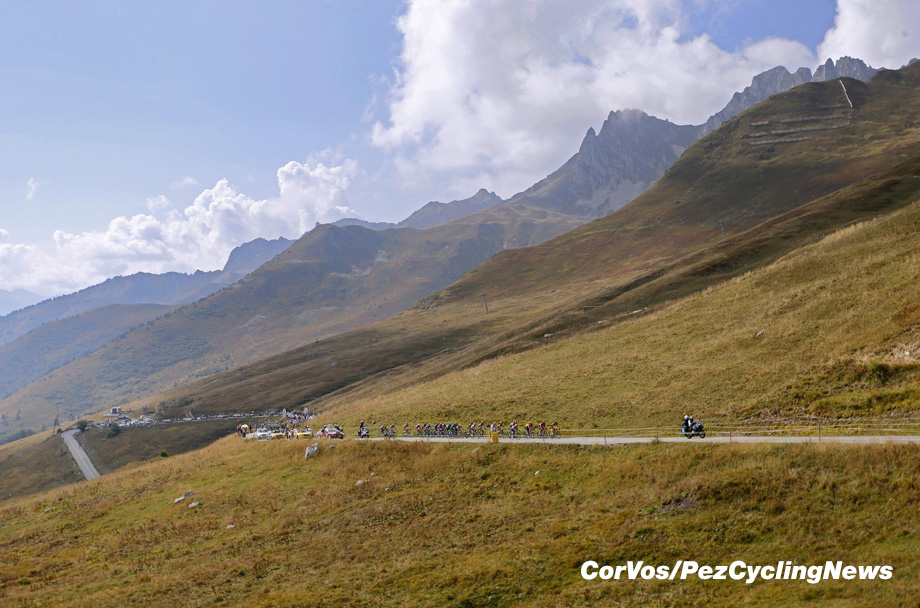 The tough, long climb of the Col de la Loze

Kuss then accelerated on the steepest part of the Col de la Loze with López, while Roglič’s yellow jersey stayed with Pogačar and Porte. Kuss looked back to his leader, allowing López to continue. The American then dropped back to Roglič, who had ridden away from his main rival, Pogačar. Roglič then went in search of the strong López. 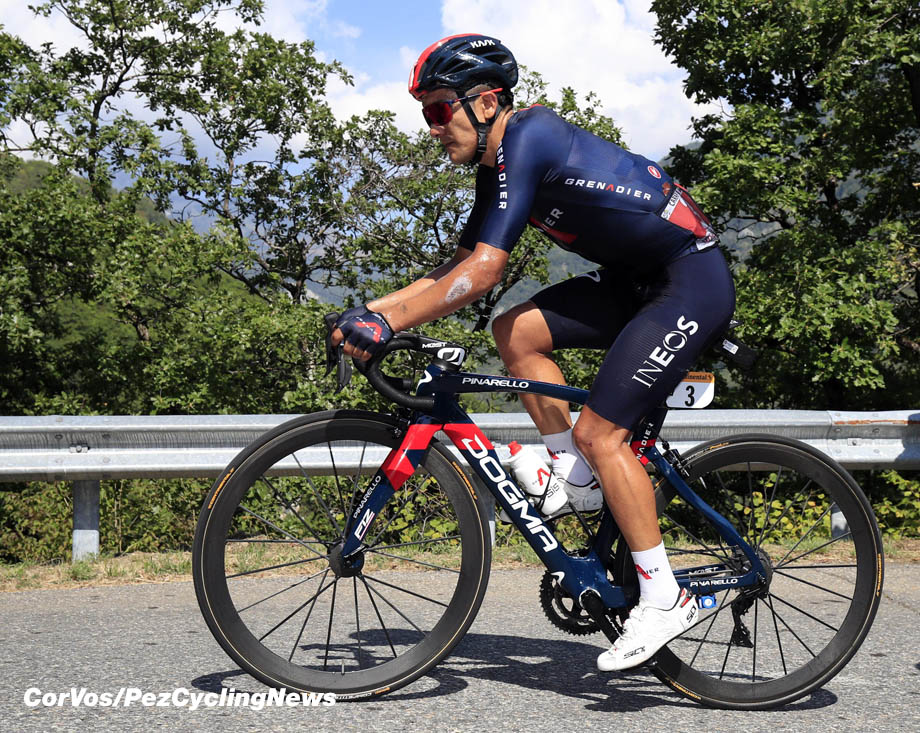 Carapaz was left on his own 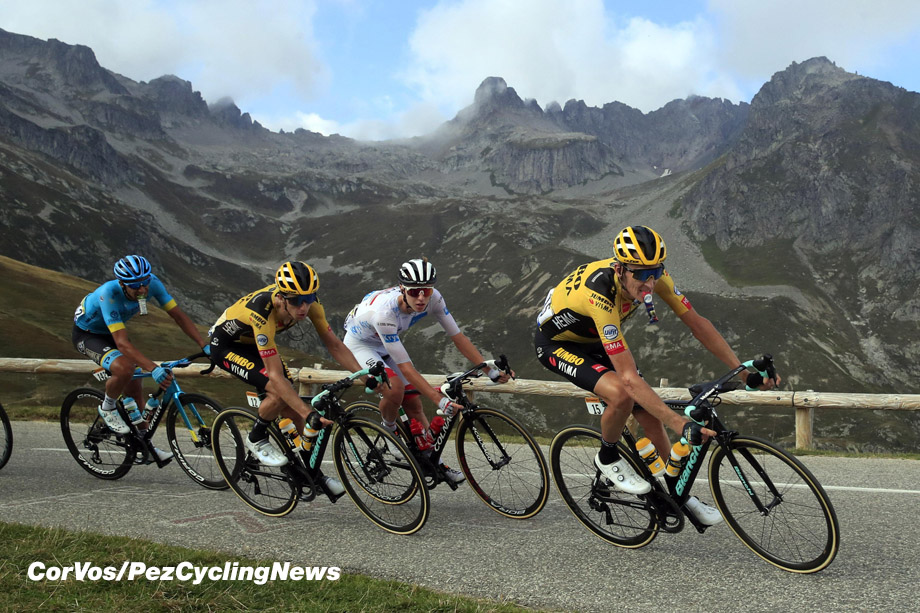 The top men were coming back

López managed to hold off Roglič and took the stage victory on the birthday of his Astana team manager, Alexander Vinokourov. The Colombian also moved up to third place on the overall. Pogačar was unable to catch Roglič in the final section to the line and lost 15 seconds to the yellow jersey. Thanks to the bonuses, Roglič took an extra 2 seconds. 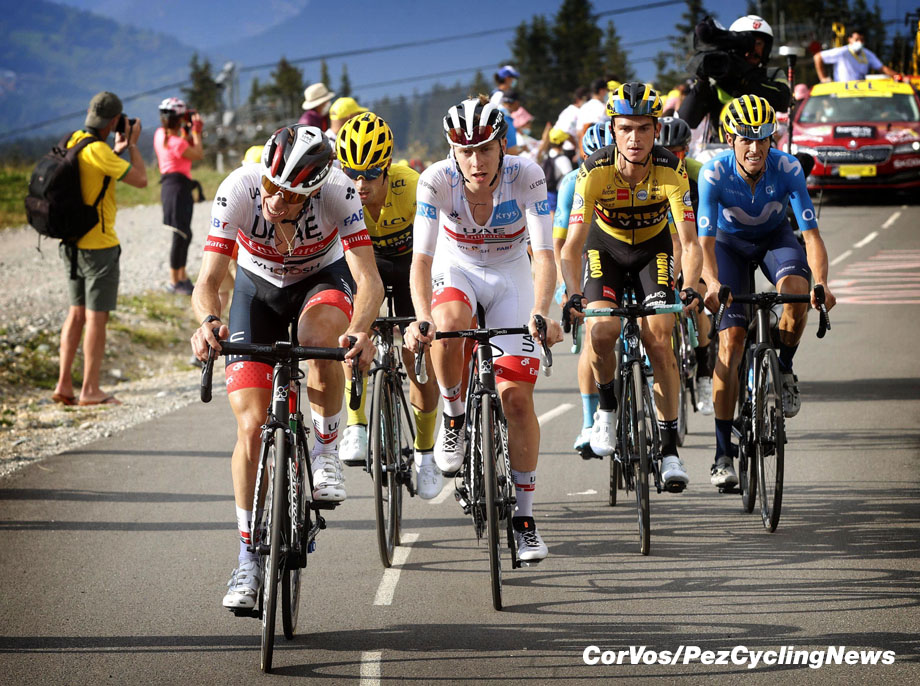 The stage was about to explode

Stage winner and 3rd overall, Miguel Ángel López (Astana): “I’m very happy. I feel emotional because of the work done at home with my family, my wife, my son… I dedicate this victory to them. It hasn’t been easy to arrive where I am now. We were confident. I was on my terrain. At 2000 metres of altitude, I feel like at home. I took some advantage when I had to. It’s wonderful. The team did an excellent job from start to finish. Omar [Fraile] accompanied me, then it was a bit difficult for him but we’ve dreamt big and we never lost faith before fighting day after day. This stage win is the best way to celebrate the birthday of our boss Alexandre Vinokourov. I came to my first Tour with the primary goal to reach Paris. I’ll keep taking it day by day until the end.” 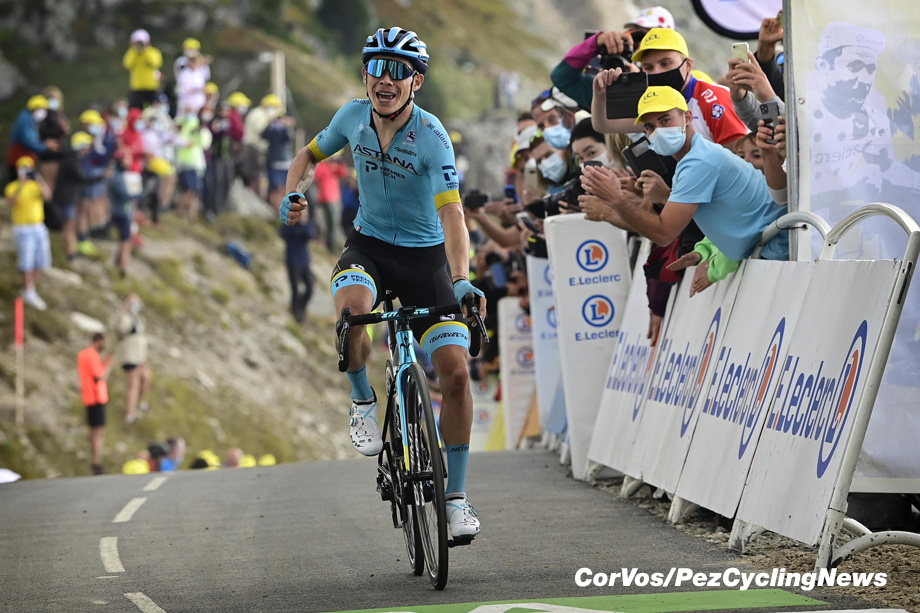 The win for Superman 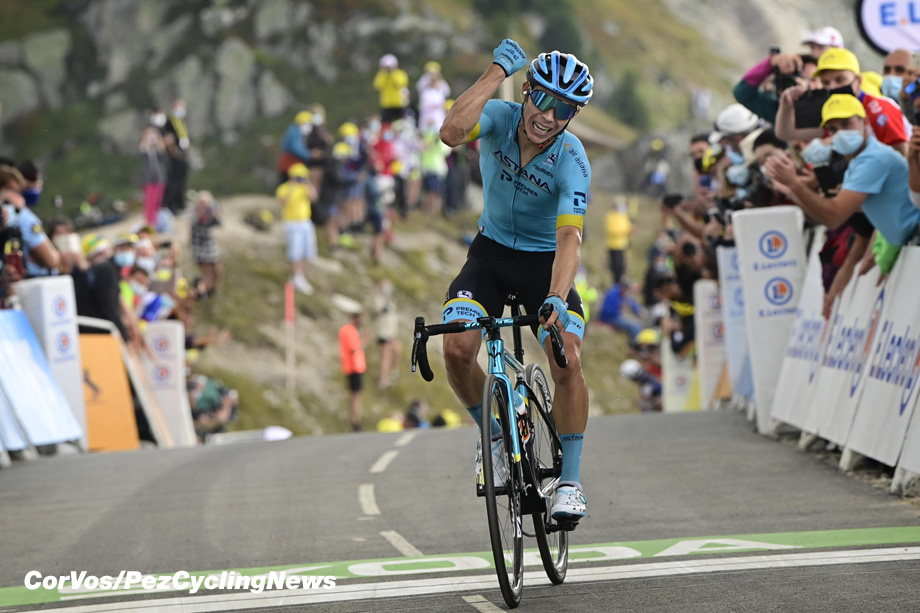 And now third place for the Colombian

Overall leader, Primož Roglič (Jumbo-Visma): “It was a good day for us, again in yellow. The start of the stage was very fast and we had to keep our focus on [so the race didn’t get out of control]. There are some big days to come. The team is doing a really good job so far, so we are ready and looking forward to the final days of the Tour de France. Tomorrow is this year’s queen stage. The final climb is the highest point of the route, and its last kilometres are very hard ones, as we have to ride a steep bike path. We’ve reckoned the climb – and I’ve also gone to the other side, the ski jumping hills in Courchevel. With 15 days on the legs, the terrain doesn’t matter that much. Flat, uphill – it’s the same. It’s about having the legs, and I hope to have them and do well tomorrow.” 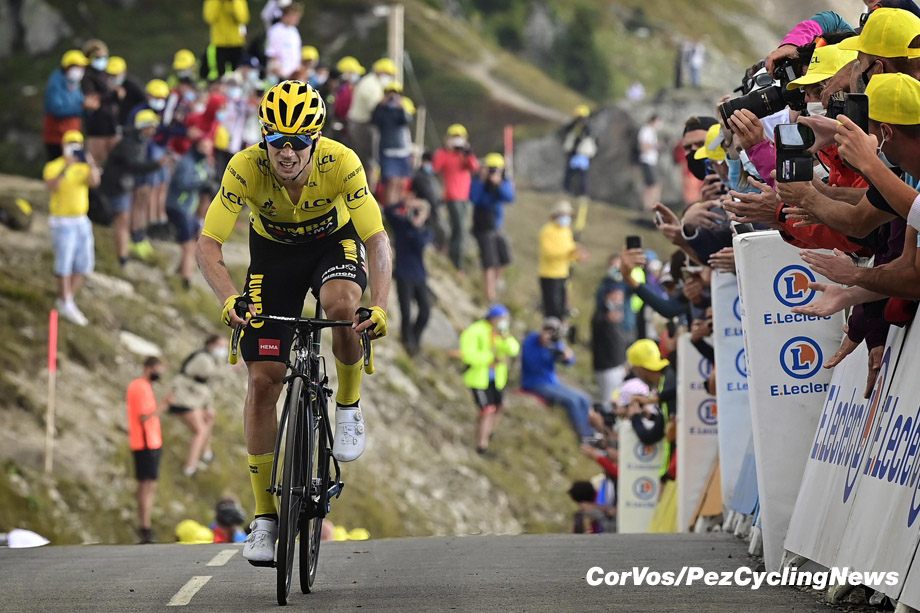 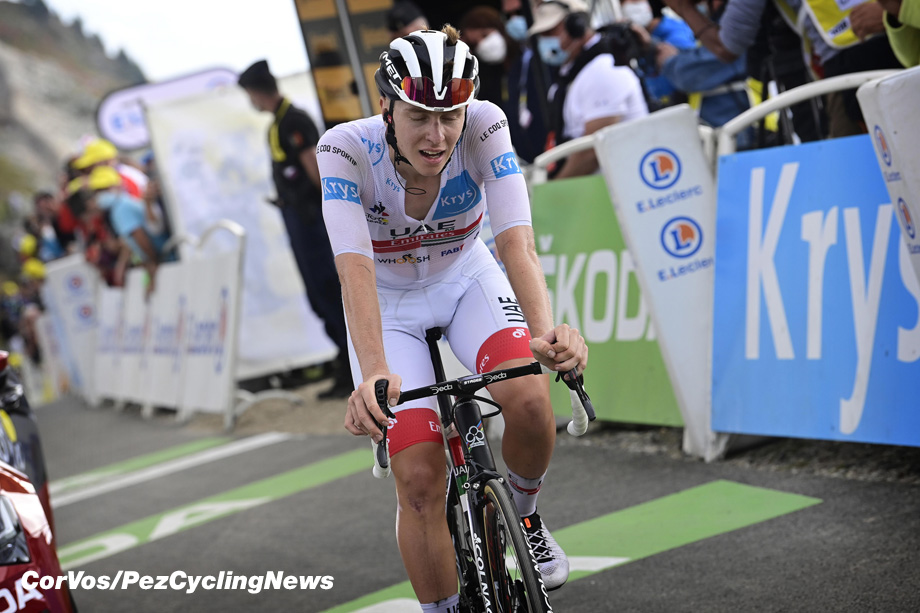 # Keep it PEZ for the final roads to Paris. #

Train Your Feet For More Power From the Ground Up