Kwiatkowski and Carapaz - One-two at the finish

Stage Report: Stage 18 was billed as the hardest day of the 2020 Tour de France and it was the INEOS-Grenadiers team who took the mountains by the scruff of the neck and gave them a good shake. Richard Carapaz and Michal Kwiatkowski made the break and then two-man team time trialed to the finish together. Behind there were some splits and the top ten had some changes, but Primoz Roglič (Jumbo-Visma), Tadej Pogačar (UAE Team Emirates) and Miguel Ángel López (Astana) kept their podium places. 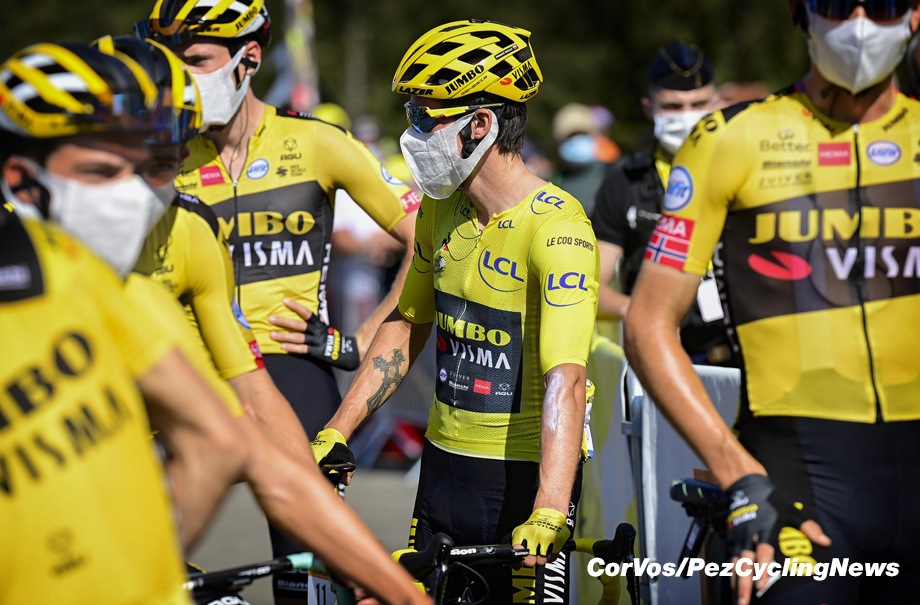 Another day of hard work for the Jumbo-Visma team

Stage 18 Route:
Tour director, Christian Prudhomme describes the stage: “The course of the day is made for the most enduring climbers. Indeed over 4,000m of climbing will be on the menu. In the following order, the peloton will head up to the Cormet de Roselend, then the Col des Saisies followed by Les Aravis and finally the Plateau des Glières, a key location of the French Resistance, before continuing towards La Roche-sur-Foron.” 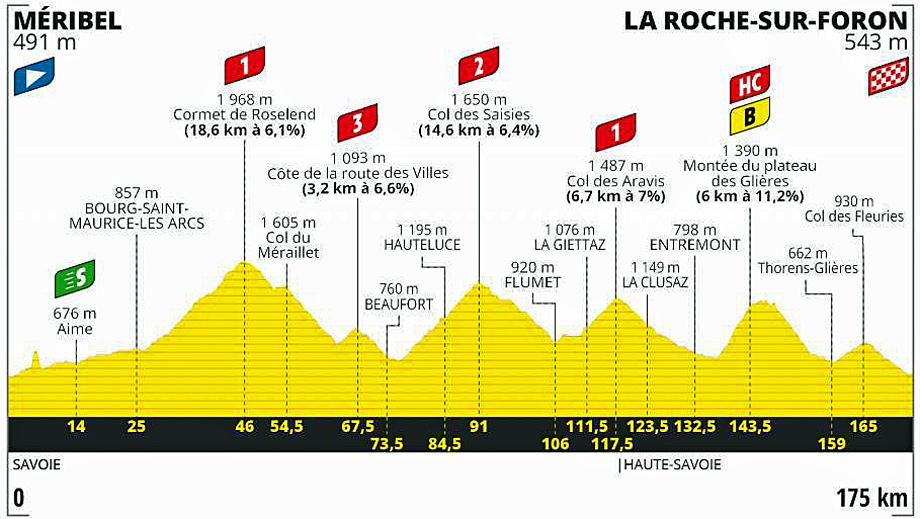 There were many attacks from the gun, but it didn’t take long before a group of 32 riders managed to get some distance from the peloton. This large group seemed to be allowed to escape by the peloton. Maximilian Schachmann and Lennard Kämna tried in vain cross for the BORA-hansgrohe team. At the front INEOS Grenadiers, Movistar and Sunweb were well to the fore. The British team had Richard Carapaz, Michal Kwiatkowski, Dylan van Baarle and Jonathan Castroviejo in the break. Dario Cataldo, Nelson Oliviera, José Rojas and Carlos Verona were there for Movistar, while Sunweb had Nikias Arndt, Hirschi, Andersen and Nicolas Roche. 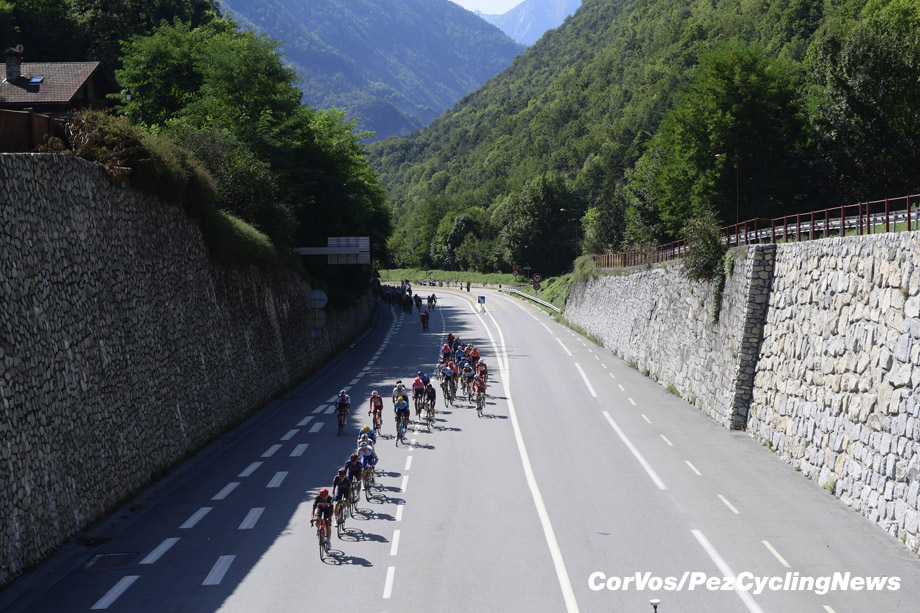 Other interesting names in the early break were Nans Peters, the stage winner of Loudenvielle, Pello Bilbao, Bob Jungels, Tejay van Garderen, Jesús Herrada and three riders who are still involved in the battle for the green points jersey. Sam Bennett, Peter Sagan and Matteo Trentin wanted the points from the only intermediate sprint in the town of Aime. Bennett managed to win the sprint. 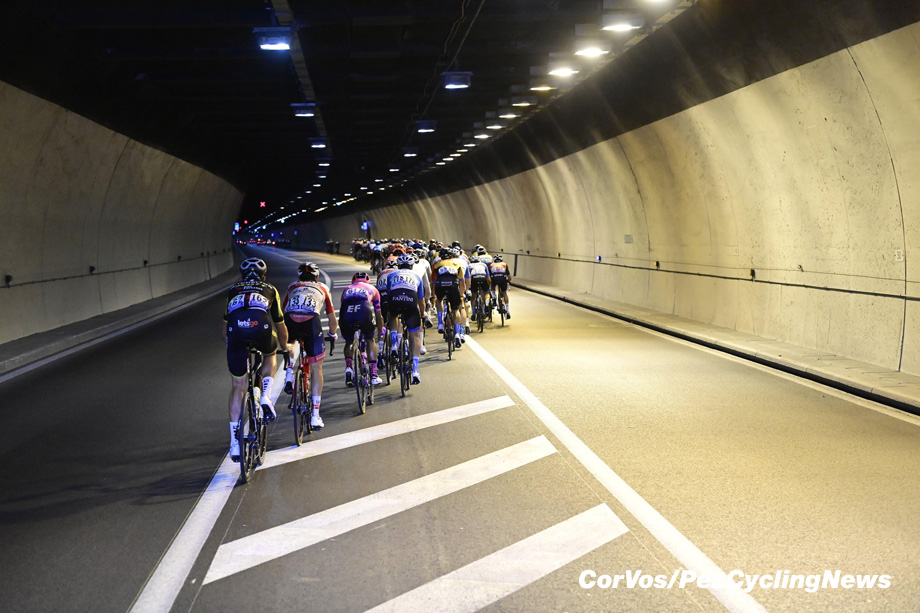 A tunnel through the mountains

The important was done for the day, and so the Irish champion was one of the first riders to be dropped from the leading group on the Cormet de Roselend (18.6km at 6.1%). The best climbers emerged from the peloton: Pierre Rolland, Julian Alaphilippe, Warren Barguil and Damiano Caruso, among others. They wanted to make the jump forward, which was not impossible as the difference with the escape continued to fluctuate around 1:30. In the group of favourites the sprinters, like Alexander Kristoff, Caleb Ewan and also Sam Bennett, who had now been caught by the peloton, were all getting together for the fighting against the time limit. 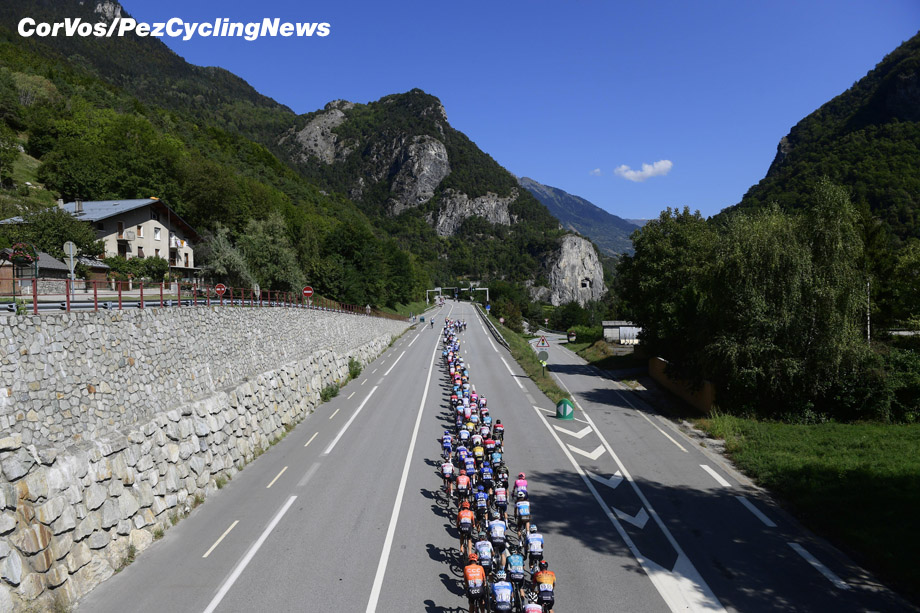 The peloton on the chase

André Greipel was dropped a little earlier and decided to get into the broom wagon. Castroviejo sacrificed himself in the first group for his teammates Carapaz and Kwiatkowski and the Spanish all-rounder ensured that the leading group was considerably thinned with his high pace. At 1:30 from the front riders, the thinned favourites group was driven by Jumbo-Visma, with Robert Gesink as the man who had to do the work. 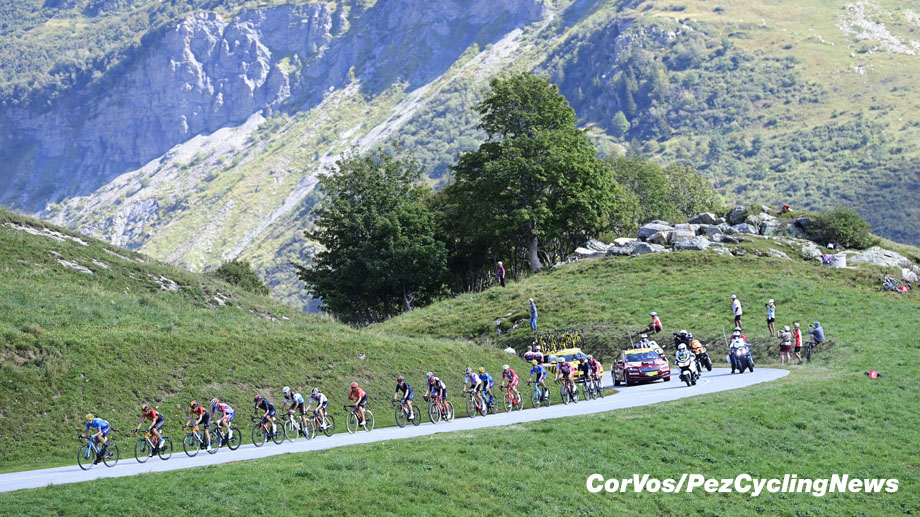 No flat roads on stage 18

The yellow shirts of Jumbo-Visma let the lead of the seventeen remaining leaders go to 2 minutes. Roglič and his teammates also did not have to worry about the best classified rider in the leading group. The most dangerous rider at the front was Caruso, who started the stage more than 12 minutes behind Roglič. Just before the top, the riders with ambitions for the mountains classification emerged. At the top of the Cormet de Roselend Hirschi, was first after a solid sprint against Richard Carapaz, good for 10 mountain points. 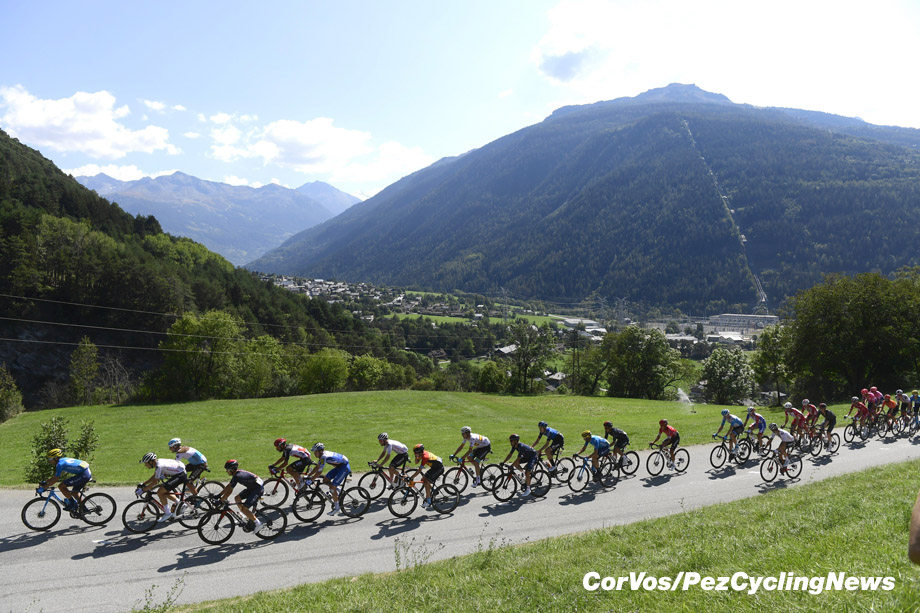 Hirschi decided to keep going down the Cormet de Roselend, pressuring Carapaz, but the Giro winner managed to hold his wheel and the two riders decided not to wait for the others. Kwiatkowski, Edet and Bilbao had to pull out all the stops to catch them. The stage went up and down all day and so after the descent of the Cormet de Roselend the riders immediately started the next climb, the Côte de la route des Villes, Cat. 3. Carapaz, Kwiatkowski, Edet, Bilbao and Hirschi worked well together towards La Roche-sur-Foron. The others were distanced and the Roglič/Pogačar group now followed at 4 minutes. 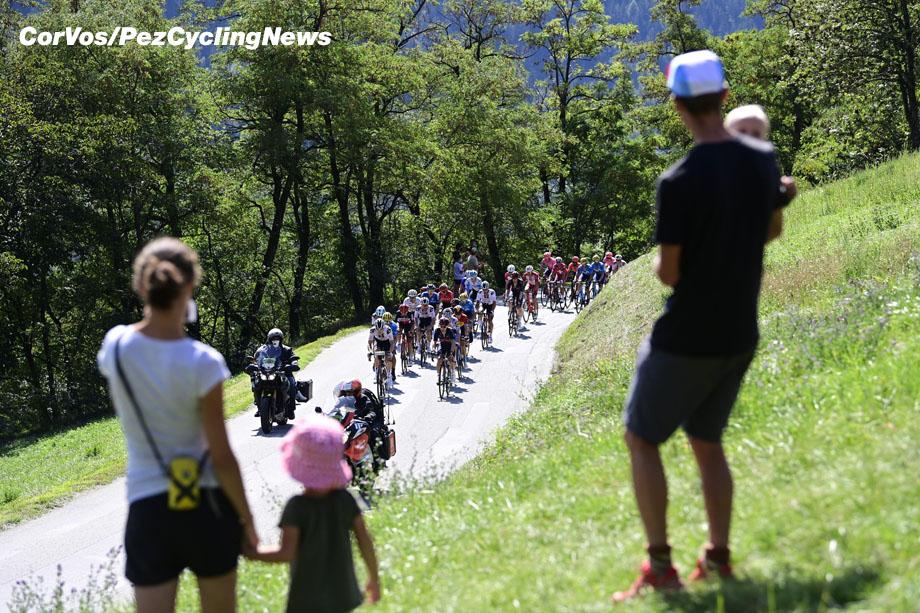 A family day out

On the third ascent of the day, the Col des Saises, the order was respected and Hirschi emerged first again, ahead of Carapaz and Bilbao. The Swiss clearly had the most explosiveness, to the frustration of Carapaz, who still had the ambition to take over the mountain jersey from Pogačar. Kwiatkowski saw the danger and so the Pole decided to put pressure on Hirschi in the descent of the Saises. 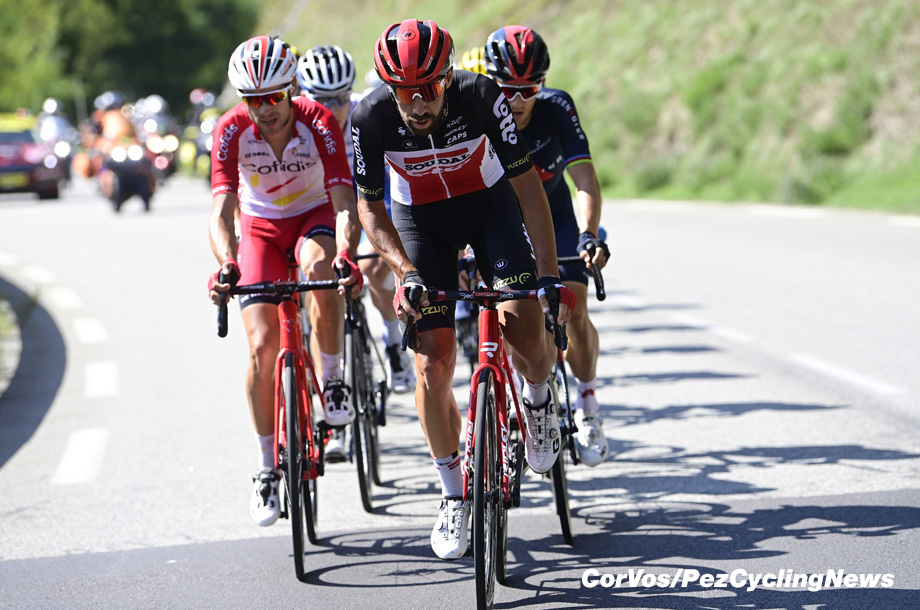 That man De Gendt in the break

The Ponferrada World champion was taking perfect lines and Hirschi had to take some extra risk to follow Kwiatkowski. The Sunweb rider could not ride his own lines and it showed, as Hirschi misjudged a fast corner completely. The stage winner in Sarran crashed and had to make up half a minute on the remaining leaders Kwiatkowski, Carapaz and Bilbao. This turned out to be an impossible task even for Hirschi. Without Hirschi, Carapaz took the full points on the Col des Aravis and the Ecuadorian also wanted to be the first on the Montée du plateau des Glières. INEOS Grenadiers has not had a great Tour so far, but today the two riders from the British team managed to colour the race. Kwiatkowski and Carapaz rode away from Bilbao on the steepest stretches of the Glières, on their way to a one-two. 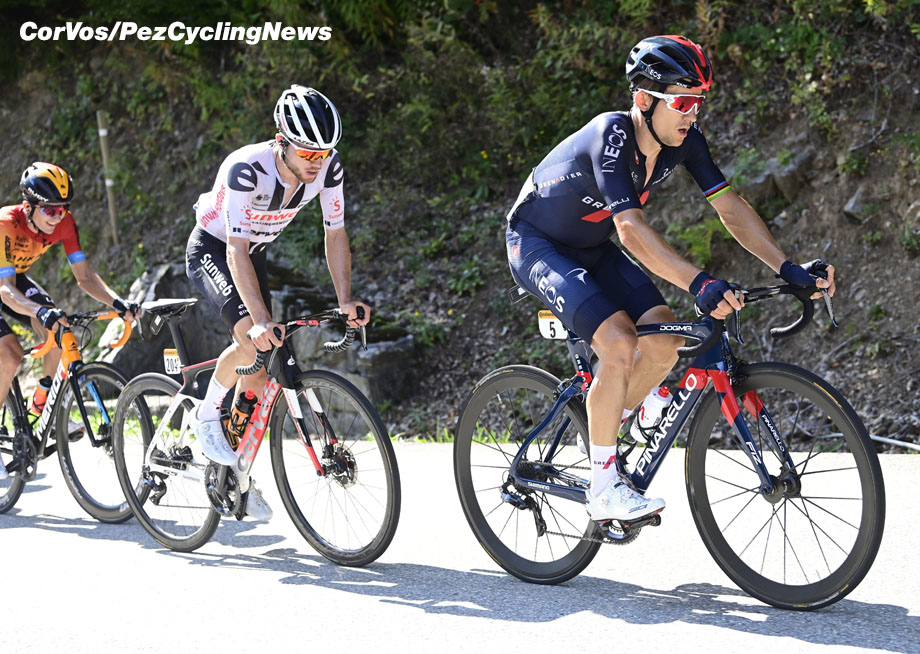 In the group of GC men, we saw an attack from by Mikel Landa. The Spaniard had his team lead all day yesterday, but it turned out that he did not have the legs at the end. Today Landa wanted to show herself and so he opted for the attack. The Bahrain-McLaren leader managed to pick up one escape rider after another, but the other classification men did not panic. 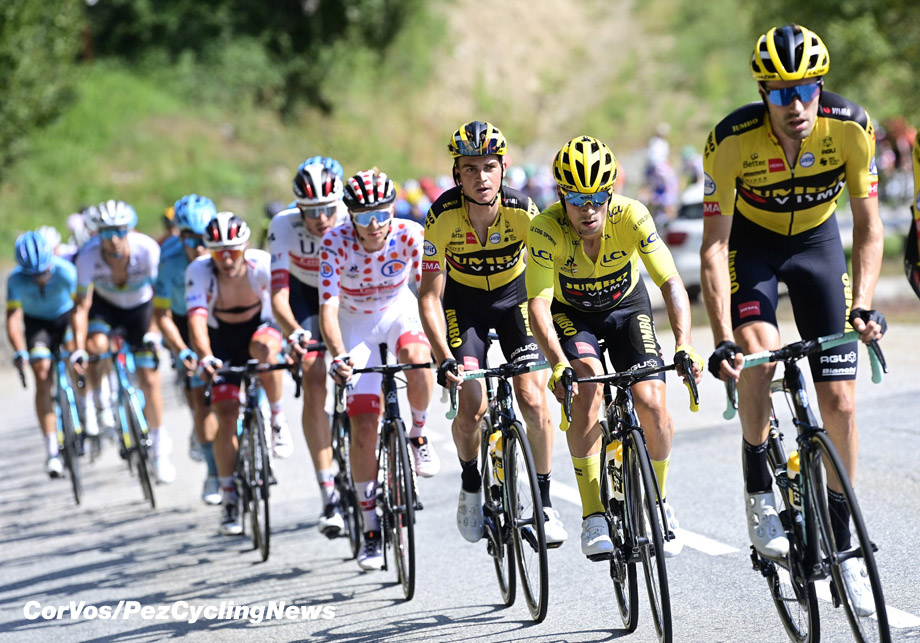 Tom Dumoulin and the Jumbo-Visma boys

Roglič could again count on Tom Dumoulin, Sepp Kuss and a very strong Wout van Aert, who took care of a large part of the Glières. The Belgian set such a pace that Rigoberto Urán and later Adam Yates were in trouble. Landa was also unable to get far, although he did receive help from Caruso just before the top. It was a brave attempt by Landa, but one that failed. 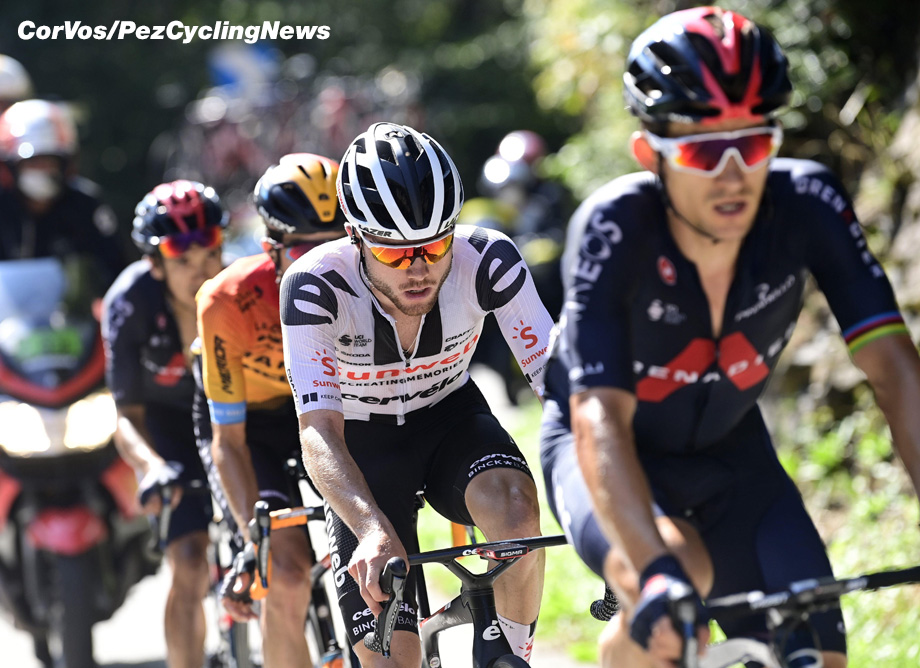 Hirschi was looking good till an untimely crash

Just before the mountain sprint, Landa was caught again by Pogačar, Roglič, Kuss, López, Enric Mas and Richie Porte, and so seven started the difficult Glières. Roglič took the initiative on the gravel road and the Tour leader put pressure on his competitors, but the Slovenian chose to start the descent of the Glières with Pogačar, López, Landa and Mas. 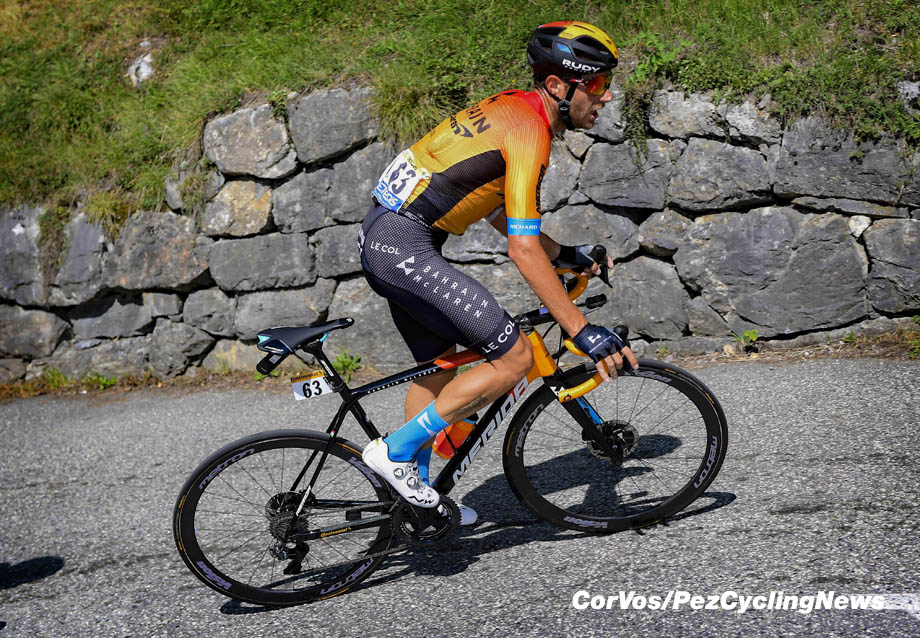 Caruso was up front for Landa 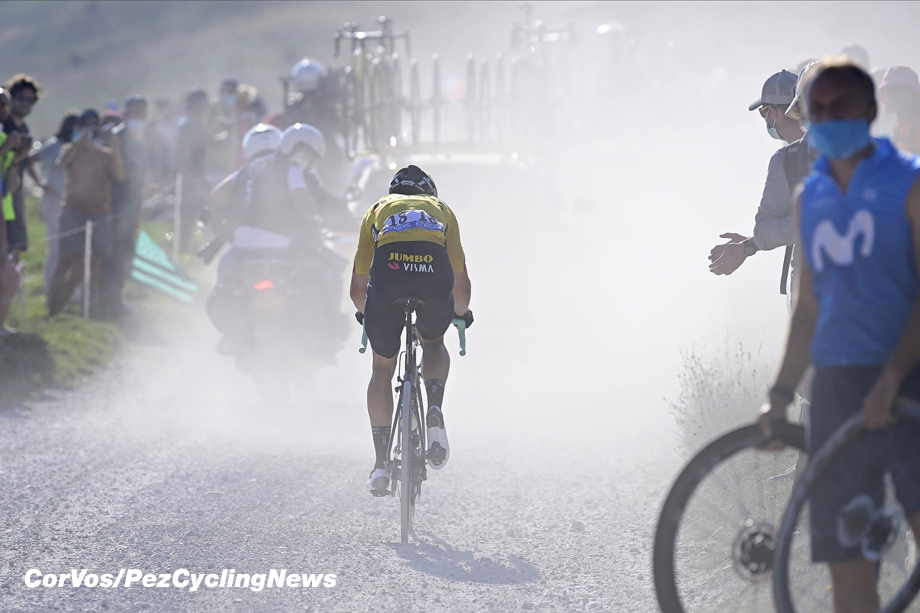 Roglič made sure he was out of trouble on the gravel

López, Landa and Mas had to keep racing in the last 25 kilometres, as Porte had to deal with a flat on the gravel. The Australian had to change bikes and ended up in a chasing group including Tom Dumoulin. The difference fluctuated around 30 seconds for a while, but Porte had to do most of the work on his own. 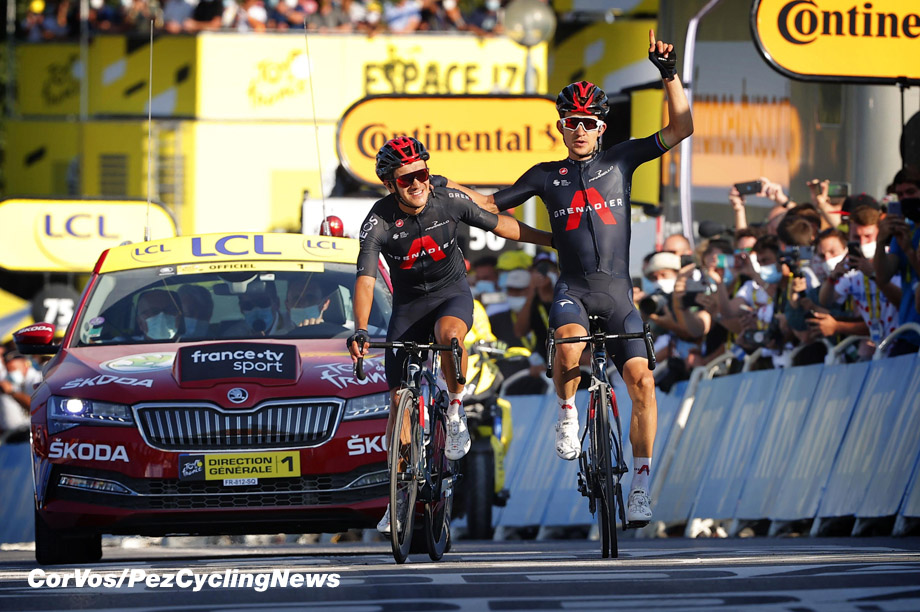 At the front, Carapaz and Kwiatkowski rode a team time trial to start the uncategorised Col des Fleuris with a good lead. On this not too steep climb, the two INEOS Grenadiers riders stayed together, while Porte returned to the Roglič/Pogačar group with an impressive effort. The Australian unintentionally also managed to drag Dumoulin and Caruso back to the elite group. 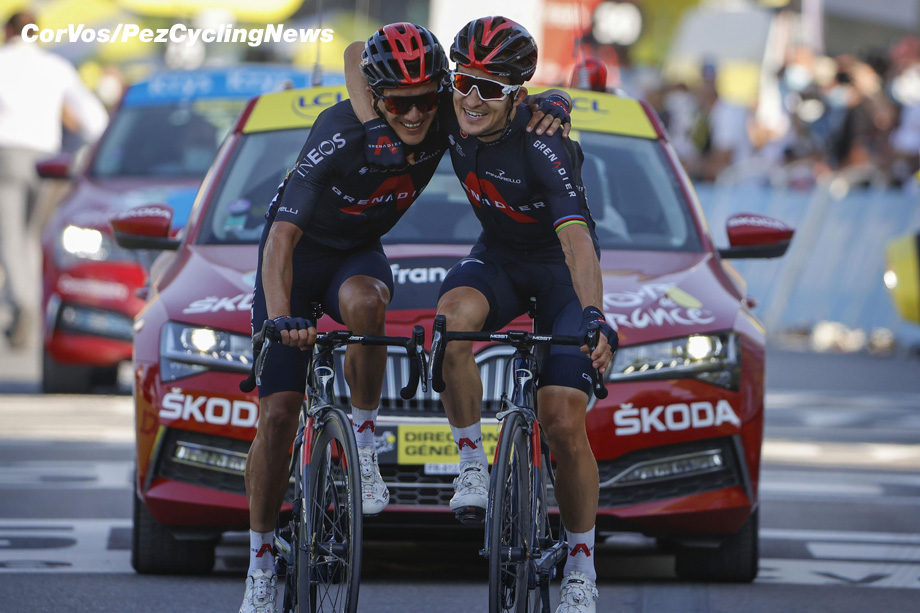 All happy at INEOS

With the favourites, the fight was decided after Porte’s return and so the focus in the final turned to Carapaz and Kwiatkowski. The two leaders had plenty of time to enjoy themselves in the final. Kwiatkowski was the first to cross the line from Carapaz. The Pole was able to give the troubled INEOS Grenadiers a much-needed victory. Carapaz was also a satisfied man, as he managed to wear the KOM jersey on the podium. 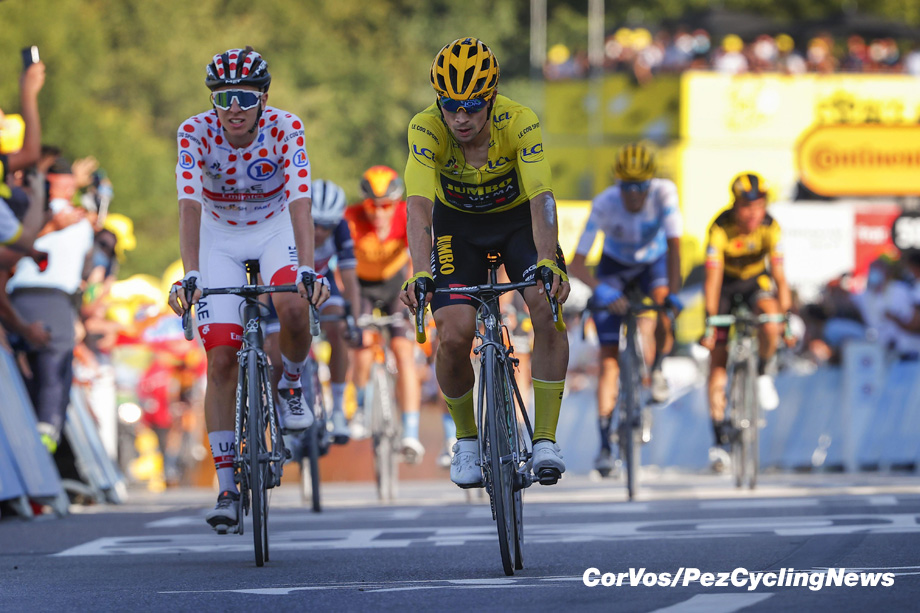 All safe for the top three

Stage winner, Michał Kwiatkowski (INEOS Grenadiers): “I’m just grateful to the whole team and Richard [Carapaz]. This is an incredible day for us. I’ll never forget that. I get nice moments in cycling but this one gave me goose bumps in the last kilometres, I don’t know how many but the gap was so big that we knew we were going to make it. [Marc] Hirschi was fighting against Richard for the polka dot jersey. He took a corner way too fast. I was right behind him. I went on my brakes. It was better to ride at 99% and stay safe. Hirschi wasn’t keen to work before, so we wanted to do our own race. We put on some show today and we deserve a big celebration.” 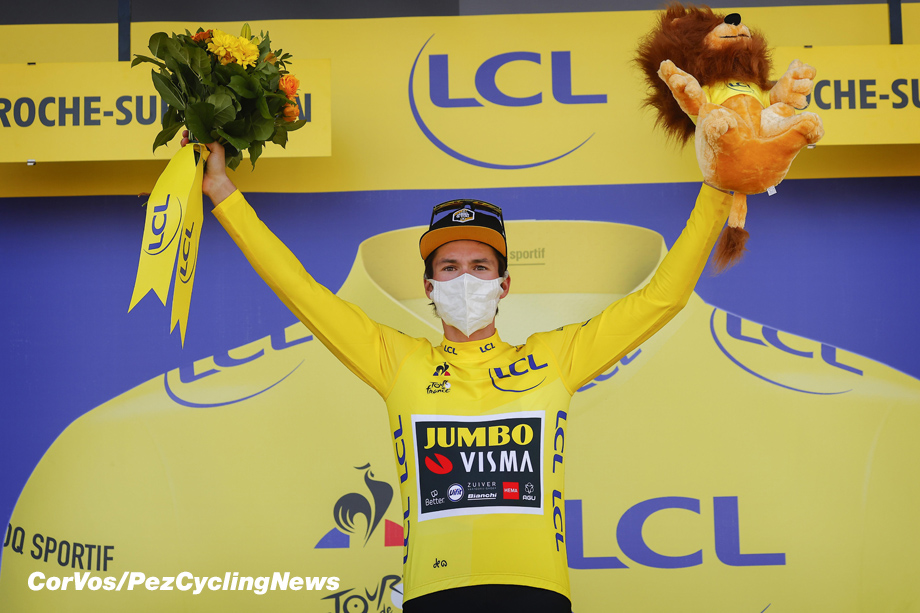 Not long to Paris

Overall leader, Primož Roglič (Jumbo-Visma): “It’s been two hards days in a row. But again the team did a great job, I was there, so yeah… It’s one day less to work. It is always a lot of pace to do, a lot of climbs to overcome. We managed it very good along with the team. I don’t remember what I said to Tadej on the descent. For sure, something fun. Everything is fine, we get along very well. I rode for myself, because it’s the safest thing to go through. I focus on myself because it’s what I can manage. So far we did a great job along with the team. There are some tricky days to come. The time trial will decide all the rankings, but tomorrow is antoher day to be focused because it’s far from a flat stage.”