Stage Report: For some riders, stage 19 was a pre-time trial rest day, but the battle for the green jersey caused another day of excitement. Sunweb’s Søren Kragh Andersen went solo in the finalé for his second Tour stage win after his stage 14 victory. The GC men rode home at their leisure to stay in the same positions. 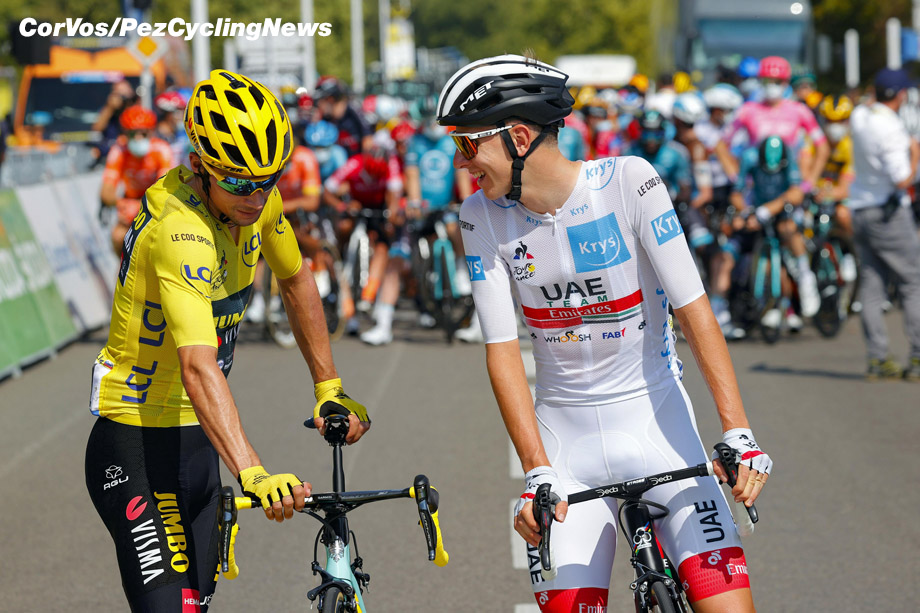 Stage 19 Route:
Tour director, Christian Prudhomme describes the stage: “Two days before the end of the race, the title and podium contenders might have the freedom to start focusing on the challenge that awaits the following day. It’ll therefore be up to the sprinters having survived the Alps to seize this opportunity to shine. The finish is really made for strong men.” 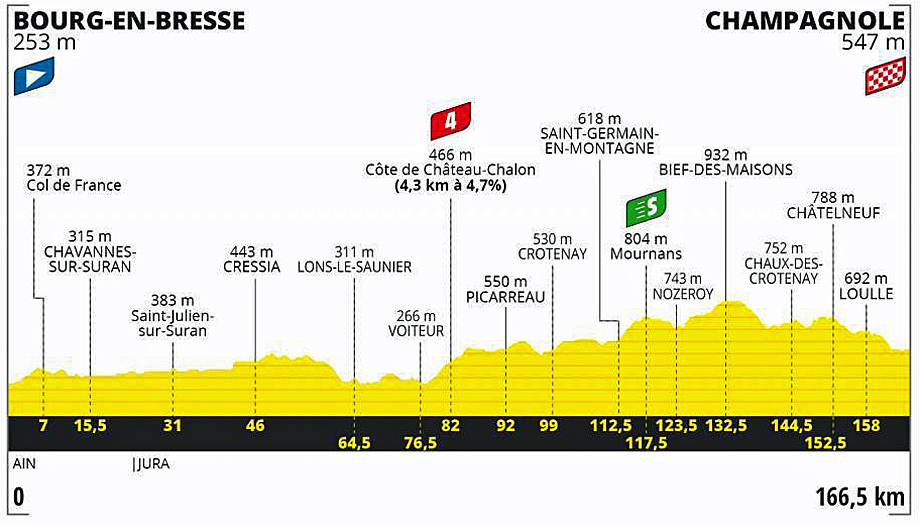 Today’s stage had a solo breakaway. The French TGV of Deceuninck – Quick-Step, Rémi Cavagna, attacked alone, 161 kilometres from the finish. Cavagna’s attempt took some pressure off his team, as there was no need for sprinter and green jersey wearer Sam Bennett and his team to do any work behind. 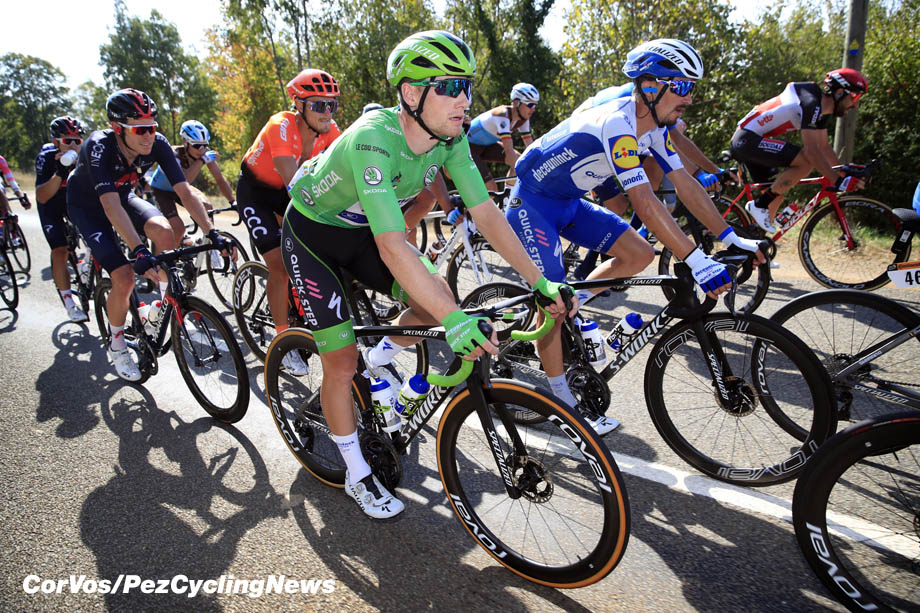 Stage 19 was very important for the green jersey battle

Cavagna rode at an average speed of almost 51kph in the first hour, partly thanks to the tailwind. The Frenchman was too fast for a group of pursuers. Dylan van Baarle, Geoffrey Soupe and Max Walscheid were unable to make get across. Initially, Guillaume Martin and Cyril Barthe were also in that group, but they dropped back to the peloton. Not much later, Van Baarle, Soupe and Walscheid were also swallowed up. 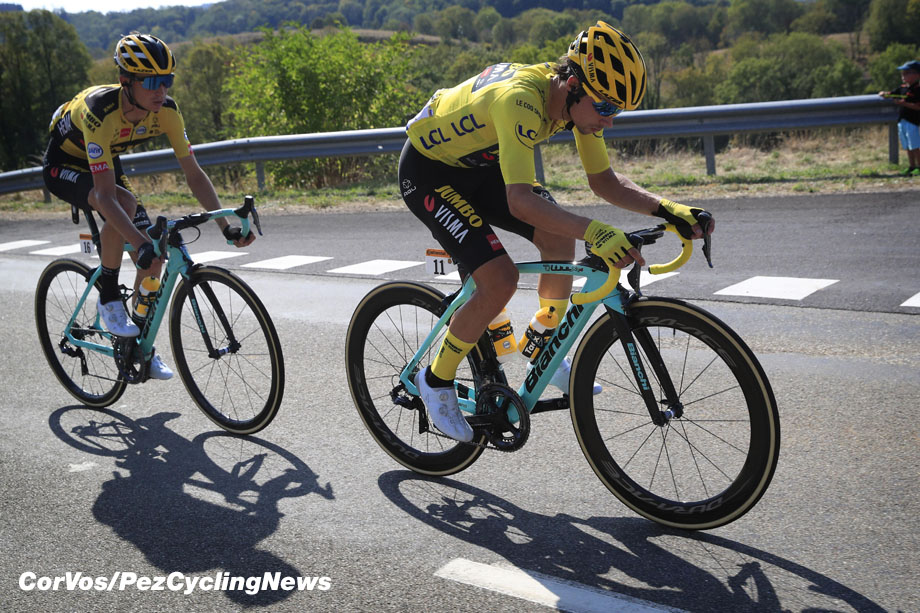 In the peloton, BORA-hansgrohe led the chase for Peter Sagan. The German team kept the difference to between 2 and 3 minutes for a long time. When the gap between Cavagna and the peloton was 1 minute, BORA eased off a bit. The race was then a cat-and-mouse game between the attacker and the sprinter teams. 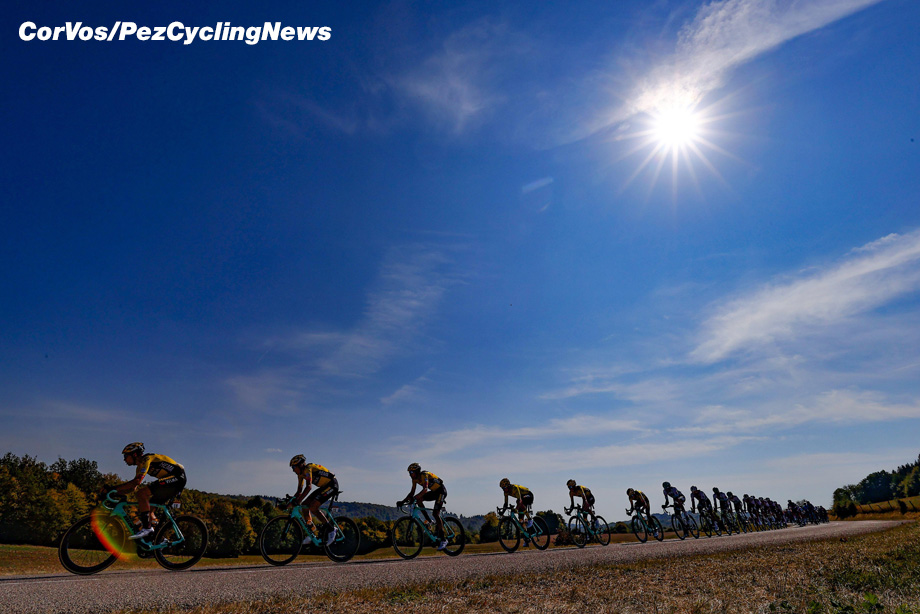 A fine autumn day for the Tour

At 50 kilometres from the finish, the peloton counterattacked in a slightly hilly zone. Benoît Cosnefroy, Pierre Rolland and Luke Rowe got together and soon joined Cavagna. At the intermediate sprint, Bennett again defeated Sagan taking more points in the green jersey classification. After the sprint the peloton got nervous on the narrow roads. There was an attack and a crash. 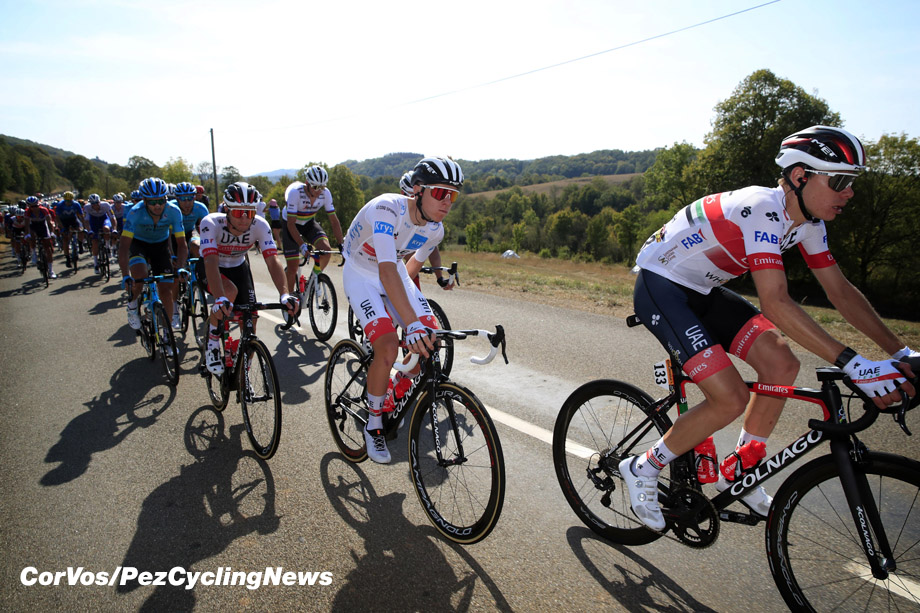 Tadej Pogačar up near the front 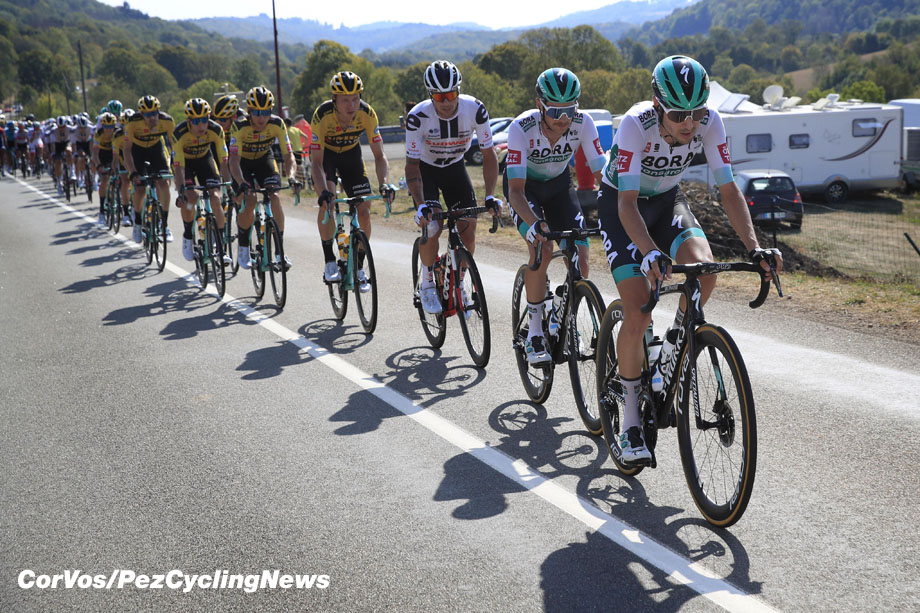 BORA-hansgrohe keeping the speed high before the intermediate sprint

The hills in the Jura and the fast pace through the attacks put Caleb Ewan into trouble several times. 30 kilometres before the finish, another twelve riders went away, including Peter Sagan and his shadow Sam Bennett. Rowe, Naesen, Stuyven, Devenyns, Van Avermaet, Trentin, Bauer, Mezgec, Arndt and Kragh Andersen were also there and they quickly took a minute on the peloton. 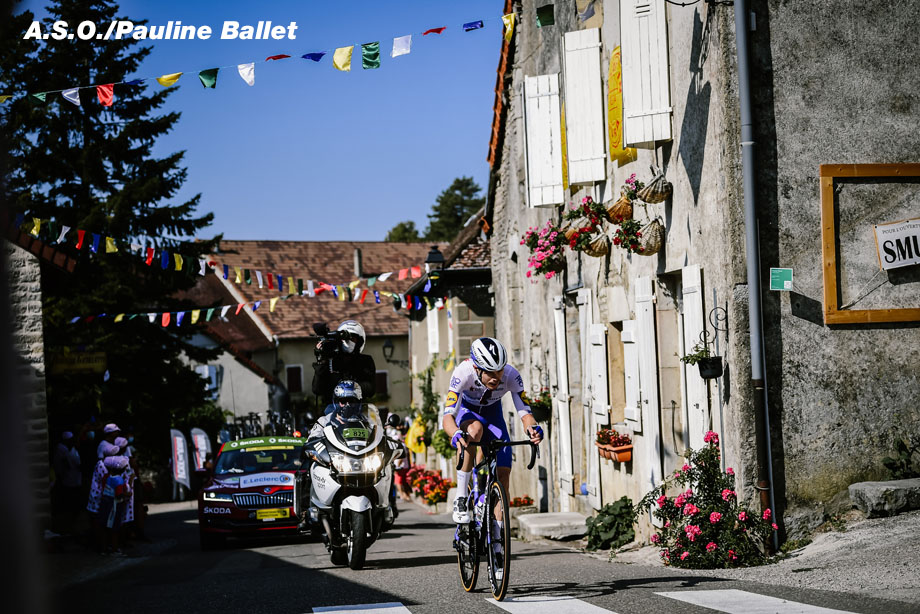 A lot of TT training for Rémi Cavagna 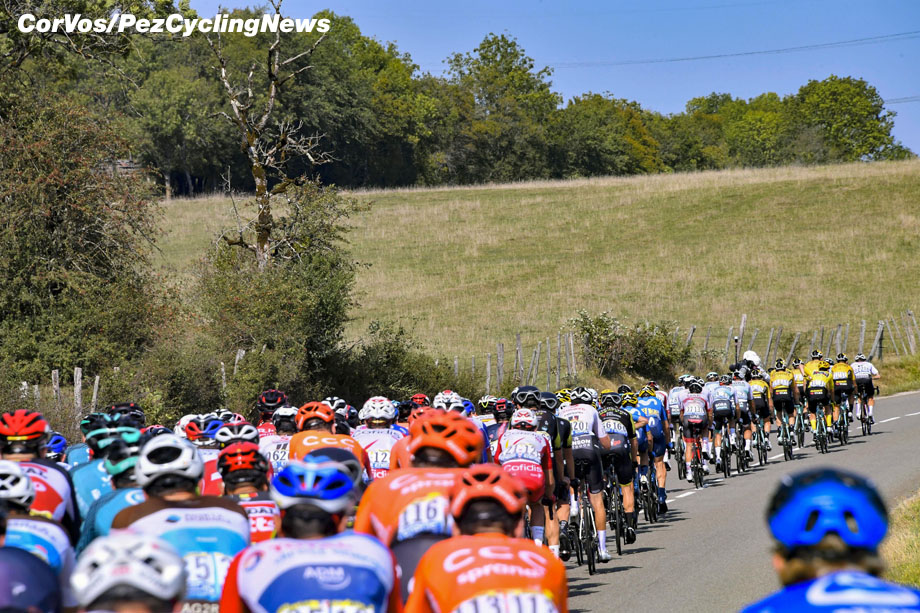 The chase was on behind Cavagna

Edvald Boasson Hagen, Bryan Coquard and Hugo Hofstetter counterattacked, but were too late to make the jump across. Lotto Soudal was the only sprinter team without a man in the front ranks and was therefore dependent on chasing, but Frederik Frison and Thomas De Gendt saw that it was a hopeless mission. The difference continued to increase, towards 3 minutes. 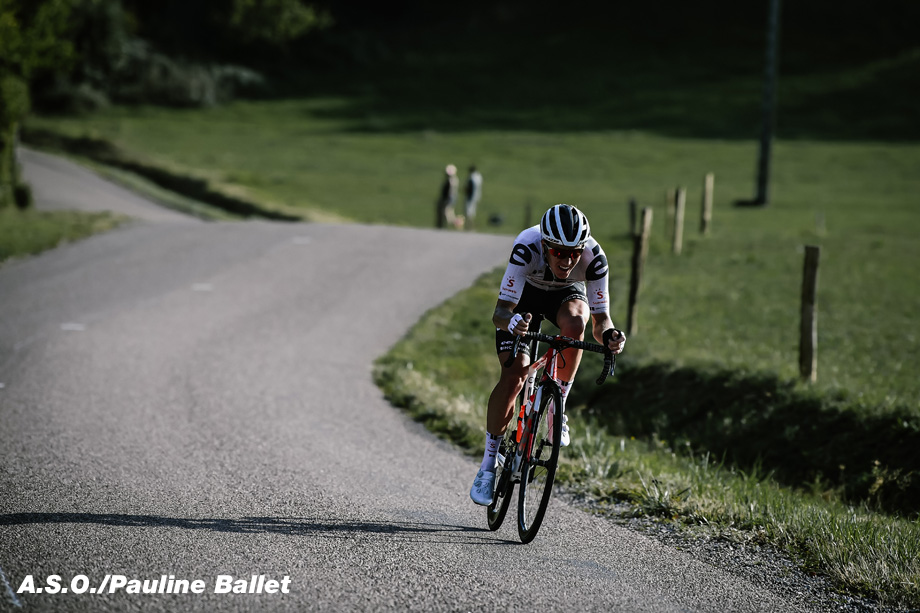 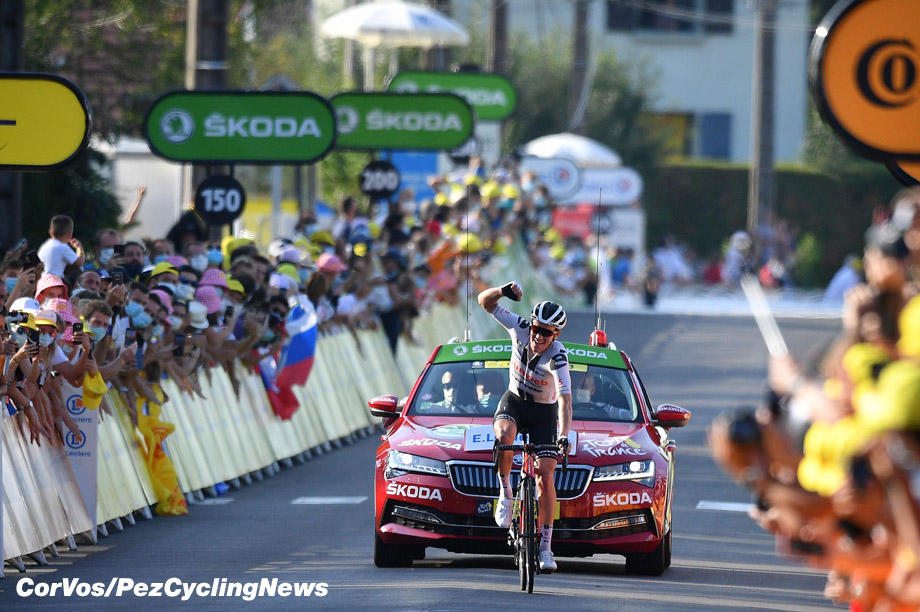 A minute in hand for Andersen at the finish

Fifteen kilometres to go and Søren Kragh Andersen took advantage of a quiet moment in the leading group. The Lyon stage winner immediately had a gap of 20 seconds because the pursuers were looking at each other. On the descent towards Champagnole, the Sunweb Dane managed to extend his lead to 40 seconds and when entering the final K he had a 1 minute lead. 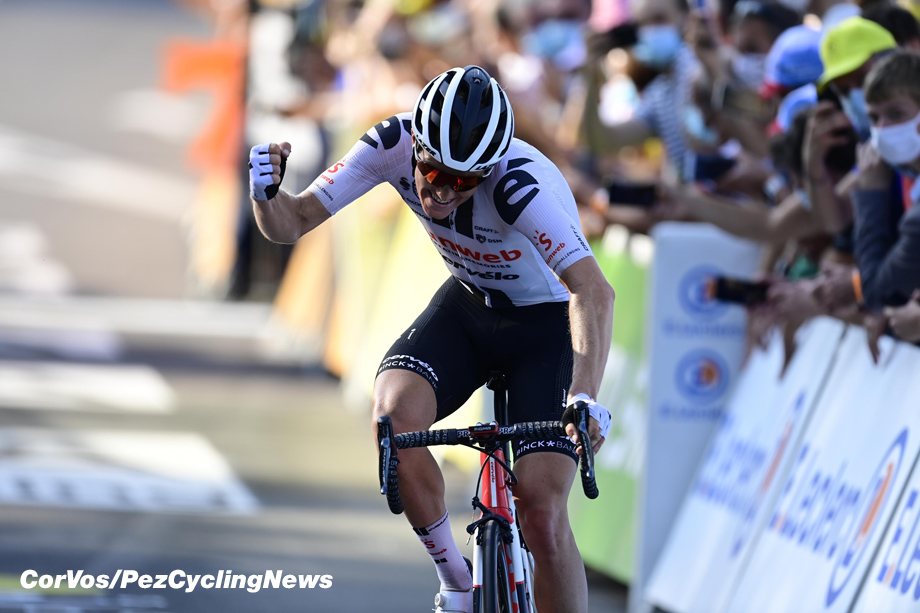 Another stage win for Andersen 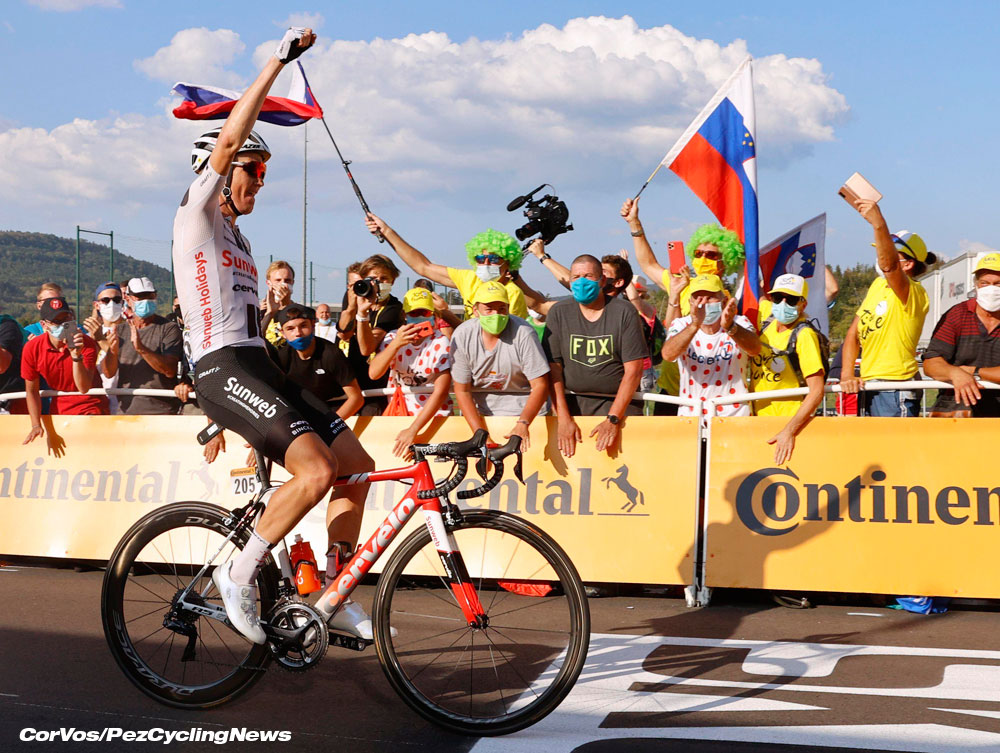 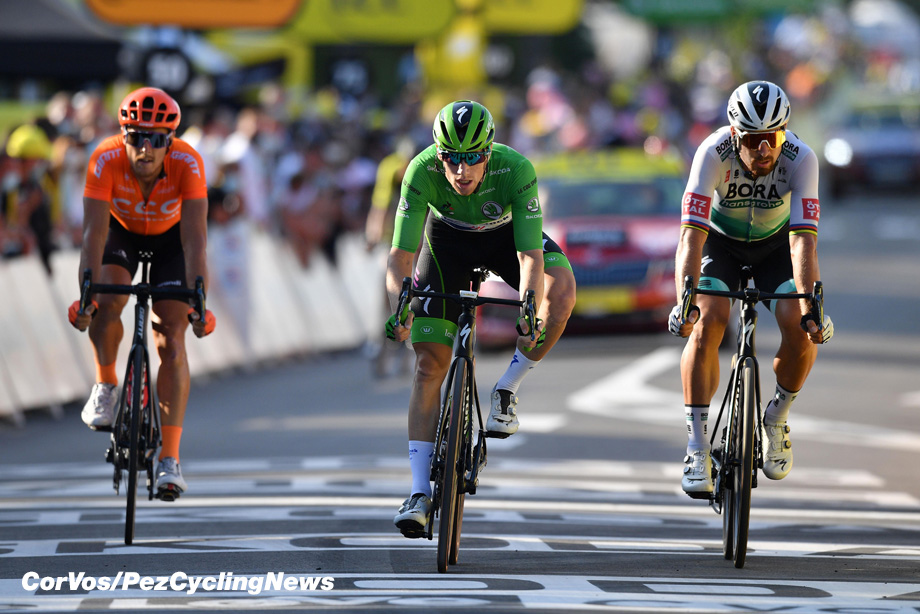 The green jersey should be safe for Sam Bennett

At 53 seconds from the stage winner, Luka Mezgec sprinted to second place, ahead of Jasper Stuyven, Greg Van Avermaet and Oliver Naesen. Behind that, Bennett beat his competitors in the green jersey competition, Sagan and Trentin in the sprint for the points. The peloton crossed the finish line at more than 7:30. 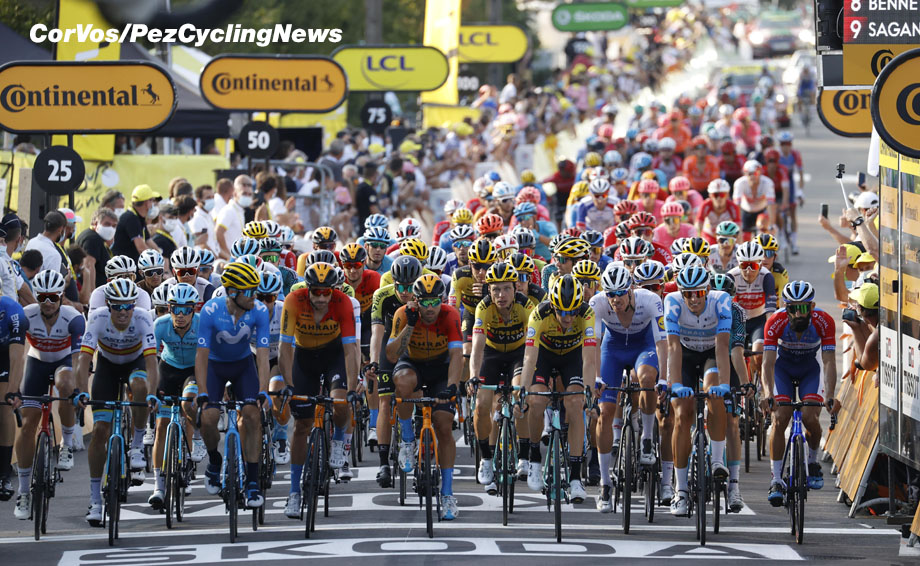 No change on the overall

Stage winner, Søren Kragh Andersen (Sunweb): “I have to say that, in the last kilometres, I was actually screaming in pure disbelief. I got two stage wins on the same Tour de France… It’s incredible. I’m speechless. When I saw who was in the breakaway group, I realized I was in the mix with some of the best riders of the world for this type of race. I honestly didn’t know how to beat them, and I was on my limit too. But then I realised that, if I managed somehow to get a small gap, it may enable me to pull it off… And that’s exactly what happened. This is a memory I will carry in my mind for the rest of my life.”

# Keep it PEZ for the final two stages. #