Stage Report: Stage 3 was one of the few sprinter’s days. At the end of another wet ride, Caleb Ewan (Lotto Soudal) pushed his way through a messy finalé for the victory. The little Australian got the better of Ireland’s Sam Bennett (Deceuninck – Quick-Step) and European champion Giacomo Nizzolo (NTT Pro Cycling). Julian Alaphilippe (Deceuninck – Quick-Step) held the overall lead. 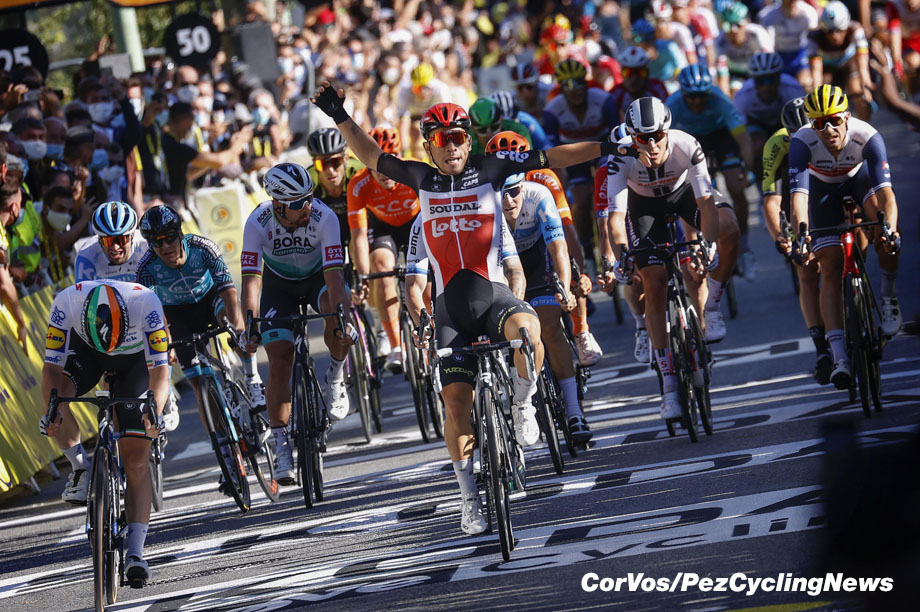 Crafty Caleb swooped to the win 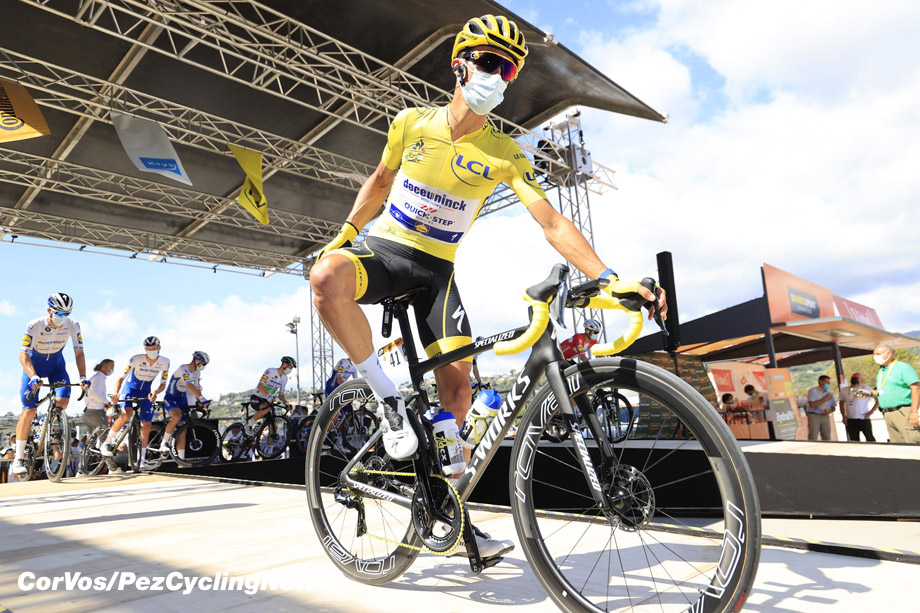 Alaphilippe back in yellow

Stage 3 Route:
Tour director, Christian Prudhomme describes the stage: “The riders might be inspired by the perfumes of Grasse as they leave the Nice area. They will then ride along the Route Napoléon with far less obstacles than the ones witnessed by the Emperor after returning from exile on the Island of Elba. The flat final part as we get closer to the Sisteron Citadel shouldn’t trouble the plans of the sprinters’ teams.” 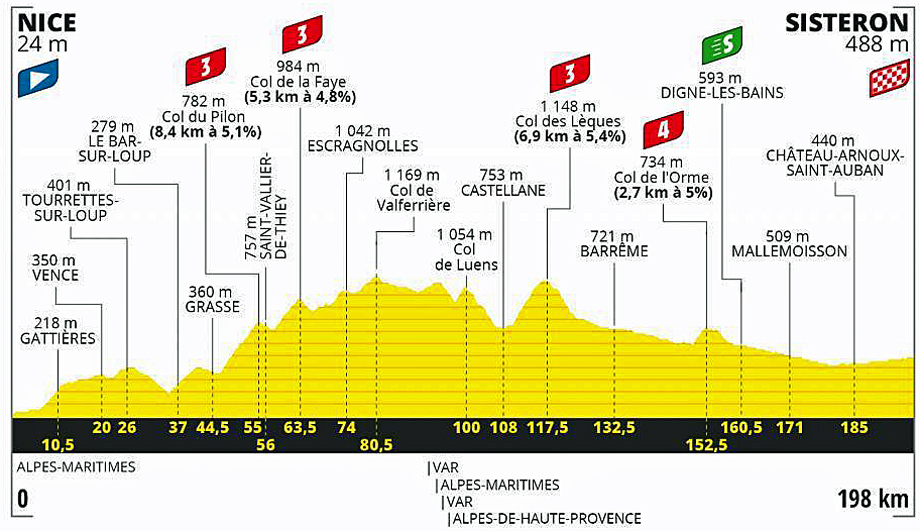 Jérôme Cousin (Total Direct Energie), Anthony Perez (Cofidis) and Benoît Cosnefroy (AG2R-La Mondiale) made up the ‘Break of the Day’. Oliver Naesen was also there, but his job was to get teammate and mountain jersey wearer, Cosnefroy, in the break. After that, the Belgian dropped back to the peloton. 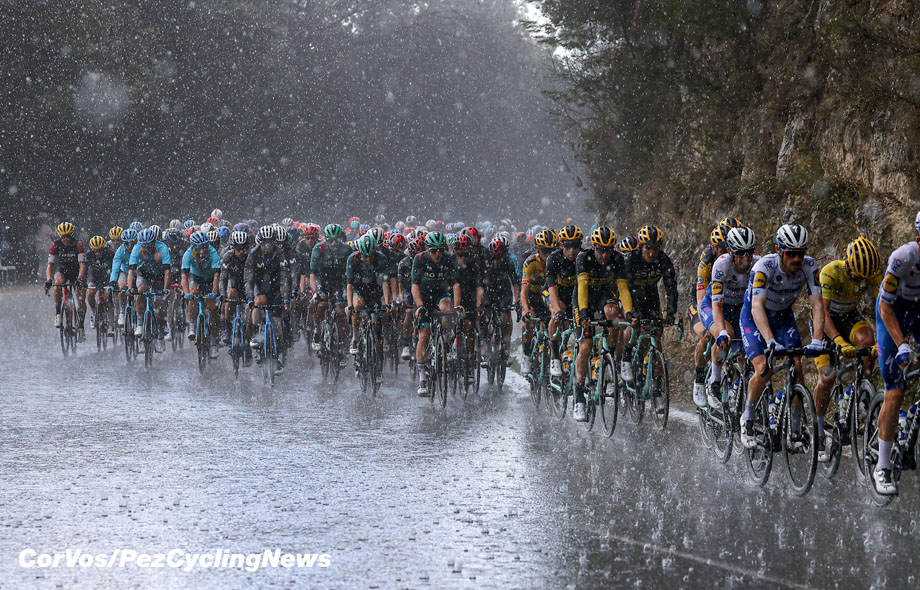 Another wet day in France

The three front runners soon distanced the peloton, where Deceuninck – Quick-Step set the pace, which was expected. The difference fluctuated between 1:30 and 3 minutes throughout the day. But two of the three up front had something else on their mind: Cosnefroy and Perez were on the same KOM points (18) and wanted more. 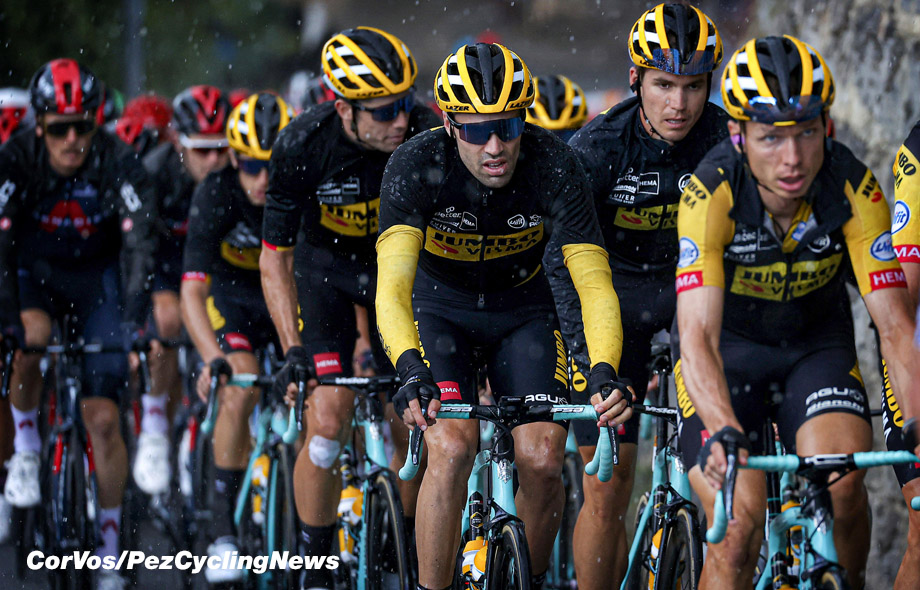 Tom Dumoulin and Tony Martin make the best of it

On the first two climbs, the Col du Pilon and the Col de la Faye (both Cat 3), Perez managed to outdo his competitor. As a result, the Cofidis rider took over the virtual polka dot jersey from Cosnefroy. Although two more categorised climbs were still to come, the two eased up and left the brave Cousin alone in the lead. 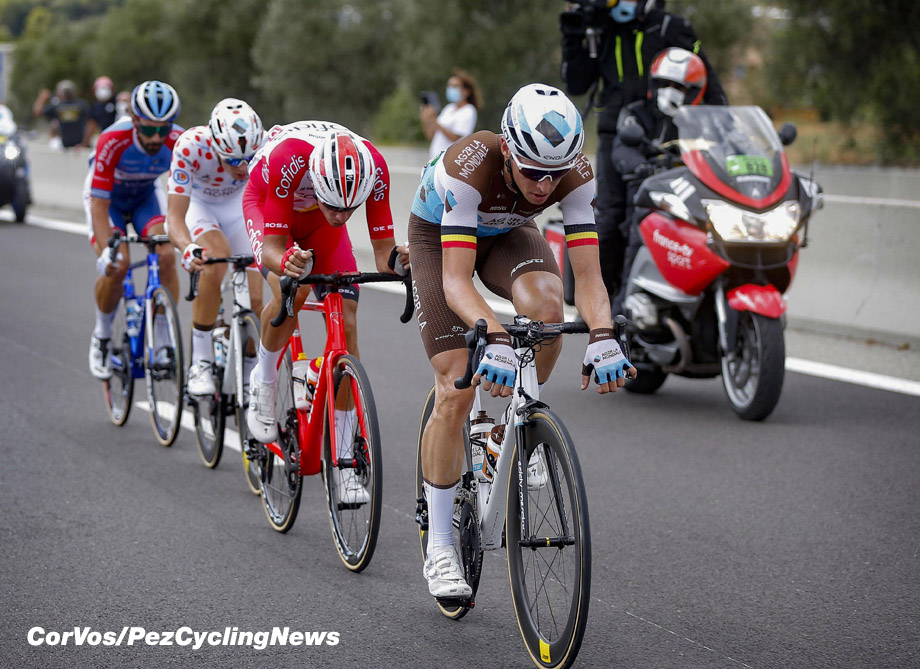 The break of the day – Looking for KOM points

The peloton took it easy and let Cousin struggle. At one time the difference was two minutes and then four. On the penultimate climb Cosnefroy and Perez sprinted for the remaining points, Cosnefroy won as Perez had a flat tyre. The Cofidis rider had to start the descent while waiting for anew wheel, but he then unluckily collided with his own team car. 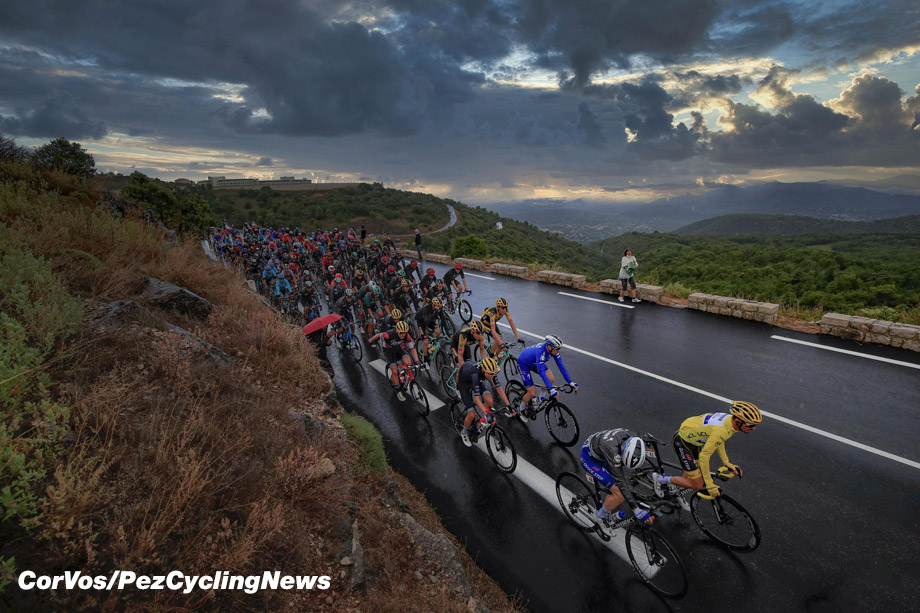 Alaphilippe, the only bright point on a dull day

A possible fractured collarbone and the end of his hopes for the polka dot jersey. 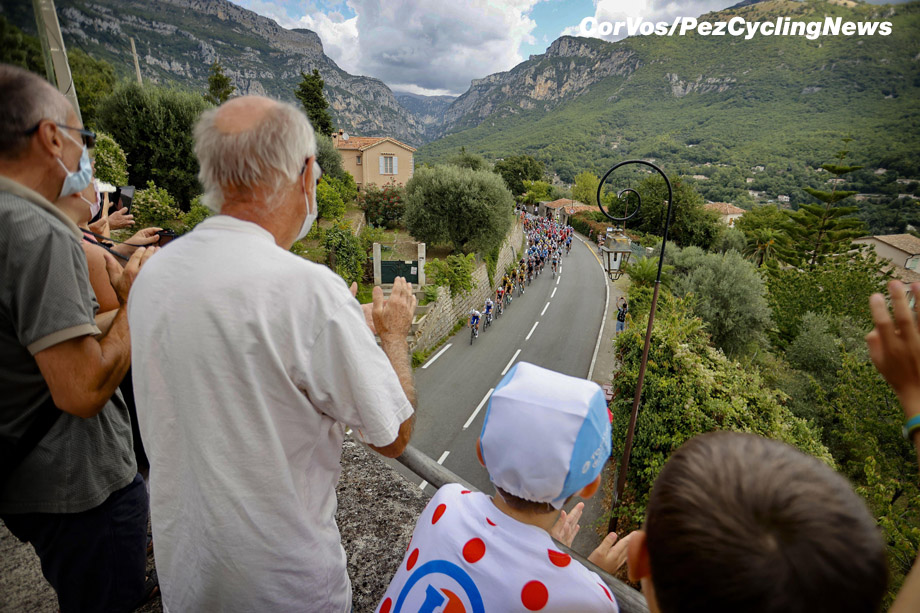 It didn’t rain all day

With 39 kilometres to go, and Peter Sagan to the point in the peloton at the intermediate sprint. Sagan beat Niccolò Bonifazio, Giacomo Nizzolo and Alexander Kristoff. The gap to Cousin at that point was less than 1 minute. Sixteen kilometres from the finish and it was curtains for the Total Direct Energie rider, but he did receive the combative prize. 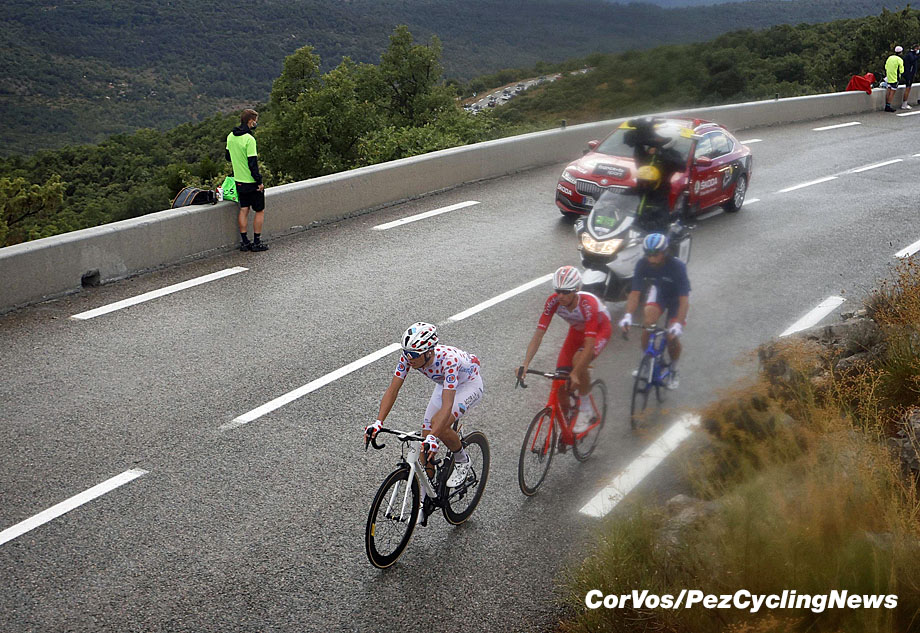 The various trains were put on the front for both the sprinters and to keep the GC riders safe. On a roundabout, 7 kilometres from the finish, there was a small crash. Wout van Aert (Jumbo-Visma) was involved and so could forget about a good result. Benoît Cosnefroy was also on the ground, but suffered little damage. 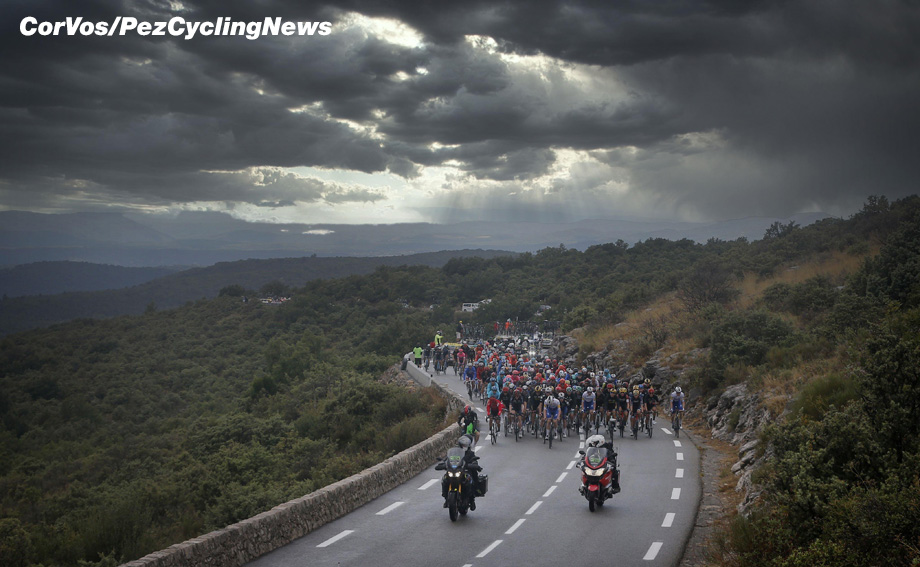 The peloton was led by Deceuninck – Quick-Step with Sunweb and Lotto Soudal taking the lead as the race entered the last kilometre, but the Belgian team were unable to place their sprinter in an ideal position. 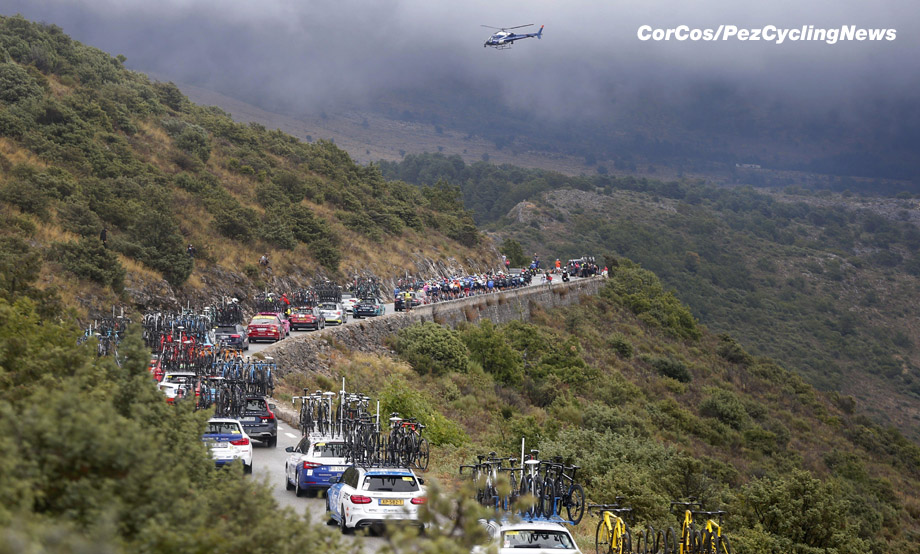 Nice day for a car ride

It was a chaotic sprint, in which Giacomo Nizzolo was the first to jump. That turned out to be too early, because he was passed by Sam Bennett. The Irishman seemed to be heading for victory, but was overtaken by Caleb Ewan in the last meter. 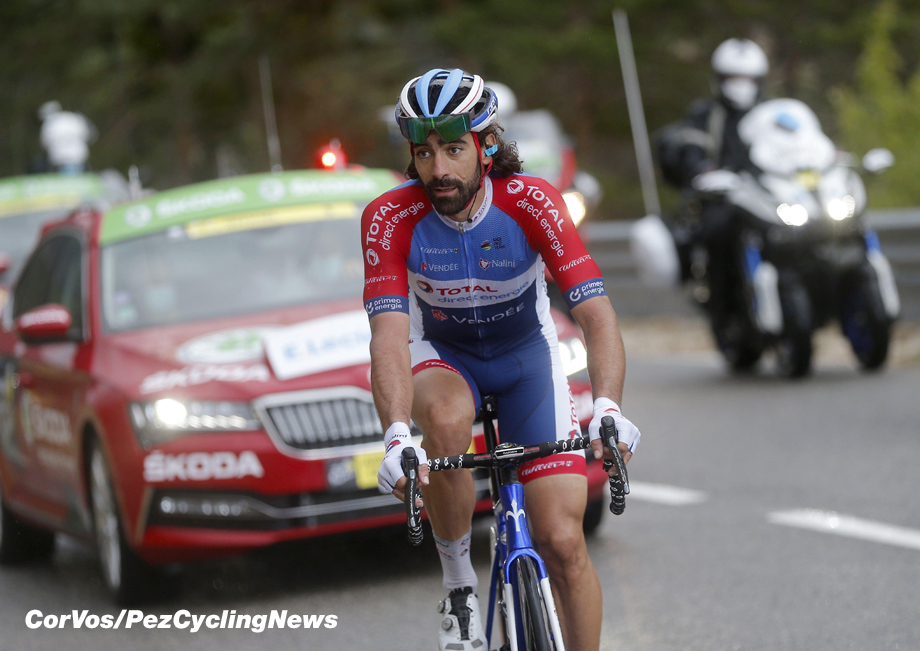 Cousin was left out front on his own

It is an important victory for Lotto Soudal, who have had a hard first three days. The Belgian team lost John Degenkolb and Philippe Gilbert on the opening day and Ewan finished last on stage two, but the Australian had the legs to win in Sisteron. 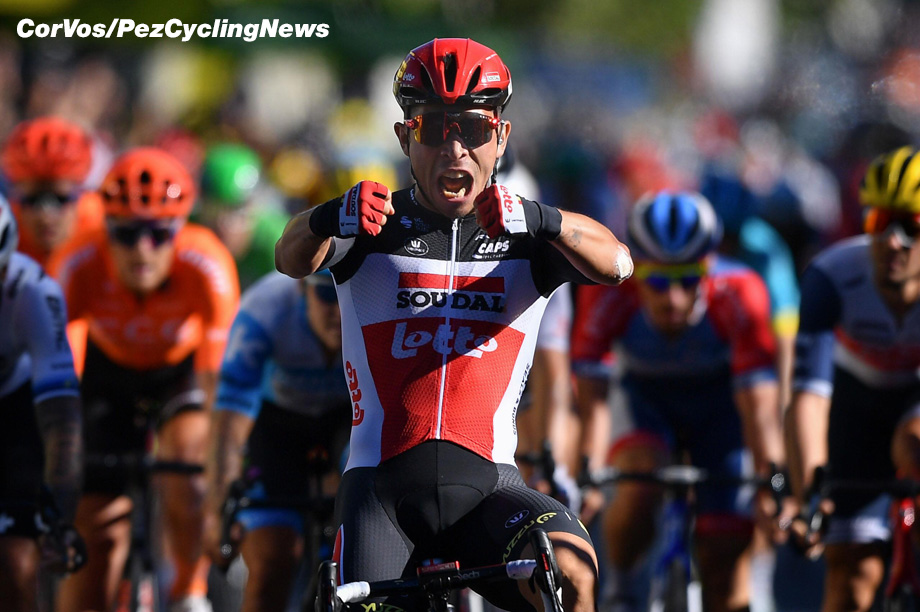 Stage 3 winner, Caleb Ewan (Lotto Soudal): “The first days were not great because we lost two riders, but I remained motivated. I knew I could win the sprint. Everyone gave 110% today. They kept me infront very well, so that I could ride on the wheels until the last sprint. I finally found my way. I took a risk by finding it, but I came with high speed and it worked. The first wins were very special. The Tour de France is the biggest race in the world, where everyone wants to win. After last year I hoped to win in the coming years. The opportunities are rare, so we have to take every opportunity that presents itself, even if it is always difficult.”

# Stay PEZ for all the Tour de France action. #