Stage Report: Stage 4 had the first summit finished of the 2020 Tour de France and fireworks were predicted for the final kilometres. The top men didn’t disappoint and Primoz Roglič (Jumbo-Visma) came out on top. Julian Alaphilippe (Deceuninck – Quick-Step) finished at the front to hold his overall lead. 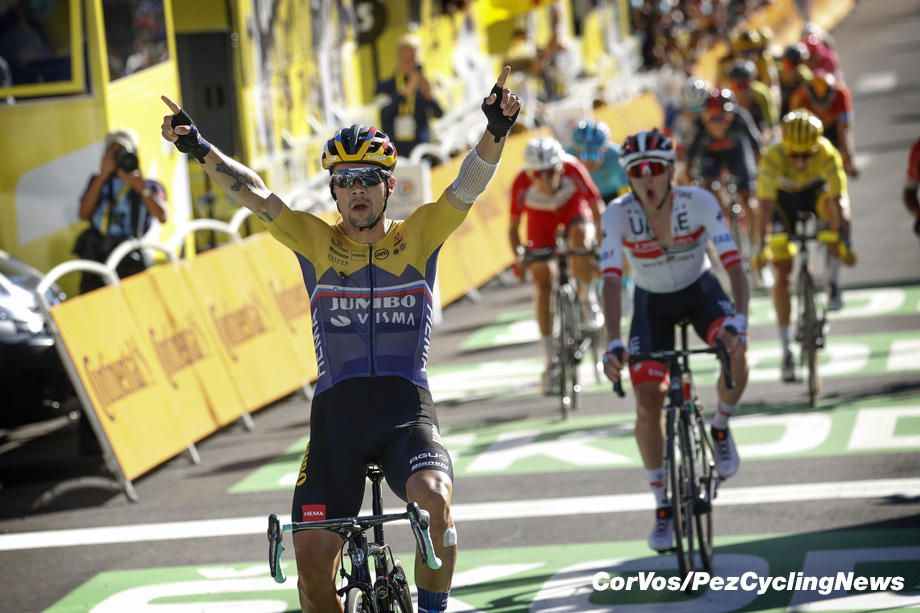 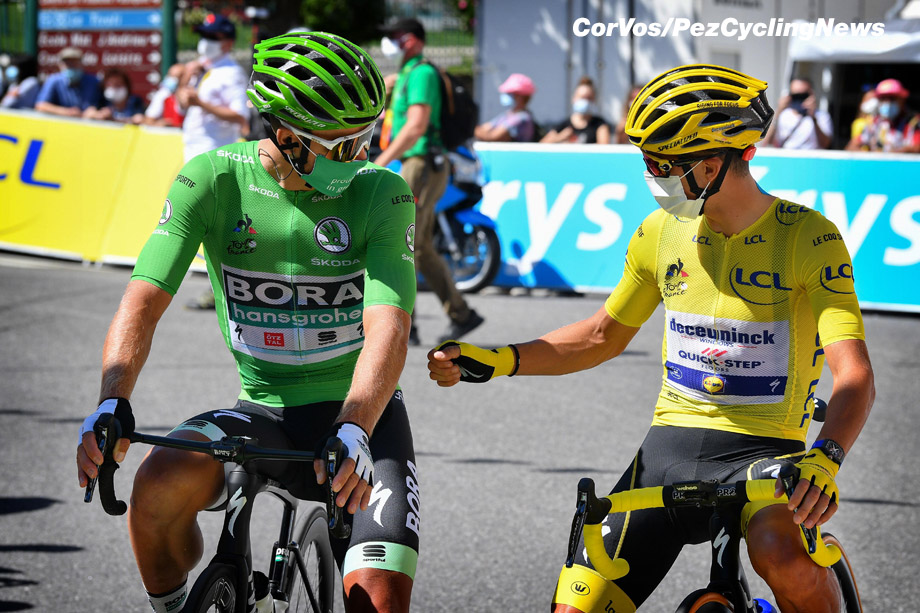 Stage 4 Route:
Tour director, Christian Prudhomme describes the stage: “An altitude finish as early on the Tour is extremely rare. The Grand Départ in Nice allows the race to evolve rapidly in the spectacular scenery of Hautes-Alpes. The day’s program with a first hilly excursion in the Dévoluy mountains isn’t made to split the pack too much. But the final climb to Orcières-Merlette, 1,800 metres high, should give some precious information on the state of form of the favourites.” 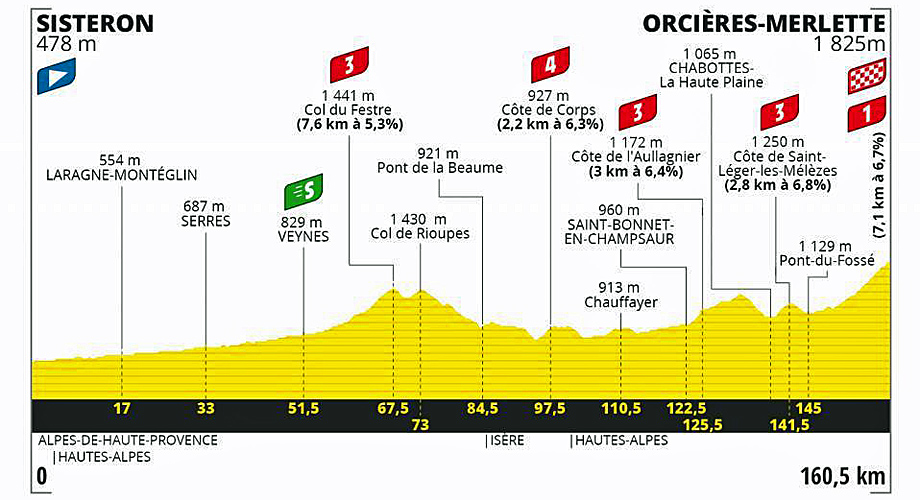 After two difficult stages in Nice and a sprinters stage to Sisteron, it was time for the first uphill finish in the 2020 Tour de France. The ascent to the winter sports resort of Orcières-Merlette was last used in 1989 for a mountain time trial won by Steven Rooks. And in 1971, Luis Ocaña managed to take 9 minutes out of Eddy Merckx. Those differences were not expected this time, but it was important for the Tour favourites to stay focused and not lose time. 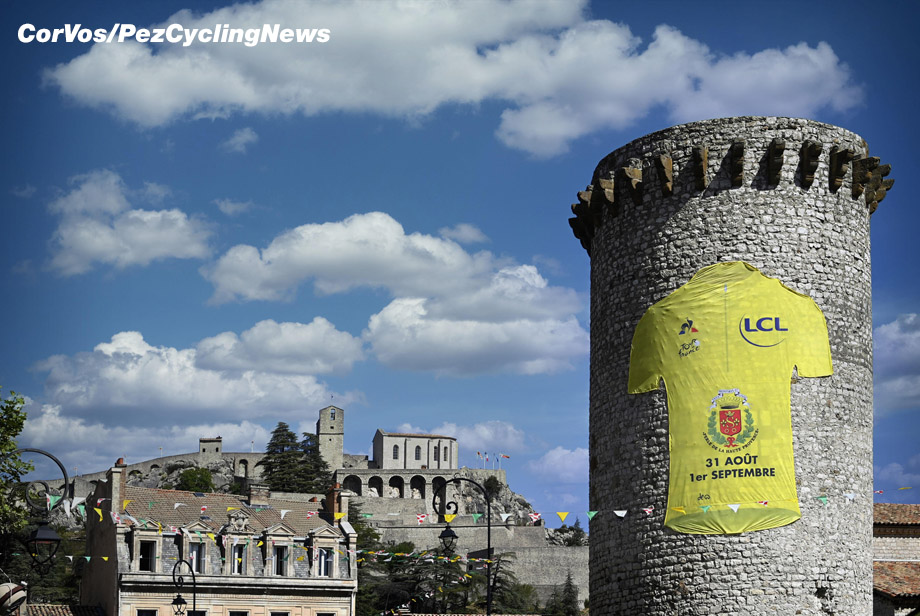 The start town of Sisteron

Six riders soon had a lead of 4 minutes: Tiesj Benoot, Alexis Vuillermoz, Nils Politt, Krists Neilands, Matthieu Burgaudeau and Quentin Pacher. Vuillermoz became the virtual leader after 20 kilometres, as the Frenchman was just under 4 minutes behind his fellow countryman Julian Alaphilippe, who had his Deceuninck – Quick-Step control the peloton. 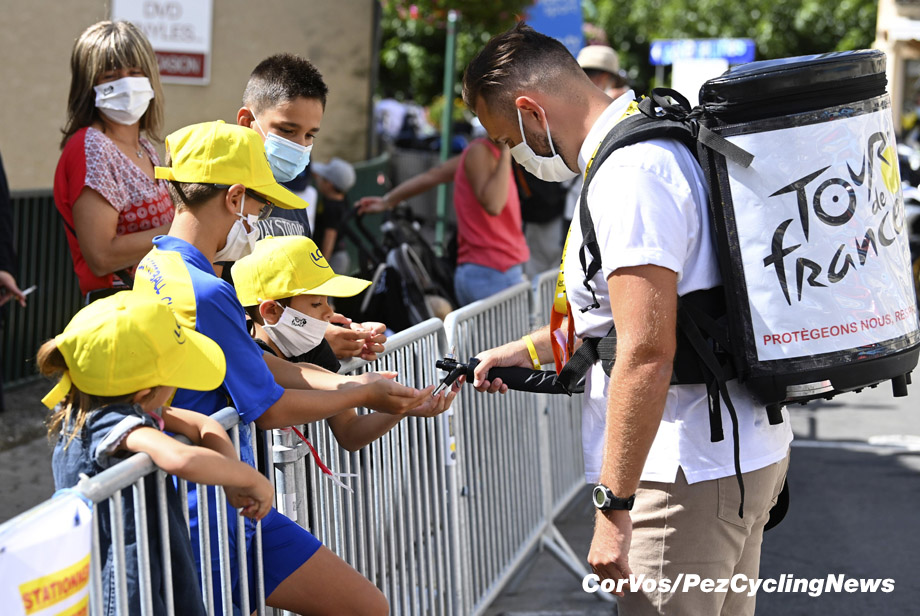 Hand wash for everyone

The difference between the break and the peloton continued to fluctuate around 3 minutes. At the intermediate sprint in Veynes, after 50 kilometres, Politt took 20 points. Burgaudeau and Benoot were good for 17 and 15 points. In the peloton, green jersey Peter Sagan managed a few points, but Sam Bennett was the best and now has the points as the Slovak. 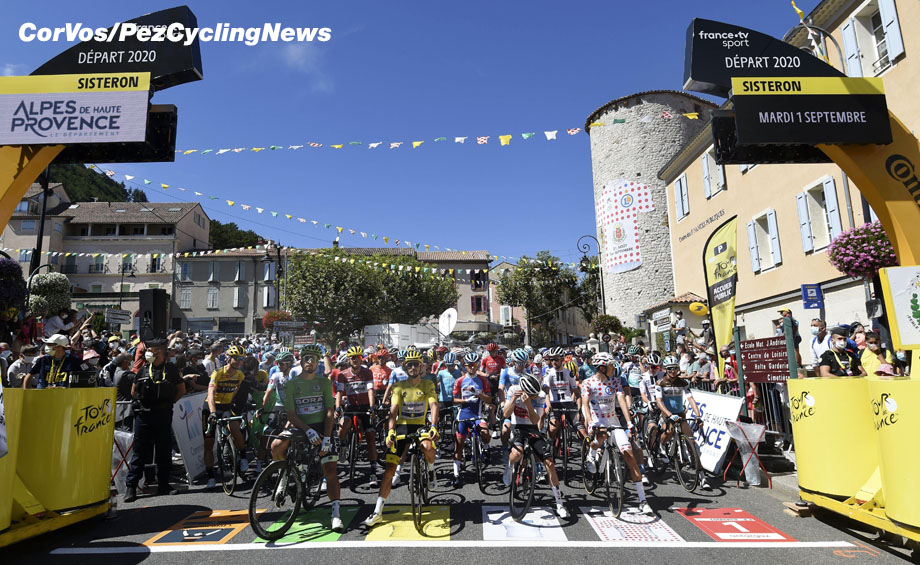 Ready at the start for a hard finish

20 kilometres after the only intermediate sprint, there was KOM points to be gained. The Frenchman Pacher was the first to top of the Col du Festre and received 2 mountain points. Wout Poels ran into problems on the Festre. The Bahrain-McLaren climber has been riding with a broken rib and bruised lung since a crash on Saturday and was mainly concerned with survival. 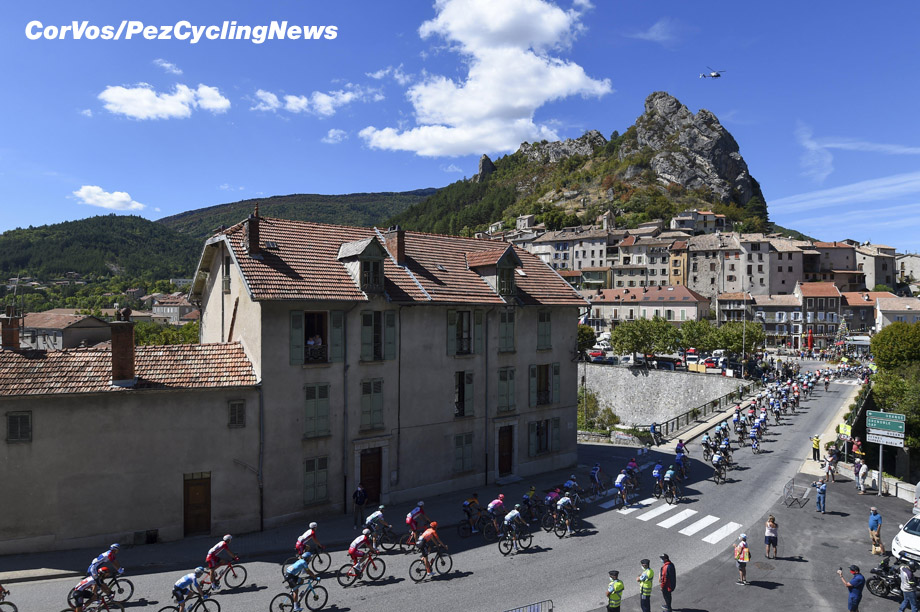 On the second climb of the day, the Cat 4 Côte de Corps, it was again Pacher who was first. On the descent Nils Politt tried to escape and then at 54 kilometres from the finish the German accelerate again. This time Politt had Pacher and Vuillermoz with him, the other escapees followed at a small gap. 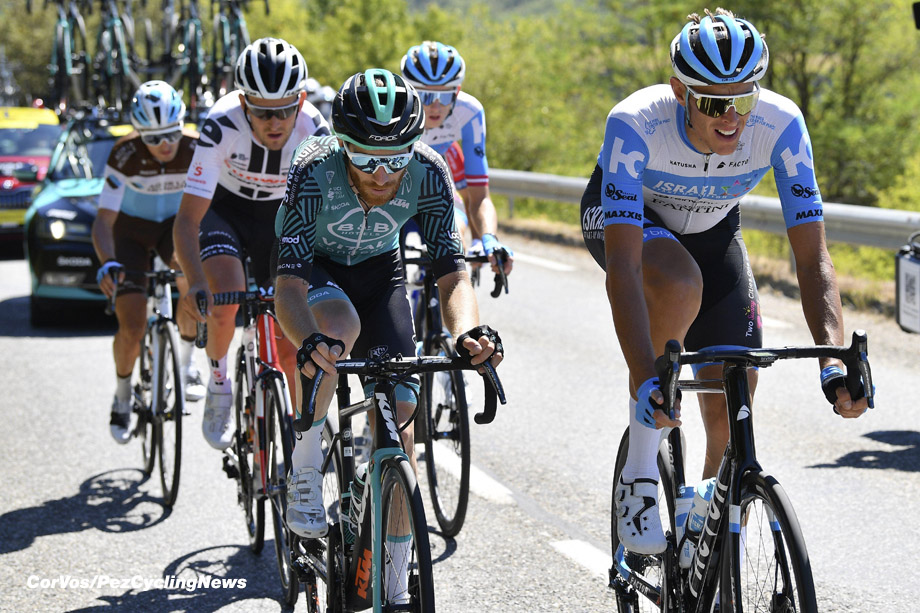 The five leaders made each other’s lives miserable, but not much later came to the realisation that working together was a better option. Benoot, Pacher, Burgaudeau, Neilands, Vuillermoz and Politt started the next climb of the day, the Côte de l’Aullagnier, more than 2 minutes ahead. The mountain points went to Pacher and Politt. Behind; the peloton started to speed up. 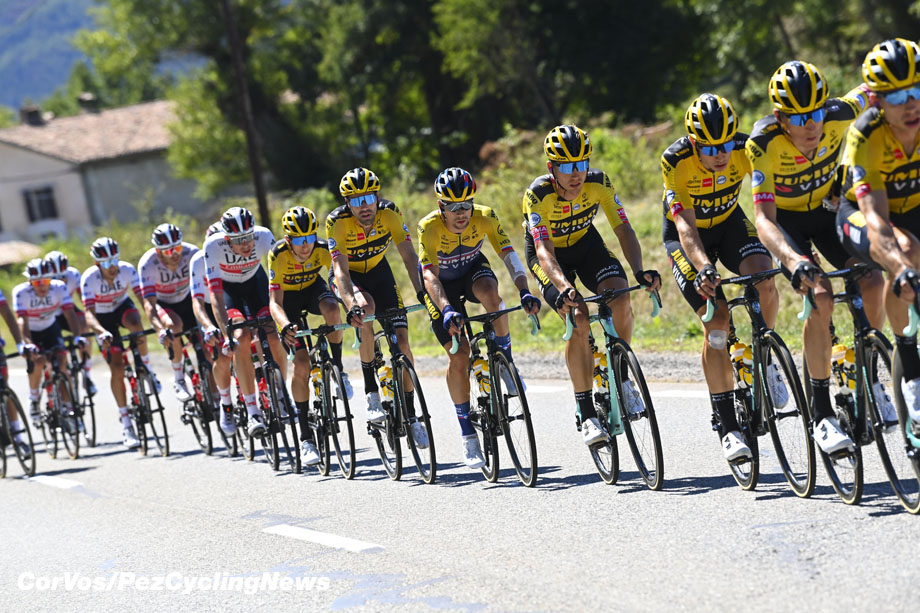 Deceuninck – Quick-Step took control of the chase, but Jumbo-Visma and UAE Team Emirates were next in line

Most of the sprinters were dropped on the Côte de l’Aullagnier, while the lead of the front group became noticeably smaller. On the descent of the Aullagnier, Benoot misjudged a corner at high speed and flew over the crash barrier, but luckily the damage was not too bad apart from a damaged bike. Benoot got back on a new bike, but had no chance of the stage victory. 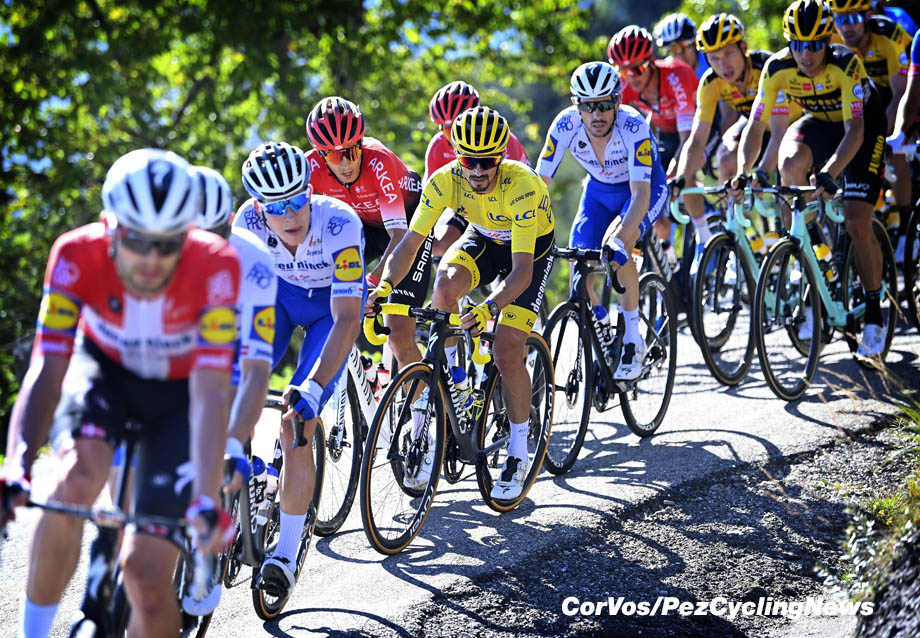 At the front, Neilands proved too strong for Pacher, Politt, Vuillermoz and Burgaudeau. Israel Start-Up Nation’s rider wanted to start the climb to Orcières-Merlette solo. This didn’t work, but he did get the combative prize. For the stage victory, it was the GC riders who were all at the front at the start of the final climb, but we had to wait for the expected fireworks. 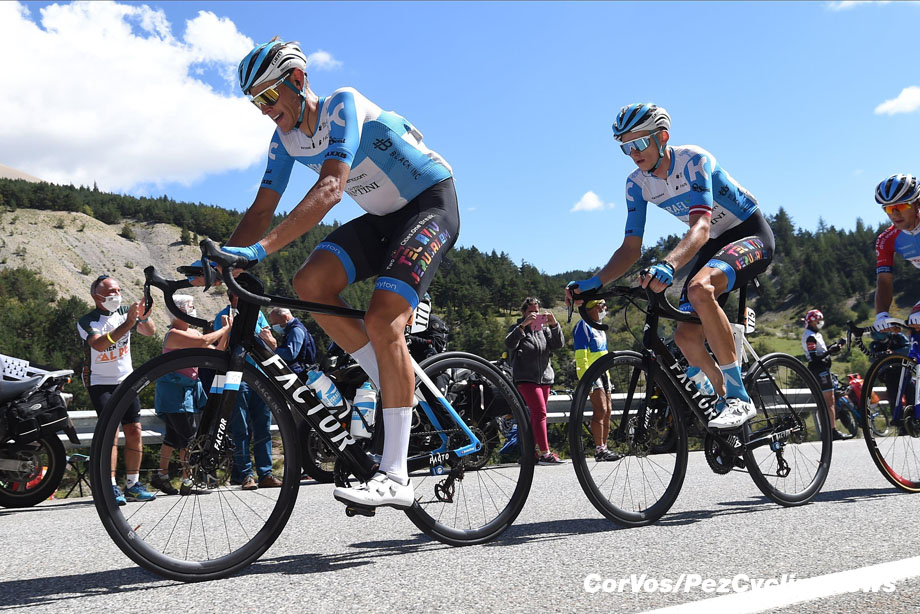 The break held out for a long time

Alaphilippe signalled to Bob Jungels to keep the pace high, which the Luxembourger did. The favourites for the overall victory kept quiet and so it was up to Pierre Rolland to open the action. The experienced Frenchman was not given much space and was soon swallowed up by Mikel Nieve, who led for Adam Yates. 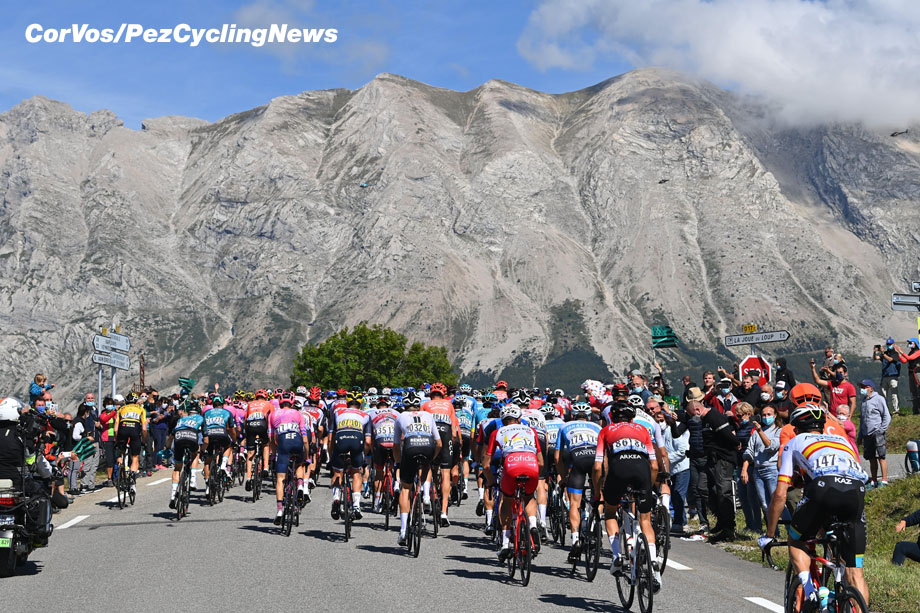 The finish is up there

With less than 4 kilometres to go, Nieve was replaced Wout van Aert. The Belgian Classic specialist decided to increase the pace even further for his leaders Tom Dumoulin and Primoz Roglič. Several riders had to let go under the pressure of Van Aert, but we still started the last 2 kilometres with a fairly large group of about forty men. 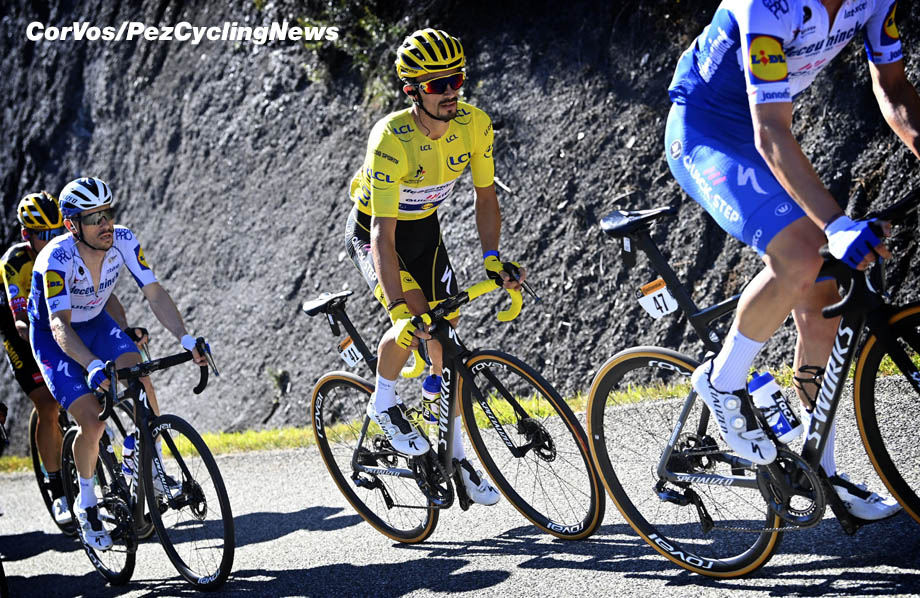 The yellow jersey was comfortable in the peloton

A fantastic Van Aert managed to keep up his effort for a very long time, but one and a half kilometres from the top, Van Aert pulled over and it was the turn of his teammate Sepp Kuss. The American climber set the scene for Roglic, who was glued to his wheel. The Slovenian turned out to be the strongest in the final sprint, ahead of his younger compatriot Pogačar and Guillaume Martin. 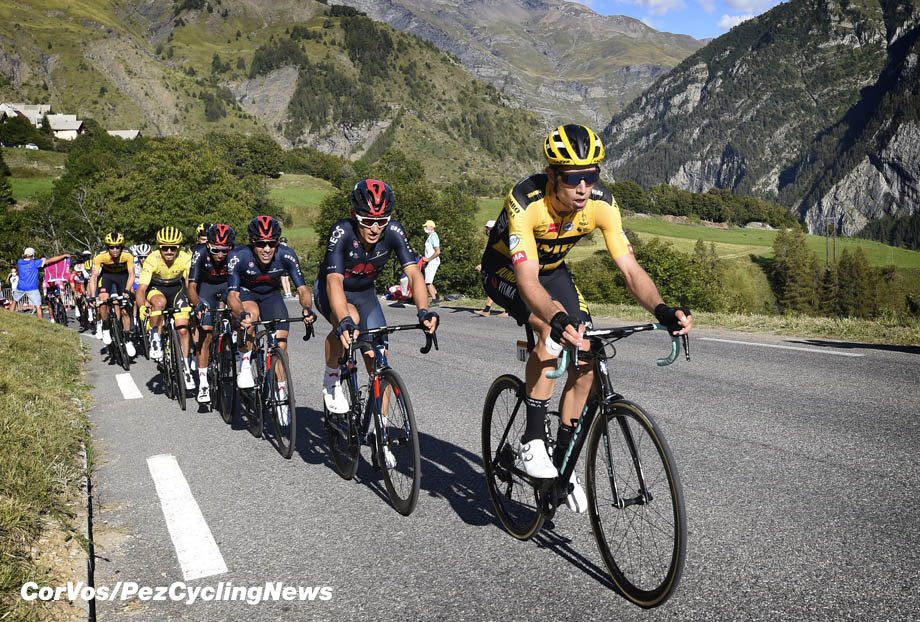 The other favourites finished in the wake of stage winner Roglic. Tom Dumoulin had a hard time on the final climb, but in the end did not lose any time. Alaphilippe didn’t manage to pass Roglic in the last meters and was passed by Martin and Quintana on the line, but will race tomorrow in the yellow jersey. 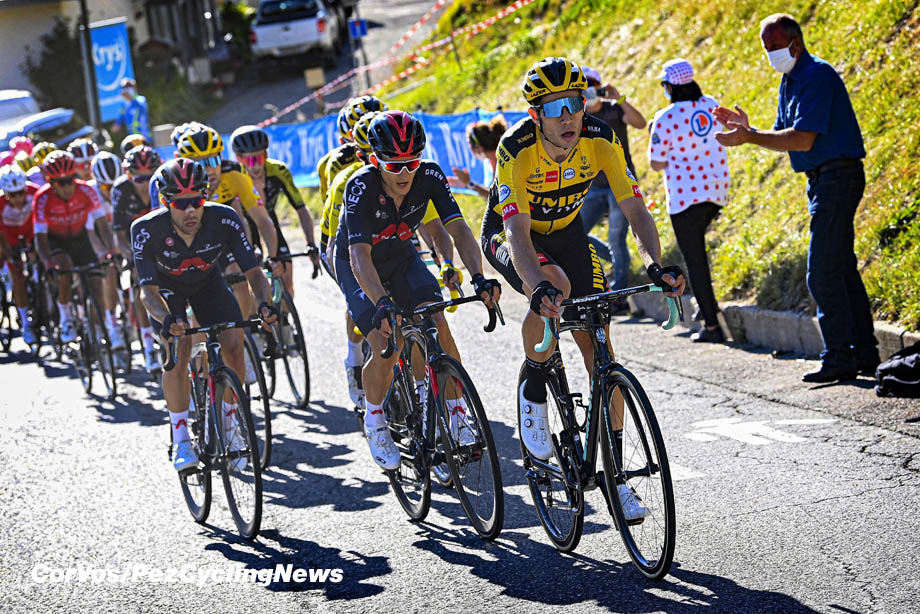 Ineos were not far away

Stage winner and 3rd overall, Primoz Roglic (Jumbo-Visma): “The boys did a very good job, again. It was a very fast day, very hot too. I was in a good position all the time and I was able to do a good sprint at the end. It’s a beautiful day, we stayed safe and we won! That is even better. We have to continue like this! I’m still on the way back. I feel good, can race and I feel better every day. I already received confirmation on the second day that I am ready to participate.” 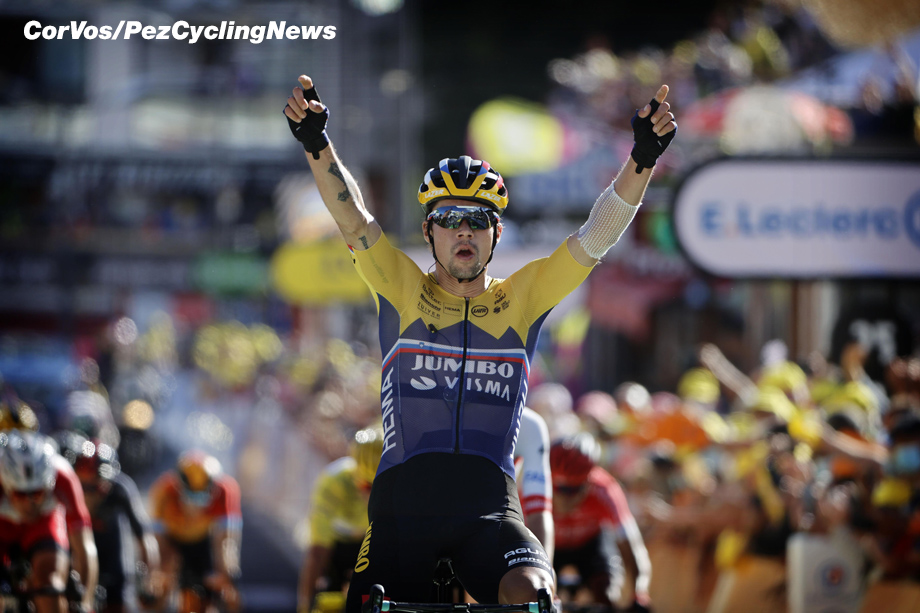 More to come from Roglič

5th on the stage and overall leader, Julian Alaphilippe (Deceuninck – Quick-Step): “I had the double goal to retain the yellow jersey and to win the stage. It would have been special to win a second stage. I have no regret because the team perfectly executed the plan, I gave it all and I’ve been beaten by stronger than me. Moreover, I’m happy with my shape even though it’s hard to compare with last year. We won’t be able to keep that rhythm for three weeks. Soon it won’t be up to us to control the race.”

# Stay PEZ for the Tour everyday. #