Stage Report: The sixth stage of the Tour de France saw Alexey Lutsenko (Astana) solo to the finish on Mont Aigoual. The Kazakh champion was part of the early break and he turned out to be the strongest rider on the stiff final climb of the Col de la Lusette. The favourites for the GC held back, except Julian Alaphilippe (Deceuninck – Quick-Step) who made a last metre attack. Adam Yates (Mitchelton-Scott) remains overall leader. 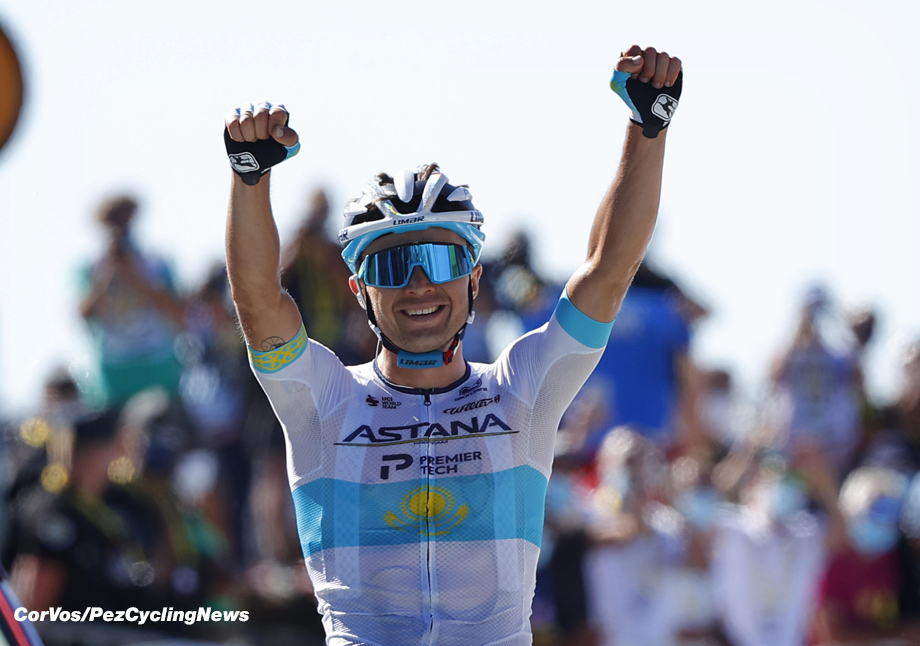 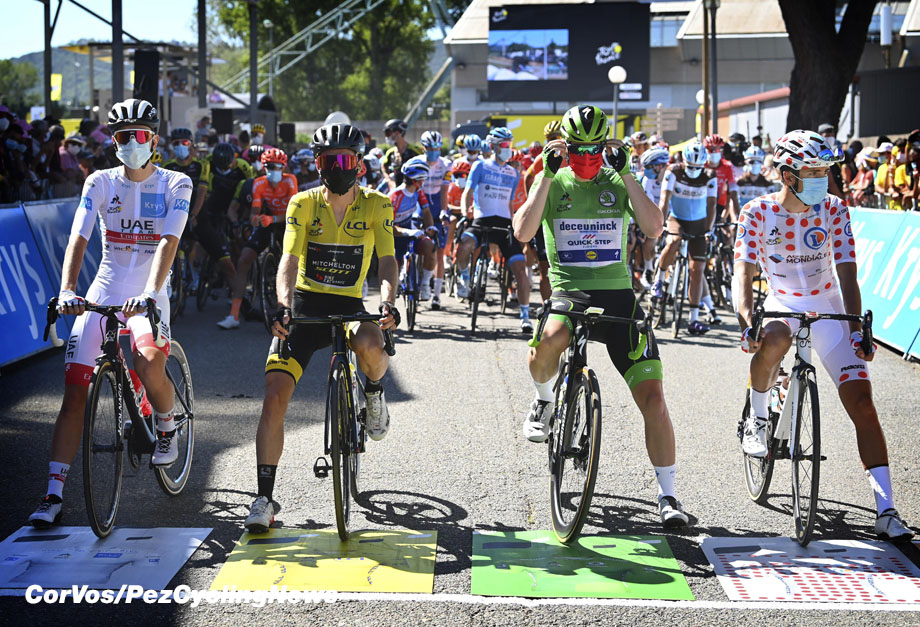 Stage 6 Route:
Tour director, Christian Prudhomme describes the stage: “The finish at the Mont Aigoual will be situated on a vast “plateau” on the borders of the Gard and Lozère departments, The steepness of the road to reach it will give the day quite some excitement especially after taking on the climb to the Col de la Lusette after leaving Le Vigan. At the summit, around 15 kilometres will still have to be covered to the get to the finish line. A day when the favourites will have to remain extra focused.” 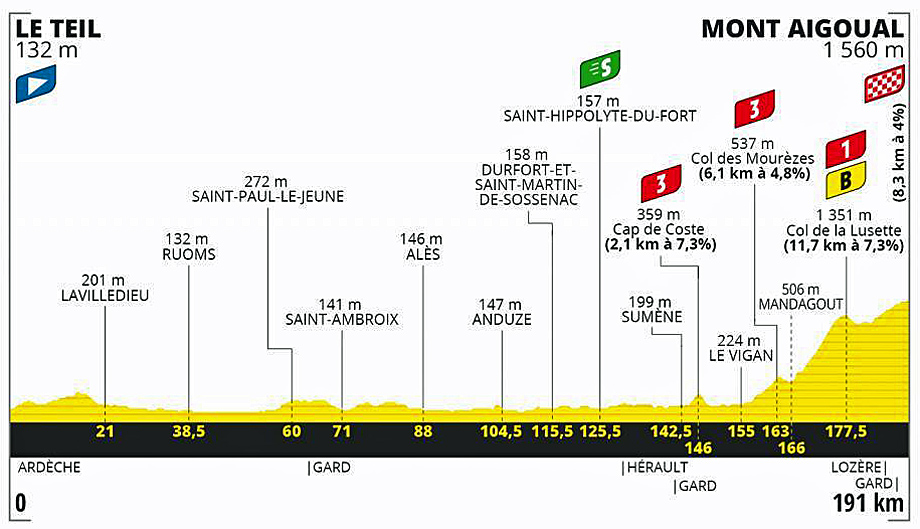 The riders opted for a semi-rest day on Wednesday, but today the race would be decided by a race long escape. Thomas De Gendt and Ben Hermans were the first to make a move, but were not part of the break. The peloton did its best to pull back the front runners, but after 15 kilometres the peloton let the attackers go. 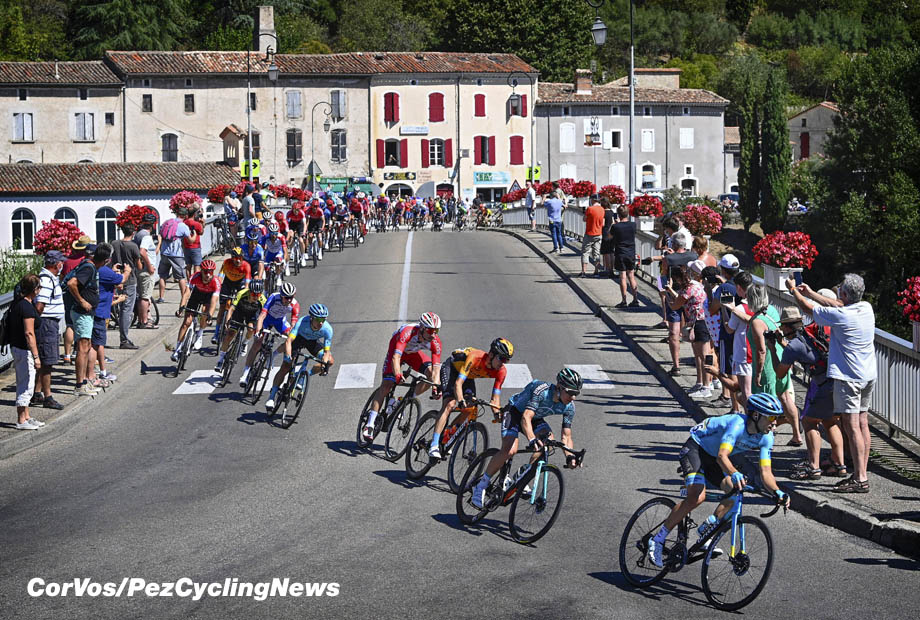 Another nice day for racing

Greg Van Avermaet, Neilson Powless, Alexey Lutsenko, Rémi Cavagna, Nicolas Roche, Edvald Boasson Hagen, Jesús Herrada and Daniel Oss made the split. For Powless it was a double celebration as it was his 24th birthday today. The lead for the eight quickly grew to 6 minutes. 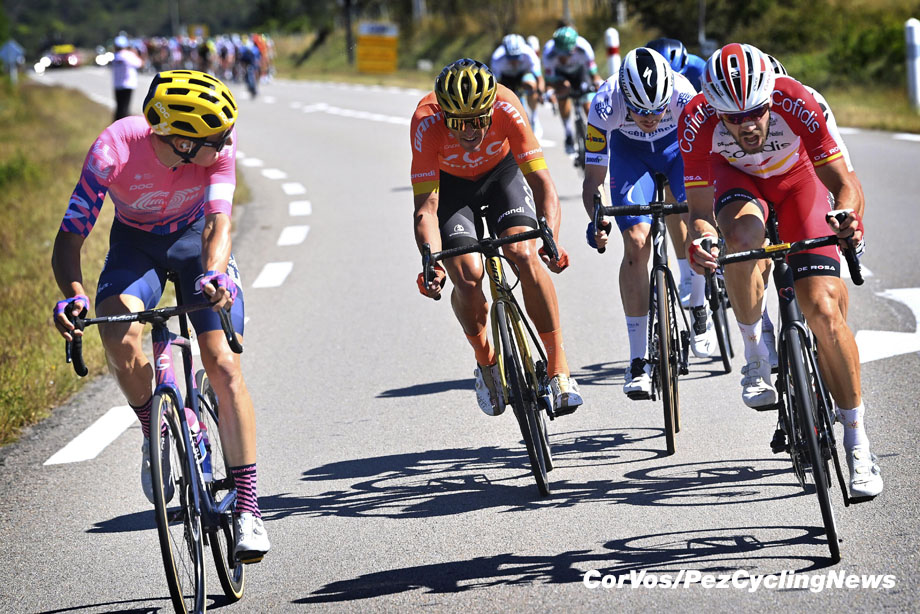 In the peloton; Mitchelton-Scott took the lead for Adam Yates, the new wearer of the yellow jersey, the lead continued to fluctuate around 6 minutes and the eight leaders continued to work well together. At the intermediate sprint in Saint-Hippolyte-du-Fort, Boasson Hagen took full points ahead of Oss and Van Avermaet. 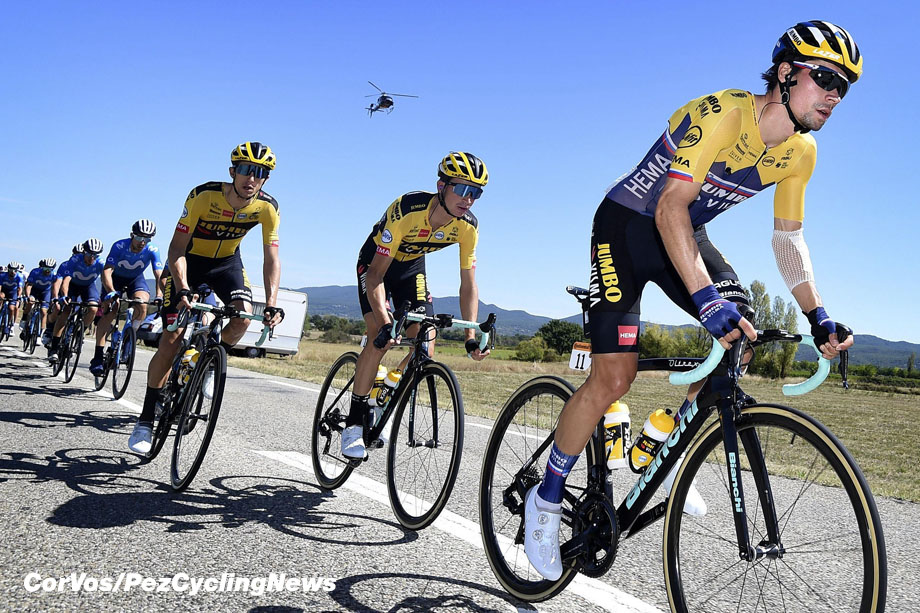 Another summit finish for Roglič

In the peloton, Sam Bennett took 6 points ahead of Peter Sagan, who had to settle for 3 points. Up at the front, the eight had less than 60 kilometres to go and their lead was still 6 minutes. Mitchelton-Scott’s workhorses were in no hurry at the head of the pack. 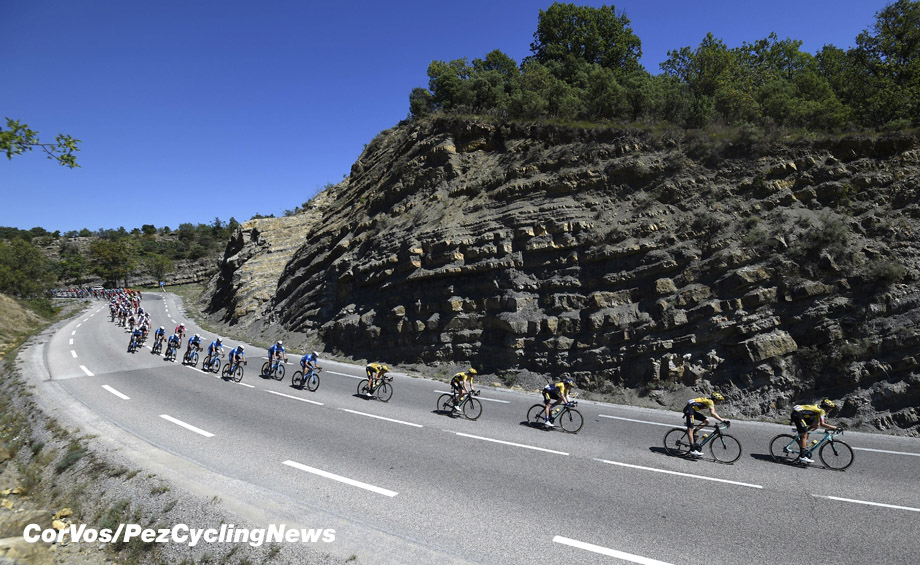 The peloton kept the break to around 3 minutes, with a max of 6

The first riders started to climb the Cap de Coste (2.1 km at 7.3%) 48 kilometres from the finish. Roche managed to grab 2 points at the top and Van Avermaet 1 point for the mountain classification. In the peloton the Jumbo-Visma team came forward, slowly increasing the pace and the sprinters, such as green jersey wearer Bennett, had to let go. 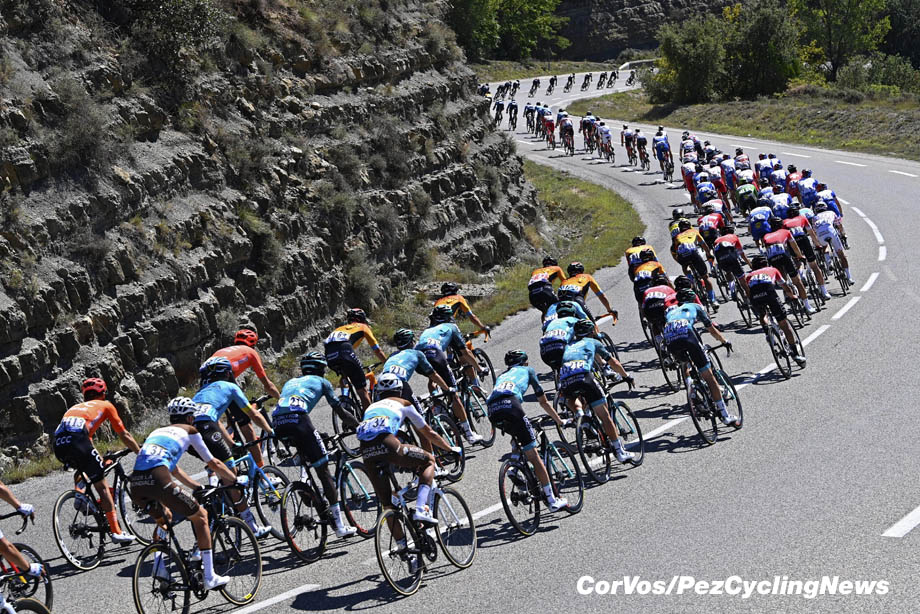 A much faster day than stage 5

The classification riders were nervous on the run-up to the Col de la Lusette and on the descent of the Cap de Coste, Enric Mas crashed. Movistar’s leader had to be brought back by his teammates, they succeeded but only after a hard chase. Meantime, the lead had dropped to 4 minutes, with three more climbs over almost 40 kilometres. 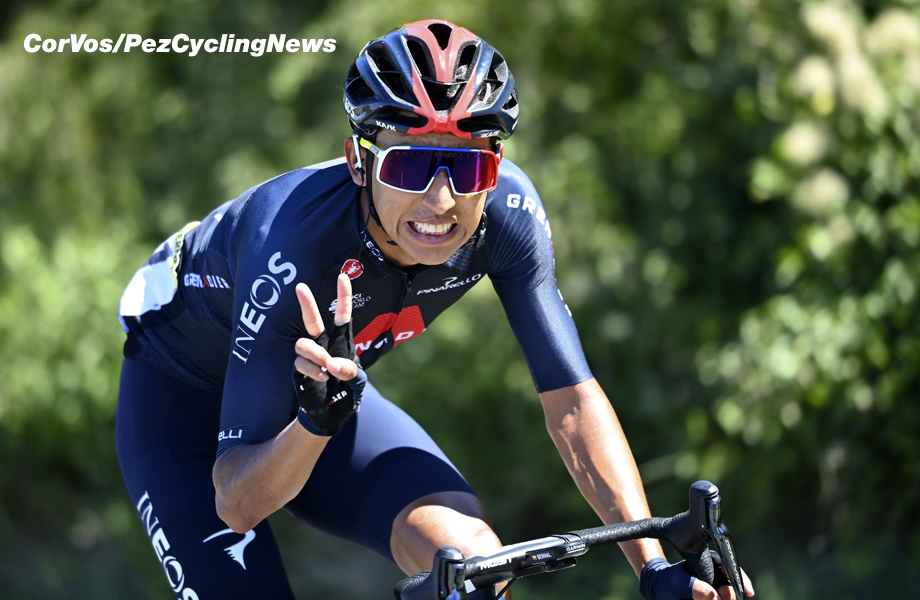 Is that a forced smile from Bernal

First the riders were faced with the Col de Mourèzes (6.1 km at 4.8%) Cat 3. This turned out to be the moment for the INEOS Grenadiers men to take control of the race and step up the pace. Egan Bernal’s teammates were back to their usual position, but the British squad could not do much damage. It was mainly a question of waiting for the steep ramps of the Lusette. 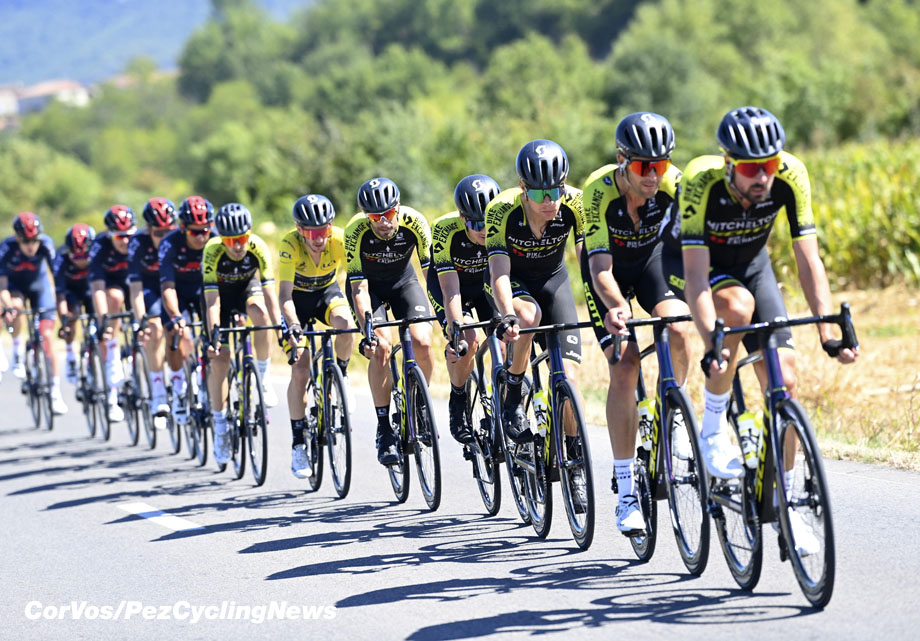 Mitchelton-Scott were in control of the peloton at first

Powless demonstrated his good legs on the Col de la Lusette. The American accelerated several times, but failed to lose Van Avermaet, Roche and Lutsenko from his wheel. Herrada also succeeded in hanging on. In the chasing group Dylan van Baarle set the pace, but everyone was waiting for the real fireworks. 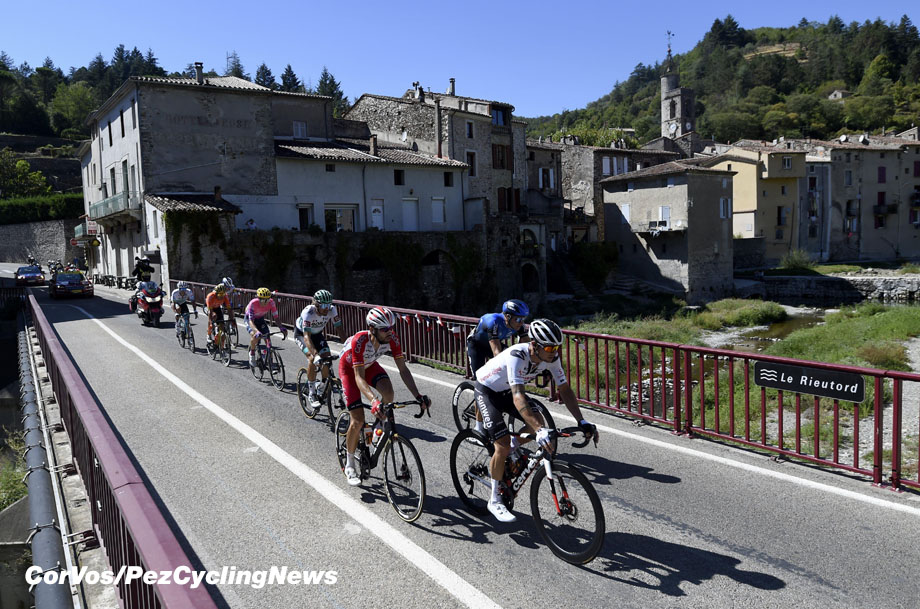 The break put up a strong fight

It clearly wasn’t going fast enough for Fabio Aru, who is trying to get back on track after a period of injuries and illness. The UAE Team Emirates Italian, five years ago winner of the Vuelta, quickly managed to take a gap. The favourites for the overall victory took full advantage of the work of INEOS Grenadiers, which also played into the hands of the escapees. They still had a lead of a good 3 minutes. 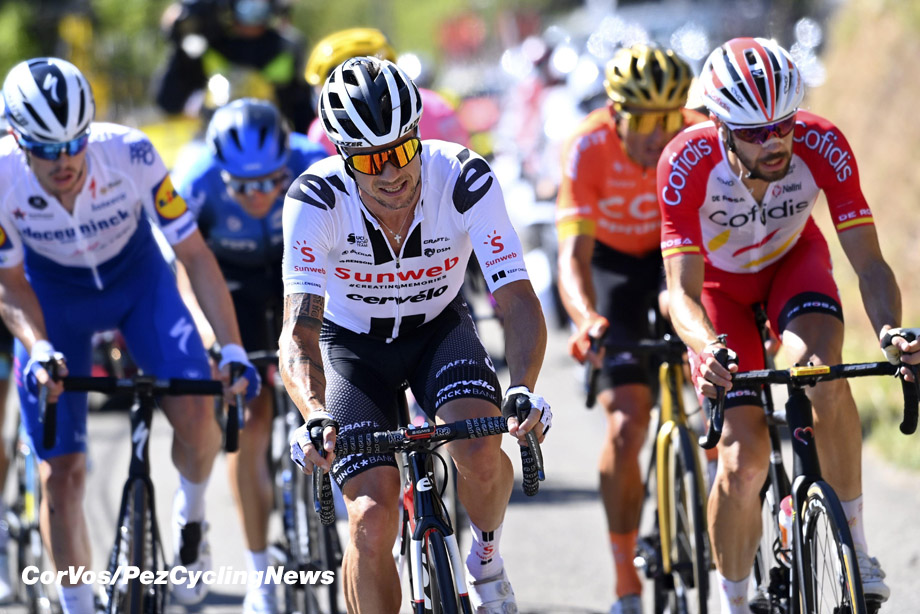 Could the break go all the way? 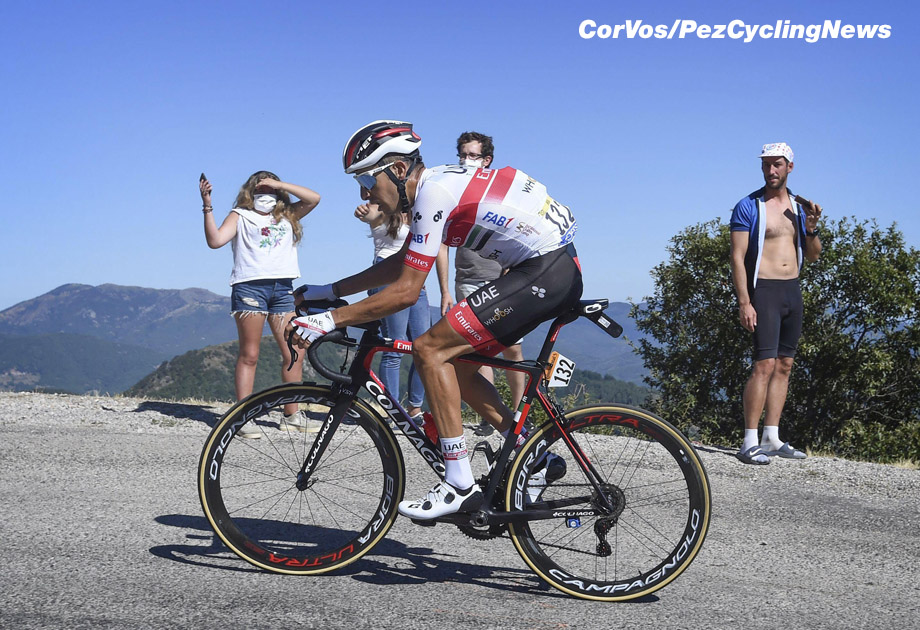 Three minutes turned out to be enough for the break to stay out of the grip of the classification riders. Up front, Powless seemed to have the strongest legs. The young EF Pro Cycling rider put on the pressure and managed to drop Van Avermaet and Roche, but the tough and Lutsenko stuck to the wheels. Four kilometres from the summit, Lutsenko rode away from Powless, who had blown up. 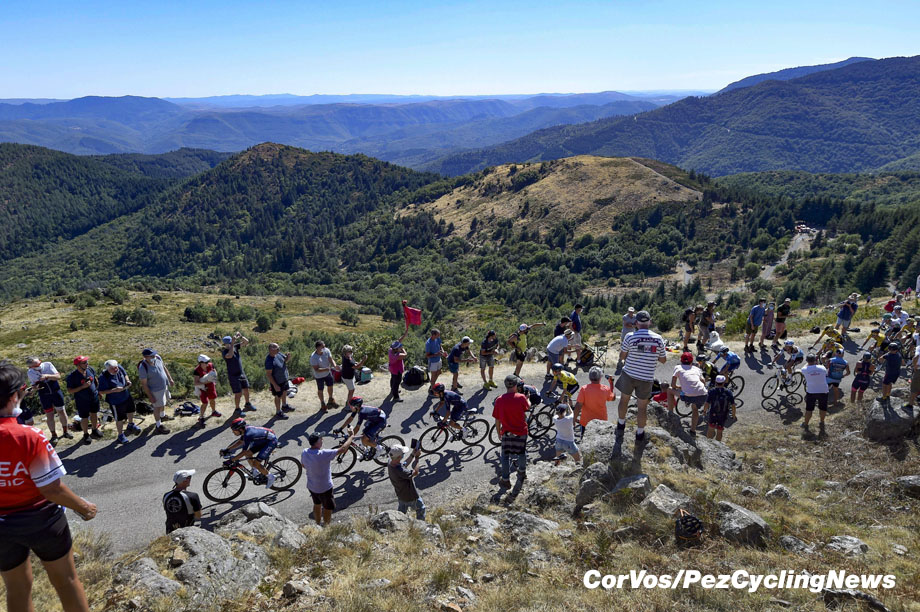 It wasn’t the peloton’s day

Powless was caught before the top and left by Herrada, who was still on the hunting for the now solo Lutsenko. The Astana rider was setting a great tempo and Herrada was stuck at 20 seconds. On the downhill kilometres towards the Mont Aigoual, Lutsenko managed to stretch his lead even further and he started the final climb with a 30 second lead. 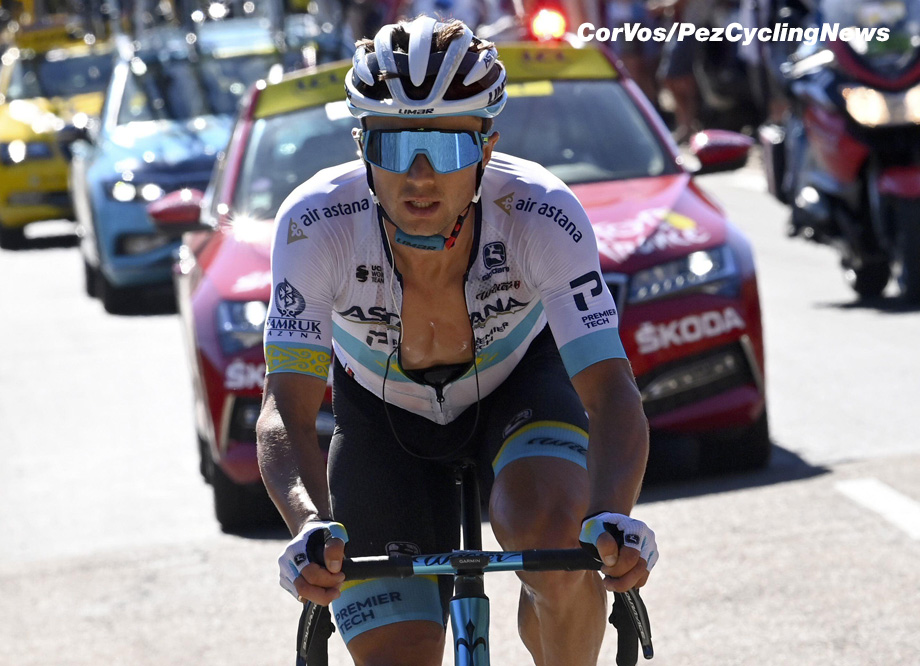 Herrada gave everything to close the gap, but lost even more ground on Mont Aigoual. Lutsenko knew he would be victorious with a few kilometres to go and crossed the line after a great solo performance. Herrada was a minute later and Van Avermaet beat Powless in the sprint for third place. The top men were led in by Julian Alaphilippe, 3 minutes behind the winner of the day. 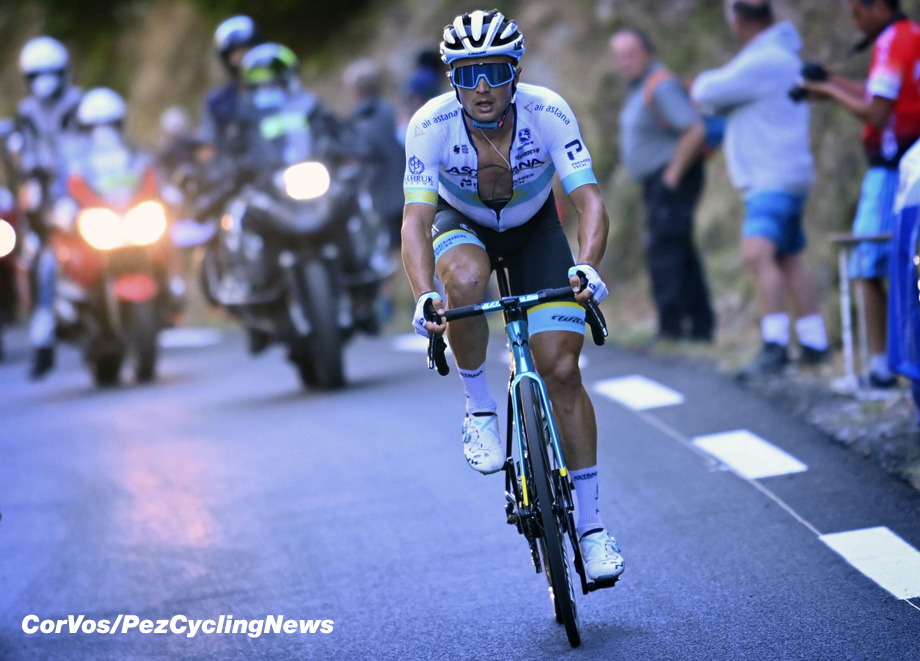 A hard finish for a hard rider

Stage winner, Alexey Lutsenko (Astana): “This victory is very important for me. This is the Tour de France, the most important race in the world. I’m very happy. I’ve worked so hard to get this victory. All this work has paid off. Today we talked before the start, at the bus, with our DSs and our manager Alexandre Vinokourov… Since I had lost quite some time in previous stages, I had the chance to go in the breakaway. I did my best on the last climb to win. I never actually get dropped – I just kept a steady pace. The team car was telling us on the radio there were two very hard kilometres at the second part of the climb, so I rode my tempo and gave it all at those to create a gap big enough to win.” 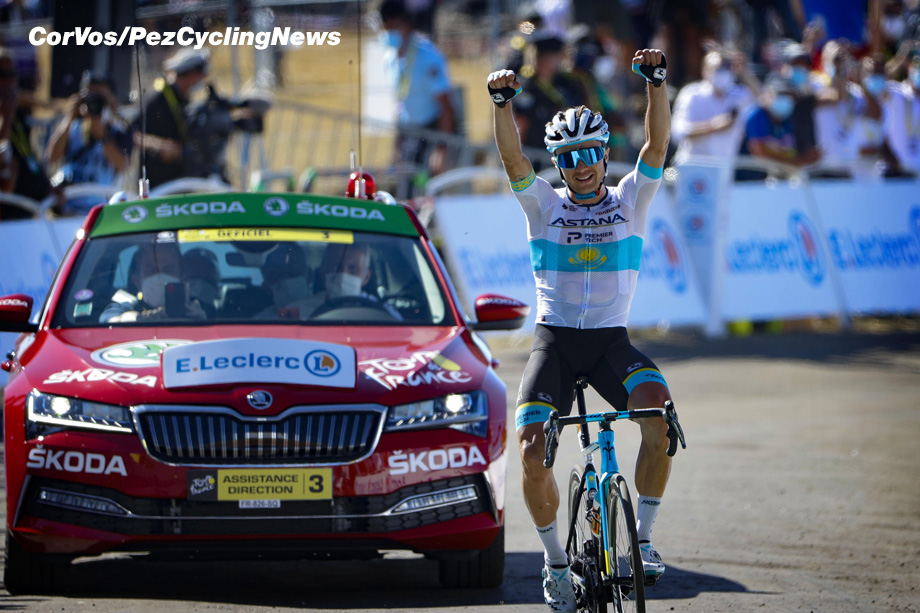 Overall leader, Adam Yates (Mitchelton-Scott): “At the start, a big group went up the road. None of them was dangerous so it was about controlling the gap and keeping it as easy as possible. The final climb wasn’t too hard, it was difficult to make a gap there, and therefore attacking would have been a huge effort for a small gain. So we rode steady to save energy for the coming days. I felt pretty good today. I watched the race back when I was a kid, everyone likes to be leader of the Tour de France. It was a delight to wear yellow. Hopefully I’ll keep for a few more days. Let’s first see how it goes tomorrow.”