Stage Report: Stage 7 was a day of cross-winds and losses for those who missed the important echelons. One man who made sure he was to the fore was Wout Van Aert (Jumbo-Visma) and then the man on form made sure of the sprint win. Adam Yates (Mitchelton-Scott) finished 9th on the stage and held the overall lead. A group with Tadej Pogacar, Bauke Mollema and Mikel Landa lost almost a minute and a half. 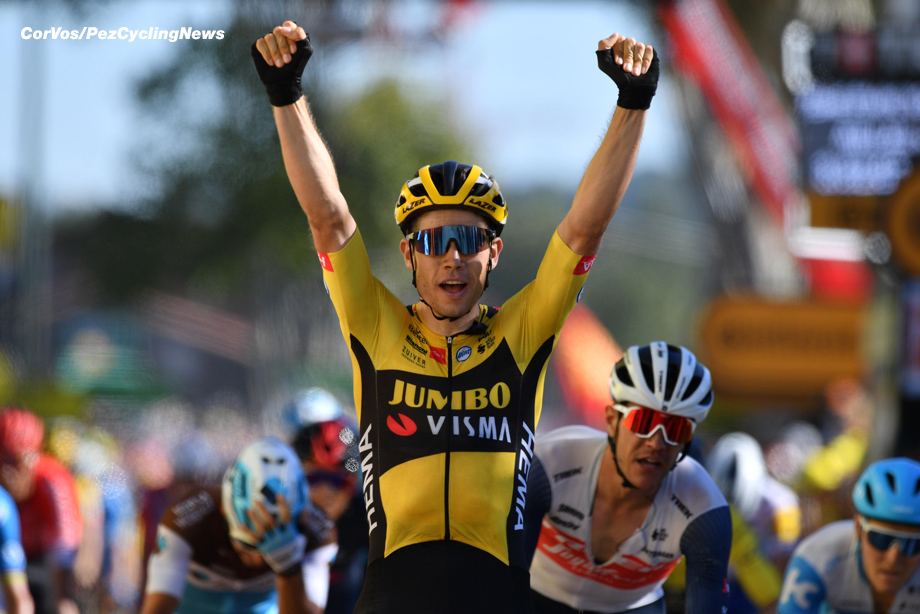 A perfect sprint from Van Aert 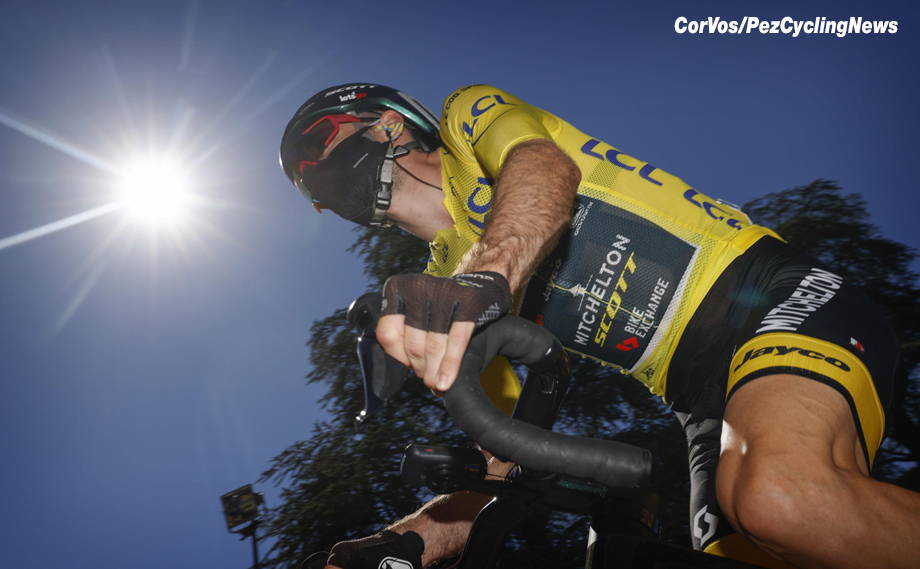 Another day in yellow for Adam Yates

Stage 7 Route:
Tour director, Christian Prudhomme describes the stage: “In the areas of Aveyron and Tarn where one doesn’t quite know what “flat” means, the roads are never easy. Other than the hilly course, before visiting Castres, the plans of the sprinters’ teams could be troubled by the wind that can be very strong in the region.” 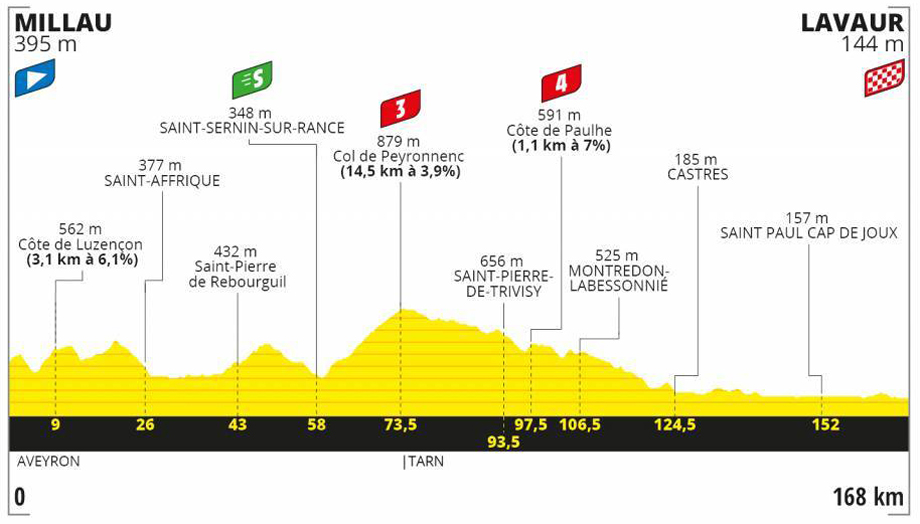 The pre-predicted wind had an effect on the race from the first kilometre. On the first climb of the day, after 9 kilometres, Peter Sagan’s BORA-hansgrohe team split the peloton. Almost all sprinters were dropped on the Côte de Luzençon, not just because of the climb, but also due to the high pace and the cross-wind. 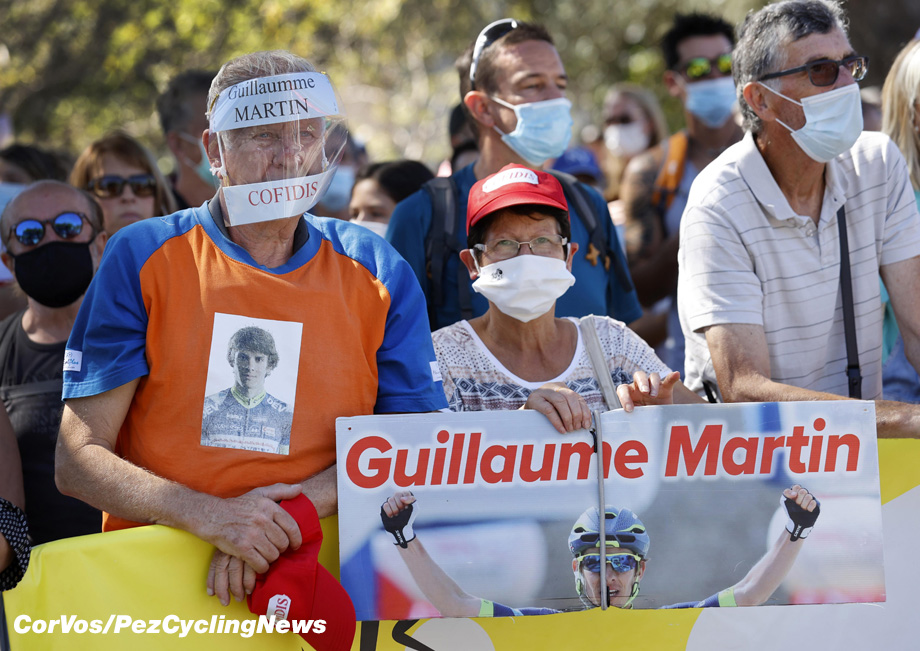 The Guillaume Martin fans were out

A peloton of 70 rider, led by BORA-hansgrohe, managed to take 2 minutes from a group with green jersey Sam Bennett (Sagan’s main competitor), as another group with Caleb Ewan, Cees Bol, Alexander Kristoff and Mads Pedersen lost more than three minutes. Those differences continued to increase. 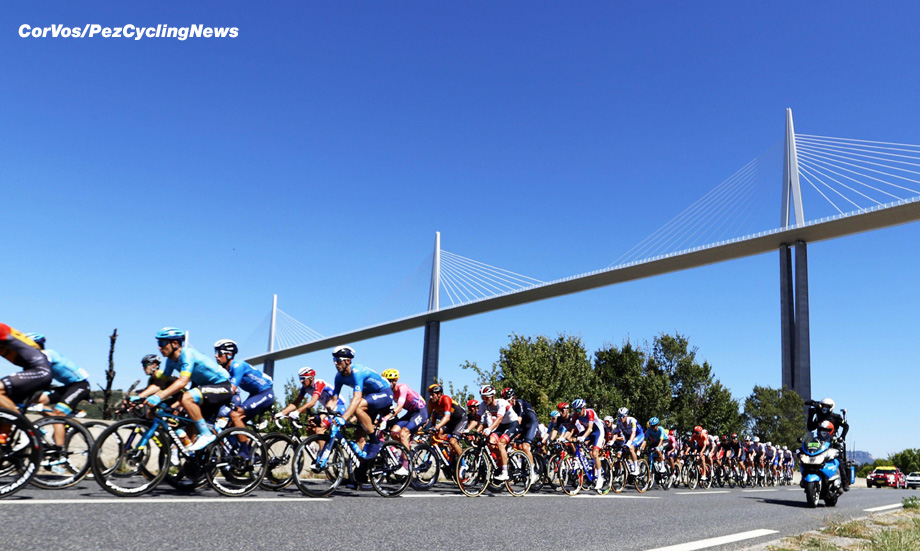 The peloton passing under the Millau Viaduct 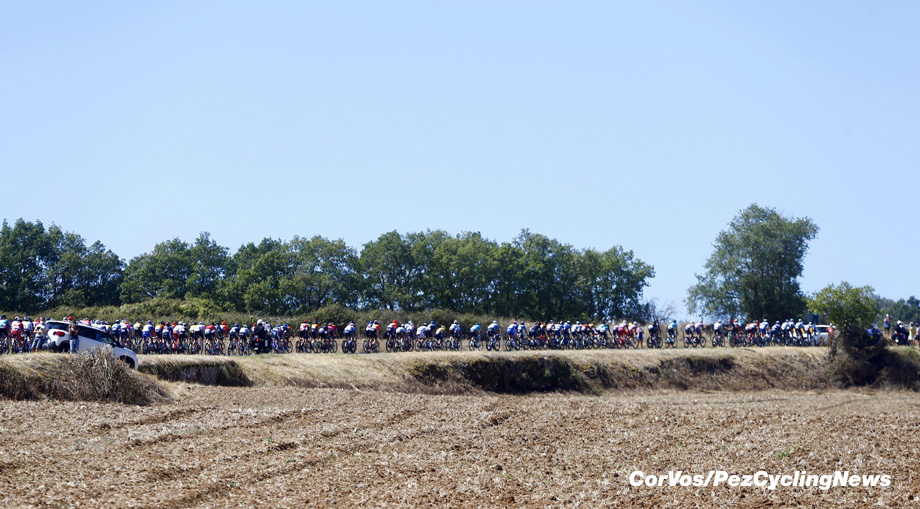 A day of action

After 58 kilometres, at the intermediate sprint of the day, Sagan was narrowly beaten by Matteo Trentin (CCC). But the Slovak took over the green jersey from Bennett with his second place. After the sprint, BORA-hansgrohe didn’t ease off and on the Cat 3 Col de Peyronnenc they kept the pace high. The Bennett group and the Bol/Ewan groups lost even more time. 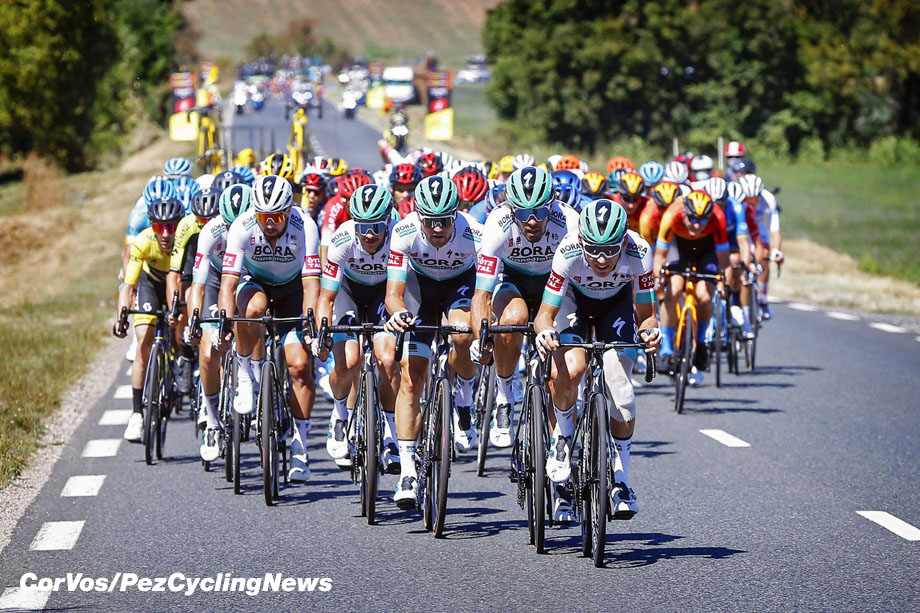 BORA-hansgrohe looking for a split 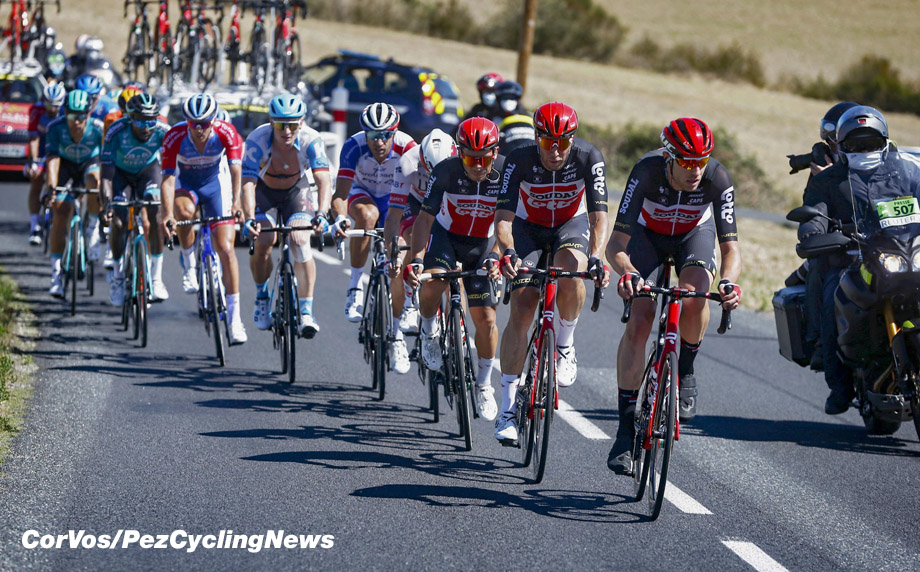 Lotto Soudal wanted to be in the move

Just before the top of the Peyronnenc, Thomas De Gendt escaped from the peloton. He managed a slim lead of 30 seconds and BORA-hansgrohe and B&B Hotels-Vital Concept led the chase. For a long time De Gendt’s lead fluctuated between 30 and 50 seconds, but with the town of Castres approaching, the nervousness in the peloton increased and the gap was closed. 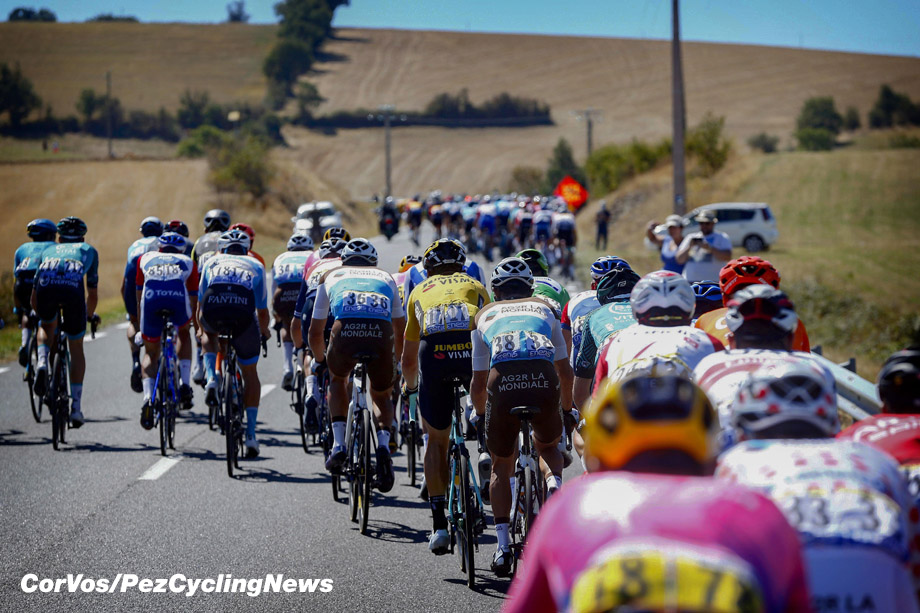 Echelons were the order of the day 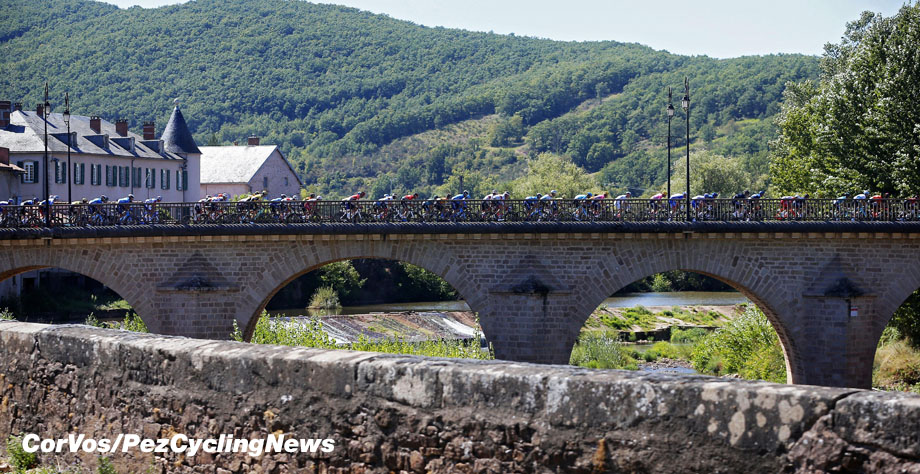 After passing through Castres, 45 kilometres from the line, the road turned so that the wind was again slicing across the race. INEOS Grenadiers immediately split the pack into three echelons. Among the victims were Tadej Pogacar, Mikel Landa, Richie Porte, Bauke Mollema and Esteban Chaves. The two chase groups got together, but lost 45 seconds on the front echelon of 40 riders. 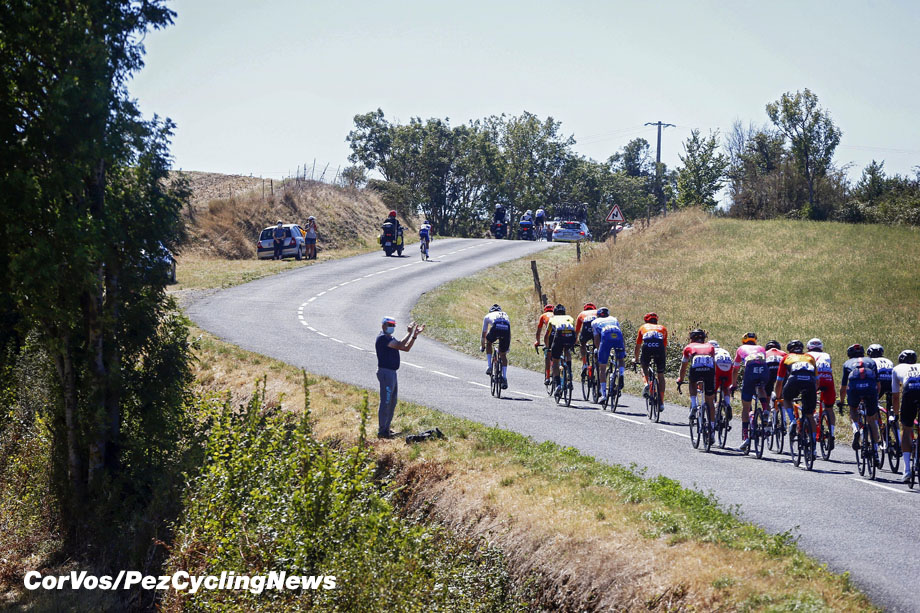 It was a day of chasing for many 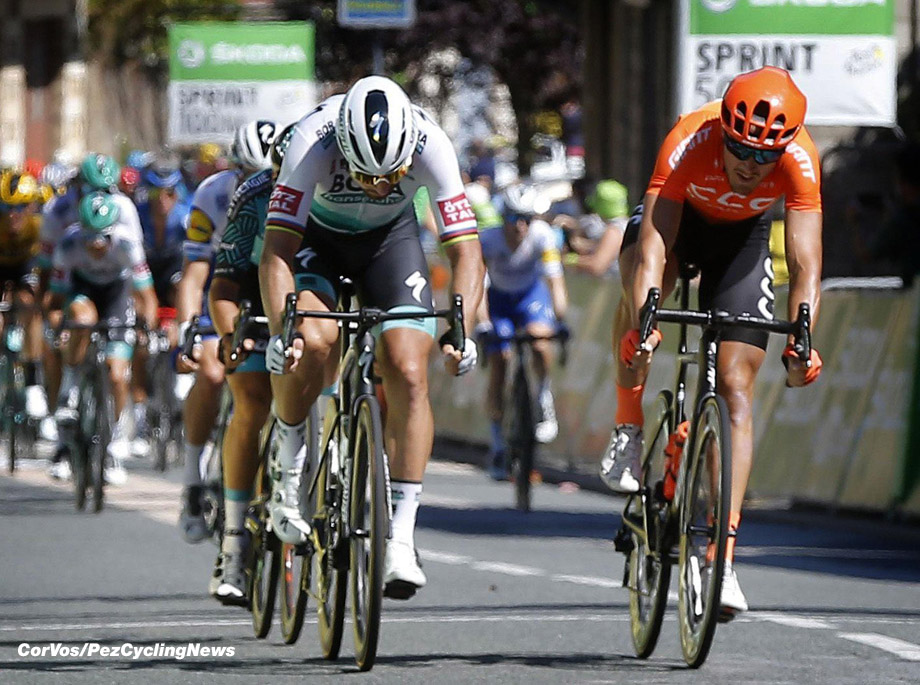 Sagan and Trentin were looking for intermediate sprint points

The gap between the front echelons remained around a minute for a long time. Richard Carapaz was in a good position, but had a puncture at a very bad moment and lost the contact. He ended up alone between the two echelons, despite help from Andrey Amador, and had to drop back into the second group. The difference with that group, with Pogacar and Mollema, fluctuated around 1:10. 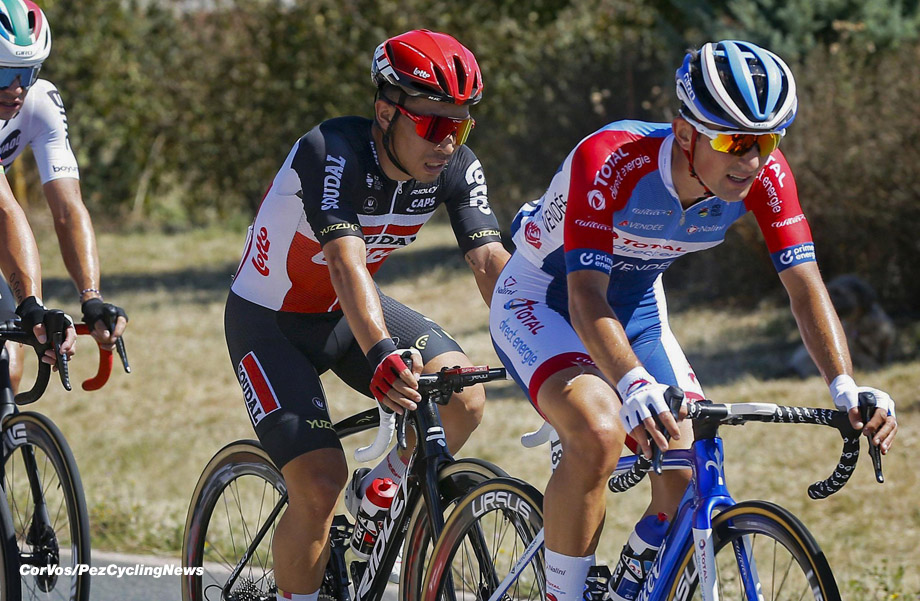 Caleb Ewan was in the back group 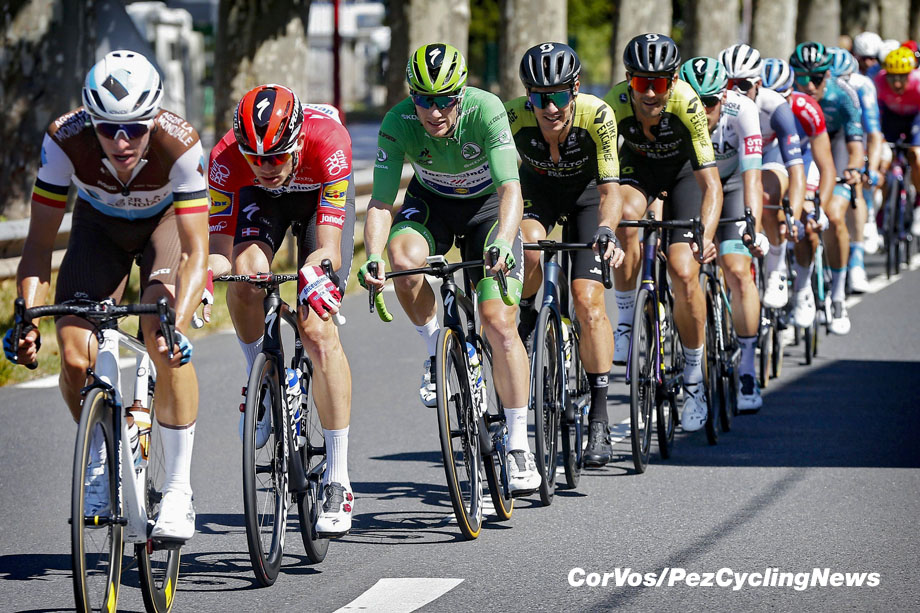 The green jersey of Bennett also missed the front group

In the final, all eyes were on the remaining fast men. Tom Dumoulin worked for Wout van Aert and Sagan, Coquard and Boasson Hagen also had their helpers, but in the final straight, Van Aert managed to claim his second stage victory of this Tour and his third all-time stage wins in the French Grand Tour. Peter Sagan completely messed up his sprint and finished 13th. 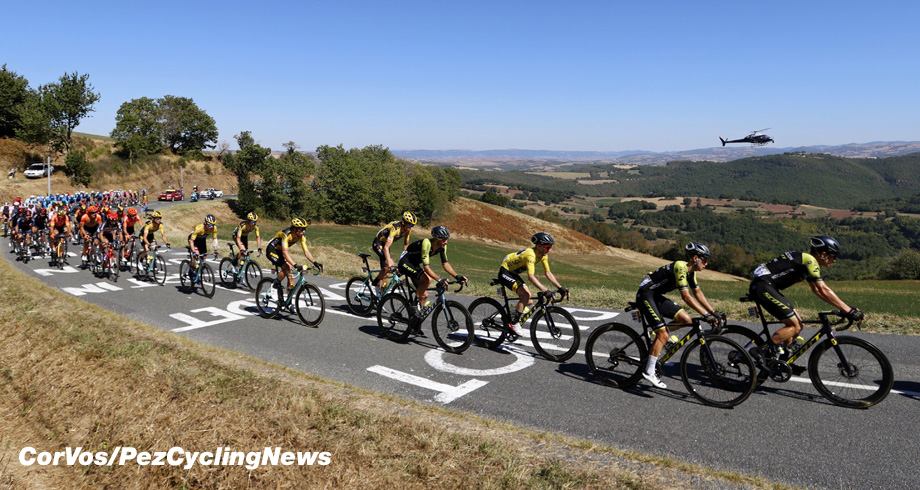 Adam Yates made the front group 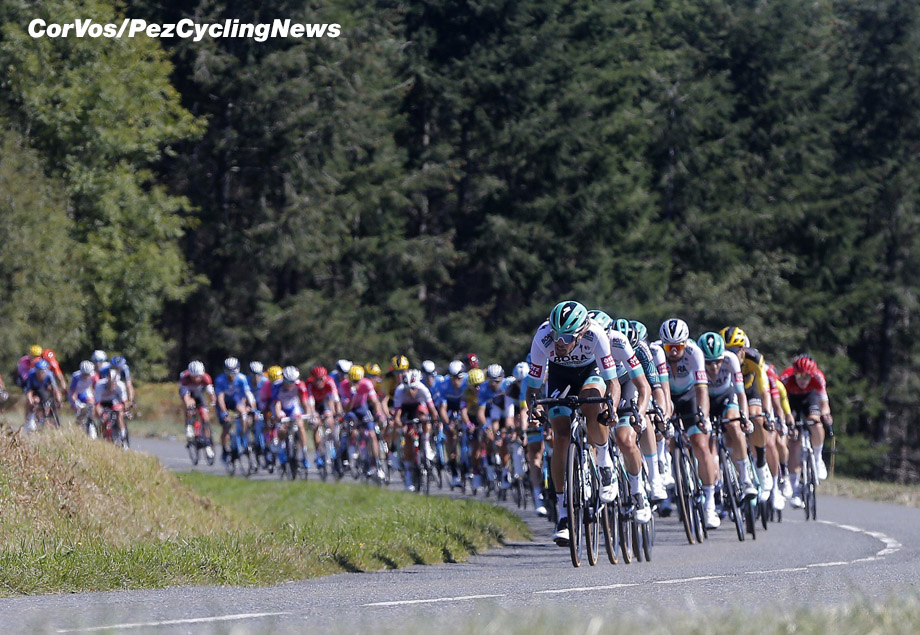 BORA-hansgrohe were looking for the stage win for Peter Sagan

The group with Pogacar, Carapaz, Mollema, Landa, Porte and Chaves crossed the finish line in Lavaur after 1:20. Adam Yates, who was in the front group, finished 9th on the day and kept the yellow jersey. Roglič remains second at 3 seconds and Guillaume Martin is now third, due to the time lost by Pogacar, 9 seconds behind Yates. 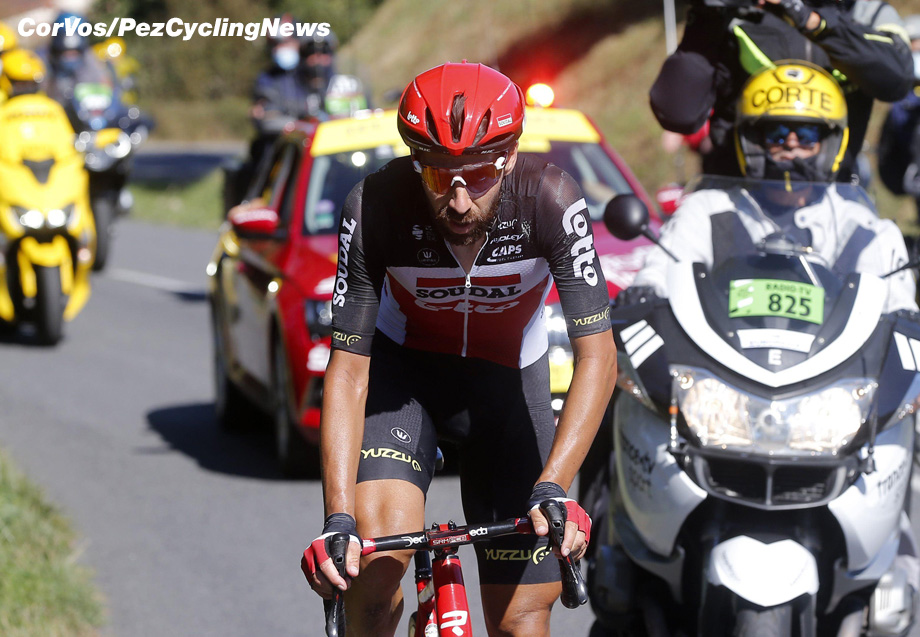 Stage winner, Wout Van Aert (Jumbo-Visma): “I’m really proud of this one. We rode flat out straight from the gun. It was an impressive ride from Bora-Hansgrohe from the first KOM. They made sure all sprinters got dropped. Everyone could feel the crosswinds during the race. I put all my energy in protecting Primoz [Roglic]. We had a good day at the front while some GC favourites lost time. It was an incredible finish. I actually only focused on Primoz, but it would have been a shame to not try to win the stage as well in a smaller bunch sprint. I found a gap on right hand side and I timed my sprint perfectly. It’s even more special than my win close to here last year because I didn’t expect this morning that I’d be competing for the victory. It’s more of a surprise today. Nobody expected such a hard race!” 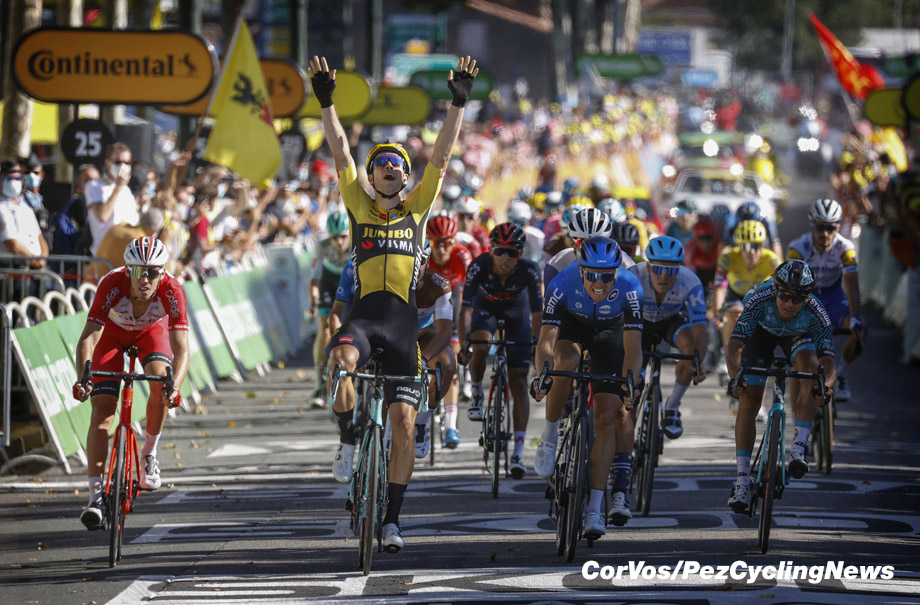 Overall leader, Adam Yates (Mitchelton-Scott): “We wanted a calm stage before the Pyrenees, but other teams had different ideas, especially Bora. They pulled from kilometre 0 until the very end. I’ve kept yellow, so it went well for me. I stayed out of trouble the whole day, although at the end the race was a bit hectic. I’ml looking forward to see what we can do tomorrow.”