Race Report: Marcel Kittel secured yet another sprint win in yet another flat stage of the Tour de France. He’s simply too good and with the quality of team he has around, there doesn’t seem to be any doubt that he’ll keep adding to his victories once we emerge from the Pyrenees. 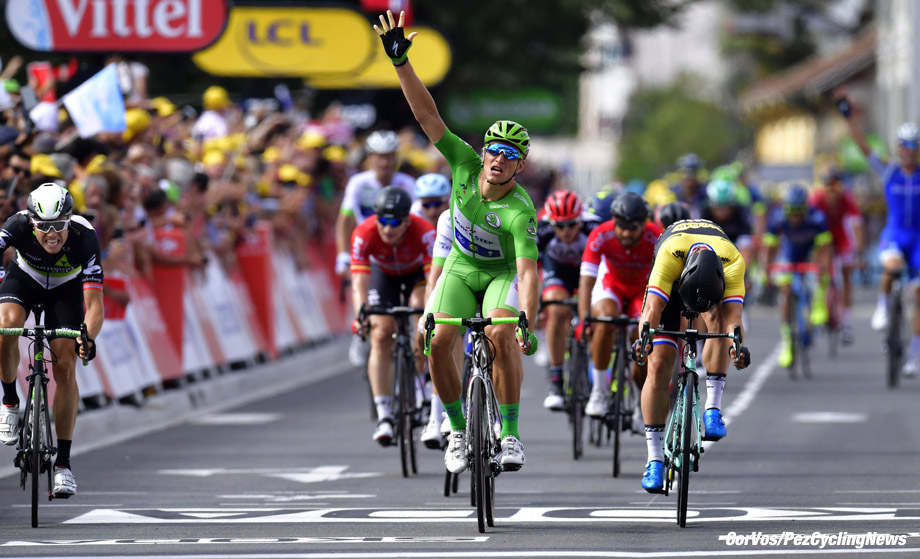 It was the last flat stage before the Pyrenees and the riders were treated to a long, but flat, ride from Eymet to Pau, in the south west of France. There was talk before the stage that the sprint teams might make it hard for Quick-Step Floors by getting men into a large break. That never materialized though and we were treated to a three man break of Marco Marcato, Maciej Bodnar and Frederik Backaert. They were never given much and with 28km to ride, Bodnar took off with the catch imminent and built a lead of just over a minute. It never grew to more than that but 27kms later he was still in the lead as an increasingly fraught peloton tried to bring him back. With 600m to go the dream ended and from that point it was all Quick-Step. Marcel Kittel was a long way back, but that was merely the head start that he could afford to give his rivals and he just turned on the afterburners to come around everyone else for yet another win. The sprinters now have a few days to work out how they can possibly end this run of dominance, at the moment it looks like making life hard for Kittel in the mountains is the only way to grab a win on the flat. 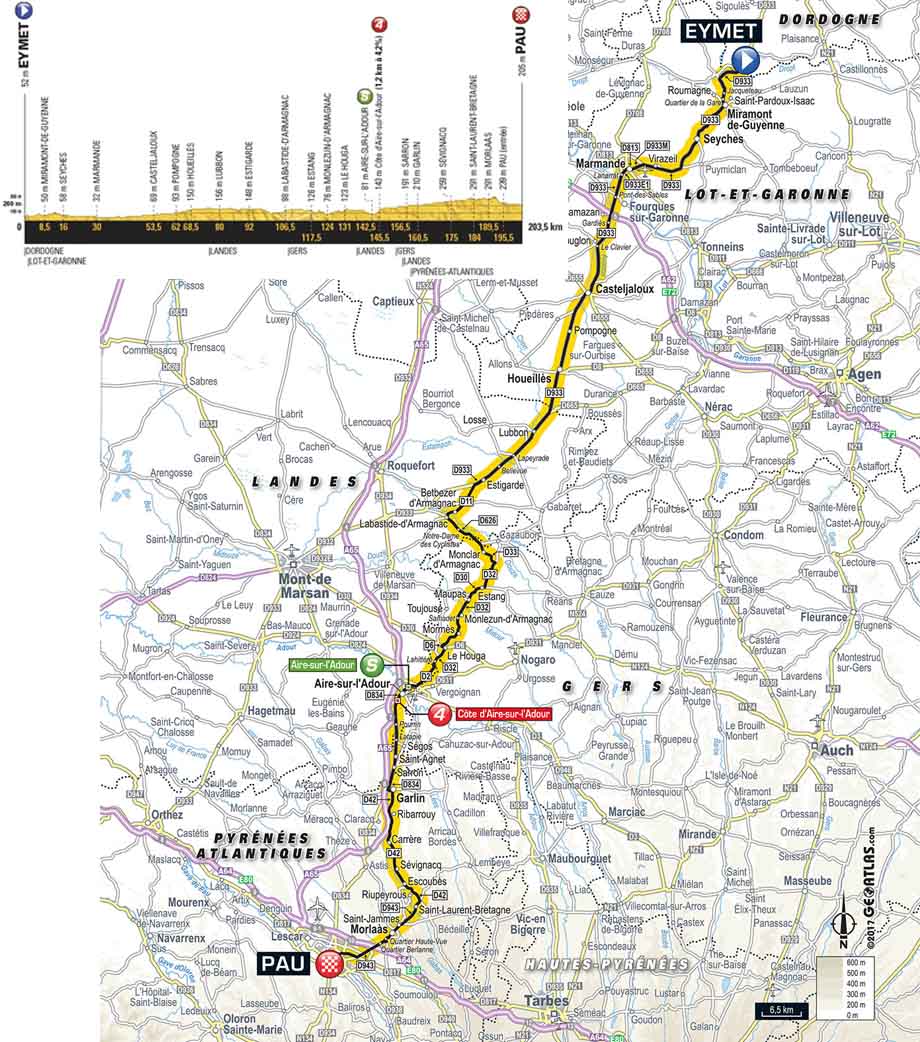 Route
This is the last sprint stage before the riders head into the Pyrenees. So far, with the exception of the fourth stage to Vittel, Marcel Kittel has won every sprint, dominantly. There’s nothing in this 203.5km slog from Eymet to Pau which suggests that anything will change. The riders start from Eymet, just a little to the south of yesterday’s finish in Bergerac. Bergerac, incidentally is also the name of a very good British detective series from the 80s and 90s – these are the great nuggets of info you get when faced with a long slog through the south of France in the second week of the Tour de France. Eymet is famous, if that’s the right word, for its high percentage of foreign nationals, about a third of local residents are ex-pats.

From there, it’s south east to Pau taking in the fourth category Cote d’Aire-sur-l’Adour (1.2km @ 4.6%). Interestingly, immediately after the climb, the route continues ascending to the high point of Morlaas which comes just 14km before the finish. Pau is twinned with the towns of Mobile in Alabama, and Swansea in Wales, around an hour west of the birthplaces of both Geraint Thomas and Luke Rowe. Basically, there’s not much happening on this stage, it’s flat. 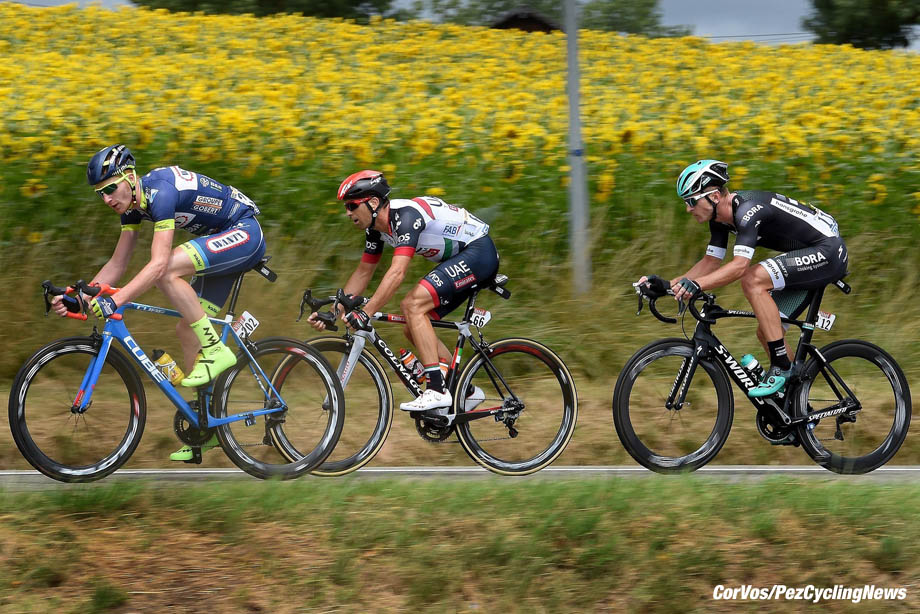 Quick Jump
The joy of these long stages is that there’s often a rush to get into the break and benefit from the increased TV time available. Not today though! The day’s three man break formed immediately, with Marco Marcato (UAE Team Emirates), Maciej Bodnar (Bora-Hansgrohe) and Frederik Backaert (Wanty-Groupe Goubert) going clear and quickly built a lead of over two minutes. This was a good enough group for the peloton and they let the lead stretch out beyond the five minute mark as they enjoyed an easy ride in the sun.
It’s a shame that Pierrick Fedrigo retired at the end of last season, he was born just south of the stage start and two of his four Tour de France victories took place in Pau (2010, 2012), his first win in 2006 was in Gap, but his second win in 2009 was in Tarbes, just down the road from today’s finish.

Lotto Soudal and Quick-Step Floors were both keen to stick a team mate on the front and keep the break vaguely under control but nobody was breaking their back after 50km of racing.

With just over 100km to go, the peloton had reduced to gap to less than two minutes, but they had no intention of bringing it all back together with so far left to ride. Instead, the average speed slowed even more as the peloton fed out a little more rope.

Finally after 100km, there was some drama, but not the kind we wanted. A crash through the feedzone had taken down Dario Cataldo (Astana) and John Degenkolb (Trek-Segafredo). The German had quickly remounted but the Italian had suffered a significant wrist injury and was out of the race. Obviously a large blow personally, but also a serious knock back for Fabio Aru and Jakob Fuglsang who would’ve been relying on their team mate for the mountain stages later in the week. 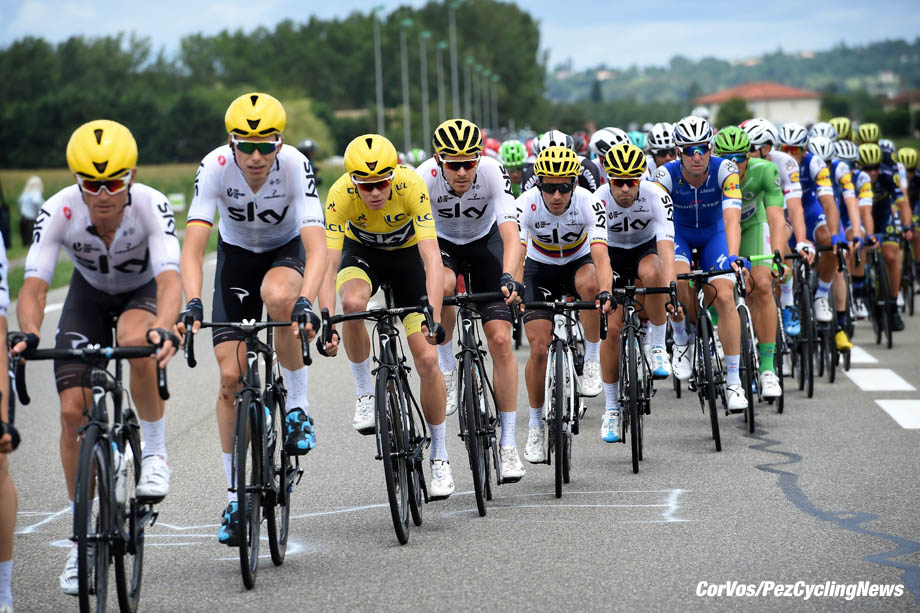 Green with Envy
The break took a 2:30 lead into the intermediate sprint and Marcato was the first man through. The real battle was further back though, Kittel was carrying a 102pt lead into this stage and he was happy to save his legs as Michael Matthews (Sunweb) and Alexander Kristoff (Katusha-Alpecin) battled for the points with Matthews just losing out to the Norwegian. Still, it was a handful of points hauled back in for Matthews, which may be all important come Paris.

Immediately after the sprint there was an attack from FDJ, but it coincided with a crash for Arthur Vichot (FDJ). Romain Bardet (AG2R-La Mondiale) was also involved, but he was shepherded back to the peloton without any issues or visible crash damage. The race moved back into its rhythm as Lotto-Soudal, Katusha-Alpecin, and, Quick-Step Floors threw men forward to keep the pace ticking over and drag the rest of the peloton towards Pau and the end of the stage. 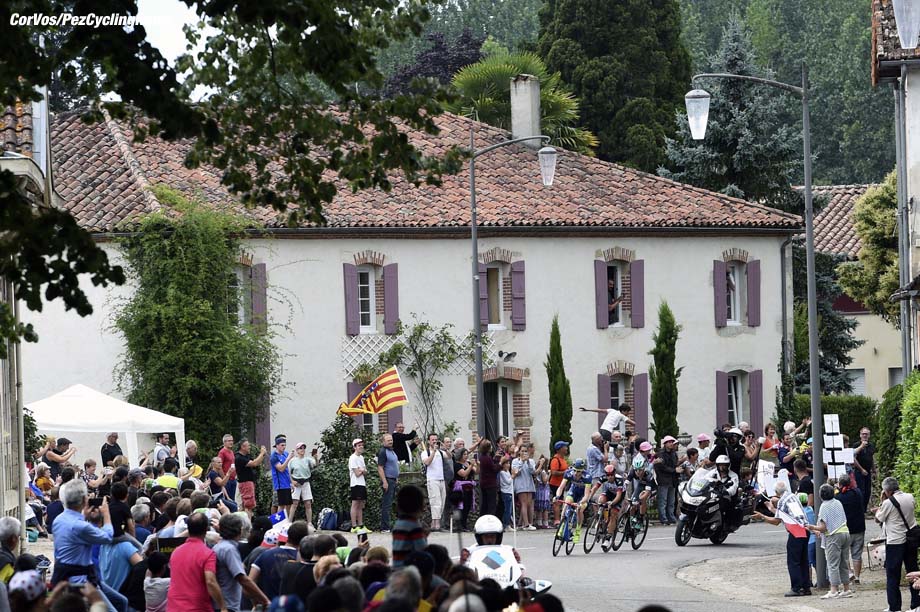 With 23km left to go and a gap of barely 30 seconds, it was time for anyone with good legs in the break to go for it. Bodnar took up the mantle and took off as his breakaway mates fell back into the bunch, their day ended early. The Pole was immediately able to pad his lead and took a minute advantage into the final 20km. After 180km where virtually nothing happened, it was coming thick and fast. Alberto Contador (Trek-Segafredo) hit more trouble as he crashed alongside team mate Michael Gogl. The 23-year-old Austrian was the worst affected and Contador was left to chase back onto the peloton in the company of last year’s hero Jarlinson Pantano (Trek-Segafredo), whilst Gogl limped to the line. 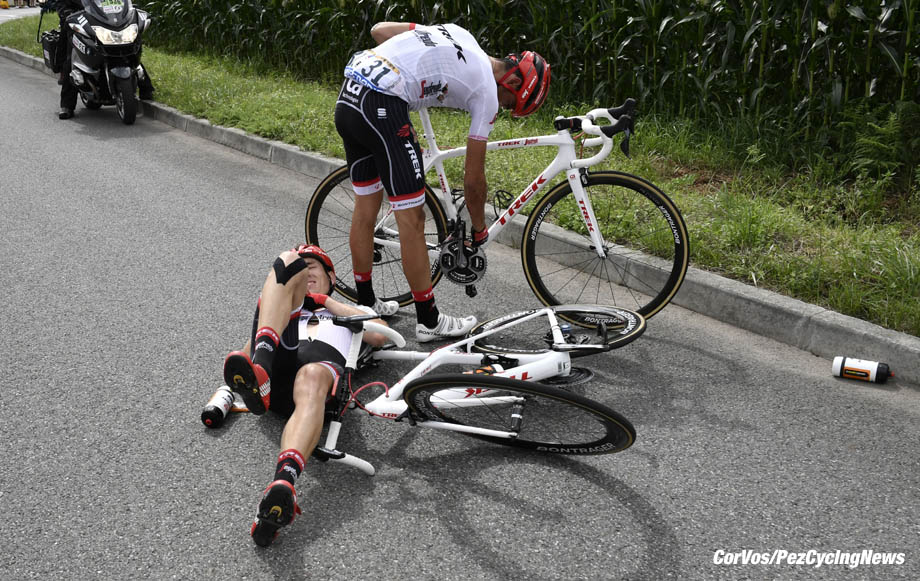 Pau Wow
The chasing peloton now had just one rider to chase, but they weren’t making much of an impression on the three time Polish time trial champion. He had a 45 second lead with 10km left to go. The head of the peloton was becoming increasingly hectic as more and more teams threw men forwards to try and spoil Bodnar’s day.

It was working though, his lead had halved between the 10km and 6km to go marks. However, he was doing a great job for his sprinter Rudi Selig who was getting an easy ride in the peloton behind. Direct Energie and LottoNl-Jumbo were dominating the front as Marcel Kittel was looking dangerously isolated with just one blue clad team mate remaining. 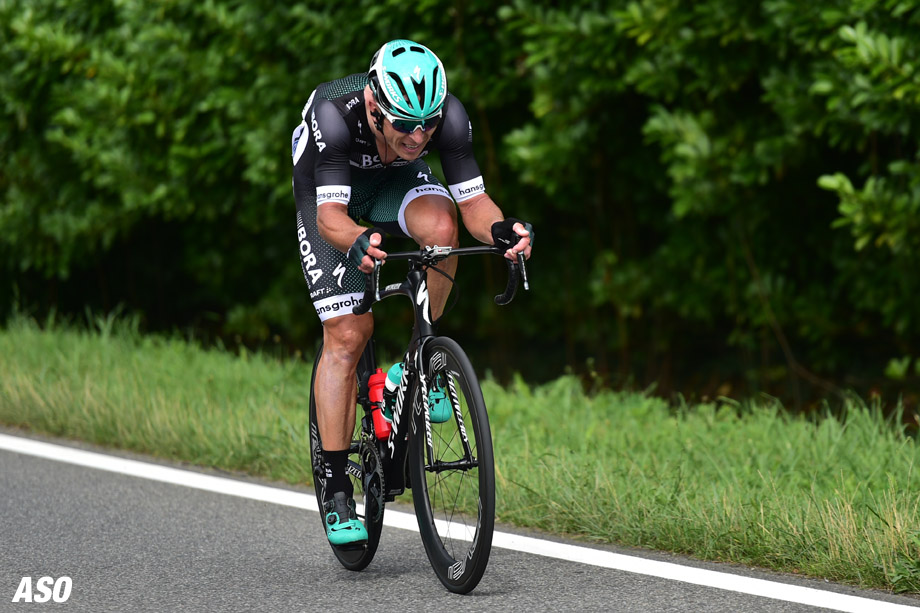 Bodnar was still striking out, but he was within sight of the now Dimension Data led peloton. But he was frustrating them, with 1.6km to go he was still leading. The Polish time trialler wasn’t giving up and he made it under the red kite in the lead. 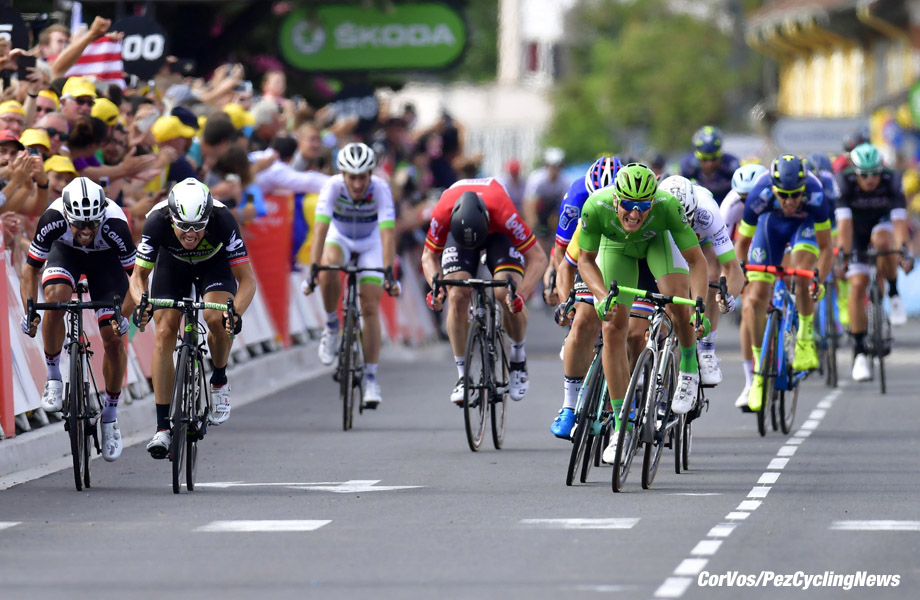 600m to go and he was still just dangling off the front. Oh how he needed more turns, but he wasn’t going to get them and when Kittel’s lead out man, Fabio Sabatini, hit the front, he signed Bodnar’s death certificate and it was to be a sprint. 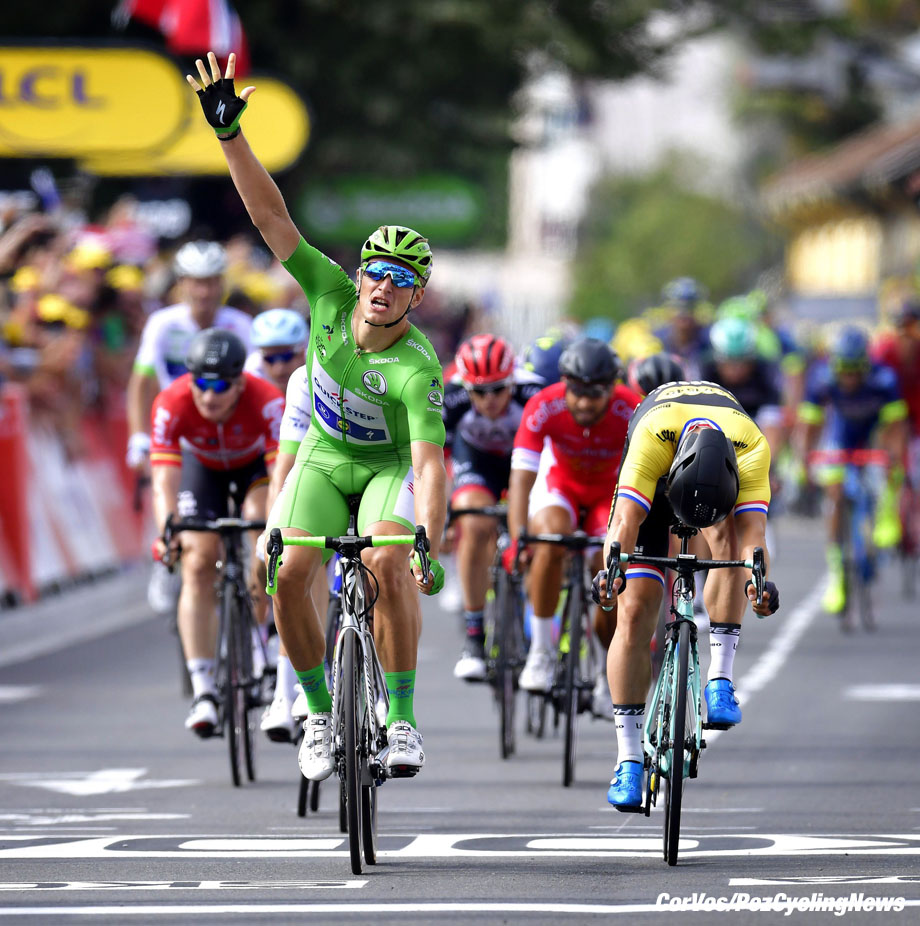 Sabatini was on the front but his charge, Kittel, was way back. Instead it was Edvald Boasson Hagen (Dimension Data) and Michael Matthews who were leading the way. No matter, Kittel is just too good, he came from an absolute mile back to come off the wheel of Boasson Hagen and take yet another victory, his fifth of the Tour. Dylan Groenewegen (LottoNl-Jumbo) had a great late burst but he had to settle for the best of the rest whilst Boasson Hagen faded to third after his long effort. It’s clear though that nobody can touch Kittel when the big German decides to hit the front.

Keep tuned for Ed Hood day on the Tour ‘Roadside’ up soon.