Stage Report: The break was never going to succeed, but Wanty-Gobert’s Aime De Gendt nearly soloed into Toulouse. In the end the peloton could see the plucky Belgian ahead on the wide boulevards and stage 11 came down to a sprint. After an elbows-out finalé it was Lotto Soudal’s Caleb Ewan who threw his bike over the line ahead of Dylan Groenewegen (Jumbo-Visma). Julian Alaphilippe (Deceuninck – Quick-Step) held the overall lead. 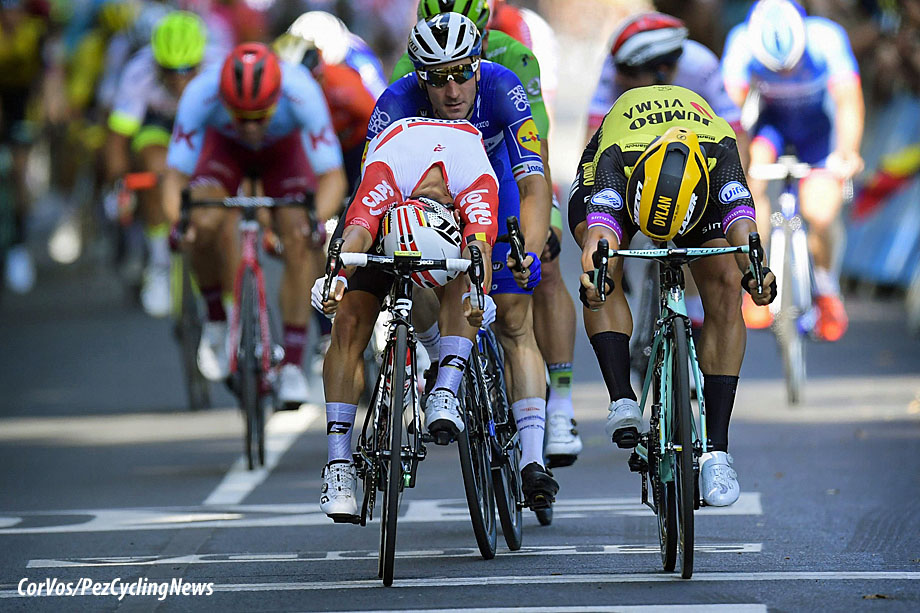 A close call at the line!

So at last Caleb Ewan has his Tour de France stage win. In the sprint on the streets of Toulouse in southern France, he was narrowly faster than Dylan Groenewegen, by just a little bit less than half a wheel. Elia Viviani (Deceuninck – Quick-Step) was third with points leader, Peter Sagan (Bora-Hansgrohe) in fourth. 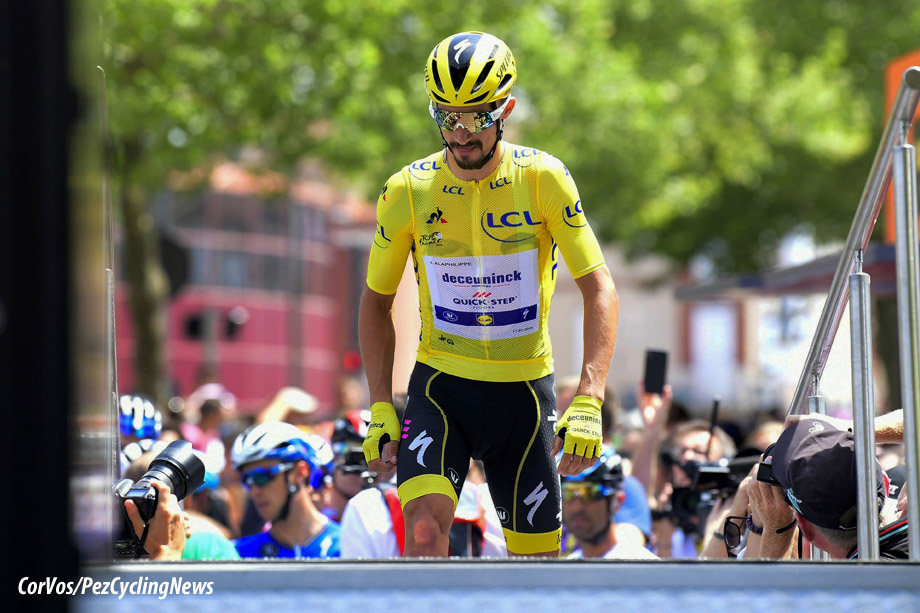 Stage 11 Route:
The stage after the rest day can be a tough one for many riders, but today’s stage isn’t too hard. Stage 11 from Albi to Toulouse; only 167 kilometres with two categorised climbs – A sprinters day. The two climbs come after 32 and 77 kilometres, the first is a Cat. 3, the Côte du Tonnac is 3,6 kilometres long at 4,9%. The second, the Côte de Castelnau de Montmiral, is a short 2,5 kilometres at 3,8%, it shouldn’t cause the fast-finishers any problems. Viviani, Ewan, Groenewegen?

Toulouse: With an ideal terrain for sprinters, it is not surprising to find names such as Rik Van Steenbergen, André Darrigade or Jacques Esclassan among the winners on stages finishing near the city’s famous Capitole building. It was also after a sprint in 1948 that the most prestigious of stage winners in Toulouse tasted triumph, namely Gino Bartali. 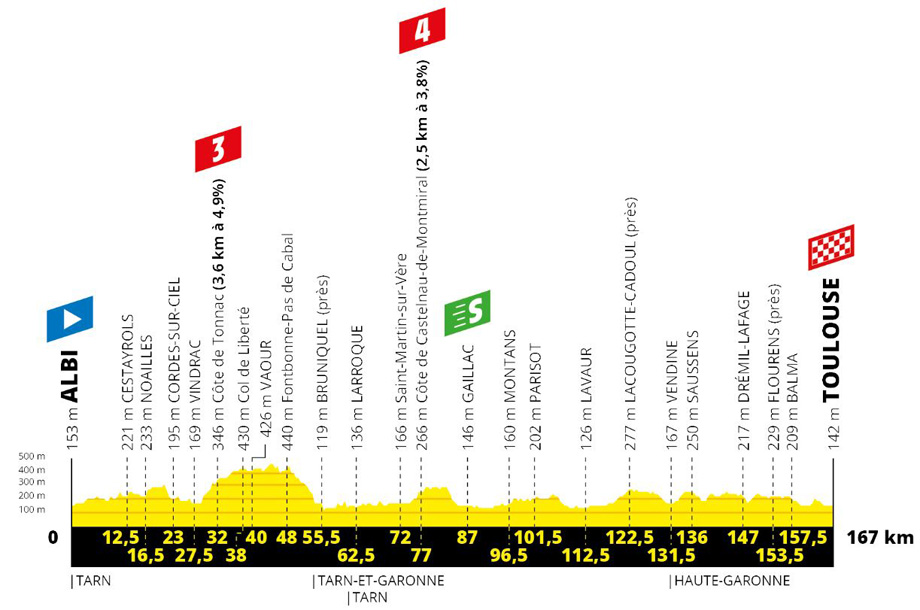 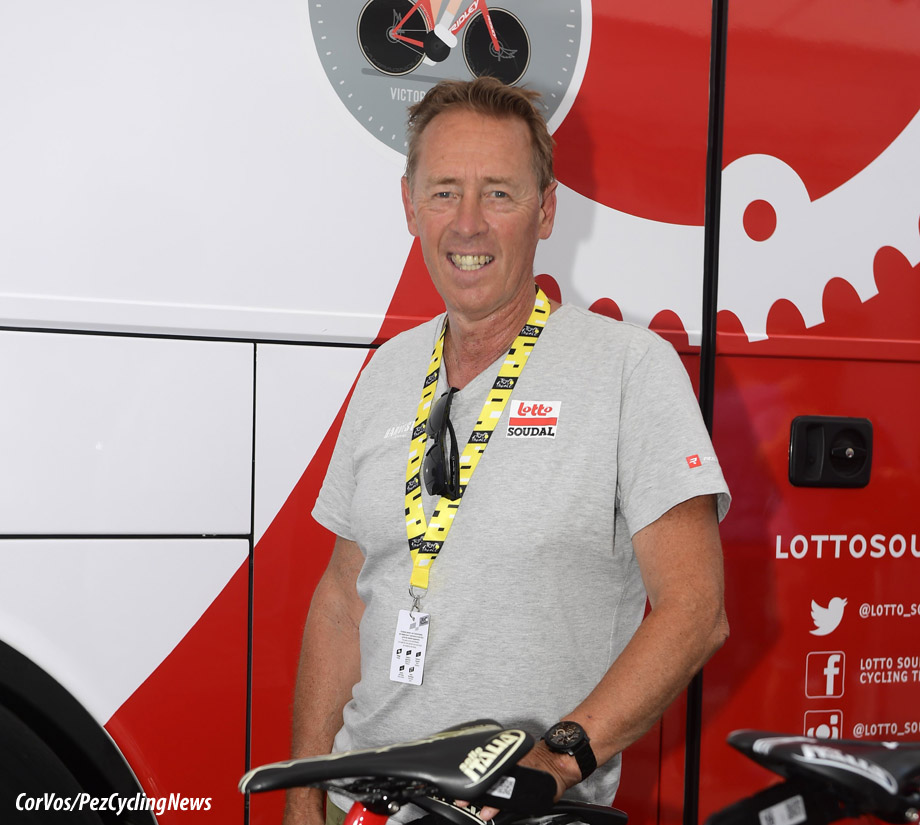 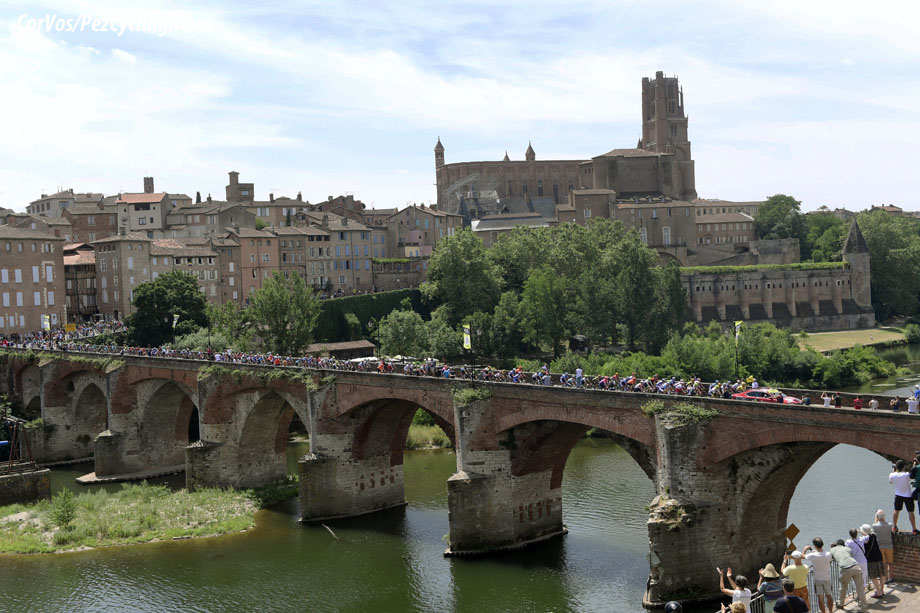 The peloton leaving Albi after the first rest day

After the first rest day, the peloton resumed the 2019 Tour de France with a relatively short and flat ride to Toulouse. The question was: Who would follow in the footsteps of Mark Cavendish, the previous winner in Toulouse in 2008? 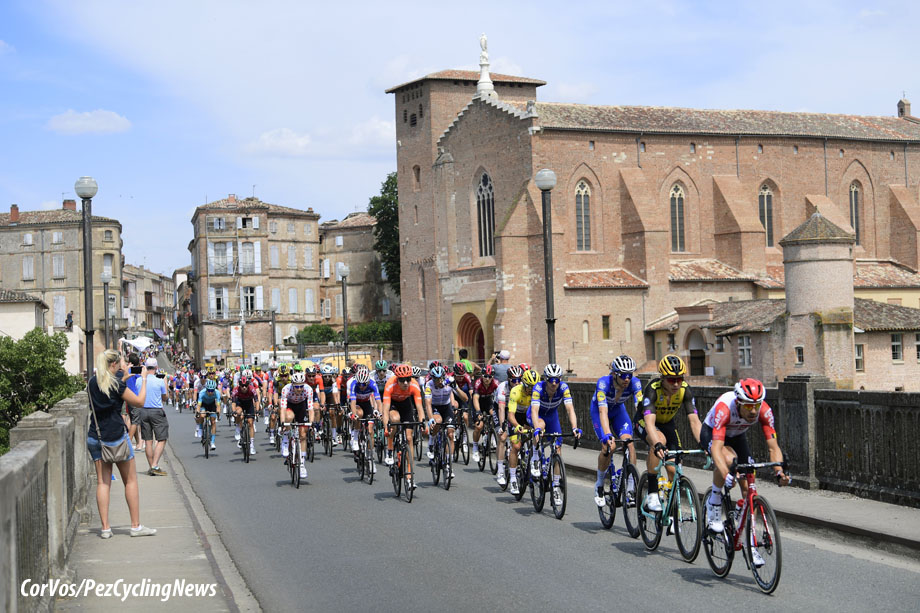 Rick Zabel didn’t make the start in Albi. The German had spent yesterday with flu symptoms and had not recovered enough. As a result, there were only 170 riders on the start line. In the neutralised zone, Cofidis, Total Direct Energie and Wanty-Gobert were ready to make the attack – and with success. 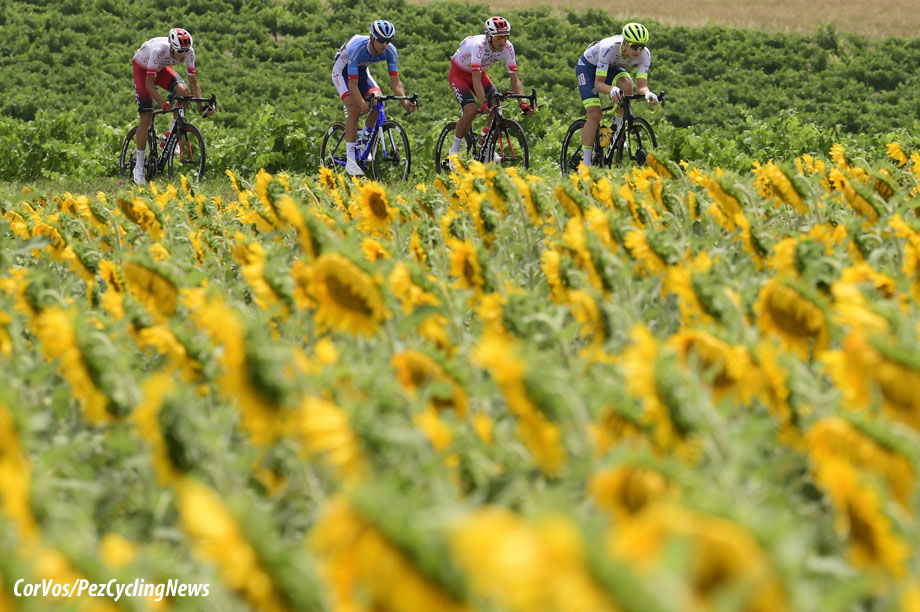 Four escapees animate the race
As soon as Christian Prudhomme gave the go-ahead from his car, Lilian Calmejane, Aimé De Gendt and Cofidis teammates Anthony Perez and Stéphane Rossetto broke away from the peloton and the peloton let them go. Both Calmejane and Perez come from this area, and after a difficult first week they wanted to show themselves in front of their home fans. 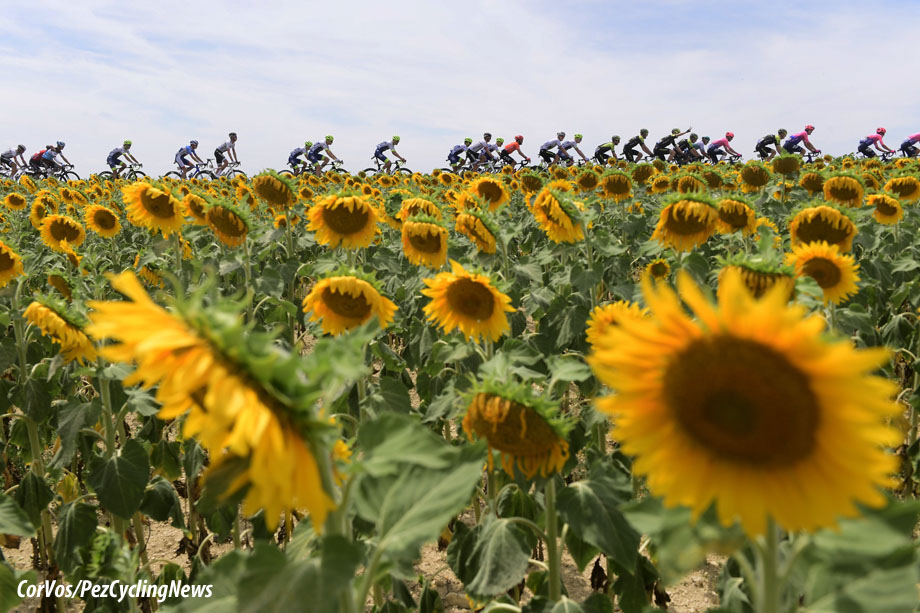 The peloton let the break go, but only for 2 minutes advantage 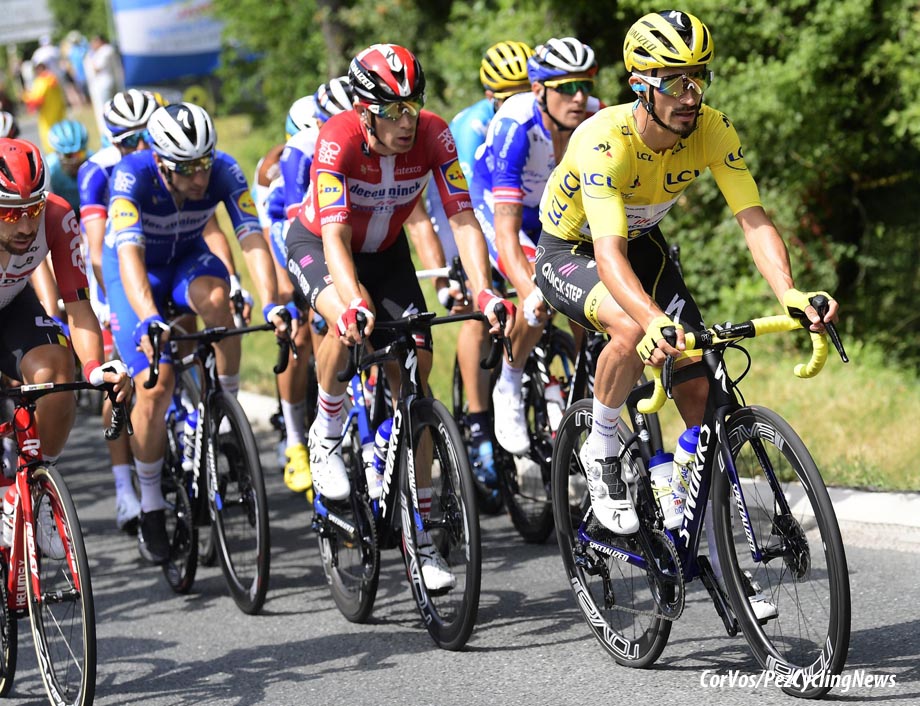 The yellow jersey was always close to the front

In the peloton; Deceuninck – Quick-Step, Lotto Soudal and Jumbo-Visma were in control. With Elia Viviani, Caleb Ewan and Dylan Groenewegen, they had three major contenders for the stage win. The leading group reached the top of the Côte de Tonnac after 32 kilometres with a lead of just under 3 minutes. Perez was the first over the summit, but the Frenchman was no danger to Tim Wellens’ polka dot jersey. 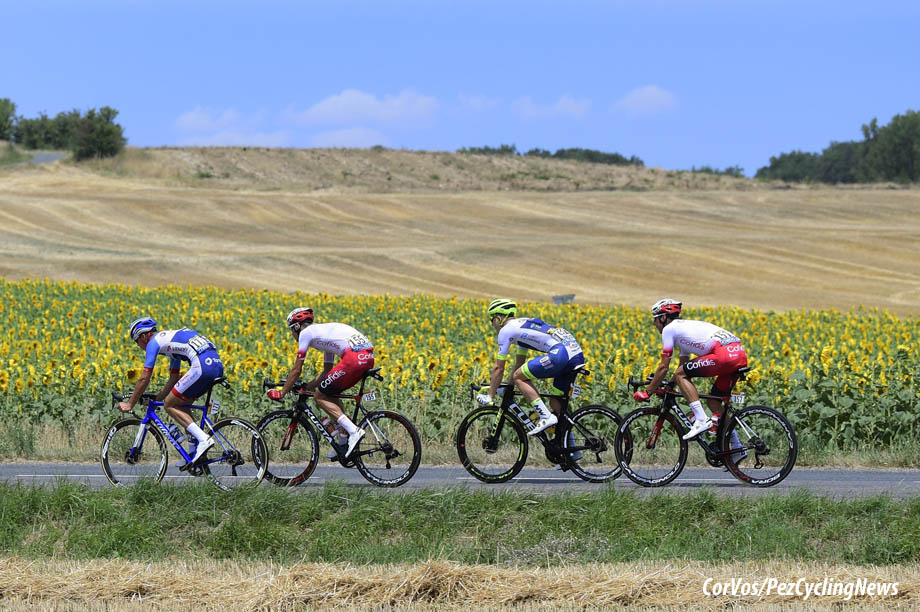 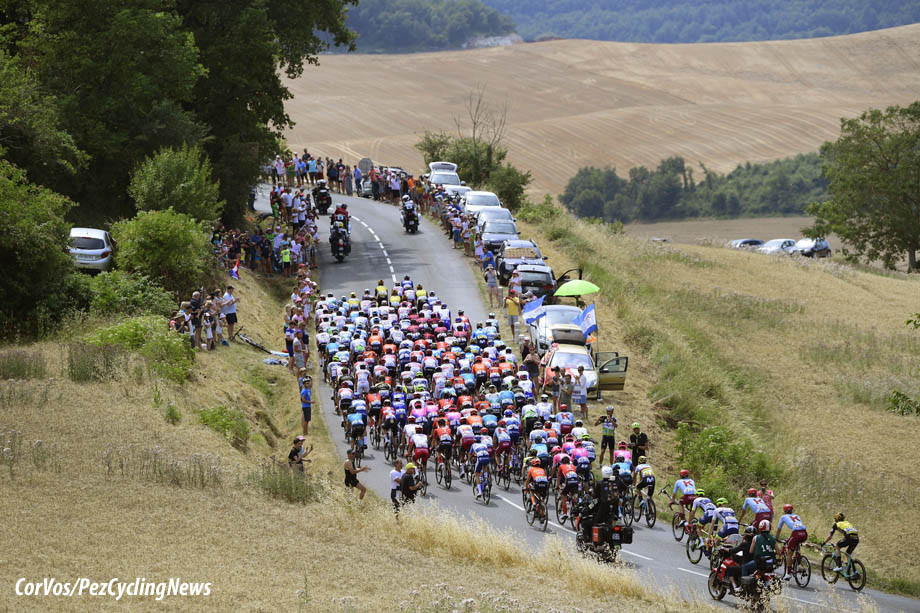 A sprinters day – But not a slow day

On the Côte de Castelnau-de-Montmiral after 77 kilometres it was Perez again to cross the line first and again at the intermediate sprint 10 kilometres later. Elia Viviani beat Peter Sagan and Sonny Colbrelli in the peloton. But there was still 80 stressful kilometres to the finish in Toulouse. 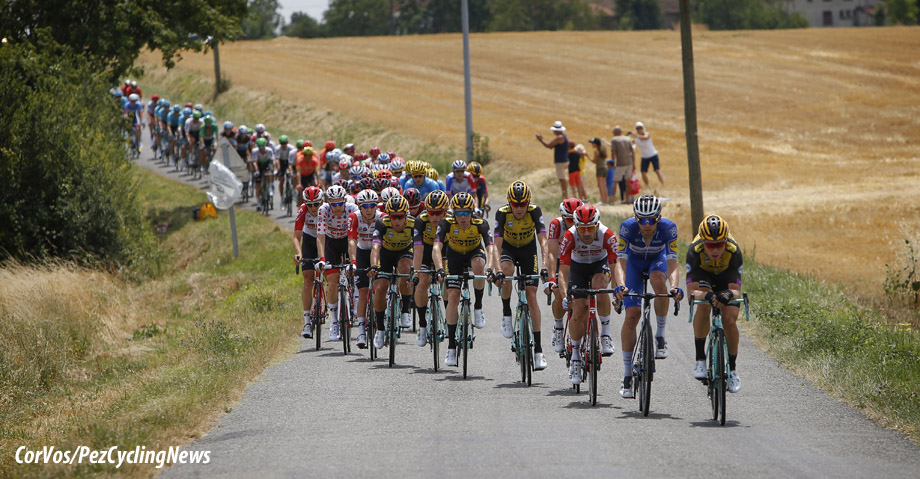 The speed picked up in the final 20K

Terpstra abandoned
In the bunch; the sprinter’s teams slowly began to reduce the lead of the break, their lead was under 3 minutes with 50 kilometres to go and the writing was on the wall. The peloton started to get nervous in last 30 kilometres and there was the inevitable crash. The main victim was Niki Terpstra, who could not carry on. Richie Porte, Nairo Quintana and Cees Bol were among the other who were delayed, but managed to rejoin. 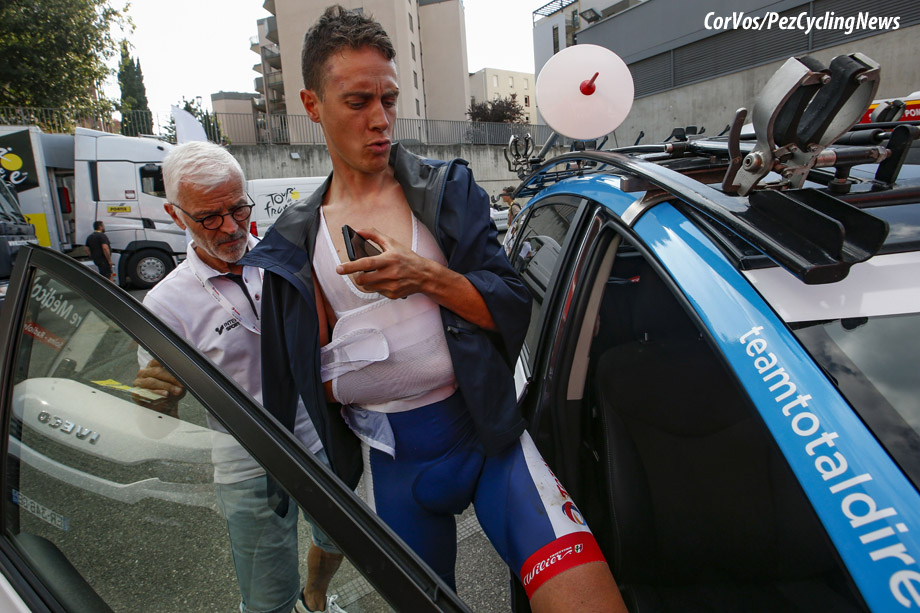 Not a good year for Niki Terpstra 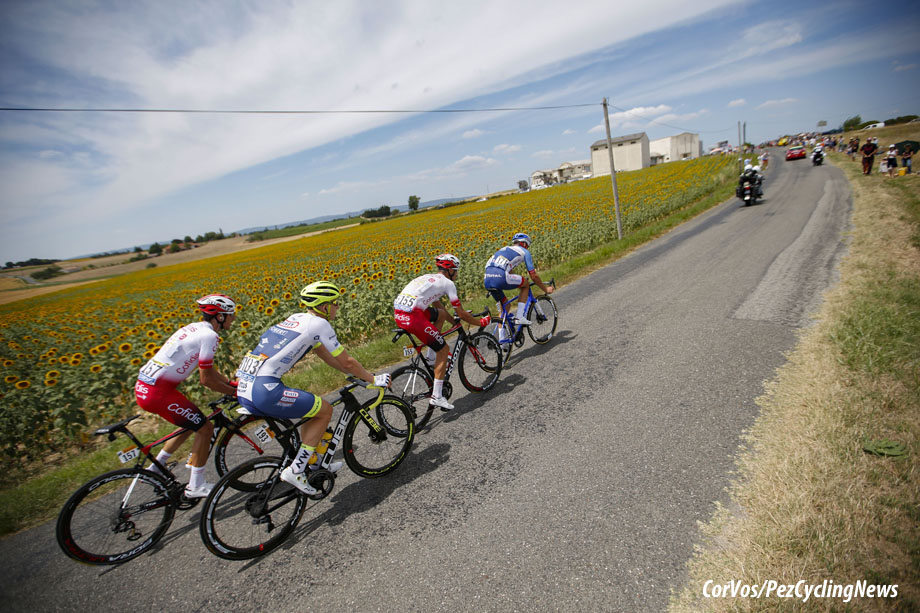 A strong jump from De Gendt split the front group. Perez was the first to be caught by the bunch and a little later Calmejane and Rossetto shook hands. Only De Gendt was left at the front. Although the Wanty-Gobert rider was already 160 kilometres into the dat, he still found the energy to hold the baying peloton off. 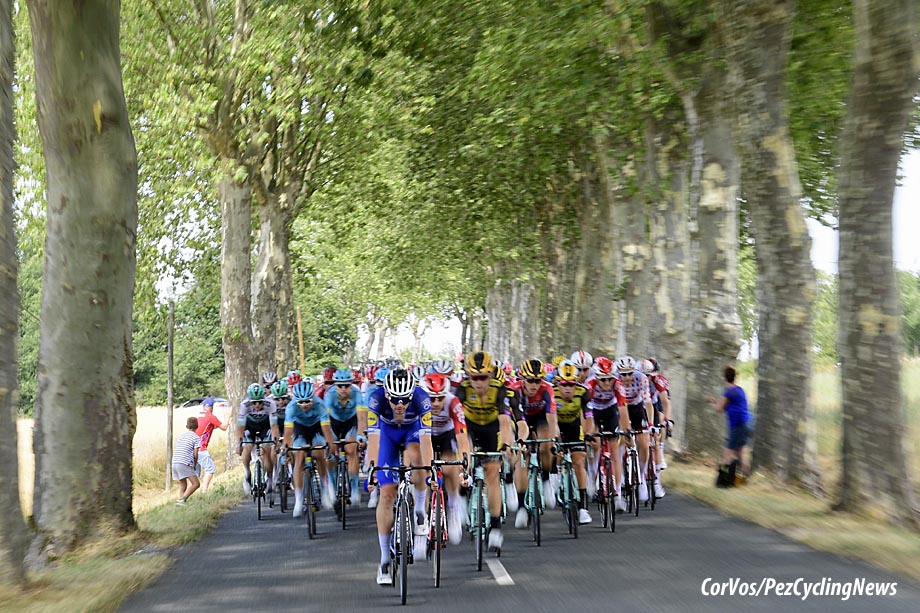 The peloton had De Gendt in their sights 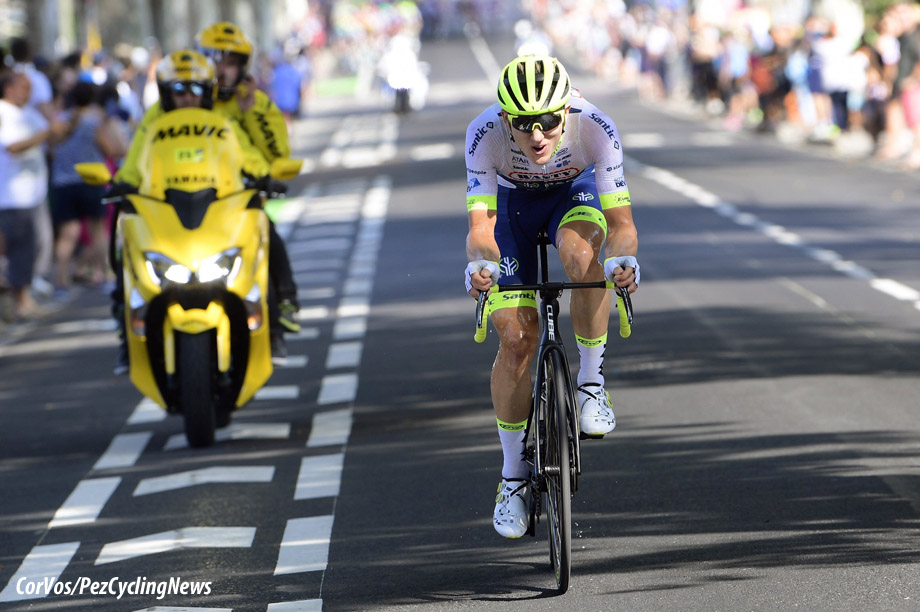 The stage was five kilometres too long

In the end De Gendt had to give up the fight in the last 5 kilometres and was caught by the yellow-black train of Jumbo-Visma. Wout van Aert turned out to be the engine of the train, and pulled hard for his fast-man, Dylan Groenewegen. Mike Teunissen also did a long lead-out in the last kilometre. 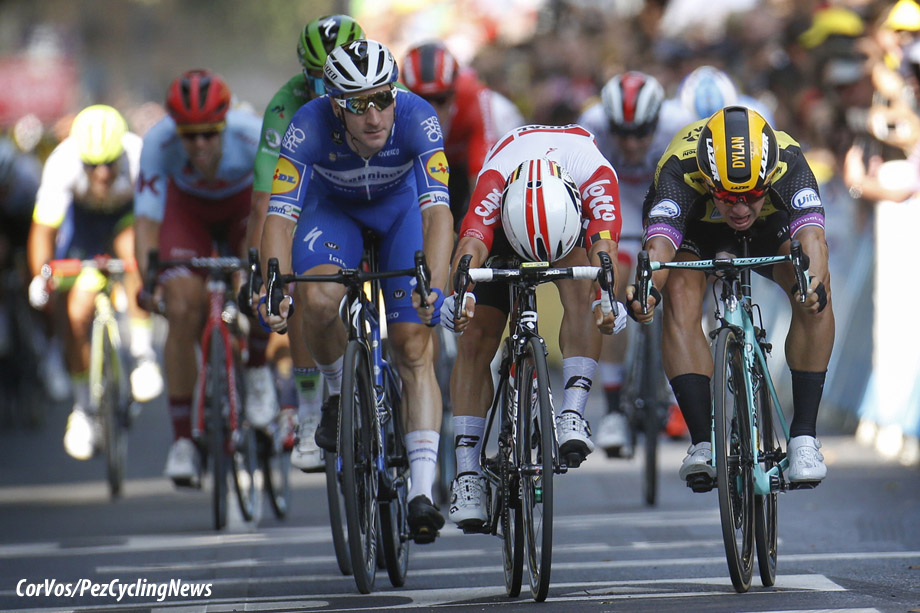 It went to the powerful little Australian

Ewan closes the gap on Groenewegen
In the last corner, Teunissen went ‘full gas’ for his leader, who was the first to start the sprint. Caleb Ewan had to close the gap, but on the finish line the Australian lunged his bike across the line to win by a couple of tyre widths. Groenewegen second, Viviani third and Sagan third. 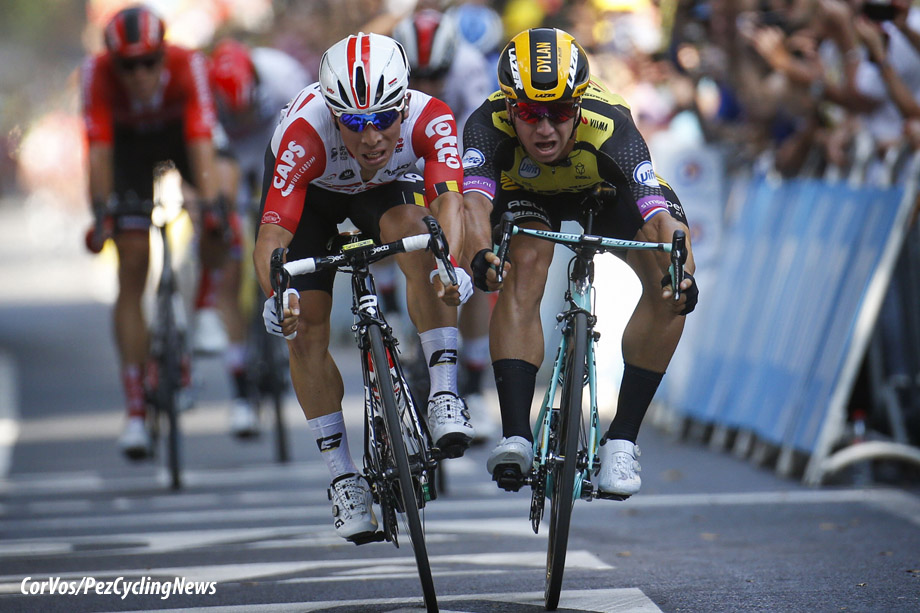 Stage winner, Caleb Ewan (Lotto Soudal): “I can’t believe it. I’ve been so close in the four last sprint I’ve done. But my team never lost faith in me and I never lost faith in my team. I knew if everything was coming together, I could be the fastest on the day. With 10km to go, [lead out man] Jasper [De Buyst] crashed. I was at the back of the bunch, but Roger [Kluge] came back for me and took me back to Dylan Groenewegen’s wheel in the last kilometre. Luckily I had the legs to finish it off. This is a childhood dream come true. There’s no other race that I’ve wanted to win as a kid. The Tour de France is something so distant from Australia, something we watch on TV… it’s fantastic!” 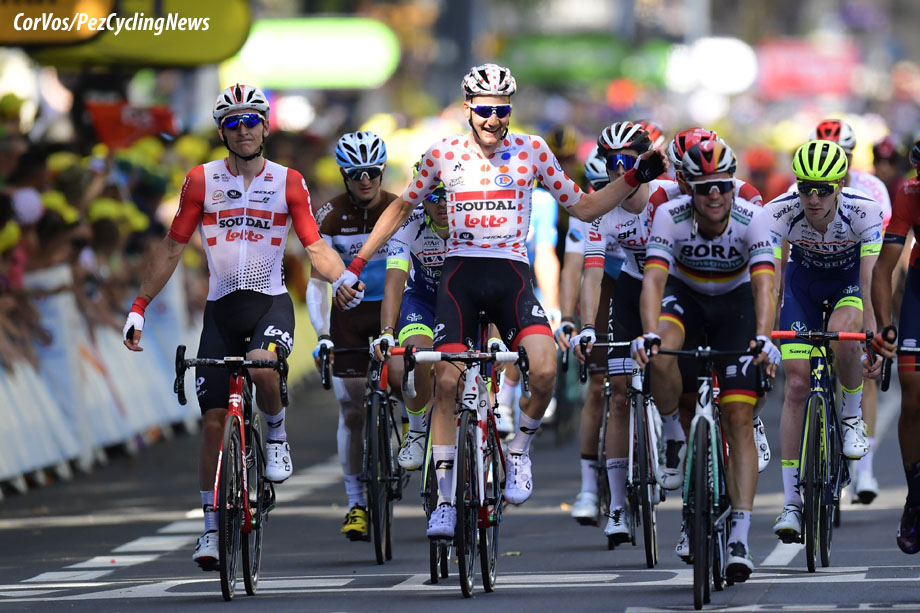 All happy at Lotto Soudal