Stage Report: Just when it looked like Geraint Thomas (Ineos) would be riding into the horizon on the Tourmalet for the yellow jersey, the Welshman performed his own ‘Brexit’ and was dropped by the group of favourites, including Deceuninck – Quick-Step’s Julian Alaphilippe. Thibaut Pinot (Groupama-FDJ) put in the stage 14 winning jump in the final metres for a French double. 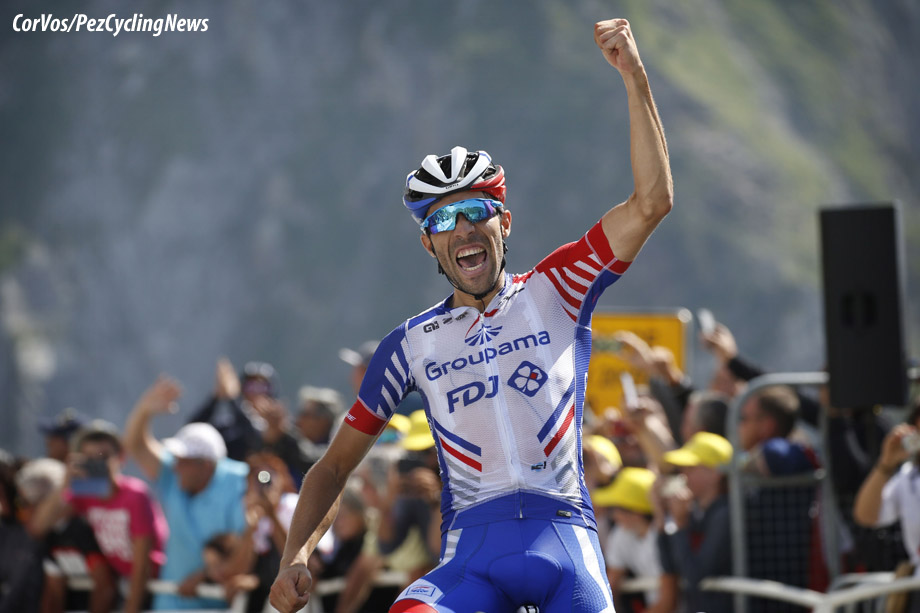 Pinot was the best on the stage

Thibaut Pinot brought France into ecstasy by winning the first big Pyrenees stage. In the final phase of the mythical Tourmalet, he rode away from the front group and then went solo to win. Julian Alaphilippe pushed himself to the limit to take second place and retained the yellow jersey. There were time losses for Rigoberto Uràn, Geraint Thomas, Richie Porte, Bauke Mollema and Nairo Quintana. 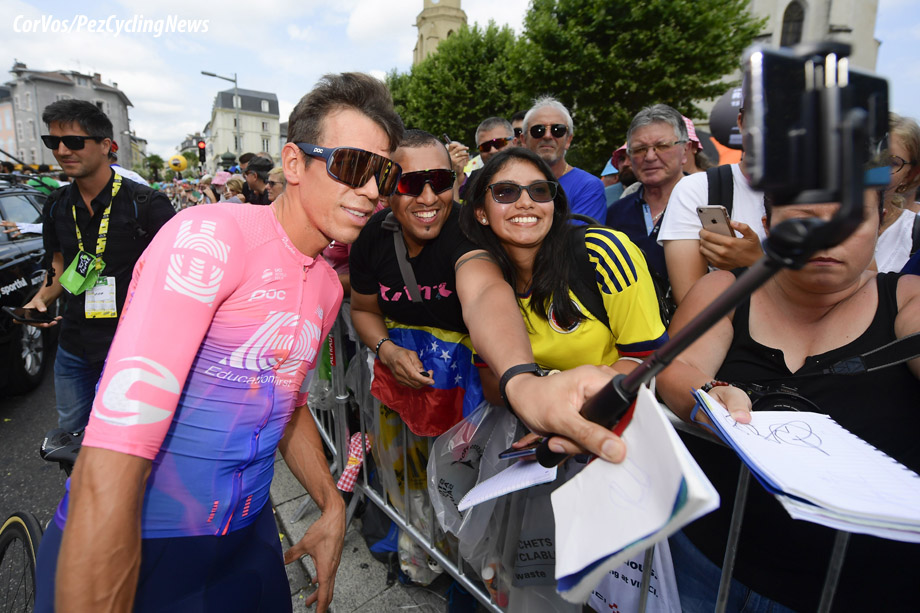 At every Grand Tour there are more and more Colombian fans – Rigoberto Urán or not!

Stage 14 Route:
A short but hard stage taking in three climbs in the 117,5 kilometres. The first climb is the comparatively easy Côte de Labatmale, a Cat. 4 of only 1,4 kilometres at 6.7%. The climbs of the Col du Soulor (Cat.1 11.9km at 7.8%) and the summit finish on the HC Cat. Tourmalet, 19km at 7.4% will sort out the men. The shortness of the stage may be a help to yellow jersey Julian Alaphilippe, but Ineos will be looking for any cracks. 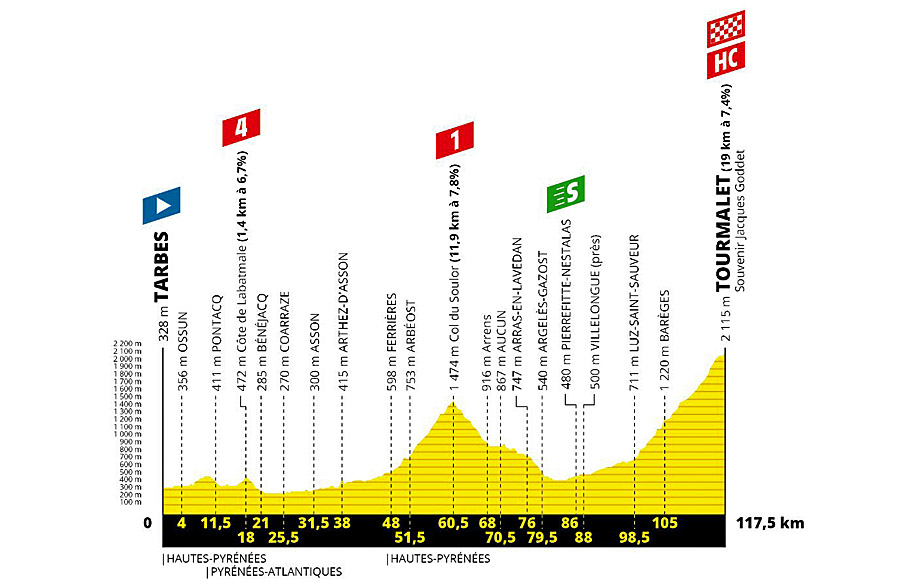 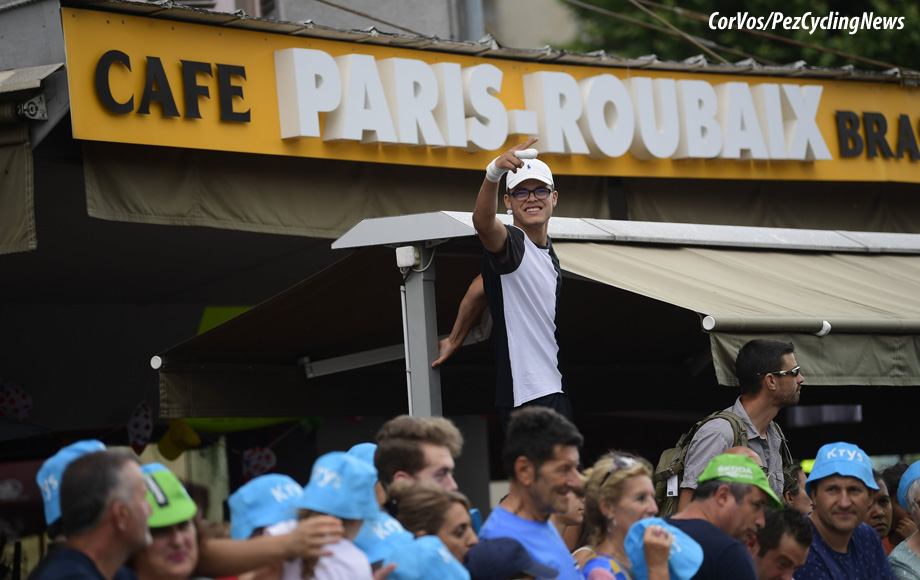 The Paris-Roubaix cafe in Tarbes – Roubaix is over 1,000 kilometres north of Tarbes, owner a cycling fan? 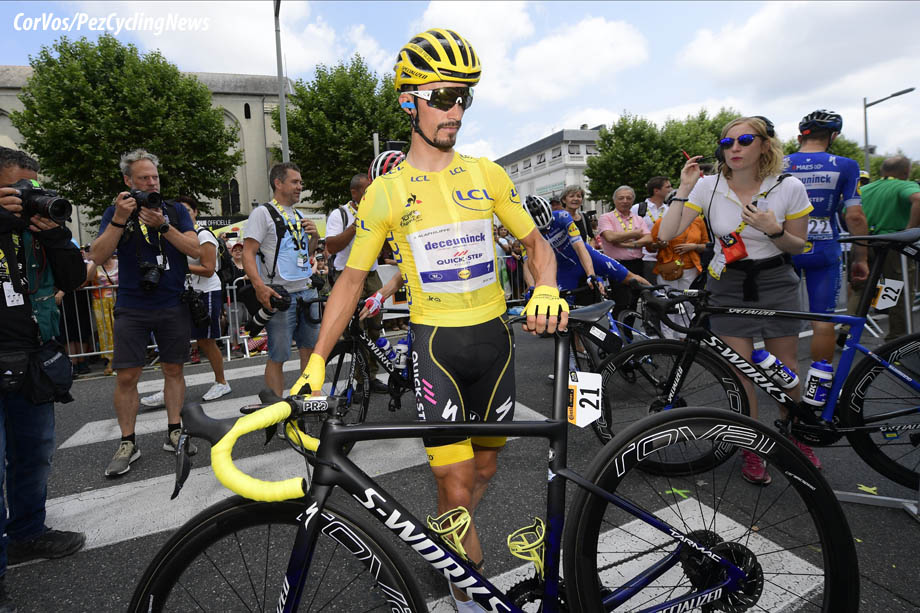 A hard day ahead – Can Julian Alaphilippe hold yellow?

Nibali and Sagan attack
The official start was postponed by a few kilometres due to a farmers protest. Surprisingly, the first two attackers were Vincenzo Nibali (Bahrain-Merida) and Peter Sagan (Bora-Hansgrohe), who has been wearing the green jersey since the second day. 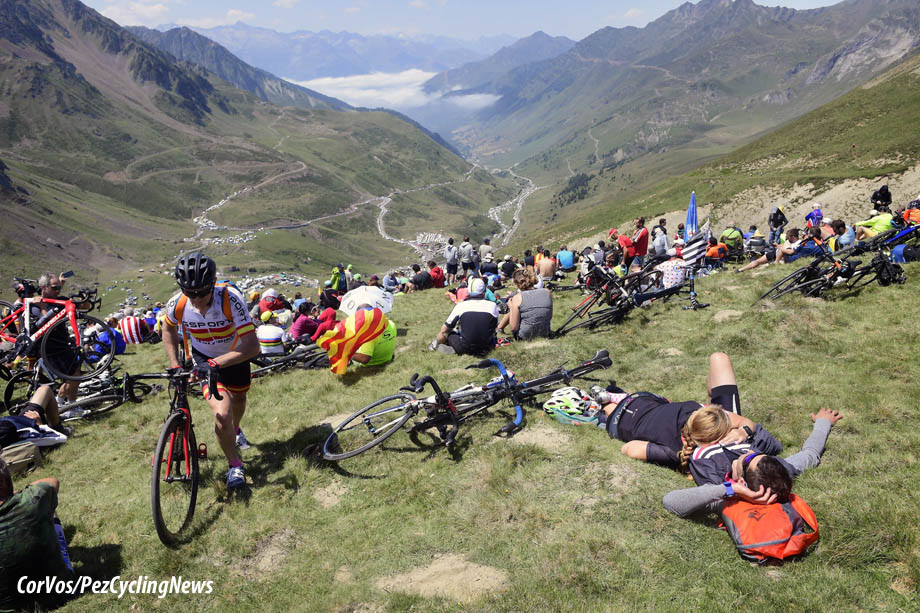 The fans were on the Tourmalet early

Soon after the start in Tarbes, Nibali was the first over the Côte de Labatmale, but this was only a speed bump compared to what was to come. There was a counter-reaction from the peloton, and 15 riders were able to cross to the pair up front. Total Direct Energie was best represented at the front with Lilian Calmejane, Romain Sicard and Rein Taaramäe. In addition, the leading group also consisted of Alexis Vuillermoz, Matej Mohorič, Matthieu Ladagnous, Carlos Verona, Luis Léon Sánchez, Sergio Henao, Lennard Kämna, KOM Tim Wellens, the Katusha-Alpecin duo Ilnur Zakarin and Marco Haller, Guillaume Martin and Élie Gesbert. Martin was the highest on the overall in 25th place at 9:02 off yellow jersey of Julian Alaphilippe. 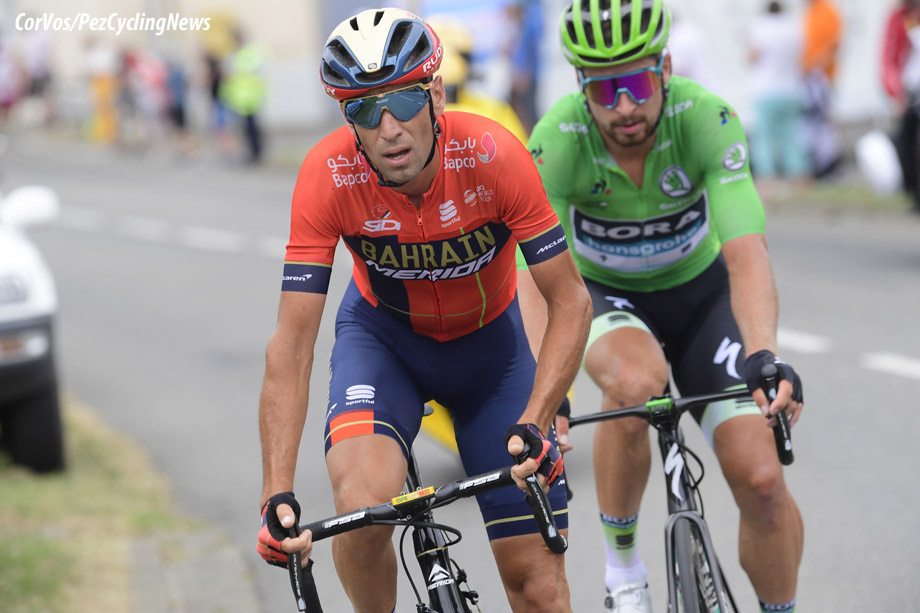 Vincenzo Nibali and Peter Sagan wanted to be in the break, for different reasons

Col du Soulor caused problems
At the foot of the Col du Soulor, the escape had a lead of 2:30 on the peloton, where Groupama-FDJ and Deceuninck – Quick-Step were in charge. The climb caused problems in the leading group; Haller, Henao, Ladagnous and Taaramäe were dropped, followed by Sagan. Wellens and Nibali were the strongest at the front and were first over the top. 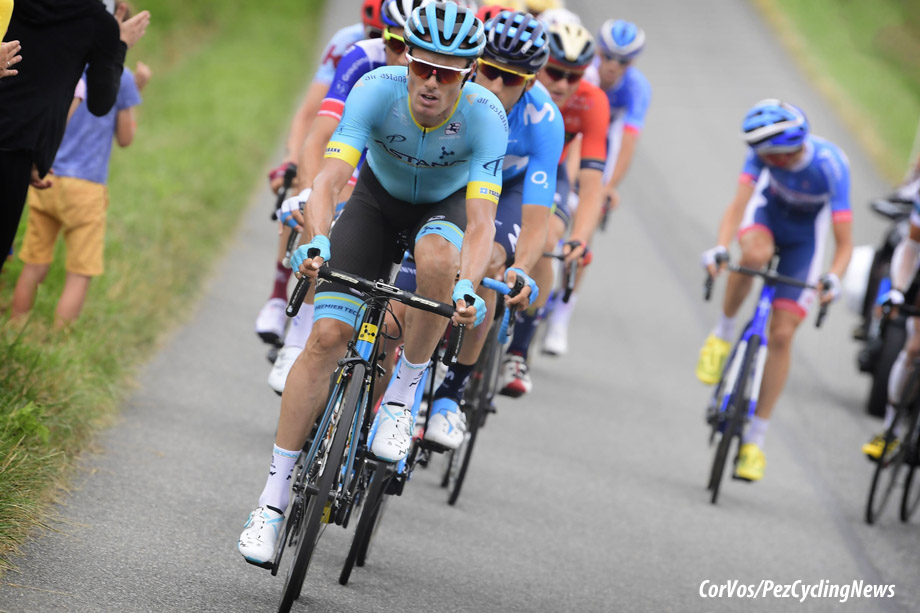 The peloton also lost a few on the Col du Soulor. Romain Bardet was the first GC rider to drop out. Then Adam Yates, the first rider in the top 10 to go. Patrick Konrad, 14th overall was next. Partly responsible for this was the high pace that Movistar imposed on the group. Yates and Konrad were able to rejoin a little later, but Bardet lost more and more ground. 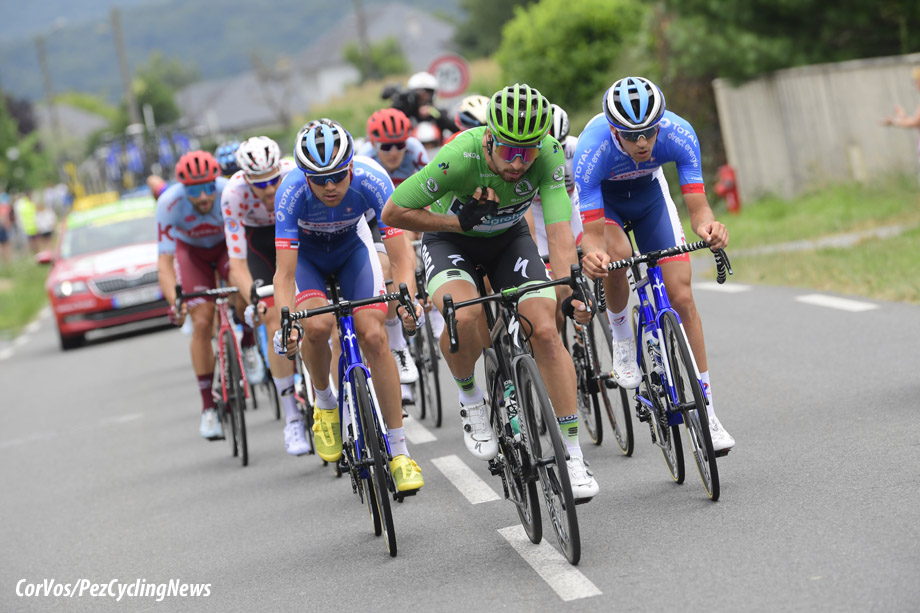 Sagan was there for the points

After the Soulor, Élie Gesbert was able to join Wellens and Nibali again, after which the three of them pushed on. Shortly after, Calmejane, Sicard, Zakarin, Kämna and Sánchez caught them. For Peter Sagan had been dropped earlier, but still grabbed some sprint points from the peloton. 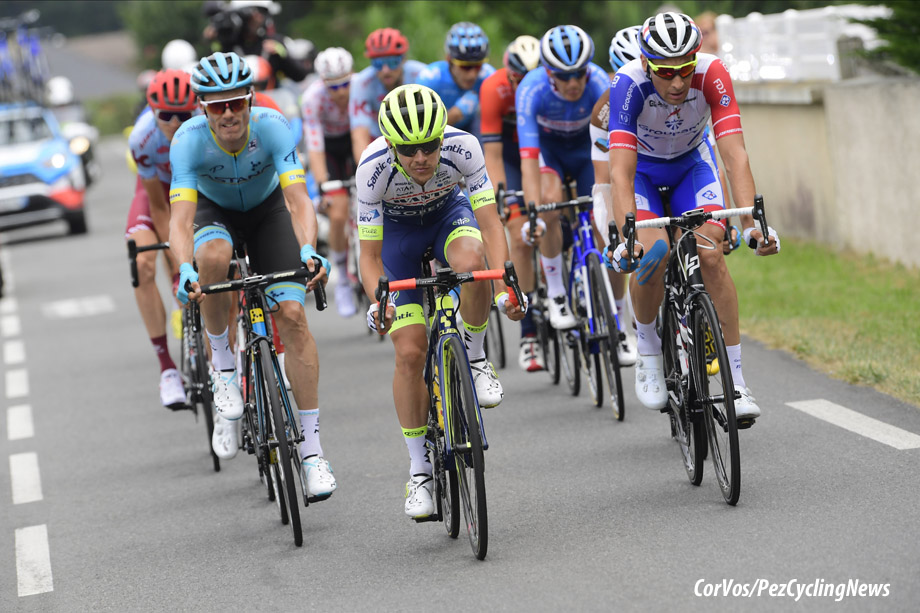 The break didn’t have a chance today

Sicard tries a solo
After the intermediate sprint, it was time to look to the Tourmalet. The difference between the leading group and the peloton was not large, so Romain Sicard went solo. When the road started to rise, more and more early break riders were caught. Only Calmejane and Gesbert stood between Sicard and the peloton, Movistar were still in command. Sicard was the first to hit the foot of the Tourmalet. Gesbert rode away from Calmejane and joined Sicard 16 kilometres from the finish. The Arkéa Samsic rider had great legs and went on alone. 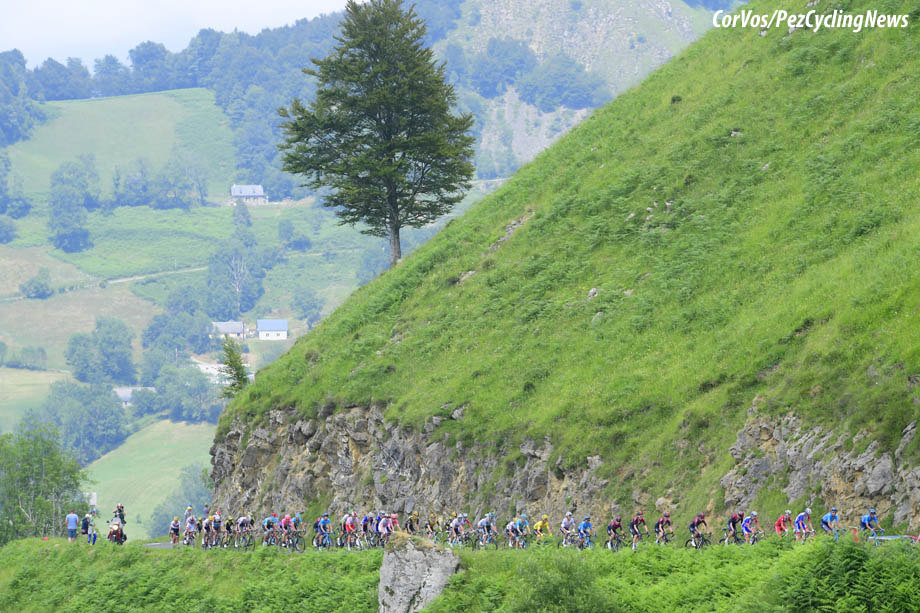 In the already thinned peloton, Adam Yates and Patrick Konrad again were in trouble. The Brit and the Austrian were dropped early on the Tourmalet. They were not the only ones: Guillaume Martin (25th) and Daniel Martin (11th) also ran into problems. Andrey Amador and later Marc Soler set a fast pace. 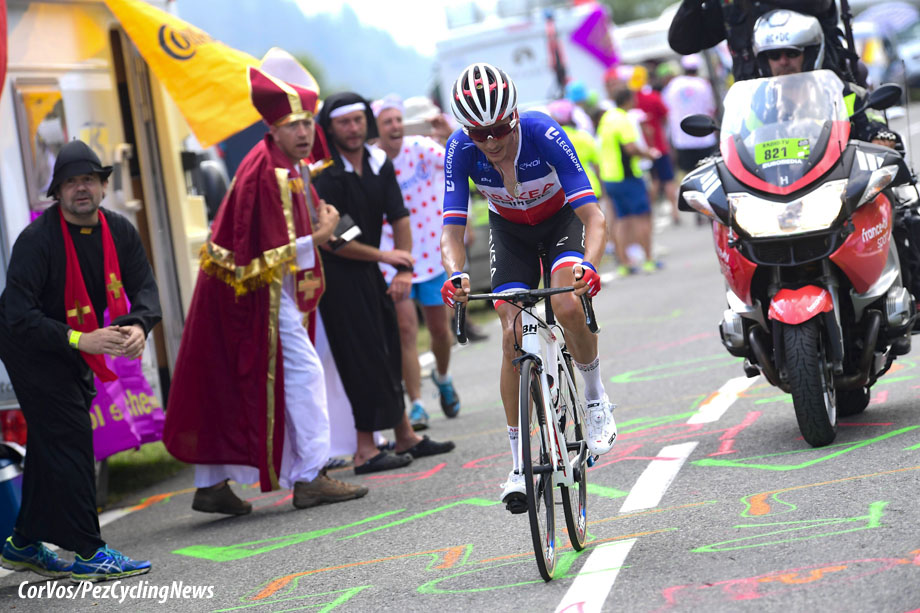 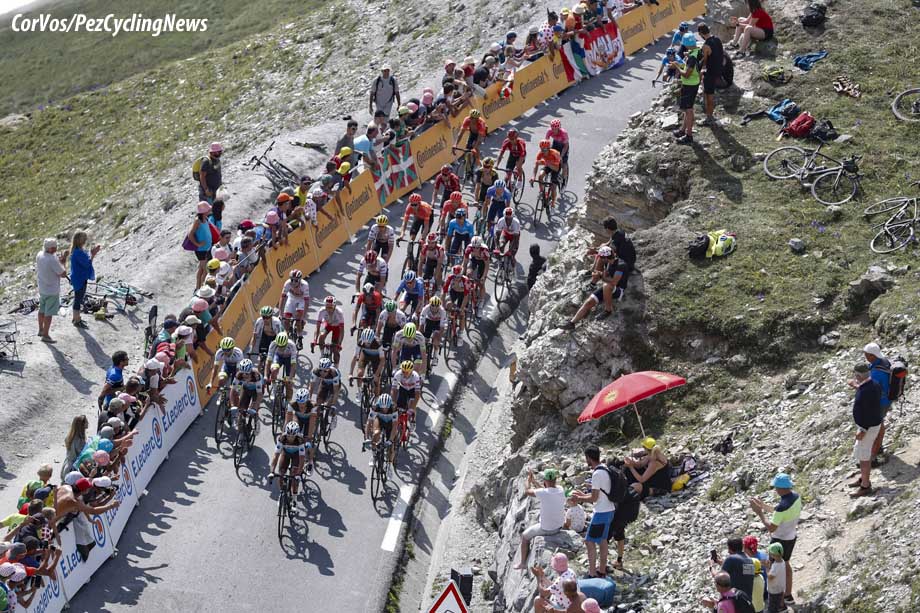 Who can win from this group?

Gesbert and all the escapees were caught 10 kilometres from the finish line. The fast pace of his teammates caused Nairo Quintana to run into problems. The Colombian was in 9th place overall, the best placed Movistar rider, but with Alejandro Valverde (12th) and Mikel Landa (18th) the Spanish team still had two men up front. 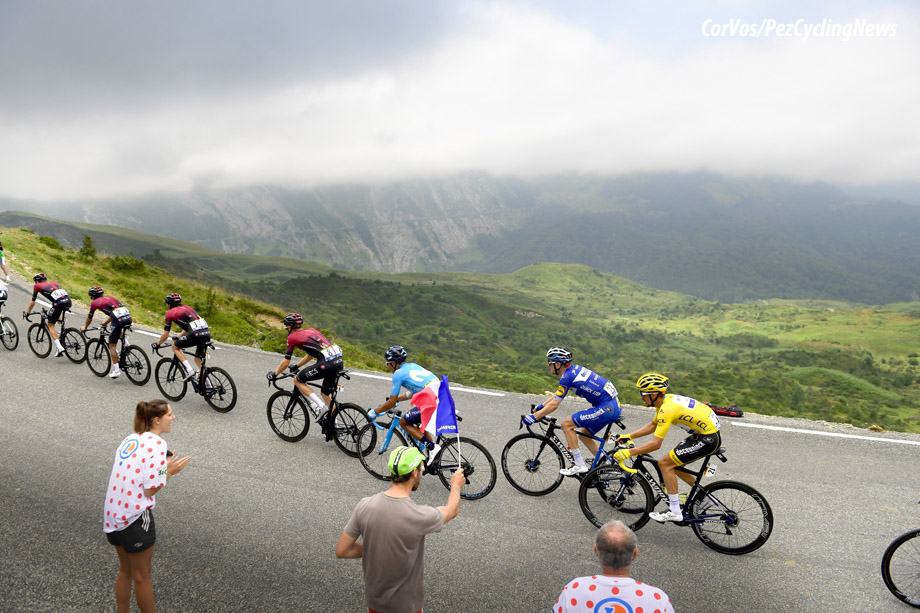 The group of favourites was getting smaller

For Warren Barguil it was not fast enough at 9 kilometres from the finish. The French champion immediately took 10 seconds on the group of favourites. In the meantime, the Ineos riders had taken the lead behind. Then David Gaudu piloted his leader, Thibaut Pinot, off the front of the favourites, but the others were not surprised. 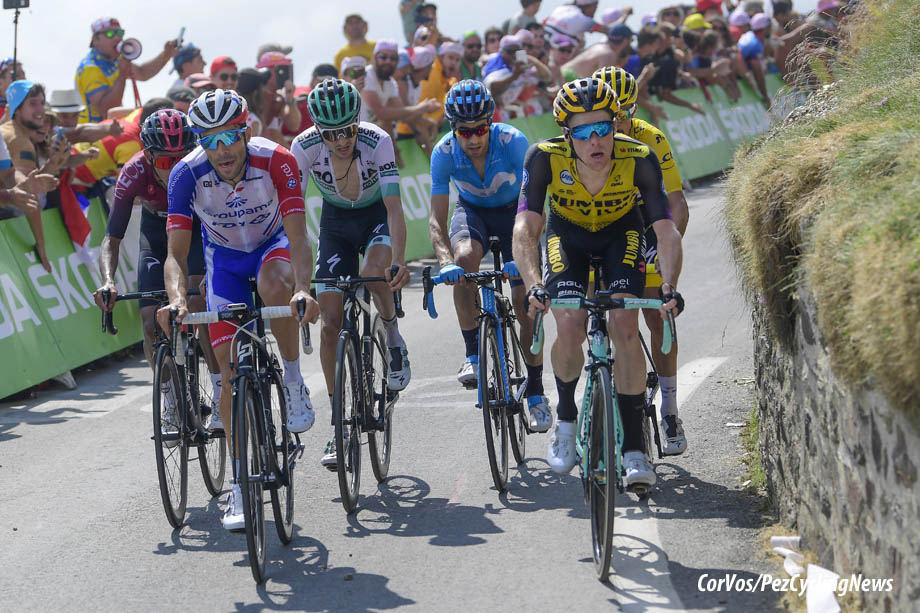 Down to the last six men standing 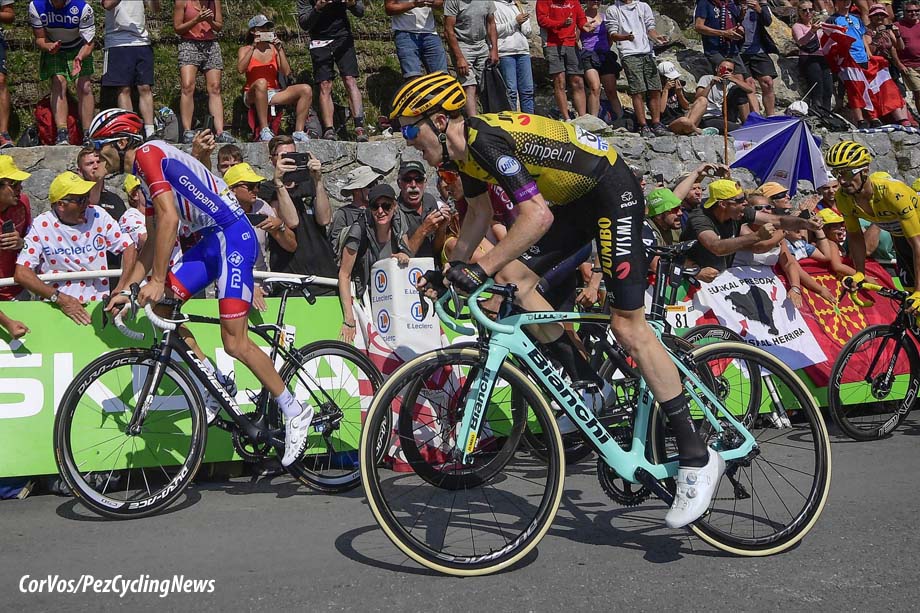 Richie Porte (15th) and Enric Mas (4th) were dropped as Barguil was caught, Alaphilippe and Steven Kruijswijk were still fighting hard. The Dutchman had the support of George Bennett and Laurens De Plus. Gaudu led the group to the last three and a half kilometres. Then the men of Jumbo-Visma took the lead. The three tough last kilometres would sort out the day. 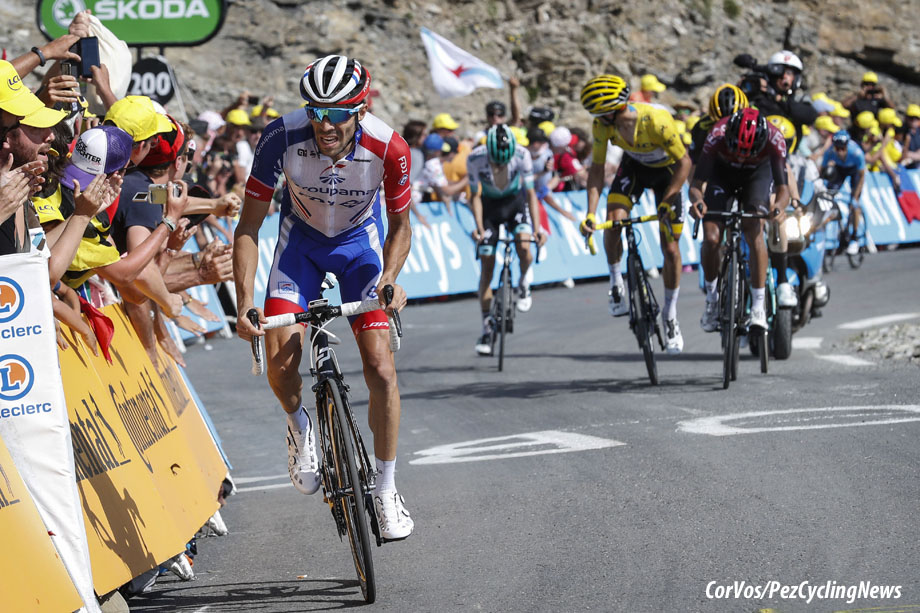 Pinot made his attack

Pinot attacks for the win
Emanuel Buchmann attacked just over a kilometre before the finish. The move of the Bora-Hansgrohe rider put defending champion Geraint Thomas in trouble. Only the yellow jersey Alaphilippe, Bernal, Kruijswijk, Landa and Pinot could stay with him. With a sharp attack, Pinot shook off his other competitors in the final metres of the climb to take the win. Alaphilippe held off Kruijswijk in the battle for second place. 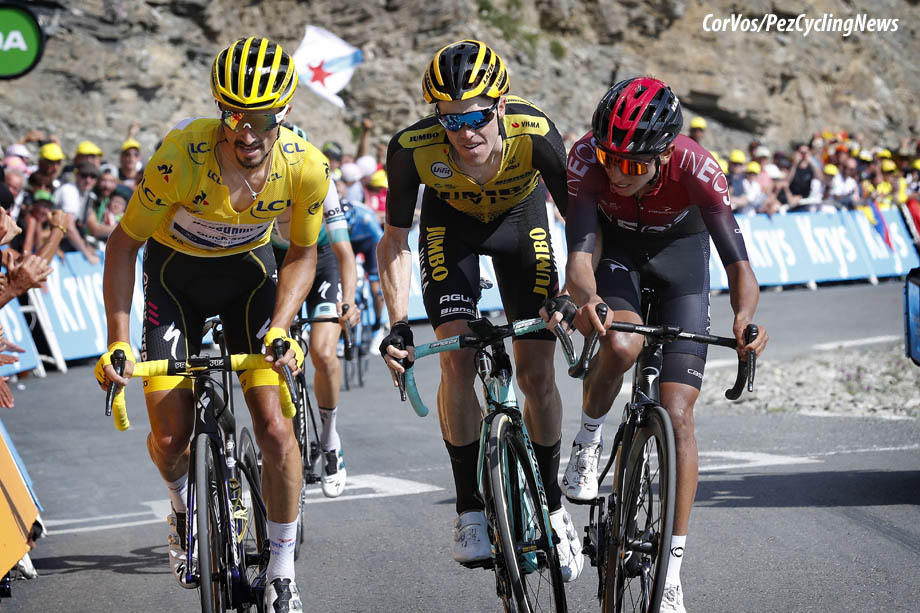 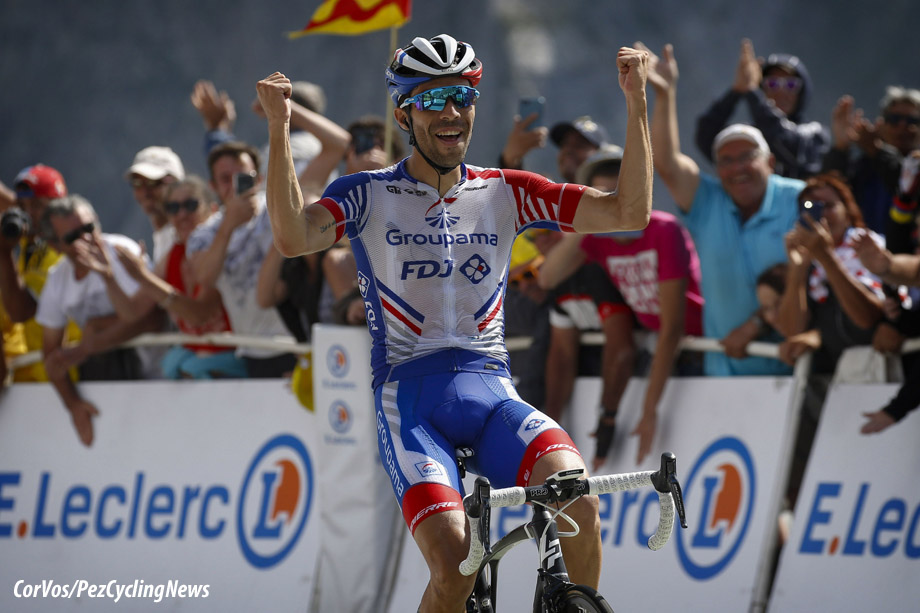 Stage winner, Thibaut Pinot (Groupama-FDJ): “This is a great win. Every victory in the Tour is important, but with this I continue to complement my list of achievements nicely. The Tourmalet is mythical. Winning here and the way I like that. We had to do something. Our team, especially Gaudu, was excellent. David is the future. The Tour is certainly not done yet. We will continue to fight.” 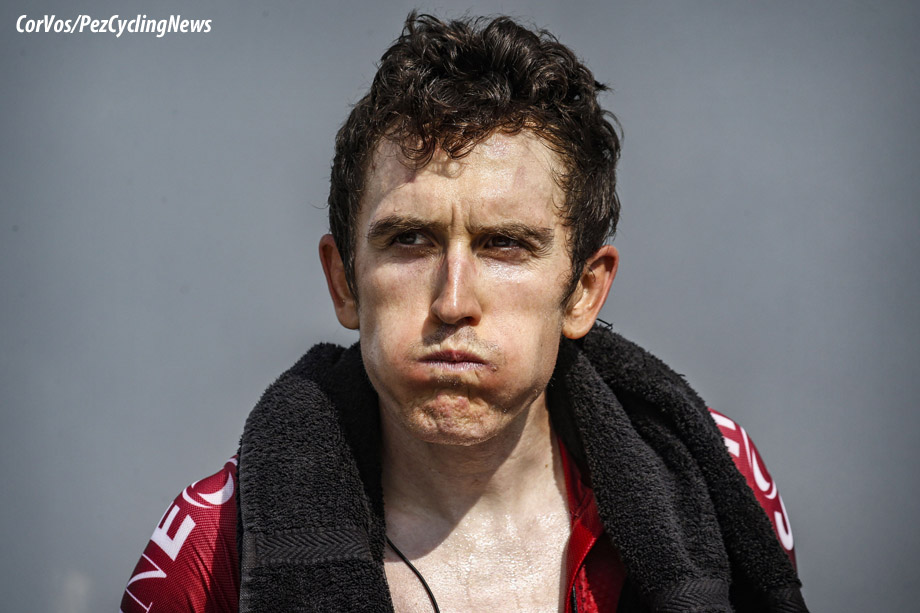 Thomas can still win the 2019 Tour, but needs to be careful