After a month off with a bad back starting last October (that’s what you get for pushing a teammate up several hills, and not even so much as a thank you afterwards) and another two months as a result of, in order of painfulness, a broken thumb, damaged cartilage in the right knee and a severe contusion on the left shin (all from getting knocked off my scooter by a dodgy driver), I think I’m suffering from a severe lack of base training.

Instead of following the traditional scheme of things, simply because I had no time to do so, I went from 3 months completely off and a waist-whopping 86kg to doing 92 hours in January, 87 in February and dropped 10kg in the process, and then, if that wasn’t kind of silly enough, starting a 2.1 UCI stage race last Monday.

Recipe for a blow out? Yup. 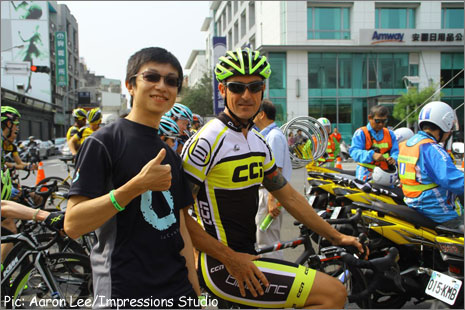 Our hero Lee at the stage start.

OK, excuses over. Whatever is going on, I’m getting more and more tired as this mad race goes on. Tired, like, there’s a fang-toothed parasite the size of a generously-sized lemon scraping the marrow from my bones and then crapping the debris out into the space between my brain and my skull. Mad, because it has been non-stop. And I mean proper non-stop, like real balls to the wall, helter-skelter, plain friggin’ schizoid all week. I think we’ve had one piss-break in 5 days, and even then you were risking it to shake.

It’s like we all really, really hate each other. It’s like we were all terribly, horribly bullied at school and have now decided to wrench it out of our respective psyches in this particular race by distributing our bile out in servings of lung-searing anger measured by pedal strokes. Every cross-wind is welcomed by a gnashing of molars, every hill honored by snarling glances over the shoulder and pulsing, burning speeds up it.

Or is this just how it feels when you’re not going well? They do say everything is relative, thought there is a general consensus that this is a tough old bitch of a tour…

So, let’s get temporal. Stage 1, a 156km crit,. Brilliant result for CCN Cycling Team, my lads. Brilliant, that is, if losing three of your five teammates on Stage 1 of a seven stage race is one of your ambitions.

Yup. Seriously. One lad was unlucky in that there was a media motorbike parked up on the apex of a corner that we had covered on the previous 8 laps or so.
Just. Sat there. Bang. Out.

Then the other guys got DNF, outside the time limit.

I got 18th on the stage in the group sprint. It was a hard and windy day but I felt ok. The signs, personally at least, were encouraging. My Taiwanese teammate Yin Chih Wang also put in a good ride, and I knew I could rely on him to be in the mix later on. Still, two guys left. Not the best start, and not a great atmosphere in the hotel room later…

The winner on the first day was Kirill Pozdnyakov of the Synergy Baku Cycling Project Team.

Day two brought a tough little climb at the end but I, we, had hopes of both finishing in the top ten.

Ah, we can laugh about it now…

But at the time it was akin to smoking 500 Turkish cigarettes, simultaneously. Kirill hung on to Yellow, and I can’t even be bothered to check to see who won, that is how despondent I am. (I laughed out loud when I wrote that, I’m just joking – but I still can’t be bothered to google it). 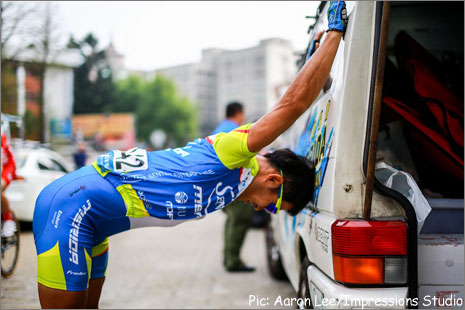 Day 3 was much more fun, I was finding my legs a little and even beginning to believe, like a heffer aboard a truck on the highway passing by open pastures, that things were gonna get better. (Imagine though that the aforementioned heffer is owned by MaccyD’s and is in fact on its way to a date with a bolt gun, and you are, perhaps unfortunately for you, with me).

Anyway, I attacked from the gun, got caught, then attacked again, got caught, sat in, then in the last 40km attacked again and got away, was joined by 5, then another 15, then a few more, and we began barreling to the finish. We were too large a group though to form anything cohesive and so attacks began and tempers frayed, and when United Health Care’s Martyn Irvine attacked I decided to join him, and was soon joined by Chun-kai Feng of Champion Systems. 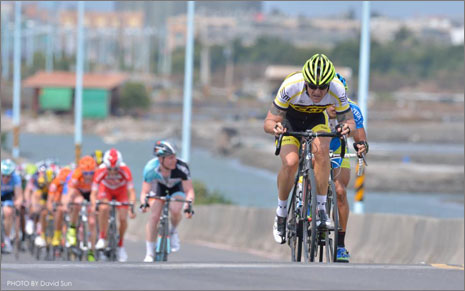 Lee on the attack.

Martyn and I were on the same team last year for a few months and Feng and I have raced together many times in Taiwan so I knew they were both strong as oxen, but when we passed the 20km to go sign I looked over my shoulder and saw the great dirty unwashed that is the peloton surging and frothing like hungry locusts.

Our bones were gonna be picked clean, that much was obvious. I weighed up the options. Another 16km fighting like gladiators only to get swept up and spat out? Or an easy pedal ‘back’ to the pack and an easy ride in?

I took #2. I usually wouldn’t, but I felt the onset of degeneration suddenly. It was like a little hedge, not quite The Wall, more of a leafy speed bump signaling that either I start to conserve from here on in for this race or I might be aboard the Broom Wagon by Stage 6.

So yeah, I chickened back. They got caught of course, and spat out. Kirill kept Yellow, with Drapac’s very able Bernie Sulzberger moving to just one second of the leader. 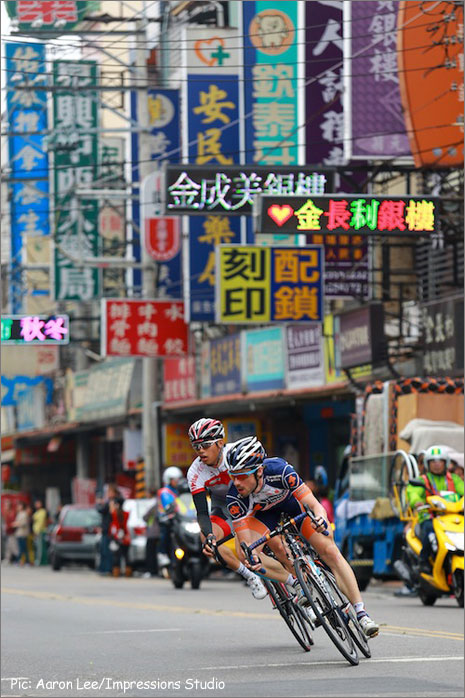 Day four, a 112km stage in and around my adopted hometown of Taichung. I had big hopes here for the finish, in front of some of my friends, but a double puncture within the space of 500m just 40km after the start put paid to those. The pack was, as had become habit, kicking the crap out of itself with a never-ending series of attacks that meant for me a 15km chase back through the car convoy.

Brutal. It was all exacerbated by the fact that, because we only have 2 riders, our team time is always last (as it is counted on the first three riders of a team) so it took an age for the car to arrive for the first flat, and then when I had the second, the car had sped ahead. The sight of the mechanic running back 100m to me in a state of panic with a wheel held above his head though was pretty amusing though, I have to say…

Sulzberger though had a corker of a day, taking off from the pack on a wet descent with a few guys and joining two teammates up ahead to take the race lead by 28 seconds. Great ride.

(Disastrous though for Irvine, who fell and broke his hip. He’s genuinely very popular within the peloton and very humble, despite recently claiming a World Championships jersey on the track. Everyone was gutted for him and we wish him all the best.). 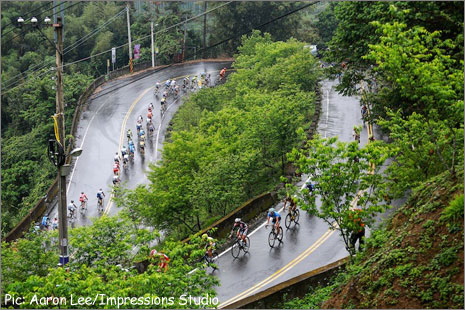 Day 5, finally (I really need to go to bed here!). Had a crack at the start but got chased by an ex-teammate with whom relations could be better, which in turn triggered a reaction from the rest of the pack and so put paid to my bid for TV Time, then sat at the back til the last 15km wondering why I don’t spend more time there. It’s kinda peaceful back there, though you do feel just one or two accelerations from trouble. Still, way less stressful than up front. 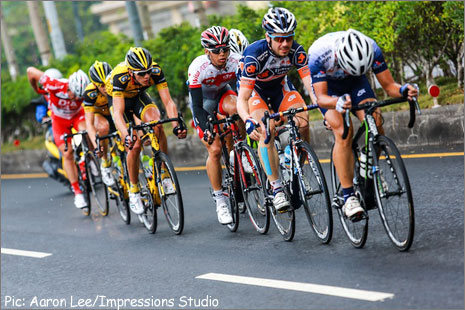 The ink on the tape on my top tube upon which was written the race distance had run, and the ‘6’ in 126 kind of looked like a ‘3’. But it was – most definitively and unarguably – a 6.

Rather wonderfully though the stage winner was Tsgabu Grmay of MTN-Qhubeka, who became the first Ethiopian to ever win a stage in a 2.1 UCI race. (I might be wrong, but I also think he is the first black African to do so too, which is also rather wonderful). So I was there when history was made. Yes, maybe my ass was served to me medium-rare on a bed of crushed dreams, but I was there, dammit.

Sulzberger retained Yellow, which he now holds by 27 seconds from Grmay. Tomorrow we wake up at 5:30am to go kick the living nuts out of each other once again. I’m weary, on the verge of a breakdown I think, physically.

Just joking! I love these guys. No, really.

No. Nah, I do really. I mean, who else in this world understands why we need to do this…!