Race Report: Ed Hood told us last week, even before Flèche Wallonne, that Alejandro Valverde would win ‘La Doyenne’ on the steep finish to Ans. It was a battle of cat and mouse between Katusha and the man from Murcia, but ‘Balaverde’ was top man. Here is how Ed saw the race unfold.

On a wet Sunday afternoon in the dismal retail park in the Liège suburb of Ans, Alejandro Valverde (Movistar & Spain) celebrated his 35th birthday a day late but in great style – closing down Dani Moreno (Katusha & Spain) when it looked the man from the Russian team had a big enough gap to win, then leading the sprint out all the way to win from the revelation of the Ardennes Week, 23 year-old Julian Alaphilippe (Etixx – Quick-Step & France) and Joaquin Rodriguez (Katusha & Spain). 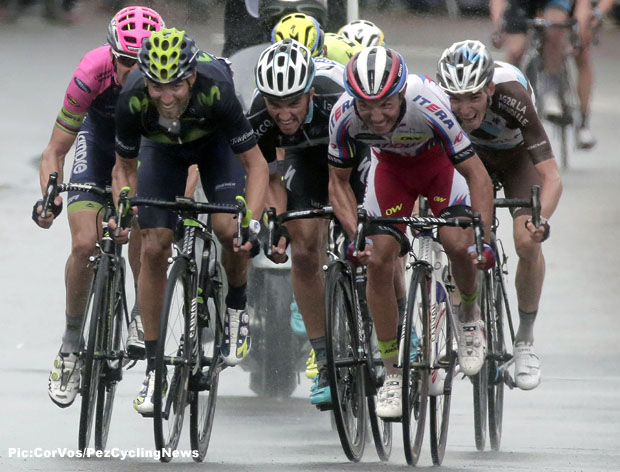 Valverde hit the front and stayed there to the line

Valverde adds the 2015 La Doyenne to the 2015 Flèche Wallonne which he won just four days ago to confirm his status as one of the world’s best and most consistent professional riders. But Roman Kreuziger (Tinkoff-Saxo & Czech Republic) must be ruing a late escape which burned up so many watts but still left him with enough in the tank for fifth spot.

The sun was shining some six-and-and-quarter hours earlier…
There are 253K to ride, 10 major climbs to negotiate and hardly an inch of road which doesn’t go up, down, left or right – she may be a Doyenne but she’s a nippy old girl.

Vergaerde is an interesting one, just 20 years-of-age he’s European Scratch Race Champion and a Worlds Madison bronze medallist in Paris with Jasper De Buyst – two of the ‘new wave’ of Belgian track flyers. Ulissi is a quality guy too; a double World Junior Road race Champion but not long back from suspension for having too much salbutamol in his system; albeit he has an exemption to use a Ventolin inhaler – but there’s little room for ‘reasonable doubt’ when it comes to tests these days. And perhaps that’s no bad thing. 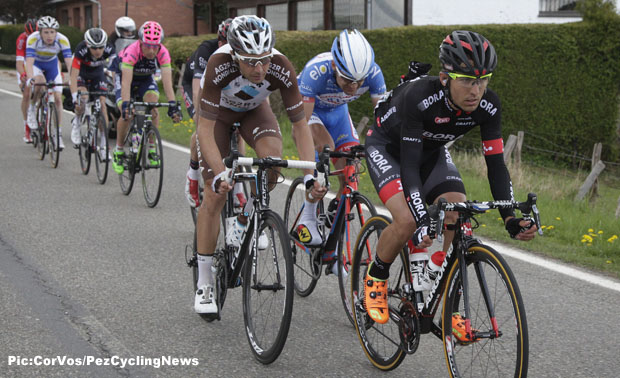 The break of the day led by Casare Benedetti (Bora-Argon18)

And zoooom – it’s eight minutes; that’s too much, too quick – who’ll blink first back in the peloton Europcar. Pierre Rolland’s head will be good after that Vuelta a Castilla y Leon win – the legs? That one will be answered at Ans.

That’s the first cote down with nine to go – Côte de La Roche-en-Ardenne with the break at five minutes; that’s safer, the peloton will be happy to keep it at that – we have 160K plus to go. Bastogne with the gap down to four-and-a-half minutes; this is the ‘turn’ – just like a British time trial, well maybe not. . .

The halfway point
We’re around half distance and the gap is four minutes, the climbs on the way back make this one hard bike race with an absolutely brutal finale. Côte de Saint-Roch, the second climb and the gap is under four minutes as they head ever north – the Côte de Wanne is next.

And the adventure is over as the break begins to fragment on the Wanne; five now as Astana lead the chase, seven of the boys in baby blue doing a job for Vincenzo. His henchman Grivko scoots off the front and heads for the break – to take the presh off his Capo. Izagirre does the same for Valverde (Movistar) as does Yates for Albasini (Orica-GreenEDGE) they catch the break, others get across and we have a group of maybe 20/24 at the head on Côte de la Haute-Levée.

There’s an ebbing and flowing in the front group and finally we have five away on the Col du Rosier, Michele Scarponi and Tanel Kangert (Astana), Esteban Chaves (Orica-GreenEDGE), Julian Arredondo (Trek Factory Racing) and Manuele Boaro (Tinkoff-Saxo). But the latter two can’t keep pace with the two rampaging Astanas – they’re serious today as the three now motor out to 50 seconds plus ahead of a dwindling, Movistar powered peloton.

40 kilometres to go
The Col du Maquisard is next and the Astana boys don’t miss a beat out there as the race proper starts – 41K to go, the last hour of racing. On the run in to La Redoute there’s a big crash with Nico Roche (Sky), Dan Martin (Cannondale-Garmin) and Simon Gerrans (Orica-GreenEDGE) on the deck whilst the three banditos hit the famous climb with 20 seconds lead as Etixx – Quick-Step power the chase. And Gerrans goes down again – sore, sore, sore.

Nibali is there, Kreuziger (Tinkoff-Saxo), Rodriguez (Katusha), Stybar and Kwiatkowski (Etixx – Quick-Step), Gasparotto (Wanty-Groupe Gobert) – they’re riding tempo up the famous climb which used to be the decisive section of the parcours. But that comes later – that horrible grunt up to Ans and the red kite.

Kangert has popped leaving just Scarponi and Chavez out front but on borrowed time as Katusha and Movistar lead the chase for Rodriguez and our tip for the top – Valverde. It’s gelled a little on the fast run off La Redoute and we have maybe 40/50 riders in the bunch coming into the last 20 as Katusha drill it – the break is toast and we’re onto the penultimate climb, Côte de la Roche-aux-Faucons.

This one is a steepy as Katusha, Movistar, Tinkoff-Saxo and Astana are all to the fore but no one is full gas – and it’s Kreuziger (Tinkoff-Saxo) who attacks and now has Caruso (Katusha) as his shadow – the little Italian won’t spell the Czech; it’s all about Rodriguez for the Russians – or maybe Moreno?

Fuglsang gets across to the two escapees with another five en route – Alaphilippe (Etixx – Quick-Step), Moreno, Valverde, Costa but as quick as it splits, it merges again leaving the three clear. Tommy Voeckler (Europcar) shows face; the three up the road are spelling and the gap is 22 seconds with Stybar chasing for Kwiatkowski on wet roads. 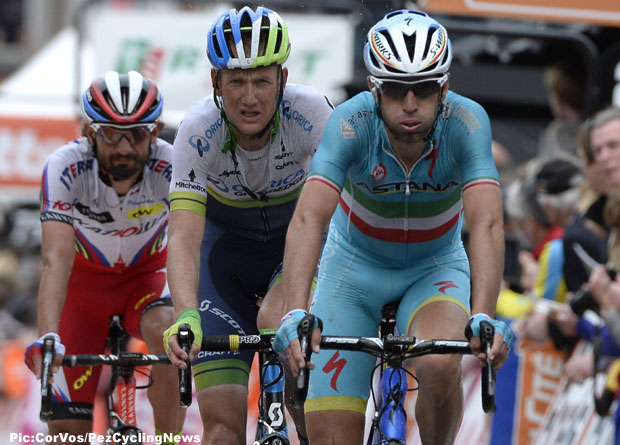 Vincenzo Nibali put in an attack but paid for it later

The Côte de Saint-Nicolas
Stybar is bestial in pursuit as the gap slides to 10 seconds and they the hit Côte de Saint-Nicolas – Stybar pops, no surprise, he’s worked hard. Gilbert has gone, Voeckler too Nibali and Kwiatkowski (wow!) – Caruso leads, Alaphilippe and Kreuziger is still there – he shouldn’t have made that move, he’s so strong. Bardet goes for AG2R – too early; and still Caruso drives for Rodriguez as Nibali gets back.

1K to go
Red kite and Moreno is clear – well clear, he could win this? But Valverde counters as Rodriguez goes with him – Moreno pops; Valverde is having to commit from a long way out as they bank left into the finish straight. Valverde leads all the way home – a beautiful win. The remarkable Alaphilipe barges Costa out of the way, rounds Rodriguez and takes second with Costa fourth and Kreuziger fifth – if only he hadn’t wasted all those watts. 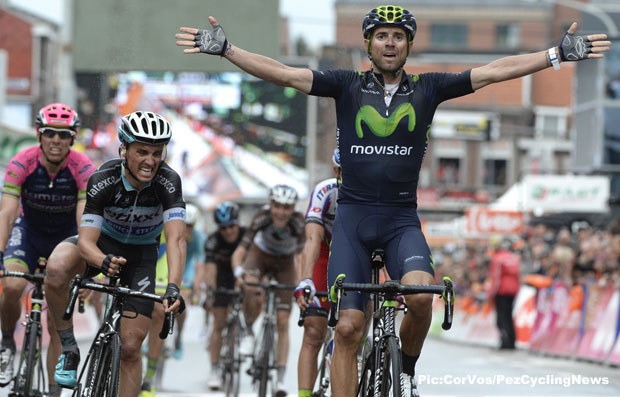 The Green Bullet hit the mark

And we must mention in dispatches MTN-Qhubeka’s young South African, Louis Meintjes who was right there with the ‘Bigs’ until the final sprint, respect!