As the spring season comes to an end, the ‘Old Lady’ of the Classics pushes out of Liège on Sunday for the return journey to Bastogne and the many Ardennes climbs between the two Walloon towns. Ed Hood runs through the course and running and gives us his winning tips.

Luik – Bastanaken – Luik they call it up in Flanders; Liège – Bastogne – Liège down in French speaking Wallonia – ‘La Doyenne’ is her Sunday name, afforded to the most senior and respected lady in the Monuments Salon. Milan – San Remo is longer; Paris – Roubaix is crazier and Lombardy is more beautiful, but Liege is the oldest – first run as an amateur race in 1892 – and arguably, the toughest. 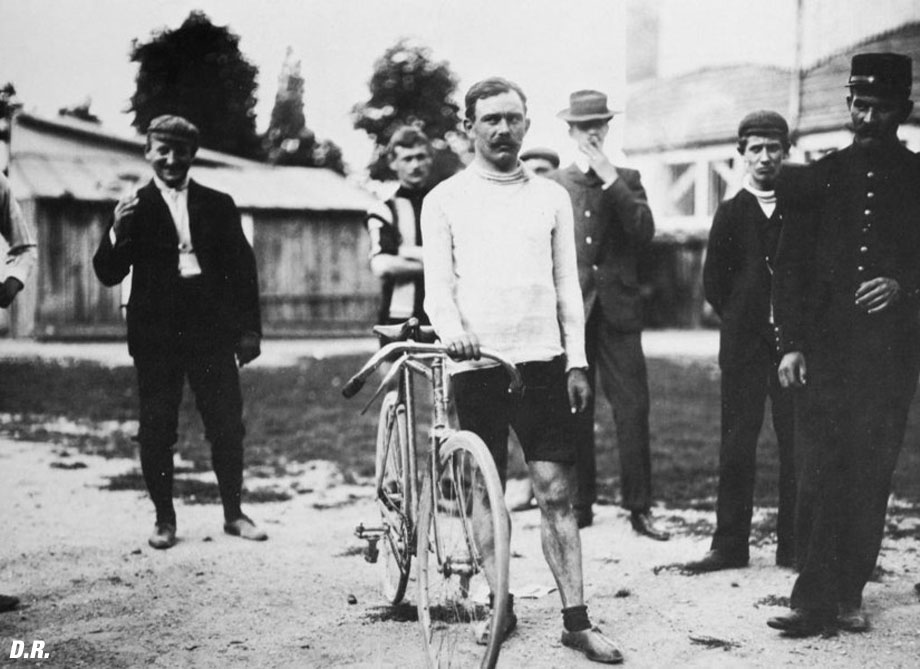 The route does as it says on the tin; south out of Liège (main town of the province which bears its name) to Bastogne (rather confusingly situated in the Belgian province of Luxembourg) and back again to finish at a disappointing and drab retail park in the Liège suburb of Ans – which happens to be at the top of an endless drag past defunct factories, mine workers’ houses, shops and garages.

The parcours have changed over the years with no early categorized climbs; the first major joust with gravity is the Cote de la Roche-en-Ardenne which doesn’t come until 78.5 kilometers in. The second is the Cote de Sant Roch at 125K with the final eight categorized climbs coming between 168k and the finish at 253K – that’s one every 10 kilometers to the finish. This has the effect of making the tail end of the race profile look like an advert for high quality timber hand saws; if there’s a ‘flat bit’ on this course, then it’s hiding somewhere in the 253 kilometers of lumps and bumps which make up the 102nd edition of the last classic of the Spring season. 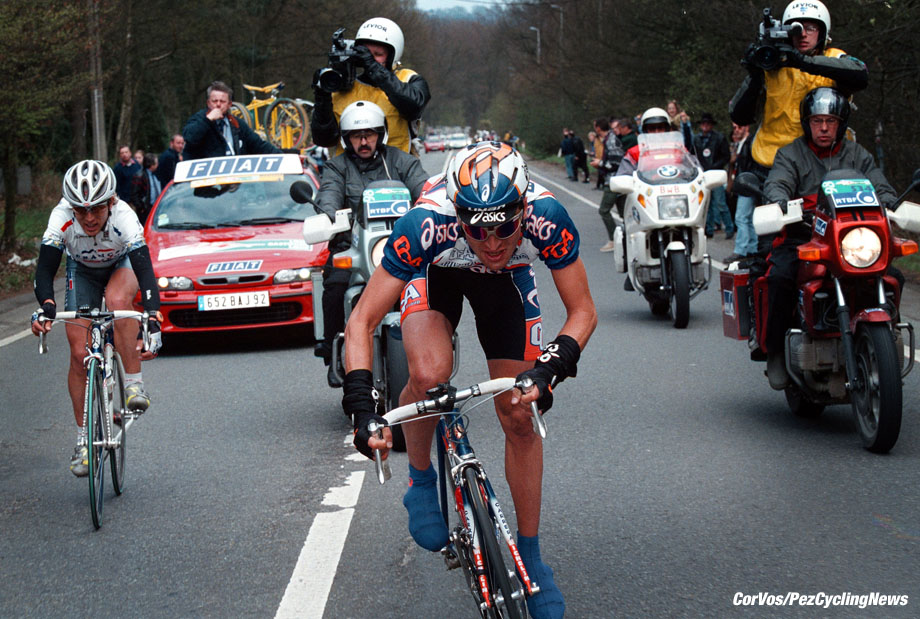 Back-to-back winner in ’97 and ’98 and one of the coolest riders: Michele Bartoli

The names of the other climbs are familiar, Haute Levee, Roche–aux-Faucons, to name but two – there are 10 classified in all but little of the parcours is flat – and of course there’s La Redoute. La Redoute used to be where the winner would make his move; but in these days of riders peaking for just one or two races each in a season and the difference in the top rider’s conditions minimal, it’s no longer decisive albeit it’s still a great place to watch the race with huge crowds, giant screen TV, bars and barbecues. All told there’s more than 4,000 meters of climbing in the race – as much as a Grand Tour mountain stage. 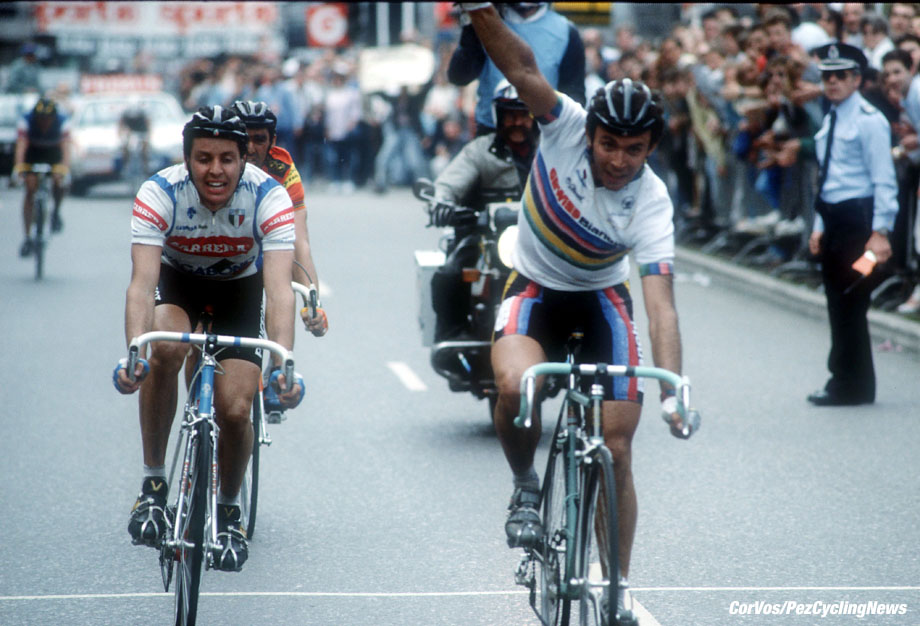 ‘Back in the day’ L-B-L used to run back to back with the Flèche Wallonne, the two races were known as the ‘Weekend Ardennais.’ Only the best riders of their respective generations have won both races in the same season; Ferdi Kubler (Switzerland) twice 1951 & 1952, Stan Ockers (Belgium) 1955, Eddy Merckx (Belgium) 1972, Moreno Argentin (Italy) 1991, Davide Rebellin (Italy) 2004, Philippe Gilbert 2011 and Alejandro Valverde twice 2006 and 2015. 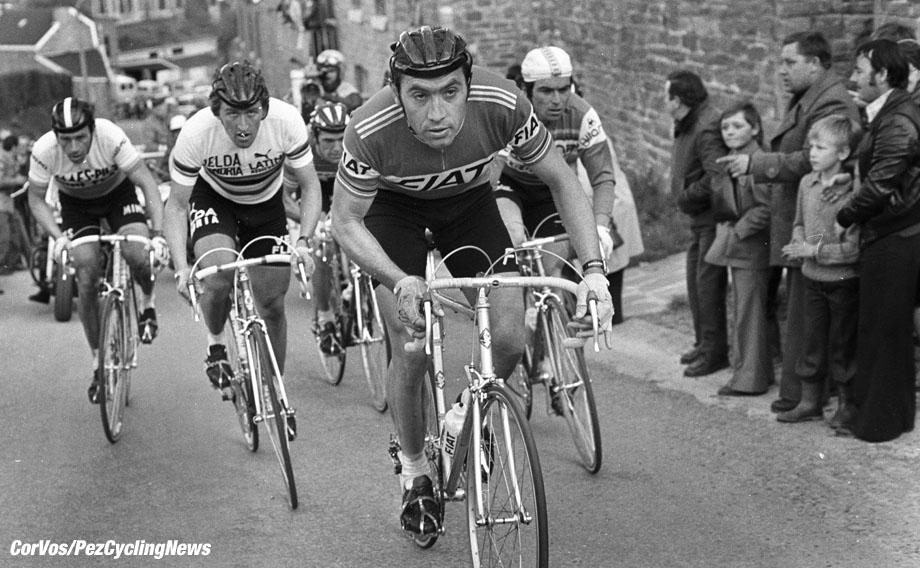 Eddy Merckx wasn’t at his best in 1977, the young rider on his left took the honors. Bernard Hinault won again in 1980

Unsurprisingly, ‘Big Ted’ – as we named Baron Merckx back then – is the ‘record man’ on five wins with the classy Argentin on four. The Belgian also holds the record for top 10 finishes, a feat he achieved on 10 occasions. The fact that four of the ‘doubles’ were completed in the last few years says much about the changes in pro cycling. Merckx would charge through the early season from Milan – San Remo (which he won seven times) to the Amstel – which closed the Classics season back then and which the Belgian won twice – without missing a beat.

In this millennium, such a thing would be out of the question as riders specialize in cobbled, sprinters’ or Ardennes Classics. 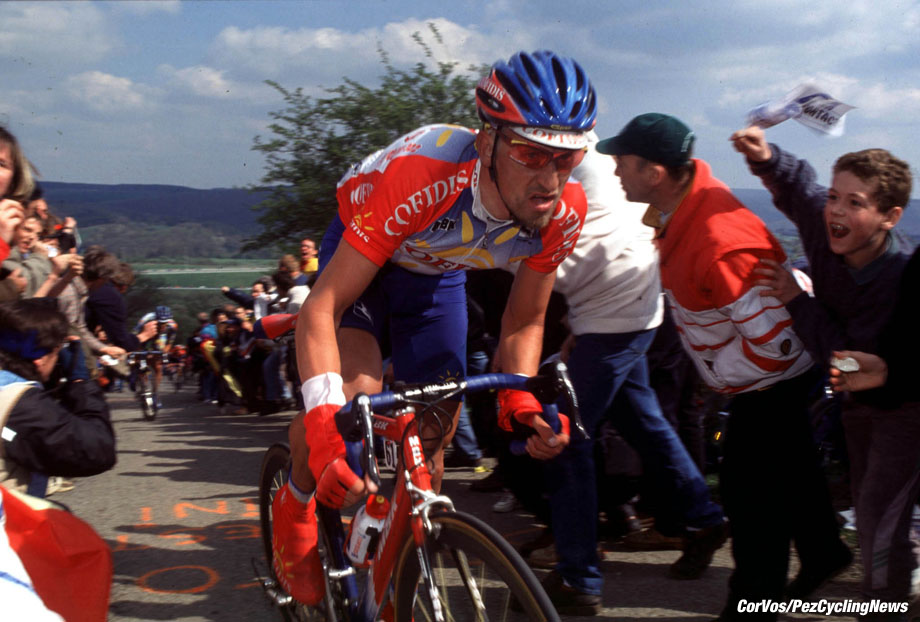 And on the subject of riders, here’s our top dozen. . .

Julian Alaphilippe (Etixx – Quick-Step & France): the young Frenchman was the sensation of the Ardennes last year, seventh in the Amstel then second in both the Flèche Wallonne – which this piece goes to press prior to – and in La Doyenne. Despite the Amstel finish not entirely suiting him he was sixth this year and was instrumental in team mate Vakoc’s win in the Flèche Brabançonne where he hung on to take eighth himself – he’s ready. 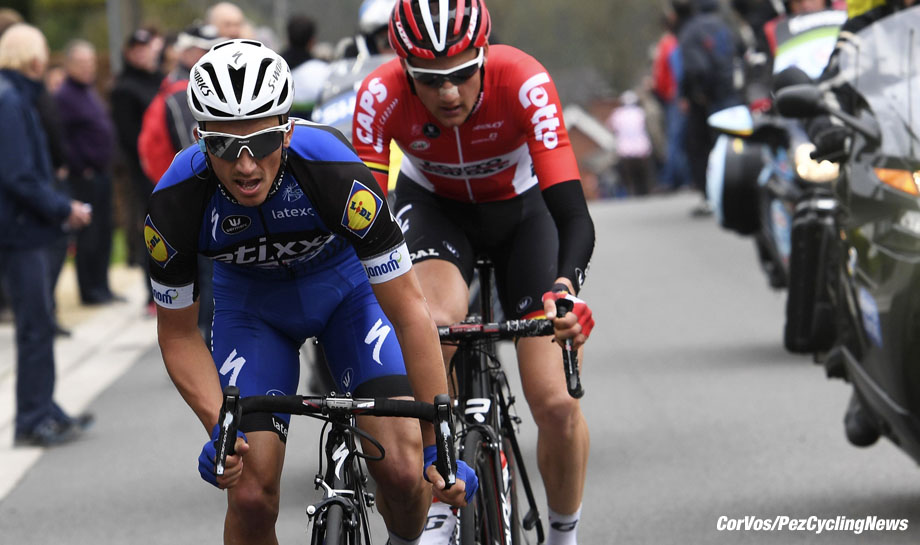 It could be time for the young Etixx climber

Romain Bardet (AG2R-La Mondiale & France): was sixth in 2015 but from sixth to the podium is a big lead – and from the podium to the win is the Grand Canyon. His form this year hasn’t been scintillating but he’ll be trying to bring the pot to the boil for Sunday afternoon in Ans – he’s certainly skinny enough. 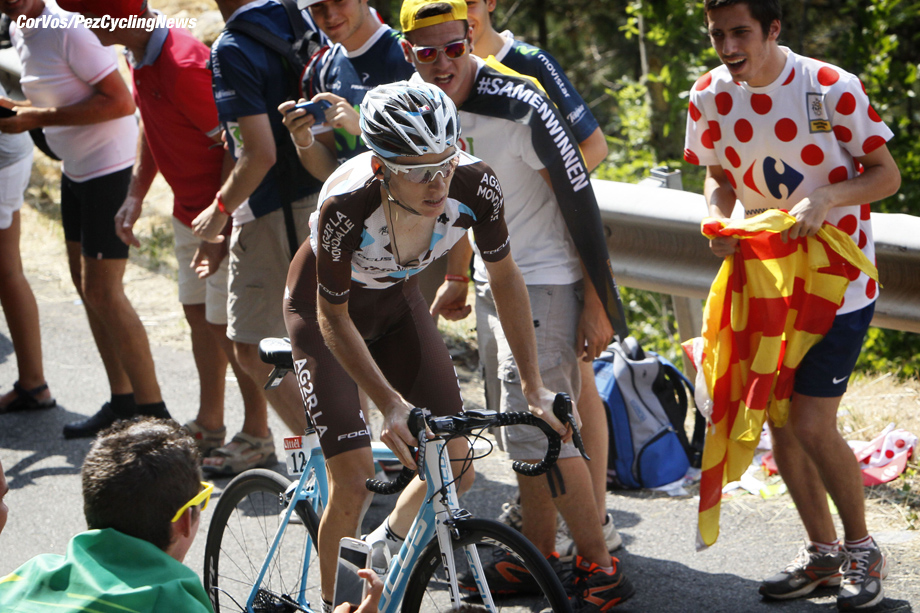 Bardet: An outside bet?

Rui Costa (Lampre-Merida & Portugal): fourth last year and notching up some nice top ten placings this year, as with Bardet this will be his first major goal – and he wasn’t world champion for nothing. 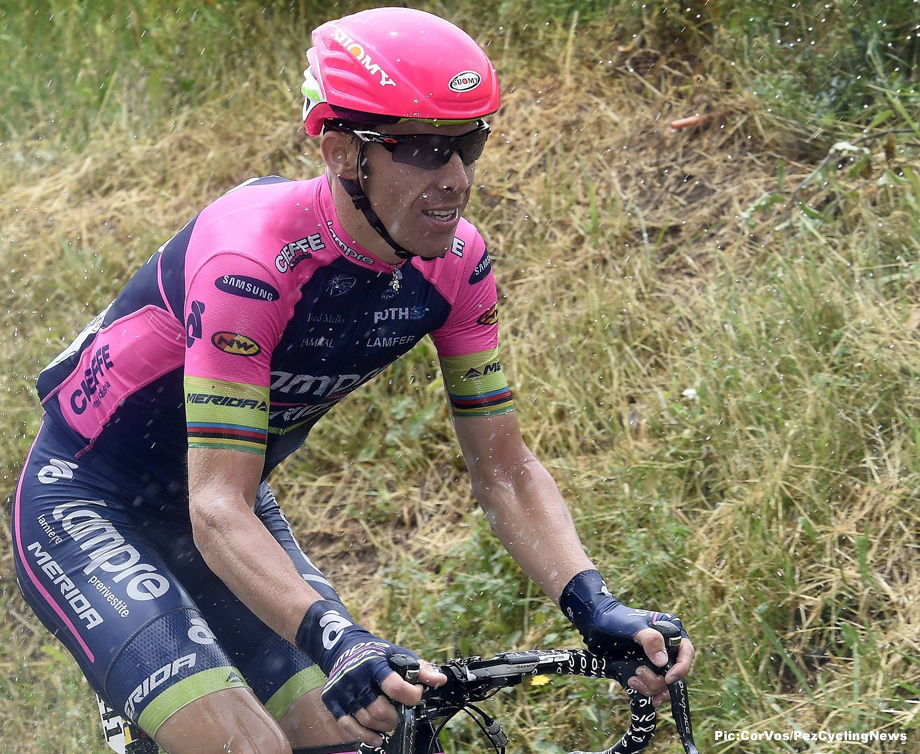 It’s about time Rui Costa had a big win

Christopher Froome (Sky & GB): the double Tour winner tackles a Classic – ‘attention must be paid’ as Arthur Miller might have said upon seeing him on the start sheet. All those vertical meters will certainly suit him. . . 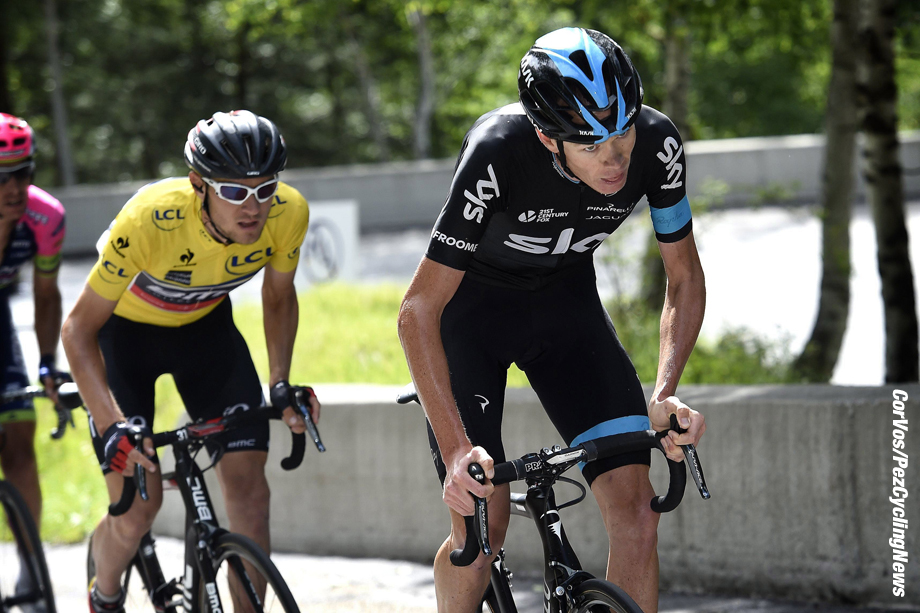 Chris Froome is not a one-day Classics rider, but you never know

Simon Gerrans (Orica-GreenEDGE & Australia): won this race in 2014; he was 11th in the Amstel this year and is a master of ‘bringing it home on the day.’ With a win, 6th, 10th and 11th in Liege he’s the third most successful competitor after our next choice and a Spanish guy we’ll deal with later. 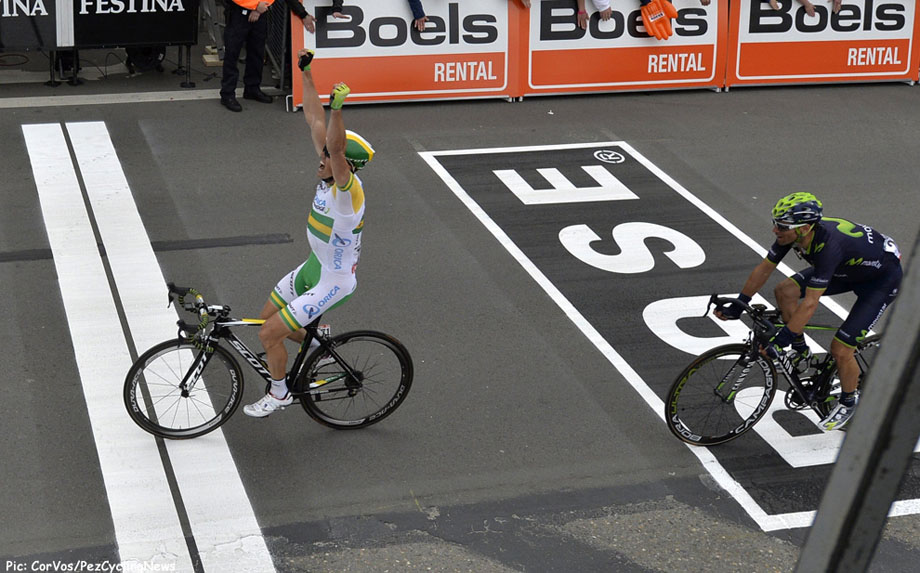 Another Classic for Orica would be cool

Philippe Gilbert (BMC & Belgium): as just stated, the race’s second most successful participant with a win in 2011, sixth, 10th, 11th and 12th on the board. There’s a ‘but’ – whatever it was actually occurred between him, his training partner and a motorist(s) a few days back has left a mark on his physical and mental condition and only the best at their best can win a Monument. 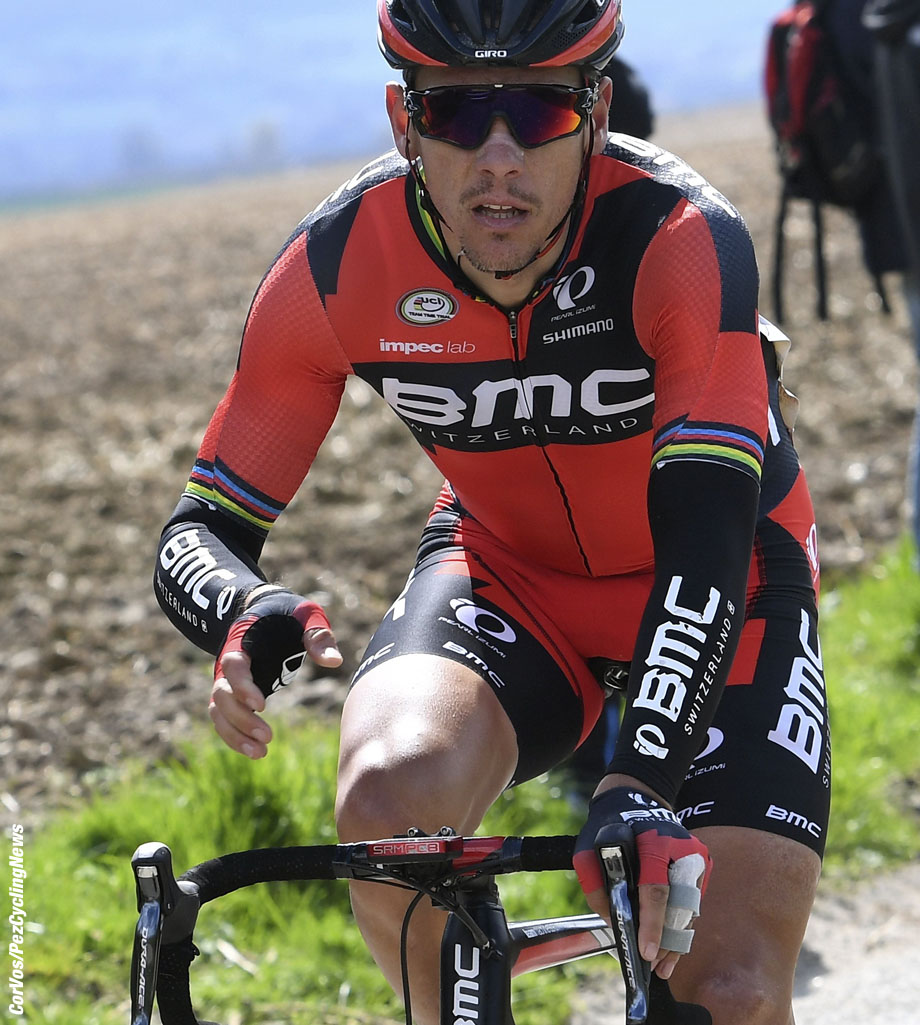 Michal Kwiatkowski (Sky & Poland): the ‘Kwiato’ who won the E3 in such fine style ahead of Peter Sagan took the day off in the Amstel – we were a little shocked to see the cameras linger on his progress backwards and out of contention. Perhaps it was a bad day but it won’t have helped his head for those 10 climbs on Sunday. 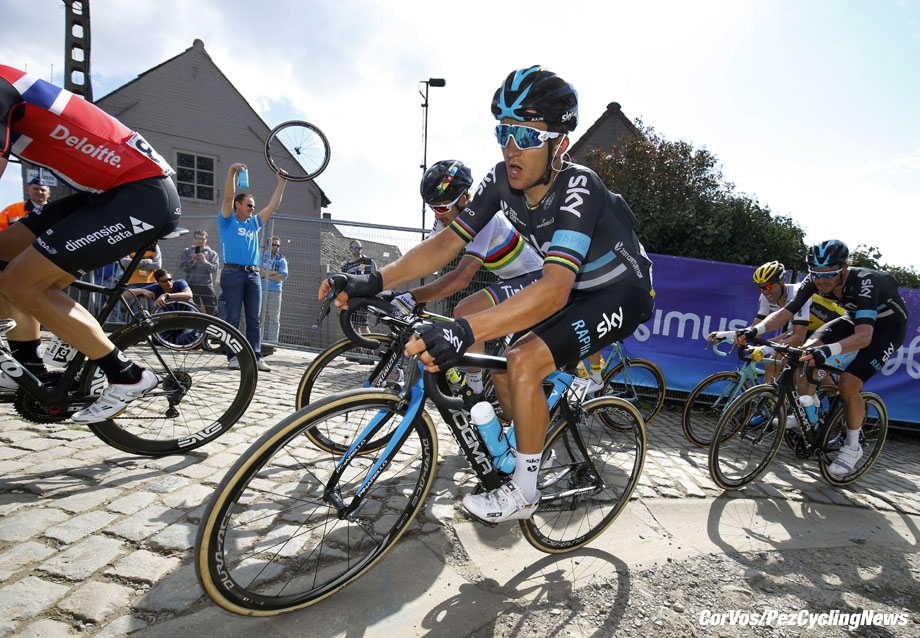 Has ‘Kwiato’ gone off the boil?

Dan Martin (Etixx – Quick-Step & Ireland – or should that be Birmingham?): won here in 2013 and was on the cusp of winning the following year when he went down on the last bend. He has two good wins under his belt already in 2016, he skipped the Amstel to be at his best for the Flèche and this one; the team needs it badly to quieten the doubters and we think Dan can do the needful at least once. 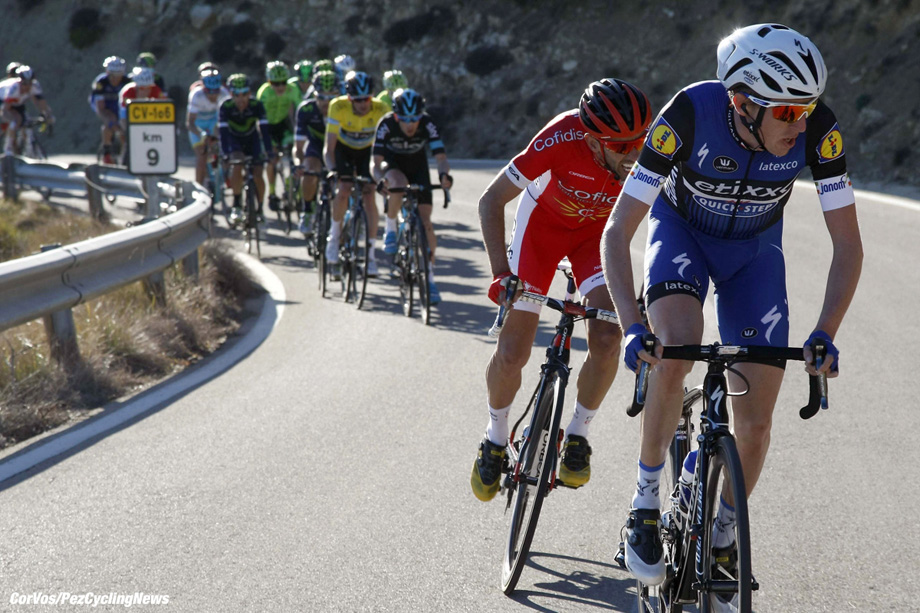 Etixx could do with the win; Dan Martin has won here before

Louis Meintjes (Lampre-Merida & RSA): was 11th last year and whilst this year there’s been little to write home about we just have a feeling. . . 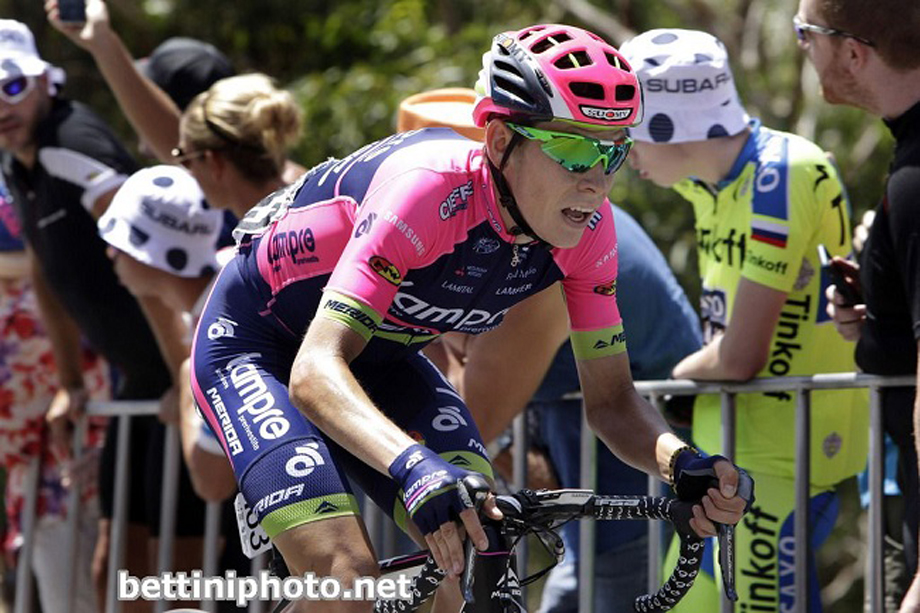 Louis Meintjes has been quiet so far this season

‘Purito’ an outside bet

Samuel Sanchez (BMC & Spain): another ‘oldie but goodie’ but unlike Rodriguez the form is good, a cheeky stage win in the Pais Vasco was backed by another three top ten finishes and sixth on GC – he’ll be there come Ans. 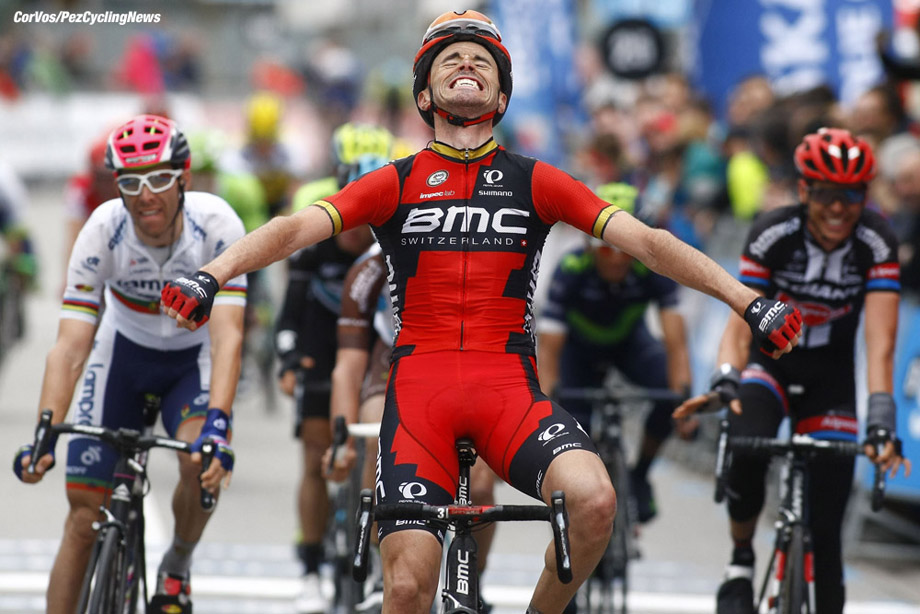 Samu has the form

Alejandro Valverde (Movistar & Spain): has won here three times, been second twice and third once – that would be ‘enough said’ except he’s just won two stages and the GC in the Vuelta a Castilla y León. He’s hard to bet against but if it’s anyone else it’ll be Alaphilippe or Martin. 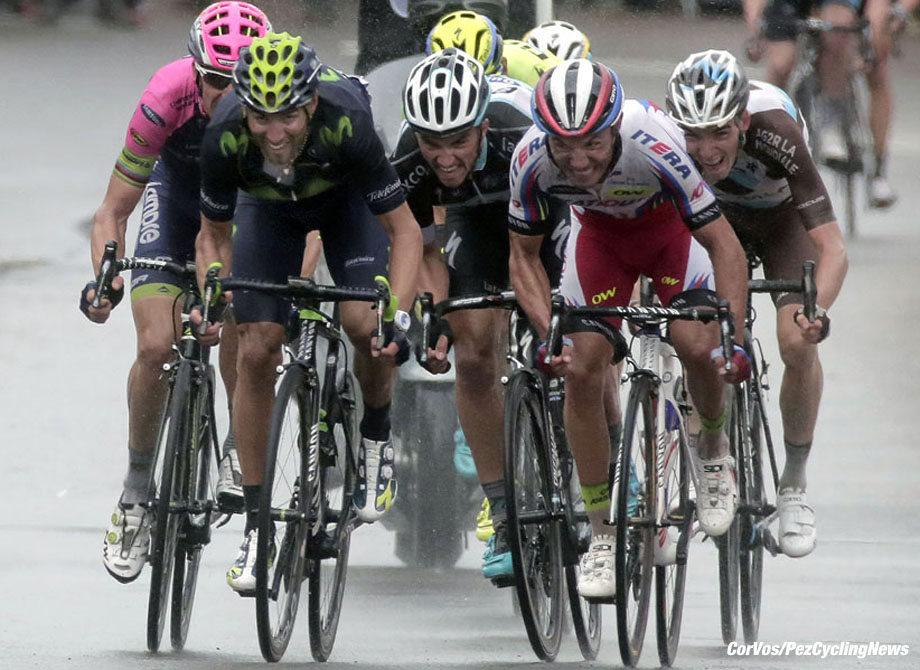 Valverde made it three Liège wins in 2015, another this year?

As to what to drink during Liège: The big brewery is Jupiler, but for something special, it would have to be the from the Cistercian Abbey du Val-Dieu a few kilometers east of Liège. Val-Dieu brews a blonde, a brune and a tripel, the Triple is quite ‘interesting’ at 9.0%.

Stay PEZ for the race report on Sunday, plus the catch-up on Monday with EuroTrash and a Photo Special. For live TV tune into SteephillTV.com. 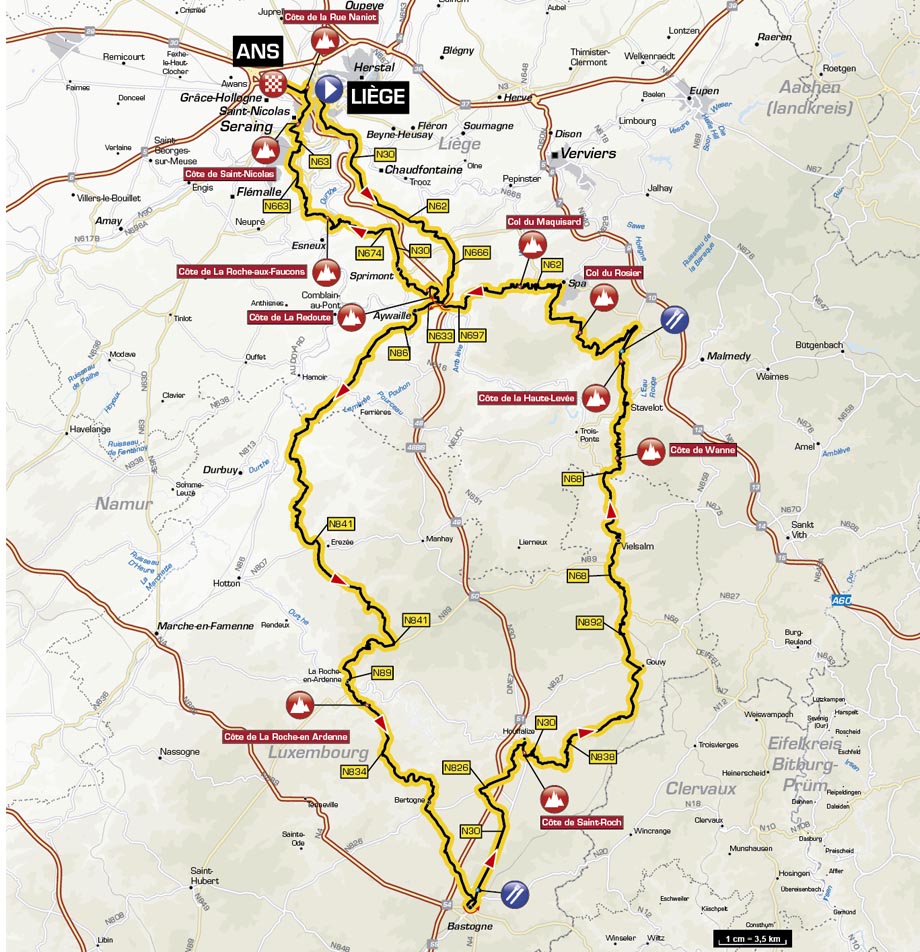 It was November 2005 when Ed Hood first penned a piece for PEZ, on US legend Mike Neel. Since then he’s covered all of the Grand Tours and Monuments for PEZ and has an article count in excess of 1,400 in the archive. He was a Scottish champion cyclist himself – many years and kilograms ago – and still owns a Klein Attitude, Dura Ace carbon Giant and a Fixie. He and fellow Scot and PEZ contributor Martin Williamson run the Scottish site www.veloveritas.co.uk where more of his musings on our sport can be found.
Like PEZ? Why not subscribe to our weekly newsletter to receive updates and reminders on what's cool in road cycling?

The Giro dell’Appennino goes to Firsanov