Race Report: As a former Colombian track champion it was obvious that Rigoberto Uran (Cannondale & Colombia) would be fastest of the three desperados raging into the Bergamo finish line at the end of the 110th Lombardia – but no one had told his smiling countryman, Esteban Chaves (Orica) who took the win ahead of ‘man of the match’ Diego Rosa (Astana & Italy) with Rigo third.

Diego Rosa worked hard for his Astana Capo, Fabio Aru before the Sardinian conceded that it wasn’t his day and unlocked Rosa’s ball and chain. But there’s only one winner and it was Chaves, making history as the first Colombian to win a Monument. 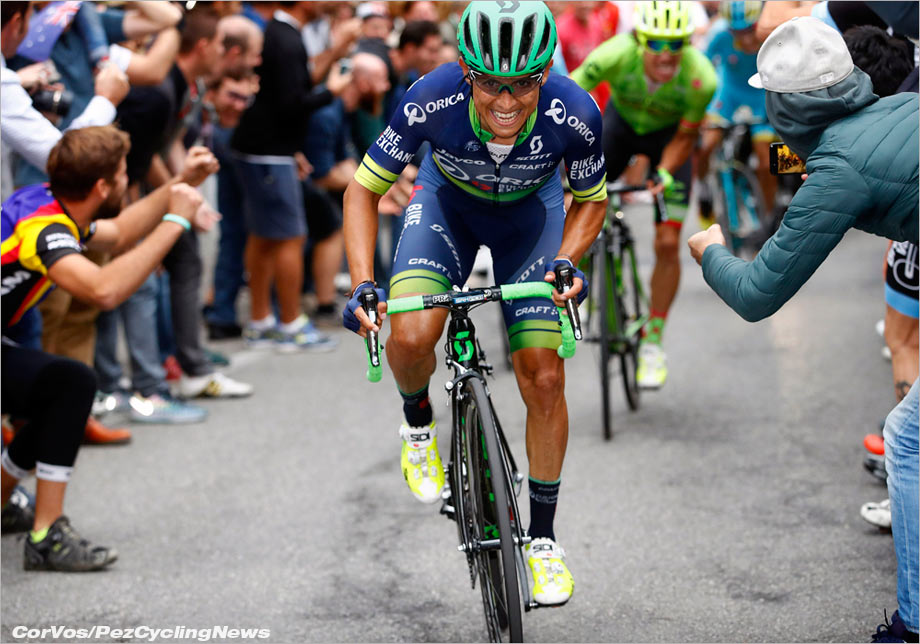 The last Monument of the year and the most beautiful. 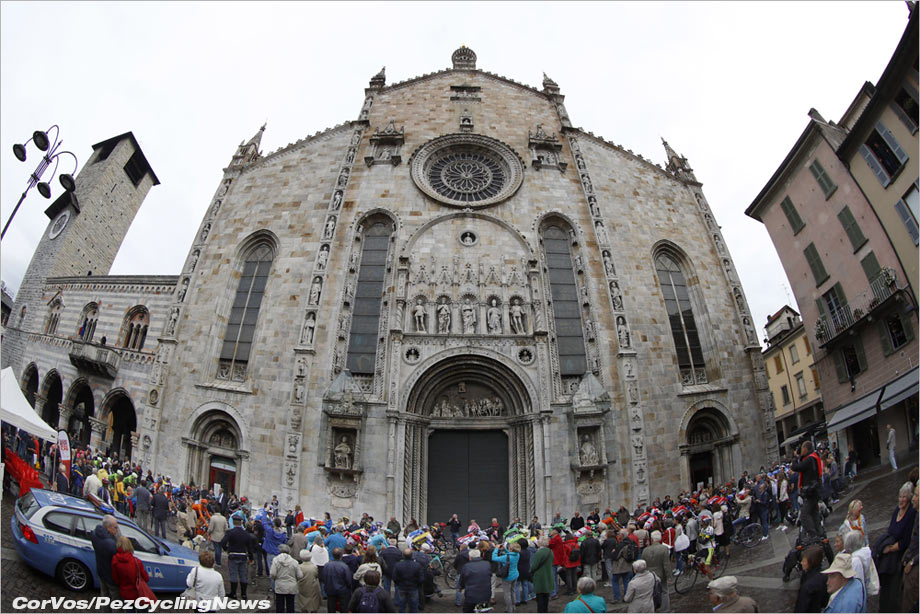 This year’s corsa starts from the duomo in Como, under cloudy skies.

The Ghisallo tops out at just 65 K – so a long way to go for the desperados. 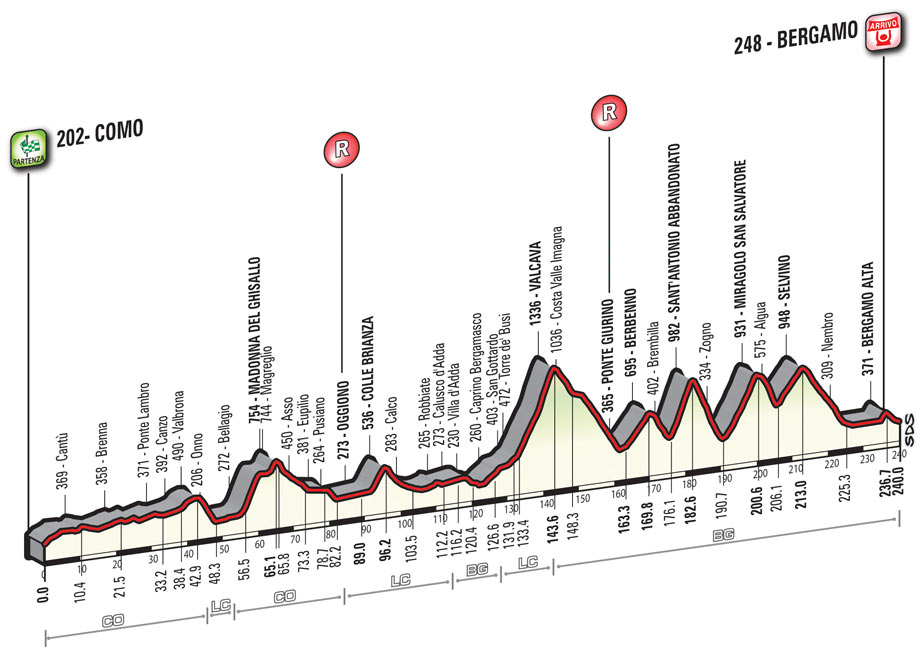 The quartet stretched their lead to a maximum of some six minutes, topping the Brianza climb together but splitting on the tough ascent of the Valcava, the summit of which coming with around 100 K to go with just Caruso and Molard surviving carrying a three minute plus lead.

On the Berbenno climb the shape of the race was the two still clear with Jan Bakelants and Mickael Cherel (AG2R) and Romain Hardy (Cofidis) in between the break and bunch – Cherel having been picked up by the AG2R boys.

But on the Sant Antonio Abandonato climb the status quo became Caruso alone at the head with three minutes and Molard sliding backwards to a group of around 40 ‘Bigs’ all waiting for that last hour – which IS the race. 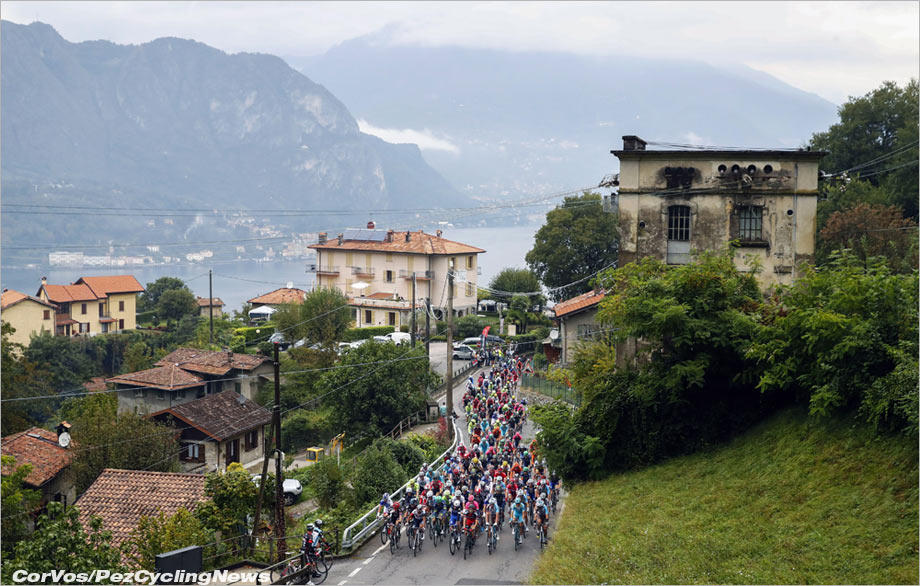 The lower slopes of the Ghisallo climb reveal stunning views to Bellagio in the distance, and offer a shout to our friends at Hotel Il Perlo – situated perfectly on the climb.

It’s a big drop off the Abandonato so Caruso should survive into the next hill, the Miragolo San Salvatore.

The main group splits, and as Valverde (Movistar) and Atapuma (BMC) go forward, Martin and Alaphillipe (Etixx) and Landa (Sky) go backwards – they’re knocking lumps out of each other as we pass the 57 K to go point.  Caruso is off the summit, dropping like a crazy man – then Molard, followed by a group lead by Gesink (Lotto) with Chaves and Bardet coming across.

Caruso at inside 50 K to go now with two minutes on the Gesink group and three on the main group as the race hits the San Salvatore.  The chasing group is strong; Gesink, Rosa and Aru (Astana), Chaves, Bardet, Barguil (Giant), Valverde, Visconti (Movistar), Brambilla (Etixx)– as Latour (AG2R) fires out of this group in pursuit of Molard.

Those brown and blue boys are serious this day, Bardet must feel good – that group looks like the winning move.  Uran (Cannondale) and De Marchi (BMC) have bridged too – even more horsepower.  Latour comes back to them so we now have Caruso then around 15 maybe 16 quality chasers. 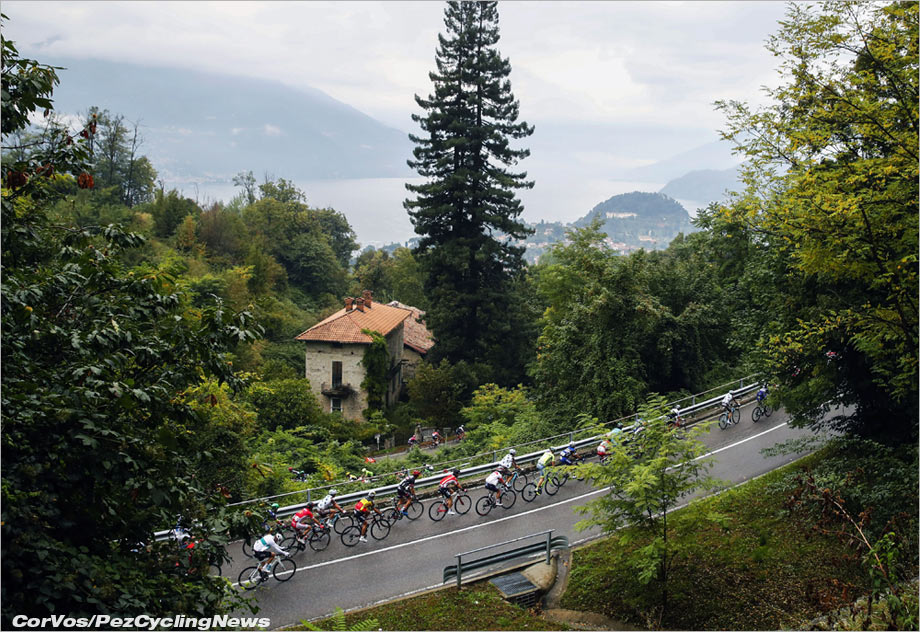 The climb of the Madonna del Ghisallo is an iconic part of the race, but today came far too early to be a factor.

Villella is there too for Cannondale so we have a lead group of 15 heading for the Selvino climb once we top out the Salvatore.

Rosa is setting the tempo for Aru – nice to see Torres in there for the ‘little guys’ as they drop off the Salvatore, it’s technical – no ‘easy bits’ in this race.  Brambilla is harrying the TV motorbike and stretching the group, the little Italian is ‘gallus’ as we say in Scotland.

Chaves goes hard at the base of the Selvino (read the PEZ-Report on this climb here), Bardet and Uran cover the little Colombian as Gesink and Visconti find reverse – Rosa and Aru lead the chase but get no help from Villella who’s marking for Uran.  Bardet, Chaves and Uran are spelling nicely; Aru has given Rosa freedom to chase, it’s not the Sardinian’s day – it’s looking like the race belongs to the attacking trio but the roads into the final climb to Old Bergamo are flat and perhaps a chase can be organised ?

Rosa bridges, four up front now with Chaves looking so strong – off the climb now, it’s a long drop then some flat before the final brutal snap to the line.  Uran drops a little distance on a bend but soon gets back, they have 43 seconds now and are spelling, committed as a Russian TTT squad with the fire out of the chasers.

Inside 10 K to go and it’s a four man race, if Chaves can’t get rid of Uran on the climb to the old Alta (High Town) then it’ll be Rigo’s race – the Cannondale man was a trackman originally and is rapid.

There’s five K to go with Rosa first to attack, Chaves covers as they hit the cobbles – off the cobbles, four K to go and it’s steep. Chaves now, with Rosa toiling – Chaves gets a gap but Uran is on him as Bardet pops.

They’re on the short last descent now as Rosa gets back to them with Bardet chasing like a mad man.  The trio are into the last 1500 metres now with Rosa taking a flyer early – red kite. 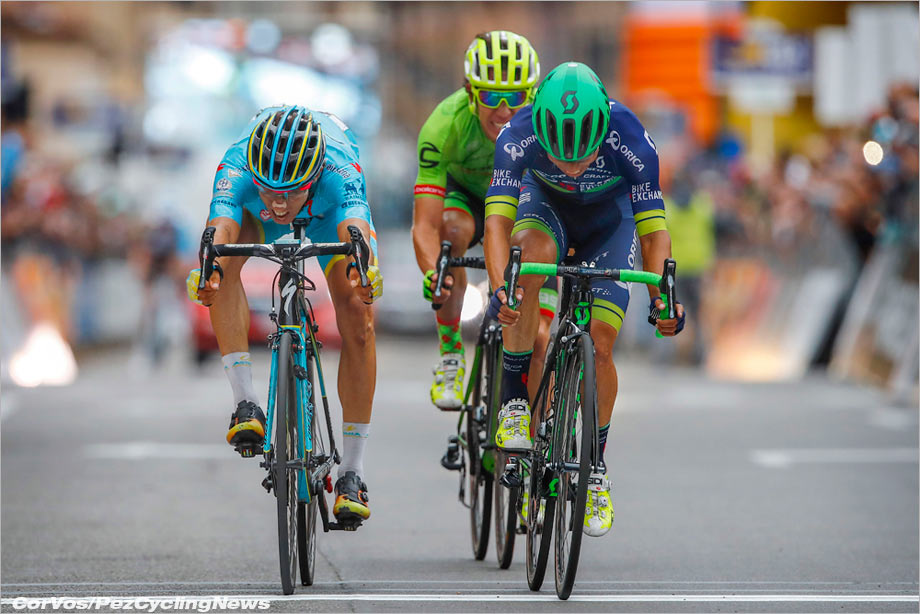 The little Colombian mustn’t have read the script that Uran is quicker – two Grand Tour podiums and now a Monument, not a bad season for him.

Rosa is man of the match in second with Rigo third and Bardet fourth.

The first Colombian to win Lombardy – a historic day.