On Saturday, Marcotte had finished runner-up to Carpenter’s teammate, Oscar Clark, in a two-man breakaway that decided the Reading 120 “Classic of the Americas” road race. In Sunday’s two-hour and 22-minute criterium, the 2015 national criterium champion and 2014 national road champion said he found himself in a more favorable situation. With eight laps to go, Marcotte was part of a 17-man group that formed when a breakaway was reeled in. 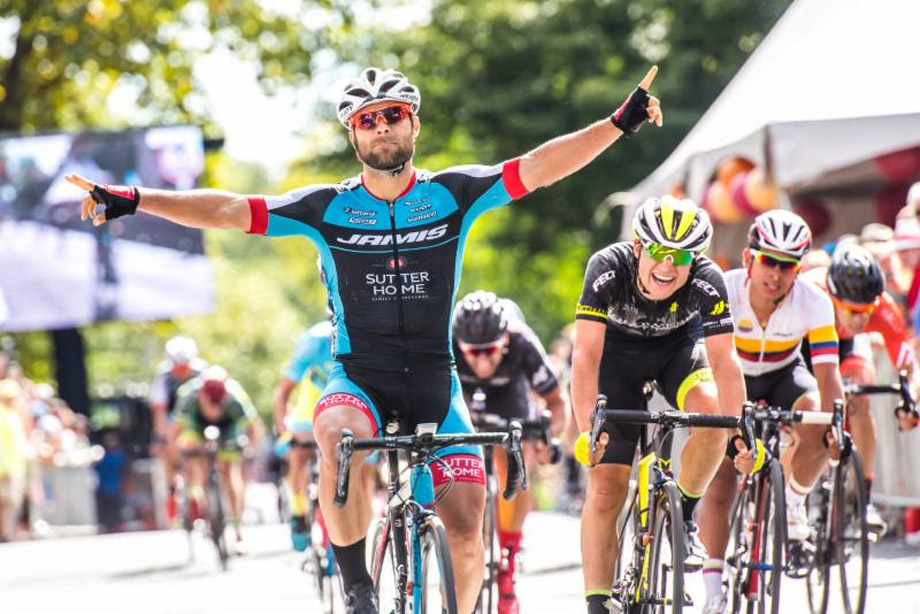 “I got in that move and the numbers of riders from other teams played out today in my favor,” he said. “Yesterday, I was behind the ball trying to stay ahead of the Holowesko team. This time there were some teammates, so it benefitted them to stay ahead and I could sit in and keep the momentum and save it for the last sprint.”

Prior to Sunday, the 36-year-old from Scottsdale, Arizona, had scored wins this year at the Valley of the Sun road race and the Stage 4 criterium at the Tour of the Gila. In addition to winning Sunday and last year, he also was victorious the only other time he competed in Doylestown, in 2012.

“This is a hard crit,” he said afterwards, addressing the crowd of several thousand who filled the streets near the finish line. “You are on the whole gas the whole time, accelerating out of the corners, there is lots of wind and everybody is tired from yesterday. In attrition races, I do well. I am very thankful for Jamis to give me a ride this year to show my talents and show off their bikes.” 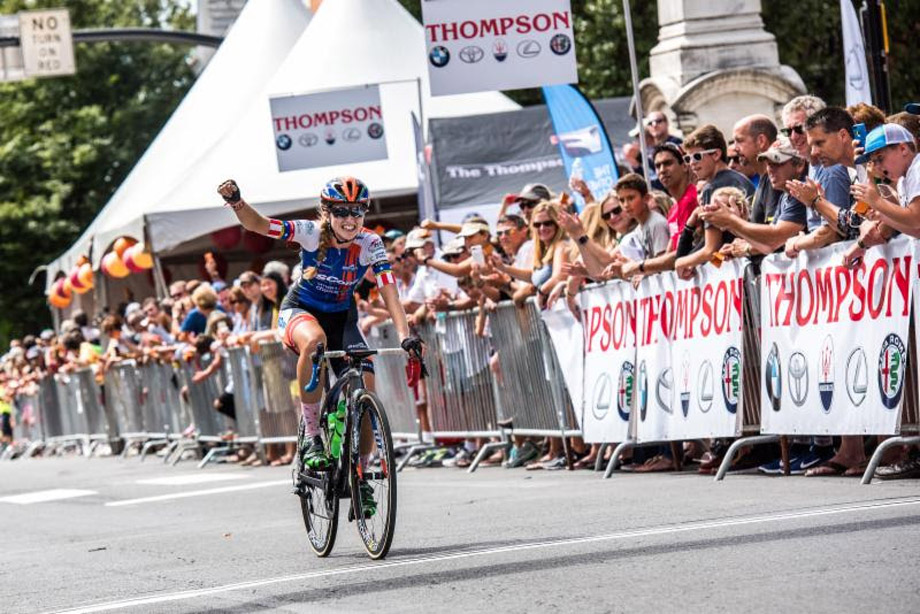 Skylar Schneider had plenty of time to celebrate her win in the Doylestown Health Criterium. (Photo by Darrell Parks.)

Schneider’s teammate, Josie Talbot of St. Charles, Missouri, appeared to have built enough of a lead to take the win after an attack only three laps into the 20-lap, 23.8-mile race. But her impressive 45-minute solo effort was stopped short by a concerted chase by the Fearless Femme team in the last few laps.

“It was a very Fabian Cancellara-type performance,” Race Director John Eustice said of Talbot’s decision to go-it alone for so much of the race. Cancellara, a multi-time world time trial champion and classics expert who is retiring this year, was renown for his epic solo attacks in some of the world’s biggest races.

As Talbot was reeled in, one of her teammates, Yussely Soto attacked with two laps to go. After she was quickly brought back, Skylar Schneider burst out of the field and only San Diego’s Gretchen Stumhofer (Colavita-Bianchi) could follow.

“So many races this year, have finished in breakaways,” Schneider said. “I think that shows how strong the women are. I am feeling pretty happy to have pulled off the win against such strong women.”

Schneider, a 17-year-old from West Allis who has been racing bikes for 13 of them, freewheeled across the line nine seconds ahead of Stumhofer. Schneider’s older sister, Samantha, took the field sprint for third. Samantha recently clinched the inaugural women’s Pro Road Tour title to go along with the PRT team title won by her ISCorp presented by Smart Choice MRI squad.

“This was a fun race to come to,” Skylar Schneider said. “We had never been here before, but our team executed well and I am really proud of them.”

About Lexus:
Lexus launched in 1989 with a commitment to the Pursuit of Perfection. In its ongoing pursuit of innovation, Lexus is pushing the boundaries of technology and craftsmanship. The exciting new Lexus lineup showcases the brand’s commitment to bold and dynamic design, creating a signature look and feel for the luxury brand. The combination of “aggressive elegance” and a more powerful road presence make Lexus vehicles more alluring than ever. Visit www.Lexus.com.

About Eastburn & Gray:
The tradition of excellence at the law firm of Eastburn & Gray, P.C. began over 130 years ago and continues today. With law offices in Doylestown, Bucks County and Blue Bell, Montgomery County, Pennsylvania our experienced attorneys provide high quality legal services throughout Pennsylvania and New Jersey. As a full service firm, Eastburn & Gray attorneys practice in many diverse areas of the law, enabling us to effectively meet the needs of all clients. Learn more at www.eastburngray.com.

About Penn Valley Constructors:
Founded in 1933 by George E. Otto and Robert C. Crowell, Penn Valley Constructors, Inc. has been providing its customers with quality and value for nearly eight decades. The tradition continues under the management of Jonathan E. Otto, President and J. Peter Grover, Vice President and Chief Financial Officer. As Construction Managers and General Contractors, we specialize in industrial, commercial and institutional construction. Please visit www.pennvall.com for more information.

About the USA Cycling Pro Road Tour:
The USA Cycling Pro Road Tour (PRT) showcases the premier domestic road calendar events in the U.S., including criteriums, road races, stage races and omniums. Over six months and spanning from coast to coast, the PRT will include overall individual and team rankings for men and women, crowning PRT Champions following the 26-event calendar. The Pro Road Tour features the nation¹s top Pro-Am road race events, boasts a total prize purse of more than one million dollars and is open to both professional and amateur cyclists.

About Championship Cycling, Inc.:
Championship Cycling creates and implements international bicycle races and the television productions of them. We specialize in UCI and USA Cycling Pro Road Tour races, ones that require the highest levels of technical expertise and experience. 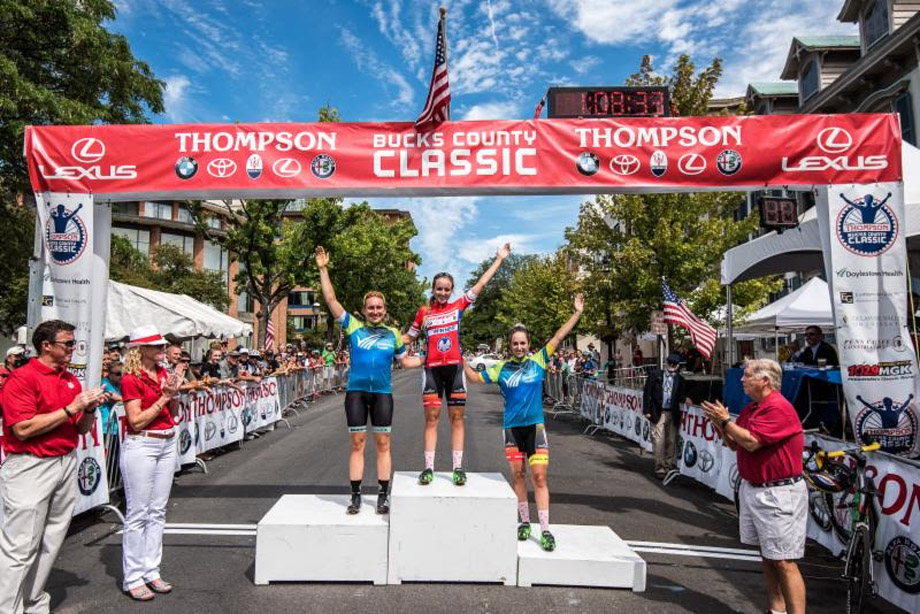