Race Report: Oakley Men’s Stage 2: South Australia’s living time trial legend Rohan Dennis greeted a raucous crowd to take a stage win and GC in his own backyard. Jumbo-Visma’s Dennis – a 2015 Tour Down Under champion – was far too good, using his time trial skills when it counted to claim the Oakley stage 2 Brighton to Victor Harbor. 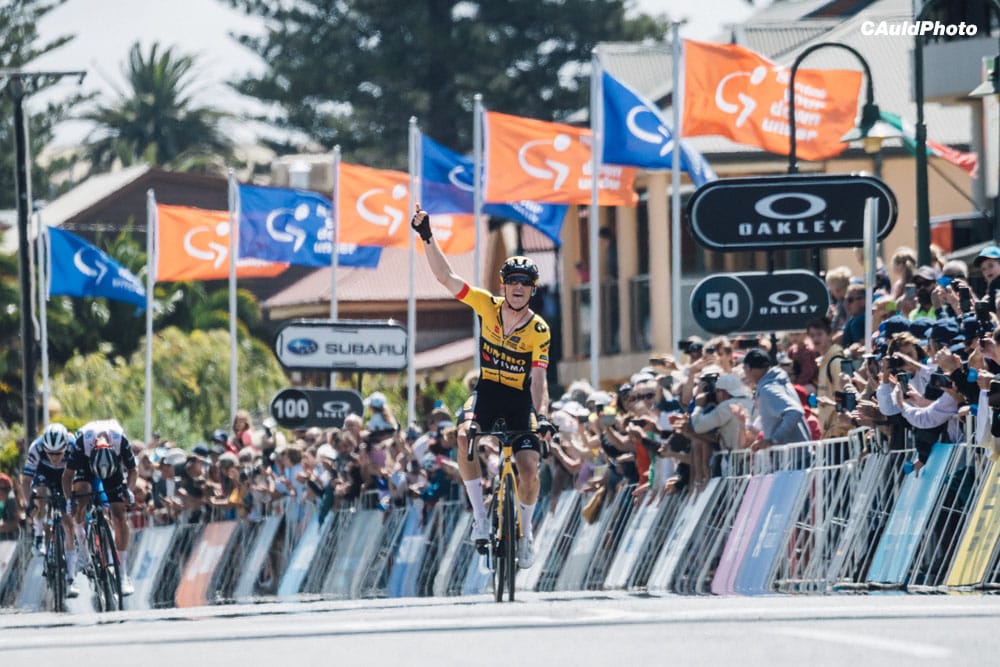 “It was hard,” Dennis said. “It was always going to blow up on that climb. It was done before, like when Daryl Impey won in 2018 but I honestly thought it would come back and I wasn’t willing to take that risk when Jay and Yates went up the road. So, I buried myself and hoped it paid off and it did.” 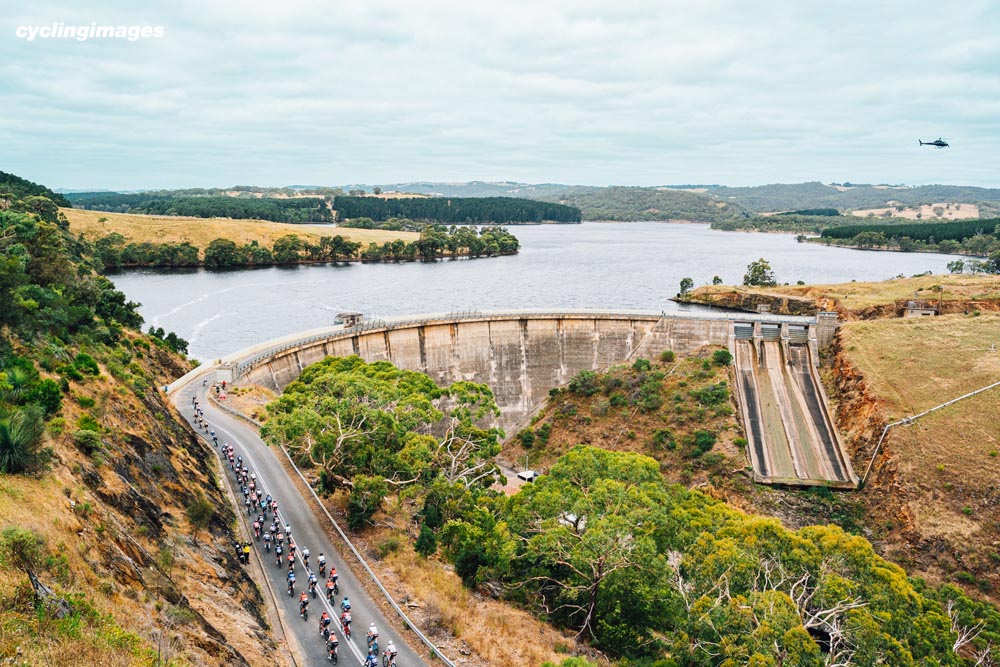 Dennis recorded his first Tour Down Under stage win since claiming the 2015 title when he showcased his bike skills at the uphill Paracombe finish line. The two-time world-time trial champion and reigning Commonwealth Games gold medalist finished the race ahead of Vine, Schmid, Yates, Hindley and Australia’s sprint gun Caleb Ewan at Victor Harbor.

Although Dennis rued the absence of teammate Robert Gesink who crashed and broke his hip during the Ziptrak stage 1 Tanunda to Tanunda, he was forced to play a tactical game with a man down. Jayco AlULa was also dealt a major blow on race day when Australia’s Chris Harper didn’t start. 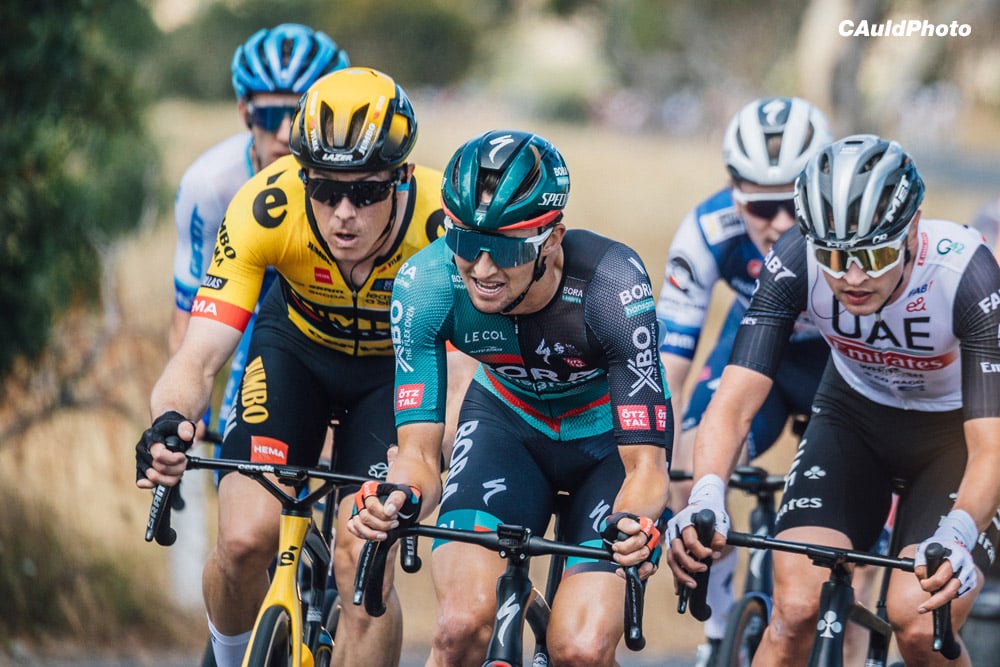 After a tepid start on the Southern Expressway from a Brighton departure Alberto Bettiol’s overall lead came to an abrupt sad ending. Bettiol appeared to suffer from a cramp to his left leg about 11km from the finish line and threw his water bottle onto the tarmac in anger. However, the battle was on for the early time bonuses in the Ziptrak sprint 1 Esplanade, Snapper Point, Aldinga Beach at the 33.6km mark. 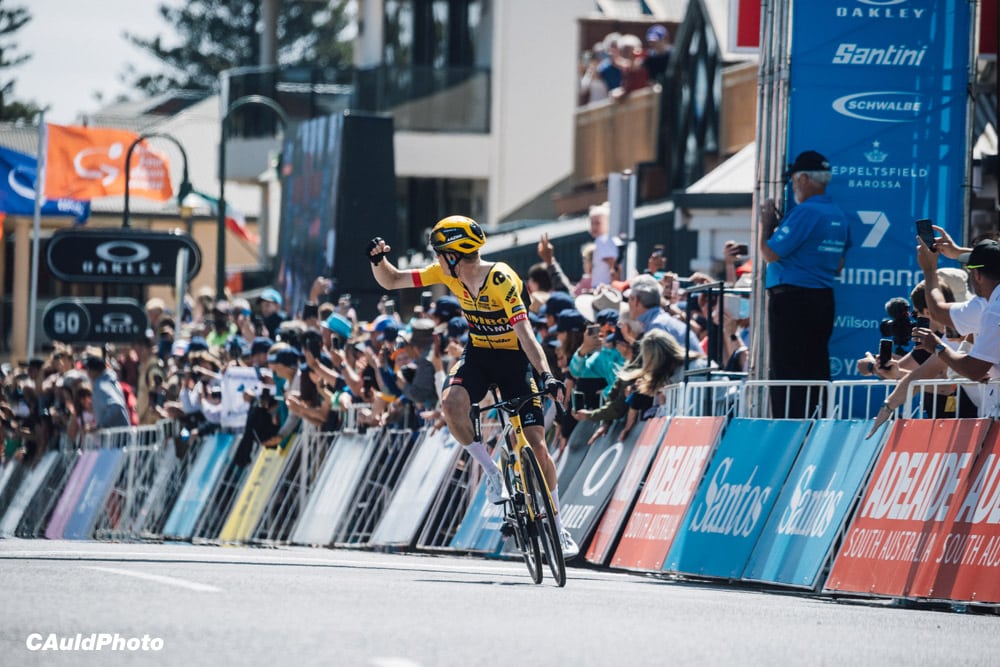 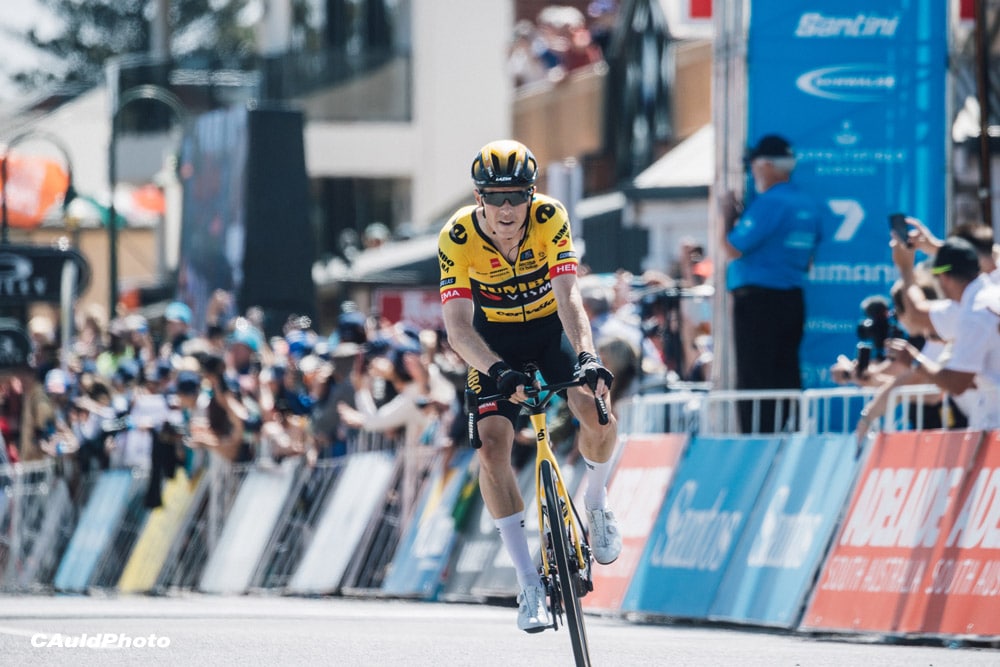 As Myponga Reservoir approached the peloton split as they chased down Boaro and Jacobs. Dennis kept the split company alongside the efex king of the mountain polka dot jersey of Luke Plapp from Ineos Grenadiers alongside teammate Magnus Sheffield who recovered from his stage 1 crash. As the Ziptrak sprint 2 on Main South Road, approached Bettiol was still in good shape to cause an upset. 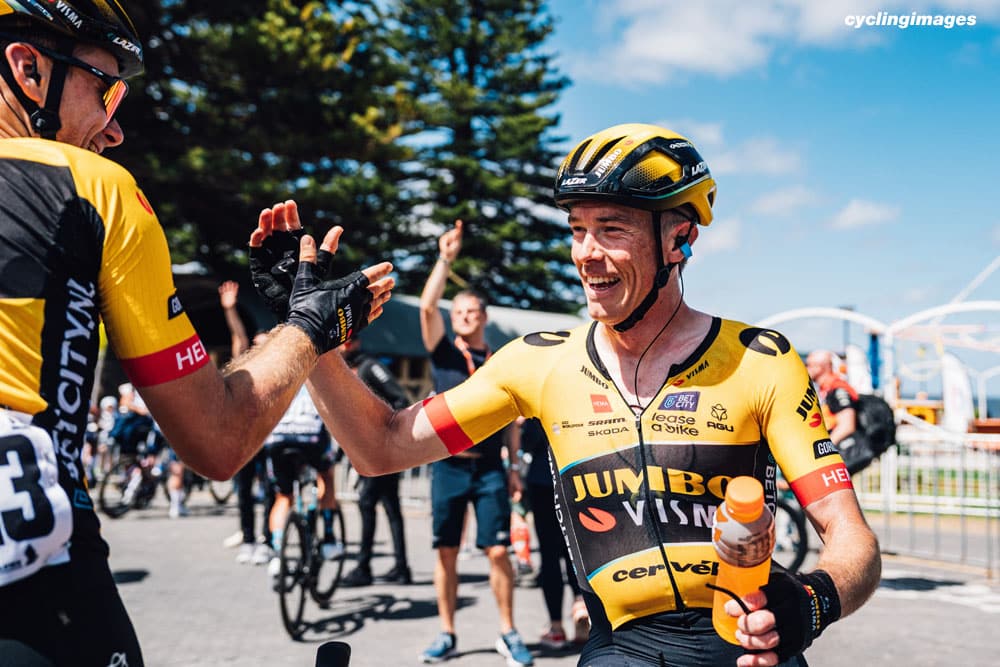 Matthews made a dash for more time bonuses in the intermediate sprint but the Italian stayed on his wheel to pick up a bonus second as the Australian came in second behind Corbin Strong from Israel Premier Tech. At that stage of the race Bettiol still held a four-second overall lead over Matthews and Sheffield.

Kazak Dmitriy Griuzdev then soloed to earn the first efex King of the Mountain of the day at Parawa Hill earning seven points with 67.6km before the Victor Harbor finish line. Italy’s Alessandro Covi was second up the summit and put the heat on wrestling the polka dot king of the mountain jersey from Plapp who was third before the Nettle Hill summit was in sight, 20.9km from Victor Harbor. 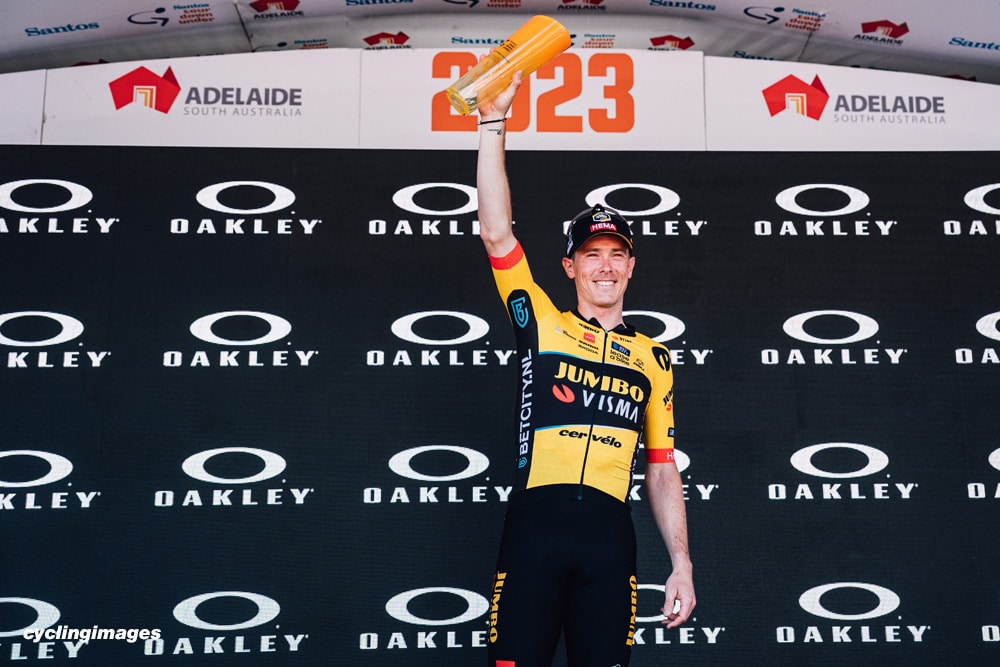 In the lead-up to the second king of the mountain, Matthews was forced to change bikes after a mishap with Sheffield before Jay Vine (UAE Emirates) led a breakaway with Dennis, Yates, Hindley and Schmid. Vine claimed King of the Mountain honours and will own the polka dot jersey for the Hahn stage 3 Norwood to Campbelltown on Friday. 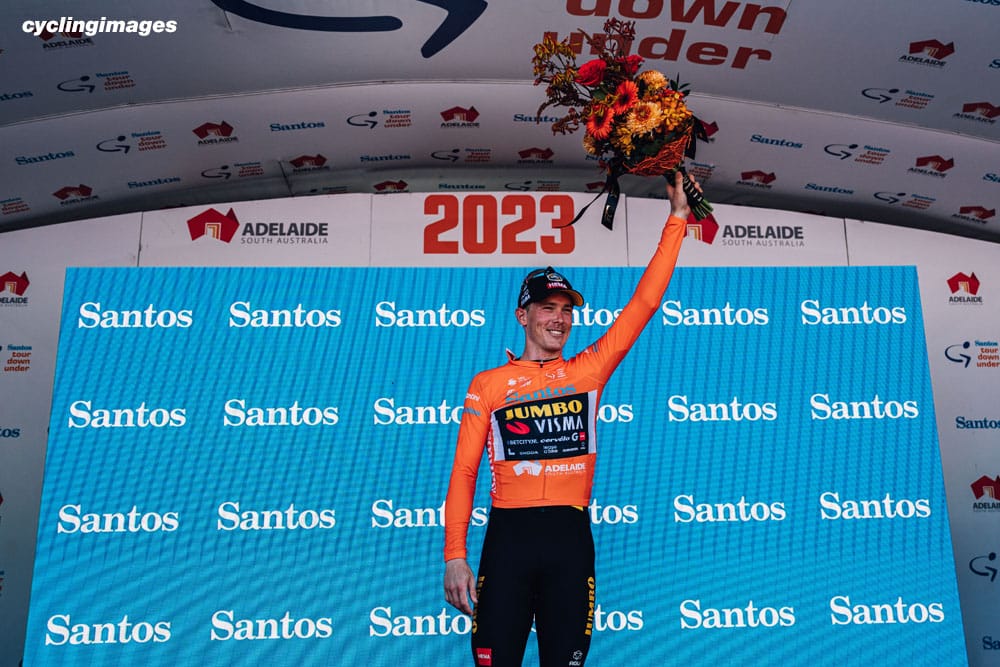 [OAKLEY STAGE 2 WINNER, SANTOS OCHRE LEADERS JERSEY] Rohan DENNIS, Team Jumbo Visma:
You’ve won the stage and you’re leading the GC as well. How did it all happen? Richie Porte predicted this would happen as well.
It seems he had more faith in me then I had in myself. It was always going to blow up on that climb like it has done before when Daryl IMPEY won in 2018. I honestly thought it would always come back, but I wasn’t willing to take that risk when Jay VINE and Simon YATES went up the road so I buried myself and hoped it would pay off, and it did.

You did it without your teammate Robert GESINK who couldn’t race today
It was obviously a big loss, but the guys rallied around me and did a brilliant job today one man down. I couldn’t be happier with how the guys raced for me.

You’ve done it in your backyard as well
It’s always good to get a stage win at the Santos Tour Down Under, it’s been a long time since I got one, 2015 was the last time. It really is special, I’ve got a lot to owe to this race. It’s what helped me go [professional] back in 2012, well in the 2013 season. And it’s helped a lot of guys, not just myself go to the next step. It’s always a proud moment to wear the Santos Ochre Leader’s Jersey.

[ZWIFT YOUNG RIDER’S JERSEY] Magnus SHEFFIELD, INEOS Grenadiers:
We thought you weren’t going to race today after yesterday where you had a pretty bad crash.
Yes unfortunately I went down behind the Bora Hansgrohe rider, I hit the ground quite hard so I wasn’t quite sure how I would feel this morning but I slept really well. Got to see the doctor and get my first stitches. Felt pretty good on the ride on the turbo this morning. I just felt better throughout the stage but I wasn’t able to hold onto the guys up that the climb, but happy to stand up here [on the stage].

[ZIPTRAK SPRINT JERSEY] Caleb EWAN, Australian National Team:
Were you happy that you were there [in the peloton] for the opportunity to arise?
We knew it was gonna be really hard for that climb, I thought it’d be more of a split in the bunch that would get away, not just five guys, especially with the headwind coming into the finish, but the [breakaway] was super strong. I think that the chase behind was actually pretty committed, so well done to them.

Talk to us about racing with this team and having to race your own battles.
Yeah, obviously the guys aren’t so experienced in the WorldTour, They race [National Racing Series] and track mostly. So the level is super high, and you know, they’re doing their best. I knew that when I was going to come here that I’d have to do a lot of my own racing and sometimes it’s good for me to remind myself how to race property. Because a lot of the time I just follow my team and they manage me. So in a way it’s been quite fun to do it myself.

[EFEX KING OF THE MOUNTAIN JERSEY] Jay VINE, UAE Team Emirates:
Jay that was a big move, was that pre planned?
Yeah we saw that climb in the briefing last night with the winds. We had the right group over the top [so I thought] we could stay away. The likely suspects came with us. Simon YATES, we knew that he’d be there and we just had to suck it up and give him a tow to the finish line.

Was there any communication with Simon YATES
I think we all just accepted the fact that he was going to get on [the group] straight away. We also had mutual benefit in getting involved.

Were you thinking long term to win the race? What was the feeling being in the group with Rohan DENNIS multiple time World Champion, and Two Grand Tour winners in there as well?
It’s pretty special doing that in roads in my own country too. It was pretty cool to sort of go in with a plan with the team to really make the race and break it up before we’ve got the Corkscrew which is tomorrow. It was pretty special and really cool to come into Victor Harbor like that. 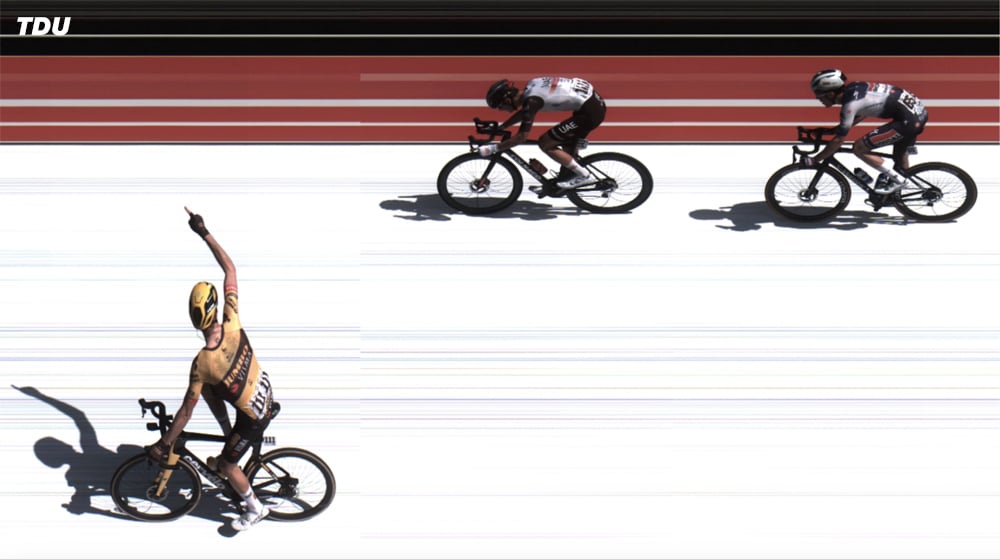 EUROTRASH Thursday: TDU Latest & All the News From the Peloton!