Race Report: THINK! Road Safety Men’s Stage Four The Santos Tour Down Under has delivered a historic maiden WorldTour stage win for Frenchman Bryan Coquard. Coquard (Cofidis) crossing the finish line at Willunga town on Saturday saw the Santos Tour Down Under also deliver a fourth winner from a different nation in an intriguing 2023 edition of the race. 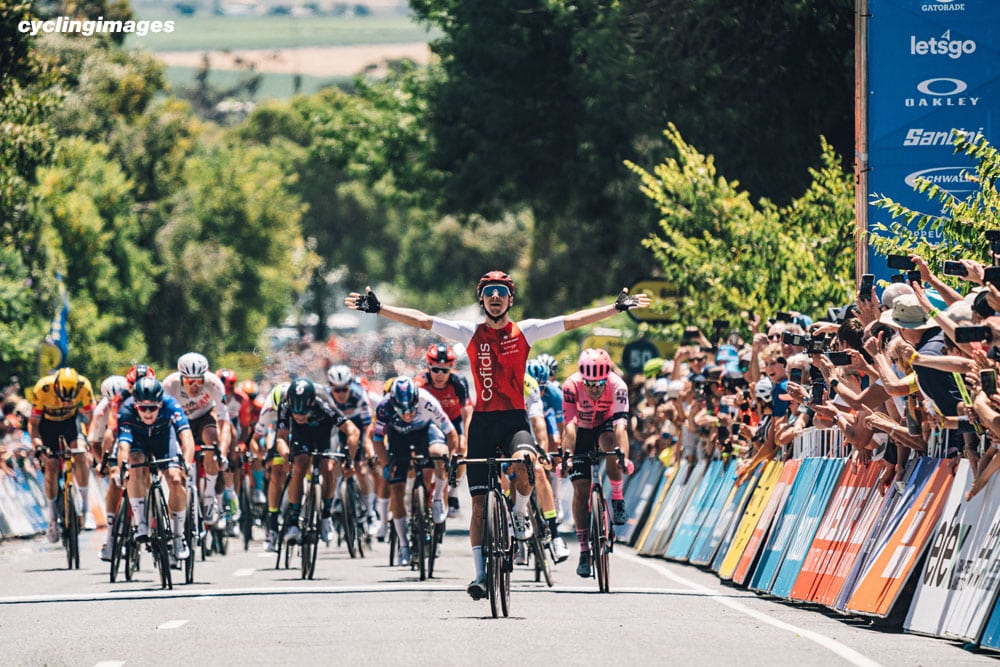 The 30-year-old claimed the Think! Road Safety Stage 4 victory ahead of Wednesday’s efex Prologue winner Alberto Bettiol (EF Education-EasyPost) and Hugo Page (Intermarche Circus Wanty). “I have waited for 10 years for this first WorldTour win,” an elated Coquard said. “I think I had a bad start to the race, I have won many races but no WorldTour races, I am very happy about this. It was nice to smell this team spirit with the guys who I can win.” Coquard joins Italy’s Bettiol, Germany’s Phil Bauhaus (Bahrain Victorious), Australia’s Rohan Dennis (Jumbo Visma) and Spain’s Pello Bilbao (Bahrain Victorious) as unique international stage winners.

The Cofidis sprinter currently sits 13th in the overall rankings after his empathic victory. Jay Vine (UAE Emirates) is still the race leader, 15 seconds ahead of Bilbao and Simon Yates (Jayco AlUla). The reigning Australian time trial champion is just 112.5km from claiming his first WorldTour GC when the Schwalbe stage 5 Unley to Mount Lofty pedals off from 11.30 am on Sunday. 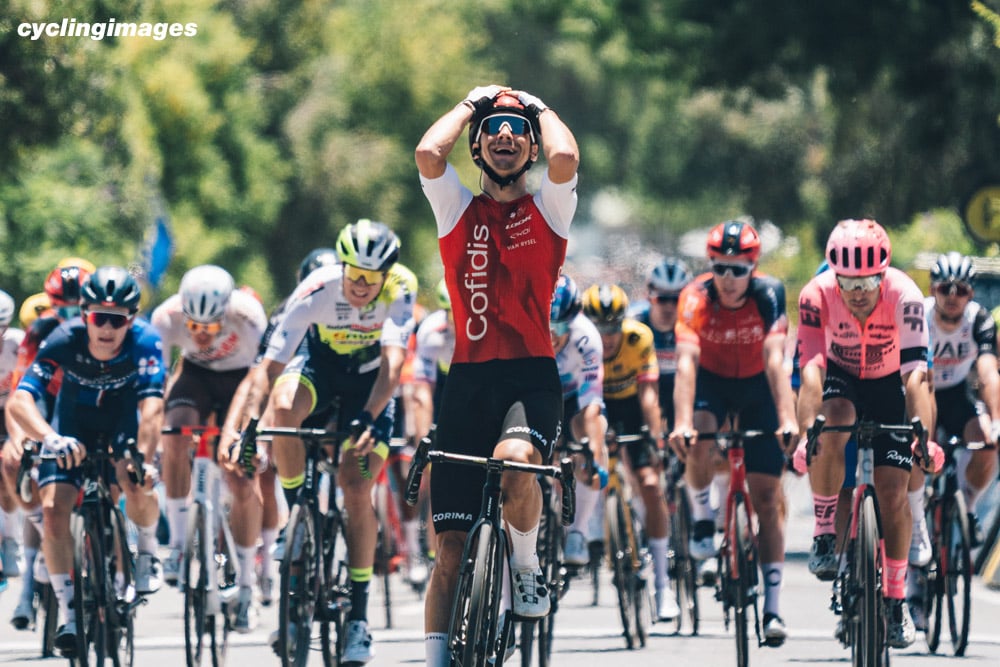 Santos Tour Down Under key points

51.4km: efex king of the mountain 1 – Lower Willunga (category 4): Distance: 2.4km – Average gradient 2.9 percent
Daryl Impey (Israel-Premier Tech) and Jonas Rutsch (EF Education-EasyPost) led a breakaway and opened up a 3min:49sec gap in the first real piece of the action for stage 4. Rutsch was first over the line on High Street, Willunga followed by two-time Tour Down Under champion Impey. Mikkel Honore (EF Education-Easypost) came third in a sprint to the line, edging a point closer to efex King of the Mountain leader Jay Vine (UAE Emirates). Taj Jones (Israel-Premier Tech) re-joined the race after a nasty crash just after the first efex King of the Mountain at lower Willunga. The Australian started the stage 14min:30sec behind overall race leader Vine.

69.5km: Ziptrak Sprint 1 – Esplanade at Snapper Point, Aldinga Beach
Impey and Rutsch shared the honours. The South African earned maximum bonuses as the main peloton started chasing the race leaders anxious for crucial bonus seconds. Ziptrak GC points leader Michael Matthews (Jayco-AlULa) picked up a bonus second at Aldinga Beach for his third place. Matthews was three points ahead of Vine in the virtual points classification at that stage of the coveted race. The average race speed at the first sprint was 47 km/h.

92.3km: efex king of the mountain 2 – Lower Willunga (category 4): Distance: 2.4km –
Average gradient 2.9 percent
The sound of the bell warning the peloton that this was the final lap of stage 4 saw the serious GC contenders on the chase to the finish line. Honore earned the maximum KOM points, Marc Hirschi (UAE Emirates) was second and Ben Swift (Ineos Grenadiers) earned a point for third place. Honore’s KOM points bonus saw him leapfrog Vine in the virtual KOM classification at that stage of the race. Yates was seven points behind the Dane. 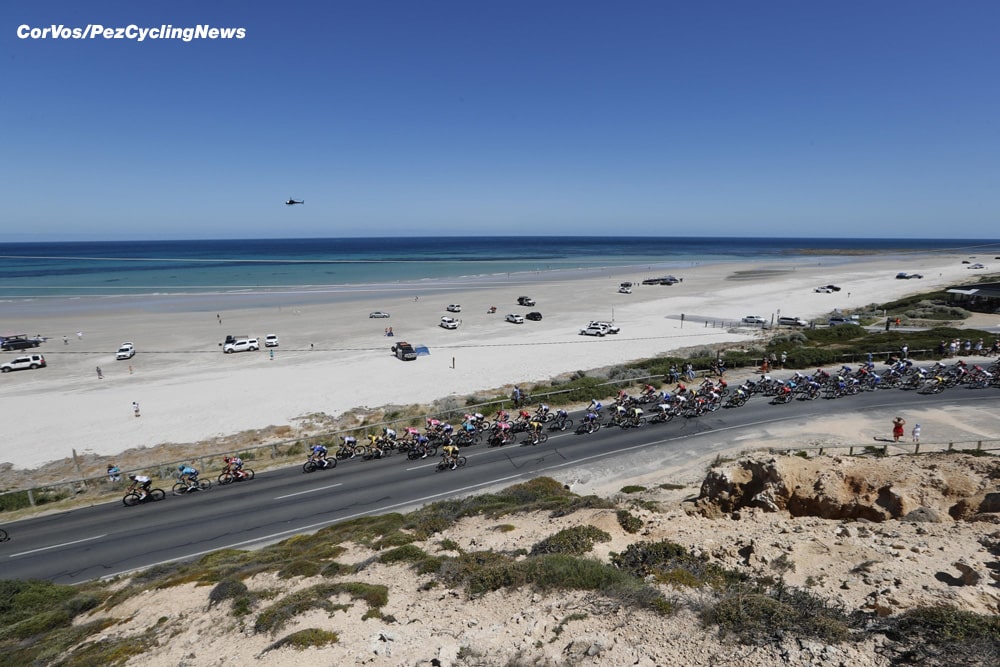 133.2km: Race Finish
It came down to a fine bunch sprint finish when Frenchman Bryan Coqurd upstaged the favourites at the Willunga township finish line on a sunny and windy day. The serious GC contenders Vine, Bilbao and Yates all came through unscathed in another fitting finale in Willunga. 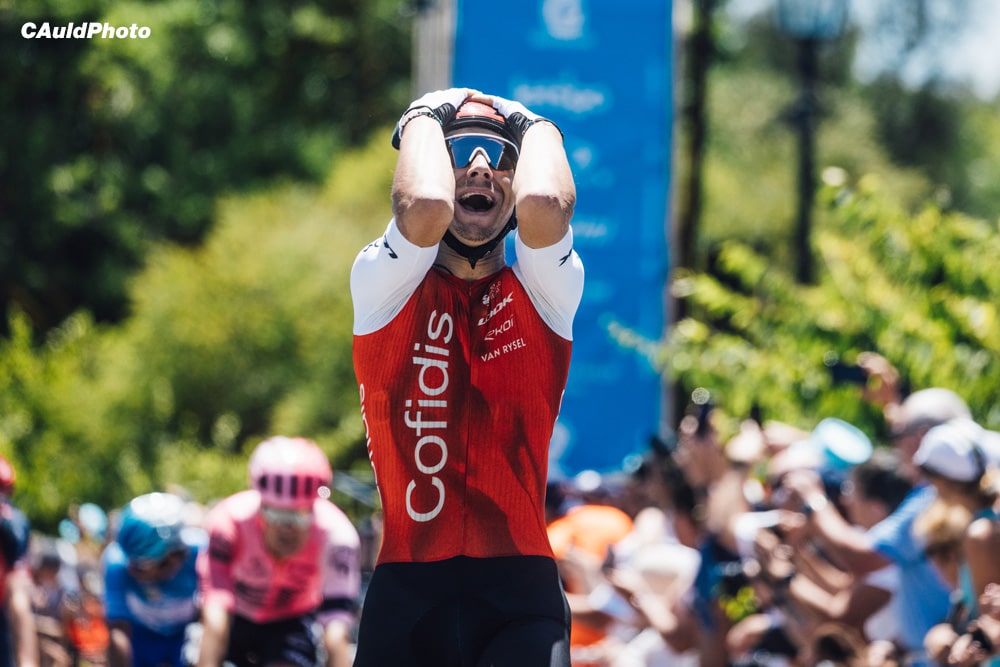 [THINK! ROAD SAFETY MEN’S STAGE 4 WINNER] Bryon COQUARD, Cofidis:
It’s your first WorldTour stage win. What are the emotions running through you right now?
10 years ago since I’ve [been waiting] for this WorldTour win. It’s very nice to share this this team spirit with guys that think I can win, and I win so I’m happy.

When you started your professional career all those years ago did you ever dream that your first World Tour win would be in Australia?
[Laughs]… yeah. I know I’m very good in the start of the season, and a lot of them in really good condition. Last year was my first years in Cofidis and the most important [goal] is to win again and this year it’s clearly winning [at the] WorldTour. It’s because of that I came to Australia for a good season. 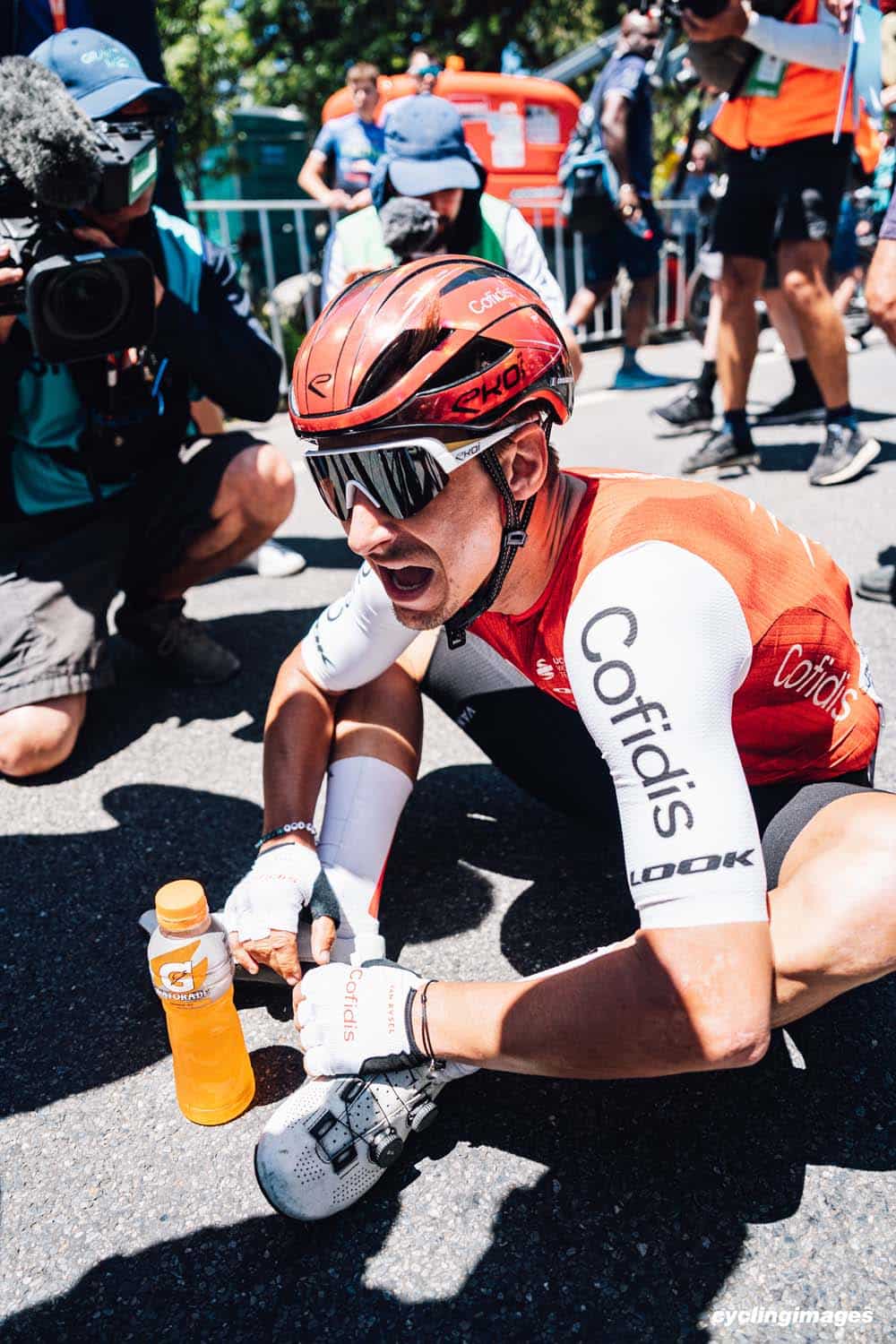 [SANTOS OCHRE LEADERS JERSEY] Jay VINE, UAE Team Emirates:
You’ll have 15 seconds ahead of both Pello BILBAO and Simon YATES, is that enough of a gap to secure the overall victory?
We should be okay. Obviously, anything can happened tomorrow, but the climb is three minutes at six watts per kilo, so that will be like 2 minutes 45 seconds. It’s not long enough really. You can’t do more than that to get away so I think it should be safe.

[ZWIFT YOUNG RIDERS JERSEY] Magnus SHEFFIELD, INEOS Grenadiers:
You’ve still got the Zwift Young Riders Jersey. How did you how did you see today pan out for yourself? And obviously a massive day tomorrow?
I felt quite good today. My knee was a lot better. We were really pushing. I think we did about 50 kilometres an hour for the first two hours. The peloton split at one point and we had just about everyone from the team in that front move. It was really good because I felt like we were in control the entire time. For the sprint, we really wanted to try go for the win with Ethan HAYTER. I think, we had a pretty good lead out but unfortunately he wasn’t quite able to take the win. I was really happy with how I felt, especially after the past couple of days. I feel like I’ve made a step day by day. I think I can really look forward to tomorrow. I think we can be really happy with how the week has gone. We got a bit of a feel of what the bet the Belgian echelons will feel like later this season today.

[EFEX KING OF THE MOUNTAIN JERSEY] Michael HONORE, EF Education – Easypost:
Are you having a better time in this Santos Tour Down Under than the last time?
Yeah. last time I was here in 2019, I had some problems with the heat. I came from around minus 10 degrees in Denmark to a heatwave here in Adelaide. I got a heat stroke and had a week in Adelaide Hospital.

So how did you prepare this time? Because obviously, you would have heard about the heat and you’ve experienced the heat.
It’s something I thought more about. I also came down here a week earlier. I was happy to be down here a week earlier, and I love Australia. I’ve just been here for the World Championships as well. And it’s my kind of second home. It’s far away but Australian people, the culture and everything around here. It’s super, super nice and I enjoy being here every time. 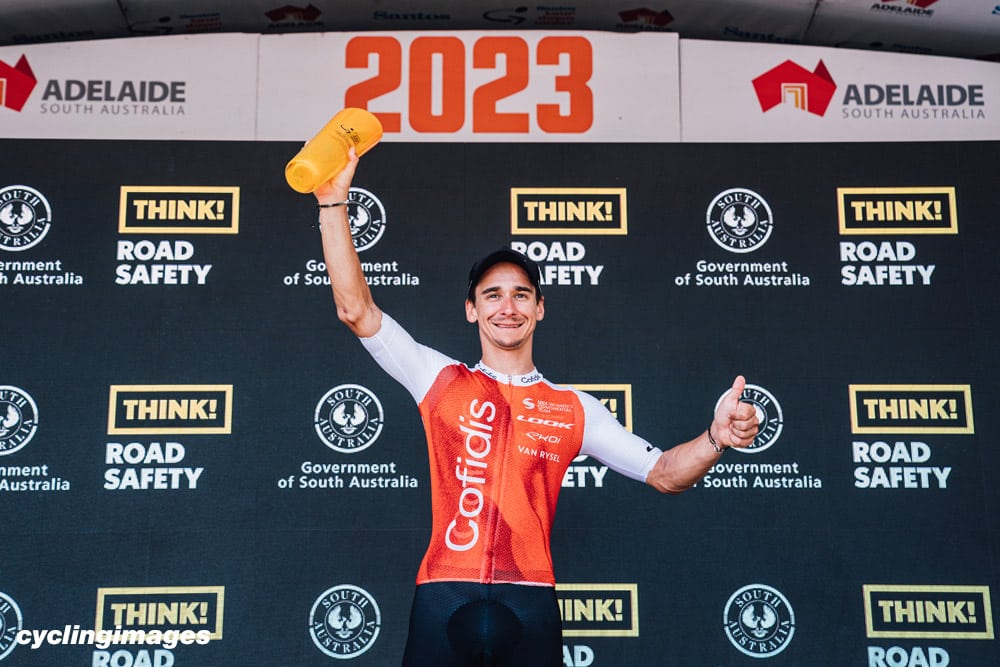 [ZIPTRAK SPRINT JERSEY] Michael MATTHEWS, Team Jayco AlUla:
You weren’t able to get the win, but you still hold the Ziptrak Sprint Jersey.
The legs weren’t there unfortunately. I struggled most of the day. I really tried to profit from some of the sprinters missing the front group and the crosswind there. All through the day, it was a battle against myself unfortunately. But we still set it up. We still believed in the opportunity to go for the stage today. But just didn’t have the legs. There’s no hiding behind it I just wasn’t good enough.

You know, you started off as a week of such high hopes for you personally. It must be a bitter pill to swallow
It’s been a rocky road for me this week so far. Yesterday, I think it turned it around quite well. Today, we optimized the intermediate sprints. I think Simon YATES got a second over Bilbao. He’s up to second place now so that’s a positive.

[YAMAHA MOST COMPETITVE RIDER] Daryl IMPEY, Israel Premier Tech:
Yamaha Most Competitive Rider!. That’s a pretty big honour. Still fighting away, which is good to see.
Well, I haven’t showed myself in the race too much. It was nice to get out there today. It wasn’t really the tactic of the team. I just kind of followed the flow of the race and then we look back and we had a gap. Then sometimes when you are up there you think, well, it’s a very tricky day, maybe it’s better to have someone up there in case we miss the split. It was okay. We had Corbin STRONG for the final, which was perfect. Sebastian BERWICK started really well and then we still had quite a few guys up at the front. 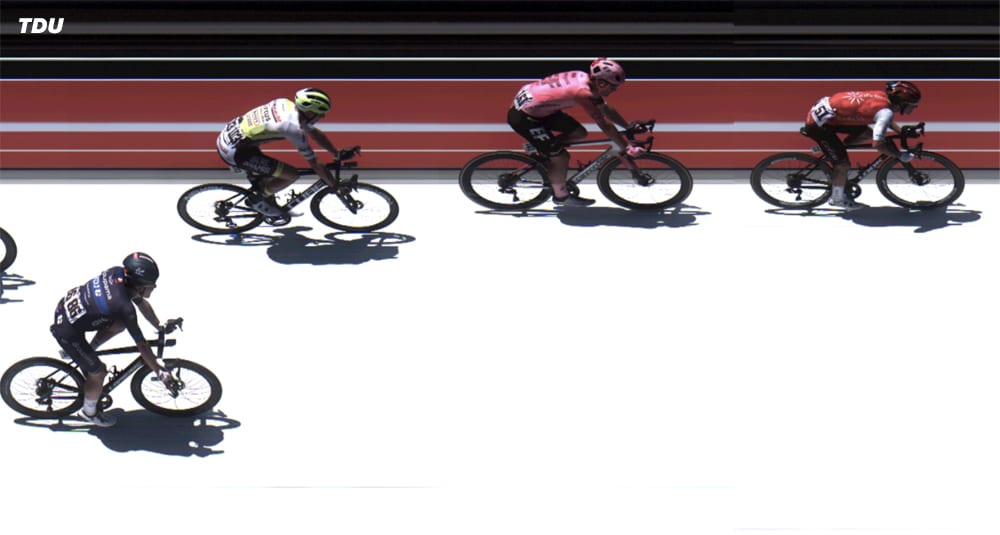