Race Report: Limburg, what a part of the world to have a bike race. The sun beaming down, the tree blossoms gleaming white, fiercely green grass and a sequence of knife-edge climbs that cut riders to the quick. The Amstel Gold is a race as good to look at as it is hard to ride. A war of attrition hammered out across a picture-postcard, spring landscape.

Much has been made of the fact that Amstel Gold bullets up the Cauberg four times, but there is a shrapnel scatter of nasty ascents pockmarking the hills and ridges around Maastricht. I still have cold sweats over the Eyserbosweg, where I think I left part of a lung in 2008.

Here’s how it went down
Deciding that the safest place to be in one of the most notoriously tricky pro races (tight corners, road furniture, and plenty of shit on the tarmac if the weather is wet) are the day’s primary escapees: late substitute Laurens De Vreese for Astana, Jan Polanc (Lampre-Merida), Timo Roosen (LottoNL-Jumbo), a revitalised Linus Gerdemann (Cult Energy), MTN-Qhubeka’s Johann Van Van Zyl and Niki’s little bro’ Mike Terpstra (Team Roompot).

The peloton acts like a weary parent who has just dropped behaviourally-challenged toddlers into a ball pit: turns its back, breaks out the newspaper’s Sunday supplements and lets them get on with it. The reluctant baby-sitters are BMC and Movistar, keeping the break in some sort of check, as the kilometers click by and the big climb sequence looms.

The lead is six minutes the first time up the Cauberg. It’s a metaphoric snooze for the main field as the errant escapees take a liberty with around ten minutes of an advantage as they sneak through the feed zone. Bloody kids – give them an inch, they take a… well, you know.

They still have six minutes up the Cauberg for the second time, but the distance and the warmth of the day is taking a toll. By the Gulpenerberg inside the last 50kms the break is falling apart, and Polanc, Gerdemann and De Vreese are fighting a losing battle to stay clear. Next to move is IAM Cycling’s David Tanner, so strong mid-week at Fleche Brabanconne, marked by Etixx – Quick-Step’s Tony Martin as the original escape breathes its last on the Eyserbosweg. 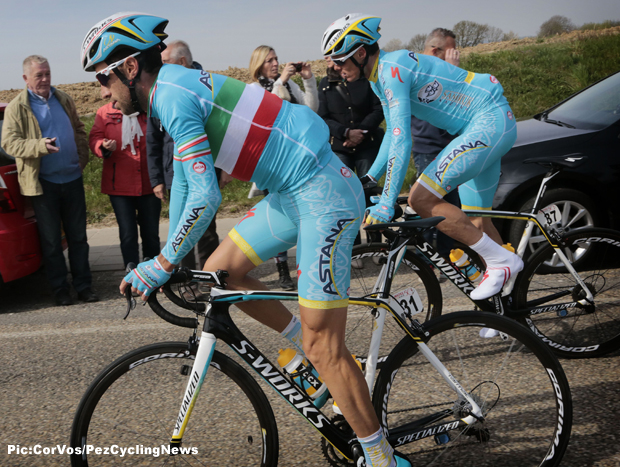 Vincenzo Nibali was one of the strongmen of the day

Inside forty kilometers left now
Simon Clarke is there for Orica, and suddenly the race is alight. A kopgroep featuring Nibali is driving a chase and there needs to be a reaction from BMC and Movistar, in particular. Seconds after Diego Rosa and Damiano Caruso take each other out on another tight corner with 28kms left, Tanner and Clarke get picked up by Tony Martin (Etixx – Quick-Step), Vincenzo Nibali (Astana) and Cannondale-Garmin’s Alex Howes.

Penultimate trip up the Cauberg, and the BMC-led peloton – still HUGE at this point of such a mad-difficult race – is picking up Howes as Clarke drills the break on the flat road. World champ Kwiatkowski is getting a free ride as the peloton spreads across the road, about ten seconds back on the escape.

15 to go
Nibali lifts the pace and Tanner pops, so Clarke tries to rip clear and the Italian Tour champ and Tony Martin both cruise into his slipstream. Clarke then immediately tries again as Nibali gestures at Martin to close the gap. All this is very helpful for his team-mate Michael Matthews, who is sitting safely to the front of the field. 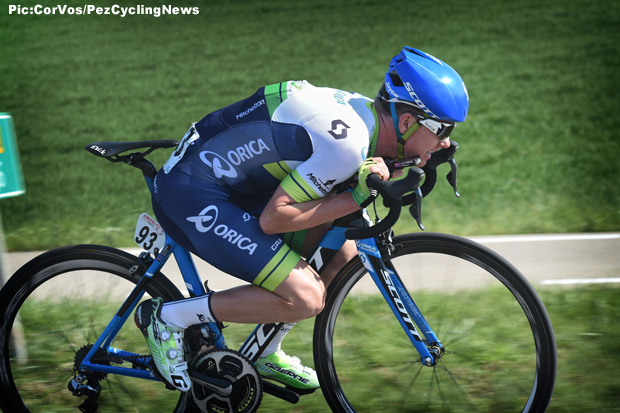 Inside ten to go, Clarke is dutifully ploughing on, but his effort isn’t going to lead to personal glory; he might just be setting up Matthews, though. Astana and Etixx – Quick-Step tow the field past the Aussie with eight clicks to go. Straight away, Fuglsang jumps for Astana with, almost inevitably, BMC’s Greg Van Avermaet joining him. The Dane does the work, gets worked up as Van Avermaet point-blank refuses to do anything to help him.

Tinkoff-Saxo and Movistar patrol the head of the field with five to go. Mirko Selvaggi for Wanty-Groupe Gobert jumps across with Fleche-Brabanconne winner Ben Hermans (BMC) but that only spells the end of the Fuglsang/Van Avermaet escape.

Suddenly, there are five Oricas at the front as we hurtle downhill into Valkenburg and head for the Cauberg for the last time in 2015. It’s beginning to look like the sort of blanket sprint finish you’d get at the Tour de France but that last slope should break things up.

The finalé
Ben Hermans (BMC) goes again, trying to soften things up for Gilbert. The ex-world champ takes flight with Matthews on him, then Gilbert digs again but can’t shake the young Aussie. And a third time he tries; Matthews on him again. Valverde (Movistar) and Kwiatkowski (Etixx – Quick-Step) are closing in and it is an elite group coalescing as the finish line looms. 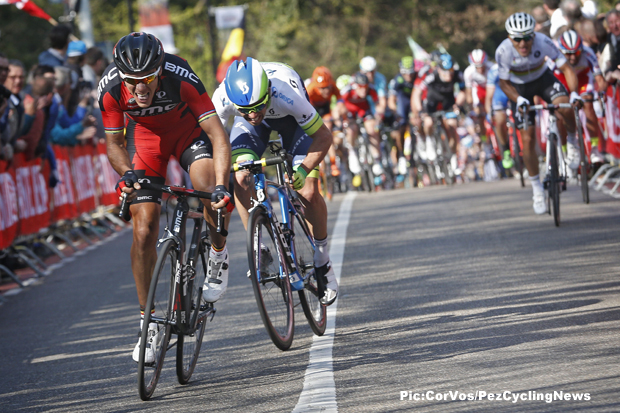 Gilbert, grimacing, is boxed in at the back and won’t be defending his title – Van Avermaet leads it out as the bee swarm angrily darts for the line.

There’s a flash of white as Kwiatkowski gets lucky, weaving a miracle path through the center and then around the left-hand side of the elite sprint group, doing enough to gently nudge the door that seemed to be opening wide for Valverde – a brilliant, rainbow-banded victory built on race smarts and the careful work of his team. 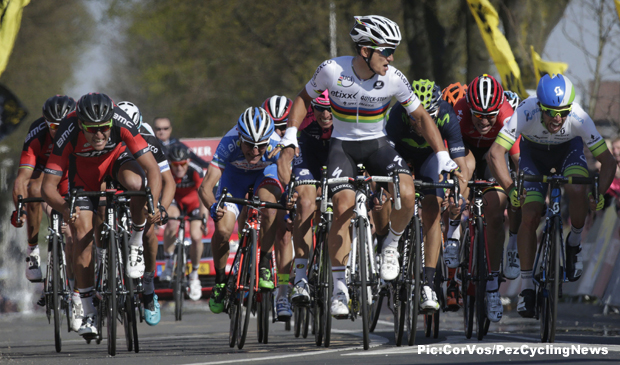 Time to look round and see all the beaten riders

The Pole has enough in hand to look around and scream with joy – the Amstel Gold is a hell of a way to get the monkey off your world champion jersey’s back, and keep his DS Patrick Lefevre happy into the bargain.

It was a slow-burner of a race today, but a very worthy winner from a star-studded group. Keep it tuned to Pez for the feedback and fallout on tomorrow’s Eurotrash.