Spring must be here in Europe, at last, as the first big Classic of the season leaves Milan on Sunday morning to make the near 300 kilometre journey to Sanremo, but this year without the climb of La Manie. Our ‘Primavera’ expert, Ed Hood, takes a look back at his Sanremo experiences and forward to this years protagonists in the battle to the Ligurian coast.

La Primavera, ‘Spring time’ that says it all – the first Monument; the longest Classic; an Odyssey across geographic, social and climatic zones with the percorso for the finale the stuff of legend.

First, the stats:
The race was first held in 1907 when Frenchman, Lucien Petit-Breton took the laurels. This year’s edition will be number 106; the race only surrendered the 1916, 1944 and 1945 editions to the World Wars. Italy has won 50, Belgium 20, France 12, Germany six, Spain five, The Netherlands three, Ireland, Switzerland, Australia and Britain are all on two.

“Record-man” is Eddy Merckx of Belgium on seven wins between 1966 and 1976 – if there’s ever any doubt about who the greatest cyclist in history is, then that statistic dispels it. Second, behind Eddy in the palmarès is the first of Italy’s Campionissimo, Costante Girardengo on six wins; another Italian legend, Gino Bartali triumphed four times; sharing that number of wins is German Erik Zabel but it should really be five wins. He committed the novice’s error of throwing his hands up too early in victory celebration – not the best idea when Spanish fast man Oscar Freire is just an inch or two behind you. 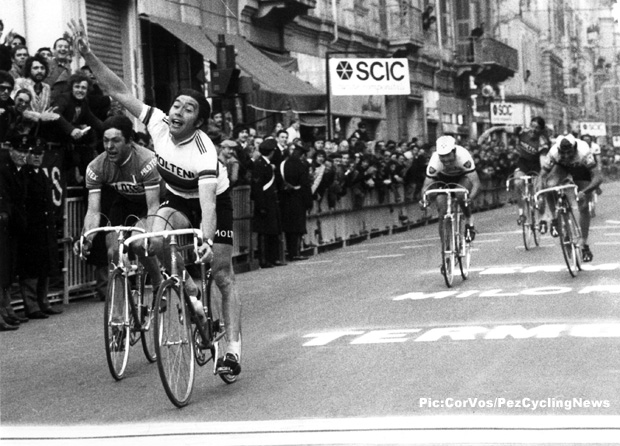 And on the subject of ‘Oscar The Cat,’ the Cantabrian shares three wins with the second of Italy’s Campionissimo, Fausto Coppi and another man with a cool nickname, ‘Le Gitane’ – the Gypsy, Roger de Vlaeminck. Those names sum the Primavera up – a race for the very best.

Wins by ‘unknowns’ are rare and even the not-so-recognisable names on the roll of honour have a story behind them. Take Gabriele Colombo (Italy) who won in 1996; a very classy rider with a beautiful position on the bike and wins in the Tours of Calabria and Sardinia to his credit – just a shame he was a ‘party animal.’ Whilst it’s known as a “sprinters classic” with the likes of Zabel, Cipollini, Petacchi, Freire, Cavendish and Goss taking the flowers in the last decade, the solitary rider can still win. In 2006 the Italian with the “golden-boy” looks, Filippo Pozzato, slipped the bunch late to deny Petacchi his “double” whilst Cancellara did the same thing two years later and Gerrans won from a small break three years ago.

In recent years it’s been a good race for the ‘Anglos’ with Cav, Goss and Gerrans all triumphing. The first time English was spoken on the podium however, was almost 60 years ago in 1957 when 1961 Dauphine winner and twice Tour de France stage winner, Brian Robinson from Yorkshire, England took third behind Spanish sprinter, Miguel Poblet. It was 1964 before another Englishman topped the podium, the legend that was, Tom Simpson. Another 20 years passed before Sean Kelly of Ireland took third place in 1984 before winning in 1986 and 1992. The ’92 win was his last big triumph, a death-defying solo drop down the Poggio saw him bridge-up to Italian star, Moreno Argentin who was seemingly heading for a lone-win in the grand style – until Kelly arrived. Sanremo was quiet that Saturday afternoon.

Greg Lemond of the USA was second to Kelly on the Via Roma in 1986 and in 2002 it took “Super Mario” Cipollini at the peak of his powers to prevent Pez contributor Fred Rodriguez from giving the stars and stripes an airing in the roll of honour.

And now, allow me please to take you on a highly personal journey from Milano to Sanremo… 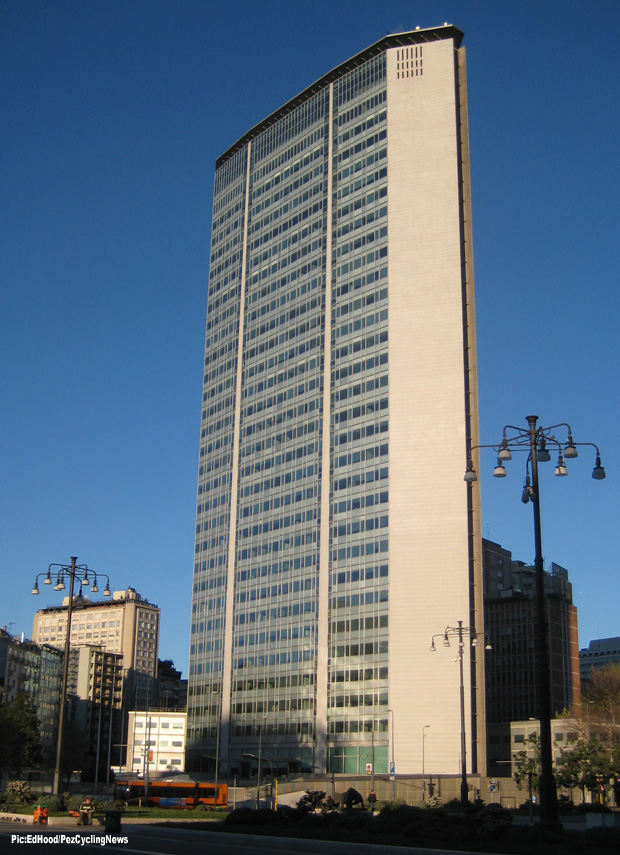 The Pirelli Tower is perhaps Milano’s number one business status symbol; sleek, shiny and slim it’s in all the architecture books and tells the world that Milano has style, taste – and money. 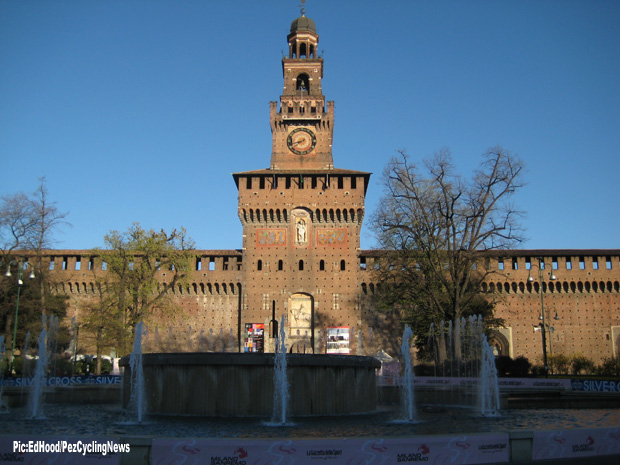 But there’s history aplenty and on my last trip to city known as one of the ‘Four Motors’ of the European Economy the race started at the beautiful Castello before braving the mean streets of Milano en route the endless plains of Lombardy. 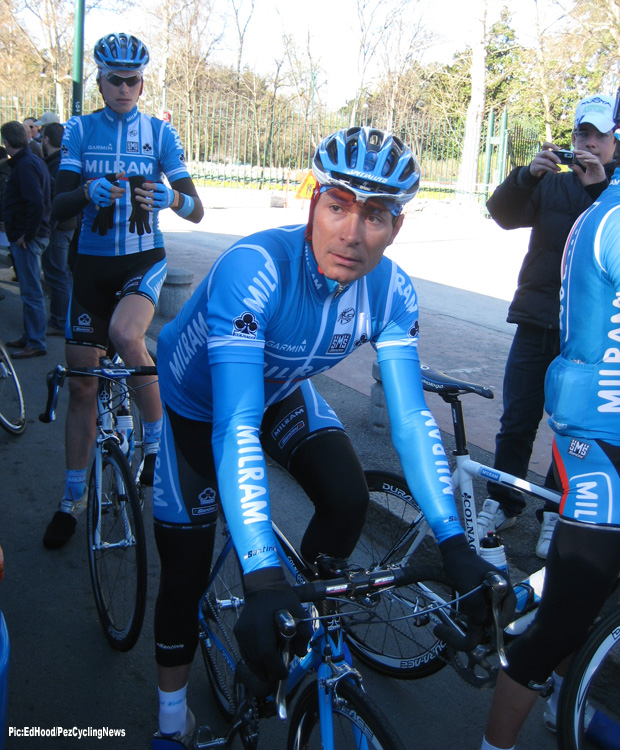 The buzz at the start is palpable with the big favourites nerves piano wire tight; you just knew not to say a word to Erik Zabel. 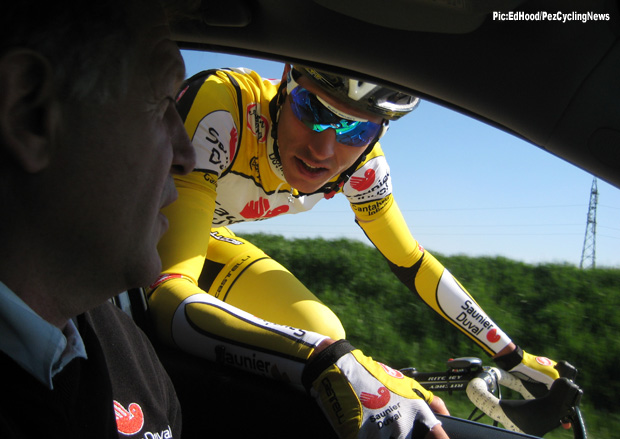 I was fortunate enough to drive the whole percorso in the Saunier Duval team car and on the long trail across those plains the boys would come back for a chat with us in the car – Eros Capecchi is just SO cool. 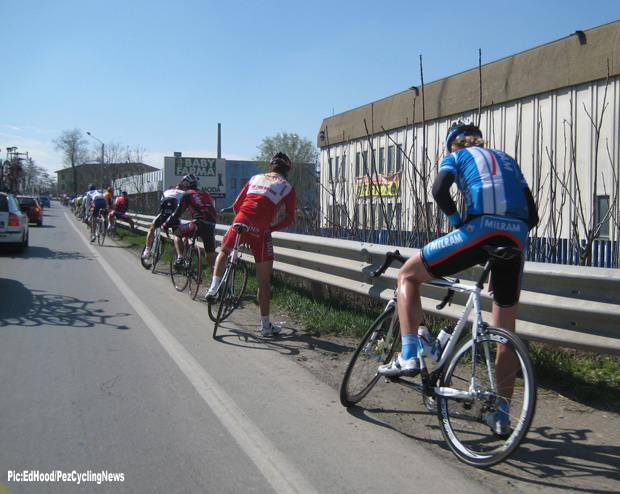 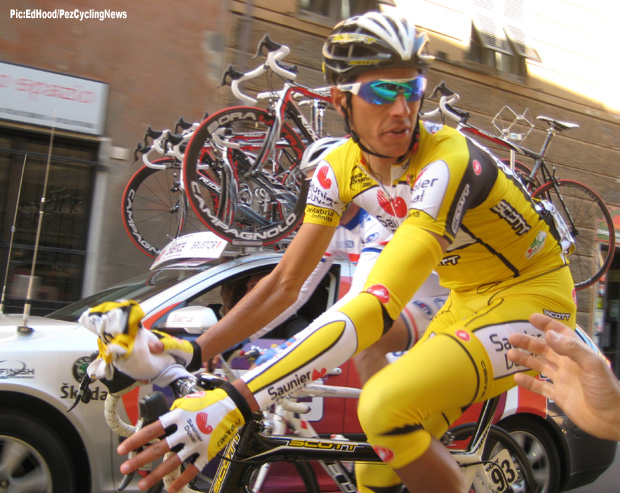 The bottom of the Turchino Pass beside that bluest of blue seas, The Ligurian is where the blue touch paper lights and everyone is back at the cars disrobing – there’ll be no need for capes or arm warmers just shortly.

It’s total madness and the language is choice as riders and car drivers swerve, brake, curse and steel themselves for the race’s next phase. 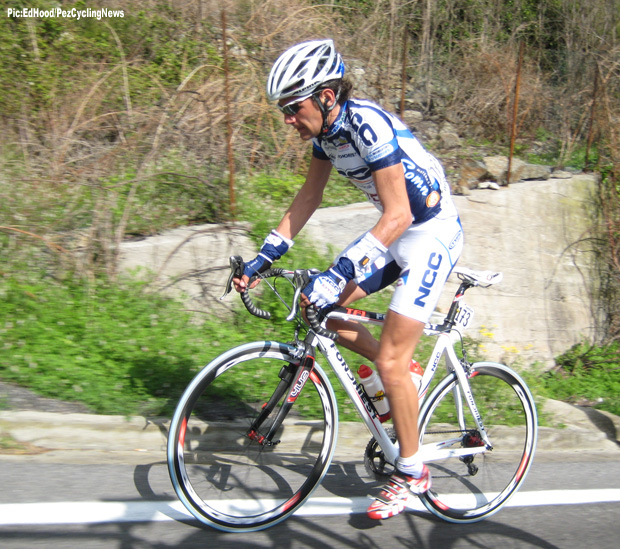 La Manie; this climb up off the coast road was introduced in 2008 to make things tougher for the sprinters; it’s no walk in the park and did for most of the guys in the break on my day in the team car. 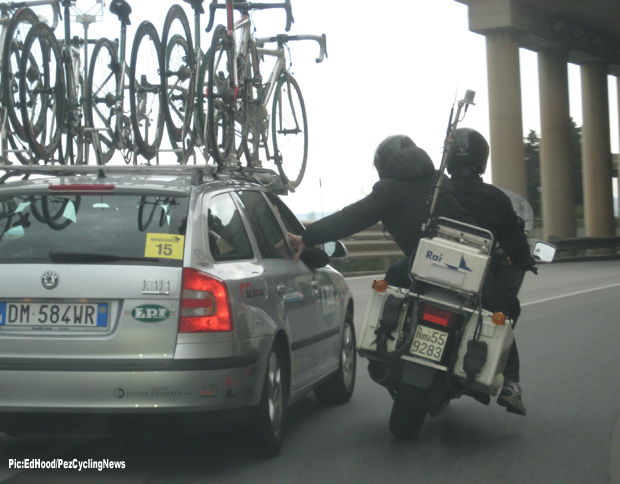 Whilst soccer may rule the roost as far as Italian sport goes, the Primavera is still a huge deal and the TV and radio guys will stop at nothing to get those sound bites. 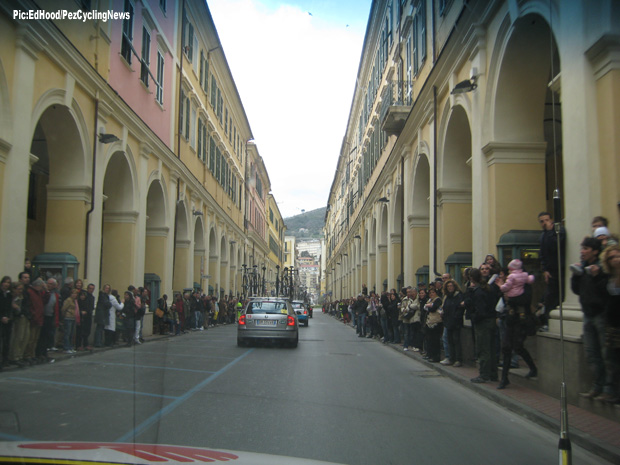 And there I was driving between those arcades through those narrow streets; just like you see in the helicopter shots – a wonderful experience. 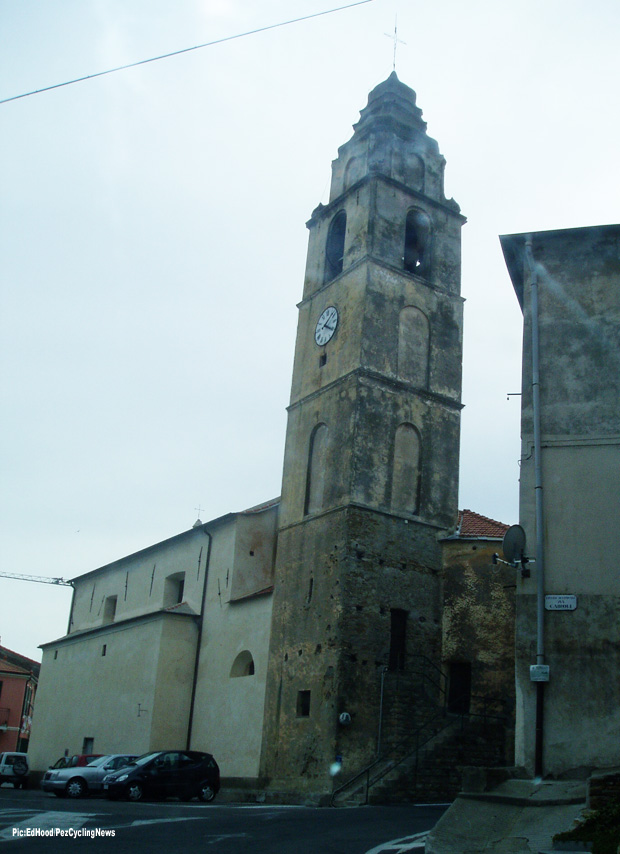 The Cipressa; it did for Super Mario a few times and it’s a relief to see that steeple if the lactic is turning your thighs to molten metal. 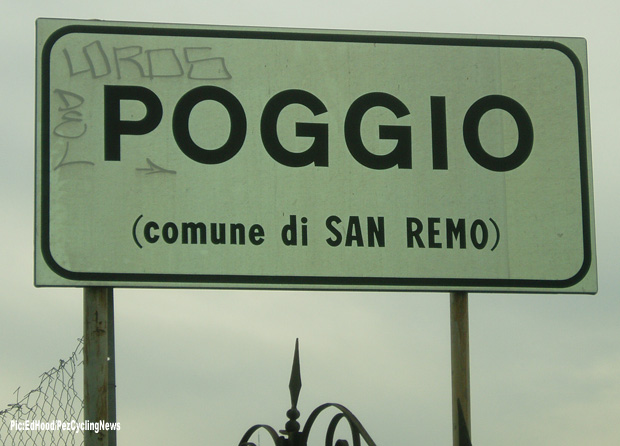 It’s actually a pretty bland piece of road with nothing much to see or talk about; but it’s Legend. 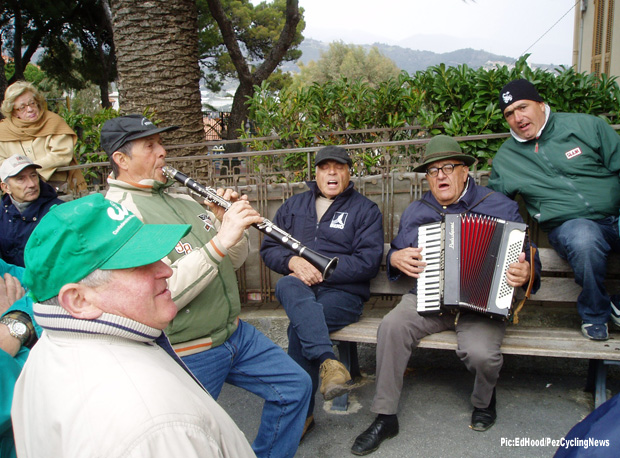 It’s not steep, the bends aren’t too tricky but it’s nearly a day at the office since you left Milano and Jeez! those legs hurt… 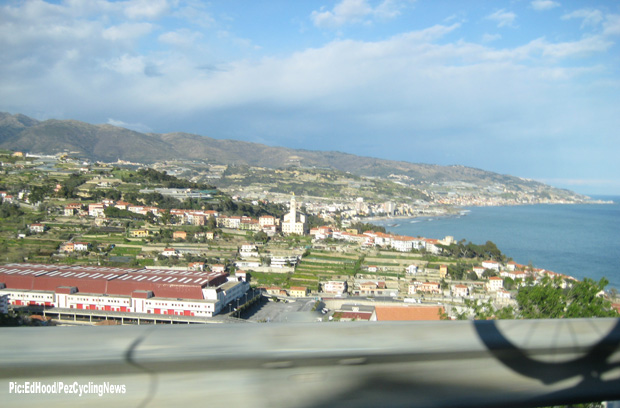 The good thing about the Poggio is that the top is the top, there’s no messing; ease, bank left and Sir Isaac Newton’s discovery will help you all the way down. 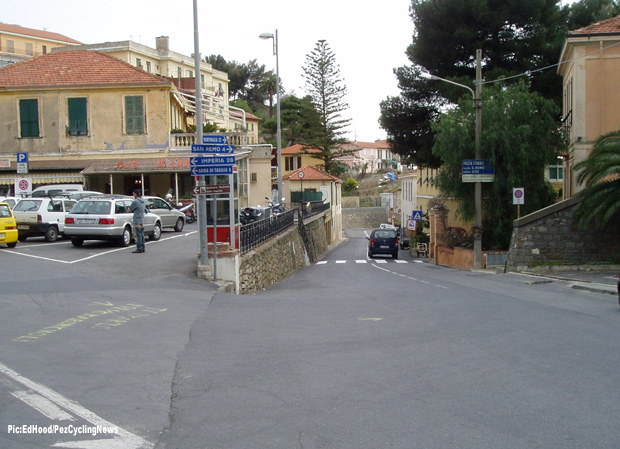 On race day, the vibe up there is great – the beer and wine flow and so does the song… 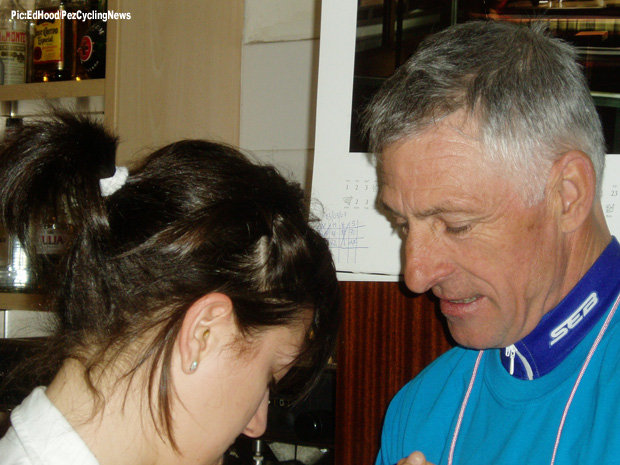 Especially if Francesco Moser shows up – he’s still a star at the top of the Poggio on Primavera day. 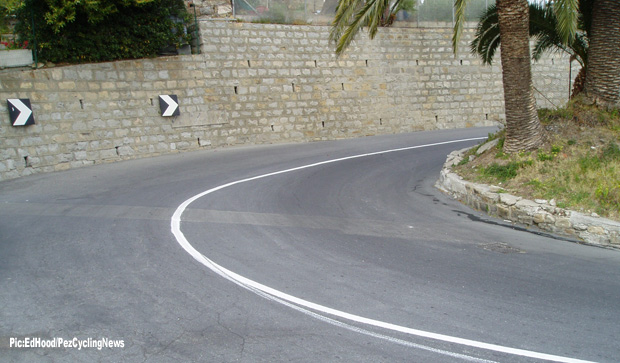 The descent is tricky, the cambers deceiving and if an amateur tried to go down here like the pros do then it could only end in tears. 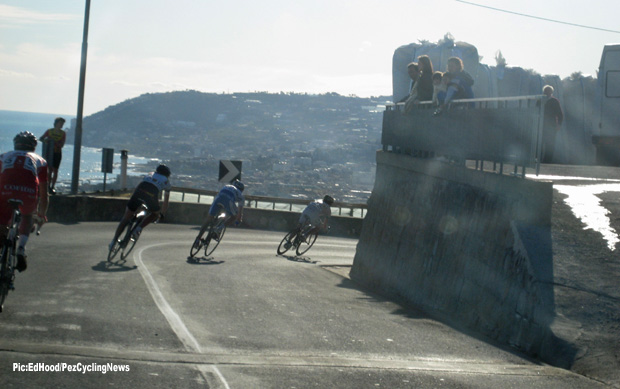 I grabbed some shots as we hurtled down but it was like trying to take photos inside a NASA re-entry simulator. 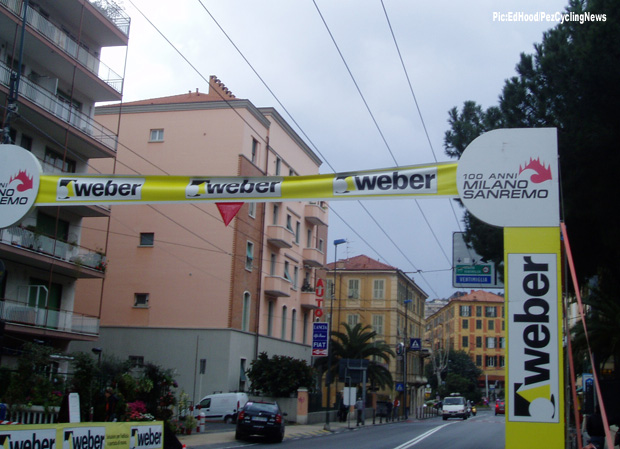 The red kite could be in ‘any town Italia’ but it’s not, it’s Sanremo and if you get this finish right then you become a legend – especially if you’re Italian. 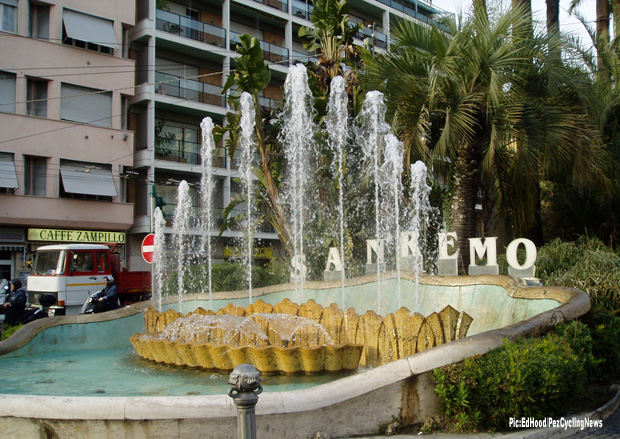 The famous fountain at the end of the Via Roma – where the race returns to, this year – marks the point where there’s no holding back, no more poker playing. 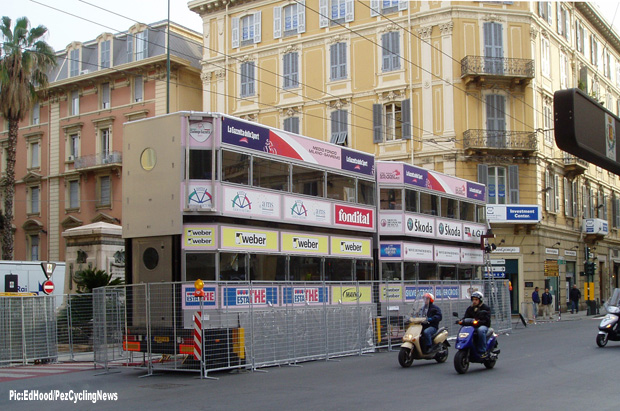 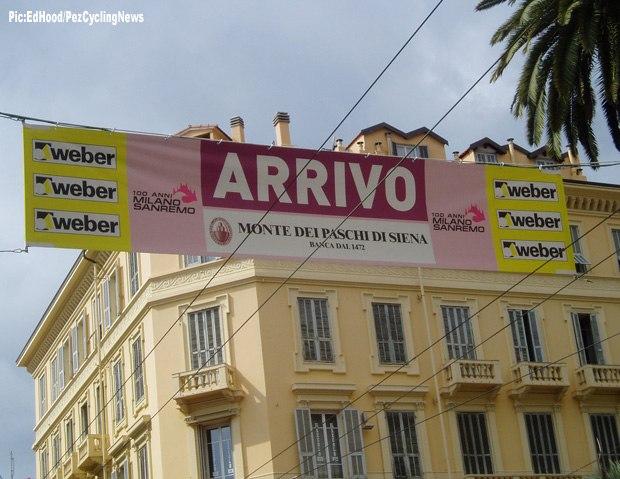 The Via Roma is narrower than it appears on the TV, rises slightly and has horrible cambers to the gutters – that’s why the winners always come up the middle. 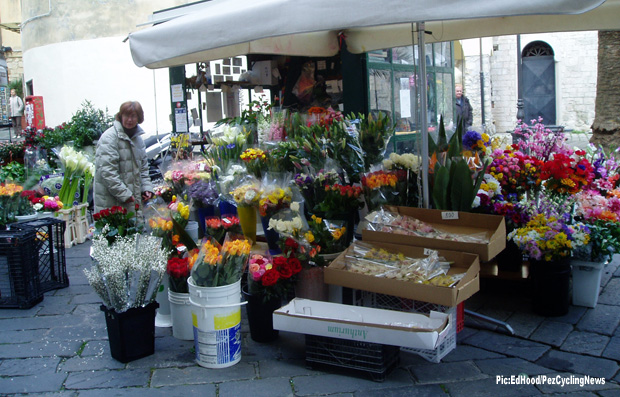 If you win, the City of Flowers belongs to you – and if you don’t, it’s still a nice place to be. 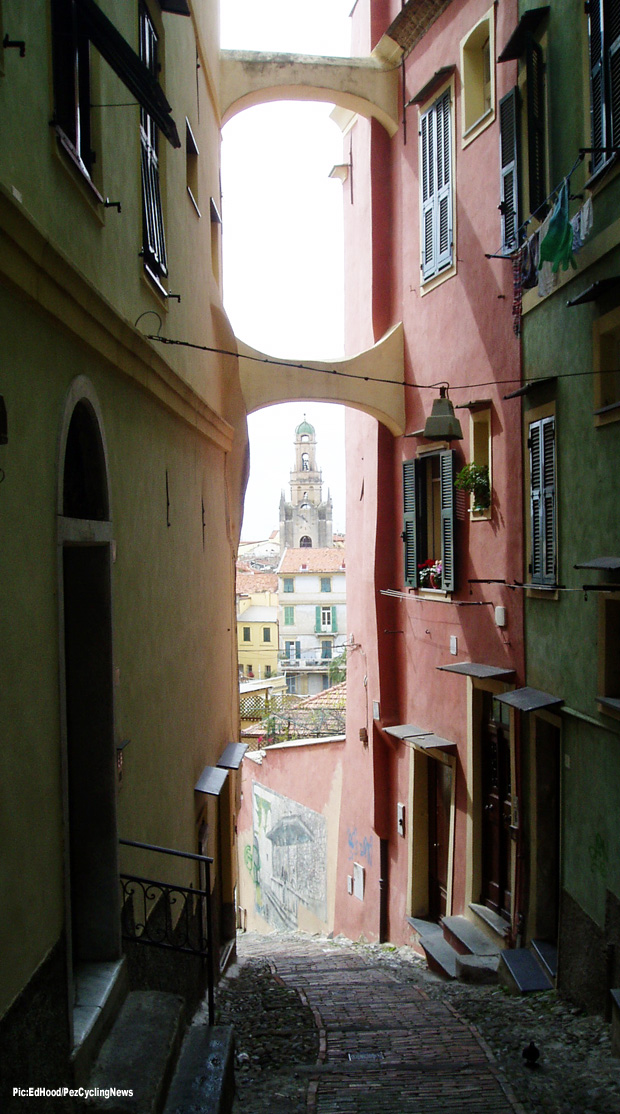 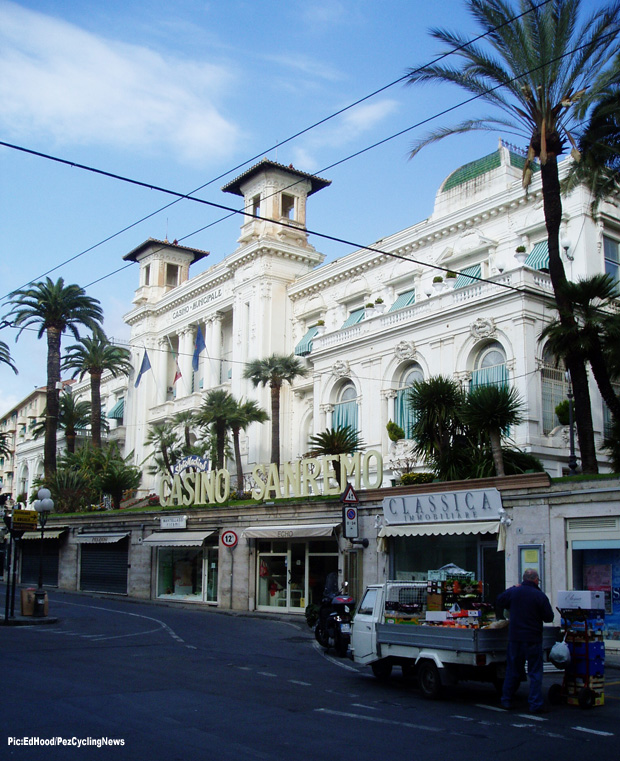 The Old Town is beautiful with lots of cool little bars if you can’t afford the prices in the Casino cocktail lounges?

7) Fabian Cancellara (Switzerland & Trek) he’s still a beast of a man and we note the win in the desert sands but ‘tempus fugit’ and those young bucks want a share of the Legend.

6) John Degenkolb (Germany & Giant-Alpecin) we think that it’s the wrong kind of tough for him but expect him to defend Gent-Wevelgem.

5) Michal Kwiatkowski (Poland & Etixx – Quick-Step) he’s not world champion for nothing and when we went to price was performing very nicely in Paris-Nice.

4) Peter Sagan (Slovakia & Tinkoff-Saxo) has had a handful of second places this season already and winning Monday’s stage in Tirreno-Adriatico shows he’s the man on form.

If there’s one man who can spoil our top six prediction, it’s this dude!

3) Mark Cavendish (GB & Etixx – Quick-Step) we know, he’s been racking up them wins and his Kuurne win was top drawer but we think that there are two guys who want it more . . .

2) Greg Van Avermaet (Belgium & BMC) more relevant to us than his stage win in Tirreno was his performance in the prologue – two seconds off winner Malori and just one click of the second hand behind Cancellara – he’s ready . . .

1) Alex Kristoff (Norway & Katusha) he’s had the wins, so the form is there, he’s rough, he’s tough, he has the selfless squadra – he’s our winner.

PEZ will be there, roadside and glued to the monitor to give you the best in Primavera coverage. Meanwhile, I’ll sit back ready to take the dog’s abuse if I get the predictions wrong – or the silence if I get it right.

• Check Steephill.tv for live internet feeds in your country. 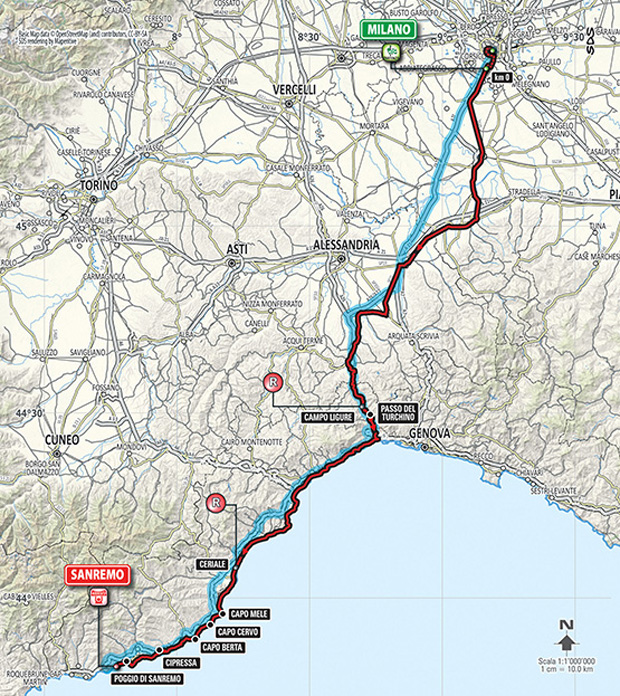