(Montreal, QC – September 15, 2013) The Grand Prix cycliste de Montréal was held today in the downtown streets of Montreal, and over 100,000 people gathered along the course to witness some of the best stars of cycling contest the 205.7 km race. 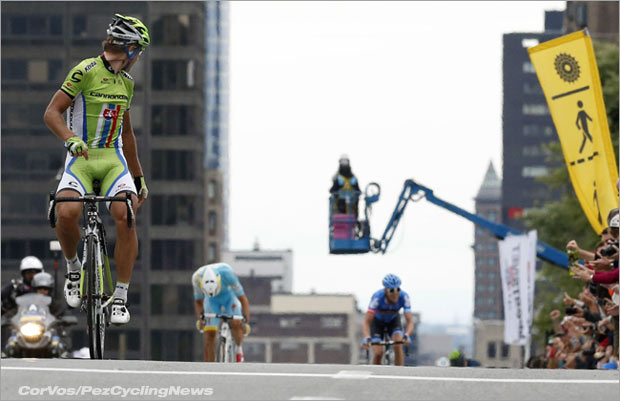 Ryder Hesjedal of Victoria, BC (Garmin-Sharp) ended his season a high note, taking the third place, just five second behind Sagan’s time, and one second behind the second place, Simone Ponzi (Astana Pro Team). Hesjedal has had successes in the past at these two World tour races, taking the third place at this very same race in 2010. The 2012 Giro d’Italia Champion secured his second podium performance of the season (Giro d’Italia, Stage 3, 3), his last appearance on the race schedule for 2013.

For the Canadian team, the objectives was to execute, and leaving everything on the road. And today, both these objectives were met. “We came out of Quebec with a little bit of disappointment. We were definitely hoping to be in the hunt there. We talked together as a team and we wanted to be a bit more on task,” said Team Canada director sportif Kevin Field.

“We didn’t want to miss the break today, and it was awesome to see Zach in the break for Team Canada and Garneau-Quebecor. The way the final ended today, it made for a really super hard Grand Prix of Montreal, most likely one of the hardest we have ever seen.”

Ryan Roth of Guelph, ON (Champion System Pro Cycling) was the top member of Team Canada who finished the race, taking the 79th rank. Ryan Anderson of Vancouver, BC, Antoine Duchesne of Québec, QC, and Nic Hamilton of Victoria, BC all followed shortly after to finish the race.

“We had our fingers crossed to see Antoine, Ryan and Nic be strong for that final. They did their best, and what they could. Ultimately, we have to be honest with ourselves that it is the World Tour, and when the World Tour goes off big, it’s difficult to have speed and depth for guys who are racing at the continental or pro-continental level. “

“Ryan has been riding really well this season, but definitely lacking the 200km of racing. And the same can be said for all the guys here. Great events and racing for everyone on the team, but when you are not doing the 200km races at that intensity, it’s always a little gamble to see how the guys would fare. We walk away from this race happy that they did their best, and realistic about the level they were competing in today.

Zach Bell (North Vancouver, BC/Watson Lake, Yukon), donning the special edition Canadian Champion jersey made by Louis Garneau Sports for these World Tour races, was in the main break that took off early, giving his teammates a well-deserved break in the peloton. Bell stayed within the main group for the majority of the race, before bowing to the public and stepping off the saddle.

“It was not too hard for the break to get establish. They rode hard for a lap or two. The group was pretty happy with the combination that was up there. Everybody worked well. The main group was coming back quickly, and I didn’t have anything left to go any faster.”

Bell was pleased with the outcome of these two events in Quebec and Montreal: “Just like all the races we are starting to have, it gives spectators an opportunity to get up close and personal with both the international stars of cycling and our own Canadian talent pool. They see we are capable, with guys in breaks and guys contesting for a finish. It’s good for the kids to understand that coming from this country, you can get to this level.”

VEILLEUX ENDS PROFESSIONAL CAREER
The race in Montreal marked the very last professional cycling race for David Veilleux of Cap Rouge, QC (Team EuropCar). Veilleux announced on Wednesday that these two races would be his last, and took the opportunity of these two races on home soil to thank the his fans and those who have supported him during all his short but successful career.

Notably, Veilleux wore this year the coveted Yellow jersey from the first to the fourth stage at the Criterium du Dauphiné, a stage race of the World Tour after an unanswered solo attack early in the race. He also became the first Quebec-born athlete to start and complete the gruelling Tour de France.

Veilleux won six Road Canadian Championship titles in the espoir category, including four straight time trial titles from 2006 to 2009 inclusively, as well as winning the criterium title in 2010. At the World Championships in Denmark in 2011, Veilleux impressed many with a solid 19th position.

Zach Bell was thankful for Veilleux’s contribution to the sport: “I intentionally waited for David at the finish line to shake his hand. Sport in Canada is losing one of its best ambassador. Rightfully so, he had an amazing career, in such a short time. I don’t think anybody can fault him to leave the sport when he has. It would have been nice to see him ride longer, but we all understand his motivation. Congratulations to him.

The next event for the road cyclists will be the 2013 UCI Road World Championships in Florence, Italy. Canada will announce its Elite Men selection on Tuesday.