Ashleigh Moolman-Pasio continued her impressive run of form by sprinting to victory in Sunday’s final stage of Giro della Toscana. The result comes after the South African won the prologue on Friday, followed by her Cervélo Bigla Pro Cycling teammates in the next three positions.

Moolman-Pasio held onto the race lead on the second stage after placing third on the day. Both her and team manager, Thomas Campana made mention of the team changing its tactic going into the final stage after using too much energy controlling most of the previous 133km stage.

Lisa Klein initiated a four-rider escape group which allowed the team room to recover and wait to execute the plan on the final hard climb, Valgiano.

“The team did an excellent job, executing everything Thomas wanted. Lisa got into the break which took the pressure off with the bonus seconds in the intermediate sprints and it allowed us to have a relatively easy day in the peloton,” Moolman-Pasio explained.

“Lisa came back to the bunch just before the final climb and the girls did an exceptional job to lead me out onto the climb and then it was my time to pay them back. I attacked on the climb and only Flavia [Oliveira] could follow. I knew I had twenty seconds on her on GC so I was happy to work with her and the two of us stayed away and I sprinted to the stage win and won the tour.”

The stage took place over 97 kilometres, first starting with four laps each featuring the Segromigno in Monte climb. The race then made its way to the finish in Capannori but not before negotiating the 5 kilometre long Valgiano.

“We made a tactical change today because we were a little naïve yesterday and worked too much,” Campana said. “Today we changed the strategy and it worked perfectly. The girls did a really good job. It was the first time we executed something 100% without race radios.”

“Yesterday we did 133km’s on the front to protect the jersey. Today the stage was very hard with five climbs. We needed some riders in the final to set up an attack for Ashleigh on the last 5 kilometre climb. We always made sure we had a rider going in the attacks today. Going into the last climb I pulled Lisa back from the break and the riders set an incredible pace, setting things up for Ashleigh. She had super legs today and could finish the job off. It has been a long season but the girls are still motivated which is great to see,” Campana concluded. 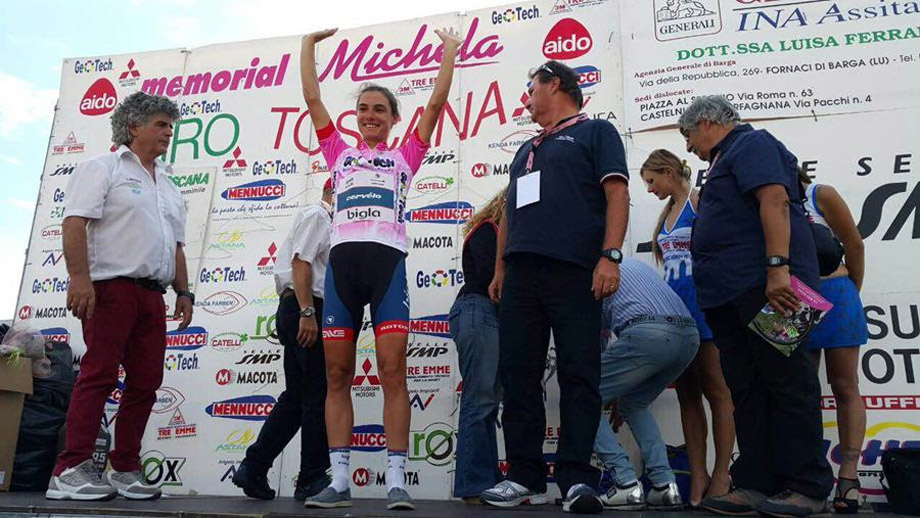