It was a busy day of National Championship road racing for Team Dimension Data for Qhubeka with our African Team participating in 9 separate championships today. Daniel Teklehaimanot, Edvald Boasson Hagen and Kanstantsin Siutsou, who all won their respective time trial championships earlier in the week, doubled up to each be crowned road race champions as well.

With an early start in Asmara, Daniel Teklehaimanot got the day off to a magnificent start by soloing to victory after a late attack in the final 10km of the race. It was Teklehaimanot’s 2nd road race title of his career. Teklehaimanot crossed the line ahead of our Dimension Data Continental Team rider, Metkel Eyob while 3rd place went to Michael Habtom. 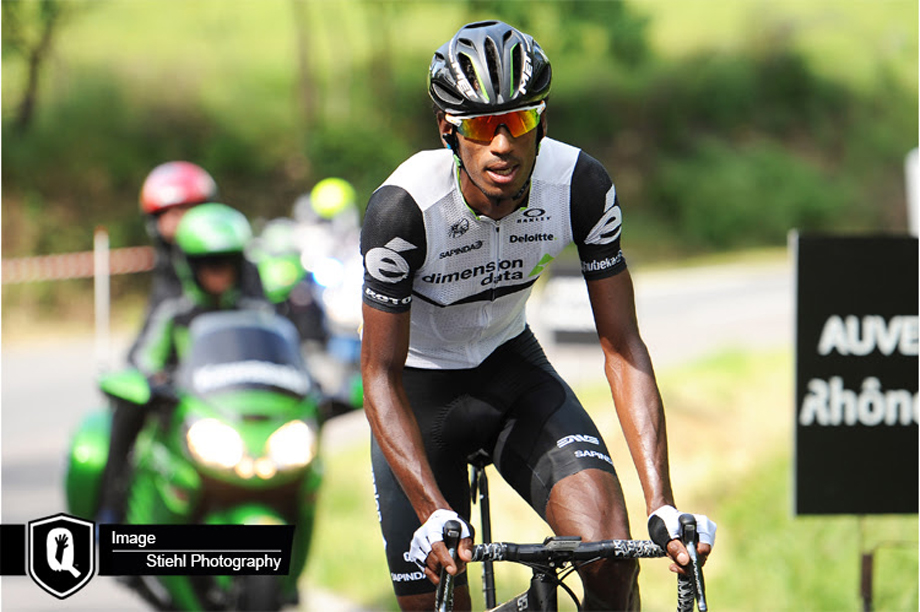 Daniel Teklehaimanot – Rider: “I am very happy for this victory. Today the race was really difficult though, it was a flat course so we had to be on the attack all day to make it hard. The Eritrean jersey is something I am really proud to wear and now, the team is not final, but it is possible that I can show the jersey off at the Tour de France on every stage and not just the time trial like last year.”

The Rwandan National Championships was next to conclude which saw the result decided by an exciting sprint finish. Our young u23 rider, Bonaventure Uwizeyimana, who rides for our Dimension Data for Qhubeka Continental Team was just able to edge out his World Tour team compatriot, Adrien Niyonshuti, to take a fine win.

Adrien Niyonshuti – Rider: “It was a close race. Yes, maybe I am a little disappointed not to win but I won the time trial and now I have more happiness for my friend Bonaventure to win, and to see the talent in Rwanda increasing. This was very special to me because these riders come from my academy and already this year I have been training with Bona and Valens in Italy so I am happy still for the success of Rwandan cycling.”

In Belarus, the excellent performances continued as Kanstantsin Siutsou also soloed to victory after attacking with just over 30km to go. Siutsou crossed the line more than 2 minutes ahead of Nikolai Shumov while Branislau Samoilau (CCC Sprandi) finished in 3rd. It was also Siutsou’s 2nd ever national road race title of his career.

In Italy we had Kristian Sbaragli representing our African Team while Serge Pauwels took part in the Belgian Championships and Bernard Eisel competed for the Austrian title. All 3 riders were in the thick of the action until deep into the race but in the end the trio were not able to challenge for a podium result.

Matt Brammeier kept us all on the edge of our seats right up to the finish in the Irish Championship event. Brammeier was part of the early race deciding 7 rider breakaway but it was Nicolas Roche (Team Sky) who escaped with 10km to go that took the win. After 188km of racing, Brammeier came home just 30 seconds behind Roche with Michael O’Loughlin (Team Wiggins) in 3rd.

Matt Brammeier – Rider: “I’m gutted to not have finished the job off today but a split second of hesitation and there was no catching a flying Roche. I was happy to be up there racing for the win and in the end I am quite proud of how I raced today.”

Edvald Boasson Hagen was the next rider to add to our trophy cabinet as he powered to an incredible win at the Norwegian National Championships. Boasson Hagen surprised all, with a stinging attack in the final 6km to hold on and arrive at the finish in Bodo just 4 seconds ahead of Alexander Kristoff (Katusha) and Kristoffer Halvorsen (Team Joker – Byggtorget). It was Boasson Hagen’s 3rd road title and an impressive 11th national title when you include the 8 time trial titles he has already won.

Edvald Boasson Hagen – Rider: “It was an insanely fast race. Lillehammer Cycling Club was really good today, they raced like seasoned pros to control the race together with Coop. I couldn’t have asked for more out of the Lillehammer boys. It was really awesome what they were able to do. In the final I just had to take it very long. I gave everything I could, there was nothing left that I could give so I am happy that it was enough.”

Mark Cavendish was our final rider in action as he took part in the British national road race. Cavendish rode an incredible race, crossing to a dangerous 14 rider breakaway mid race with 7 other riders. A new escape group of 4 riders then formed and our Manxman, who was being heavily marked, rode a tactically smart race to ensure the race eventually came down to a 13 rider sprint. After 207km it was only half a wheel’s length that separated the Manxman from the gold medal as Adam Blythe (Tinkoff) took the win. 3rd place went to Andy Fenn (Team Sky).

Technological Fraud to be Controlled on 2016 Tour