The Axeon Hagens Berman Cycling Team produced an impressive performance on the first of two stages Friday at the Tour de Beauce.

Neilson Powless won the 19.4-kilometer individual time trial and three of his teammates also placed in the top 10, including United States national road champion Greg Daniel – who held onto the overall lead with three stages to go. 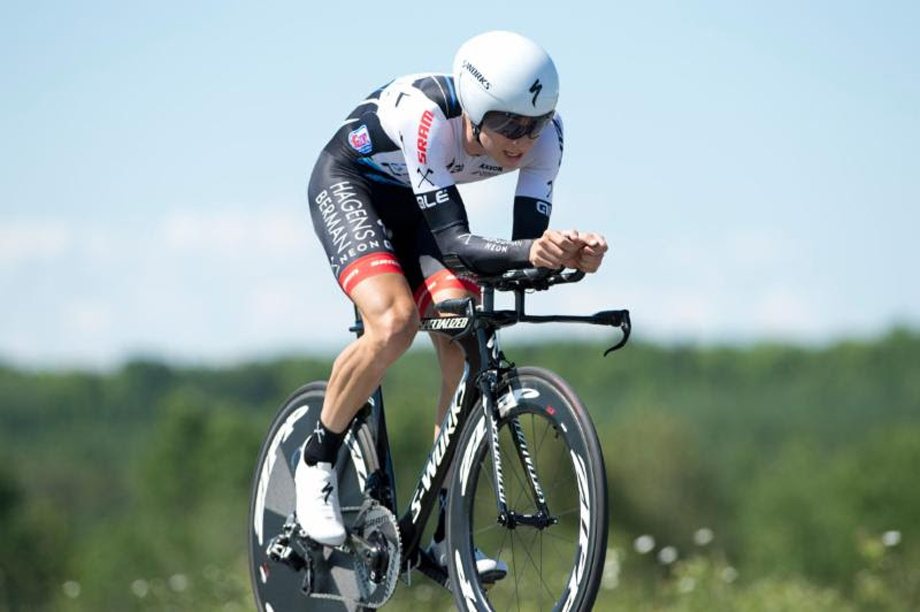 Neilson Powless won the time trial by one second Friday at the Tour de Beauce. (Photo ©Casey B. Gibson.)

After Powless, Geoffrey Curran was Axeon Hagens Berman’s next best-placed rider in fourth, also five seconds back. Teammate Will Barta was sixth, at 10 seconds, and Daniel was eighth, at 17 seconds. That preserved his lead over Houle by seven seconds while Carpenter is third overall, 41 seconds behind.

Powless said he was motivated to go for the stage win after conceding more than nine minutes on Thursday’s stage in service of Daniel, who rode into the overall lead on the summit finish.

“The first half of the time trial was hard for me,” Powless said, “but luckily it was a tailwind on the way out and headwind on the way back. I started feeling better at the turnaround. My legs felt a bit more snappy and it gave me some confidence to know that I was feeling good going into a headwind. The one-kilometer climb with two kilometers to go on the way back gave me a chance to empty whatever I had left in the tank. So when I crossed the finish line there was not much else to give.”

Powless also won the time trial at the Redlands Bicycle Classic in April, the same month that he captured the overall title at the Joe Martin Stage Race. He earned “best young rider” titles at the Amgen Tour of California and at Joe Martin and he leads the USA Cycling Pro Road Tour standings. But on Thursday, the 19-year-old from Roseville, California, took himself out overall contention.

“We tried a bold move yesterday with four of us in a 20-man breakaway,” Powless said. “With Greg and me in there, other teams took up the chance right away and never let us get anything over a two-minute gap. So it was hard all day. With about 30 kilometers to go, I told Greg I didn’t have the legs for the final climb, and that I was going to work for him instead. I figured if he could get to the base of the climb with 30 or more seconds on the field and with a 1:14 gap going into the day, he had a better shot at the overall than I would have, based on how I was feeling. Luckily it paid off.”

Curran, in fourth, enjoyed his best result of the season.

“I am happy with the time trial today, particularly considering the effort yesterday driving the race for Greg,” he said. “I eased into it after a slower-than-usual start and focused on being smooth and in a good position. I got into my rhythm just before the turnaround and held a strong pace to the finish on the way back.”

Daniel said even a last-minute mechanical adjustment before his race against the clock Friday morning could not break his concentration. He had the best time – by 10 seconds – at the turnaround. But the 21-year-old from Sylva, North Carolina, was slowed on the way back by what he termed “shifting headwinds and a sharp and nasty” climb with three kilometers to go.

Friday evening, Daniel and the Axeon Hagens Berman will defend his lead in a 78-km race in Centre-ville Saint-Georges that features four laps of a lumpy circuit.

“I am very confident in my team; we are riding really well together,” Daniel said. “We should definitely be able to hold on if we just race with our heads up.” 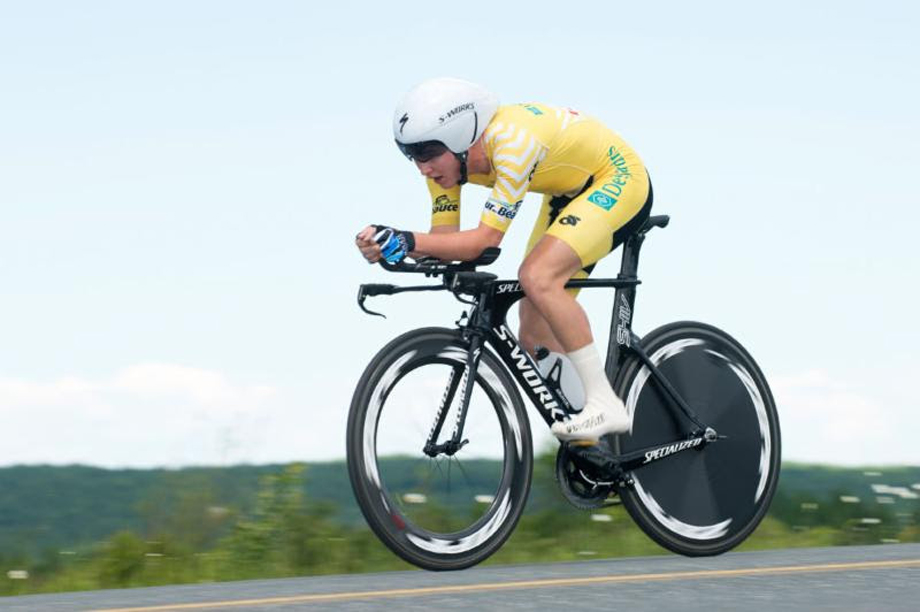 Greg Daniel was eighth in the time trial to keep the leader’s yellow jersey by seven seconds. (Photo ©Casey B. Gibson.)