Olympic Race Report: Fabian Cancellara (Switzerland) turned the clock back eight years today in Rio, taking the Olympic Time Trial championship for the second time – to add to his Beijing triumph. His power, pace judgement and bike handling unmatched on a damp day over a tough, testing parcours beside the Atlantic. 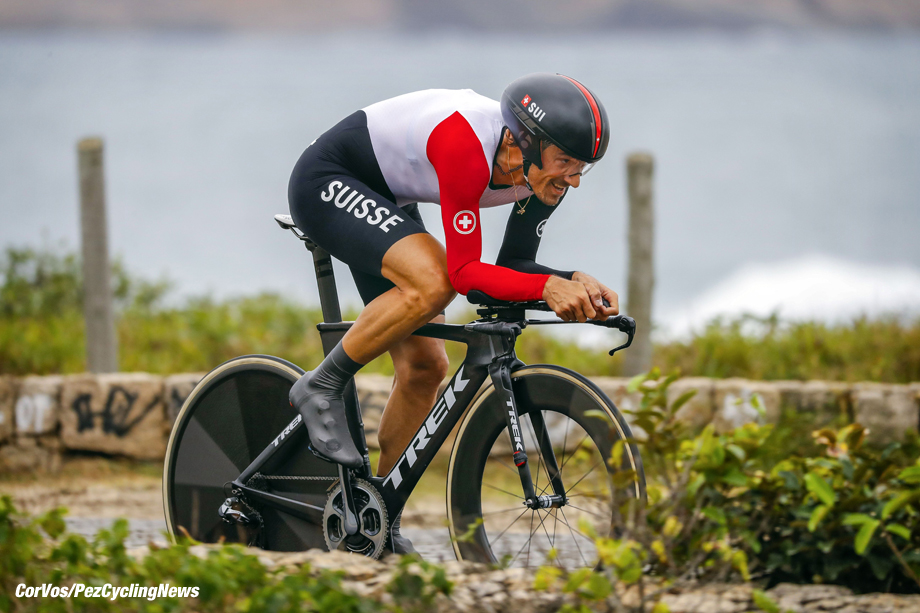 Olympic Women’s Time Trial
The roads were ‘warmed’ for the men by the ladies with the ‘most mature’ girl in the field, Kirstin Armstrong (USA) taking her third consecutive Olympic Time Trial title.

Wet roads and a strong wind greeted the girls along the sea front on a day where strength and experience were everything over one lap of the tough Grumari circuit.

Second was Russia’s Olga Zabelinskaya, the girl with the good genes; her father is the legendary ‘Soukho’ – Sergiej Suchoruczenkow, Peace Race winner and Olympic Champion. 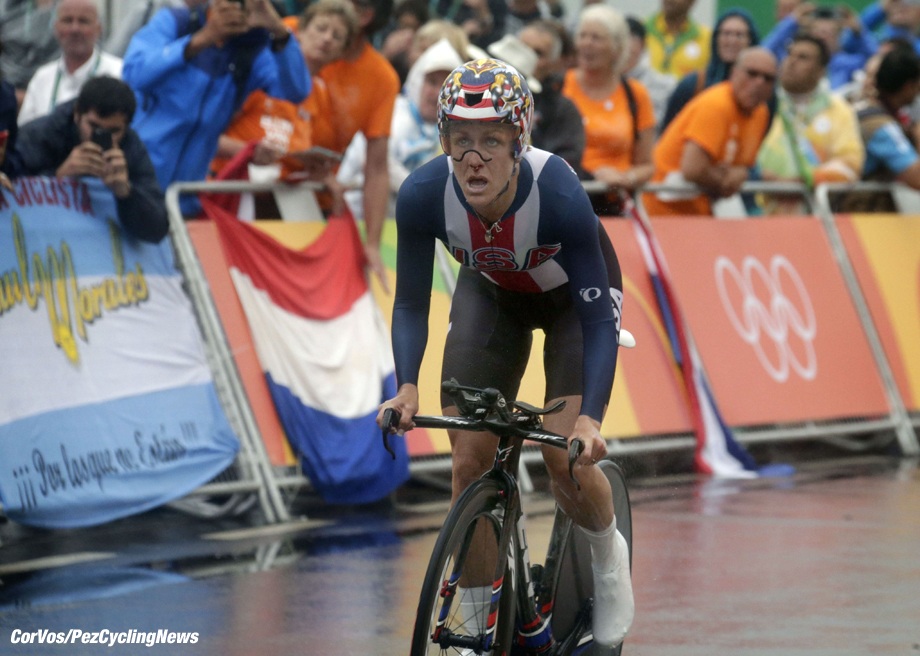 Olympic Men’s Time Trial
The men went off in two waves with Namibia’s Dan Craven on point – Austria’s long and lean Preidler was first to show as on a ride at the first check until usurped first by Poland’s ex-world road race champion, Michal Kwiatkowski then Belgium’s Tim Wellens.

Wellens in turn was deposed at the second check by Czech Leopold Konig. But the specialists were all off in the second ‘wave’ of the race and times were set to tumble later in the day.

Froome and Dumoulin are favorites but many will have observed the strength of a certain Fabian Cancellara on Saturday’s road race with it’s horrible late climbs. And if the name Roglic rings a bell – think Giro time tests.

Boasson Hagen (Norway) is first of the ‘Bigs’ then Canada’s Hugo Houle followed by SkyMan Geraint Thomas (GB). Rising star Alaphilippe (France) is next off the ramp then aforementioned Slovenian former ski jumper Roglic. The man who’s power file graph must have looked like the Pyrenees after Saturday’s road race, Jonathan Castroviejo (Spain) launches next.

Belarus power house Kanstantin Siutsou is followed by Polish ‘Bison’ Maciej Bodnar; as Iran’s Mizbani is first to break the beam with 1:21:39. Czech power house Jan Barta is off with Portuguese chrono specialist Nelson Oliviera in pursuit at 90 seconds – the gap between the protagonists, today. Rohan Dennis the author of the Tour de France’s fastest ever TT in 2015 may be a force today but it’s hard to say after le Tour.

Jon Izaguirre another of those fast Spaniards goes whilst Preidler leads on 1:16:02 at the finish. Despite looking like he’s ‘chugging’ the climb, Thomas goes top at check one as Geschke takes the lead – temporarily – with 1:15:49. 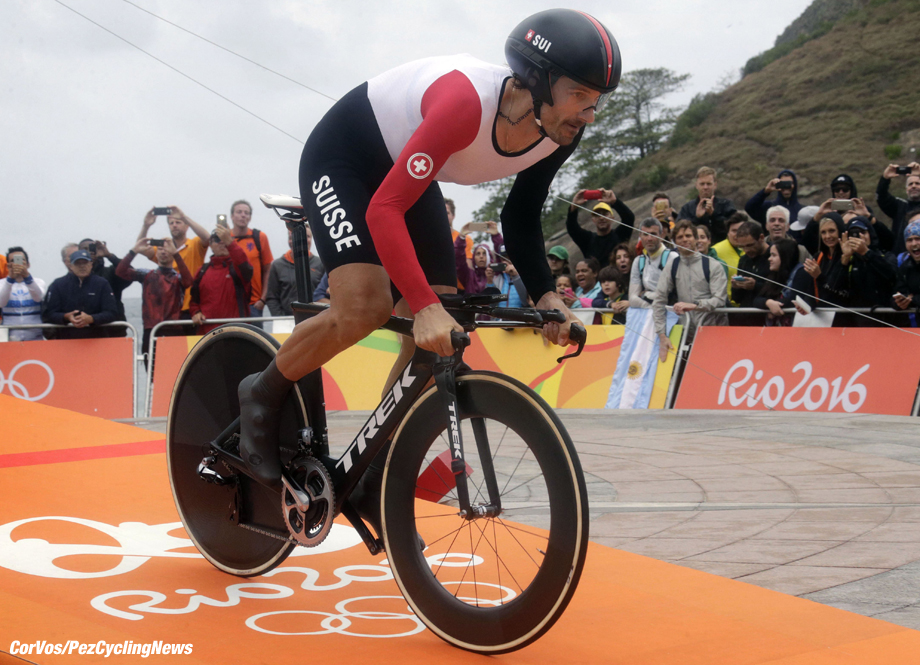 A determined Cancellara at the start

Cancellara out of the gate, like we said – he was very strong on Saturday and few can handle a TT bike like the Suisse.

Phinney rolls (lose the moustache Taylor, please) – then Cancellara’s Chrono King successor now, Tony Martin – the form hasn’t sparkled this year but he did look strong on Saturday, too. The world champion is next Vasil Kiryienka (Belarus) – can he do it? We’ll know in around 85 minutes. Dumoulin rolls, he’s favorite today but what about that wrist, will it hold up? Konig tops Geschke, 1:15:23 to lead. 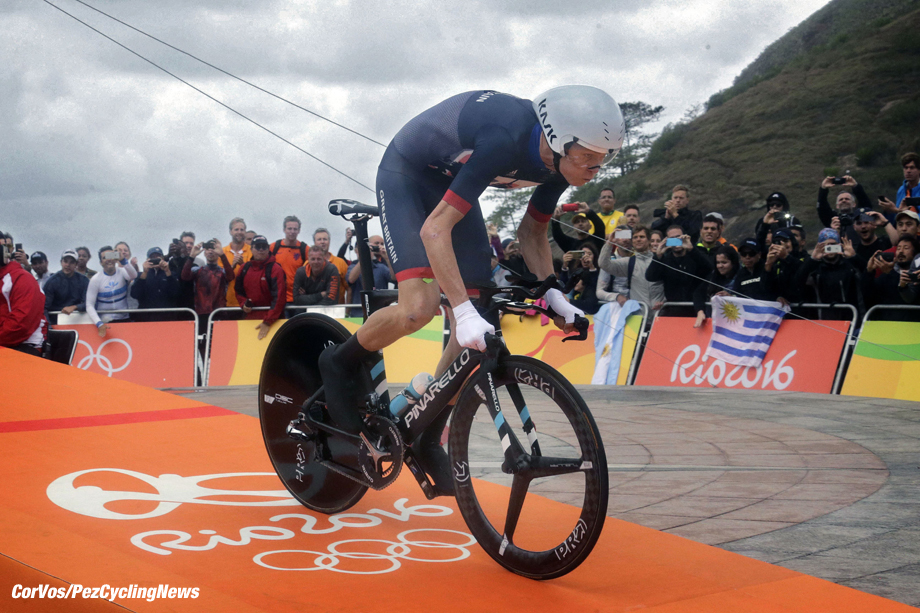 Our last man, Tour winner Christopher Froome of GB – and he’s off out the start house like an elongated ferret. OK, they’re all on the tarmac with Konig in the lead – but that won’t last too long.

Thomas has gobbled up Hugo Houle and looks good, flat back, big gear, not too much upper body movement. Cancellara is charging along the smooth tarmac strip which they’ve laid over the cobbles, no times yet but he looks very impressive. Dennis tops Thomas by five seconds at check one – early days.

Roglic looks rock solid on the climb but the watch tells us he’s off the pace. Cancellara is spinning beautifully up the climb, on the brake levers, out of the saddle from time to time to maintain momentum – he goes top. That’s the part of the course which suits him least and it’s hard to see him running out of gas. . .

Dennis looks good and that looks like a Ceramic Speed chain on his BMC, that special white grease is a giveaway. 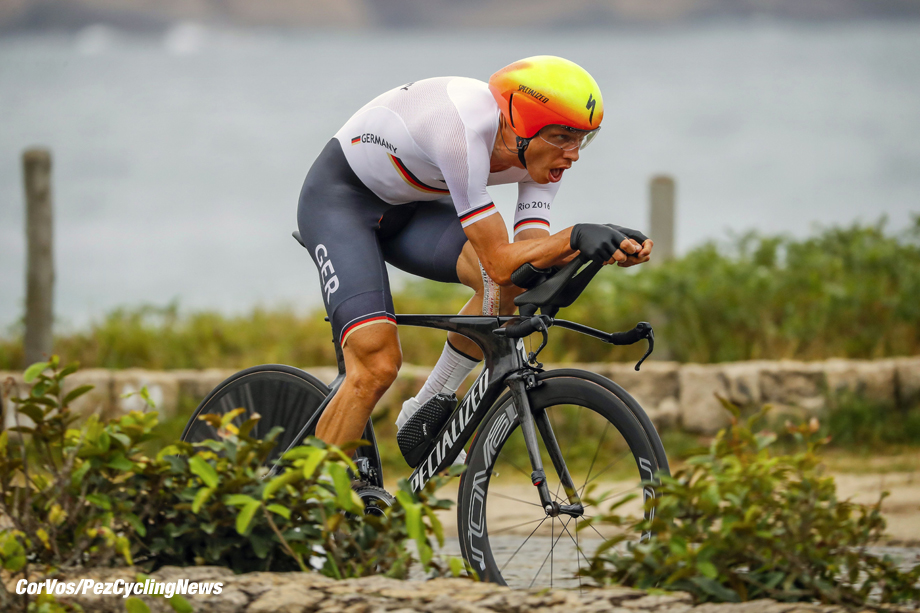 Not a good day for Tony Martin in 12th place

Tony Martin is 16 seconds off the pace at check one; ‘Kiri’ too is off the pace – by 32 seconds. That’s insurmountable. Dennis looks very good, low, smooth, stylish. . . but here’s Dumoulin at check one, well down on ‘Fab’ 14 seconds, wow! The big Suisse is flying, keeping that cadence high – and Froome is 20 seconds off the mark too but it is very early in the day. Dennis drops down to squat on the top tube on the second descent; he’s fastest so far at the top of that second climb. 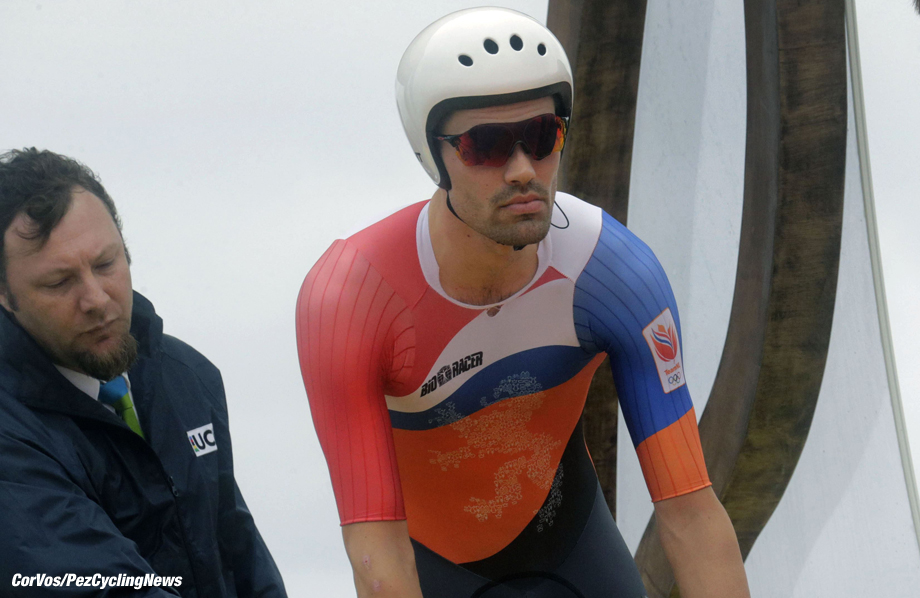 Will a broken wrist be a problem for Tom?

Dumoulin looks to be flying, so powerful, so sleek.

Cancellara is now 24 seconds DOWN on Dennis at check two – Martin is at 50 seconds; ‘Kiri’ is a minute out; Dumoulin too is down, 16 seconds off the pace; Froome at 24 seconds.

Cancellara catches Phinney – the American isn’t the same man I watched melting the tarmac in the Worlds time test in Valkenburg a year or two ago en route silver. Has the Aussie gone out too quick? This second lap will tell.

Dennis fights the wee drag up from the ocean, maybe losing his good form on the bike just a little? 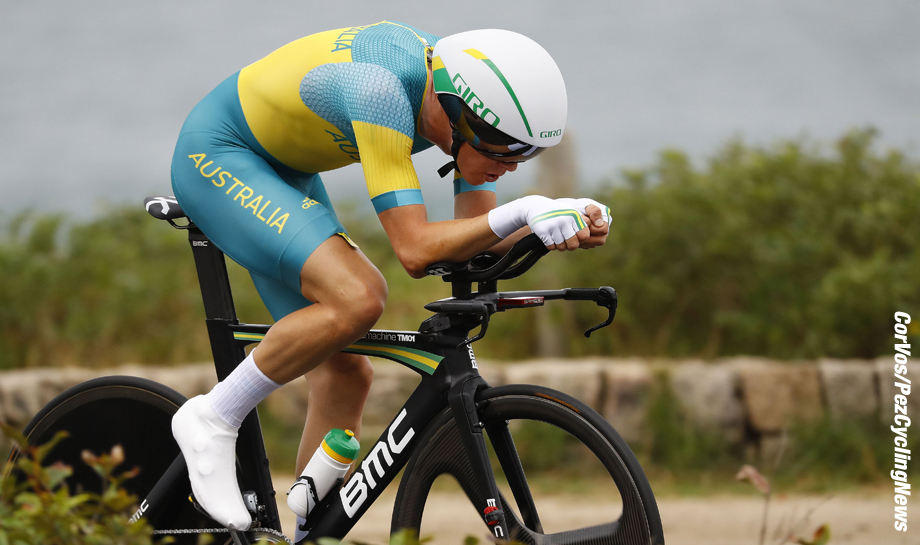 5th for Rohan Dennis with a bike change

Castroviejo leads at check three with Dennis still to come. Dumoulin powers past barriers which have no one leaning over them – Brazilians aren’t big into this ‘alone and unpaced’ stuff. The parts of the course which are out of the wind are still very wet and slippery. Dennis is in a low gear here on the big climb, on the brake levers, shoulders bobbing, this hurts. The top, he leads – 20 seconds plus up on the Spaniard.

The descent is drying – as Dennis’s carbon rims scream for mercy. Castroviejo is beasting that second climb – will he be the shock of the day? Froome is out of the saddle, horsing that Pinarello up from the ocean as we turn to ‘Fab’ who’s spinning that Trek up to the check point, he looks better than Dennis, yes – he’s 18 seconds UP.

He drops like a brick off the summit on dry roads. Froome is driving a monster gear along the side of the cobbles as Castroviejo heads for home. Dennis is off the bike, it’s a change, broken tri bars, it’s over for him despite a lightning change by the Aussie mechanic. Martin is nowhere, ‘Kiri’ is caught by Dumoulin – the mighty are fallen here. . .

Dumoulin is 25 seconds down on ‘Fab’ – just Froome to come – and the Tour winner’s gap is 32 seconds back from the flying Suisse. Cancellara is devouring the tar, the cadence is high, he looks full of riding, still. Castroviejo catches Roglic – another ‘wow!’ 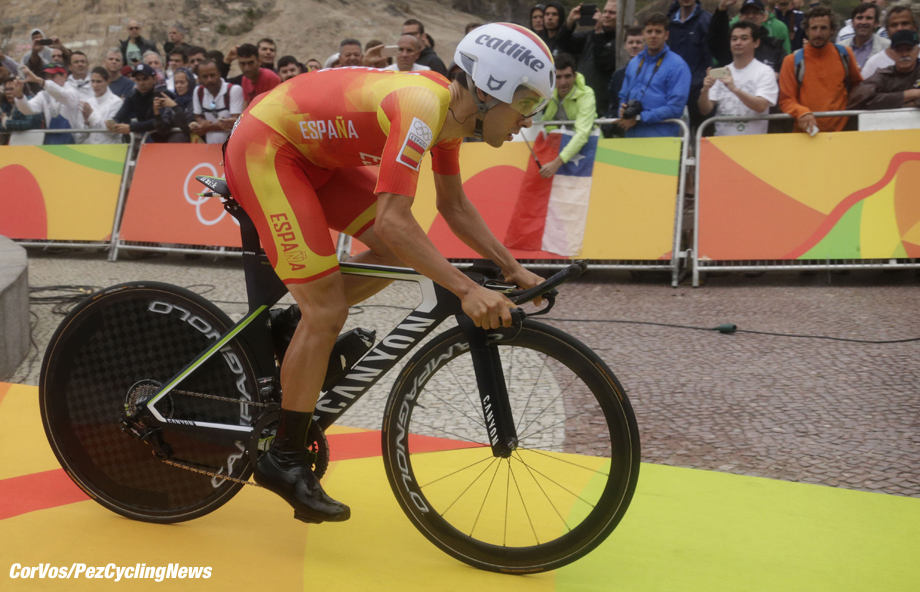 A strong 4th by Jon Castroviejo

Thomas to the finish, 1:14:52 he tops Konig but not by much; but there’s Houle just behind, Thomas caught the Canadian way back – the Welshman must have crumbled, late. ‘Castro’ roars home, 1:13:21 to lead.

Meanwhile out on the course ‘Fab’ is well, well clear of Dennis at the final check, wearing on for a minute up. He hurtles over the wet tar as if it were bone dry. Dumoulin looks ‘blocked’ not the man he was earlier in the day; Froome too is rocking and rolling.

Bodnar finishes, a strong ride to go second – for now. It’s not Tony Martin’s day, wearing on for three minutes in arrears of Cancellara. Dumoulin at check four – he’s down on Cancellara at 32 seconds but 20 seconds up on Dennis. Oliviera puts in a nice ride, Thomas fourth now.

Froome is in third spot at the final check as Dennis finishes; it looks like no medal for the Aussie, Castrviejo has beaten him with Cancellara and Dumoulin still to come. Cancellara is blasting home, a bull of man, on a charge, how does that slim, sleek Trek cope? He’s home, 1:12:15 – coming up the finish straight like a whirlwind.

A minute and more clear of Castroviejo – a stunning ride. Dumoulin is beaten as the clock ticks past 12:15; and there’s Phinney he’s five minutes back; Tony Martin drops three minutes – this is a rout. There’s the big Dutchman Dumoulin, he’s the best part of a minute back – silver. ‘Kiri’ drops nearly four minutes.

Froome – bronze, a minute plus back, he’s finished fast.

Who says time trials are boring? 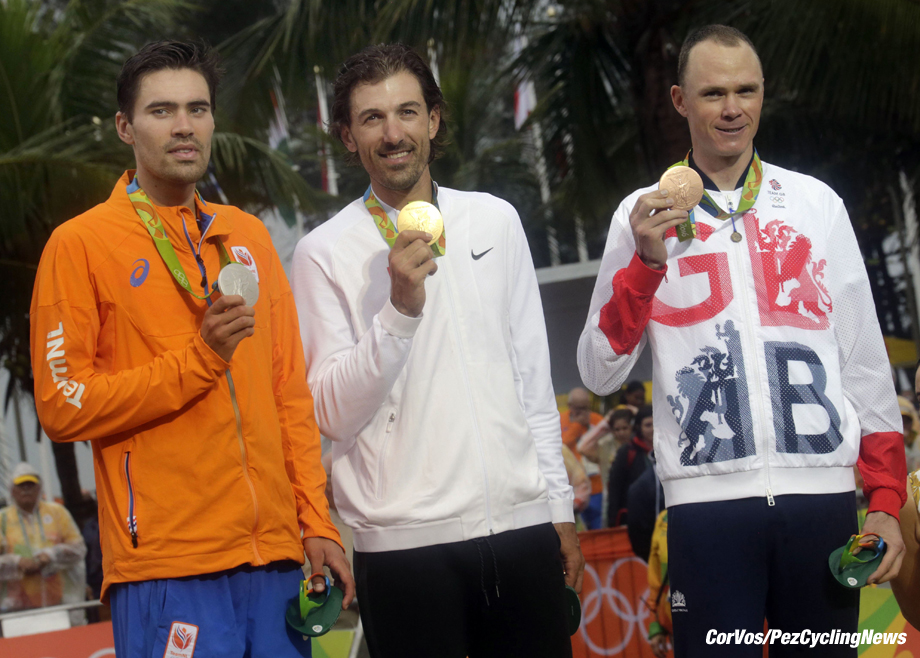 Wanty-Groupe Gobert in France and in Norway