Race Report: In a two-man fight for the line in the first big Classic of the 2020 season – Omloop Het Nieuwsblad – Trek-Segafredo’s Jasper Stuyven got the better of a very strong Yves Lampaert (Deceuninck – Quick-Step). The Belgian race was its usual end-to-end battle with Stuyven and Lampaert together at the finish in Ninove.

** Canadian Fans can watch the racing live on Flobikes.tv.  Tune in Sunday to see Kuurne-Brussels-Kuurne live. ** 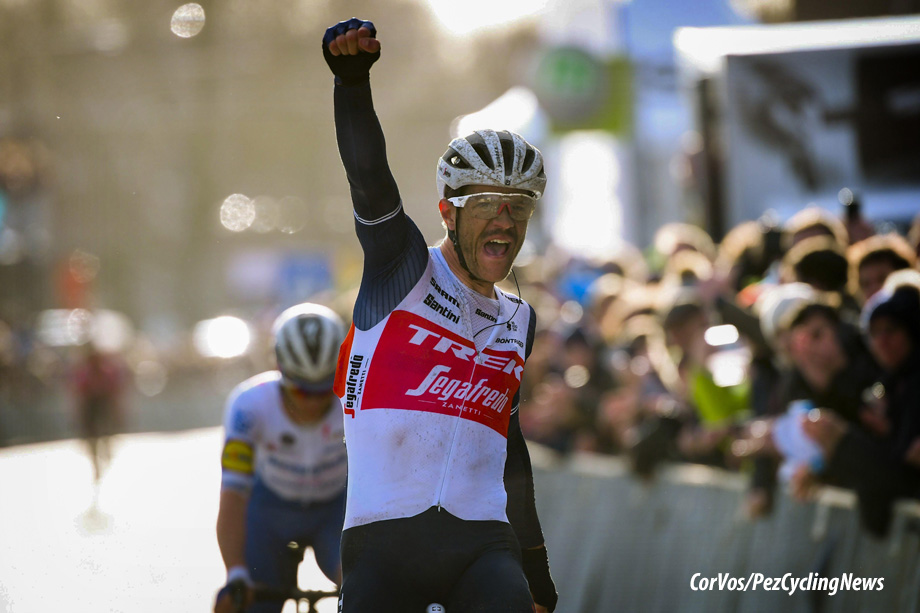 Trek-Segafredo got the better of Deceuninck – Quick-Step

Jasper Stuyven won the 75th edition of the Omloop Het Nieuwsblad. He attacked more than 60 kilometres from the finish with a group of eight riders. In the finalé, he outwit his remaining co-attackers Yves Lampaert and Søren Kragh Andersen (Sunweb). CCC’s Matteo Trentin was a close 4th after a long solo chase. 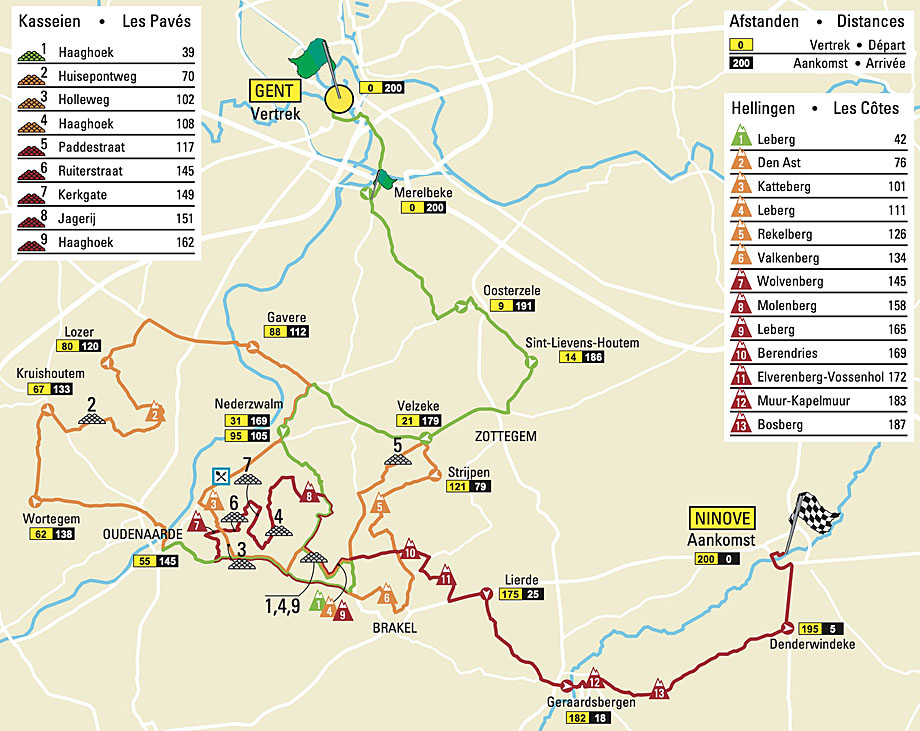 Just after 11:30 the starting gun was fired in Gent for the 75th Omloop Het Nieuwsblad. The race passed through Zwalm region and Oudenaarde got its traditional pass in the first 100 kilometres where the climbs of the Leberg and Den Ast were the first obstacles on the route. From the half-way point the climbs followed at a rapid pace with a climb around every 10 kilometres. The Muur van Geraardsbergen and the Bosberg would be the climax of the day. 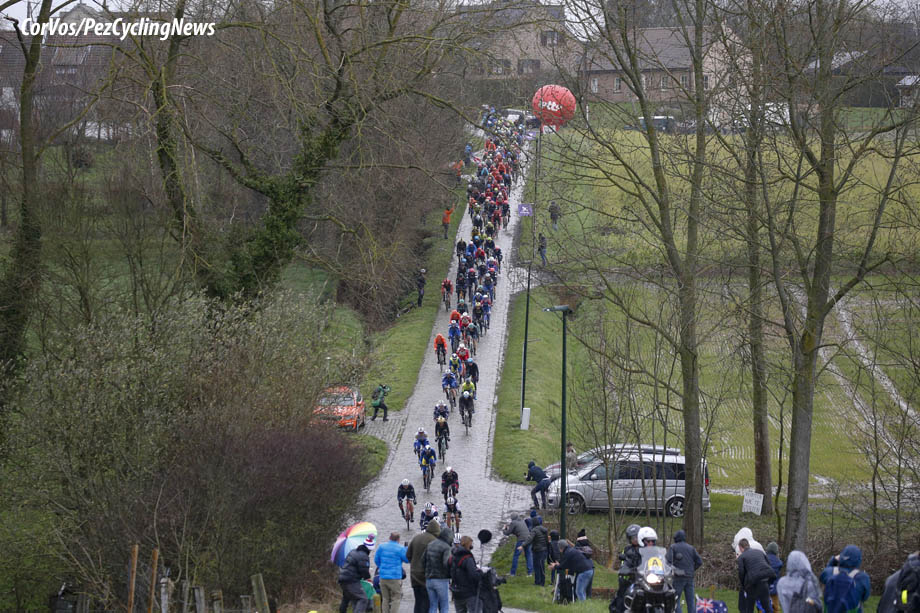 After 7 kilometres, the official start was given in Merelbeke. Laurens De Vreese was the first to try. The Astana rider did not get far, but the game had started early. Five riders eventually got escaped: Teammates Luis Mas and Matteo Jorgenson of Movistar joined forces with Mathijs Paasschens (Wallonie Bruxelles), Senne Leysen (Alpecin-Fenix) and Manuele Boaro (Astana). Kenneth Vanbilsen tried to cross, but was too late. In the first 30 kilometres, the leading group had over 7 minutes in hand. CCC, with Greg Van Avermaet as the top favourite, kept the lead under control. A strong wind made the race difficult for everyone. 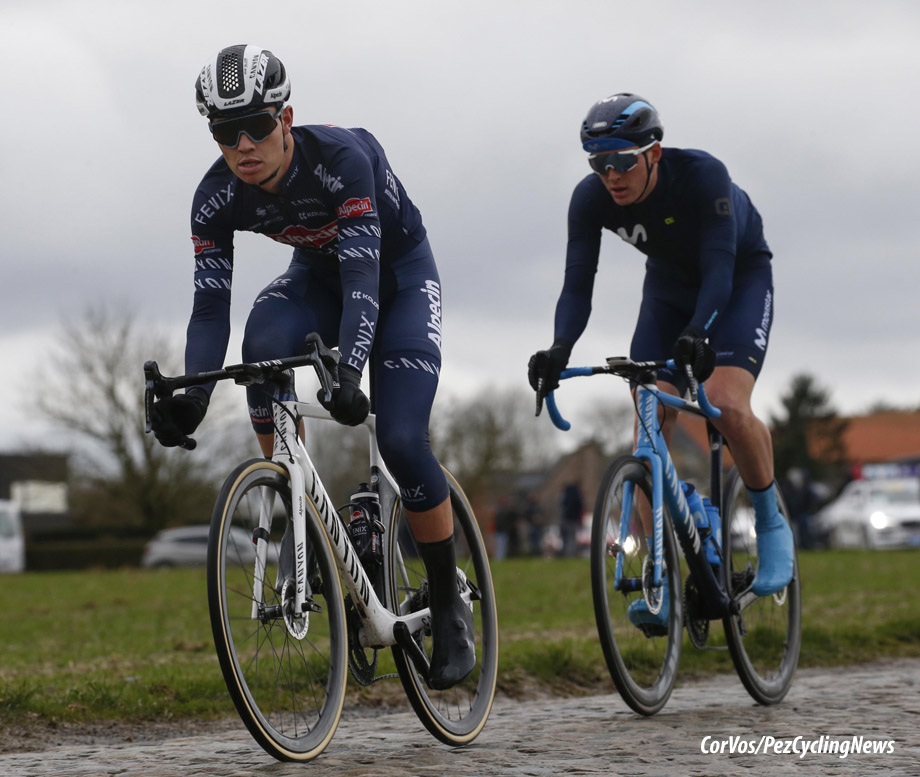 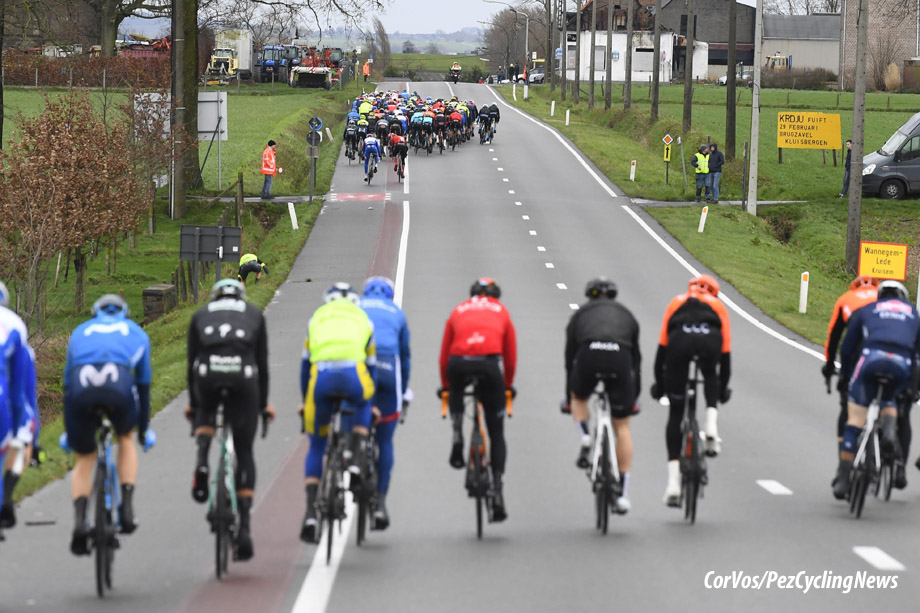 The echelons played a part early in the race

Just after the first climb of the Haaghoek, after 40 kilometres, Trek-Segafredo also started to ride at the front and the lead was reduced to 5 minutes. In the first 70 kilometres the peloton was blown apart by echelons. Tim Wellens, Mads Pedersen, Jasper Stuyven and Zdeněk Štybar were in the front echelon, but the others, including Greg Van Avermaet, had to chase. Just before half-way there was a crash, in which Amund Grøndahl Jansen was involved. The race had been completely blown apart, but after the first 100 kilometres there was a regrouping and the leading group was also caught, allowing the race to basically start again. 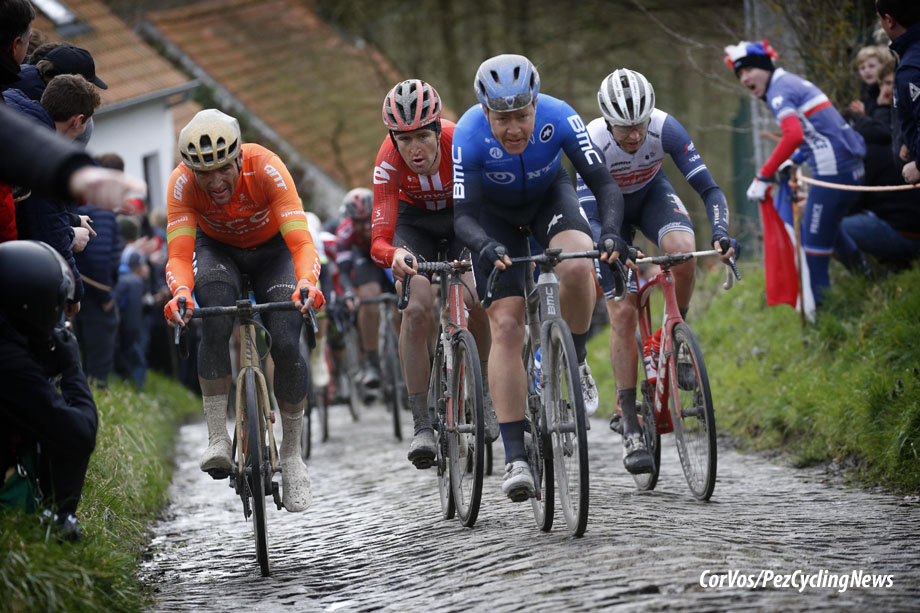 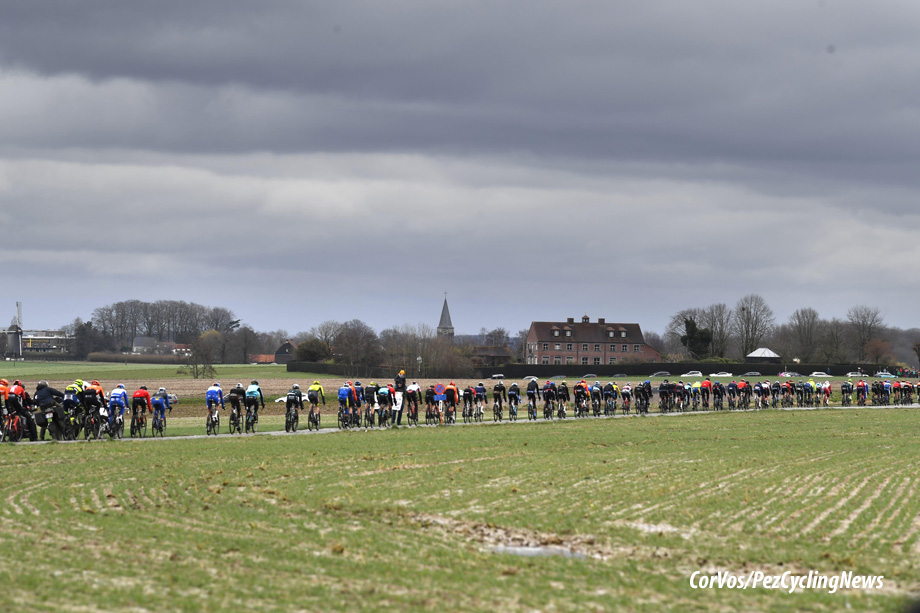 Can only be Flanders

The hilly second section of the race started with the Katteberg. Then just after the Leberg, the next climb, the weather cleared up a bit but the wind was still strong. Yves Lampaert, Wout van Aert, Greg Van Avermaet and Jasper Stuyven caused a split with Van Aert continuing on Paddestraat with more than 80 kilometres to go. The pace eased off again and riders could return to the front. Van Avermaet also tried to get something going, but he didn’t get anyone join to him. 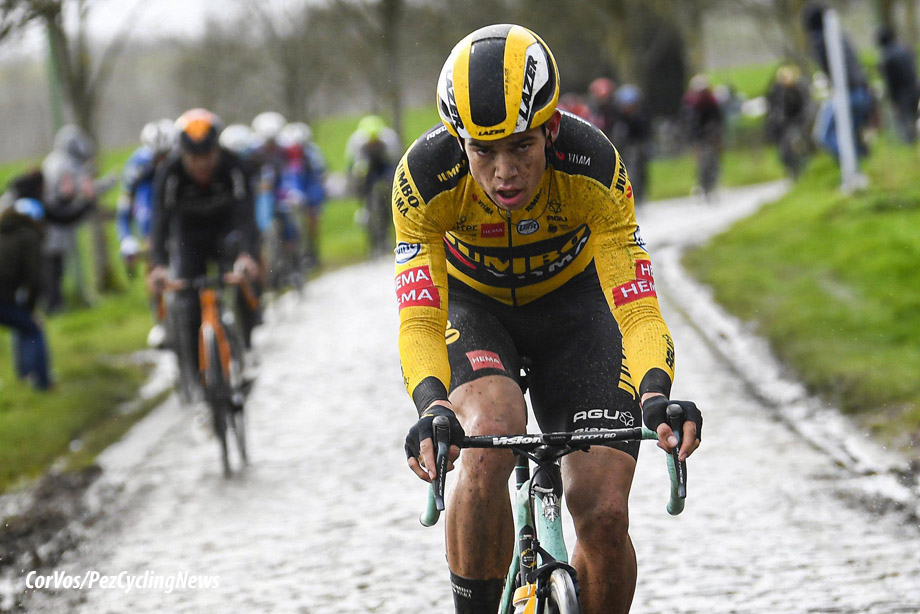 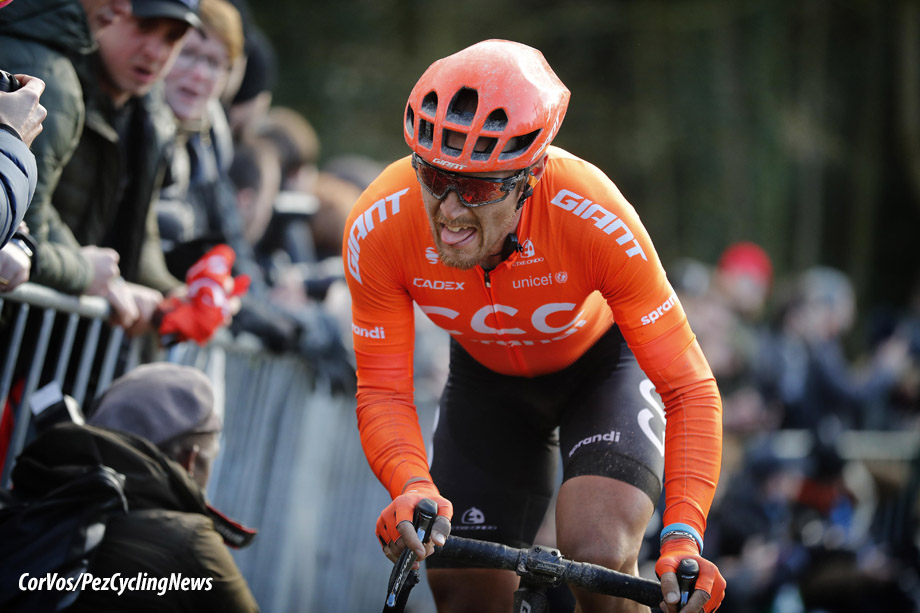 Trentin – Fourth, but it could have been different

It was Matteo Trentin who tried next to get away with seven others. The Italian was joined by Lampaert, Mike Teunissen and Jasper Stuyven, and some others. Tim Declercq, Frederik Frison, Søren Kragh Andersen and Jonas Rutsch also came to the front. Rutsch had a hard time and was dropped. The other seven extended their lead to 1:30, but there was still 60 kilometres to the finish. Deceuninck – Quick-Step with two riders, CCC, Jumbo-Visma, Trek-Segafredo, Lotto Soudal and Sunweb were all represented at the front, which led to the leading group quickly taking more lead on the way to the Wolvenberg after 145.2 kilometres. On this climb, Lukas Pöstlberger jumped from the peloton, but the gap to the leading group was almost 2:30. 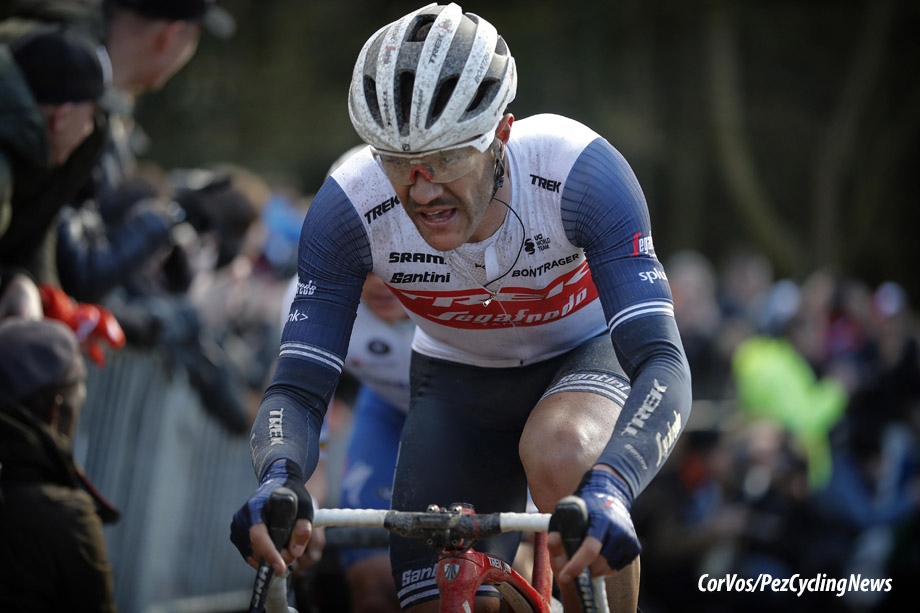 Of the seven riders in the leading group, Stuyven had the best result in Omloop Het Nieuwsblad. The Trek-Segafredo rider was 4th two years ago. Lampaert and Trentin also had top ten finishes, while Teunissen was 12th in 2017. Stuyven was the first to start at the Molenberg, the next climb on the route. At the top of the climb, Kragh Andersen attacked twice, putting Frison and Declercq into problems. In the meantime Pöstlberger had some company, such as Heinrich Haussler, Jenthe Biermans, Pascal Eenkhoorn and Dries Van Gestel. Wout van Aert and Sep Vanmarcke used the Molenberg to cross to that chasing group, but they stopped their pursuit a little later and let themselves pulled back by the thinned peloton. The leading group was on its way to the next climb of the Leberg. 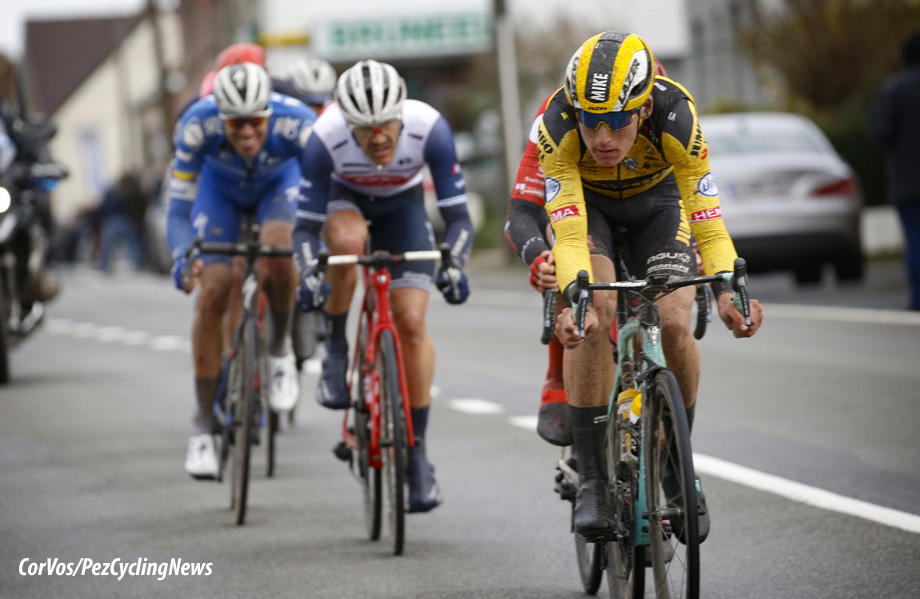 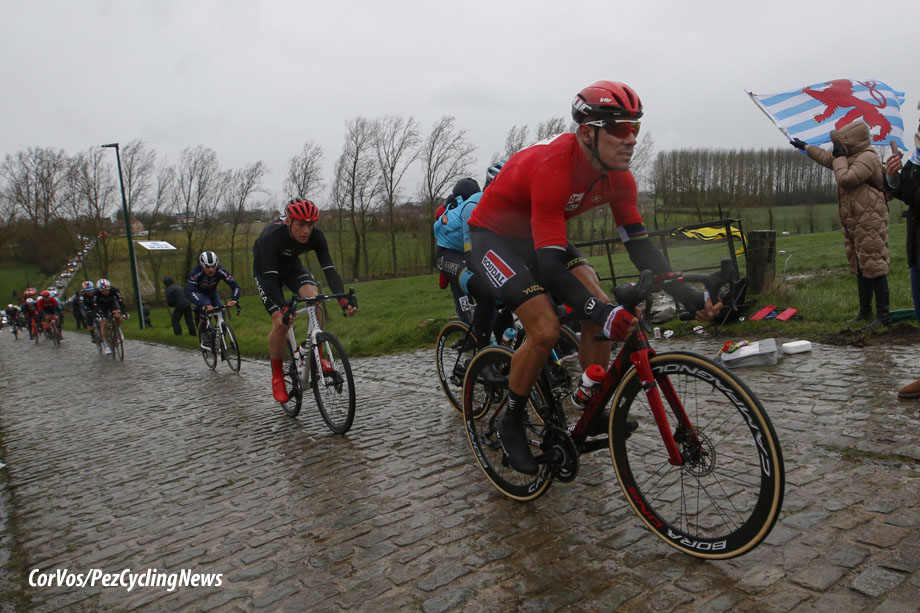 Early in the season yet for Philippe Gilbert

Lampaert and Teunissen led the escape to the top of the climb. The climb of the Berendries soon followed. Declercq worked hard for his teammate Lampaert, but he had to force the others to work with him. Van Aert and Tiesj Benoot emerged from the peloton to cross over to the chasing group. The peloton was not far away and would eventually close the gap to the pursuers. With a lead of 1:40, the leading group started climbing the Muur van Geraardsbergen, 17 kilometres from the finish. Lampaert and Stuyven were the strongest on the Muur, while Kragh Andersen managed to hang on. At the top, the Dane was able to stay with the Belgians. Then it was onto the Bosberg – the last climb of the day. 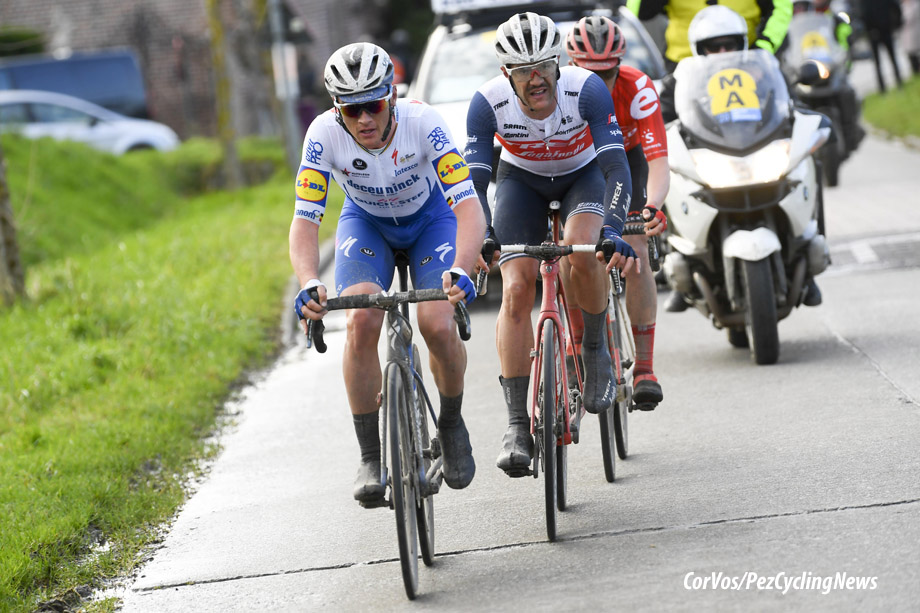 On the Bosberg, Kragh Andersen made a strong move, which meant that Stuyven had to leave a gap. However, the Belgian returned. At that point the three at the front didn’t want Matteo Trentin to come back. The Italian is known for his fast finish. Lampaert accelerated two kilometres from the line. Stuyven joined, but Kragh Andersen was done. Again Stuyven threw in a jump and Lampaert managed to follow. Eventually the race turned out to be a duel between Stuyven and Lampaert. Stuyven went from the front and held his fellow countryman off for the win. Kragh Andersen seized third place. 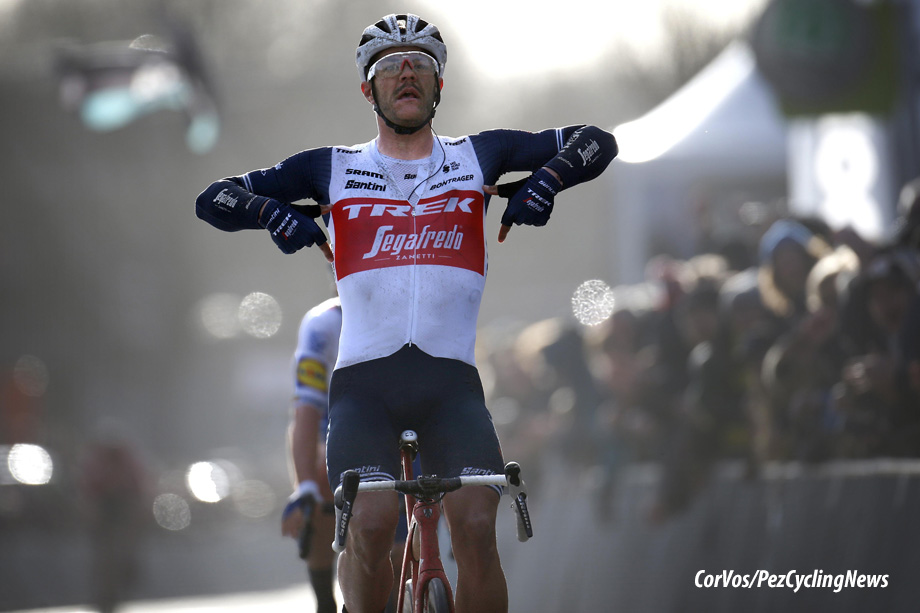