Omloop’17: Van Avermaet All Over Again!

Race report: Peter Sagan started 2017 as he spent much of 2016, animating races with seemingly unending stamina. He led an elite trio with Greg Van Avermaet and Sep Vanmarcke in tow but the Olympic champion was the freshest as he sped clear on the run in to the line and took the win for the second year in a row. 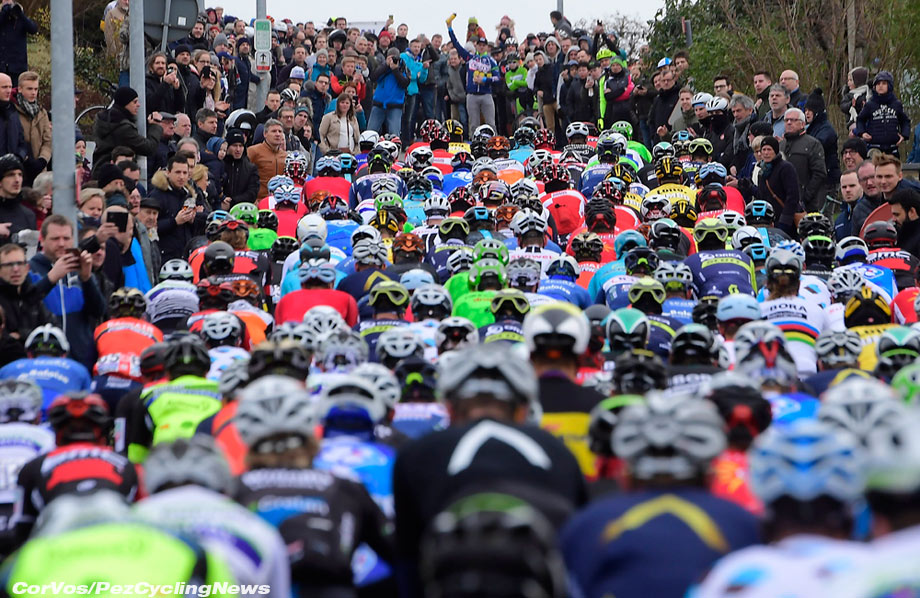 The peloton rode out from Gent under clear but cold skies and the weather remained clear as they took in the 198km parcours around the Flanders region. A six man break animated much of the day and they hung around until late in the race when the trio of Sagan, Van Avermaet and Vanmarcke flew clear. Jasper Stuyven started the drama and Sagan was initially dropped by the acceleration. But when the World Champion got back on he increased the pace and immediately caused a selection at the front. The remaining climbs and cobbled sections continued to whittle down the front group and as they emerged from the final set of cobbles there were only three riders left with the chase group 30 seconds behind. At that point the race was in the balance but the chase fell away and Van Avermaet was the strongest in the final sprint. 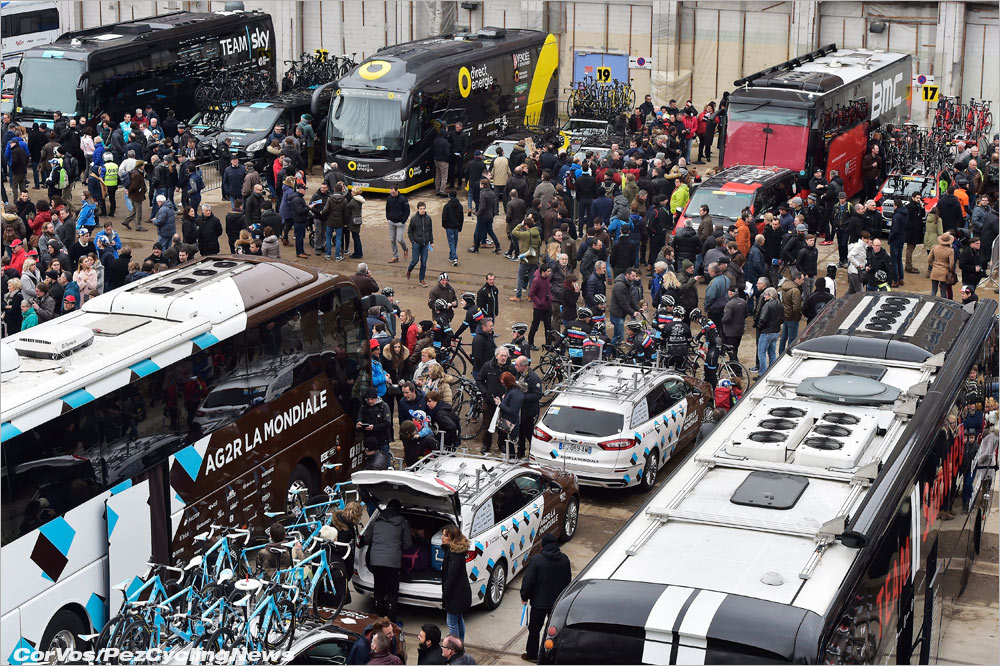 Route
For die hard Classics fans, the real cycling season begins today with the 72nd running of the Omloop Het Nieuwsblad. With a parcours almost 60km shorter than the Tour of Flanders but filled with 13 climbs and 10 cobbled sections, Het Nieuwsblad is packed with action almost from the flag. The riders roll out from Citadelpark in Gent, head south along fairly straightforward roads but when they hit 50km any semblance of order goes out the window as they hare off down narrow country lanes before the final push back towards Gent, where the start has been transformed into the finish line. 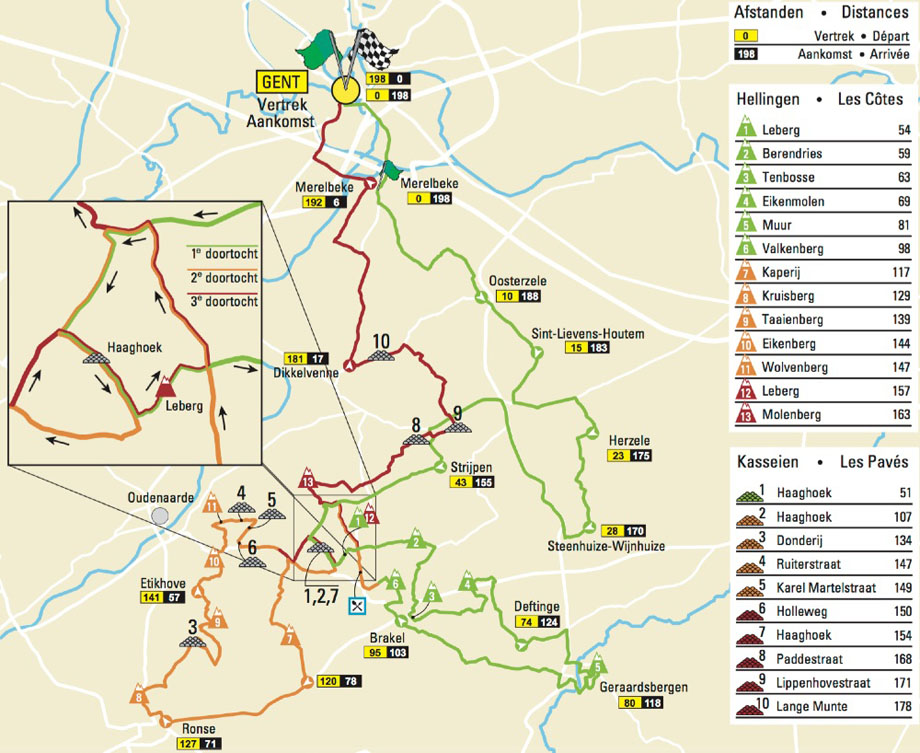 The first climb is the Leberg, after just 58km, but the real racing won’t start until the Valkenberg, which marks 100km to go. From there, it’s a 20km lull until the 7th climb, the Kaperij but after that the final six climbs are all squeezed into a 46km stretch. At the top of the Kaperij the peloton will have to navigate the Kruisberg, Taaienberg, Eikenberg, Wolvenberg, back to the Leberg and finally, the Molenberg. There’s then the 35km run for home, in Gent, which is punctuated by three cobbled sections, totalling 6,100m.

At the summit of the Wolvenberg the riders will be within spitting distance of Oudenaarde, the finish of the Tour of Flanders since 2012. Despite winning the Tour of Flanders three times, Tom Boonen has never won Het Nieuwsblad, or Het Volk as it was named prior to 2009. Another fact to amaze your friends with, is that nobody has ever doubled up at Het Nieuwsblad and Flanders in the same year, despite the races coexisting since 1945. 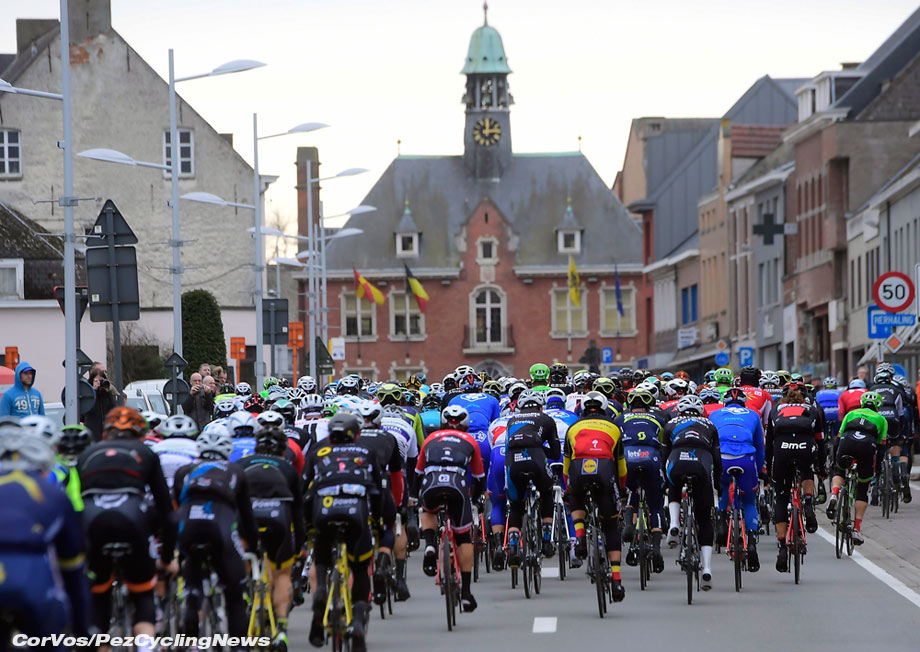 Can’t Catch a Break
The riders set off with the temperature lingering around the 6 degrees celsius (43 fahrenheit) mark but on dry roads. The opening kilometers were quick and it was all too much for Viacheslav Kuznetsov (Katusha) who packed it in within the first 10km. The first hour covered 46.3km and the pace was rapid enough to dissuade anybody from clipping off the front. It wasn’t until the run-in to the Leberg that a break was able to establish, featuring Gediminas Bagdonas (AG2R La Mondiale) and Justin Jules (Veranclassic). They gained 40 seconds quickly but they had kick started some aggression in the peloton and were soon joined by four more riders in Mike Teunissen (Team Sunweb), Leigh Howard (Aqua Blue Sport), Brian Van Goethem (Roompot-Nederlandse Loterij) and Preden Van Hecke (Sport Vlaanderen-Baloise). 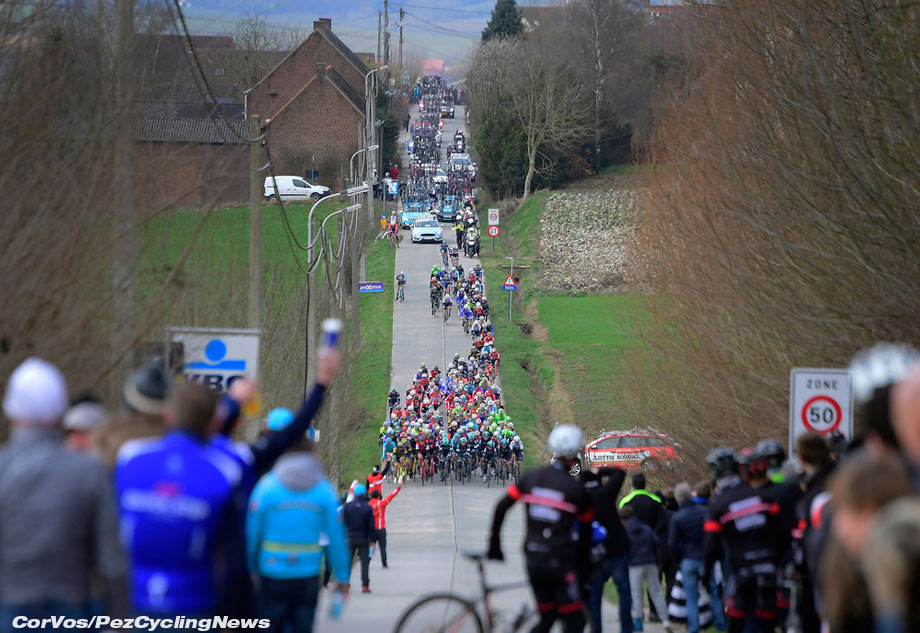 The bunch had navigated five of the climbs but they were eight minutes down on the break, who were rapidly disappearing into the sunset. The Israeli Cycling Academy had missed the break and Canadian Guillaume Boivin was dispatched to provide some representation ahead of the peloton. He was in no man’s land though, three minutes ahead of the peloton but five behind the leading six.

More than halfway through the race and the leader’s advantage was being hacked away at, they now had just 6.25 and Boivin, who had fought alone, wisely knocked it off. There was another abandonment as Zak Dempster (Israel Cycling Academy) crashed and pulled out of the race. 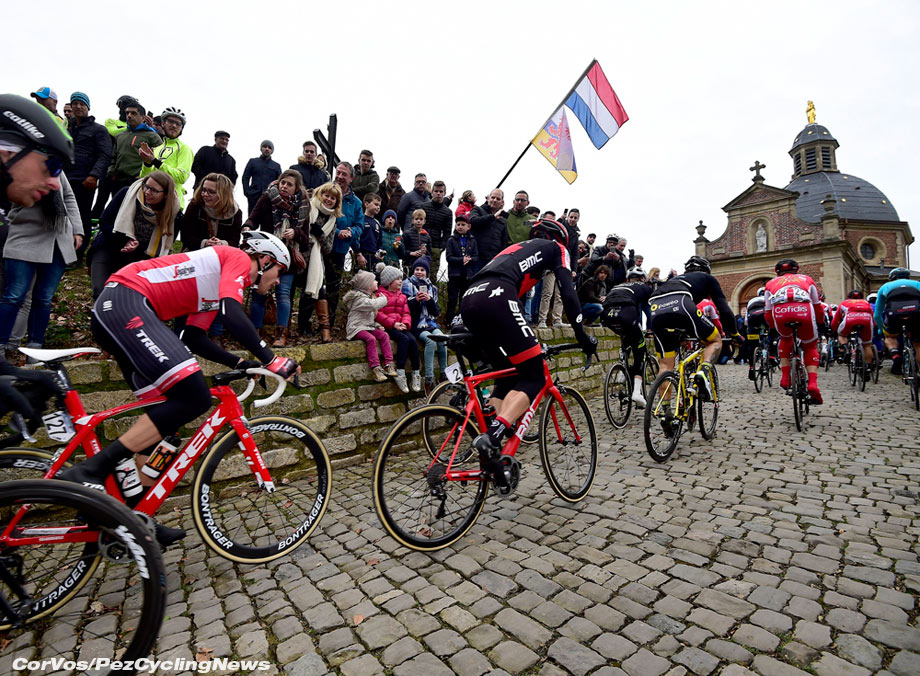 Into the Hills
The six leaders had a gap of 5.30 as they hit the foot of the Kruisberg, they were pursued by a chasing trio of Andriy Grivko (Astana), Alexis Gougeard (AG2R La Mondiale) and Thomas Boudat (Direct Energie). The lead continued to melt away though as Lotto-Soudal and Sky drove the peloton into the crucial part of the race.

The first real acton happened though, not on the hills but on the cobbles at Donderij. A crash with 61km to go wiped out more than half of the main peloton and left both Tom Boonen (Quick-Step Floors) and Alexandre Kristoff (Katusha). There was no waiting up front though and the heavily reduced peloton, around 30 riders, were stretched out as they rushed towards the Taaienberg. 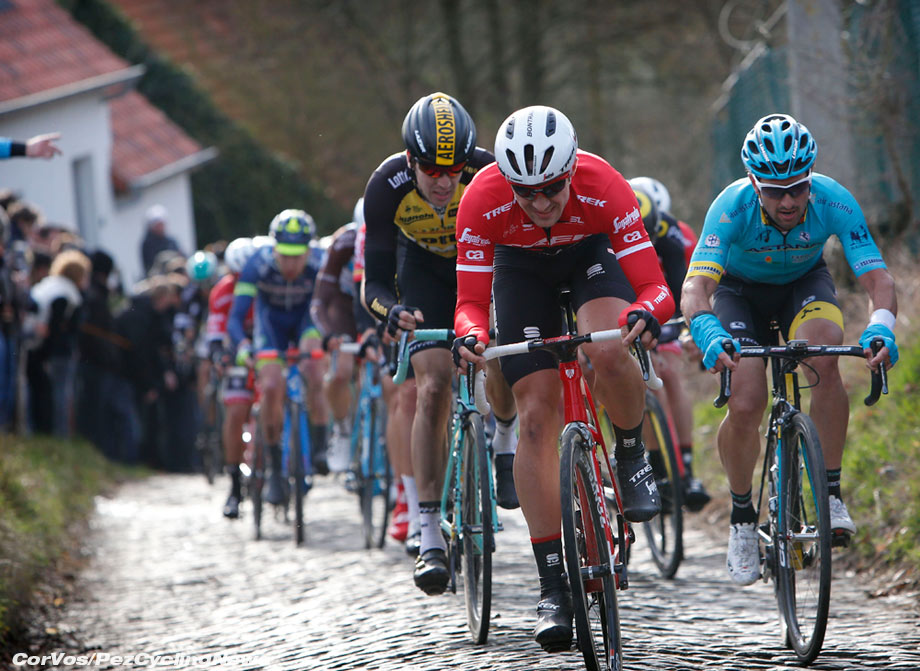 Jesper Stuyven (Trek-Segafredo) stretched his legs on the climb and by the time he looked up at the top he was surrounded by just three riders, including last year’s winner Greg Van Avermaet (BMC Racing). There was a regrouping though and Peter Sagan (Bora-Hansgrohe), who had missed the original break, caught back up. He was isolated though and still 55km away from home, but he was in the ten man elite group.

However, despite his lack of team mates, he stepped on the accelerator ahead of the Wolvenberg and suddenly the elite group of ten was reduced to a second group of five. The World Champion was joined by Sep Vanmarcke (Cannondale Drapac), Van Avermaet, Grivko and Gougeard as they rushed inside the final 50km. The leading group in the meantime had been whittled down to just four as Goethem was dispatched, however, they soon became nine as the Sagan group caught up. With 40km left to ride, and with nobody really willing to assist Sagan the gap was hovering at 40 seconds to a speeding peloton led by Team Sky. 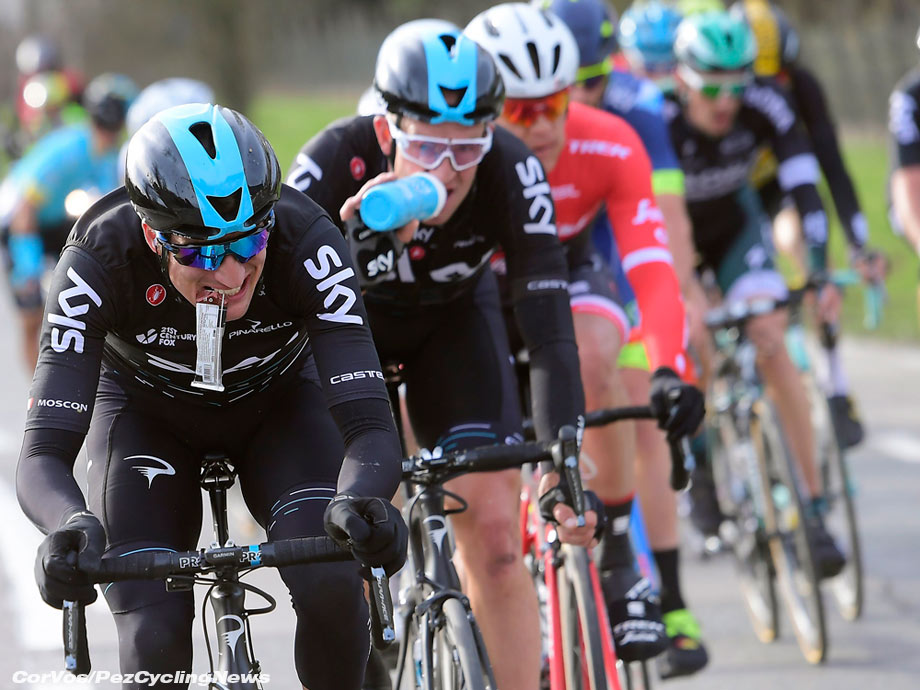 Molenberg
The previous members of the day long break were passengers since they were caught by the Sagan group and both AG2R members were sent packing along with Grivko as the group hit the final climb of the Molenberg. The five leaders were Sagan, Van Avermaet, Vanmarcke, Teunissen and Jules but they were now beginning to be drawn back in to the chasing group led by Quick-Step Floors, whose leader Boonen had abandoned after the earlier crash.
Onto the cobbles of the Paddestraat and Teunissen and Jules, who had been so valiantly hanging on, were unhitched to leave an elite leading trio with the gap still hovering around the 30 second mark.

The chasing group were 15 strong but they still weren’t making the kind of inroads that you might expect. Quick-Step Floors had the trio of Matteo Trentin, Zdenek Stybar and Philipe Gilbert but there were so many passengers in behind that even with the assistance provided by Jasper Stuyven and Fabio Felline (Trek-Segafredo) and Luke Rowe (Sky) the gap was remaining as it had remained for the last chunk of time – exactly at the 30 second mark.

Despite the flat run in the race was now being brought to the boil as the chase organised and began to nibble away at the half minute deficit. 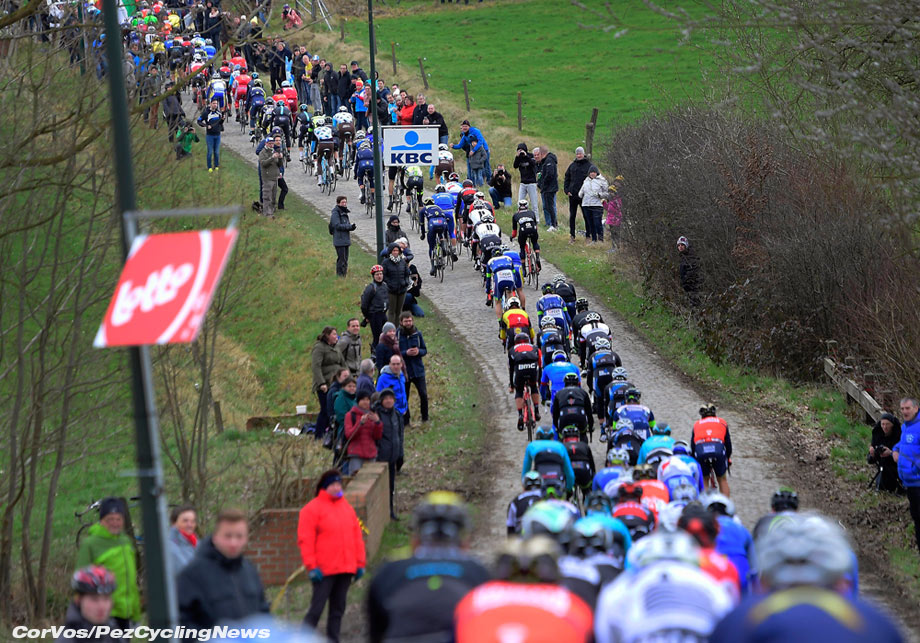 Next Stop Gent
Inside the final 10km and despite the collective chase efforts the time was stretching out to close to the minute mark, it was now clear that the podium was decided and the winner would come from the leading trio.
The work was being shared around as they raced towards the city centre. Vanmarcke was the weakest sprinter but he was still throwing his weight into the pace making. 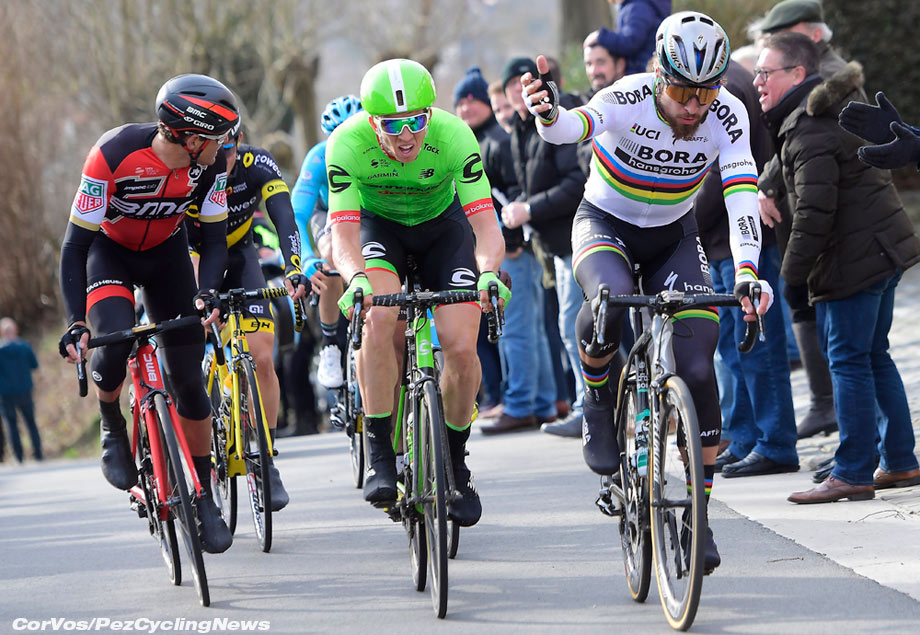 The gap continued to grow and Sagan led the group under the 1km to go flag, he was followed by Van Avermaet with Vanmarcke sat on the wheels. It was a track sprint and Vanmarcke was first to open the sprint but he was jumped by Van Avermaet on the gradual rise. The Belgian was pulling away but Sagan was around Vanmarcke and chasing. 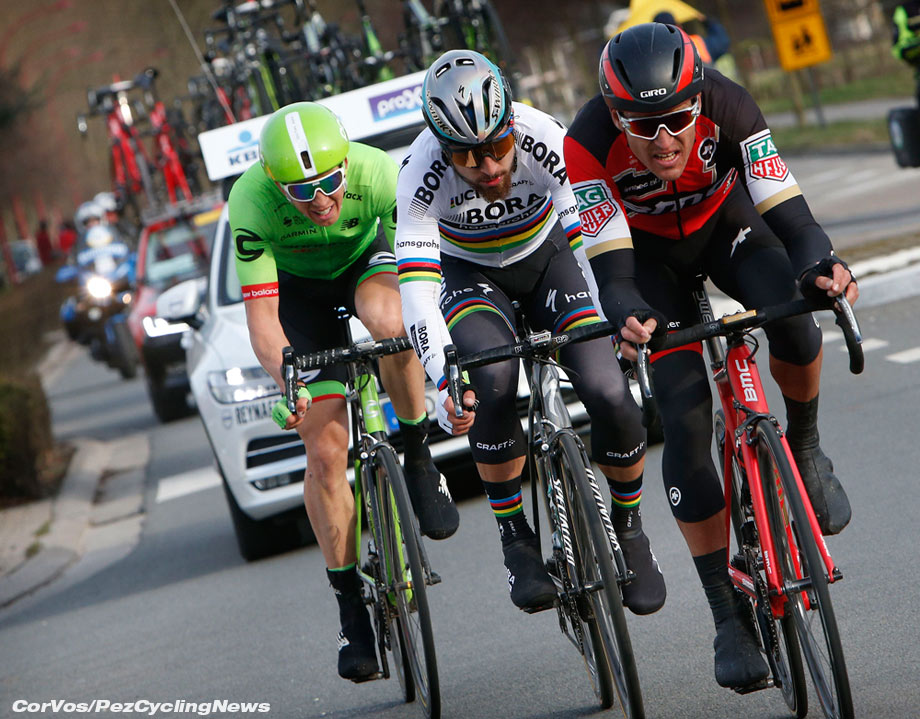 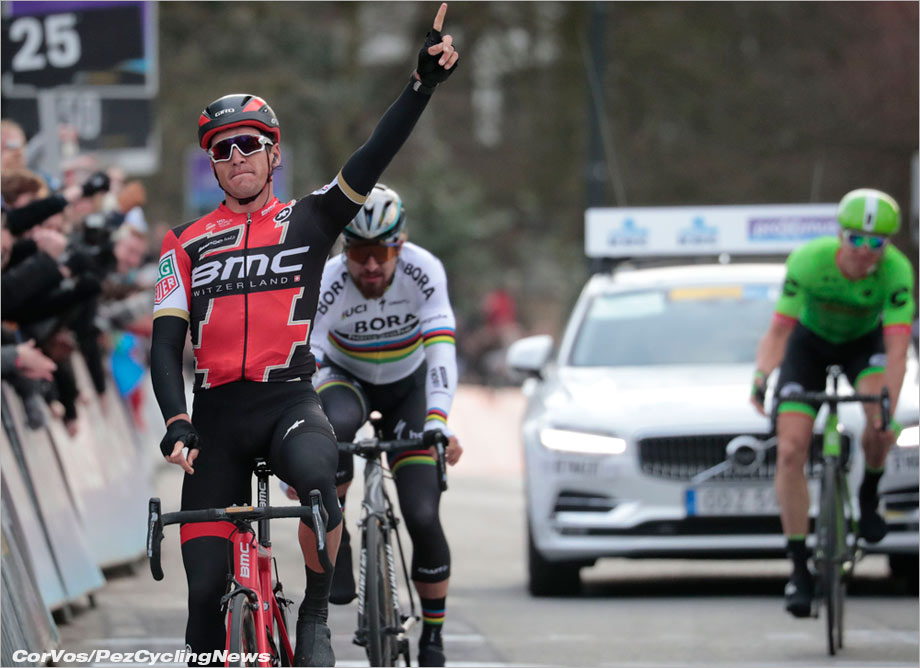 The Slovakian didn’t have the legs though and it was a repeat for Van Avermaet as he took the 2017 Omloop Het Nieuwsblad. Sagan hung on to second and it was yet another podium place for Vanmarcke. Fabio Felline skipped away from the chasing group to record fourth place but it was really a race dominated by the leading trio. 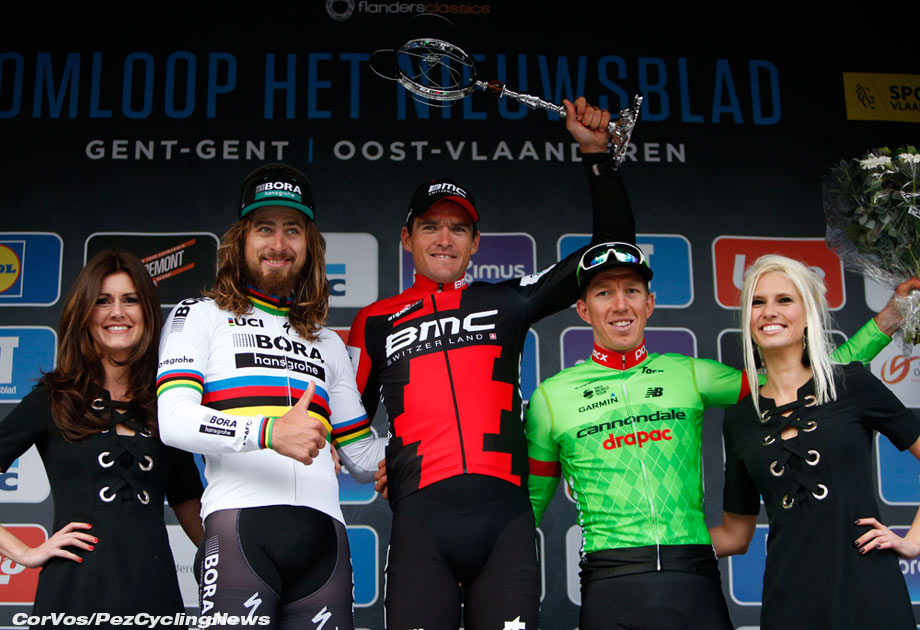