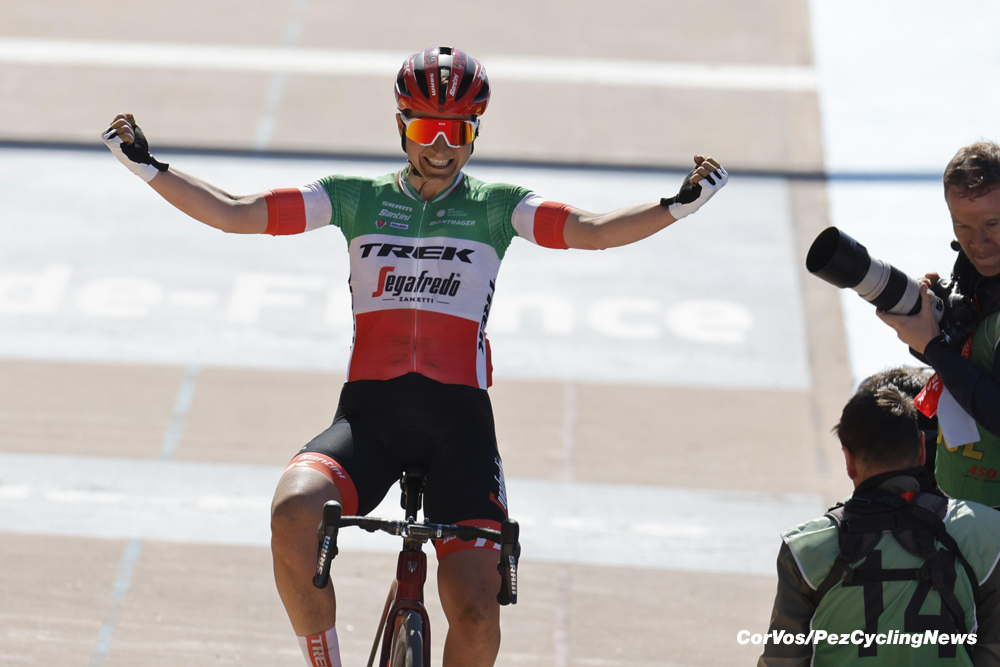 The second edition of Paris-Roubaix for women, the first held in the spring, started without Marianne Vos. The runner-up in last year’s edition had to miss this year’s race due to a positive covid test. Elizabeth Deignan, the winner in October 2021, was also not there, because she is expecting her second child. With Lotte Kopecky, Ellen van Dijk and Chantal van den Broek-Blaak, there were still plenty of favourites. 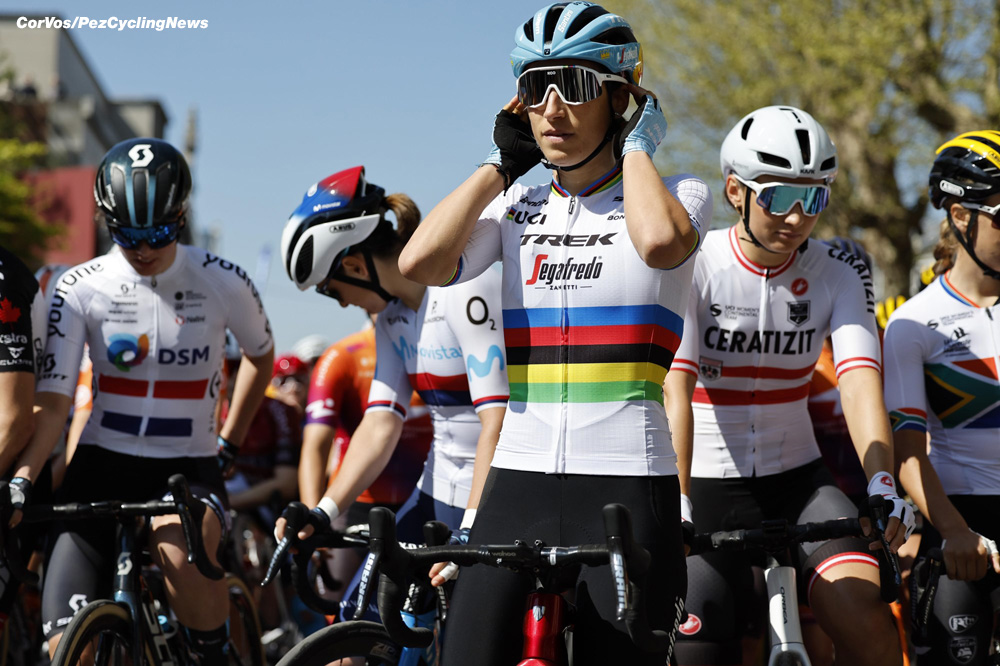 It wasn’t to be the World champs day

The Route:
Just under 125 kilometres, with 29.2km of cobbles, spread over seventeen sectors. Compared to last year, the race is 8 kilometres longer. Like last year, the women’s race will start in Denain, best known for the Grand Prix of Denain. The race starts with four circuits of 8.3 kilometres in and around Denain. The peloton passes through Haveluy, but unlike the men’s race, there are no cobbled sections, that starts between Hornaing and Wandignies-Hamage, after about 42 kilometres. Deignan put in her attack on this section last year with 80 kilometres to go. 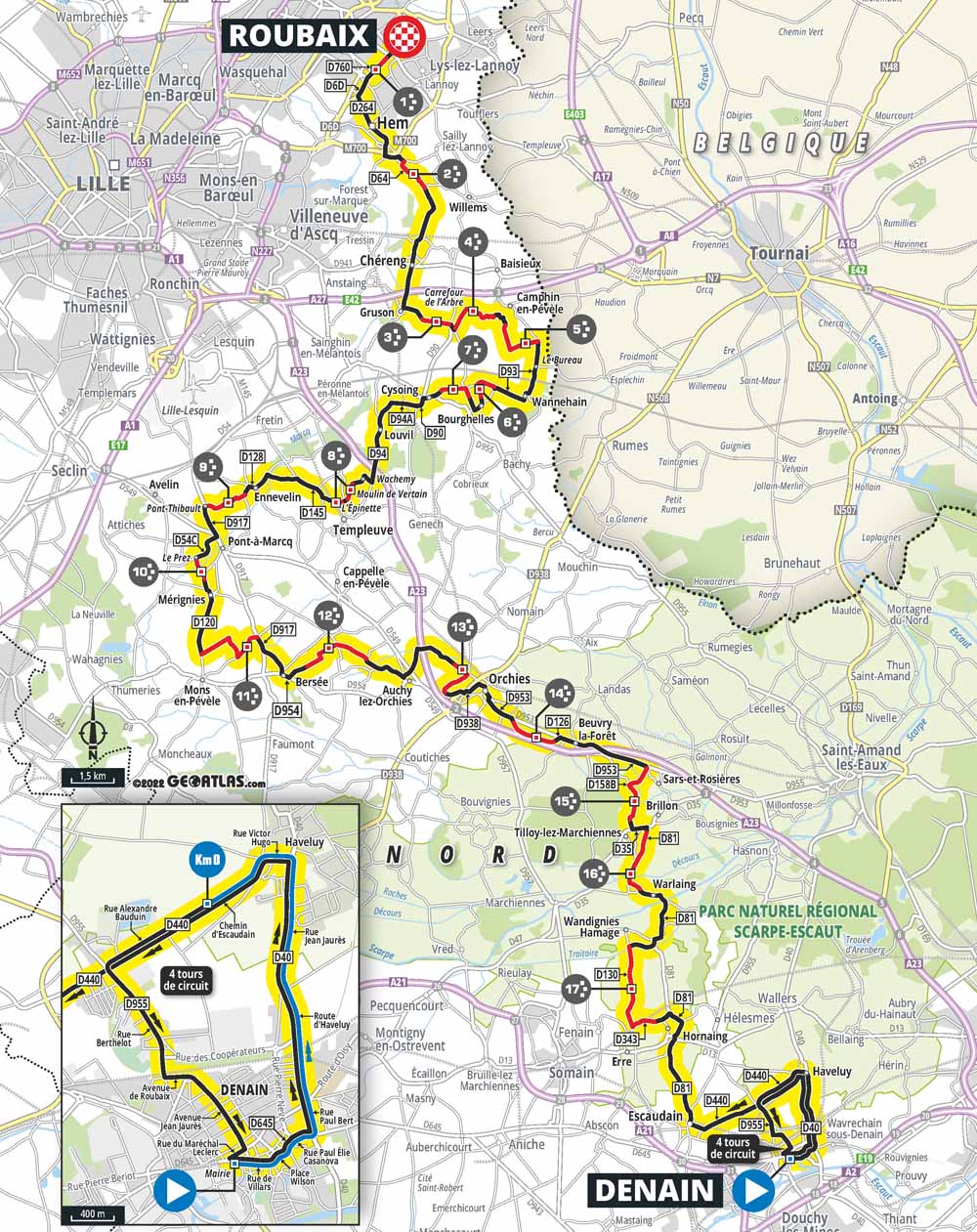 The next 80 kilometres are over the famous cobblestones and asphalt, cobblestones before the legendary concrete of the Vélodrome André Pétrieux in Roubaix. The most famous sections are those of Mons-en-Pévèle and Carrefour de l’Arbre, both 5* sections. Although the race can split at just about any point. After all, in Paris-Roubaix you always have to be on the lookout and good luck plays its part. 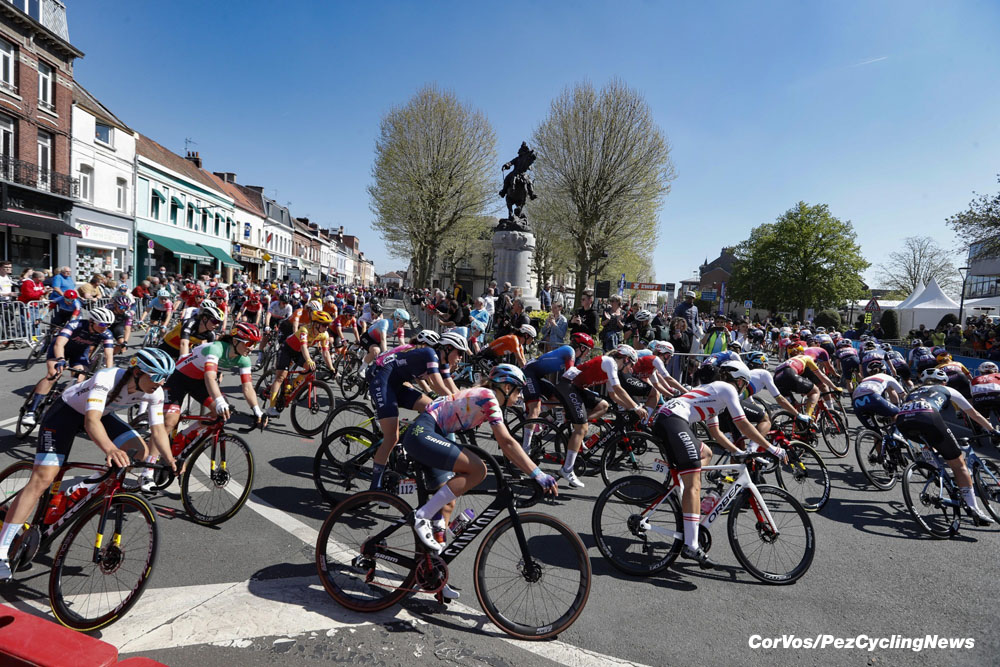 The peloton passing through Denain 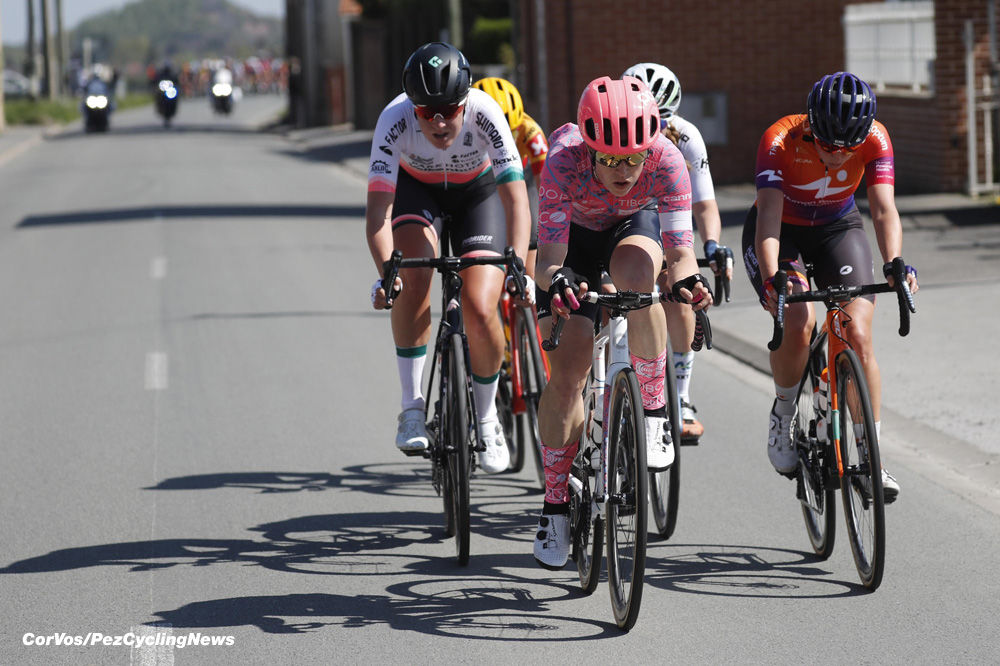 The early ‘break of the day’

Marta Cavalli had already hit the asphalt. The French rider, who won the Amstel Gold Race last week, was able to continue, unlike Julie De Wilde, who had also crashed. The leading group thinned out from five to three on the 3,700 metre first section. Lutro, Masetti and Erath were left at the front. Erath eventually went solo. 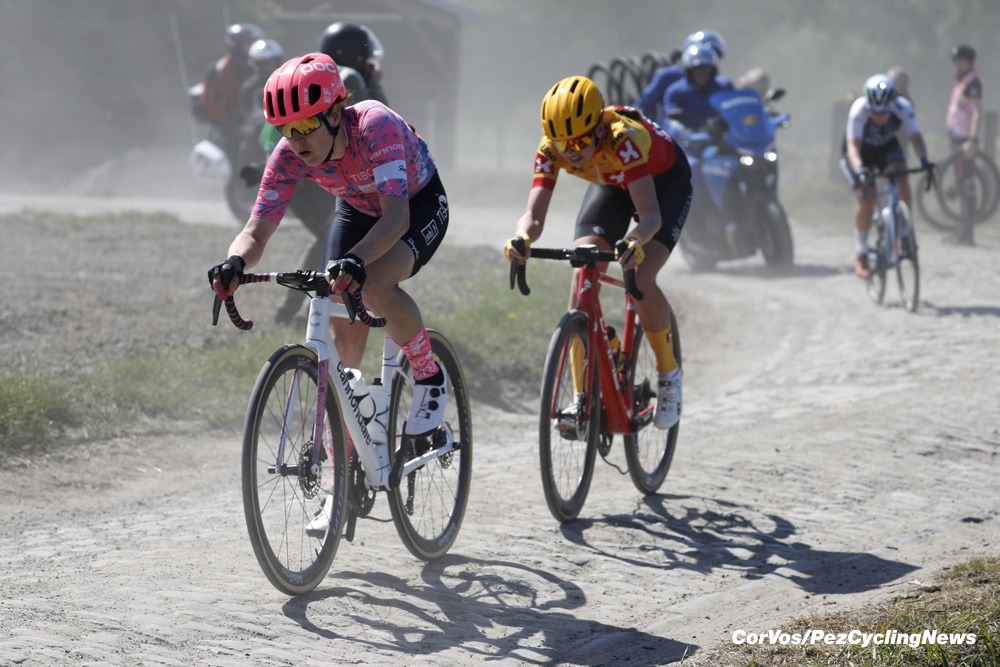 The German didn’t have much of a lead. The peloton, often led by Ellen van Dijk, was getting closer and eventually caught her. Van Dijk was just behind the pack at that time, because she had a puncture. Later in the race, this would also happen to Elisa Balsamo and the unfortunate Marta Cavalli. In her attempt to return to the group, Balsamo used the ‘sticky bottle’ for a bit too long and was disqualified. 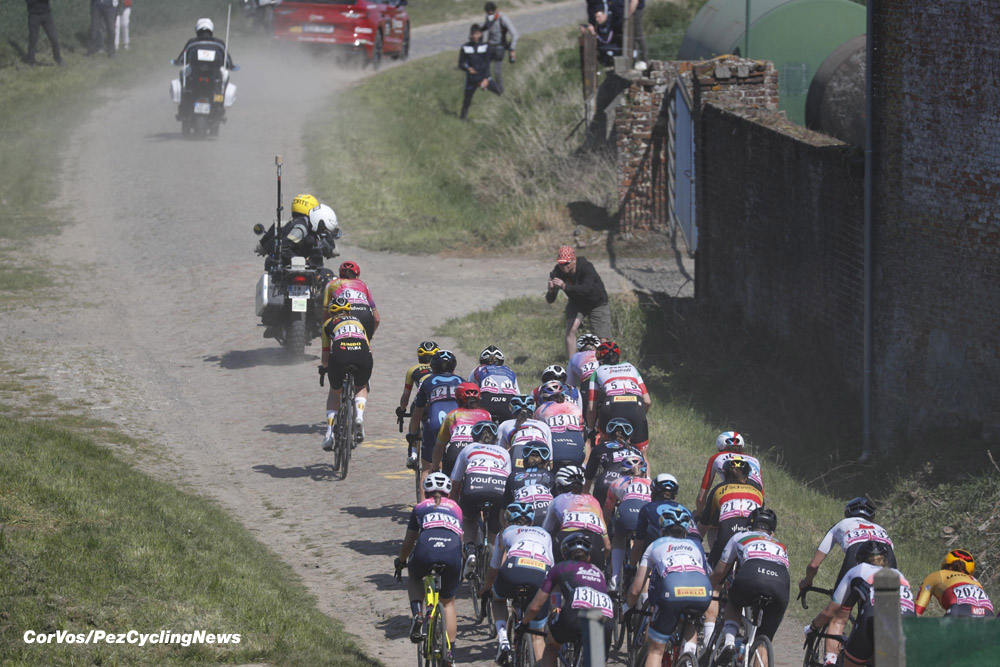 Cavalli and Van Dijk managed to get back. With 53 kilometres to go, Lotte Kopecky and Marta Bastianelli pushed on at Auchy-lez-Orchies – Bersée. Fortunately for Trek-Segafredo, Lucinda Brand was on hand, and managed to make the jump to the duo off the front. The three held out for a long time, but there was a large group behind. 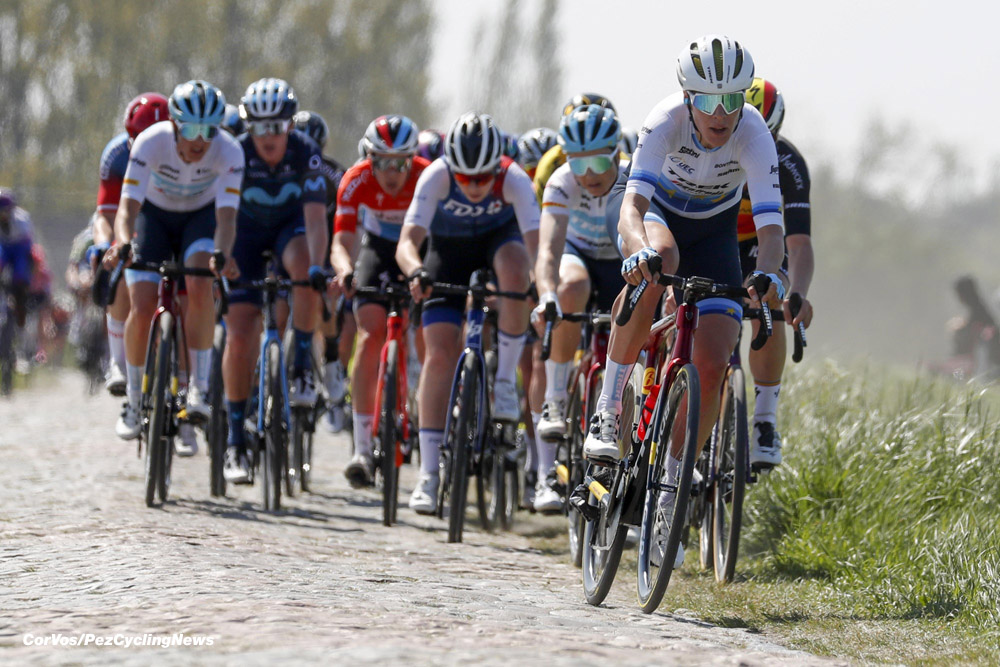 Trek-Segafredo’s Ellen Van Dijk did a lot of work 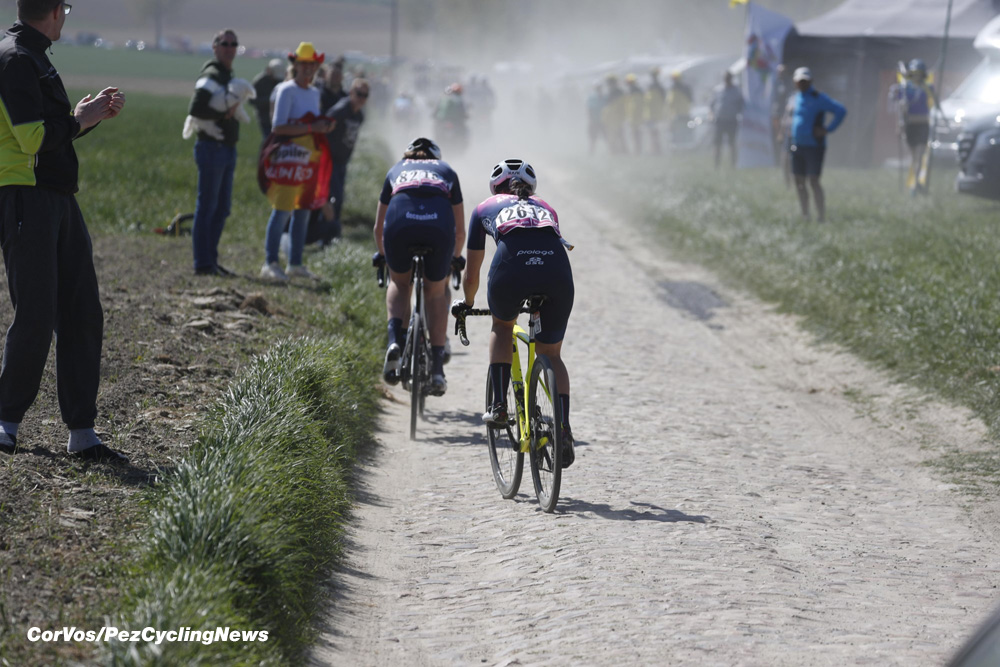 After another counter-attack from Alice Barnes (Canyon//SRAM), it all came together again. Elisa Longo Borghini (Trek-Segafredo) saw her chance at this point. The Italian champion took off on the Templeuve section. She soon had a lead of about 30 seconds on the peloton, where SD Worx led the chase. 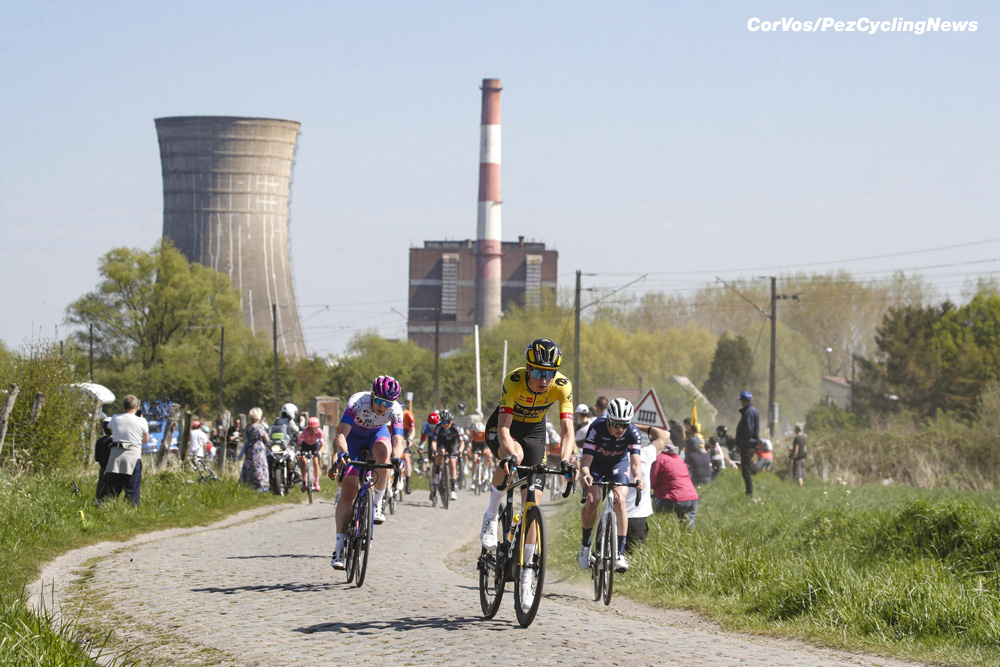 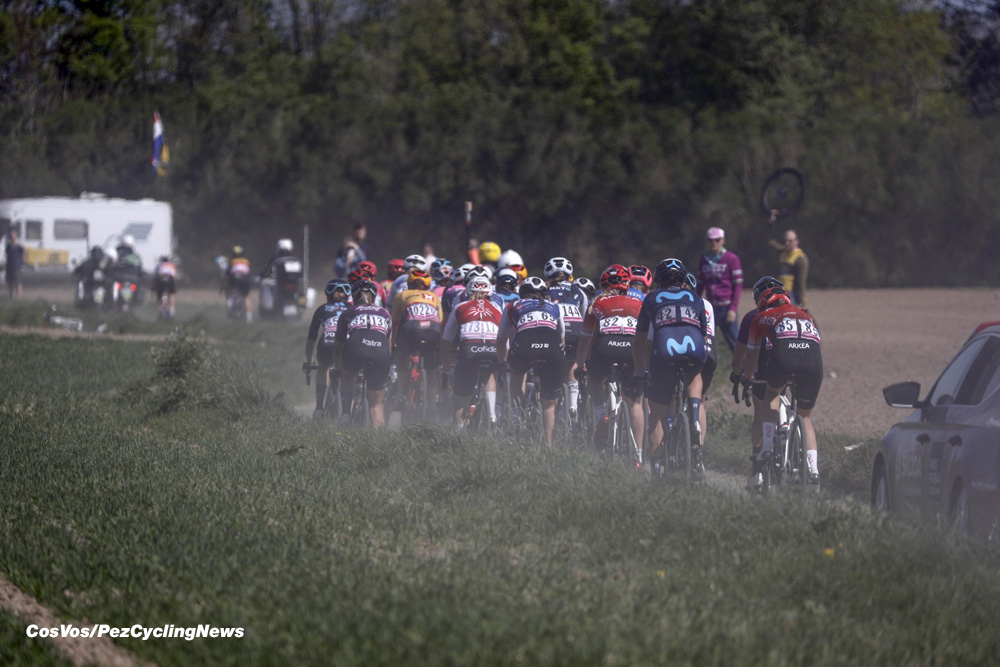 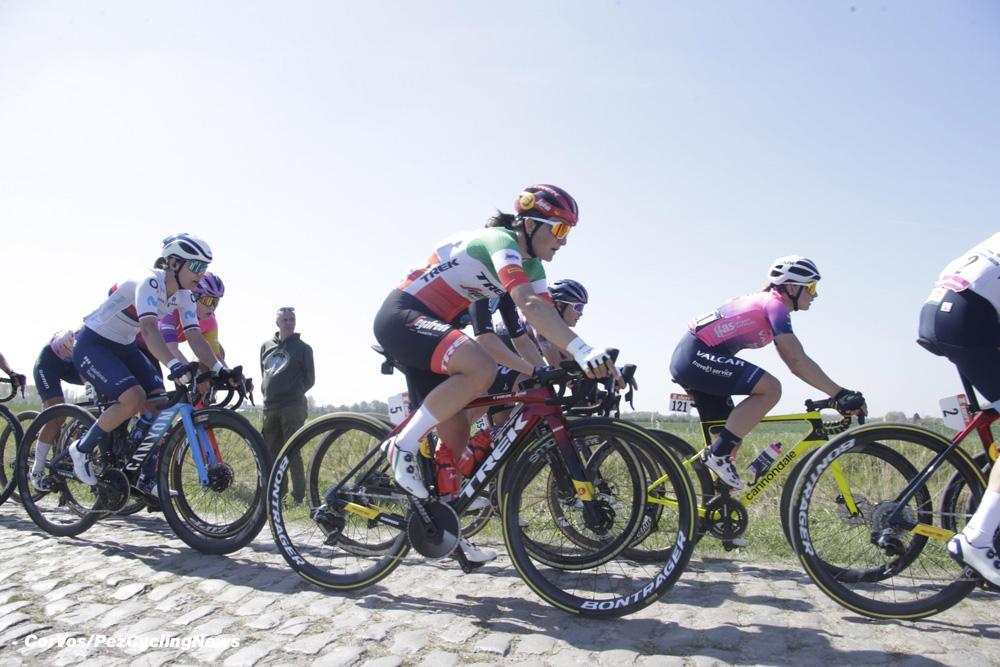 The nine got within 12 seconds of Longo Borghini, but the Italian stretched her lead. At Camphin-en-Pévèle, 20 kilometres from the finish, a regrouped peloton was eating into her lead. Borghini almost fell in a corner, but she held off a group with Kopecky, Cavalli, Van Dijk and Brand. 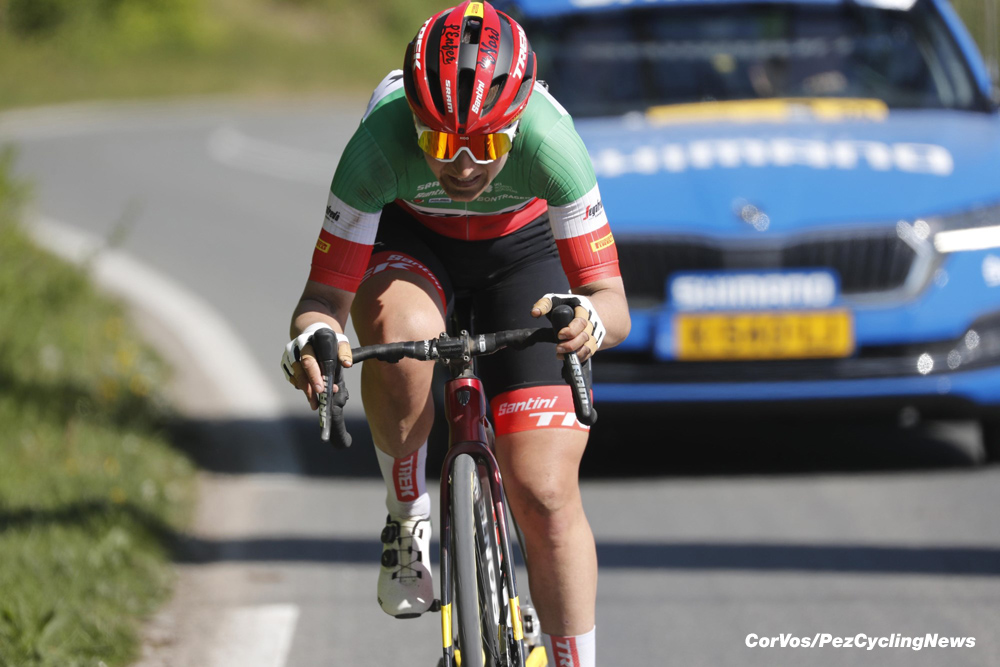 After a few other riders managed to join these four, it was again the same quartet that rode away on the Carrefour de l’Arbre. As there were two Trek-Segafredo riders in the chasing group, a chase didn’t really get going. Borghini had about 40 seconds by this point. When Elise Chabbey, Mackaij and Van den Broek-Blaak returned, the gap came down again. Van den Broek-Blaak in particular did a lot of work for Kopecky. 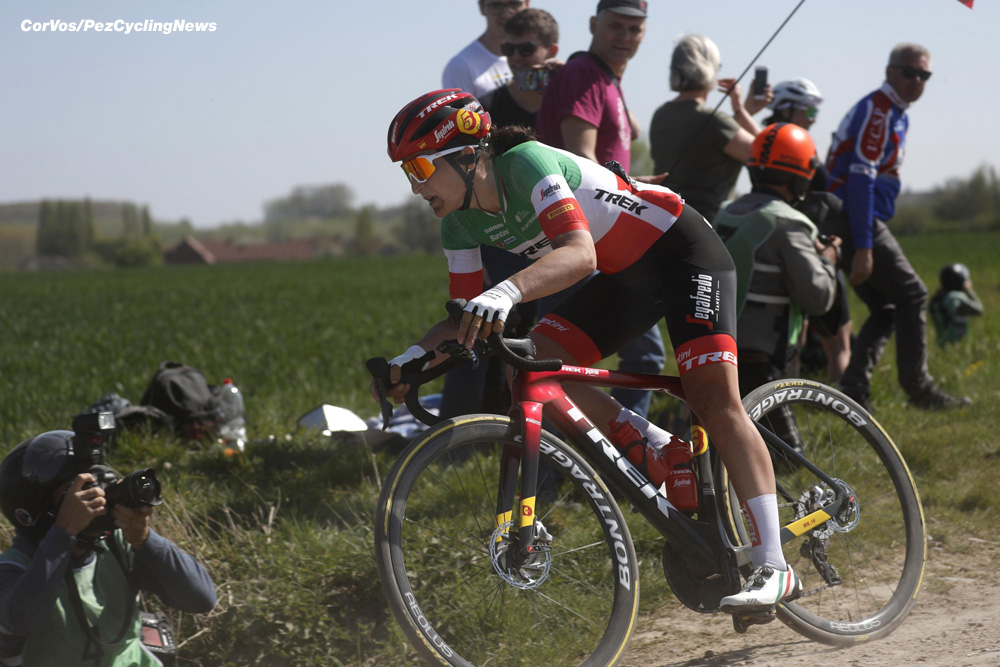 In the end it was not enough. Longo Borghini kept her lead and finished solo on the velodrome in Roubaix. Behind her it came down to a sprint for second place. Kopecky just edged out Brand on the line, so there were two Trek-Segafredo riders on the podium. 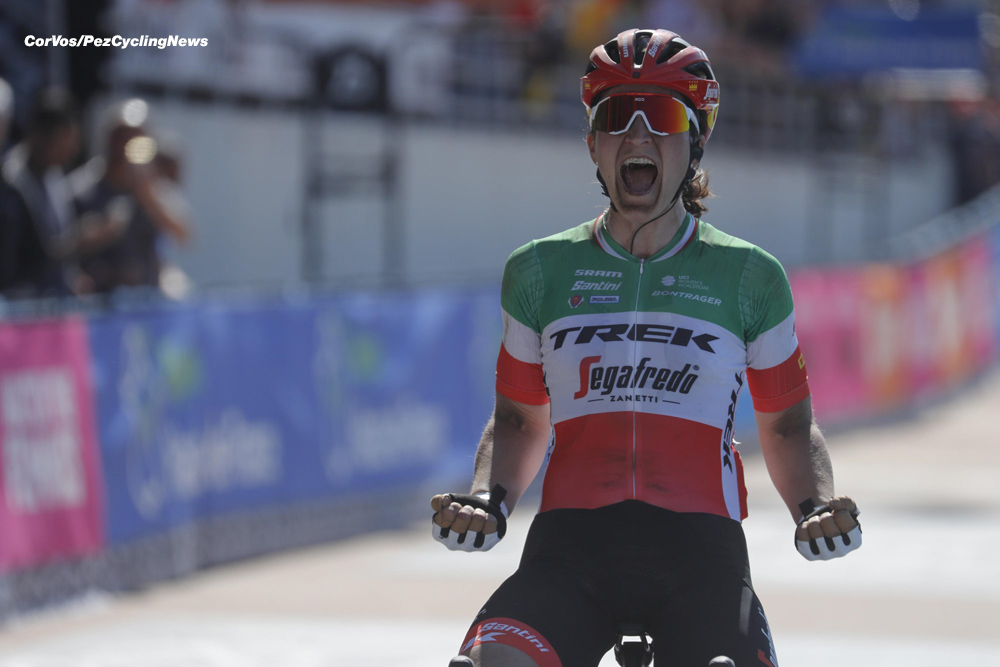 Two years in a row for Trek-Segafredo 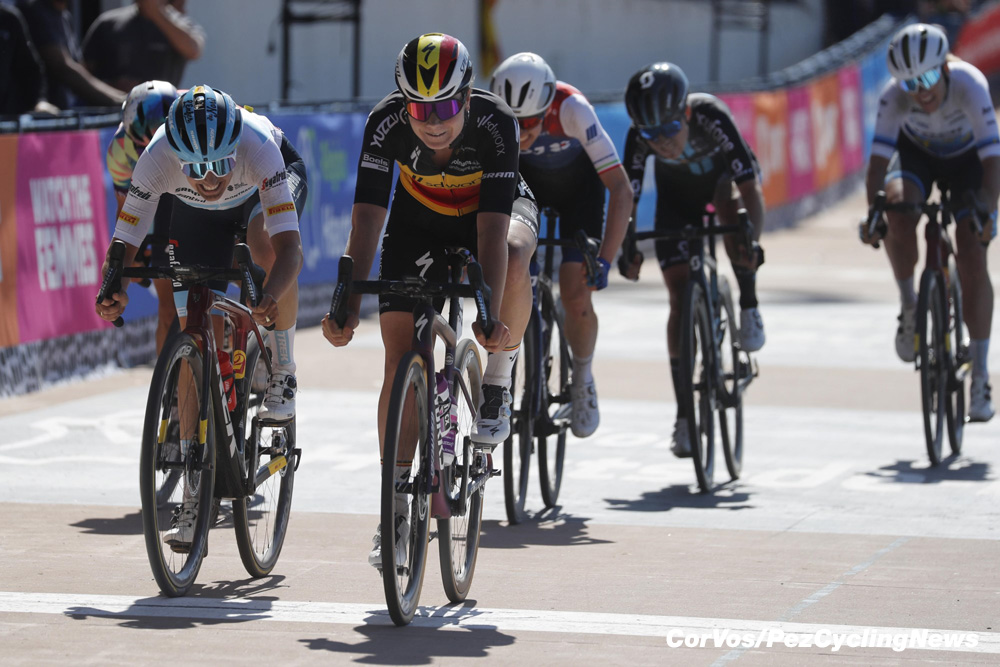 2022 Roubaix winner, Elisa Longo Borghini (Trek-Segafredo): “That was pure instinct to attack. I saw the break was caught and I thought it was a good move to be on the front and to put Lucinda in the best position to just follow me, and make SD Worx chase. Therefore I just went full on from there. The beginning of the season was not ideal, i had sinusitis and I couldn’t really breathe. I had to step back in order to move forward. I skipped Amstel and Brabantse Pijl because I had to take antibiotics. I wasn’t supposed to come here, so I had no pressure. But I did everything good this winter, and I was just sick for the entire Spring and I couldn’t perform the way I’m supposed to. As soon as I got healthy, I performed well. Surely the weather conditions were completely different but it wasn’t an easy race. It was lots of dust on the road and on the cobbles. I tried to go alone, because then I can choose my lines. It was different but not any safer. It’s Roubaix, that’s it! Entering the velodrome is an amazing feeling. It’s like going through the Dantesque hell, and then all of a sudden you’re in paradise, and you can really enjoy it. I still don’t really believe in it.” 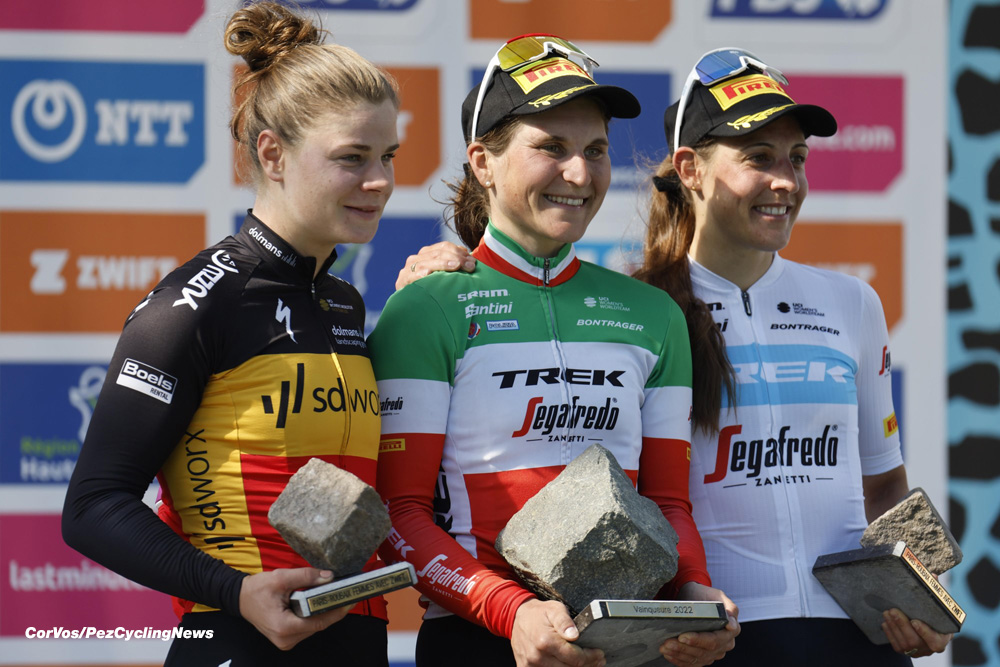 Cobbles for everyone on the podium

# Catch up with all the Roubaix news in EUROTRASH Monday. #

PEZ Goes to the Movies: The Least Expected Day, Season 2