Race Report: Matteo Trentin took the fastest road race in history as he won the 2015 Paris-Tours in an average speed of 49.6km/h. But, the Italian had to fight for his fourth win of the season as he was in strong company as he hit the finalé of this old French Classic.

The Sprinter’s Classic was poorly named today as a 31 man breakaway took advantage of cross tailwind for the duration of the race to stay away from the chasing peloton. They stayed together until the final 10km but as soon as the race hit the climbs of the Beau Soleil and l’Epan it all blew apart with Greg Van Avermaet, Tosh Van der Sande and Matteo Trentin going clear. Van Avermaet suffered horrific luck as he ended up with a puncture as they passed under the flamme rouge. It was advantage Van der Sande as Trentin led out the sprint with 300m to go but the Italian is on incredible form this season and he easily held off the young Belgian to take another victory. 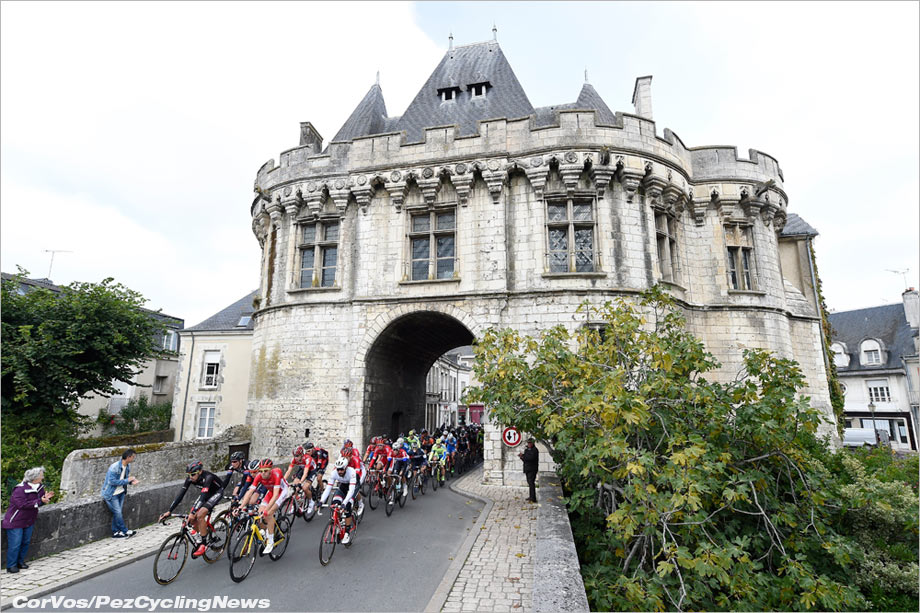 Route
The Sprinter’s Classic now has the feeling of an elderly French actress on the Cote d’Azur. Her former beauty has faded but, occasionally, in the right light you can still see what made her famous in the past.

The race starts in Chartres, well known for its Gothic cathedral and finishes 231km later in Tours. It’s almost pan flat, as befitting a race known as the Sprinter’s Classic. There is intrigue inside the final 10km however with the small climbs of Cote de Beau Soleil and the Cote de l’Epan. Both have proven to be launchpads for race winning moves before but the flat parcours and wide finishing straight suits the sprinters.

At the start there was a definite feeling of Autumn as the race set out under grey skies with a temperature of just 8 celsius. 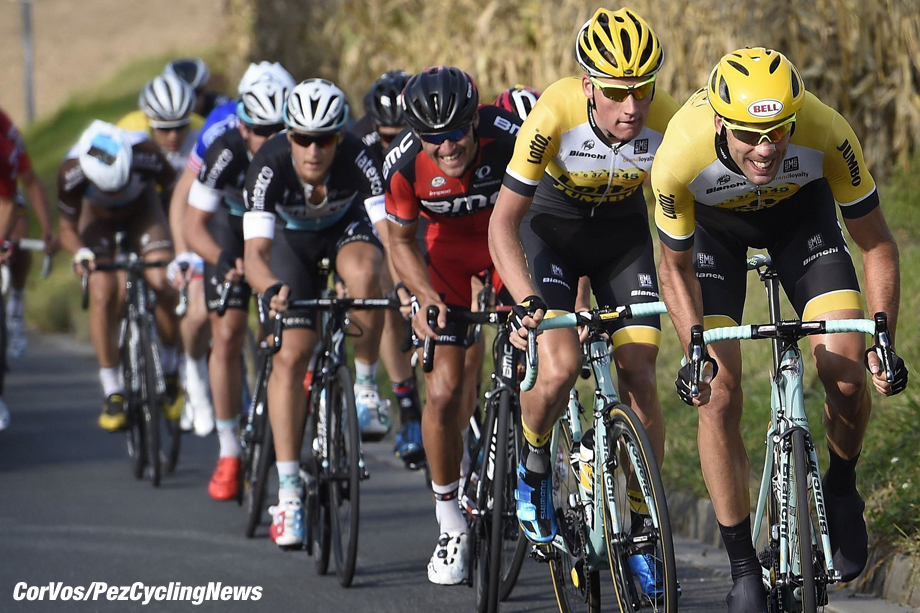 The peloton were reacting however and in the second hour of racing, which averaged 50.9 km/h, the break was trimmed by 5 as World U23 champion Ladanois, Bohli, Van Melsen, Siskevicius and Dougall all fell victim to the pace and fell away. 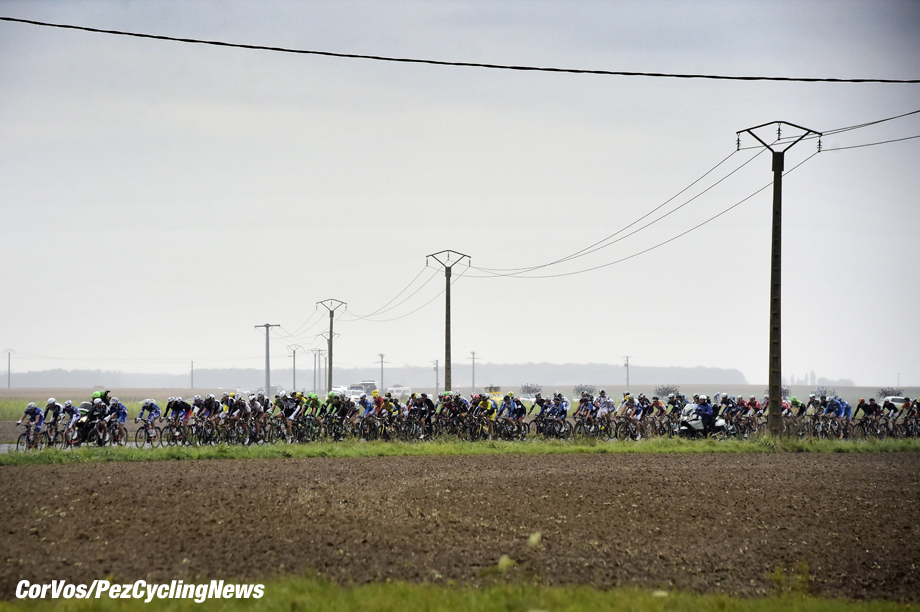 Speed Kills
With just 58km left to ride, the riders had clearly decided that they wanted to get this over and done with quickly, the average speed was a phenomenal 51 km/h. It was now confirmed that the peloton had all sat up and the victory would come from the leading 49 riders. There was still plenty of work for the Wallays group to do as they lay 2:45 behind with 38km left to ride.

The favorites for the race had to be Lotto Soudal who had four riders in the lead break but it was Julien Duval from the French Army team who made the first bid for glory with 24km left. The pace was savage and Duval was brought back inside 20km. Benoit Jarrier was the next rider to go, another Frenchman, but his attack wasn’t explosive and he was never given more than 20 meters. With Lotto Soudal, LottoNL-Jumbo and Etixx having massive firepower in the leading group the smaller teams knew that the only chance of an upset came from a long attack, the next riders to try this method were Arnaud Gerrard and Combaud who built up a 14 second lead heading into the final 13km. 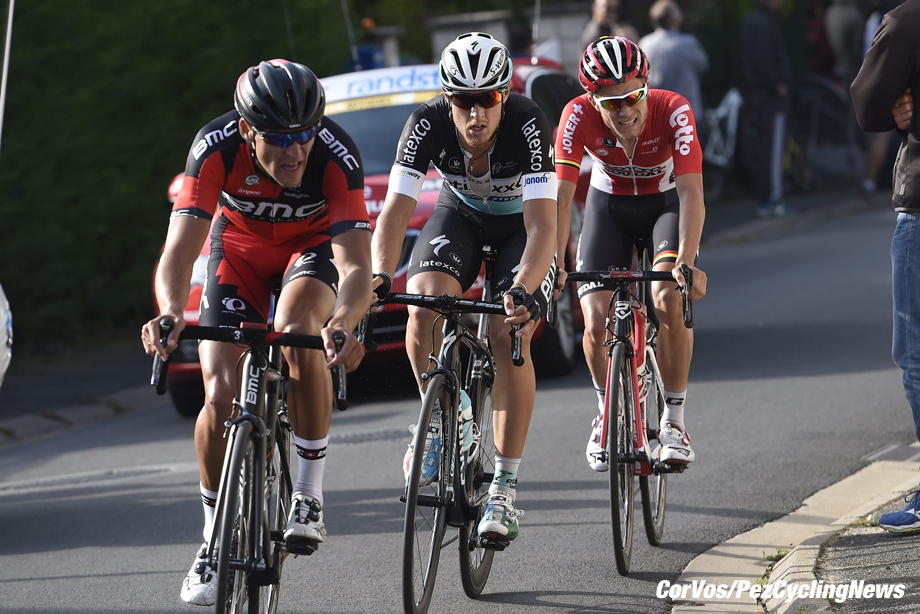 The Final Climbs
As they hit the foot of the Cote de Beau Soleil it was all back together for the front group. It was too much for many of the leaders and a quartet of Trentin, Van Avermaet, Brutt and Van Der Sande set off in pursuit of glory. Trentin looked incredibly powerful and his pace was too much for Brutt. With 7km left to ride it looked likely that the winner would come from this trio.

Van Der Sande knew that he was in refined sprint company and he was keen to stay away from the front. Trentin and Van Avermaet are wily professionals though and they forced the young Belgian to the front with 3km left to ride. Gougeard was doing all the chasing behind but he was unable to close to gap.

There was drama in the front as Van Avermaet seemed to pick up a mechanical as they crossed inside 1km to go. He stayed with the leading duo but clearly there was something wrong as he fell away when the sprint went.

Trentin was pushed to the front with the whole of the finishing straight to ride. It was advantage Van der Sande as the Italian was forced to open his sprint with 300m to go. Trentin was just too strong though and he beat the young Belgian by half a bike length to take a fantastic Paris-Tours victory. 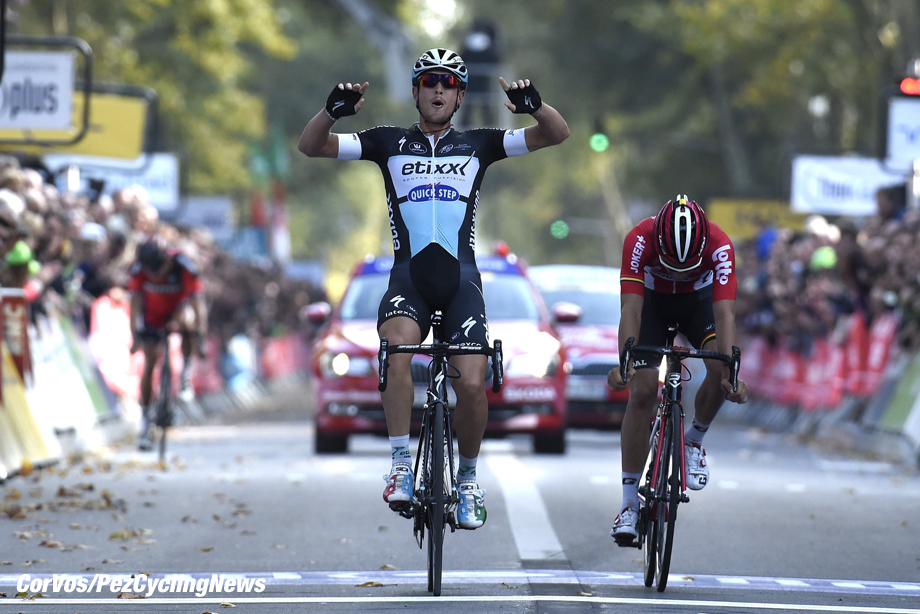