PEZ Down Under: The Race Hits The Road!

After his leisurely start to the first WorldTour race of 2015, David Pearce is up and running and chasing the Santos Tour Down Under. David is hanging with the Drapac team and is using his backstage pass to bring you all the behind the scenes action. He’s also loving the weather.

Word’s and Photo’s by David Pearce.

My body is a little uncertain what has hit it. At this time of year I have settled into the Northern European winter, excess weight has well and truly manifest itself and rides where my feet have frozen solid after 20km have become endurance events. Now I find the sun beating down relentlessly, the days longer and the rides stunning. I am 10,100 miles away in Australia to photograph the first of the World Tour races of 2015 – the Santos Tour Down Under.

Stage One was 132km taking the riders from Tanunda in the wine making region of the Barossa Valley to Campbelltown passing through the scenes of devastation that the recent bush fires caused. I am working with the Drapac Team all this week and will be posting a daily diary for you. 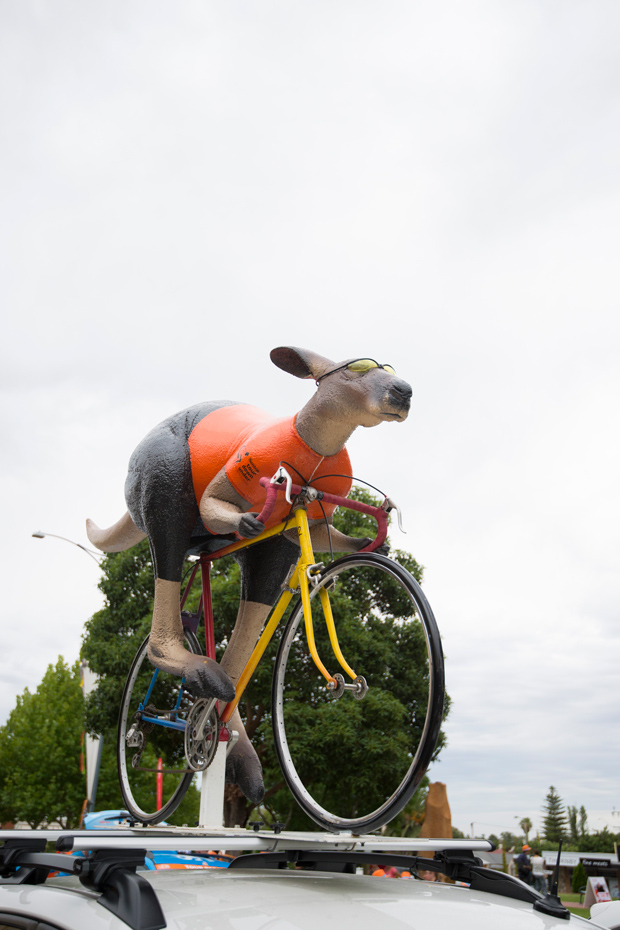 The drive to Tanunda started early at 07:30 in preparation for the 10:30 start. Arriving 90 minutes early gave me the opportunity to have a look around and take in the atmosphere. The town had immersed itself in the race resulting in a real festival feel. They really had embraced it. I was hungry after an early start so some German sausages cooked on the street by the local bakery went down a treat with the Sauerkraut and mustard. I could get used to that from breakfast but know my cycling may suffer! 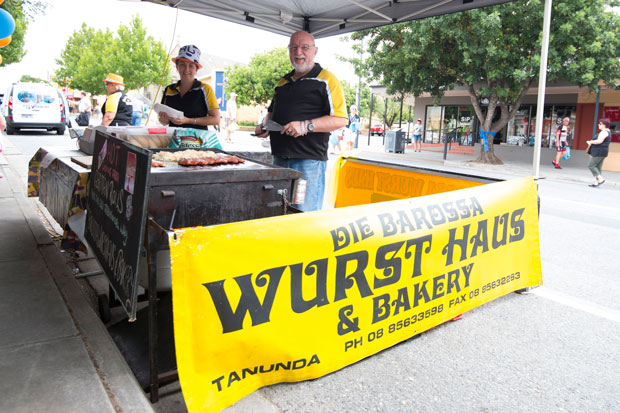 The sausages where fantastic! 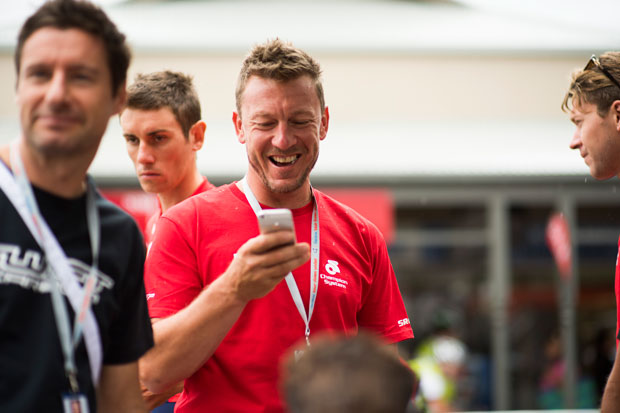 The Drapac team preparing for the race 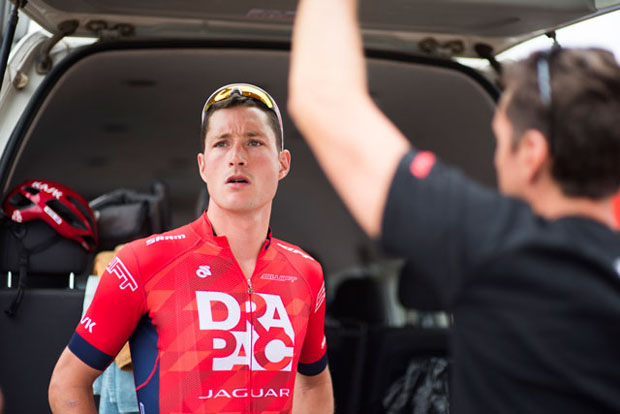 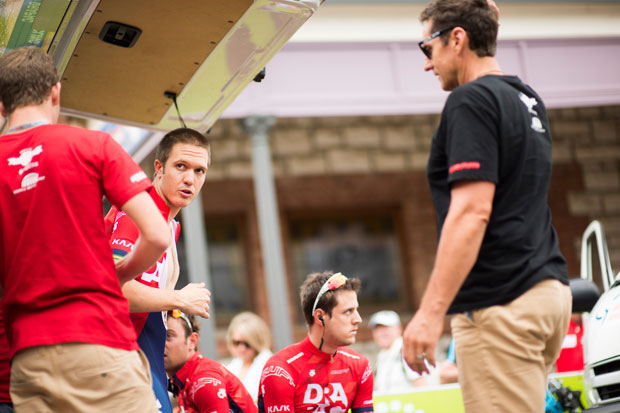 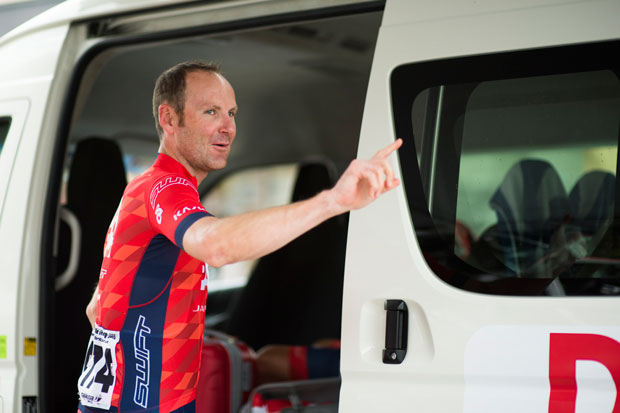 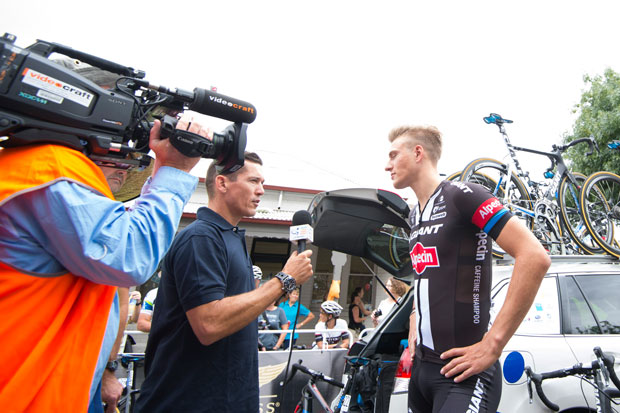 Marcel Kittel being interviewed prior to the start 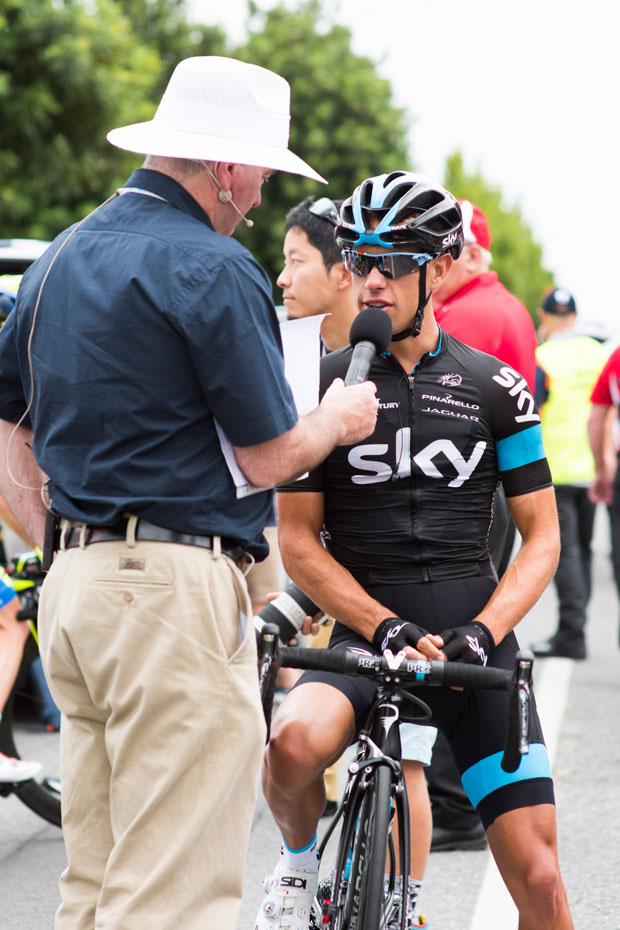 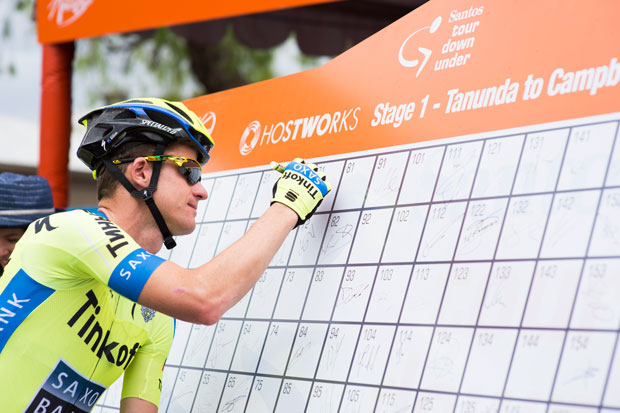 All the riders have to sign on before each stage start 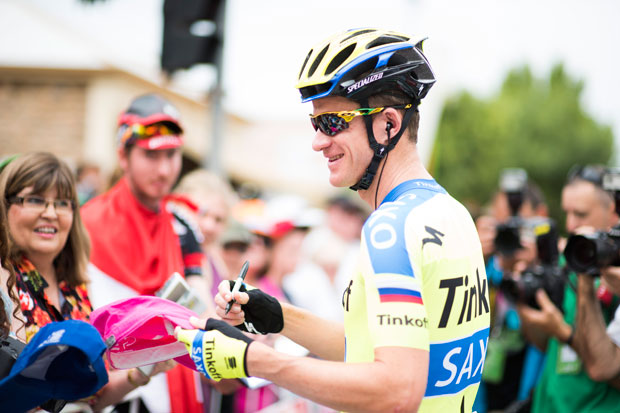 We left before the race rolled out to facilitate finding a suitable spot to shoot from. Once a location had been scouted it was a case of finding the best angles and waiting for the 4 man breakaway consisting of Jack Bobridge, Luke Durbridge, Lieuwe Westra and Maxim Belkov to reach us. We timed the gap and they had built a lead of 2 minutes after 40 mins and looked strong. I wondered if they would manage to maintain it to the line… 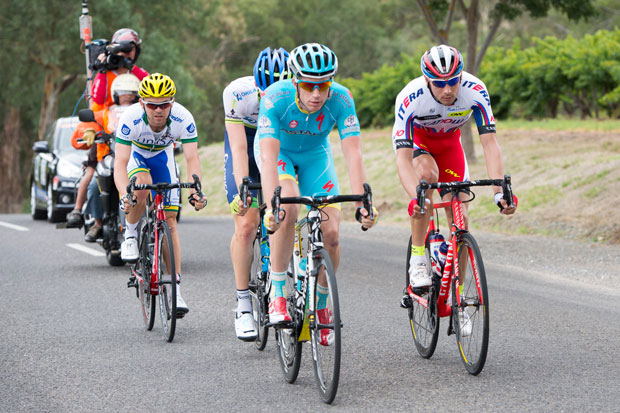 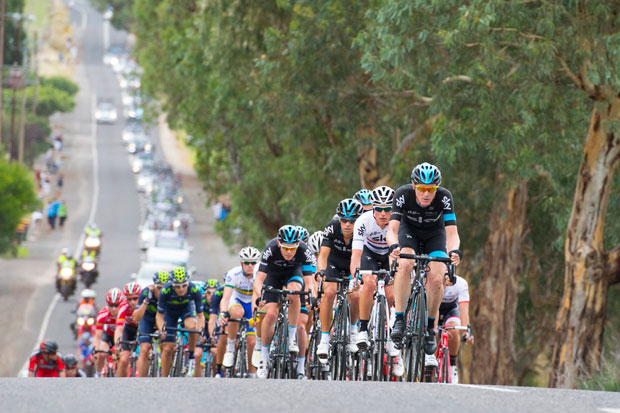 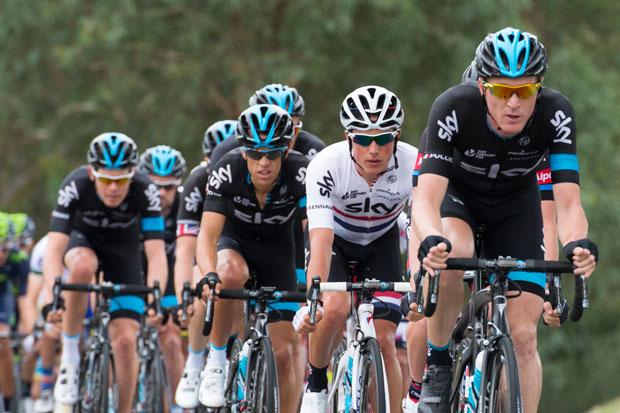 From here we swiftly moved on to be in the heart of the wine making region stopping outside the Hemera Winery. Being a social chap I wondered over for a chat with a group of people enjoying drinks and a BBQ outside in the grounds waiting for the race to pass through. It turns out that the guy working the BBQ was Jack Bobridge’s cousin. Jack is a familiar name being a track world record holder, Olympic silver medallist and 5 times TDU racer. It was fantastic to see him within the breakaway giving his family good cause to be cheering. They went wild as you can imagine when he came speeding past in the break! 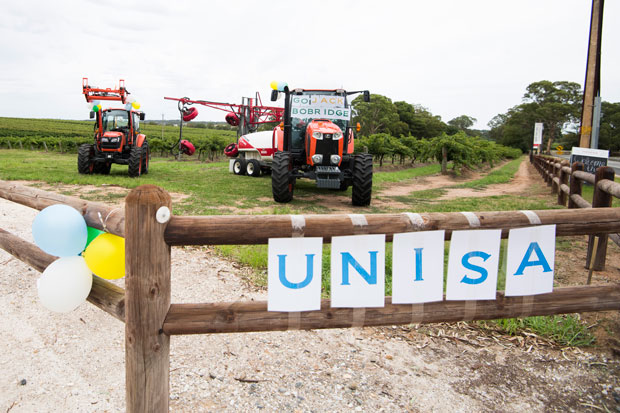 The family had decorated their tractor in support of Jack 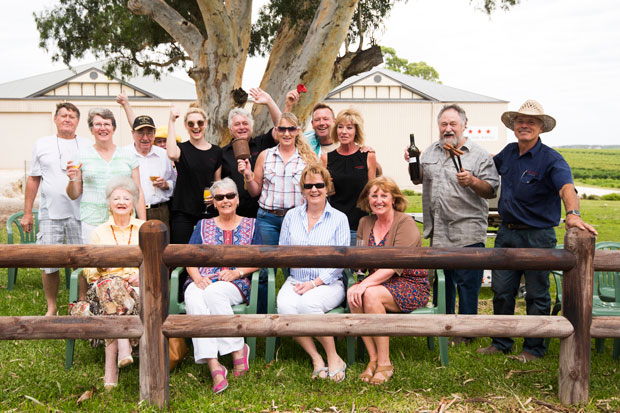 The winery team out in celebration of the race with wine, sausages and great humor 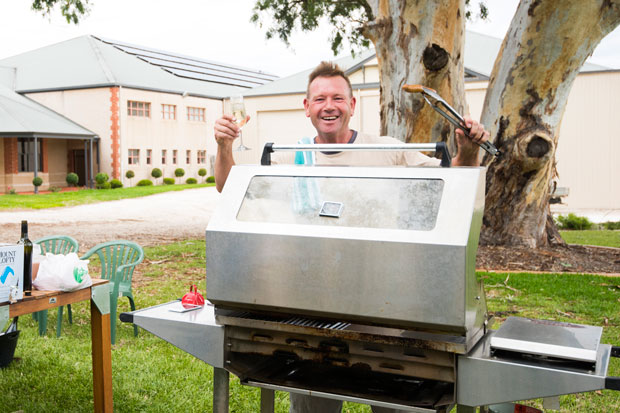 Like virtually all of the Australians I have met the hospitality they offered was generous and welcome, giving me a very tasty hot dog made with a gourmet sausage and their own homemade tomato sauce. This is a consistent trait of the Aussies (and Italians) who seem to love sharing and welcoming guests into their country. I just love it here and embrace the culture. 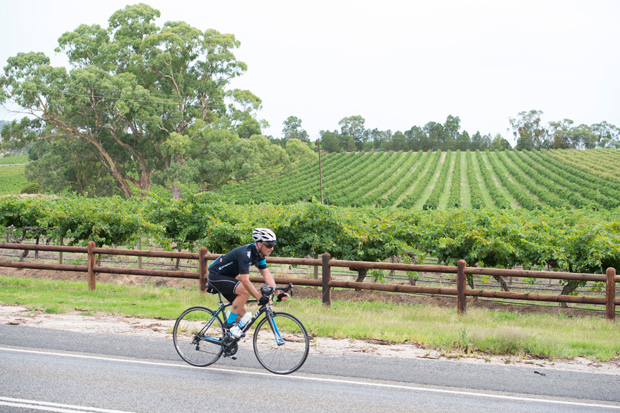 The race paces through wine country with its beautiful vineyards 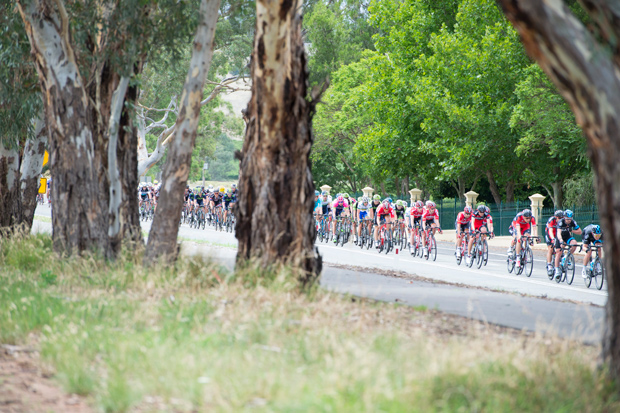 As mentioned above severe bush fires attacked this area just a couple of weeks ago so we were fortunate to even be here. It was something that I wanted to show but picking the right location was always going to be hard. In the end we chose a spot which was not ideal but was pretty much our only choice. The devastation caused was tremendous. 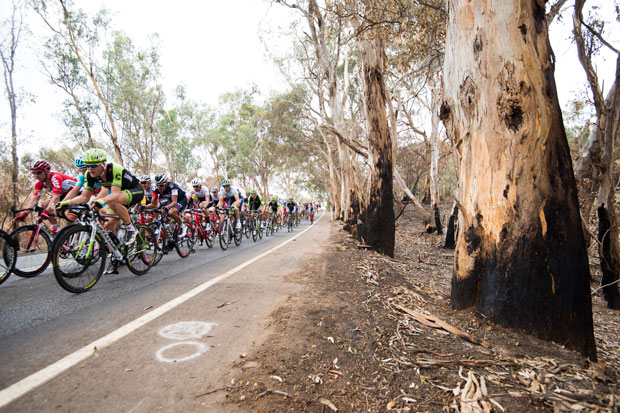 The destruction caused by the bush fires

The bunch had bought the breakaway back to 20 seconds with Marcel Kittel’s Giant-Alpecin team trying their hardest to close it down. Unfortunately for them Bobridge and Durbridge are Aussie lads (Bobridge grew up right here) and know these roads exceptionally well. They knew when to push hard and when to ease off passing this information onto the Europeans. The tactic worked as the roads that meander through the gorge within the Adelaide Hills made it hard to organize the chase. Kittel’s team manager Simon Geschke stated that he thought Astana had blocked a little making the catch hard. 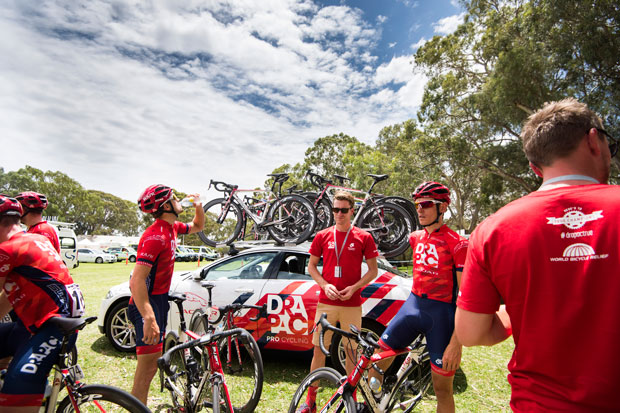 Riders from Drapac after the race 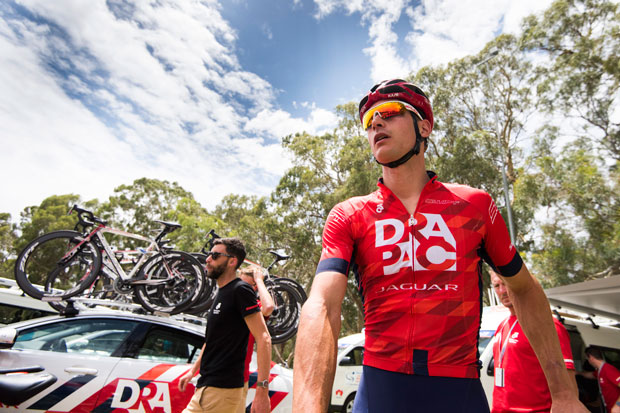 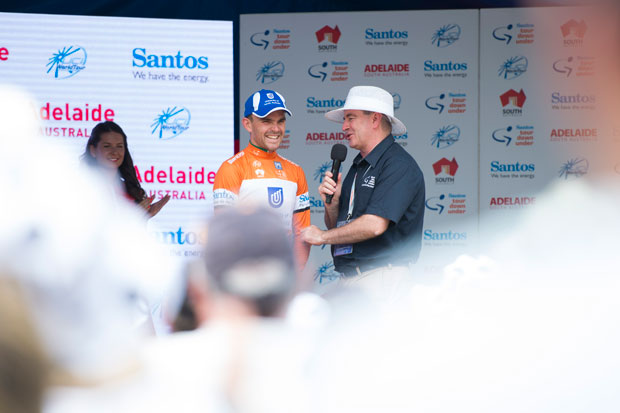 Jack Bobridge being interviewed in the Ochre jersey

Reaching the final few km Bobridge recalled the lesson he had learnt from the National Championships where he went early and held his nerve whilst the peleton descended upon him to take the win. It was his first stage win here and the first time in the Ochre Jersey. He later said that he was speechless.

Speaking with the Drapac team after the race Wouter Wippert explained they had some unfortunate luck with a few mechanicals (including Martin Kohler with just 12km to go) “We tried what we could but we only had 2 guys left at the end and then the 4 off the front. Try again tomorrow.”

Tom Southam, the new DS for 2015 said “It was an interesting day. A little frustrating to be honest, because we were hoping that move would be brought back by some of the bigger teams who had an interest in the sprint, or the GC. But the break played it well and we knew in advance that it was so hard to chase down the Gorge road, but that the onus wasn’t on us to ride, when there were still teams like Giant, Ettix and IAM there with fast guys.”

Tomorrows stage starts in the upmarket town of Unley traveling 150km to Stirling.