PEZ Down Under: Porte Pushes Hard!

A desperate attack by pre-race favorite Richie Porte saw him steal the queen stage but he couldn’t quite reach the leader’s jersey falling two seconds short as Rohan Dennis hung on in fine style. The sentimental favorite Cadel Evans was also well in attendance as was a simply huge Aussie crowd with our photographer David Pearce right in amongst them all to capture these great images of all the action.

Words and photos by David Pearce

It was one of those mornings today, one that I am sure has happened to all of us at some stage. Cycling into work from my hotel which in this case was to photograph the Santos Tour Down Under I spotted a group of 3 riders ahead. Even though I am 8kgs heavier than usual due to a lack of discipline over Christmas and carrying my camera gear in a back pack weighing over 12kg, I decided to catch them up. I made a half hearted effort but failed to make much progress and made a mental note that they must be good club cyclists. At a set of traffic lights having finally caught up I discovered that they were in their 70’s… I was not mortified by this but inspired. Very inspirational.

Today was a very long day extended by heavy traffic coming back to base so instead of a usual wrap up of my day today I’ve instead used quotes from the official TDU press release of the day’s action combined with my images and captions to tell you about another magic day at the TDU. 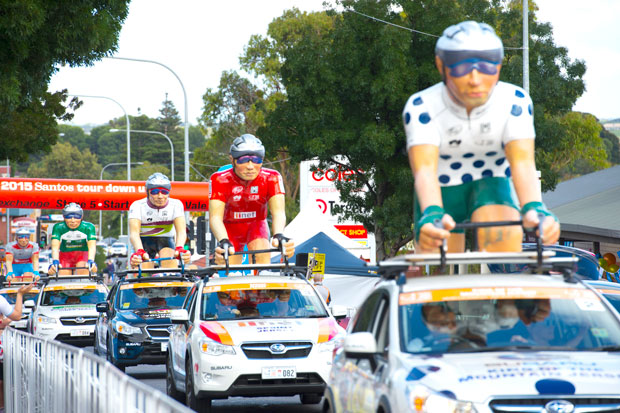 The race convoy has been very well thought out this year with all cars embellished by these models. 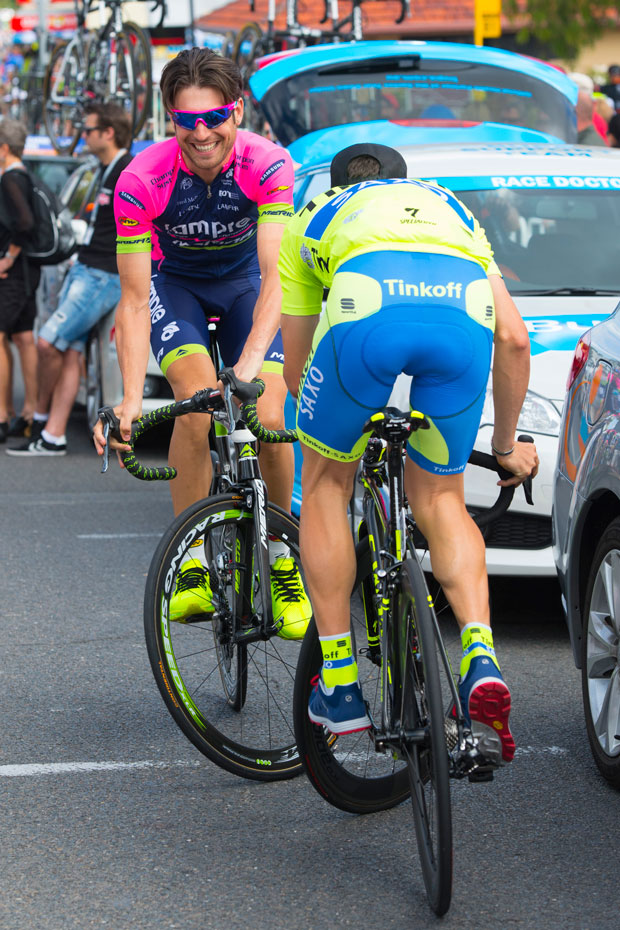 A Lampre and Tinkoff rider muck about after sign on pretending to ride into one another. 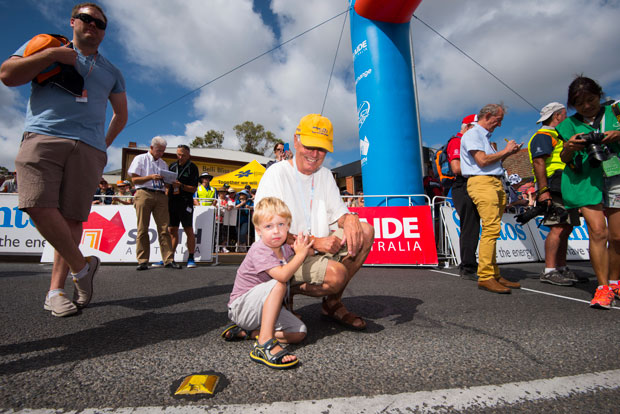 This little fella had accreditation to be on the course before the race and just loved seeing all the riders. 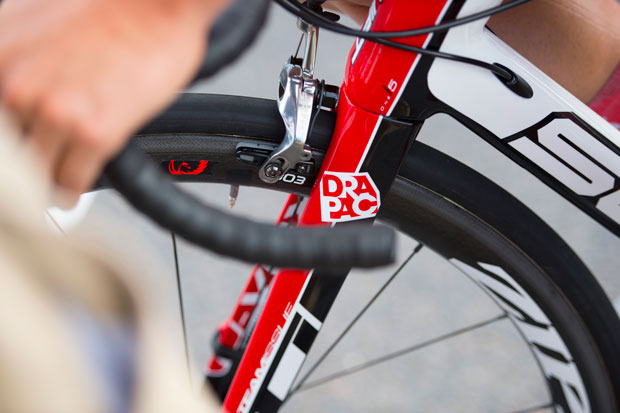 A desperate defence by South Australian Rohan Dennis has seen him cling to the Santos Tour Down Under lead despite a strong challenge by Tasmanian Richie Porte.

Porte (Team SKY) ignited the afterburners on the final ascent of Old Willunga Hill in a bid to steal the race lead. But while Porte won the stage, Dennis dug deep to keep the deficit to nine seconds across the line and that keeps him in the Santos Ochre Leader’s Jersey, albeit by a mere two second margin.

“Nobody could talk, there were no words of wisdom, it was just stay at the front, stay out of the wind and just follow,” said Dennis of the race plan for the day.” Richie went, in hindsight, probably a bit too late because really he had better legs than me today so I gotta thank him but also my team was absolutely awesome, absolutely awesome.”

Porte is unlikely to want thanks from Dennis and was disappointed to some so close yet miss out on taking the race lead.

“But I am very happy to win the stage,” said Porte. “It’s a great way to start the year and my team has been fantastic.

“Full credit to Rohan,” he said graciously. “I mean I gave it to him as hard as I could but it just wasn’t quite to be.

“It can still happen that I get it tomorrow but I was kind of hoping to finish it off today. 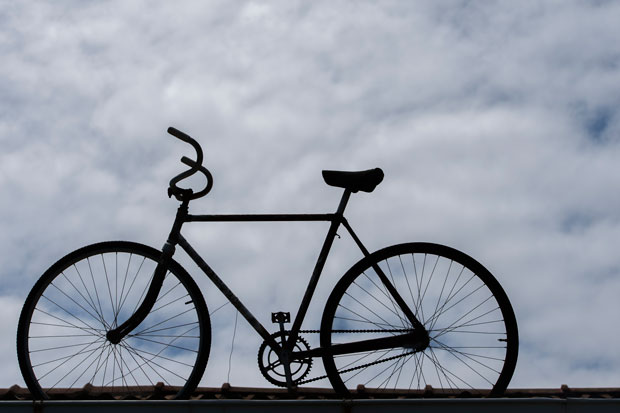 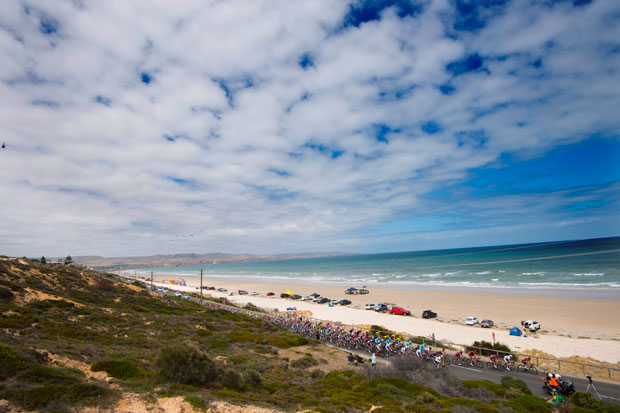 I got a great vantage point today to capture the riders coming through Port Aldinga. 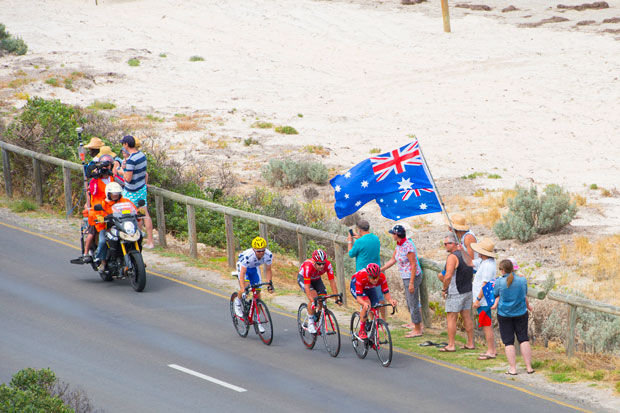 The Aussies are a very patriotic bunch. 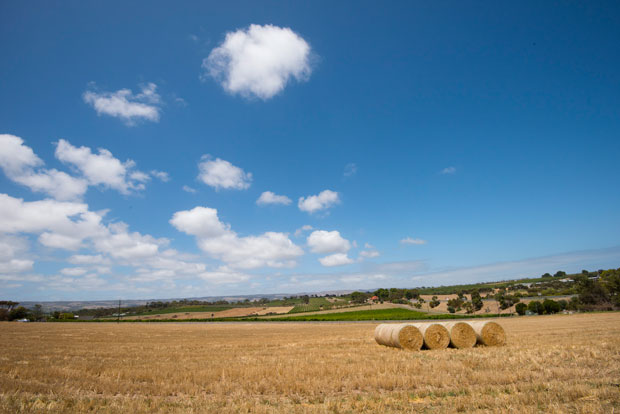 I waited for 60 minutes in this location for the riders to come through.

Porte has managed to split the BMC Racing quinella with Cadel Evans now 20 seconds off the lead. Evans was fourth on today’s stage just behind Spaniard Ruben Fernandez (Movistar) with both coming home 16 seconds after Porte. 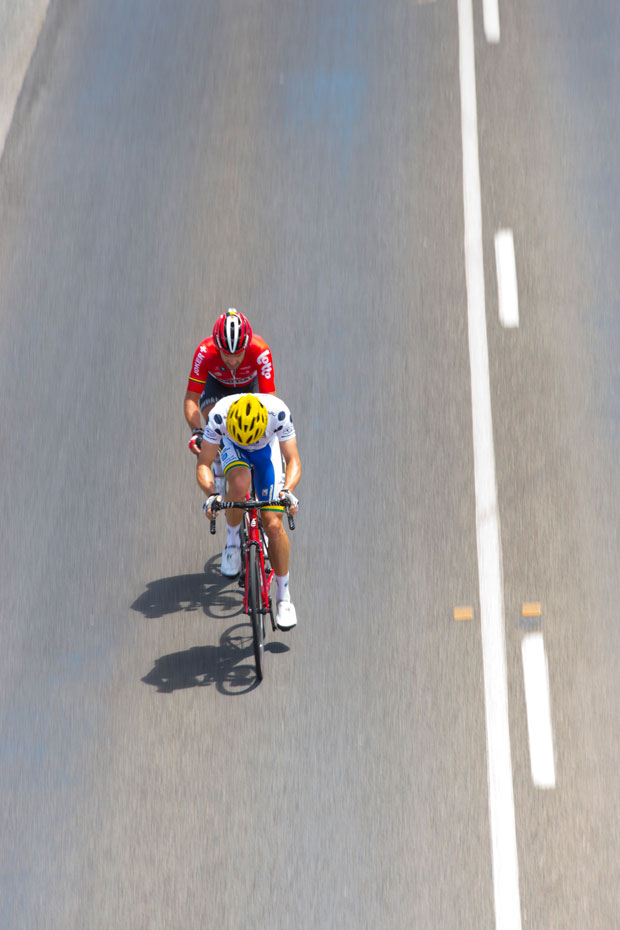 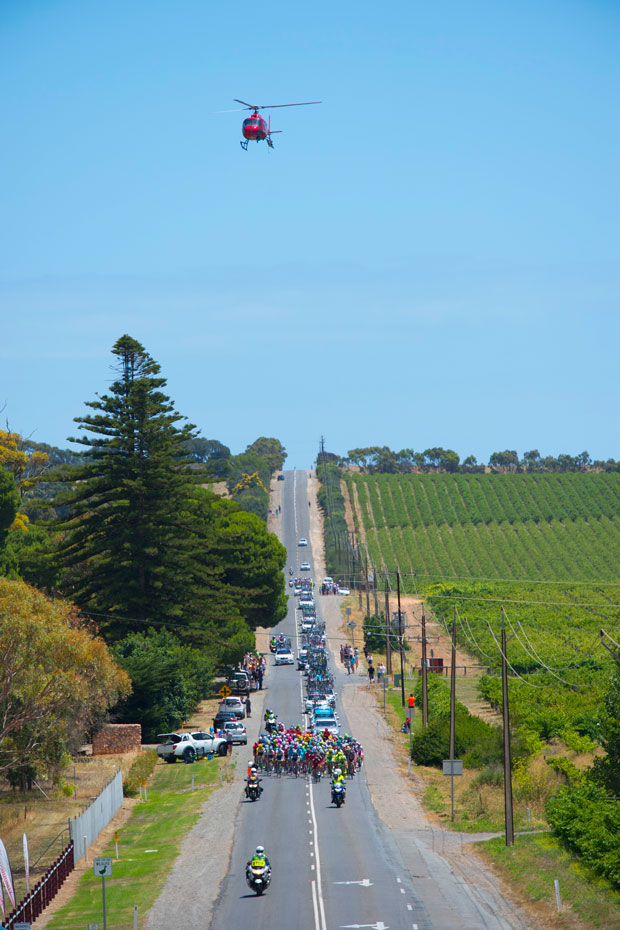 The ever present helicopters play a vital role in relaying the rave to the TV audience. 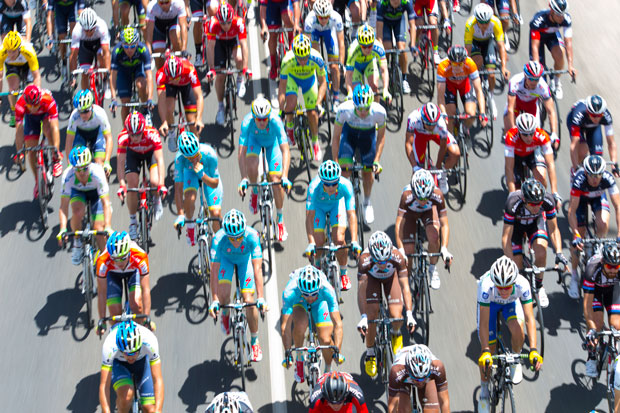 I love this abstract image with an Astana riders only in focus.

“We were attentive, because anything can happen, as we saw and we didn’t miss anything all day,” said Evans who is riding in the last World Tour event before calling it quits on his 20 year professional cycling career. “But maybe that left me a little more fatigued in the finish, maybe that cost me.

“If I am behind, then they’re going to ride like crazy up front,” he explained. “We had to be there, we adapted accordingly, and we were there.” 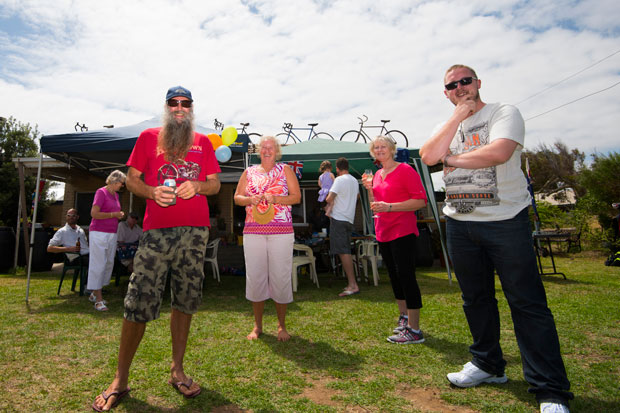 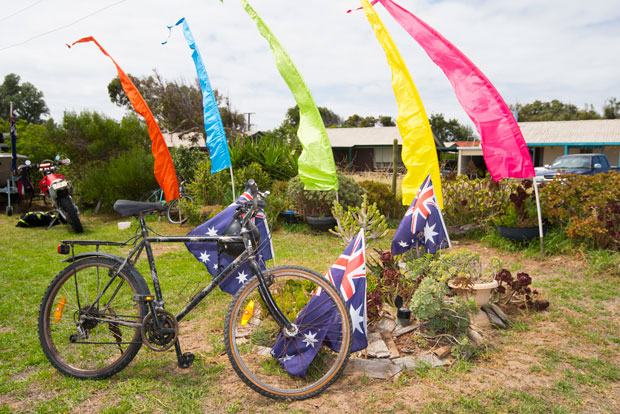 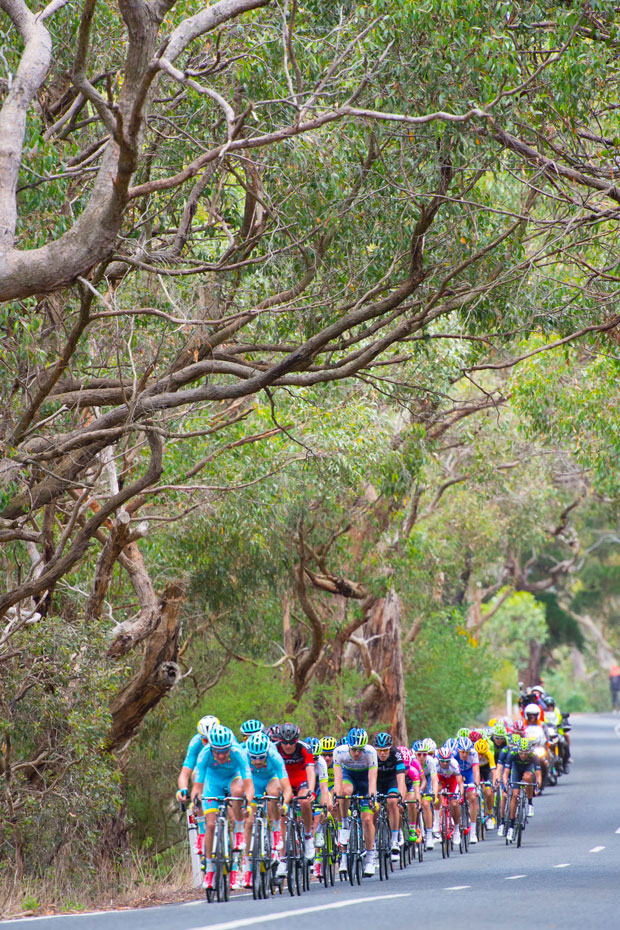 Taken on the last lap with the race at full pelt. From here the course is flat until a steep descent before taking the riders up Willunga Hill for the 2nd and last time. 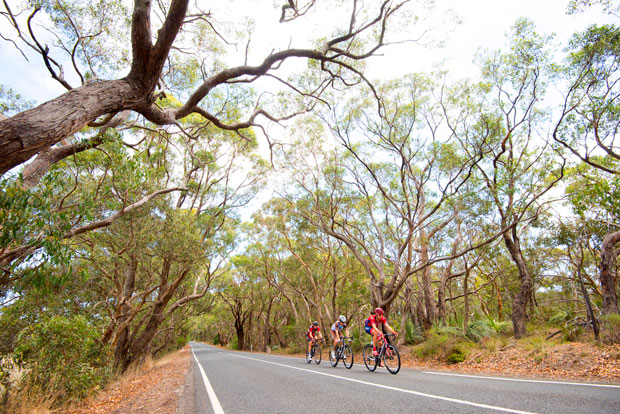 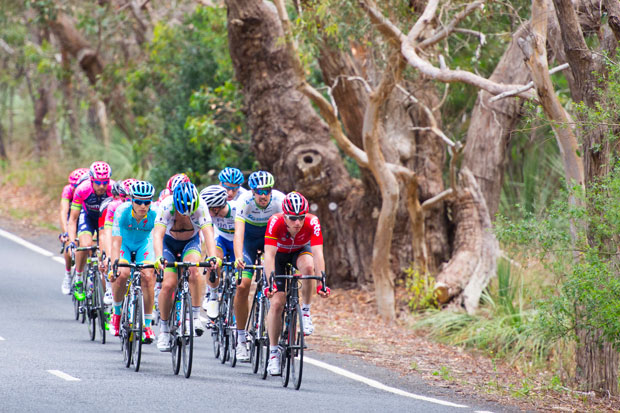 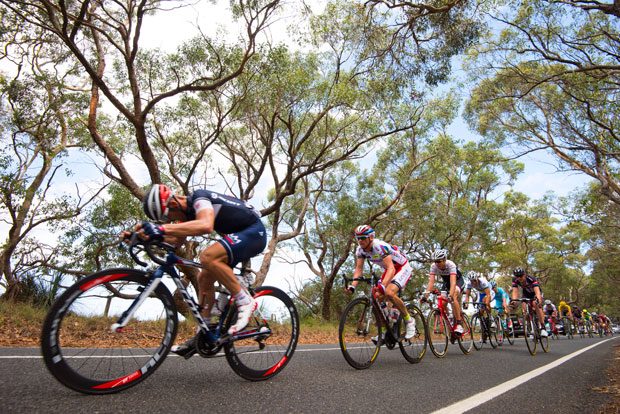 Whilst disappointed to drop down one placing he was pleased that Dennis delivered for the team.

“I lacked a little bit in the last 300 metres and it was close for Rohan in the end,” said Evans. “I’m glad I put him in position when I did, because he was riding a little bit better than me today.”

Today’s result was a similar story to 2014 when Porte won the stage but couldn‘t reel in eventual Tour winner Simon Gerrans (Orica-GreenEDGE).

But Team SKY director Kurt-Asle Arvesen was concentrating on the positive outcome.

“We are absolutely happy with how the team rode today,” said Arveson. “Everyone was supporting Richie and we were committed for the entire stage.

“We believed from the start we could win this race,” he said. “Maybe now we will be second, but we are very happy.

“What was important today is that when Richie attacked, he attacked, he didn’t stop and look around, but that he was committed to the attack all the way to the line.” 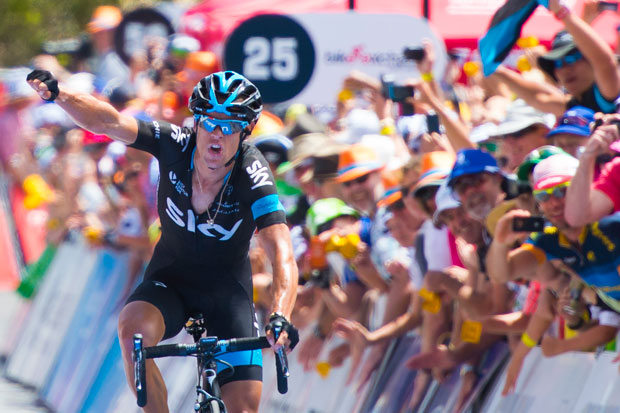 Richie Porte takes the stage to close the gap to 2 seconds.

Movistar team boss José Luis Arrieta admits the Australians are hard to beat at home but is content to have Fernandez claim third place overall.

“They are a little bit better than us…. they’ve been racing here,” said Arrieta. “Richie was strong as usual, and Dennis proved he deserved to win this race.

“For Ruben [Fernandez], in his first WorldTour race, we have to be happy with how he’s racing…. he has a lot of promise.”

The 151 kilometre BikeExchange Stage 5 began in beautiful Mclaren Vale with three laps along the coastal holiday strip of Aldinga Beach before the race turned left for the first of two ascents of Old Wilunga Hill.

South Australia’s Jack Bobridge (UniSA-Australia) went into the stage wearing the polka dot jersey of the Subaru King of the Mountain leader and it was clear he had no intention of relinquishing it.

He was on the attack from the start and after an initial ten man breakaway attempt failed he jumped in when Australian Jordan Kerby (Drapac) attacked and along with New Zealand’s Greg Henderson (Lotto-Soudal) the trio rode away to a lead of more than five minutes over the bunch.

The impact of yesterday’s race crashes saw four riders fail to start and 50 kilometres into today’s stage a bandage swathed Maarten Tjallingii (LottoNL-Jumbo) added his name to the list of race retirees.

Meanwhile the front three headed to the first of the day’s two iiNet Sprint contests at the 63 kilometre mark where Kerby crossed first ahead of Henderson and Bobridge.

There was little change in the race situation in the next 40 kilometres ahead of the second sprint at Snapper Point. This time Henderson claimed the points ahead of Bobridge and Kerby.

The three in front had been setting a pretty solid pace and that took a toll on Kerby who, soon after the second sprint, sat up leaving Henderson and Bobridge to get on with it.

But as per the usual script for the decisive ‘Queen’ stage of the Santos Tour Down Under the peloton was on the hunt and the leader’s margin was coming down fast.

Bobridge needed to get the points on Willunga to hold onto the climber’s lead and Henderson hung in to help breakaway companion as long he could. As the pair climbed up out of Willunga for the first time the Kiwi gave his Aussie mate a farewell hand sling and Bobridge darted off in pursuit of the Subaru KOM points. 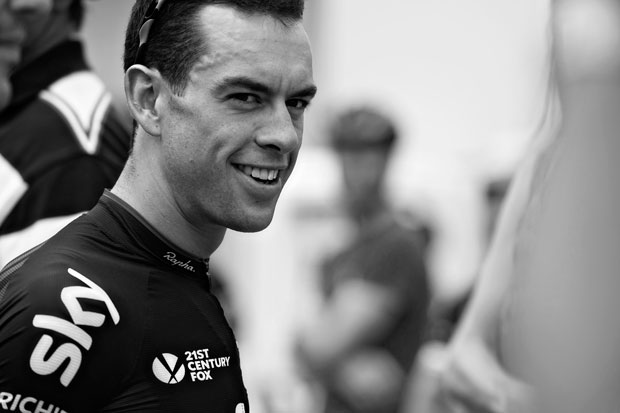 Porte happy with his win. 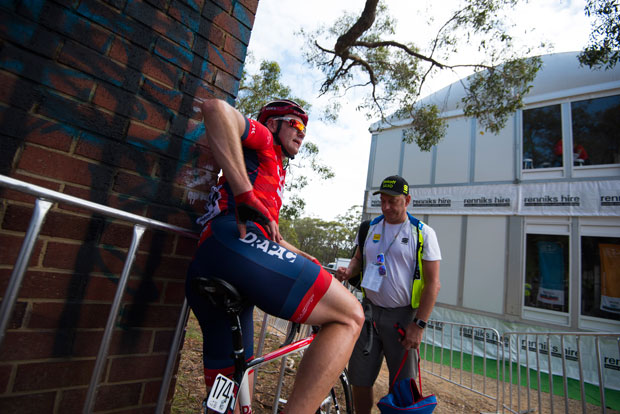 Just chilling out after the race. 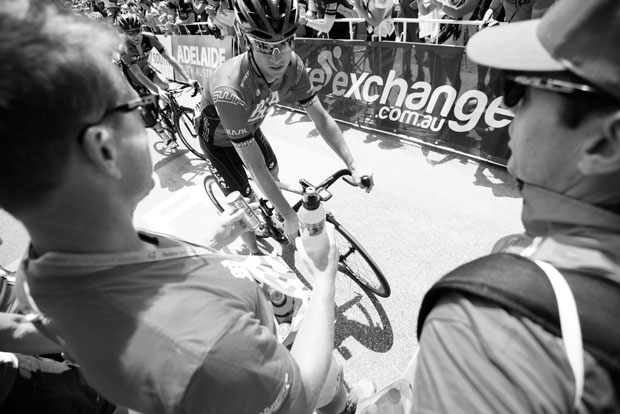 The Soigneurs are ready at the end of the stage to immediately give their riders a drink and food.

It must have seemed to Bobridge that all of today’s 128 thousand spectators were cheering him on as, cocooned in a tunnel of thunderous noise, he sped towards the Subaru KOM arch.

The Astana team drove the chase with Italian pair Dario Cataldo and Davide Malacarne the next two over the top. But Dennis and Evans were on their wheels and in the points as well and the scene was set for the final showdown.

As the race headed back down to Willunga Bobridge was caught and the second time under the Subaru arch it was Porte who picked up the points from Dennis, Fernandez and Evans. They crossed the finish line in the same order 500 metres further on.

Tomorrow’s final Be Safe Be Seen Stage 6 will be raced over 20 laps of a 4.5 kilometre circuit that this year extends from Elder Park up through North Adelaide and back before sweeping up through the city along King William Street to Victoria Square. There will be two Subaru KOM efforts up Montefiore Hill and the iiNet intermediate sprints will be contested at the end of laps 8 and 12.