The 209km penultimate stage at Tirreno with its short, steep climbs and almost 10,000 ft of climbing proved to much for most of the field and for the GC leader Chris Froome. PEZ’s Alessandro Federico was there roadside to capture all the action and soak up the atmosphere at this mammoth day.

The Tirreno Adriatico coming into the Marche region means the end of the winter. Particularly this winter has been very long and the last part of it was very rainy in this area. A day off from the office to chase the cycling is always welcome and on Monday I took the chance to watch a stellar race full of big names that ususally we cannot see at the Giro d’Italia. 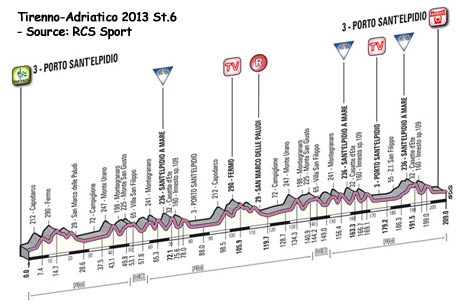 Tirreno Adriatico is very familiar to the Marche, it finishes in San Benedetto del Tronto in the southern part of the region and, usually, there are always two or three stages full of hills with very steep roads. This time just one is designed in such way, it’s the Porto Sant’Elpidio circuit. We are in the middle of the Italian Adriatic coast and the hills are coming infront of the sea, the towns sit on the top of them and the country is very quiet.

I like to watch Tirreno Adriatico because, despite it’s a good level of participation in terms of champions, there’s no hurry and almost all riders are quiet. Today the starting village was located not far from the sea and the sun was shining at the time of departure. 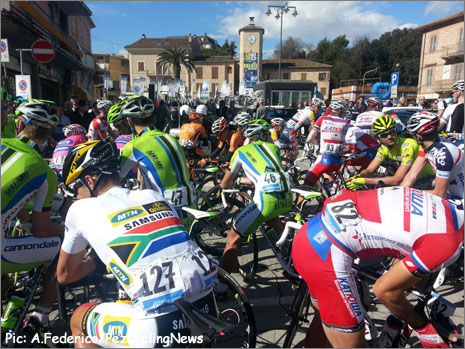 It’s a good moment to speak with some riders; next Sunday in Milan everything will be more difficult because there will be a lot of stress and hurry. I try to catch the guys who will try to win next Sunday at Milan Sanremo. I had the chance to meet Amardor, from Movistar, who is a rider that we see frequently in the breaks; he was very kind and he told me he will be at Sanremo but he doesn’t have any intention to be in a break from far. Same was for Lagutin, the former Uzbek champion that is riding quite well in these races, he will not break early at Sanremo because he would like to try something more serious later on. 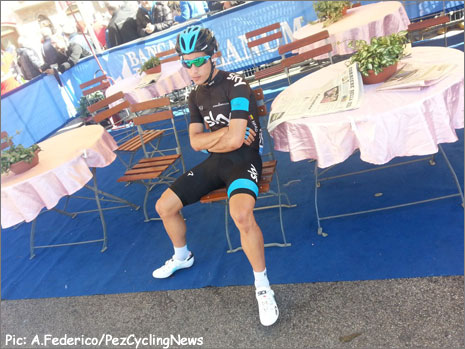 Another guy I had the chance to meet is the Colombian Henao. This is one of the most interesting climbers of the peloton and he was sitting quiet, before the stage’s big battle on a chair, while all the others were lined up for the start. I don’t think Henao will break at Sanremo but it was nice to meet him.

When the race started I moved to my first spotting place; on a top of a small but steep climb. On the west the Appennines are still full of fresh snow and on the other side the Adriatic sea is calm today. 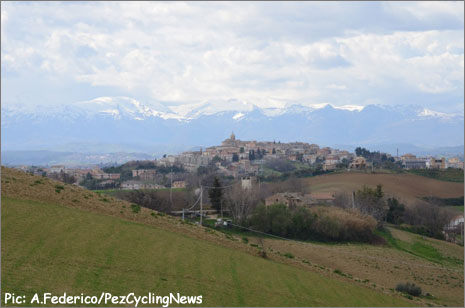 Unluckily it seems that this fine weather is going to change quite fast. On Wednesday or Thursday the snow is going to come back again, even in the flats of the north. I’m already focused for Sanremo and I hope the weather won’t be like the one we had for last Lombardia. Everything becomes more difficult with the rain! 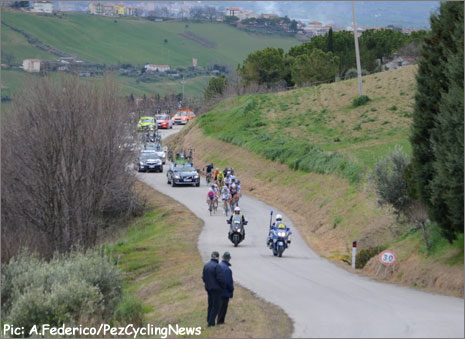 When the race comes there are 16 riders ahead with big names inside. The most important one is Cancellara, who is preparing his spring classic for the best. It will be interesting to see how he will ride today with so many climbs all together. 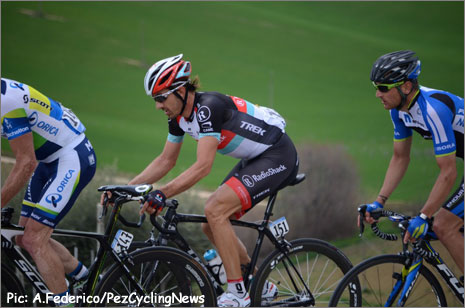 Sky is setting the tempo in the chasing group and there’s already some riders losing the wheels. Bad sign, because it’s 150 km to go, very bad sign. 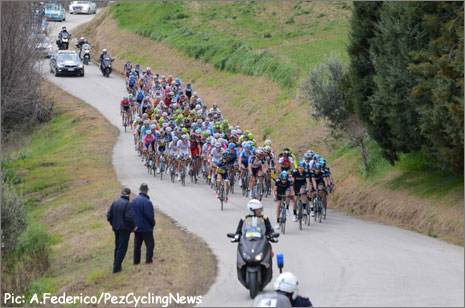 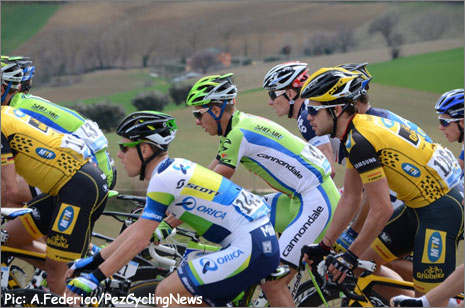 The day’s victor, Peter Sagan sitting comfortably in the pack in the early part of the stage.

While I wait for the second passage the weather changes (already?) and it starts to rain. 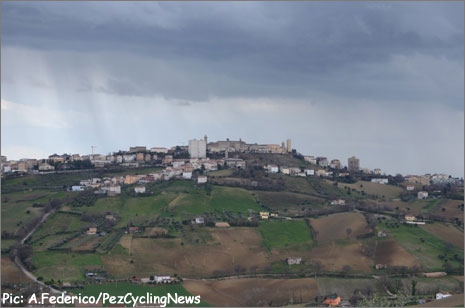 So I decide to spot on the descent, close to a dangerous bend because all riders will use the full brake to safely pass it. 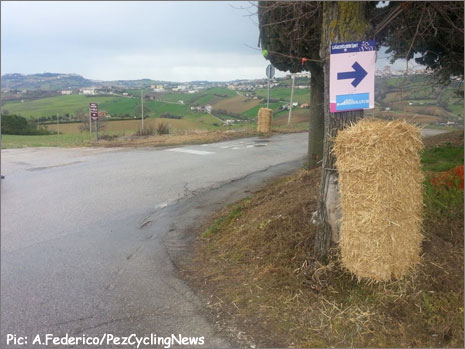 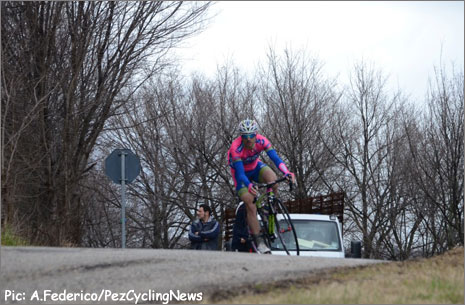 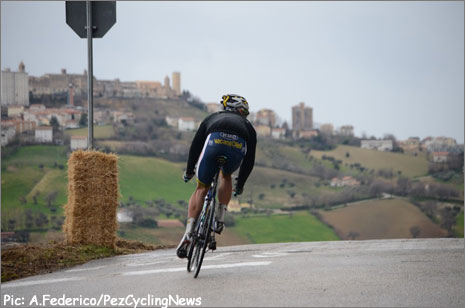 An update with Twitter tells me that several riders are abandoning the race due to the difficulties of the route and the very bad condition of the weather. Tomorrow there will be an ITT so the sprinters are deciding to leave. The break is still alive and the Sky Team are still chasing. 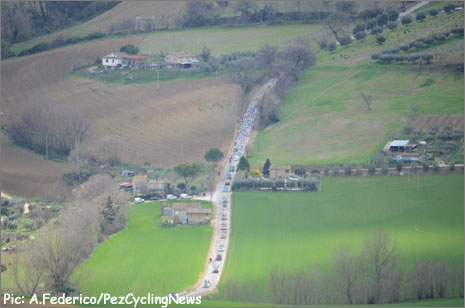 The wind now is cold and seems to be back once again in the full winter time. One rider of the Sky Team leaves the race in front of me. 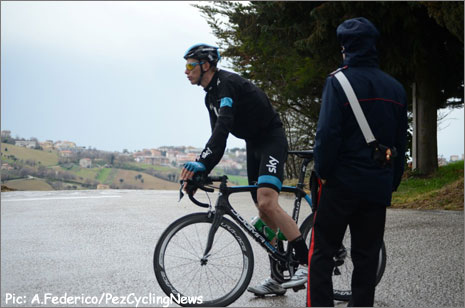 He is in the middle of nowhere and he asks to a cop the road to Porto Sant’Elpidio. The Carabiniere tells him the shortest but unfortunately for the rider the shortest is also the most difficult and I have not the time to stop him and guide him to the smoother one. The riders pass and I decide to move to the last climb; a very steep road about one kilometer long which will probably decide the race.

While I walk over there to find a good place for pictures I see a group of guys enjoying a party despite the weather. “In old bar we trust” this is how they cheers to the race and I’m attracted by the meaning of the sentence. 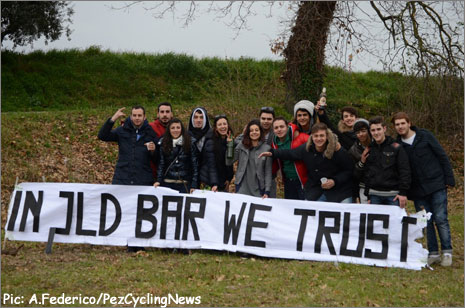 It’s a group of locals who are spending their time differently, they are not really experts of cycling but they like to participate to the event. A picture with them and the promise they will be published on Pez. The difficult part is to spell them correctly the name of the website; seems none of them has learnt English and the “old bar” attitude has done the rest. But they are kind, friendly and they also offered me a glass of local white wine (not bad).

It’s the time of the race and the radio says Nibali has attacked together with Sagan. 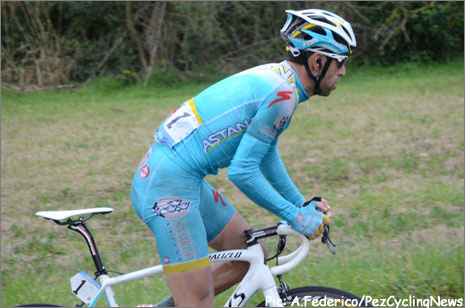 Nibali powering away to the GC lead.

Contador is in pursuit but does not make the difference. Froome seems to be little bit in trouble and it’s last year’s winner Nibali who has seized control. 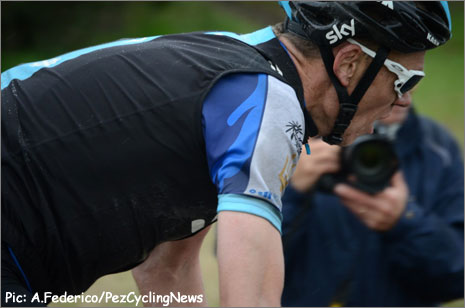 A final mention to my hero of the day. Taylor Phinney has ridden the race alone, in last position with a very big gap all the day. 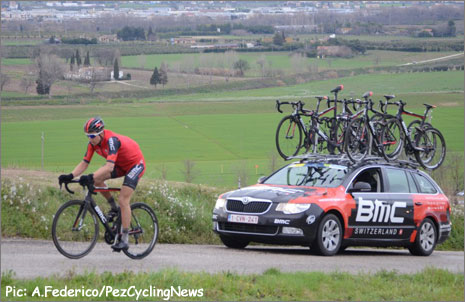 At this time I’m not able to know if he arrived in the regular time or not (Ed: He unfortunately missed the time cut after riding 120km alone), but it was great to see a rider suffering so hard to arrive at the end of the race. Chapeau.

Now, after this very exciting day, I’m already flying with my mind in Milan. The race I wait for since one year will take place next Sunday. It used to be Saturday but RCS moved it. It’s time to count the hours, even the minutes, till the moment another Sanremo will move to the way of the sea.

Race Analysis: A Porte In The Tempest