Strade Bianche Preview: On Saturday, the top echelon of pro cycling takes off in central Italy with the youngest Classic on the calendar, one of the most anticipated by the supporters. The Strade Bianche. 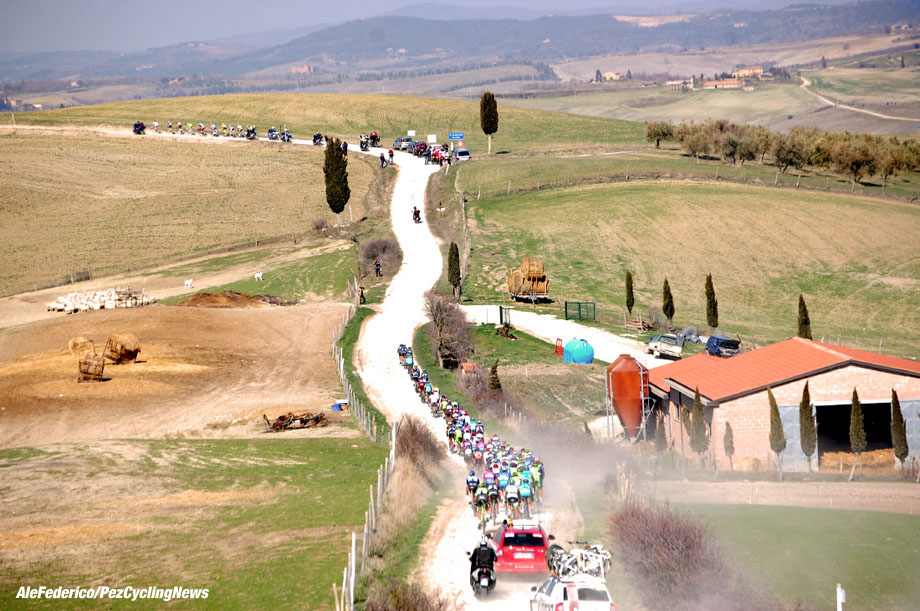 I remember the first time I watched it, it was 2010 and Pez had to insist a bit with me. I was reluctant to invest time in a race with only 3 editions in her book. It was for me a revelation. Not just the race, but also the countryside, the roads and that shivering atmosphere you can only experience at the side of the road at a big race convinced me at the first look. I’ve returned every year since. This race is very short, just 175 km, a loop starting from Siena, one of the iconic towns in Italy, going south and coming back after touching its southern point at Montalcino, the famous red wine location. 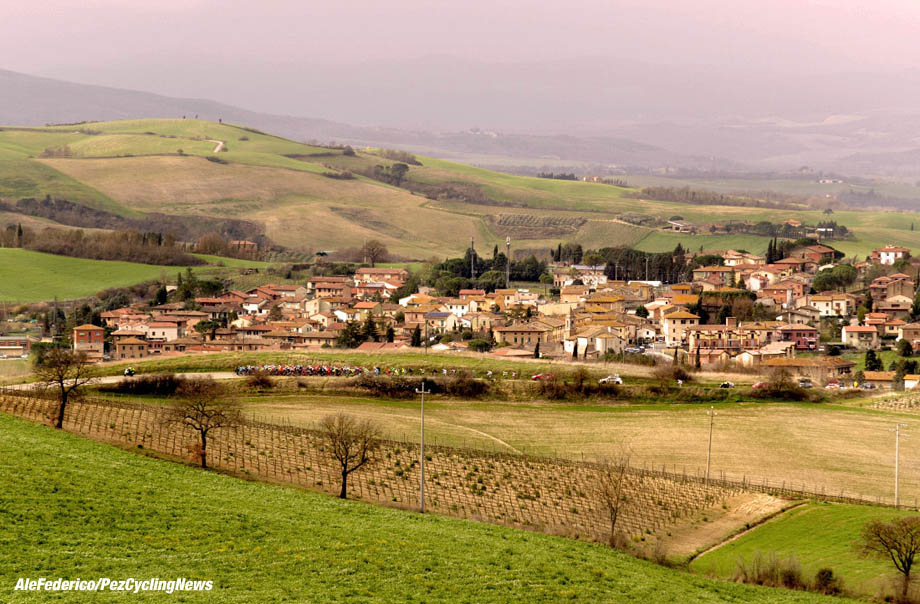 There are no big peaks to overcome but the big moves in the bunch start quite early and it isn’t unusual to see the favorites leading after just two hours of racing. This is gives this race a lot of charme and when you switch on the television to watch it you may be sure that something has already happened or it’s going to happen soon. 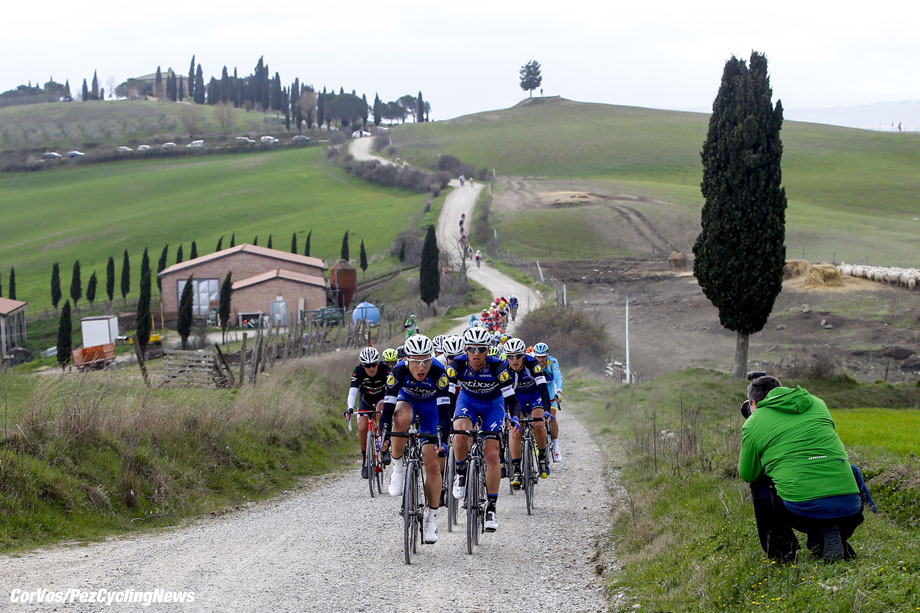 Quick-Step will be strong – as usual

The gravel and the risk of mud
We can’t talk about Strade Bianche without talking about her gravel. The name of the race itself (the words “strade bianche” means “white roads” in Italian) suggests that this is a key element of this competition. Locals use the gravel you find in this region for everyday transit. The surface is quite comfortable and you can also drive fast on it with a certain margin of safety. However you’re not on asphalt and you always have to watch for grit and small holes. On a road bike these aspects are stressed further and the descents are in some cases are more selective than the climbs. It’s not a surprise that Sagan always shines bright in Siena (but he never won) because thank to his riding abilities he can save a lot of energy that he can spend in the final. 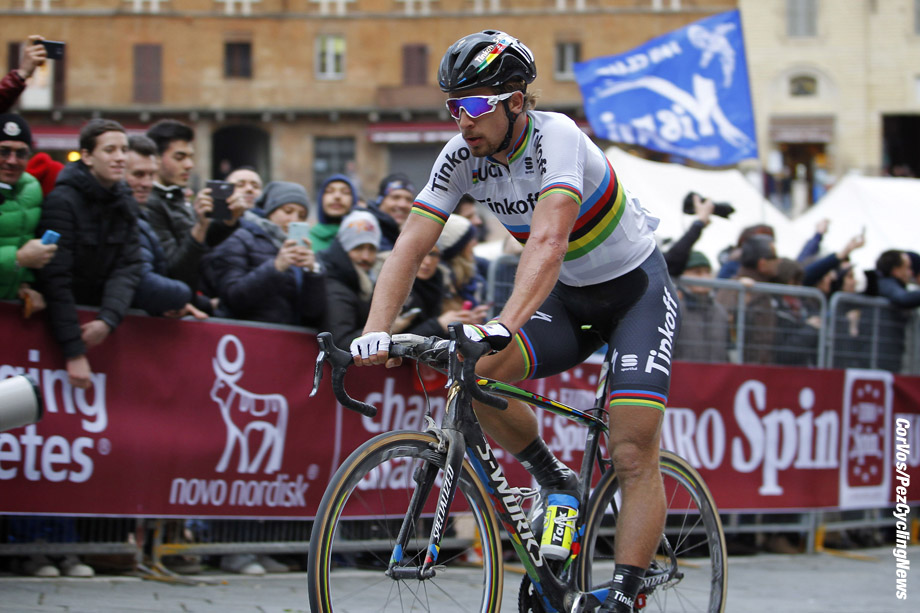 Can Sagan do it this year? 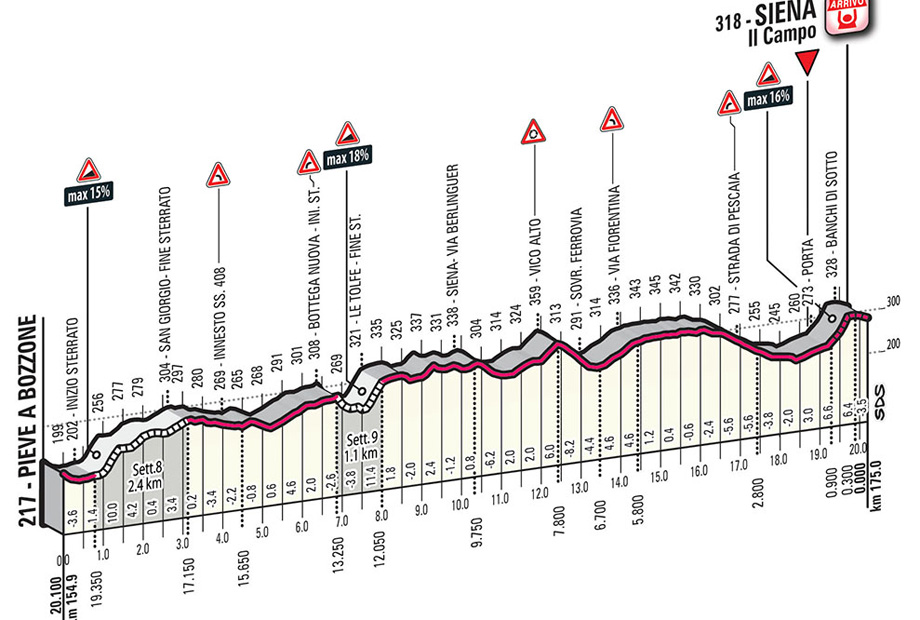 Gravel means a lot of dust and riding in the last position of the peloton is, for sure, a pain because of the clouds you have to digest during the race. But gravel could also mean mud in the case of rain. It has never happened in 10 editions, but that day it will come and we will see what is can happen. Locals say these roads are so well prepared that the rain is drained perfectly from the surface, but I believe some of you will remember the 2010 Giro d’Italia 2010 total muddy stage won by Cadel Evans: that stage finished in Montalcino and the first sector was one used by Strade Bianche

at 1:20 they enter the Buonconvento sector

March in Italy is still a dry season (in April would be very different) but sometimes an Atlantic depression may pass through the Mediterranean and take heavy rain. 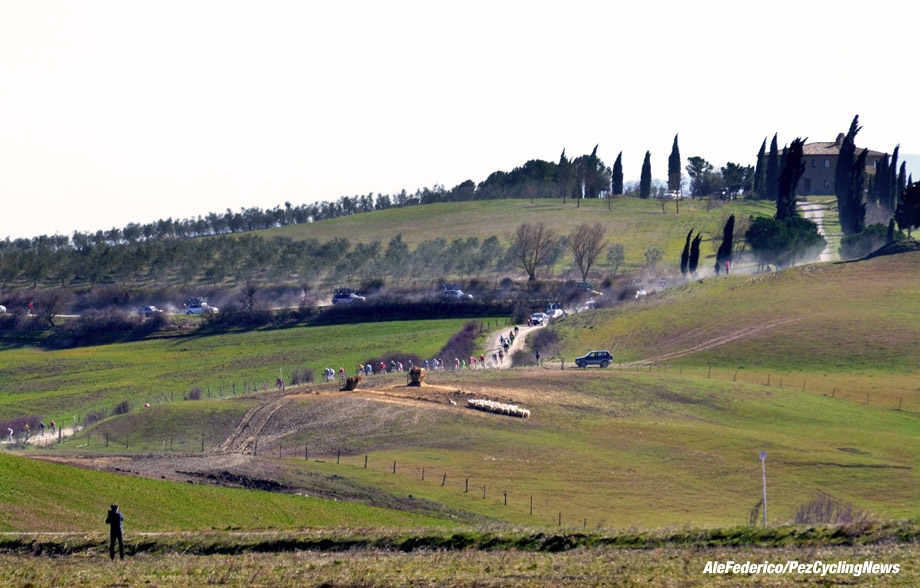 San Martino in Grania: the road takes off, starts the battle
The first six sectors of white roads come too early for the big battle but they must not be underestimated. Even if the bunch isn’t split riding those roads is not an easy challenge. Who rides well and comfortably may save a lot for the final kilometers. Sometimes crashes and mechanicals are also complicating the life for those already in trouble or riding too far back in the bunch. Anyway, everything will start in Monteroni d’Arbia after 100 km of racing when the road will climb up to San Martino in Grania. This sector was first used for women in 2015 and introduced also for the elite last year. It’s long and hard. The gravel in some places is also in bad shape, it’s definitively a selecting one. Last year Brambilla took the lead on this sector and we still found him at the front a few meters from the finish. This is also one of the most scenic area in the region, it is named “Crete” with several hills with not one tree all around; it looks to be a kind of desert with a stunning view onto Siena’s ancient towers. 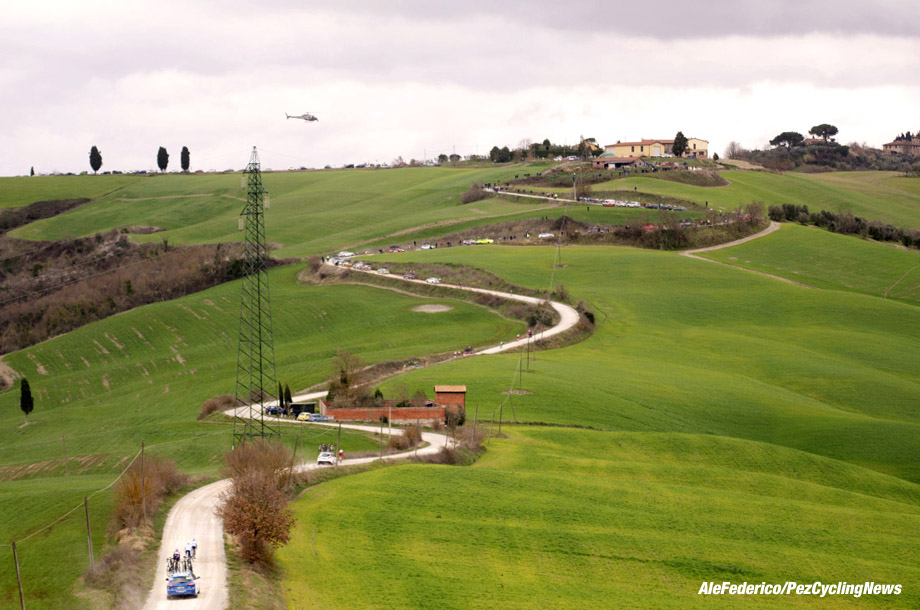 The key sector: Monte Sante Marie
This road was selected from the very first edition as the key sector of the race because of its steep climb and frantic descents. In summary there are two very steep sectors divided by a twisty descent, and after the second climb a long flat portion of road. On the first climb the group is stretched, on the descent it is split and on the second climb (longer than the first) the best of the day (no more than 20 or 30 riders) leave the others. On the last flat part those best riders will just increasing the gap and for the others – the race has gone, see you next year. 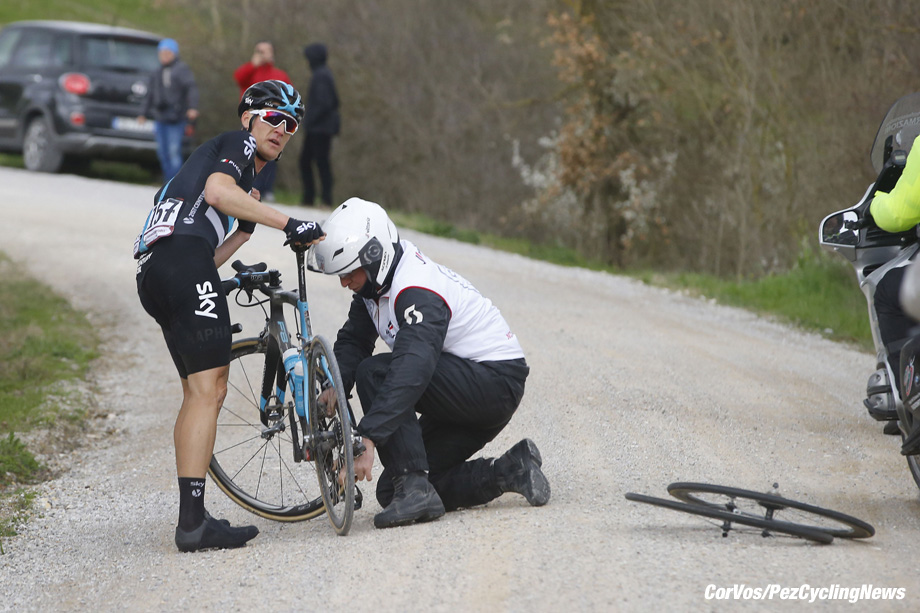 Maybe it’s just a coincident, but this sector starts from Asciano’s cemetery and finishes at Torre a Castello’s cemetery: let’s just say it was not built for fun! There are really few tactics a rider can use here; just good legs and riding abilities may save you. If you have no legs you will be too far gone at the beginning of the descent, packed with all other riders and unable to ride the best line in the “rollercoaster”, but if you can’t ride the strade you will loose too many positions on the descent, finding yourself too far from the head when the second decisive climb starts. This sector of road will be dedicated to Fabian Cancellara, who is the only rider to win this race three times; in fact no one has won it even twice. The Swiss rider was perfectly fitted for this competition, what surprises me more is Sagan who never won it yet. The Slovakian, on paper, is the best rider you can choose for the Strade Bianche, but he was second twice and fourth last year. Anyway, both riders made the difference on Monte Sante Marie. 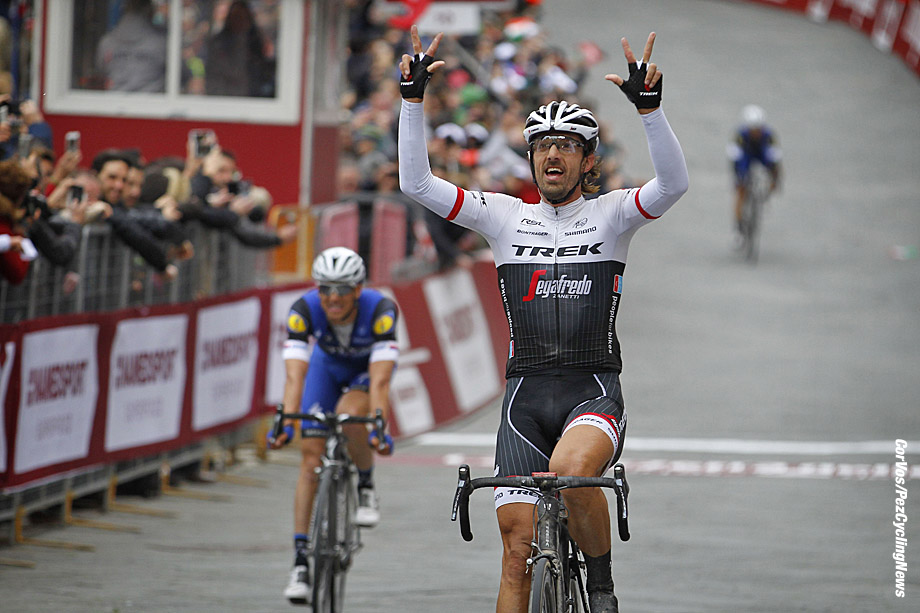 The three steep climbs… Take note!
At Torre a Castello there are still 40km to go, but suddenly the route takes a pause and the selected group of the best finds 15 km of large roads almost flat… (almost!). At 25 km to go the race changes its rhythm again and there are three short steep gravel roads to wait for the final selection: Monteaperti, Colle Pinzuto and Le Tolfe. If you look at the last five editions you’ll find that the key move of the day was on one of these three sectors. All of them are really only a few kilometers from Siena but now the race goes around it from east to southwest to the ancient entry of the mediaeval center through the Fontebranda gate. 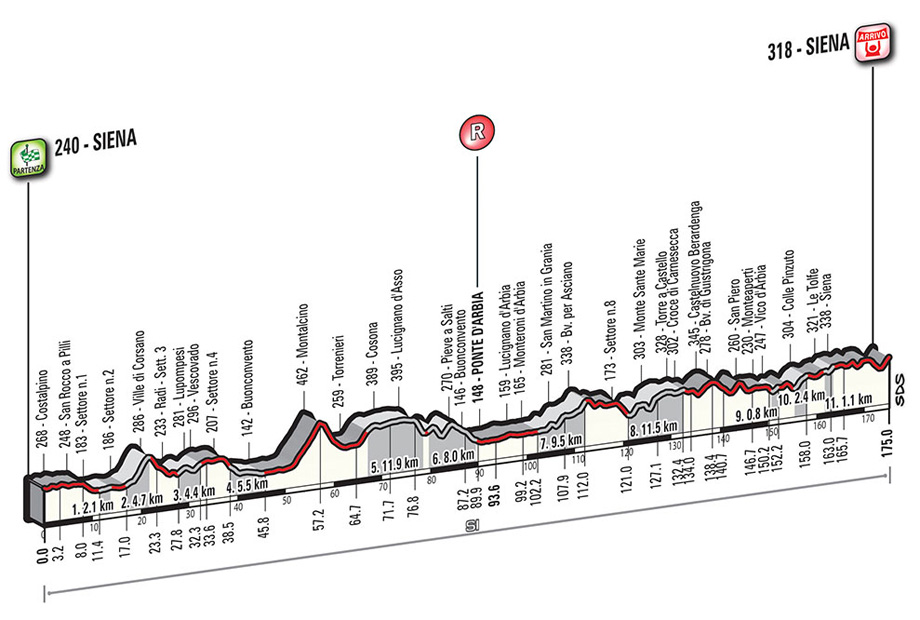 Via di Santa Caterina in Siena
Everything we’ve seen earlier is spectacular but this race is not a regular one and there are surprises all the way to the finish. All Italian towns built through the centuries; often walls surround their center, as that was the way to defend the population during the Middle Ages. Siena is still surrounded by ancient walls and the race will come through one of its gates, the one named Fontebranda Gate. From this point the last 1000 meters are awaiting the riders for the last selection. Santa Caterina is the name of a small street that climbs to the top of the town center. This road is very steep, especially its last 100 meters and the race is often decided here. A rider passing first at the top (a hard right turn) has big a chance to win because the remaining 400 meters are twisty in the old town center roads and there’s not the room, physically, to overtake a rider at the front. Brambilla last year was first at the summit, but he was left with no energy and lost anyway. 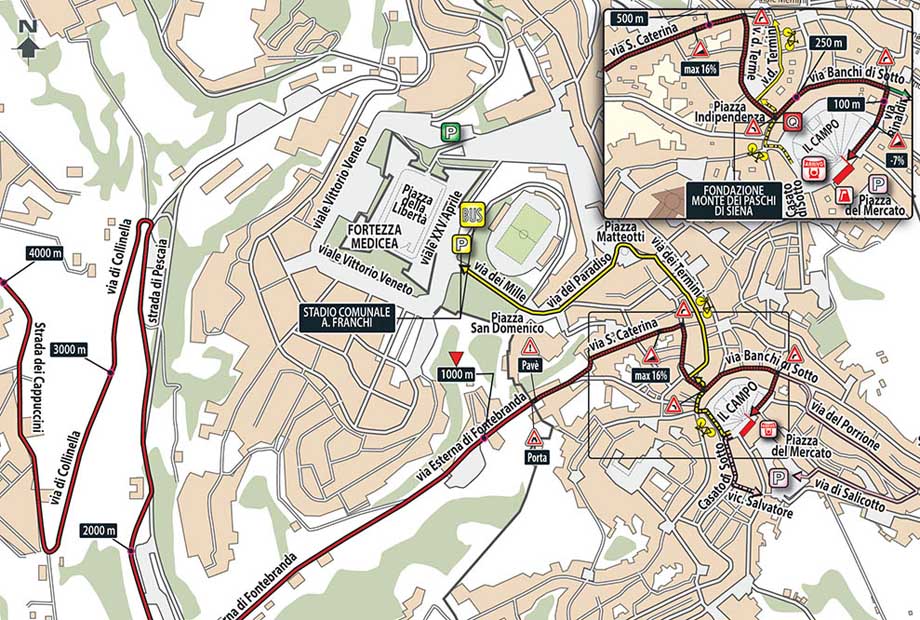 Conclusions
It’s a new race (10 editions are not many if you think that Liege-Bastogne-Liege has got almost 120), but it’s really fascinating because it takes place in one of the most beautiful regions in Italy (Tuscany) and because of its exciting route of gravel, climbs and descents. The favorites have to be in front of the race from 100 km to go. The big selection is on Monte Sante Marie but the final word is on Via Santa Caterina, at 400 meters to the finish. A muddy race is always possible, but in ten editions we didn’t have one because of the dry season. 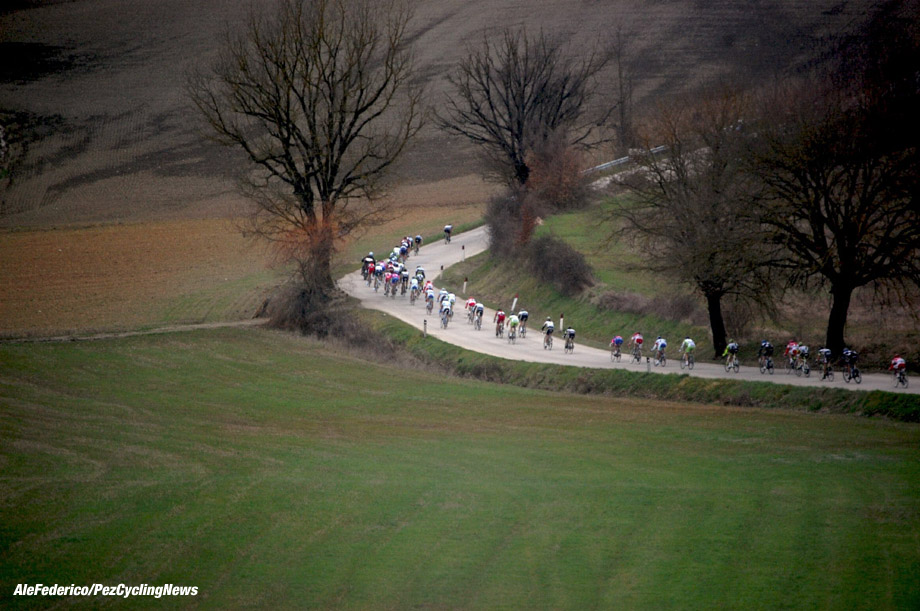 Contenders
Quick-Step: Will be there and this is enough to understand they will do their best to win. Last year two steps of the podium were theirs (the wrong two) but they won the previous two editions and considering they rode just three it’s not bad. In their team Stybar seems ready and Brambilla will have more space. Is Boonen going to ride his first one? 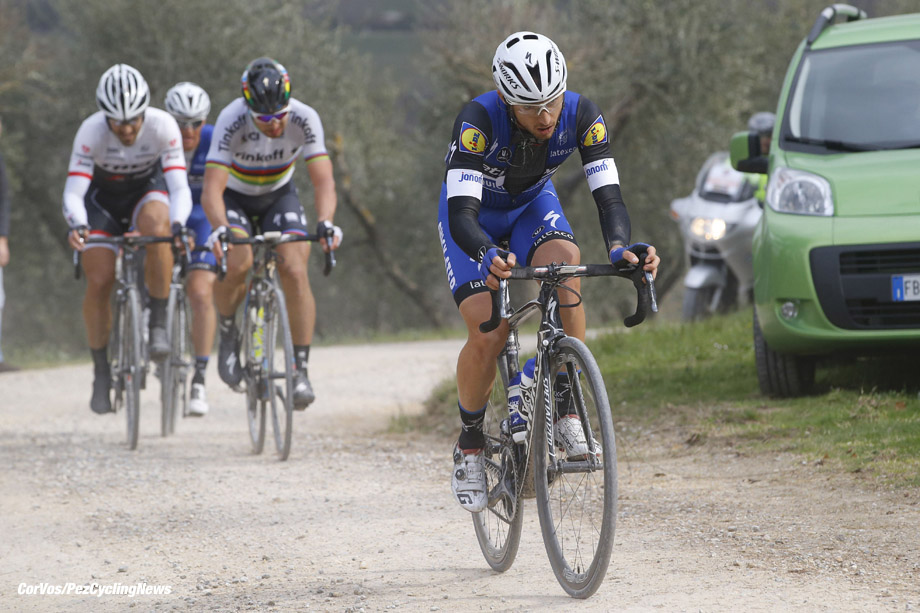 Gianluca Brambilla on the attack

We welcome back Sep Vanmarcke who rode a great edition in 2015 (last year he skipped it), he was out of the podium because he was unable to join Stybar, Van Avermaet and Valverde in the final. He demonstrated that he is the right rider for this race. 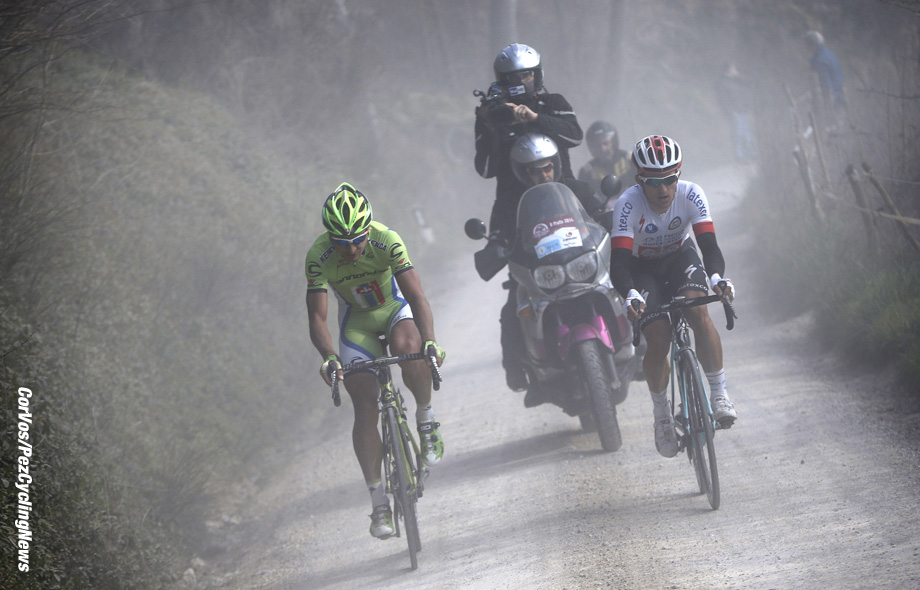 Kwiatkowski and Sagan in 2014

Kwiatkowski, it’s an easy pick because he is a former winner (2014) and he is in good form but I would give more than a chance also to Van Avermaet who was second in 2015. One who has never won but fits perfectly for this race is Sagan, will be part of the challenge? 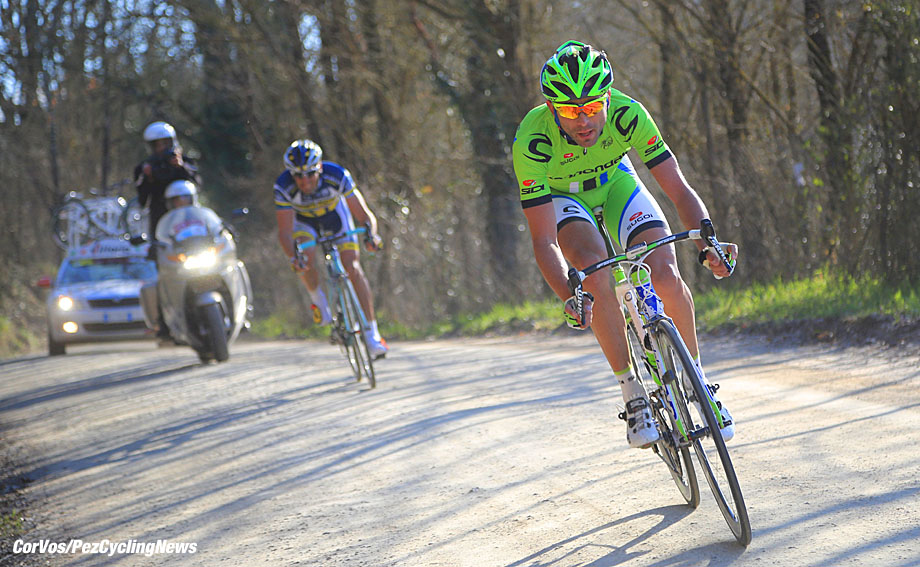 My favorite? In ten editions just one Italian has won the Strade Bianche (Moreno Moser in 2013) but I feel this is the right year: Who? Fabio Felline to me seems the best one at the moment but I will mention also Trentin because he is with Quick-Step. 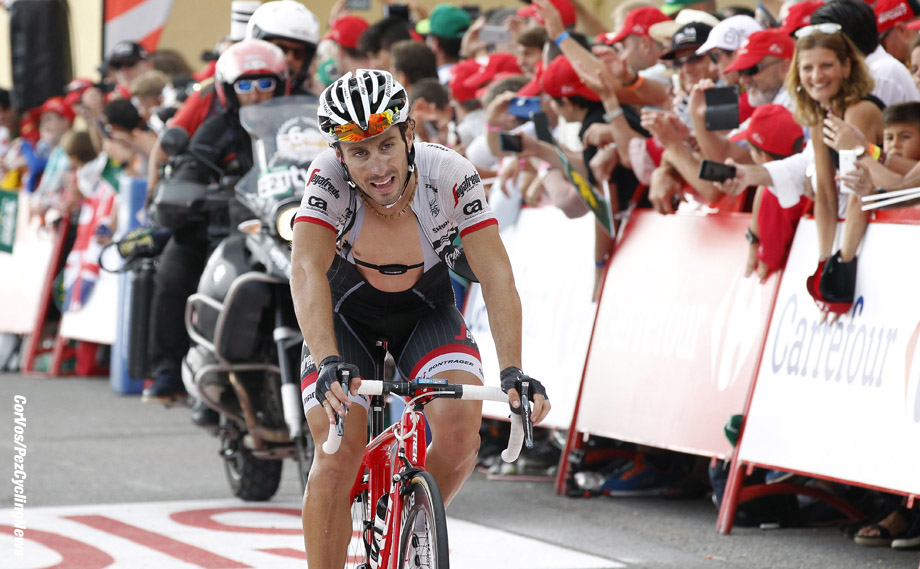 Most probably I missed the best name, but I’m sure I’m not wrong when I predict it will be a fantastic day!

# Keep up with all the Strade Bianche news on PEZ and watch the live action on Steephill.TV. # 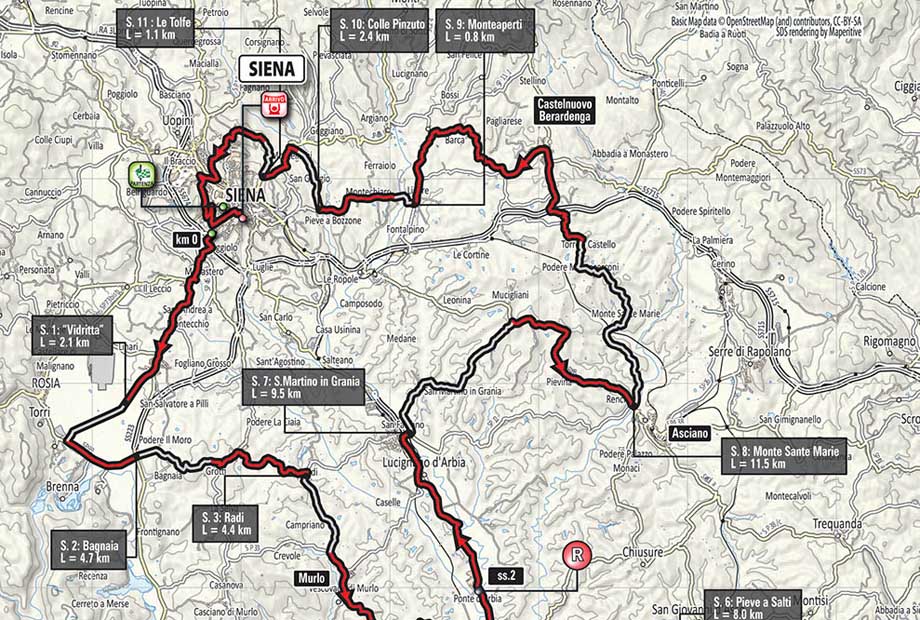