Trofeo Laigueglia Preview: As the season and the weather starts to warm up in Europe, the race calendar hits the Italian Mediterranean coast for the Trofeo Laigueglia. In this second Italian race of the year, after the GP Costa degli Etruschi, the teams will be looking for early success in the build up to the season proper. Daniel Thévenon takes a look at the History, course and favorites for Sunday’s Italian Semi-Classic.

General Overview:
It is that time of year again when frantic cries of “Pedalare! Pedalare!” can be heard resonating in the hills of Liguria, sending birds fleeing by the hundreds and attracting passionate tifosi in their thousands. This Sunday 12 February sees the 54th edition of the Trofeo Laigueglia take place. 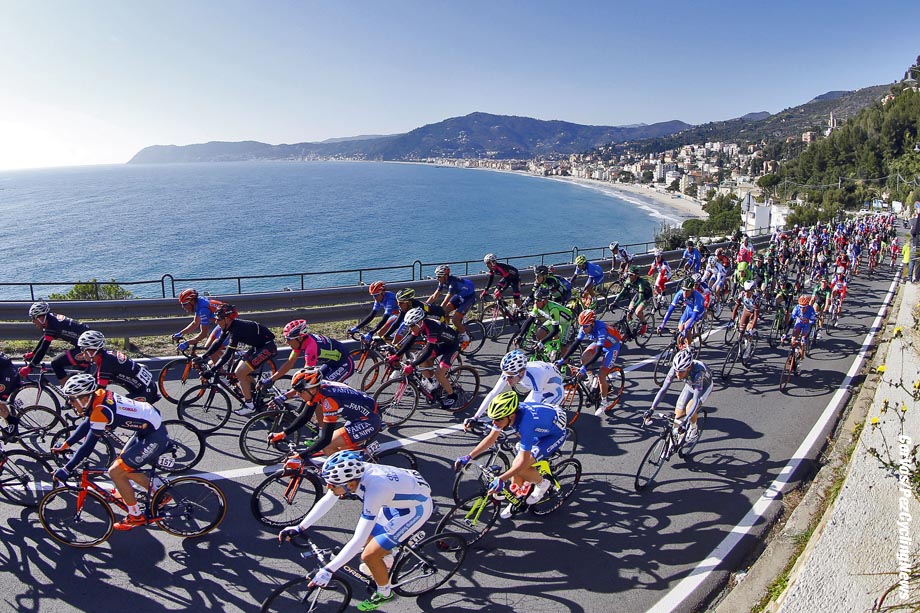 A nice ride up the coast

One of Italy’s traditional winter classics, ranked as an Hors Categorie event, the Trofeo may lack the glamour of some of the cycling calendar’s glittering World Tour races, but it still has plenty to offer the aficionado, whether it be fantastic landscapes, an exciting, climb-studded course that promises to provide rich entertainment, or crucial insights into the current form of key riders in the run-up to important rendezvous such as Paris-Nice or Milan-San Remo, not to mention the eagerly anticipated centennial edition of the Giro d’Italia this May. The Trofeo Laigueglia also offers spectators the chance to see less well known teams and riders rubbing shoulders with some of the best in the business.

History
The race’s origins go back to the 1960s, when it formed part of a host of early-season contests organized in Italy due to the country’s clement weather conditions at this time of the year. While many of those races have since disappeared, partly as a result of increasing competition from Australia and the Middle East in recent years, the Trofeo survives, doubling up as a prestigious competition in its own right and an excellent preparation for later objectives. 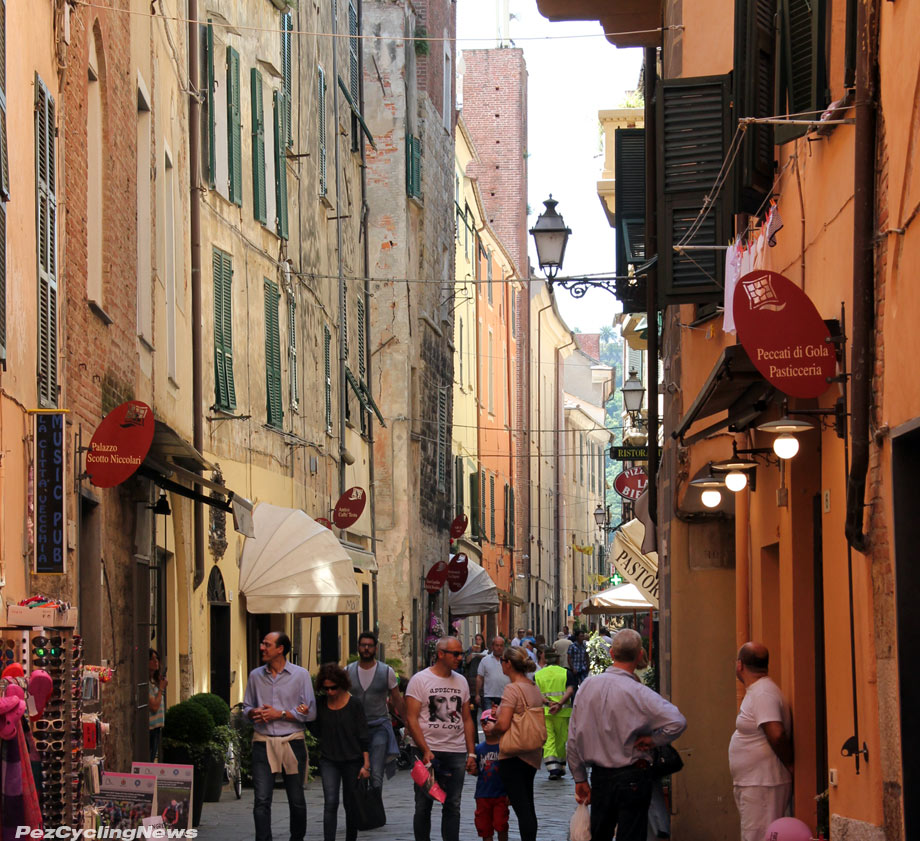 Albenga is a typical Ligurian (Italian) town with narrow streets and a picturesque center – and sees the race come through a few times.

Laigueglia’s flagship race has a long and colorful history. Early victors included Franco ‘Crazy Heart’ Bitossi, a man whose doctor famously recommended that he stop midway through races if his pulse became erratic, and the great Eddy Merckx, conqueror of the event in 1973 and 1974. Cancer hero-cum-villain Lance Armstrong won his first professional race at the 1993 Trofeo Laigueglia, and the 1999 edition ended in farce when the victor, Italy’s Paolo Savoldelli, was apprehended and whisked away by the carabinieri to be interrogated as part of an ongoing doping investigation mere seconds after cutting the line. Though it has been for the most part dominated by Italian riders over the years, with the likes of Giuseppe Saronni, Michele Bartoli, Danilo Di Luca, Alessandro Ballan and Filippo Pozzato all lifting the Ligurian trophy, champions from foreign shores have also had their day, from the Danish ace Rolf Sørensen to Switzerland’s Olympic gold medalist Pascal Richard and Colombia’s man with the mustache, José Serpa. 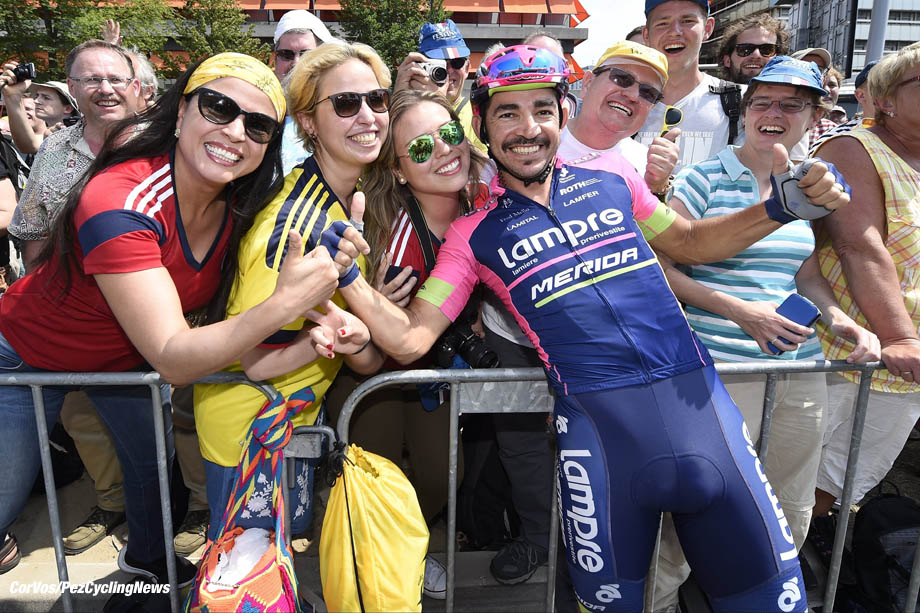 The Course
This year’s parcours has been described as technical and selective, with a mountainous introduction and a hilly finale. Neither made to measure for the sprinters, nor tailored to the pure climbers, the Trofeo should reward aggressive riding and may well crown a baroudeur. 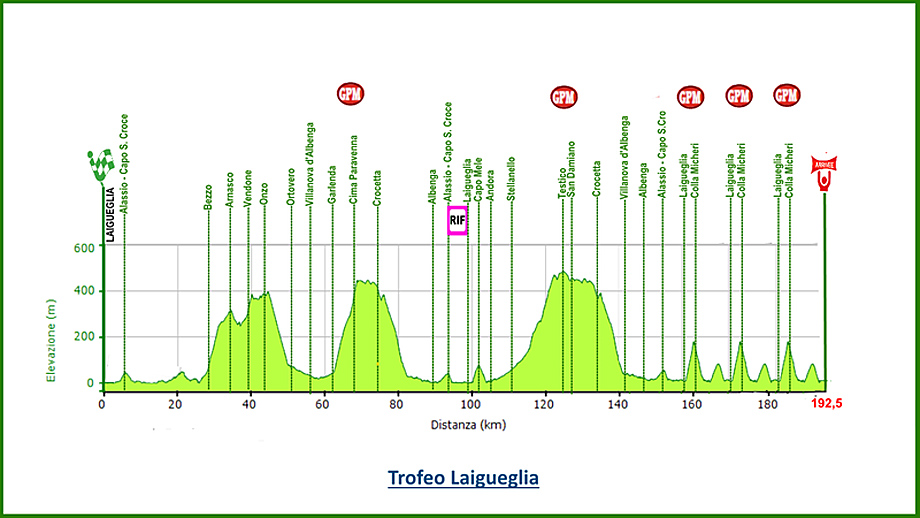 The 192.5 kilometer course starts and finishes in the small coastal town of Laigueglia, through which the race passes a total of six times. The riders depart from Kilometer 0, on the Via Roma, at 11 o’clock in the morning, and then progress along the scenic Ligurian coast, heading in the direction of the touristic ports of Alassio and Albenga, before turning inland and entering the region’s hilly hinterland. 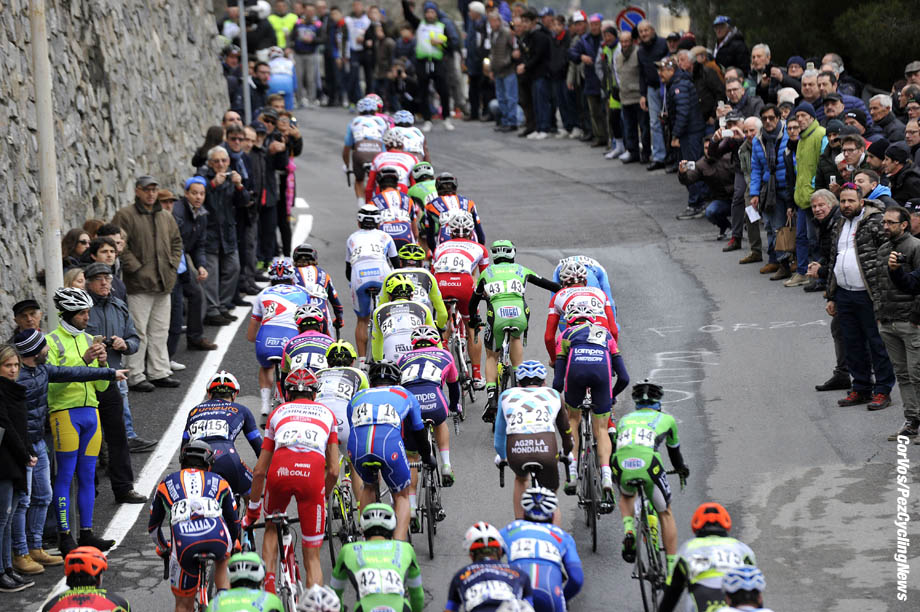 Short climbs on the finishing circuit

In the opening 125 kilometers, four taxing climbs promise to whittle down the field. First comes the anything but straightforward ascent to Onzo, reached after 25 kilometers, and followed, a little farther, after a perilous high-speed descent, by the much-feared Cima Paravenna, with a summit situated at an altitude of 457 meters, before the athletes tackle the Capo Mele, an uphill passage of 1.8 kilometers in length boasting an average gradient of 3.9%. This precedes the grueling test that is the ascent of the landmark Testico pass, which is to the Trofeo Laigueglia what the Poggio pass is to Milan-San Remo or the climb up to Madonna del Ghisallo to the Giro di Lombardia. 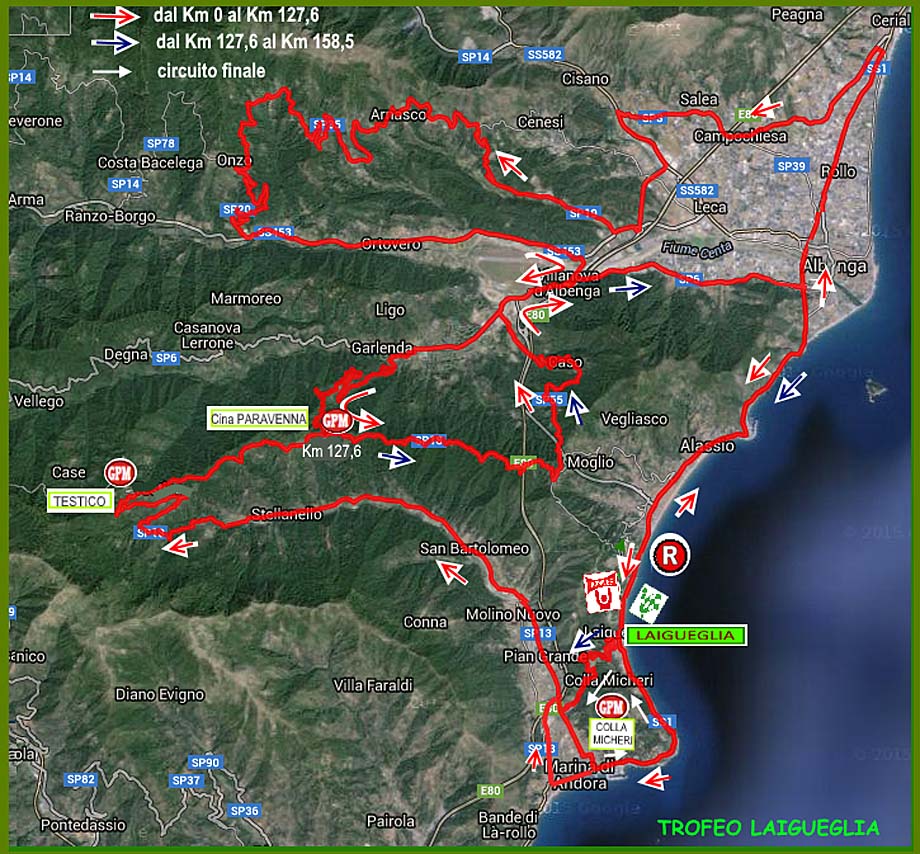 The Testico is crested with just under 70 kilometers remaining and the final part of the race sees the riders enter a rolling 12.6 kilometer circuit around Laigueglia, to be completed three times, peppered with short but sharp climbs reminiscent of those found on the obstacle course of Liège-Bastogne-Liège. Three repeat ascents of the Capo Mele and a triple dose of the Colla Micheri (2.6 kilometers long, with an average gradient of 6.2%) should see the strongmen of this year’s Trofeo Laigueglia pull clear of the rest of the field. The winner is expected on the finish line at around 4 o’clock.

The Favorites
Due to an increasingly packed February calendar, the Trofeo now struggles to attract as many stars as it did in the past. Nevertheless, four of the elite World Tour formations will take part in this year’s race: Astana, Française des Jeux, AG2R La Mondiale, and UAE Abu Dhabi. They will be joined by eleven Continental professional teams, seven Continental teams, and by an Italian national side, amounting to a total of 23 teams. 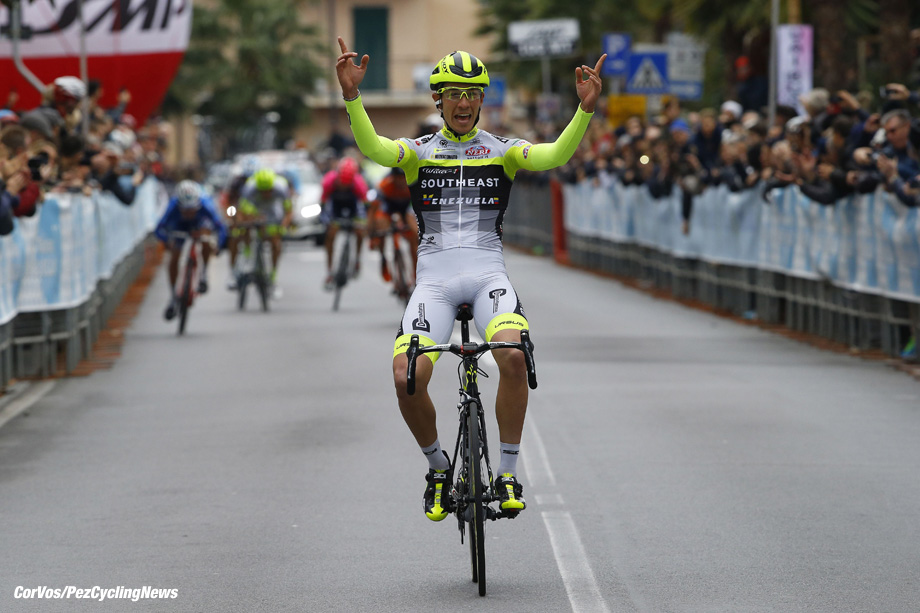 The defending champion, 25-year-old Tuscan Andrea Fedi, riding for the continental Wilier Triestina formation, will return from injury to defend his hard-won crown. Last year, Fedi took the trophy after cannonballing out of a small break-away group in the finale but this time he will be a marked man. 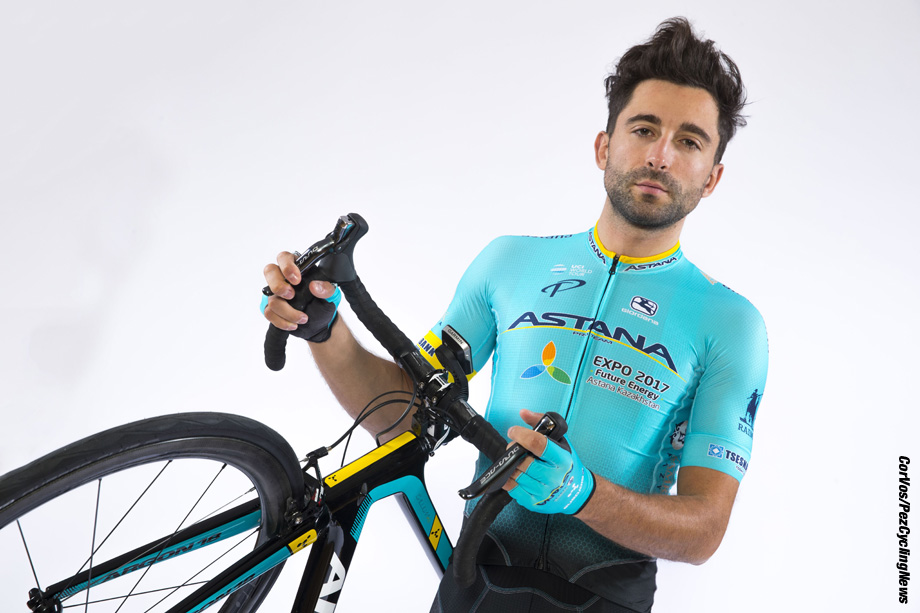 Diego Ulissi (UAE Abu Dhabi), who last week won the Gran Premio Costa degli Etruschi, traditionally the inaugural race of the Italian cycling calendar, logically features among the top favorites for this year’s Trofeo Laigueglia. The man from Cecina, who achieved a brace of stage victories at last year’s Giro d’Italia, is in fine form at this early point in the season and his team has enjoyed success at the Trofeo before, having won the 2013, 2014 and 2015 editions of the race under previous sponsor Lampre. 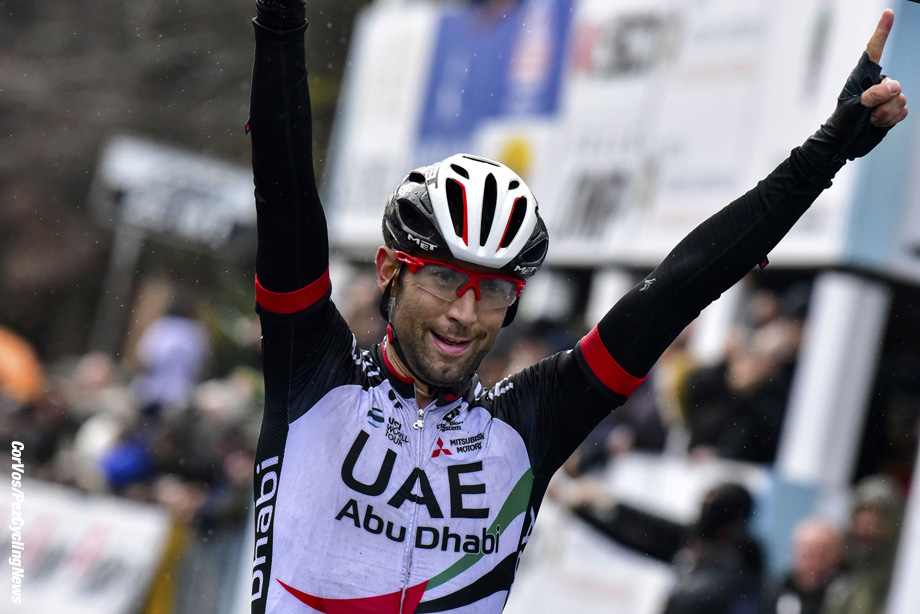 Other notable participants include the French star Thomas Voeckler (Direct Energie), winner in 2016 of the Tour de Yorkshire and hero of the 2011 Tour de France, and his team-mate Lilian Calmejane, the winner of Etoile de Bessèges, as well as their compatriot, the gifted young grimpeur Pierre Latour (AG2R-La Mondiale). The versatile Fabio Felline, winner of the points jersey at the last Vuelta a España, spearheads the Italian national side. Moreno Moser (Astana), a scion of one of Italy’s great cycling dynasties, and Francesco Gavazzi (Androni Giocattoli – Sidermec), who is no stranger to the Trofeo Laigueglia’s podium, having finished second two years ago, should also pose a threat. The promising Valerio Conti (UAE Abu Dhabi), who took a stage at the last Vuelta a España and now returns to the frame after suffering a broken wrist, is also one to watch. 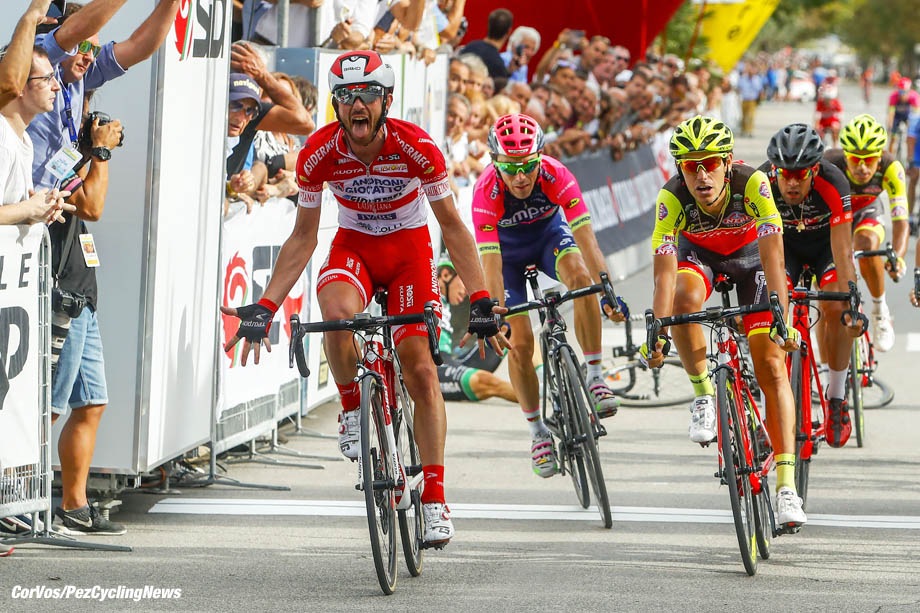 Live action on Sunday at Steephill TV and result and video in EUROTRASH Monday.

The finalé of the 2016 Trofeo Laigueglia: