This Sunday brings us the last Monument of this year’s spring campaign: Liège-Bastogne-Liège. Ed Hood runs a keen eye over the long, star studded history of La Doyene, examines the course and picks the winner for the 2015 Walloon Classic. The PEZ Liège preview.

Luik – Bastenaken – Luik they call it up in Flanders; Liège – Bastogne – Liège down in French speaking Wallonia. ‘La Doyenne’ is her Sunday name, meaning; ‘A woman who is the eldest or senior member of a group.’ With this being the 101st edition it’s hard to argue with that definition – bearing in mind that nine editions were lost to the two World Wars with the Ardennes parcours the scene of the ‘Battle of the Bulge’ the last, desperate German counter-attack of the World War Two. Milan – Sanremo may be longer; Paris – Roubaix crazier and Lombardy more beautiful, but Liège is the certainly the oldest – first run as an amateur race in 1892 – and arguably, the toughest. 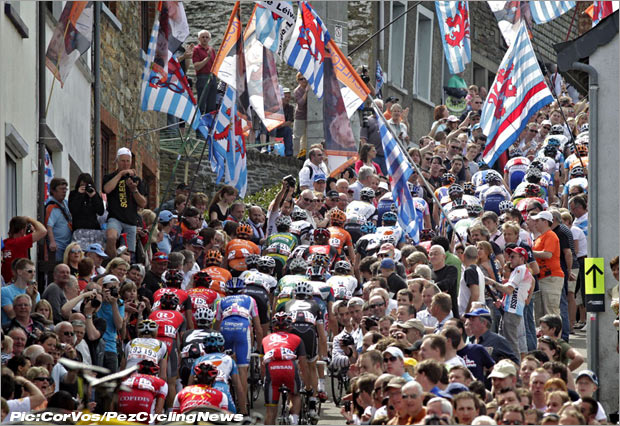 The climb of St.Roch may no be race defining, but it is one of that’s as much a part of Liege as La Redoute.

The parcours
The route does as it says on the tin; the 253 kilometres start by heading south out of post-industrial Liege (main town of the province which bears its name) to Bastogne (rather confusingly situated in the Belgian province of Luxembourg) and back again to finish at a disappointing and drab retail park in the Liège suburb of Ans – which happens to be at the top of an endless climb past defunct factories, mine workers’ houses, shops and garages. 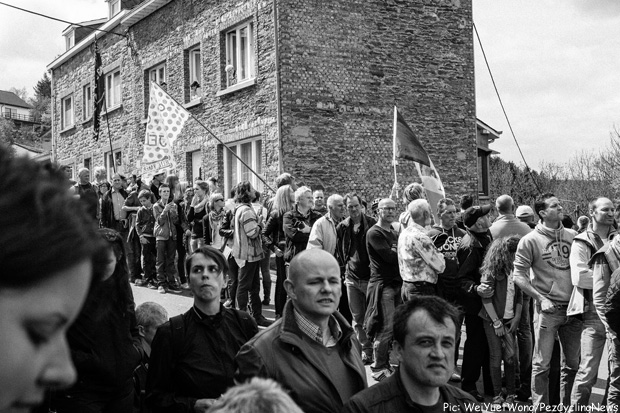 It’s arguable that Ans has stilted the race to an extent – with most of the field ‘keeping their powder dry’ (copyright Dave Duffield) for the final gruesome urban grovel up to the line. Just in case the first time competitor has any doubts about what the race is like, whilst the first of ten categorised climbs comes late at 79 K, the parcours climb from the very ‘off.’ The race profile looks like an advert for high quality timber saws; if there’s a ‘flat bit’ on this course, then it’s hiding somewhere in the 253 kilometres of ascents and descents that make up this last classic of the Spring season. 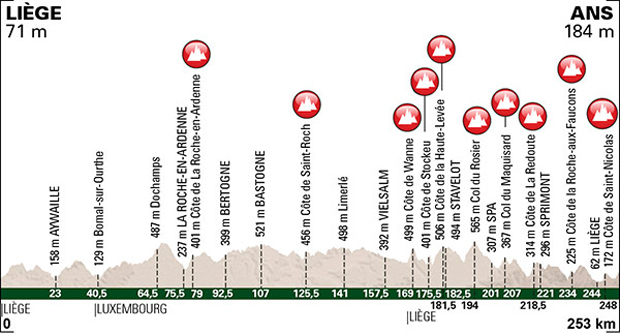 The names of the climbs are familiar Wanne, Stockeu, Haute-Levee, Rosier to name but four and, of course – La Redoute.

La Redoute used to be where the winner would make his move; but in these days of riders peaking for just one race each year it’s no longer decisive; albeit that it’s still a great place to watch the race with it’s huge crowds, giant screen TV, bars and barbecues. ‘Back in the day’ L-B-L used to run back to back with the Flèche, the two races were known as the ‘Weekend Ardennais.’ 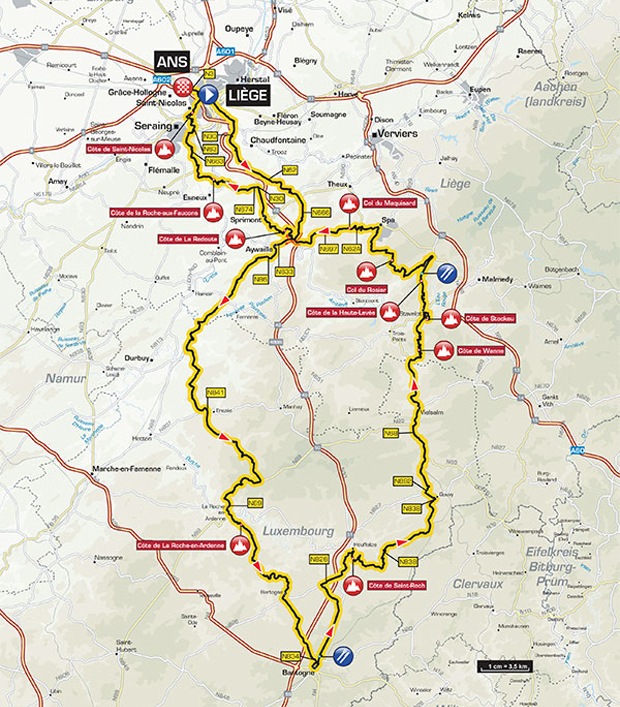 The renners of the past
Only the best riders of their respective generations have won both races in the same season; Ferdi Kubler (Switzerland) twice 1951 & ’52; Stan Ockers (Belgium) ’55; Eddy Merckx (Belgium) 1972; Moreno Argentin (Italy) 1991; Davide Rebellin (Italy) 2004; Alejandro Valverde ’06 and Philippe Gilbert ‘11

Unsurprisingly, ‘Big Ted’ – as we named Baron Merckx back then – is the ‘record man’ on five wins with Venetian classy Argentin on four. It’s also no surprise that Belgium leads in the role of honour with 59 wins; Italy is a distant second on 12 with Switzerland in third spot on six. Belgium’s last win was courtesy Phil Gil in 2011 but it was way back in 1999 when classy but wayward, the late – and many say great – Frank Vandenbroucke gave Belgium a win prior to that. 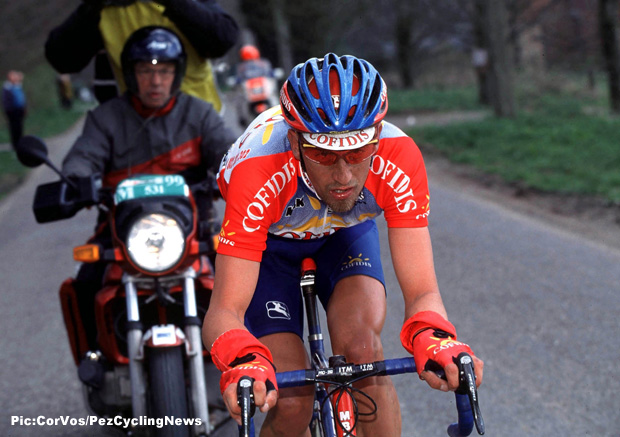 Danilo Di Luca (how that man disappointed me) was the last Italian victor in 2007 with Oscar Camenzind the last Suisse to the ‘do the biz’ back in 2001; unfortunately Oscar came from the same mould as Danilo – but as the teenagers say; ‘let’s not even go there!’ 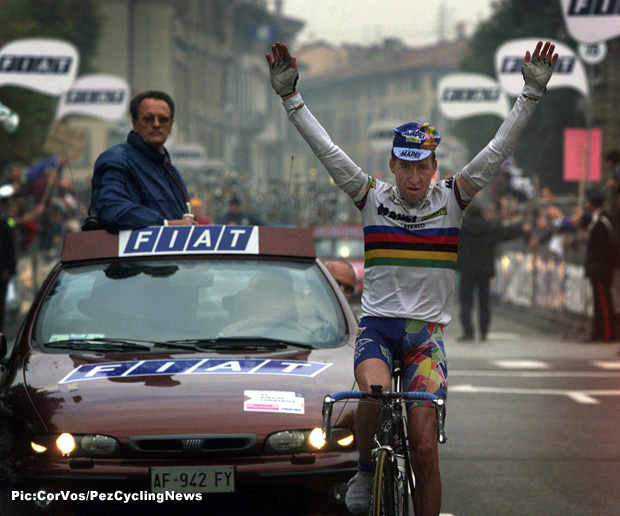 Camenzind also won a Lombardia and a Worlds

The fact that three of the ‘doubles’ were completed in the last few years says much about the changes in pro cycling. Merckx would charge through the early season from Milan – San Remo (which he won seven times) to the Amstel (which closed the Classics season back then and which the Belgian won twice) without missing a beat. In this millennium, such a thing would be out of the question as riders specialize in cobbled, sprinters’ or Ardennes Classics. 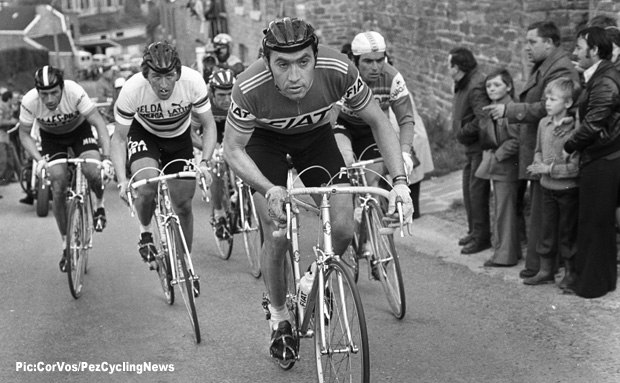 Who will win in 2015?
At the time of writing four previous winners will ‘face the time keepers’ as they say in English time trial parlance; let’s start with them albeit we went to press before the Fleche so don’t have the benefit of that last piece of the Ardennes form jigsaw puzzle:

Simon Gerrans (Orica-GreenEDGE & Australia) won in 2014 but his winter and spring were blighted with crashes and he’s still in recovery mode. The little Aussie should never be under rated but given that there’s a cadre of riders whose season is built around peaking for this race then perhaps we’re being optimistic expecting a result from the double monument winner. That said ‘@ 1:32’ in the Amstel isn’t exactly distant – but he’ll feel that endless grind to Ans more than most. 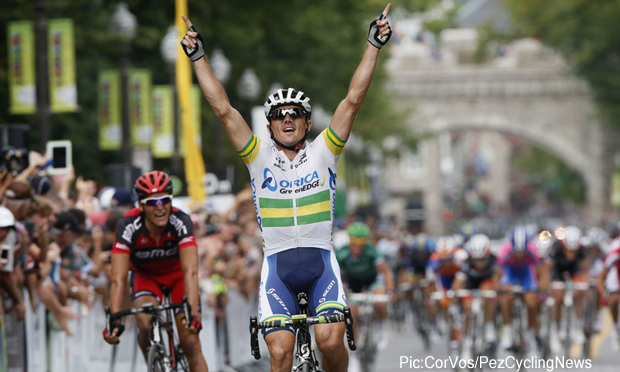 Too soon for Simon Gerrans?

Dan Martin (Cannondale-Garmin & Ireland): Was the 2013 winner and then fell in the finale last year when looking good for at the very least a podium place. In the game of poker that is the build up to the Ardennes races, Martin has been keeping them cards close to his chest – but two top four finishes in the Volta Ciclista a Catalunya backed up by his being with the ‘Bigs’ in the Amstel finale indicate that his form is where it should be. And the team need a big win – badly. 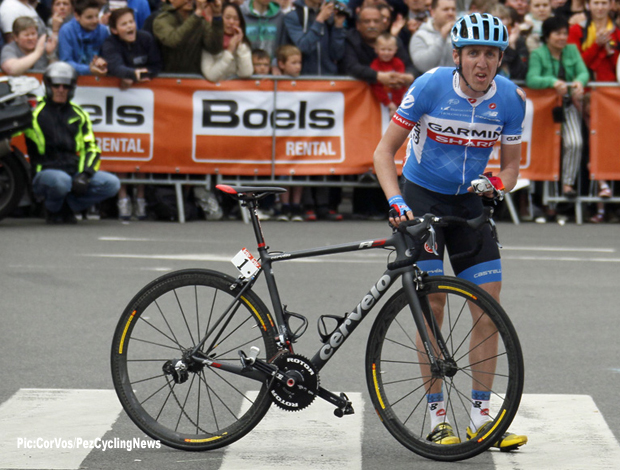 Philippe Gilbert (BMC Racing Team & Belgium): Took the honours in 2011 adding it to the Amstel and Fleche that year for a magnificent ‘treble.’ Gilbert seems like he’s where he wants to be with second place in the Brabantse Pijl; here’s the ‘but’ – his nitrous oxide dump on the Cauberg in Sunday’s Amstel didn’t get the gap which has taken him to three previous Amstel Golds and a rainbow jersey. But maybe that was just because Michael Matthews (Orica-GreenEDGE & Australia) who covered his move and took an eventual third place to Gilbert’s 10th is a ‘special one.’ 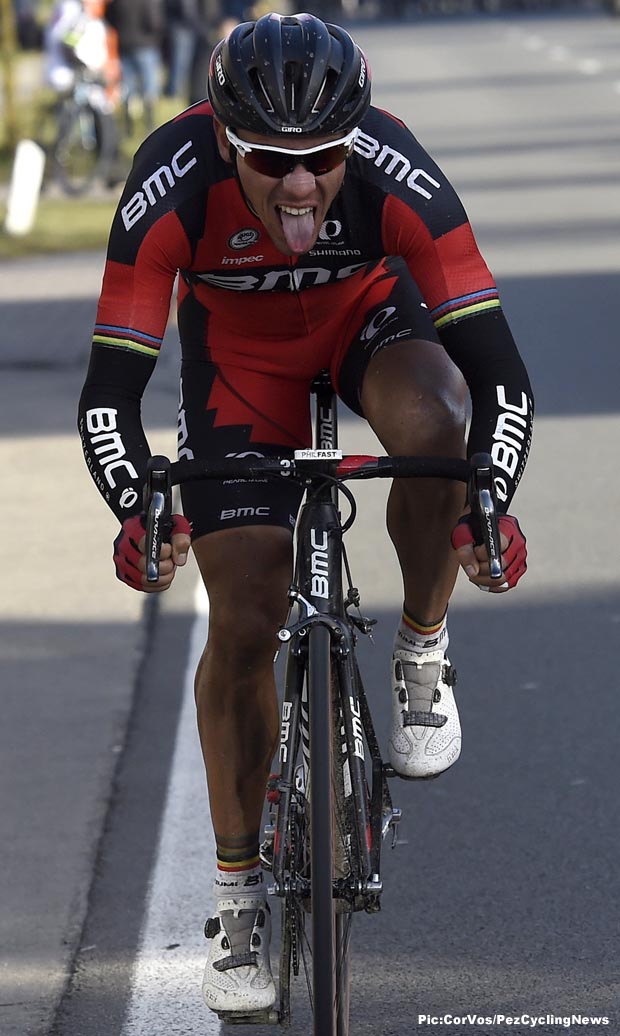 Alejandro Valverde (Movistar & Spain): is our fourth previous winner – a feat he’s realised twice, in 2006 and 2008, not to mention two second and one third place. These stats confirm that the roller coaster parcours is ideally suited to the man from Murcia – who, whatever you may think of him – won 10 races in the 2003 season with Kelme and last year was still capable of 11 wins. He’s won four times this season already and could do so again on Sunday – especially having taken an excellent second spot in the Amstel. 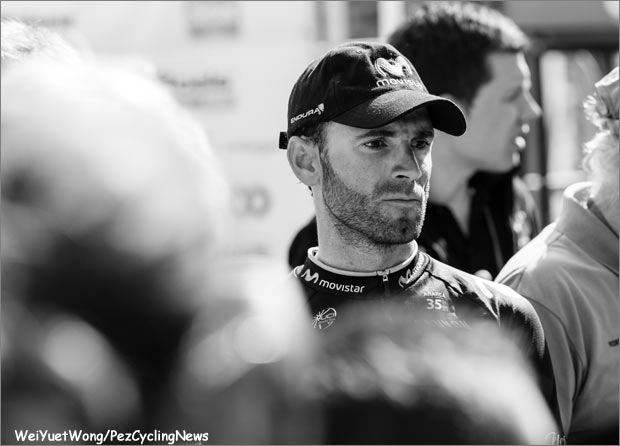 Can Valverde step up for his 3rd Liège win

Staying with the previous LBL performers theme, if we look at last year’s podium there’s Gerrans, Valverde (2nd) and – Michal Kwiatkowski (Etixx – Quick-Step & Poland) in third spot. Being a “man of the 70’s” I was used to seeing Big Ted winning Classics in the rainbow jersey and whilst it’s much less common these days it’s still a special and beautiful sight to witness. The distance, tough parcours and tough finish all play to the young Pole’s strengths – a podium for sure. 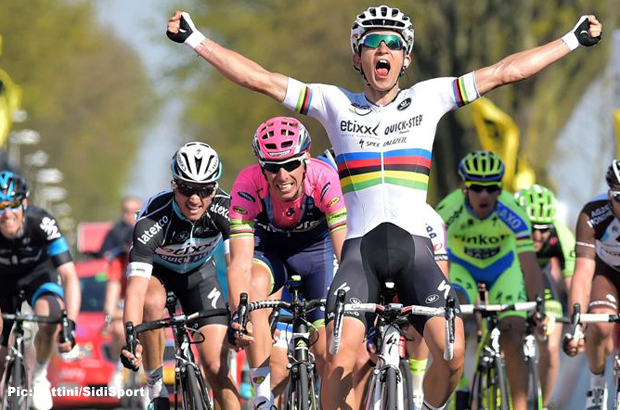 Two wins in a row for the World champion

Those five have to be considered the ‘super favourites’ but there are others. . .

Matthews’ Classic campaign finishes after the Fleche as he goes in to ‘Giro prep’ mould but the man who was fourth in the Amstel, Rui Costa (Lampre-Merida & Portugal) didn’t win the Worlds and three Tours des Suisse because he doesn’t know how to peak for the races which suit his strengths. 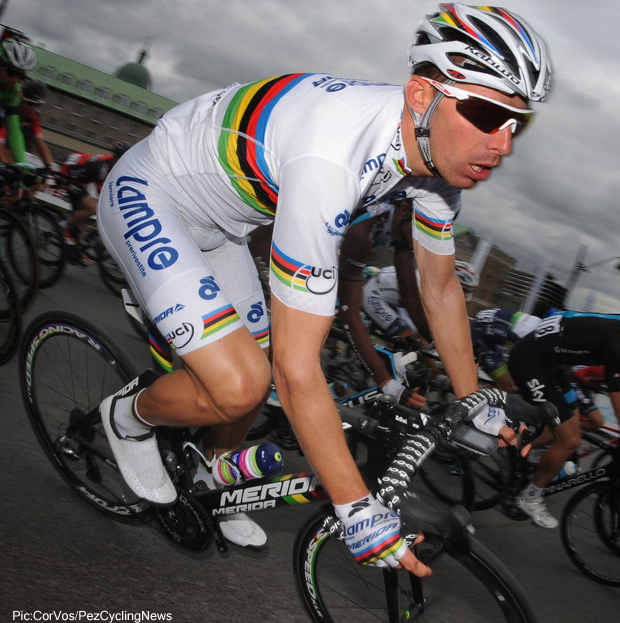 4th in Amstel for Rui Costa could be a good sign

And if you’re a student of the results columns you’ll have noticed that Pierre Rolland (Europcar & France) won the final stage and GC in the Vuelta a Castilla y Leon against strong Spanish and Portuguese opposition – that climb to Ans was made for a skinny man like him. . . 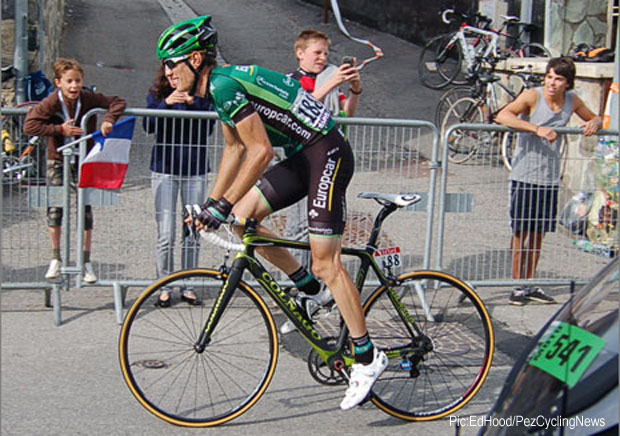 Tony Gallopin (Lotto Soudal) is another French ‘baroudeur’ who’s Cavalier style is to be commended; he was sixth in the Amstel – just a pity about that climb to Ans at the end. . . 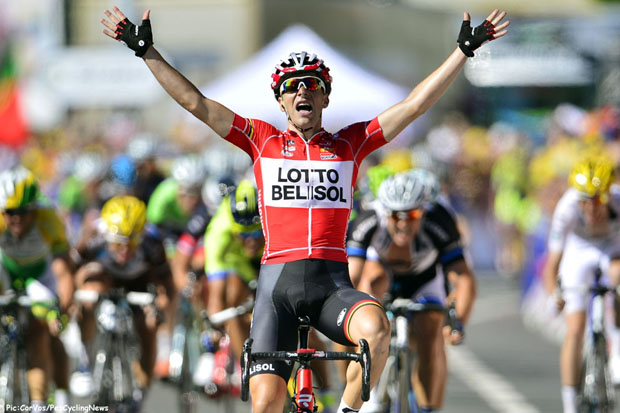 It’s about time Tony Gallopin got another big win

Domenico Pozzovivo (AG2R-La Mondiale & Italy) was fifth last year and with sixth in the Tour Down Under, eighth in Tirreno plus third and a stage win in Catalonia so far this season we don’t have to wonder about his condition. 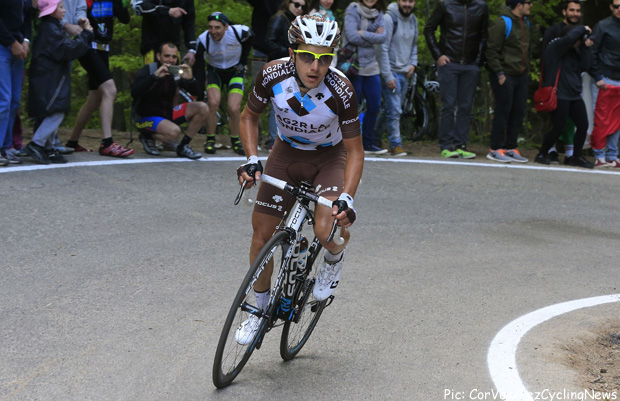 Is it steep enough for Domenico Pozzovivo

Tinkoff-Saxo’s season start hasn’t been disastrous as Old Oleg’s purge might suggest – but they do need a big win. Classy Czech Roman Kreuziger is who they’ll be looking too – he was in the elite group at the end on the Amstel and a podium is possible. 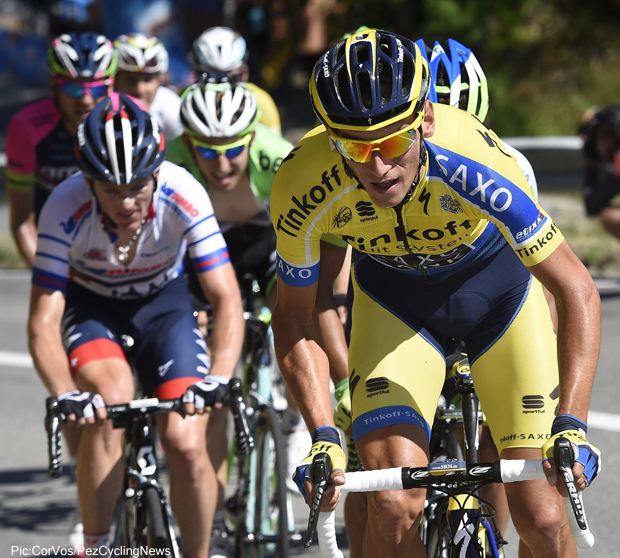 Could Kreuziger be the saviour of the Tinkoff-Saxo Team

Vincenzo Nibali (Astana & Italy) was, as we predicted, very visible – and strong – in the Fleche; this race suits him even more and whilst his major goal waits in France during the month of July no one sniffs at the chance to win a Monument. 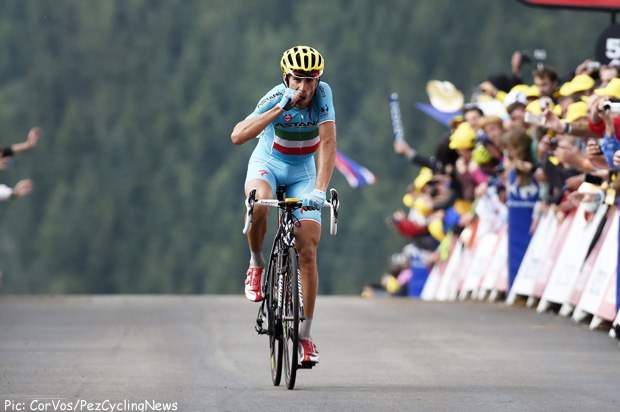 Maybe the others will work with Vincenzo this week?

No doubt there’ll be surprises but it would be a huge surprise if anyone other than whom we’ve nominated above wins this bike race. 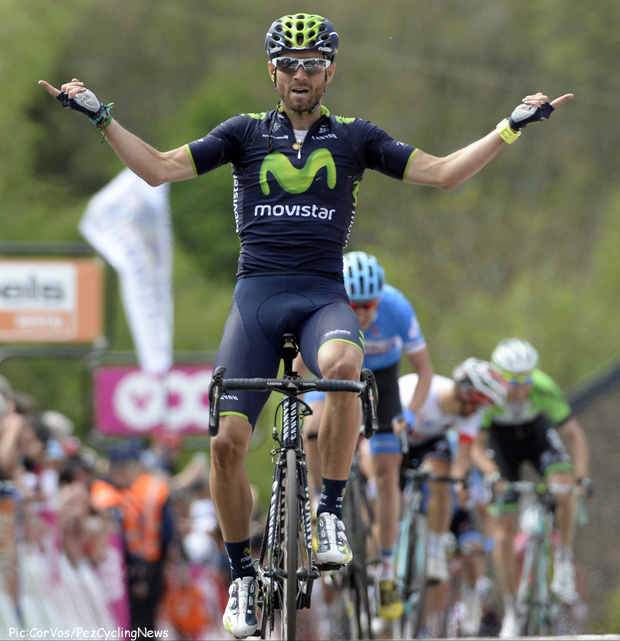 And in honour of a lady as distinguished as La Doyenne, let’s move up market away from beer for the race tipple and use Belgium’s answer to gin – Jenever. In a mixing glass with ice, combine two ounces of Jenever, a quarter-ounce of good maple syrup, and two big dashes of Angostura bitters. Stir all that up with ice, and then strain into a rocks glass over fresh ice. Garnish with a lemon and an orange peel, twisting both over the surface of the glass to release their citrus oils.

But wait until they’ve left Bastogne on the way back before you mix the first one – we don’t want you missing any of PEZ’s Doyenne race reportage, pictures or analysis. . .

Up to date team news in EuroTrash Thursday. 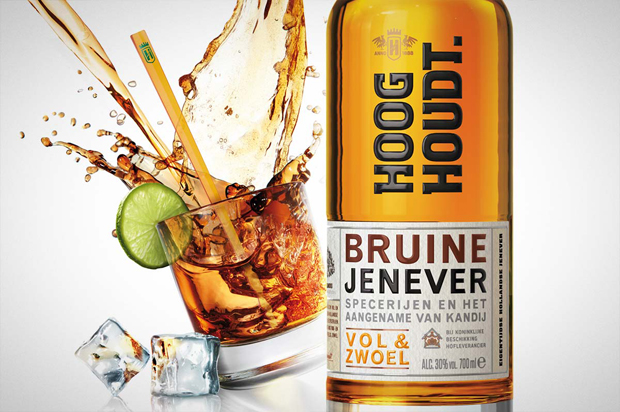