Roadside St.4: After yesterday’s recon of Stage 4 of the 2012 Giro reported here yesterday, it was time to get to the Real Thing and return to Verona for the team time trial, where we rode along with Team Astana…

A transformation had taken place overnight as the Giro, which was previously only represented by the pink signs marking the time trial course, had now taken over the city. Roads were blocked off everywhere, cheap souvenirs were being hocked and the masses were already flowing into the Piazza Bra, in front of the Arena. The whole of the Corso Porta Nuova was blocked off, with the centre lane on which the teams would return at maximum velocity featuring full-length barriers. The Piazza itself was already abuzz with activity, three hours before the launch of the first cyclists down the ramp in front of the Church of San Zeno. 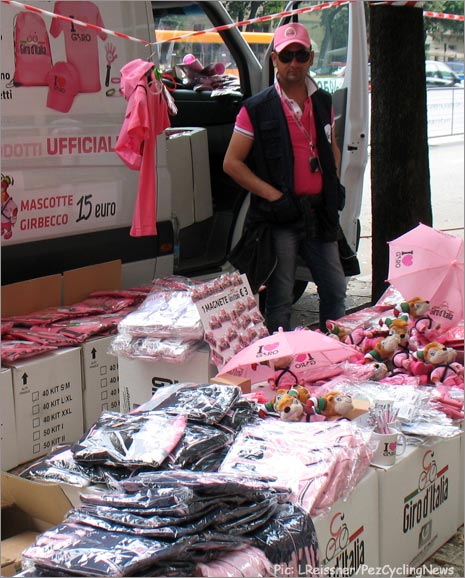 A rather lengthy walk took me to the large parking lot (not an item generally featured in old cities) where the team buses and cars had been located. The mechanics were busy everywhere, with not a pro cyclist in sight, although plenty of amateurs were there to salivate over the world’s best time trial bicycles. Most of them were neatly lined up on display, ready on training stands, immaculate. 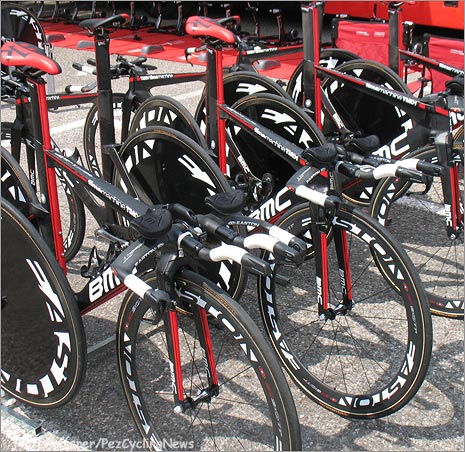 Stopping by the BMC location, there was the chance to chat with the mechanic, an Italian living in Thailand, about the life and times of those unsung heroes who make sure all the pieces stay on and the racers don’t need to fret over mechanical misadventures. He was thinking that prior to Taylor Phinney’s involvement in the Stage 3 crash near the finish line the BMC should have been considered among the favourites for today but now he thought Garmin-Barracuda might be tops. Phinney had not done the course recon with the rest of the team but his BMC time trial bike, with pink pinstriping, was ready to roll. 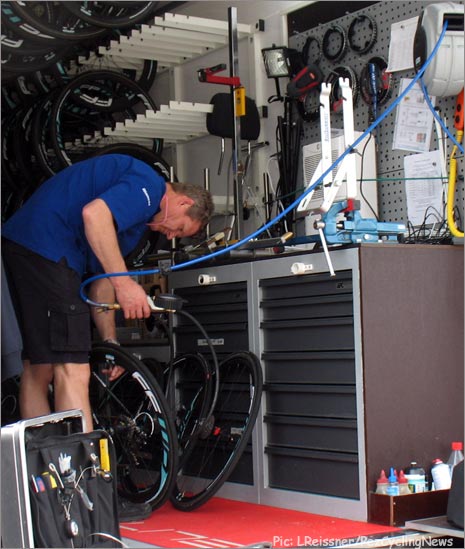 Walking among the buses, team cars and spectators was fun. Neutral wheel support was provided by the Italian Vittoria company, with a long tire-making tradition. In addition to its numerous cars, it had a display of its various bicycle tires and neatly lettered on the side of its bus were facts about all the kilometers ridden and particular races won on their tires. 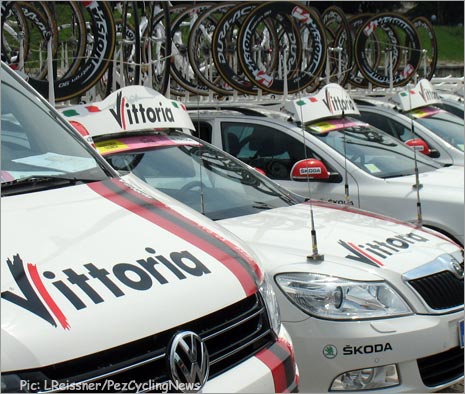 Team Sky occupied a strategically-chosen corner, designed to shield its riders from prying eyes and nosy spectators. The shiny black Jaguars attracted much positive comment but the net effect was Fortress Sky, rather than the much more open and positive image presented by most of the other teams. 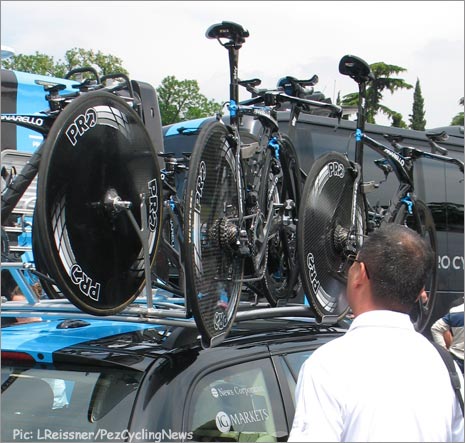 The Pez destination for today was Pro Team Astana’s big turquoise-and-yellow bus, surrounded by impressive numbers of Specialize Shiv time trial bikes. A conversation with Directeur Sportif Dmitri Sedoun, who has been with the team since its inception, revealed that today’s TTT stage was very important for the team. Astana is a team focused on the Grand Tours and, as recently demonstrated at Amstel Gold, the Classics. Its current iteration is not focused on sprinting or time trialling but he intended that his riders make the best of today’s race, noting it was difficult to win if it was not your speciality.

He said that in his view the course was not easy as it featured many curves and was not even extremely flat but he hoped his team, which included a number of new recruits, would work well together and take time from their competitors. Czech Roman Kreuzinger, the GC hope of the team at the Giro and a new addition this year from Liquigas, was relaxed before the race but he also said that he considered the course a difficult one. 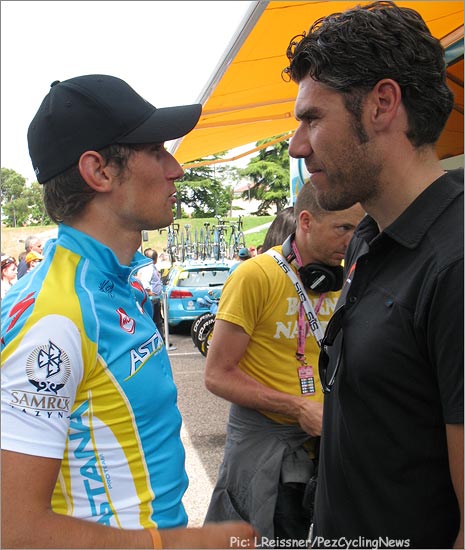 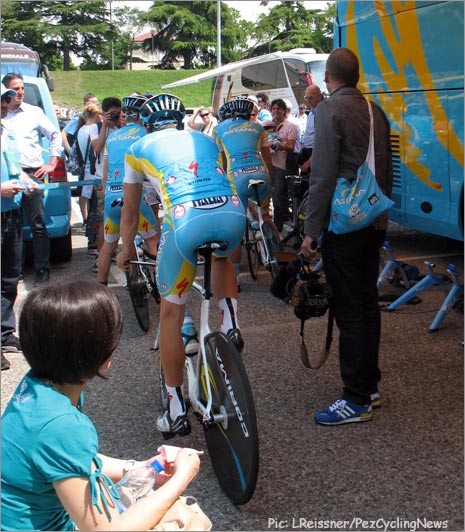 The team rode out for a 40 minute reconnaissance of the route, leaving an opportunity to chat with the team doctor and the Specialized team liaison, and after their return the racers changed their kit and soon were on the bikes again, riding the trainers in preparation for the 16:07 start. 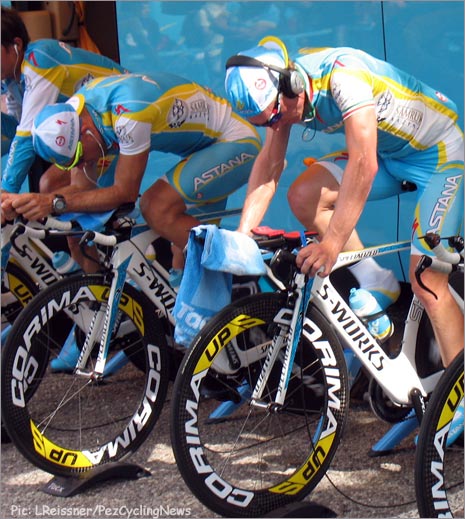 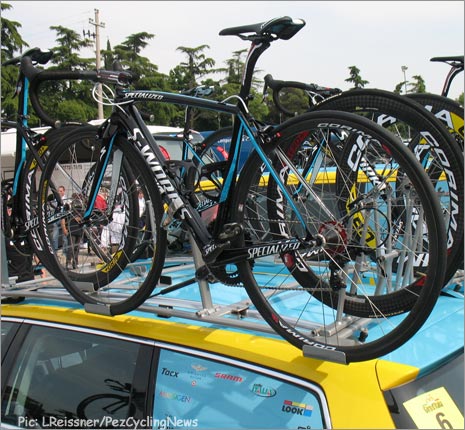 After half an hour or so the cars were ready to roll. Car No. 1 stays with the team while Car No. 2 is there to offer assistance to any of the riders who should fall back. While it is ideal to have the whole team of nine riders stay together and have enough horsepower to apply at the finish, this is not always the case as some riders cannot hold the pace for the whole distance. In the worst case, the team wants six riders in the final stretch in case there is an accident or mechanical problem affecting one as the fifth rider in is the one counted for the team time. 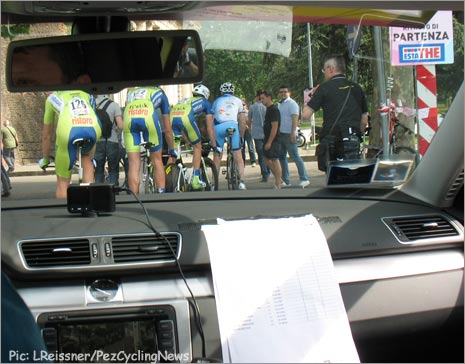 Here’s the view from inside Astana team car #2.

We drove off to the start, the pros riding easily through the cars jammed into Verona’s narrow streets. The Pro Team Astana riders turned off to the right up to the starting ramp and were introduced as we waited on a side street. A few moments later, precisely on time, the team came rocketing down the street behind a police motorcycle. Car No. 1 followed immediately and we accelerated in Car No. 2 as well, joined by two motorcycles. We were going very very fast right away. 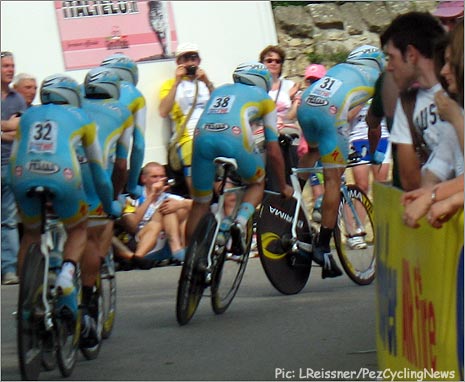 It was an odd sensation to see the team up ahead, driving forward at normal car speeds, on the road we had only ridden yesterday. The atmosphere in the car was focused on the task at hand and the radio was blaring split times in at least three languages and television coverage was shown on the navigation screen. 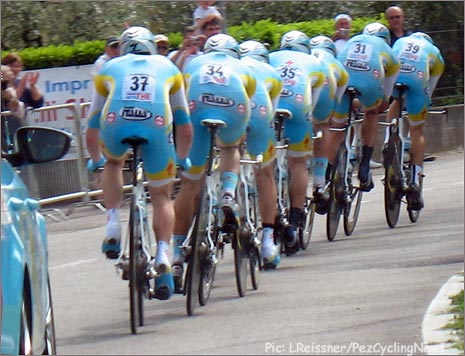 Occasionally teams would come along the road in the other direction, returning to Verona, but with a closing speed of nearly 120 km/h, no photos could be taken for Pez readers!

Soon we came to the first time check (we were going around 56 km/h to this point) and then the right hand turn. As we began to climb and passed through a small tunnel, Andrey Zeits, Kazakh rider with the team, came off the back. He did not look like he was struggling much but the rest of the team just rode away. We stayed with him for a while through the climb up most of the way to Castelrotto and then accelerated and chased back up to Car No. 1. By “acceleration” this meant driving around 75 km/h on roads where 40 or so is the normal. The descent down from Castelrotto was therefore quite exciting. 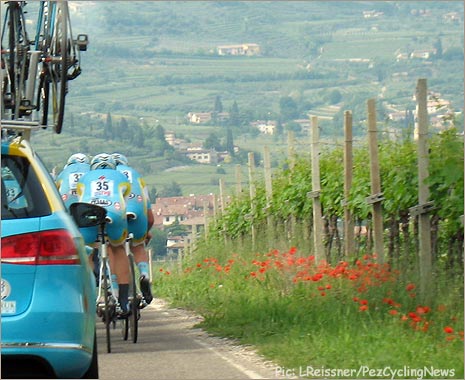 The team seemed to be performing very well and the split times must have been encouraging as we soon found ourselves rocketing along the Adige again and nearing the city limits. After crossing a bridge, the DS pulled the car off the road and we waited. Two teams passed, along with a few orphaned riders as we waited, but soon enough Zeits was back in sight and after he passed us we drove the last stretch up the Corso Porta Nuova with him. 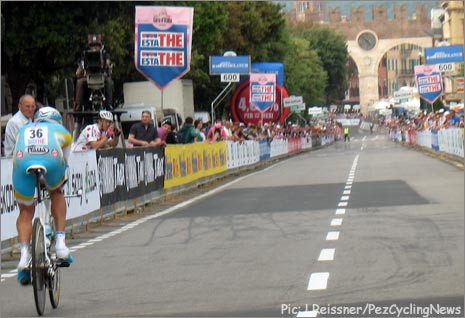 The team car has to pull off before the finish line and as we turned some officials had a conversation with the DS, suggesting perhaps that he had driven too quickly up the final stretch but after some handwaving and a bit of shouting we continued on.

On leaving the car, we learned that Pro Team Astana had had an excellent result, standing in second place at that point. Although Garmin-Barracuda went on to win in the end, it was a good performance by a team with a serious intent for the overall win in two and a half weeks.

Leaving the parking lot and returning to the Piazza Bra, we discovered everything Giro-related fast disappearing as the barriers were already half-removed, the souvenir stands closing and the lights turned off in Fairyland Verona for this Giro. But tomorrow the circus moves on to Modena! 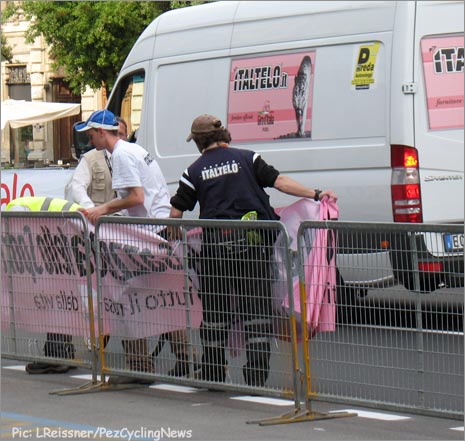 • When not standing on tiptoes to peer into the Team Sky bus, Leslie Reissner may be found with a soothing coffee at www.tindonkey.com.