Saturday’s stage 14 of the 2018 Giro d’Italia smacks riders square in the gob with a slobber-inspiring summit finish on the brutally steep Monte Zoncolan.  Many would say its first appearance in 2003 should have been the last, but it does make for some decent suffering to set up the final week of the race.

I sought it out with vigor back in 2007 and clammered my way to the top over the course of a couple hours.  I even stopped at one point to seek refuge on a tree stump – unable to breathe or continue until my heart and lungs agreed to play nice again. 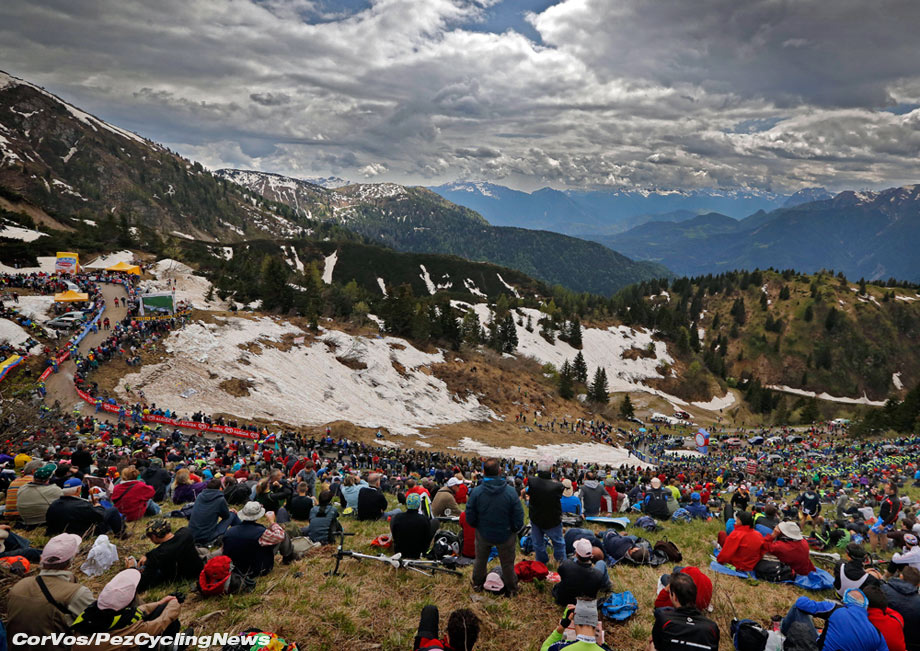 A quick review of the stats should be enough to confirm that this is a once in a lifetime ride: a 1220 meter gain in just 10km –  that’s an average over 12% with pitches to 22%.  Ouch.  What’s even worse is that most of the climb is in wooded forest, so forget about seeing anything beyond the trees to distract you, and once you make into the final 2km, the views are kind of a let down – at least when compared to what else is on offer around Italy.

“Epic is the only word to describe the ride to, up, and back from Monte Zoncolan. It’s the toughest climb I’ve done, and has yet again raised my admiration for the pros who race up stuff like this. Here’s what it’s like for the rest of us.”

Back in ’07 the new ‘toughest climb’ in Italy – and maybe Europe – was the feared Zoncolan. My cunning plan was to tackle the monster myself – best to feel it with my own legs. 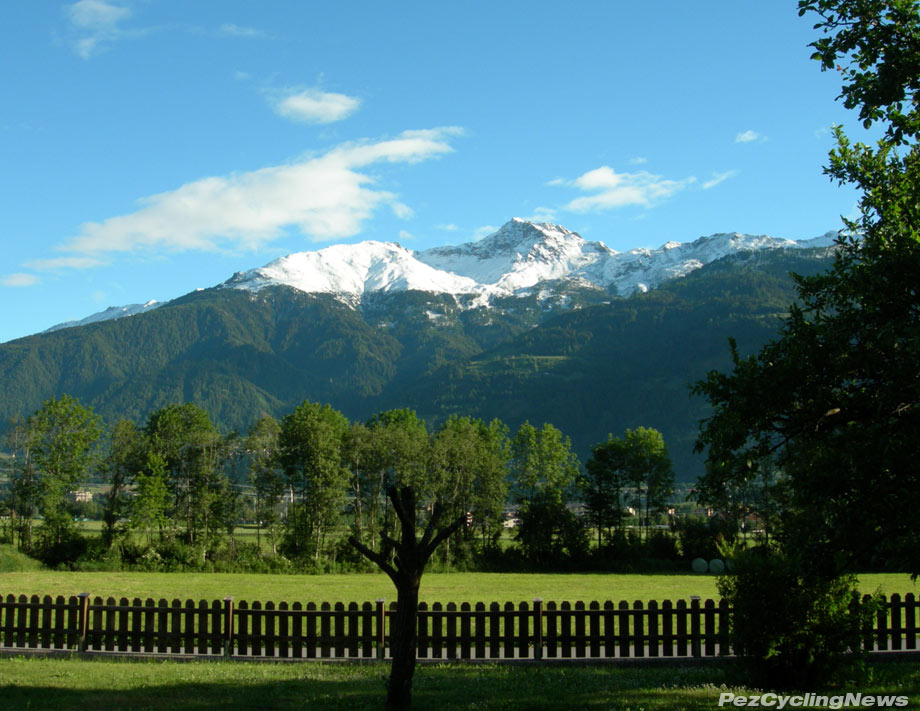 At last the sun arrived as I pulled out of Austria.

My day started early – on the road at 8:30 leaving Lienz and making my way to Tolmezzo, southeast of the Zoncolan and my planned loop. I admit I was a little nervous about what lay ahead. I climbed the Mortirolo last year, and that sucker hurt… a lot… so I knew this would be bad. But how much mo’ bad? 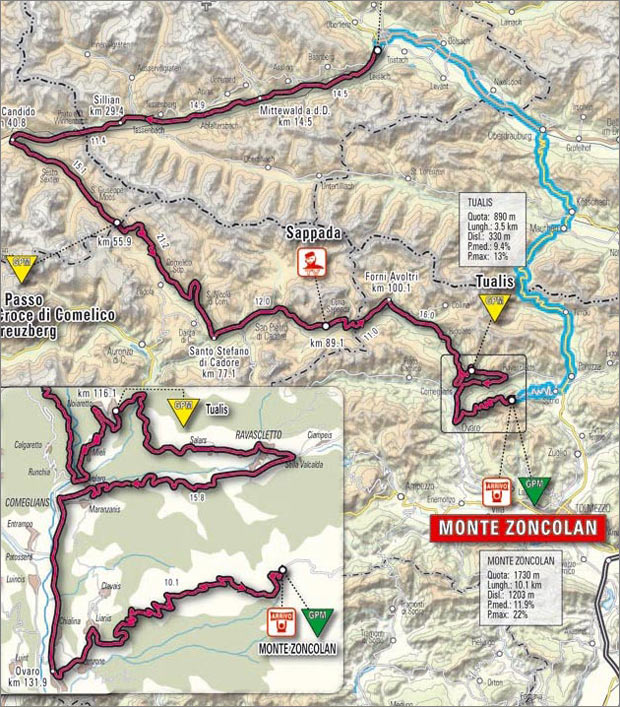 As always, things run about an hour behind when you think they should, so It was just before 11:00 that I pulled out of Tolmezzo for my date with destiny on the Zoncolan. It wasn’t long before I hooked up with a constant stream of riders and fans making their way to the foot of the Zoncolan in Ovaro, but instead of turning straight up the 10km climb like everyone else, I wanted to ride the 20km loop over the smaller climb to Tualis before taking on the day’s main attraction. 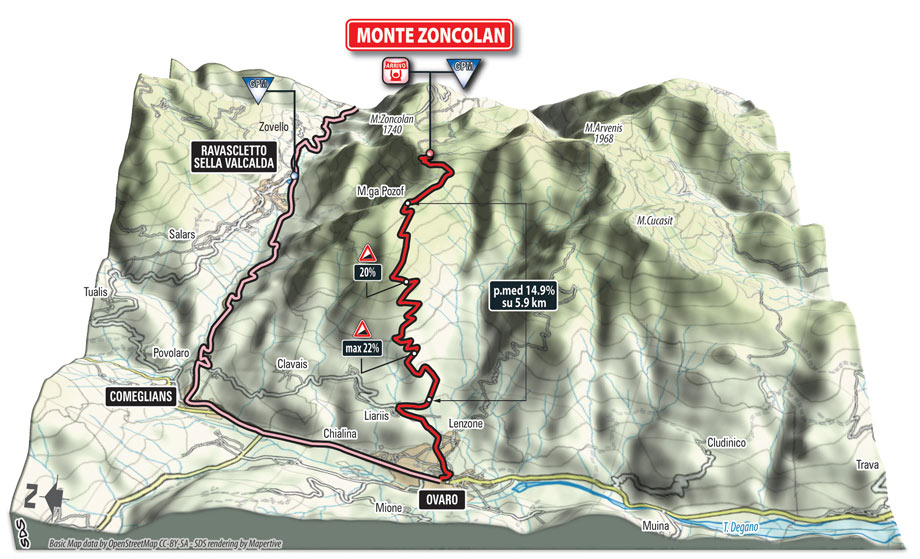 As I rode out the other side of Ovaro, where the Zoncolan starts, I found myself alone – everyone else was thinking only “Zoncolan”! 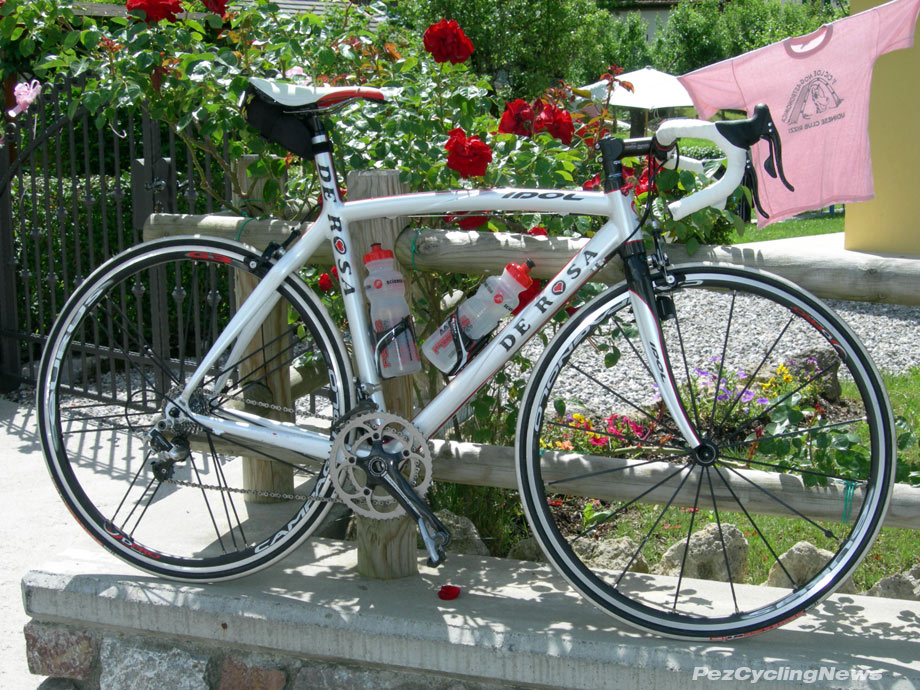 My ride for today – De Rosa’s Idol. The village streets on the climb to Tualis were lined with flowers in full bloom… seemed like the perfect setting for a pic. 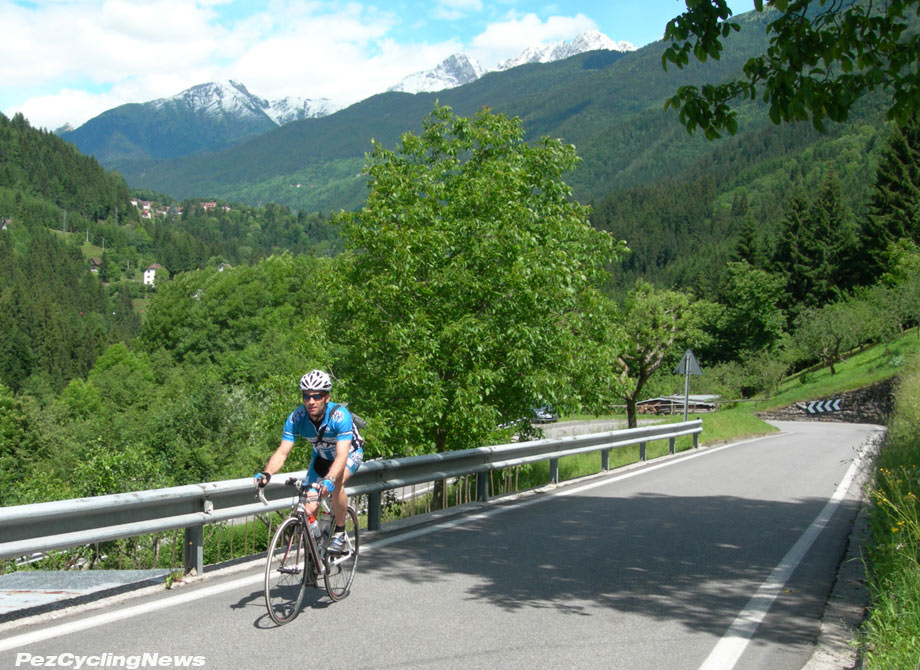 The first climb to Tualis makes a pretty good warm-up. The slopes average 9% with a max of 13%, but the twisting climb through scenic villages keeps your mind occupied. 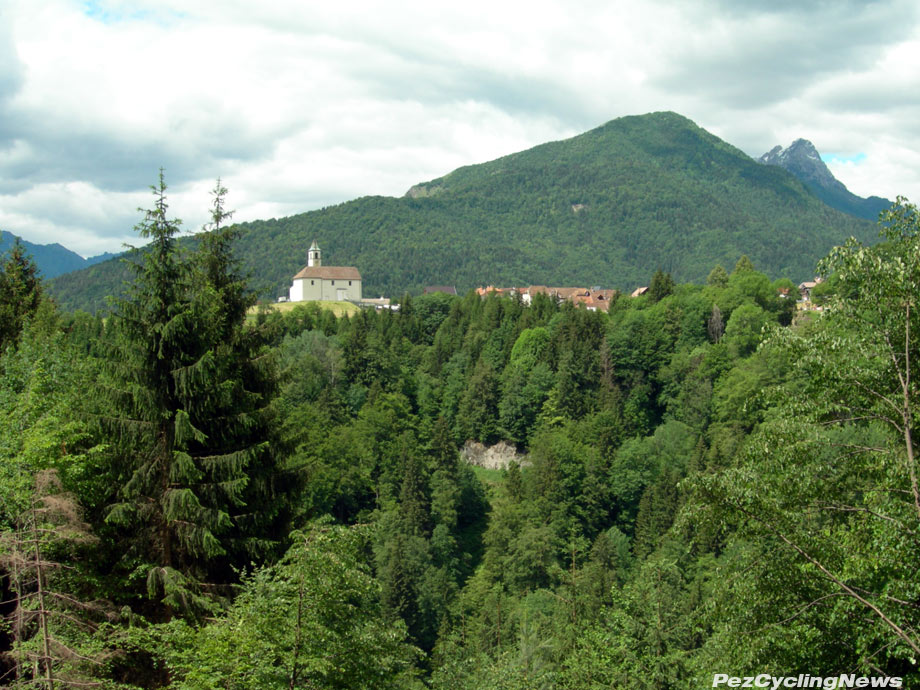 Although the main part of the climb finishes in Tualis, it actually drags up another 100m over the next 2.5km – one of those climbs that makes you wonder where the ‘real’ summit is.

Somewhere just past Tulais, another lone rider came past at a pretty good clip.  I’m no racer, but I’m fit enough to usually be the guy who’s doing the passing. So even though this guy was going pretty fast, I jumped on his wheel if for nothing more than to break my solitary confinement. 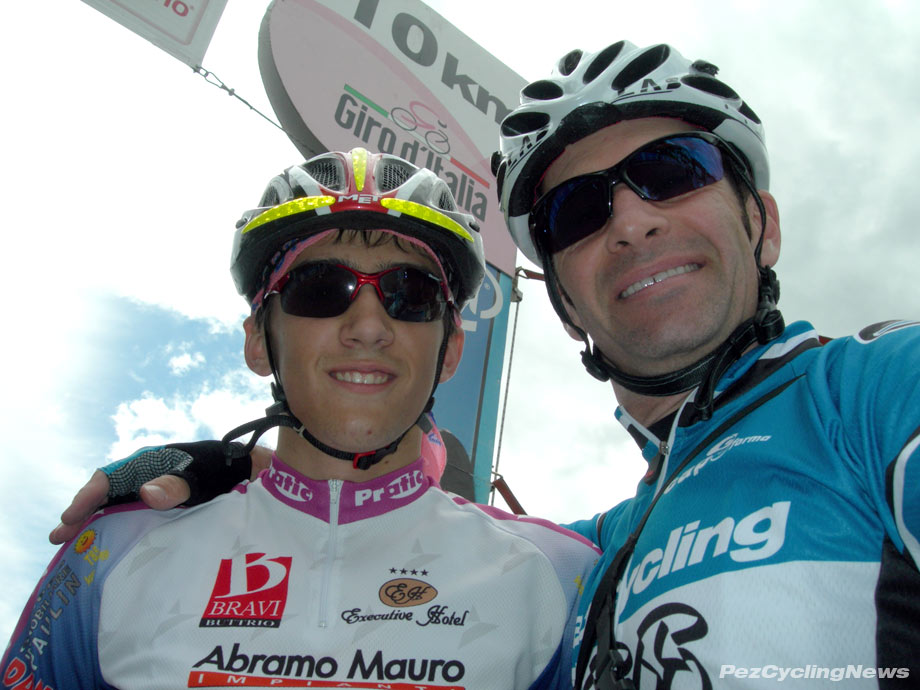 I thanked Alessandro for his company beneath the start of the final 10km. Apparently his ‘program’ for the day did not include tackling the Zoncolan with a 39t chainring.

Turns out Alessandro is a junior racer – just 16 years old – and he was pushing it pretty good. I decided my accomplice would also become my unwitting gregario as I sat in and let him do the work. (Like my dad used to say – hard work is the best teacher.) Sure I took a few turns – but only a few ceremonial pulls as a reminder to Ale to respect his elders. But it was on the fast descent back to Ovaro where his youthful vigor came to the fore. He took off like a maniac – or at least a young guy with no family, job, or reason to remain in one piece. I of course, chased like a maniac, in the interest of pushing the De Rosa on the fast switchbacks. 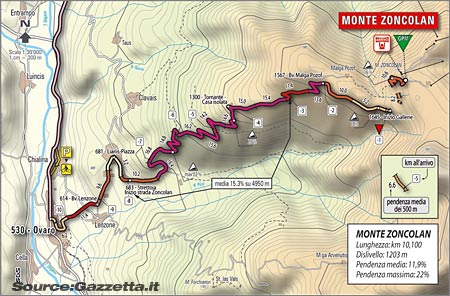 ONTO THE ZONCOLAN
An hour after I passed Ovaro I was sufficiently warmed up and ready to start the climb. It was 1:00PM and the roadway was full of cyclists and fans walking up – in fact there were far more pedestrians than cyclists – no wonder why. 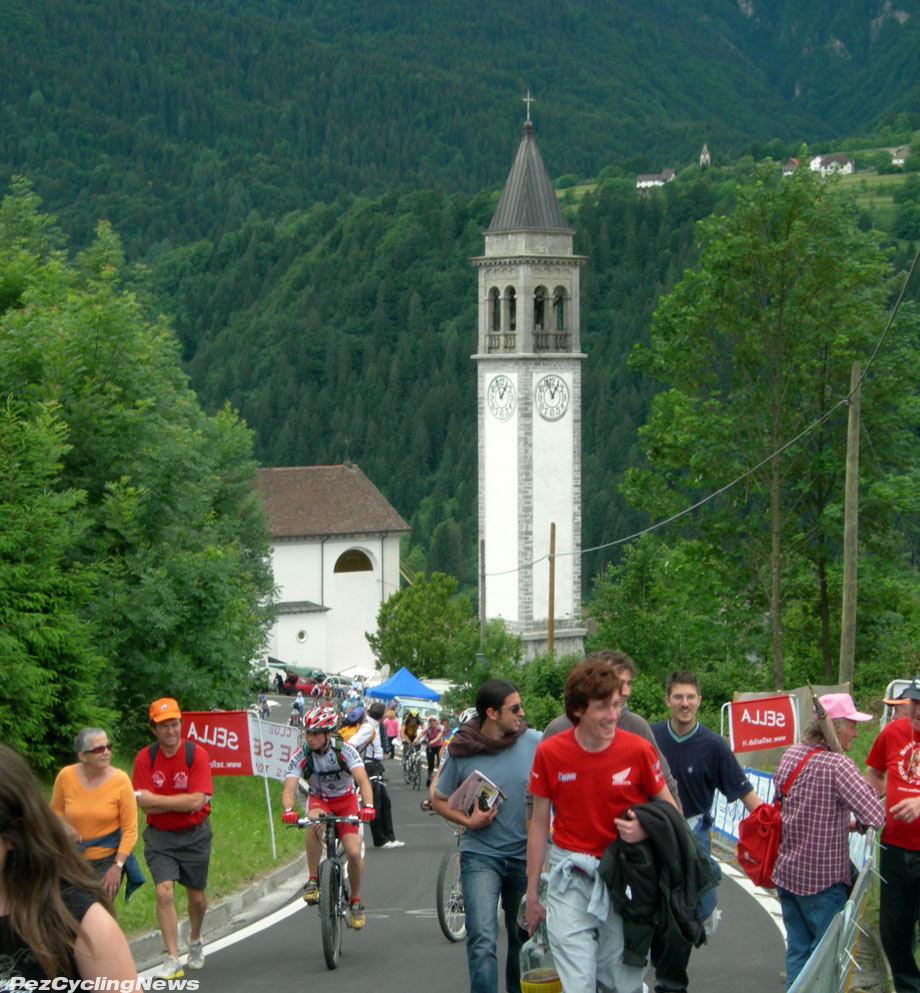 The first 2km are not bad – it hits 11% for a short spell in there, but I had already settled into my 34×25 and had no illusions of pushing any harder then than needed.

It’s when you reach km 3 that you know you’re not in Kansas anymore. Rounding the turn out of the flat section through Liariis-Piazza, the road rears up at a frightening 16% – it’s right in your face and climbs straight through the forest. “Damn right we’re not in Kansas anymore” – I thought as the smirk disappeared from my face.

The next 5km average 15.3% grade – even the switchbacks are steep. Here you hit the first 20% – and it hurts. A lot. By now you’ve been working as hard as you can just to keep the forward momentum. If you stop pedaling you go backwards. This can be especially tricky when the legs have suddenly acquired a certain jelly-like consistency, which only becomes apparent when trying to unclip and actually put a foot down. I saw more than a few riders just fall over. 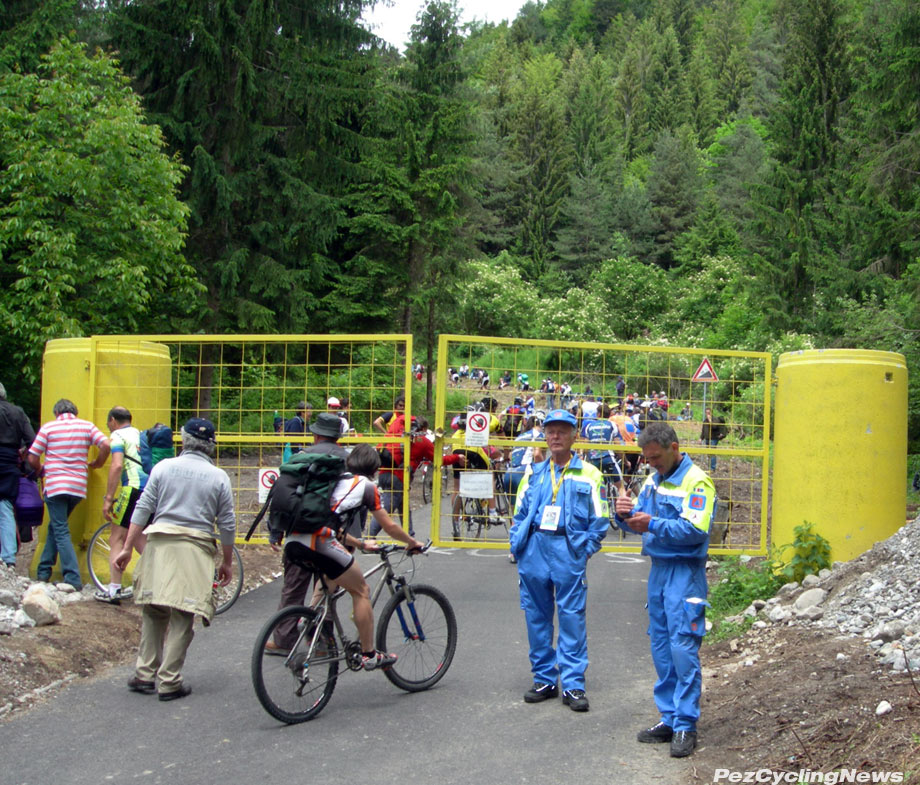 The organizers blocked the road to cyclists at several points on the mountain, allowing only foot traffic to proceed past certain points. Luckily I had my press pass along for just such a need, but I had to present it about 30 times as the local volunteers just aren’t used to seeing a ‘giornalista’ in full kit actually pedaling a bike. 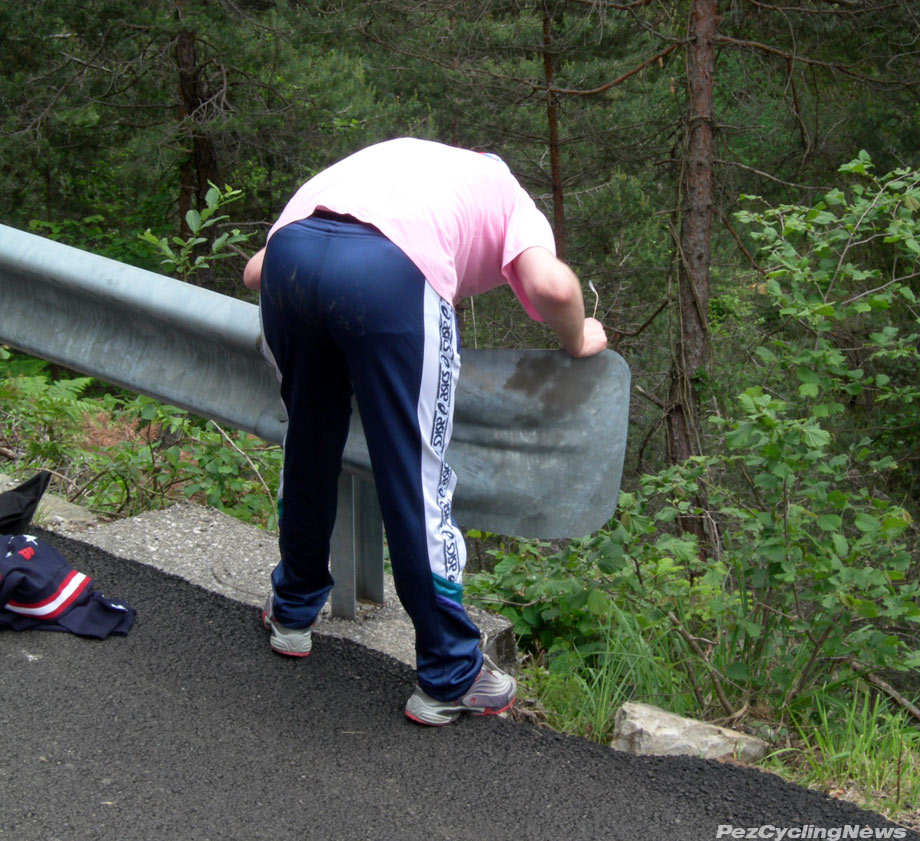 Actual proof that the Zoncolan can make you woof your cookies – and this guy wasn’t even riding. 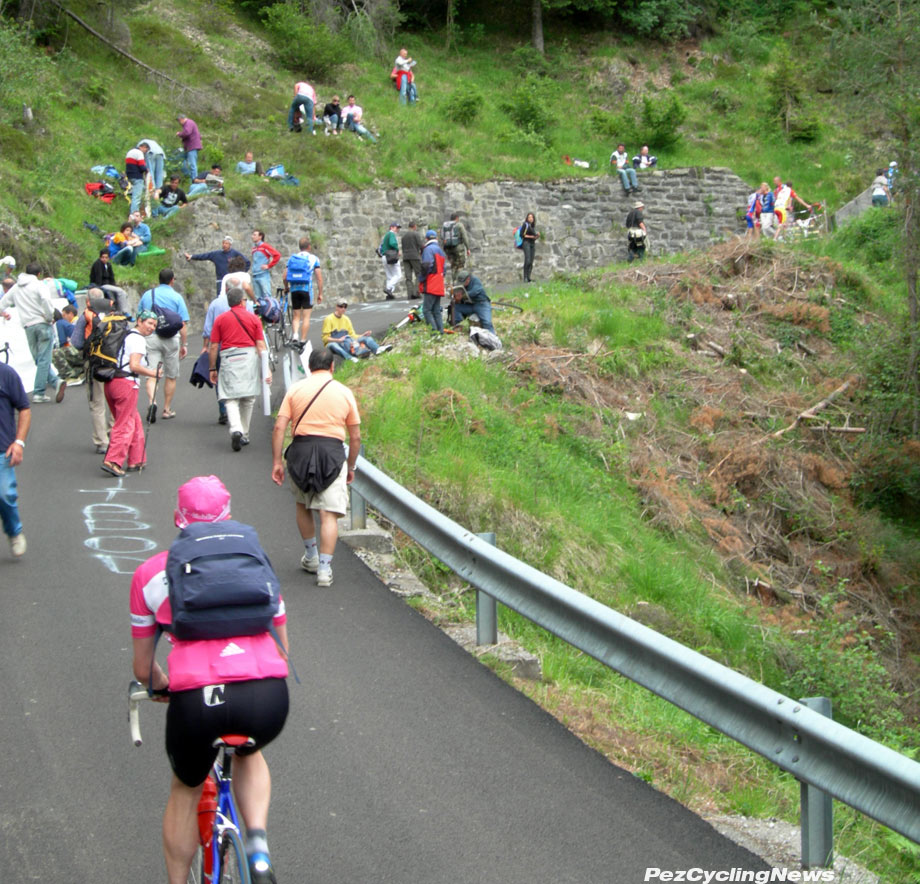 Into the worst of it and now way out. The unrelenting grade from km’s 3 – 8 took on a life of its own, with an estimated 100,000+ people all suffering in their own ways. 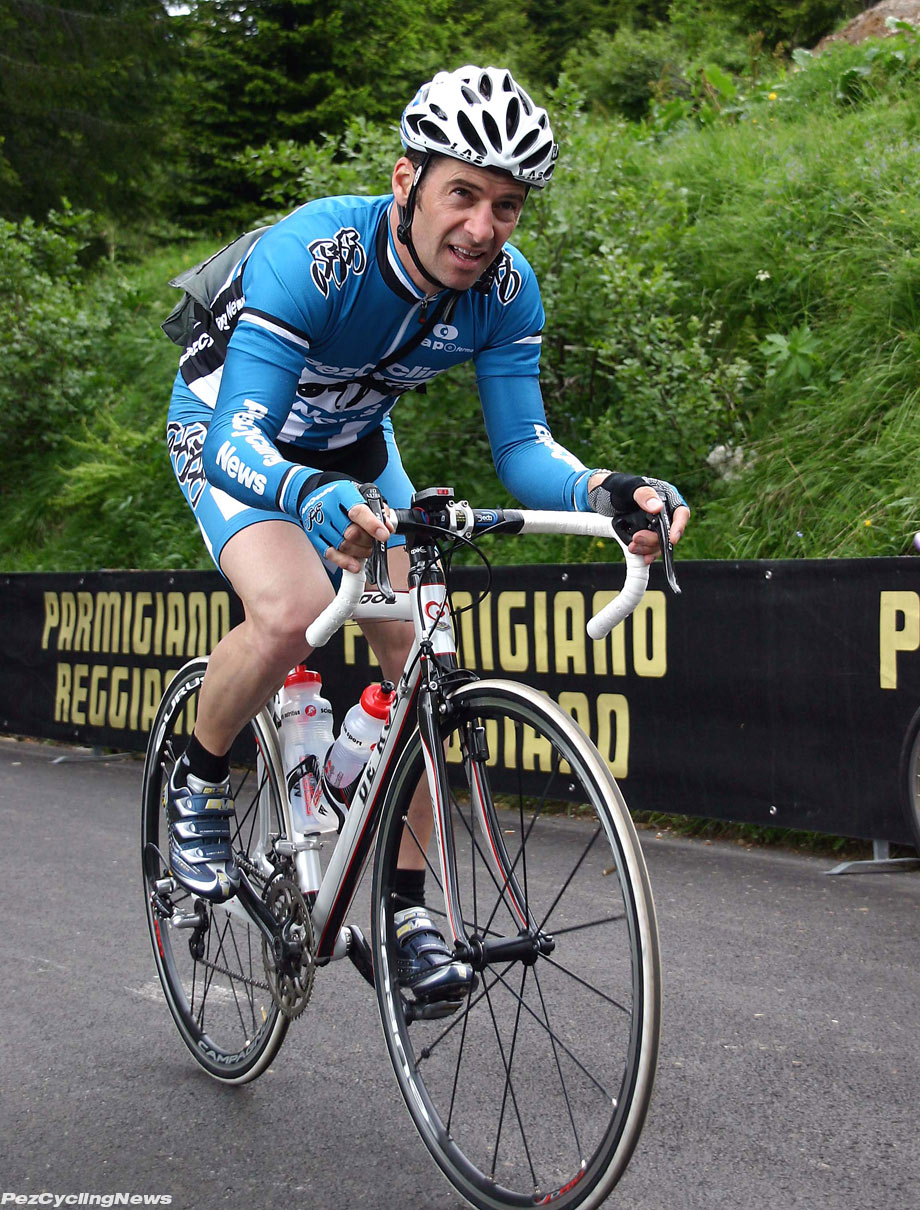 The worst section by far was from kms 6-8 – it’s 2kms at around 14%, but by here you’re so wasted that curling up and crying actually seems like a decent option. There is no shame in pushing your bike here – only suffering. 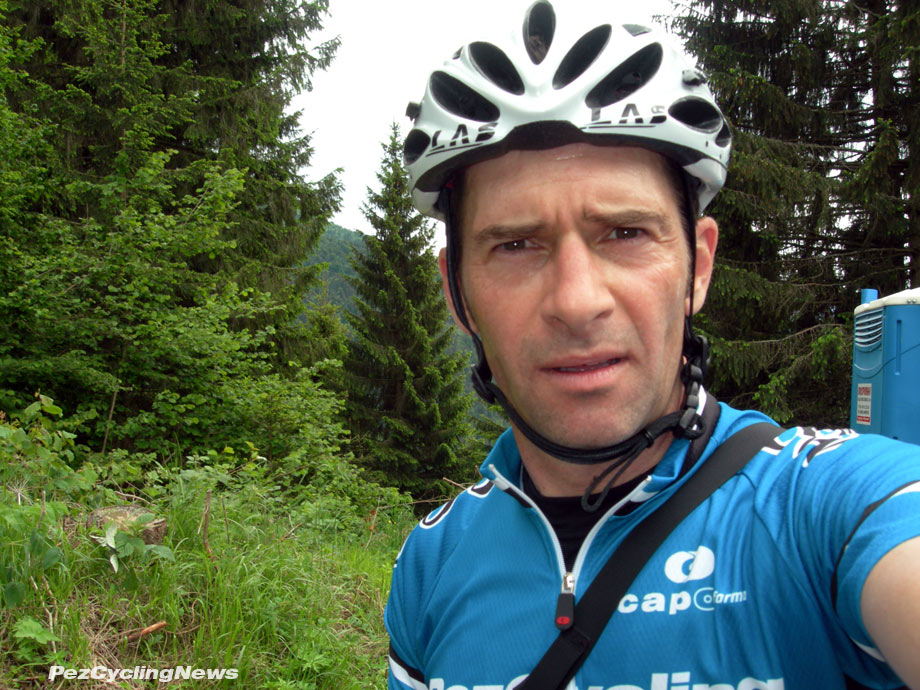 You will ask yourself: “what the hell was I thinking?” 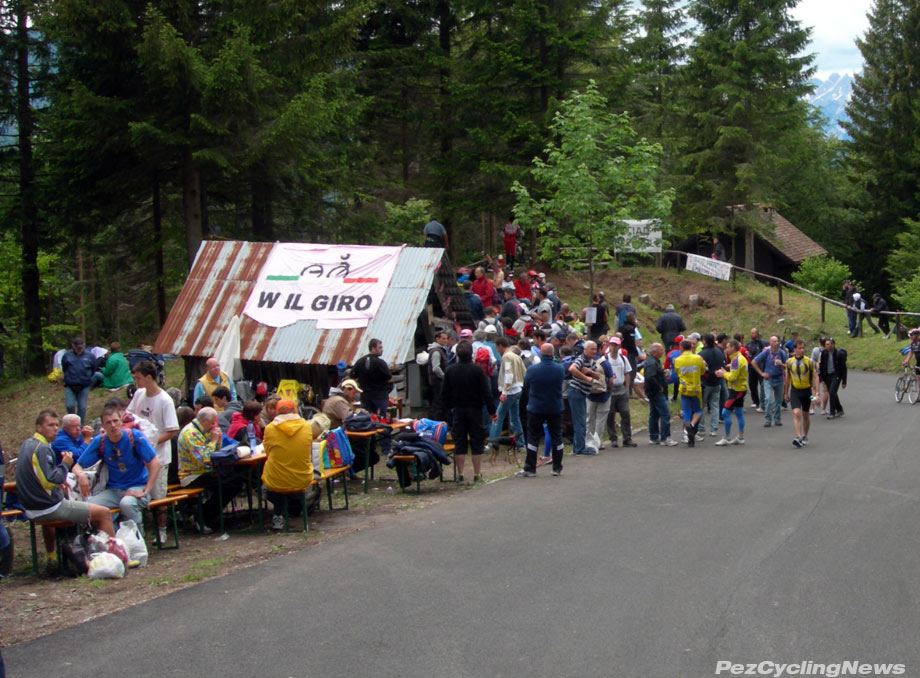 Sausages on the barbie never smelled so good. 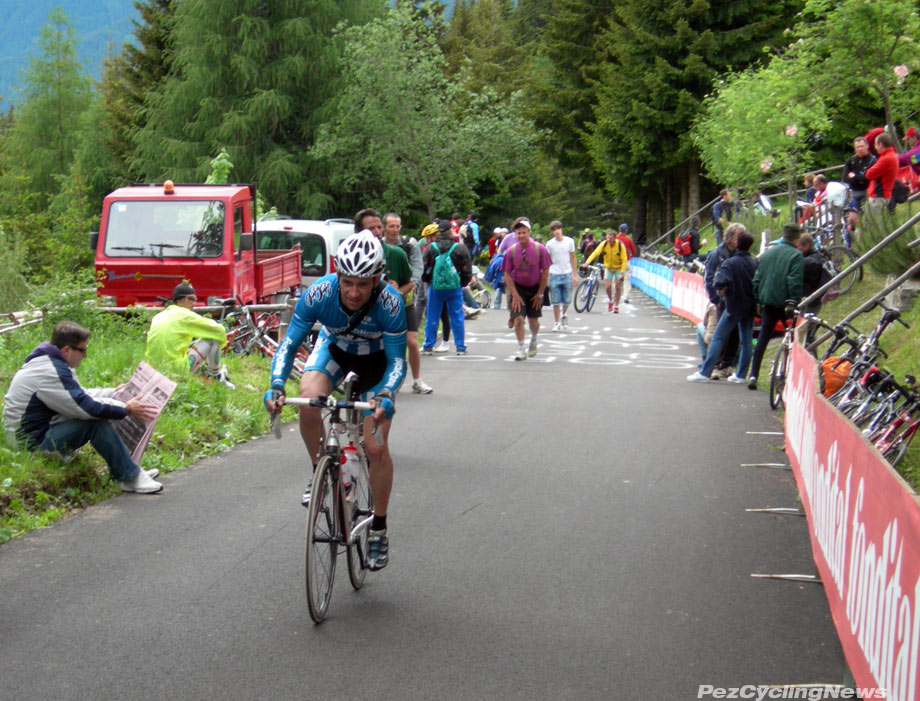 Somewhere around km 7, I simply resigned to my suffering. Most of the riders I saw here were on their way down. 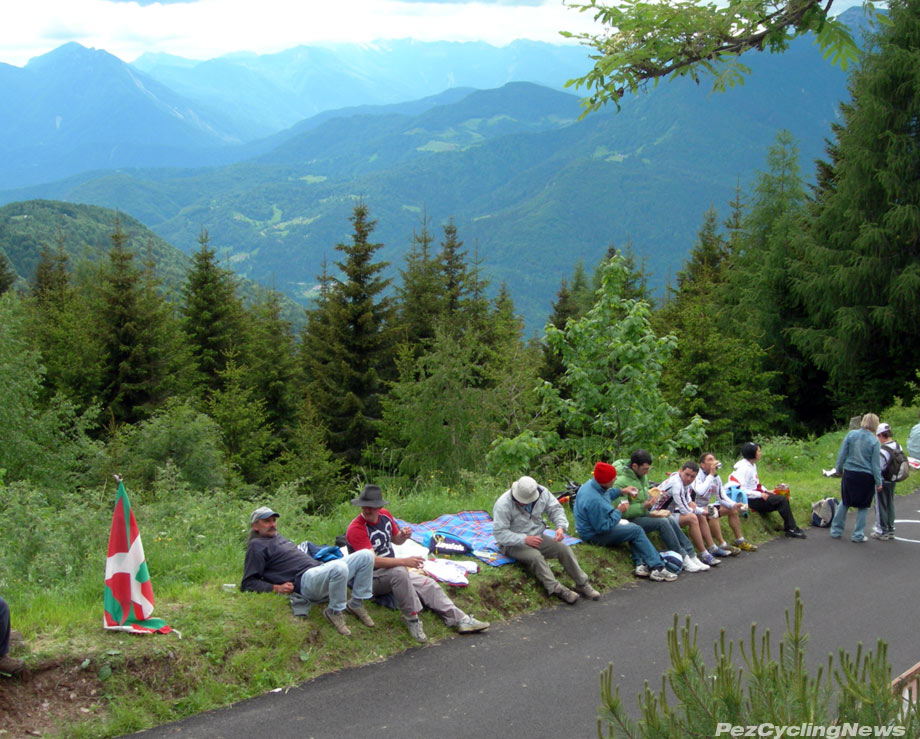 Adding to the misery is the fact that not until you reach the higher levels do you finally get a view – and you realize how far you’ve come. 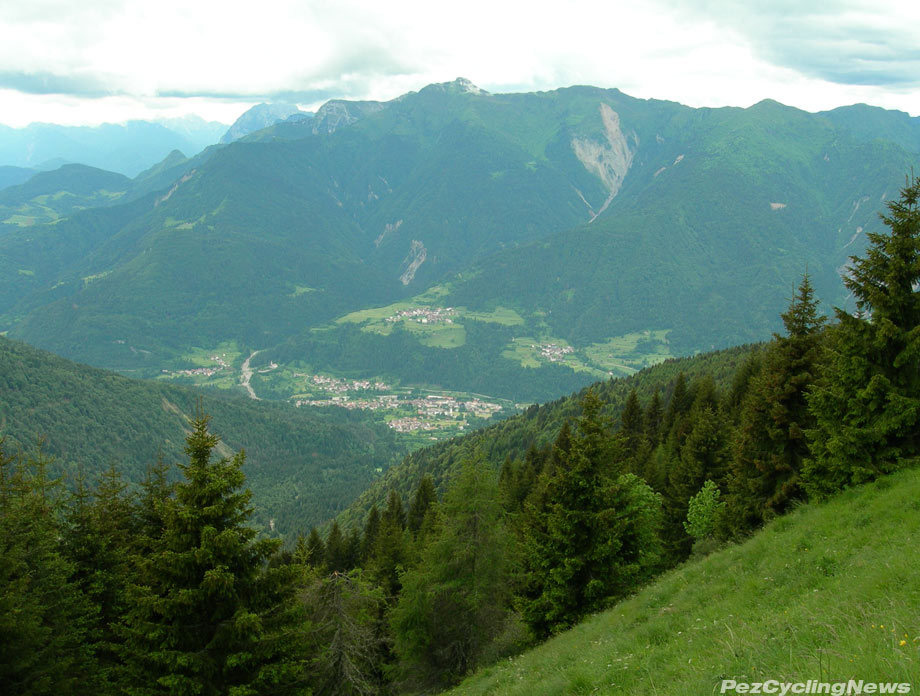 That’s Ovaro in the valley… remember where we started? 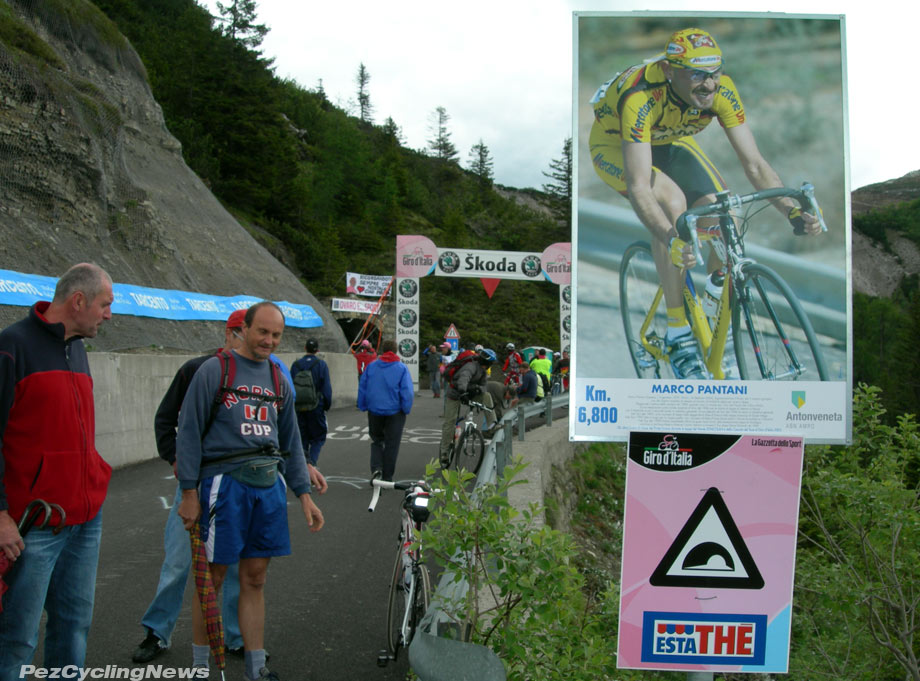 I emerged from km 8 in a daze, and all of a sudden I’m at 1300 meters to go. There are three narrow, lit tunnels that take you to the 500m to go mark, and the final kms are marked by signposts of famous riders. 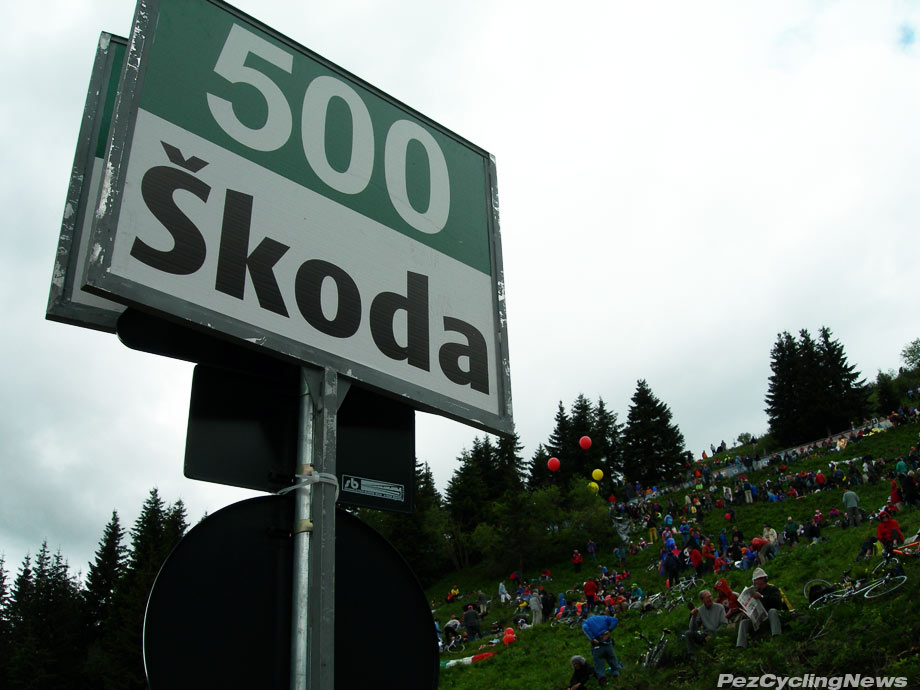 Am I hallucinating… can this be true? 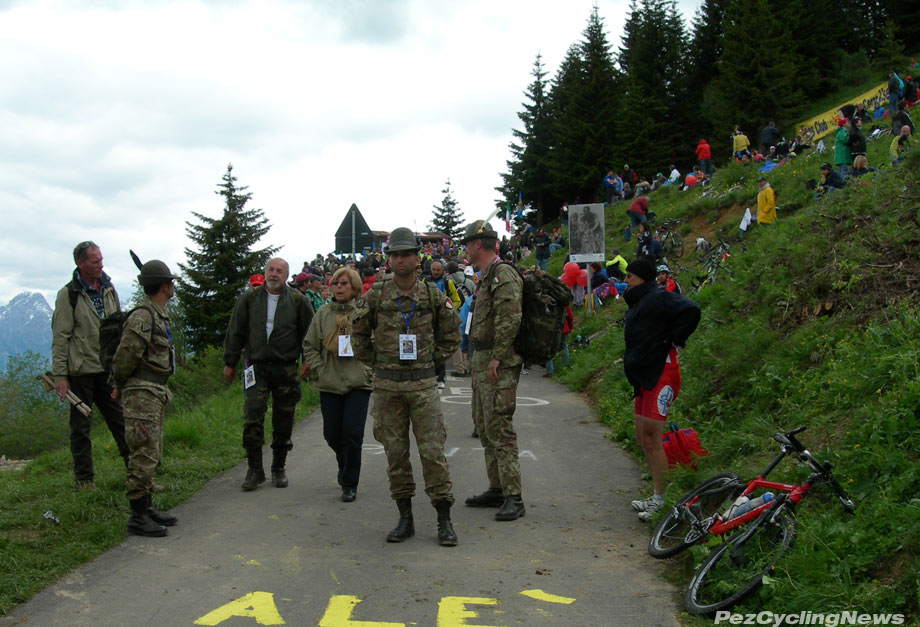 These guys had security covered inside the last 500 meters – ‘no bikes allowed’! I’d hoped to go 3 for 3 at riding alone inside the final barriers to the summit – to go along with my exploits at La Tenda in ’05 and Mt. Bondone last year – but not today. In spite of the feathered caps – they kept the crowd under control, and even formed a human chain a couple hundred meters below the barriers to protect the riders. 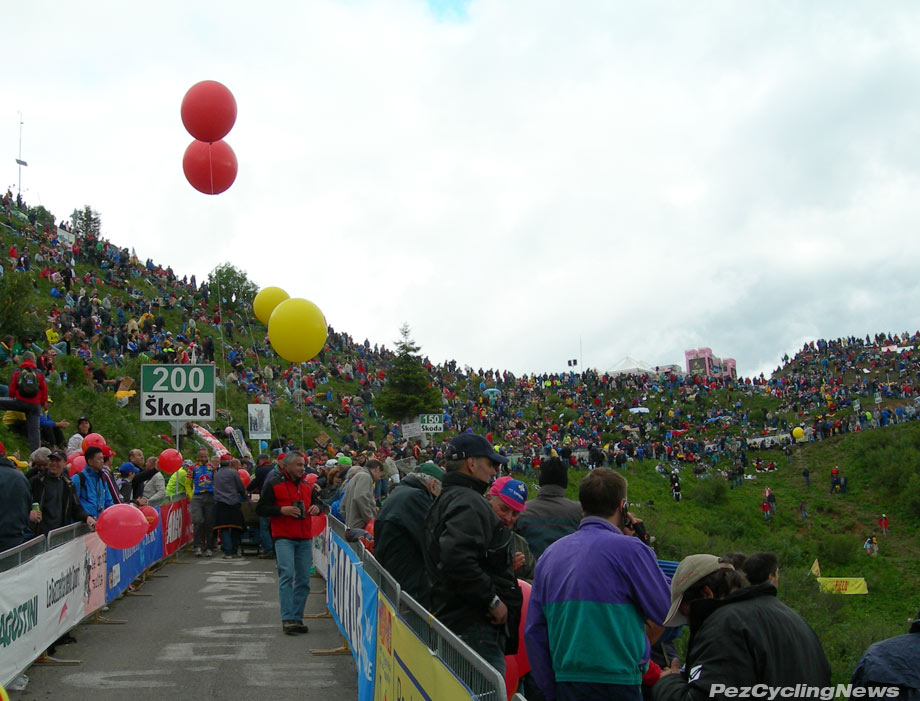 Il capo a finalemente! One of my truly favorite benefits of doing PEZ is getting inside the barriers at a summit finish. This is exclusive territory – and the envious looks in the eyes of the fans reward with a strange satisfaction – “chi e questa?”- who is that guy – ? I savoured every step as I walked the final 500 meters, the suffering was worth it and I was about to claim my prize… 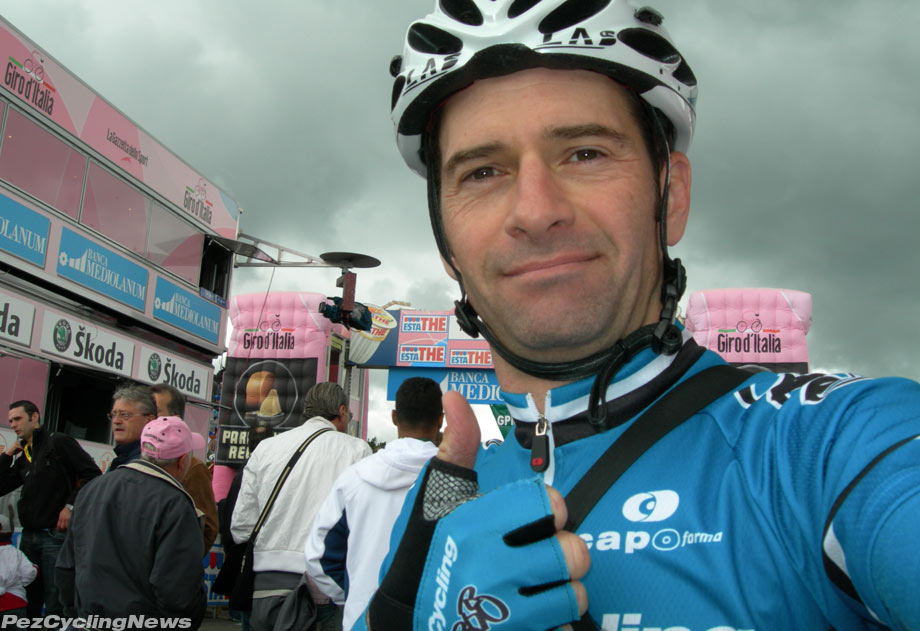 Here’s to a job well done – . It’s 3:00PM, the race is still 2 hours away, and it’s dang cold up here. How long did it take me to climb the Zoncolan? – Somewhere between a heartbeat and a lifetime.

The Day’s Not Over
The final leg of my journey is to take the back road off the mountain, ride the 12km down the valley to the car and find the nearest bar. A quick stop in the press area for some pasta turned a few heads as it’s rare any of the reporters show up looking like actual cyclists. All the security guys thought I was bs-ing that I had creds. 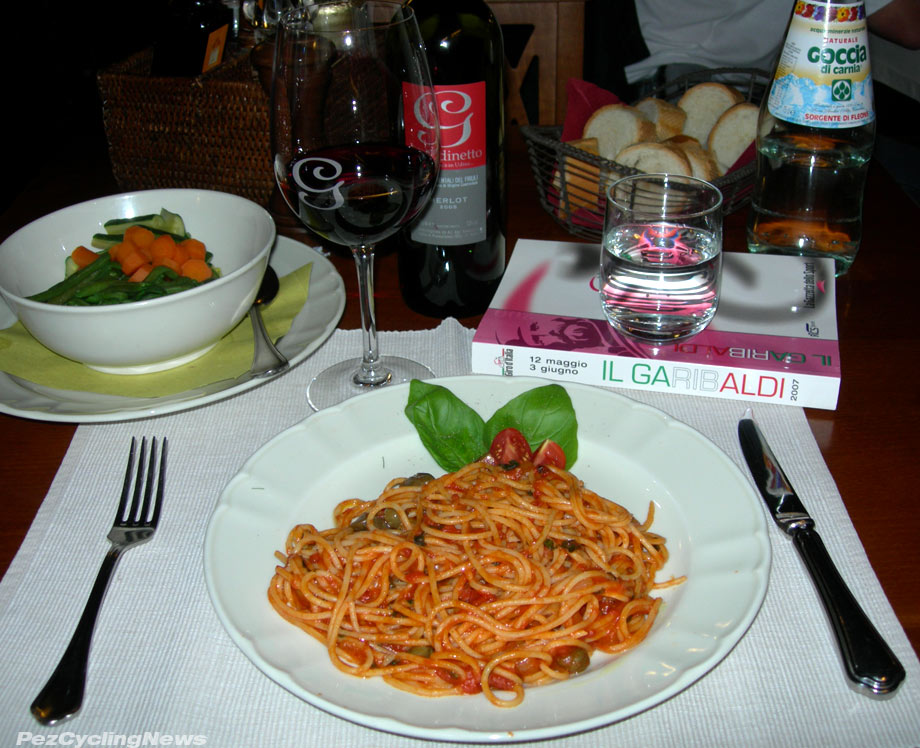 Another reward – dinner at Il Gardinatto in Udine.

The descent off the mountain was a chiller – it was freezing, and I had to dodge team cars racing to the top. The valley run was almost as tough as the climb – even though it was a gradual descent – the headwind was really over the top.

But I made into the bar in time to see Cioni lead onto the Zoncolan… and watch the exciting finale. 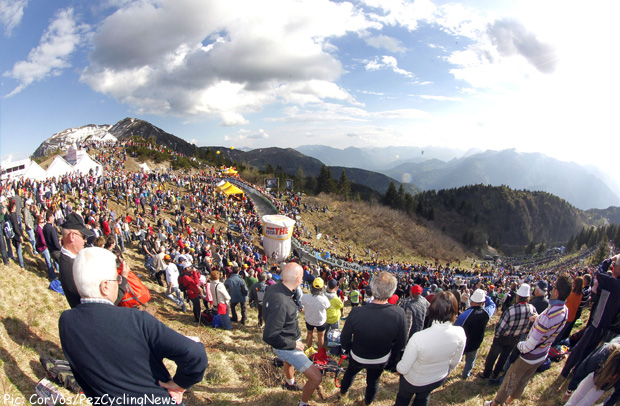 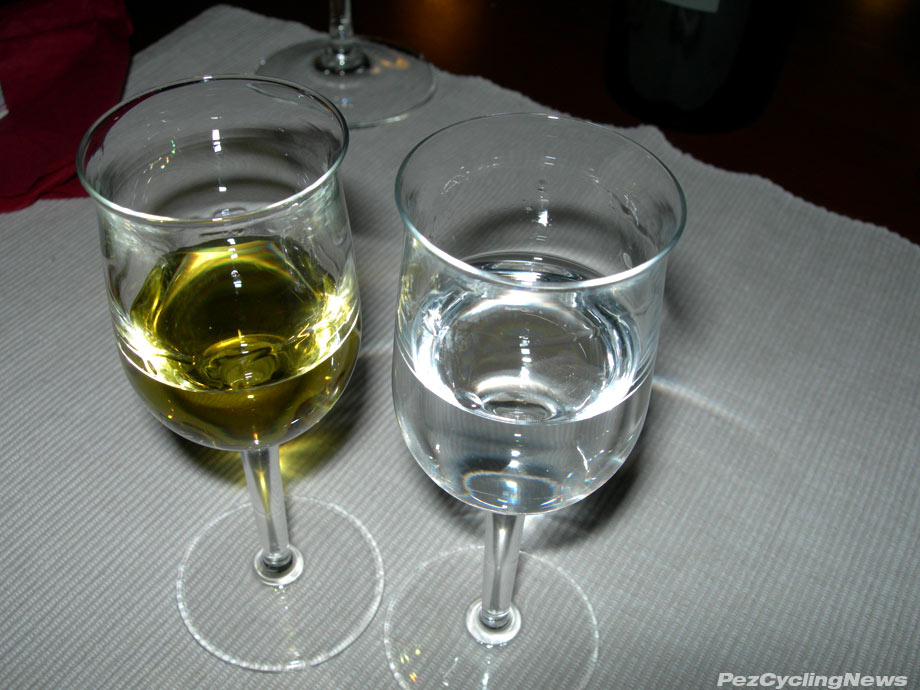 … followed by dessert. After I ordered the grappa moscato on the right, Paulo – the owner, brought me a glass of the chamomile grappa on the left… I know there’s way too much booze here for man or horse… but they sure tasted great.

On a final note – that night in the restaurant, the staff asked if I’d move tables to accommodate a bigger party who needed more space…. The guest of honor was none other than Claudio Chiappucci himself – Il Diablo.

You gotta love the Giro.