Our man in Italy, Alessandro Federico, is addicted to chasing bike races, he just can’t stop. To help him with his ‘problem’ we sent him to three stages of Tirreno-Adriatico, this should get him to the week-end and his next fix with Milan-Sanremo. Hit the road Ale!

There was a time when I was waiting for the Milano-Sanremo religiously, thinking only of her, dreaming of her and that day was coming, and passing so fast that I was starting to wait again for the next one a minute after she was over. I still think of her and I still wait for her, but I learnt to make the time pass faster. Part of the trick is to chase other races; and this is the case with the Tirreno-Adriatico. Three stages, a lot of kilometers chasing the group and new places visited; new adventures and a visit that I will remember for a long time. Follow me, the tale begins… 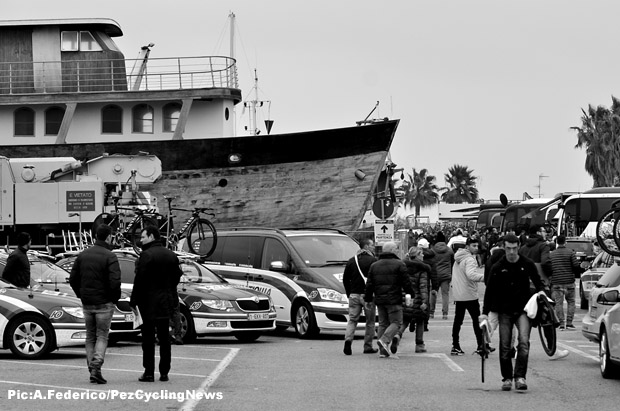 Fishermen’s Race
I like to start from the very end of these three days at the Tirreno-Adriatico, something that just happened few minutes ago. I’m on the highway bound north after I left the last podium ceremony in San Benedetto del tronto, the small town on the Adriatic sea that hosts the end of the “race of the two seas” since… forever. This town on the foggy Adriatic is the base for a huge fleet of fishing boats. It’s also a touristic place, but during winter the main activity is the sea catch. In the end this is really the fishermen’s race, considering that it links two seas, two different cultures (you can’t imagine how many changes there are in Italy from one side to the other!), and has the color of our two seas on the leader jersey. The start village in San Benedetto was the perfect synthesis of this wedding, with riders preparing beside the boat yards. Two different jobs, but in both cases, it’s people leaving places, people that don’t know how to stay calm at home. 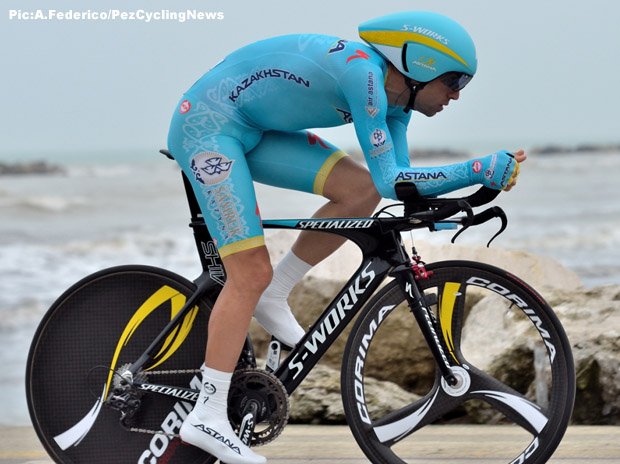 Nibali riding next to the Adriatic sea

Calm at Home
There’s a call I can’t resist. When a race takes place not too far from home I have to be there. It’s a challenge, skipping work, quarrel with the wife and leave the children, but I have had this sickness forever and being part of the PEZ crew made it even worse. So, when the Tirreno-Adriatico arrived in Arezzo I couldn’t miss the opportunity to be there to enjoy the afternoon, smelling the air of great cycling. It’s just five days ago, but now seems like months. It was the day when Greg Van Avermaet won and Sagan took the second place once again. It was a sunny afternoon and while I was driving back home, on the same route for the next day, I noticed a village – Monterchi – which was worth a visit. That was one I won’t forget for a while. 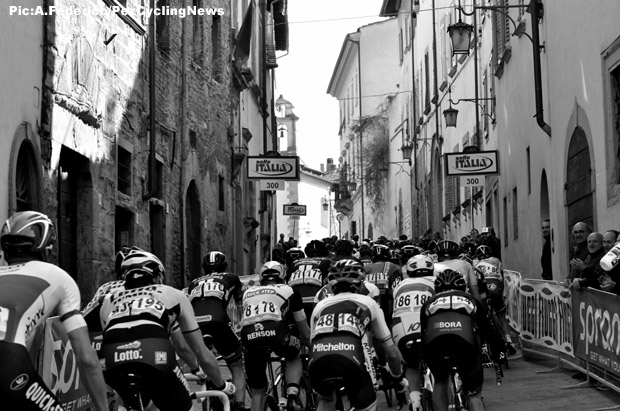 The peloton passing through the Arezzo old town 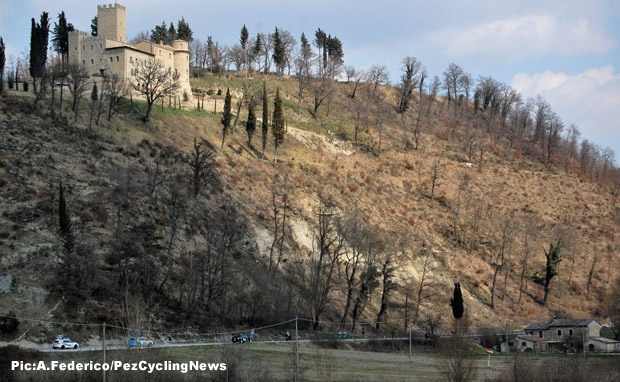 La Madonna del Parto
Tuscany has many places to visit, many museums, but the one I found in this little village is a unique opportunity. Inside this museum there’s only one fresco, but colossal in terms of importance. It comes from the fourteenth century and was made by one of the most famous humanist ever: Piero della Francesca. This painting can be read in two very different ways, two interpretations that are both valid, both fascinating. Most of the people see in this fresco the worry of a mother, waiting for her son, Jesus and two angels opening the tent. But experts noticed the angels are not angels, but one woman and one man, part of the same idol – the androgynous – separated by the Catholic Church; in this case the Madonna is sad, because she is pregnant with the one that will start the Catholic religion. 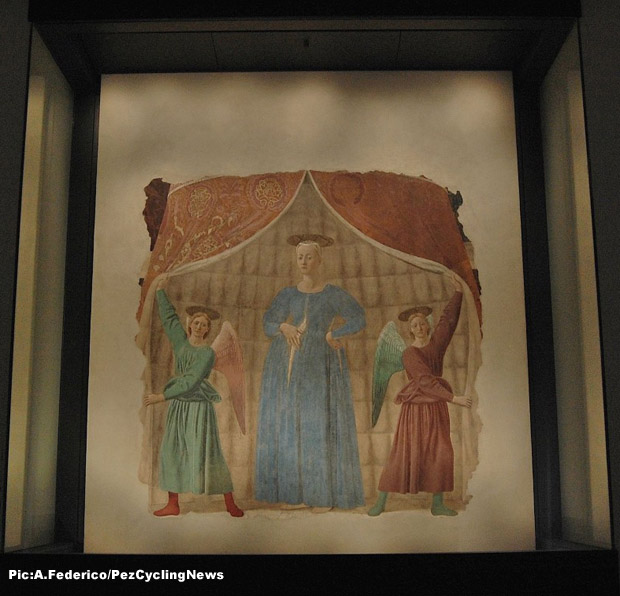 La Madonna del Parto inside her little museum. Chasing a race is not only about cycling but a deeper voyage inside ourselves

Take the one that you like most, but take a plane and travel to Monterchi to see this one; say Pez has sent you. 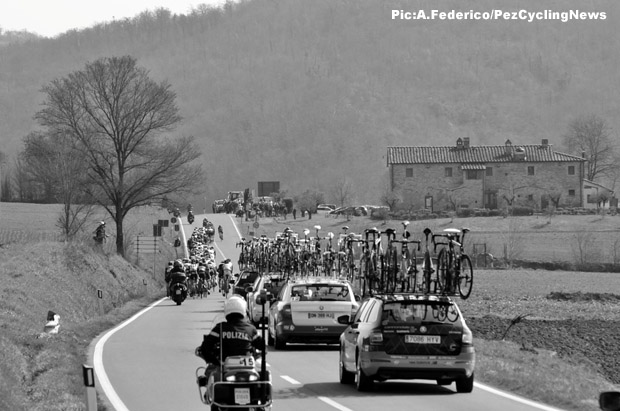 Heading towards the Umbria region 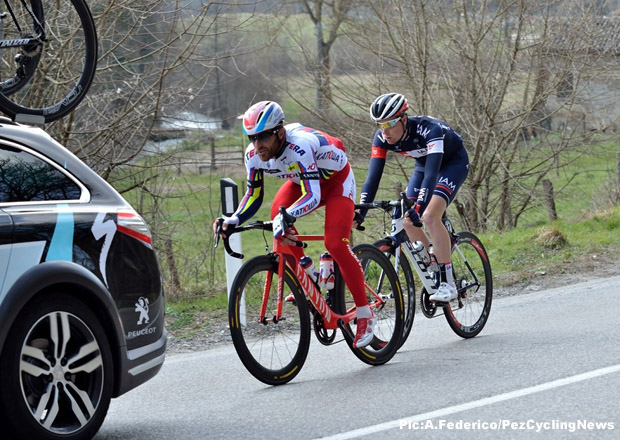 I’m not the only one chasing the group, Paolini leads the chase after a puncture

The Apennines
But Tirreno-Adriatico is especially mountains: Apennine Mountains. They are not as high as the Alps and not as hard as them, but difficult anyway, especially in March. Then, when the weather works against us, it makes them even more difficult. Luckily I skipped Sunday’s stage avoiding another race in the snow. I have plenty already in the archive. The mountain stage that I chased was the one from Arezzo to Castelraimondo, the one surprisingly won by Wouter Poels. That afternoon all GC riders had already in mind the Terminillo summit climb the next day and they didn’t push hard as today’s final climb invited them. The afternoon was gorgeous and for the first time, also warm; nobody could really believe the day after was going to snow. 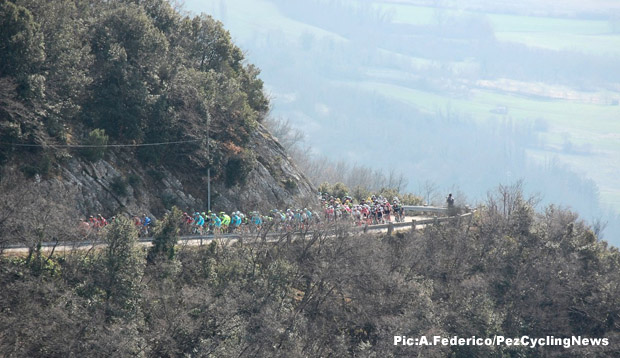 The bunch on the San Romualdo climb 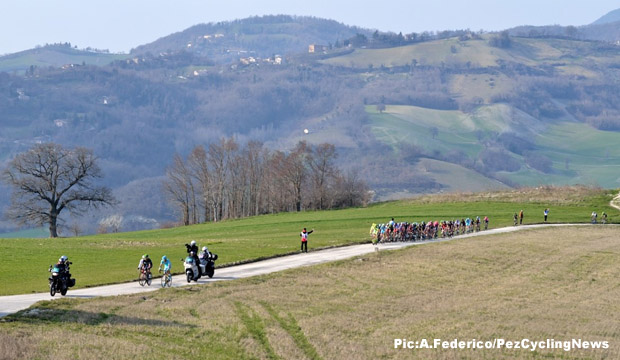 Already Milano Sanremo?
After this race my bet for Milano-Sanremo is even more confused. There was not one man above another, except for Quintana, who’s not down to ride Sanremo. Sagan won on Monday, Cancellara the ITT today and Van Avermaet last Friday. On the other hand, at Paris-Nice there were good riders performing well but nobody was really impressive. That’s the beauty of the race to come, Milano-Sanremo is making us wait. She’s there to please us just in her final exciting kilometers, all the other three hundred are there just to tease us. The same as has happened in all the races run till now, Tirreno included. 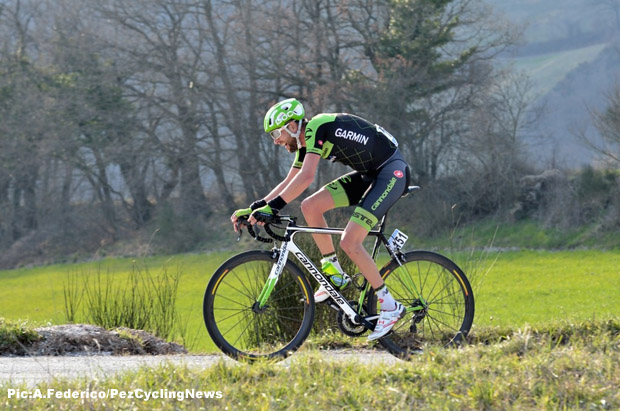 Ouch, Ryder is not yet ready and needs some more quality training before the GT season start 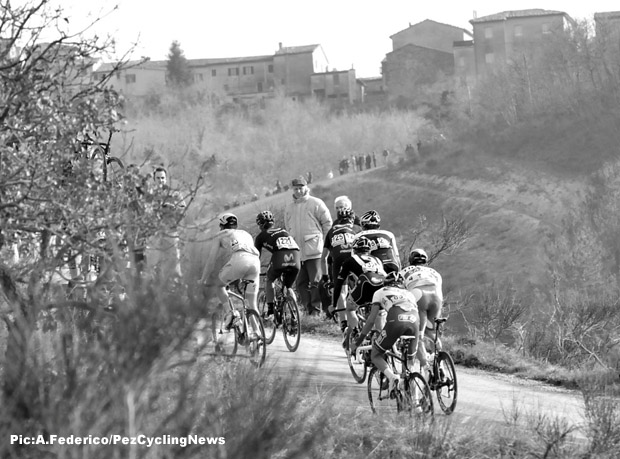 The grupetto climb slowly waiting for a better chance tomorrow

Last Thoughts
On the way back I’m trying to recall all those moments that I lived through during the last days and already those memories are mixed. Already some have gone. Another boat is leaving the small fishing port, the lighthouse is silent and shines periodically. It’s home? It’s somewhere else? It’s just another race that calls; for which I’m waiting an entire life.

Keep it PEZ for everything Milan-Sanremo: Race report on Sunday, video in EuroTrash on Monday and Roadside with Alessandro as he chases another Primavera. 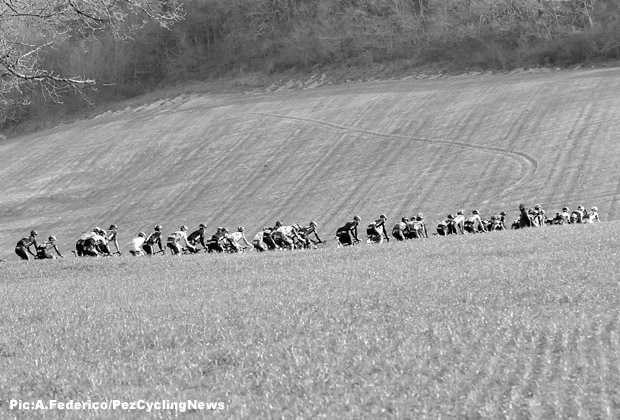