The post-Tour hangover can be a rough one. The cold dark shivering night only really ends with the bacon sandwich of the Vuelta. Luckily we had the brief Bloody Mary of salvation last weekend in the form of the San Sebastian Classic and the London-Surrey Classic. Our man, Sam Larner, was roadside in London and hitched a ride in the CCC Sprandi Polkowice team car.

The London-Surrey Classic is a strange race in that it heads out of London on a fast course and heads back into London on a fast course but in between it meanders through the beautiful Surrey hills. The hills aren’t very tall, just over 200m, or very steep but with the route featuring 5 categorised climbs and numerous uncategorised ones in its 200km parcours it was never going to be a full bunch sprint.

It’s hard to believe that British Continental teams are driving around in this luxury.

My usual race watching position is in front of a TV maybe at home or possibly in a pub, but for this race I was going to be in the front seat of the CCC Sprandi Polkowice team car. I was alongside Directeur Sportif Gabriele Missaglia who some readers might recognise as Giro stage winner in 1997 and a podium finisher in San Sebastian and the Amstel Gold Race. In the back we had soigneur Marek Kulas and mechanic Krzysztof Pokorski. Despite the team being Polish the language amongst them was Italian however everyone spoke English well enough for conversation to flow throughout the afternoon. 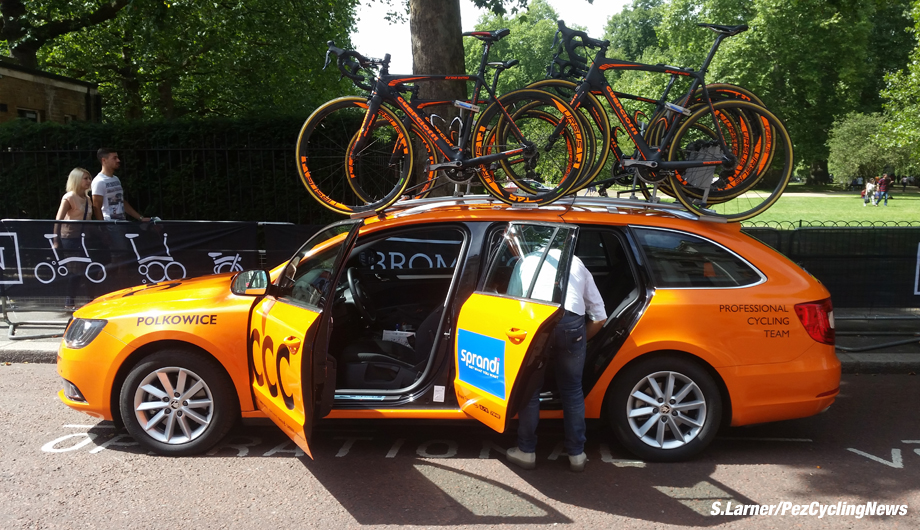 My home for the next few hours.

The team’s plan had been to get a rider in the break and then protect the team’s leader Bartlomiej Matysiak with a view to getting a top 10 in the final sprint. The race started very fast with constant breaks forming and disintegrating. Once the break of the day formed, CCC weren’t a part of it although Gabriele showed no concern. His team were clearly nervous though and when Piotr Brozyna came back to collect bottles Gabriele had to convince him that the race was still going to plan. 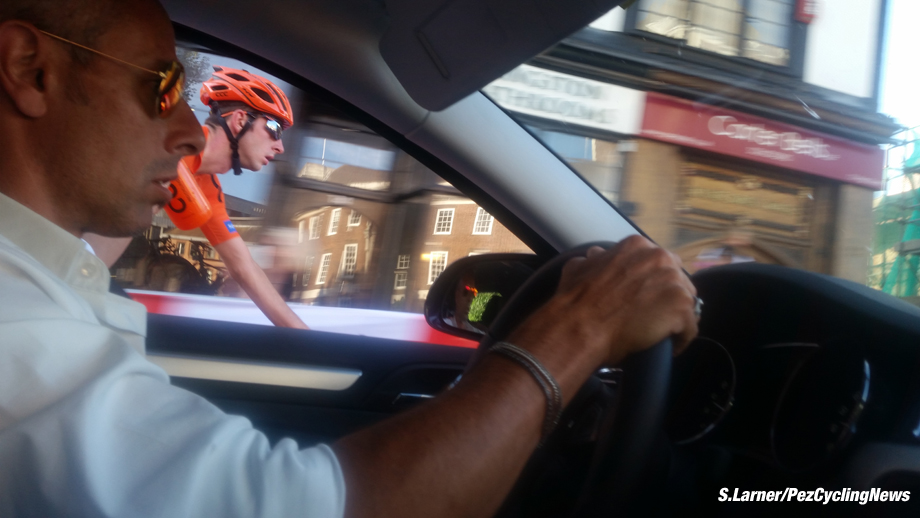 Driving, issuing instructions and handing out bottles. Being able to multi-task is a prerequisite for the job.

The lull in the action after the break had gone meant that I could quiz Missaglia about his own experiences in the peloton. Firstly though he was keen to talk about the future of the CCC team, their current budget is around 4.5million euros which is a measly sum compared to the 20 and 30 million euro budgets of some World Tour teams. Gabriele did inform me that the infrastructure was in place to increase this budget with the overall plan to apply for World Tour status in 2017. Personally I think this will be unlikely unless they make a visible effort to distance themselves from Stefan Schumacher and Davide Rebellin. As an aside it’s strange that English speaking ex-dopers are welcomed back to the highest level with open arms yet non-English speaking dopers are treated like pariahs. That’s probably an observation for a different article though. 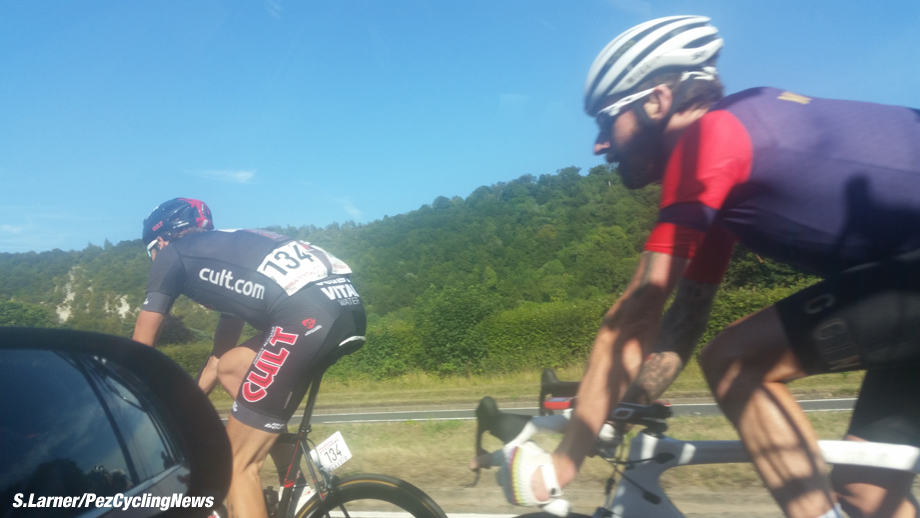 A slightly different angle than the usual close ups of Wiggo.

Gabriele’s own career would probably be categorised as that of a journeyman. He spent time riding for most of the professional Italian teams in the 14 years that he was a pro. He told me that his average season began at the Tour Down Under then he would head to Milan-San-Remo over to the classics then on to the Giro before his first break in July. He would then be back racing the smaller Italian races in August with his final race of the season at the Japan Cup in mid to late October. 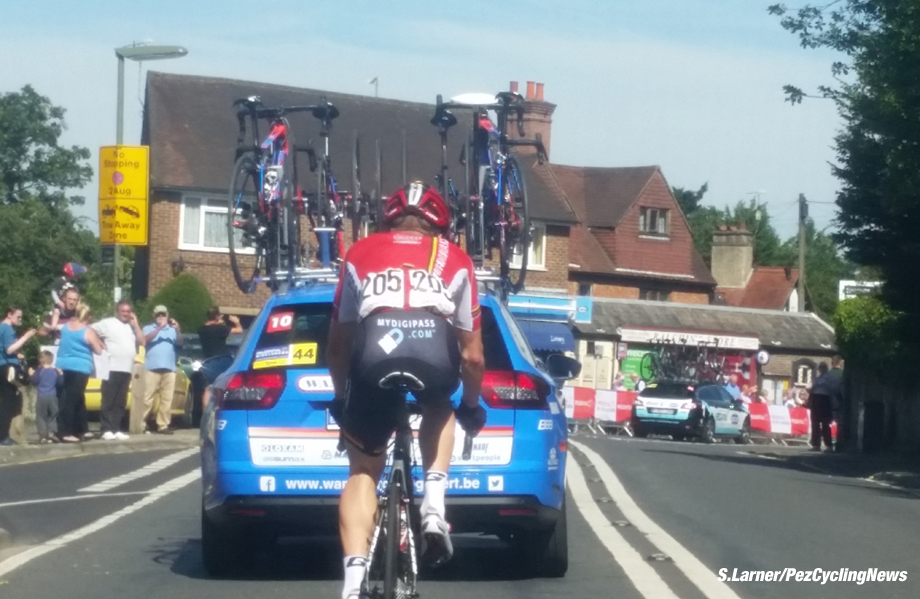 Kenny Dehaes taking all the assistance he can get to move back to the peloton.

Although the reviews of Asian bike races are normally mixed, he was very complimentary about them explaining that his experiences racing at the Tour de Langkawi and specifically the Tour of Qinghai Lake were the best in his whole career. He hasn’t been so lucky as a DS though, late last year he was sent to the Tour of Hainan in China, it rained every day and the hotel he was staying in had no internet and a very limited selection of food. He vowed never again to go back to that race. Back to our current race and it was almost time for Marek and I to leave the car to set up at the feed zone, because this part was done in laps we could jump back in later. 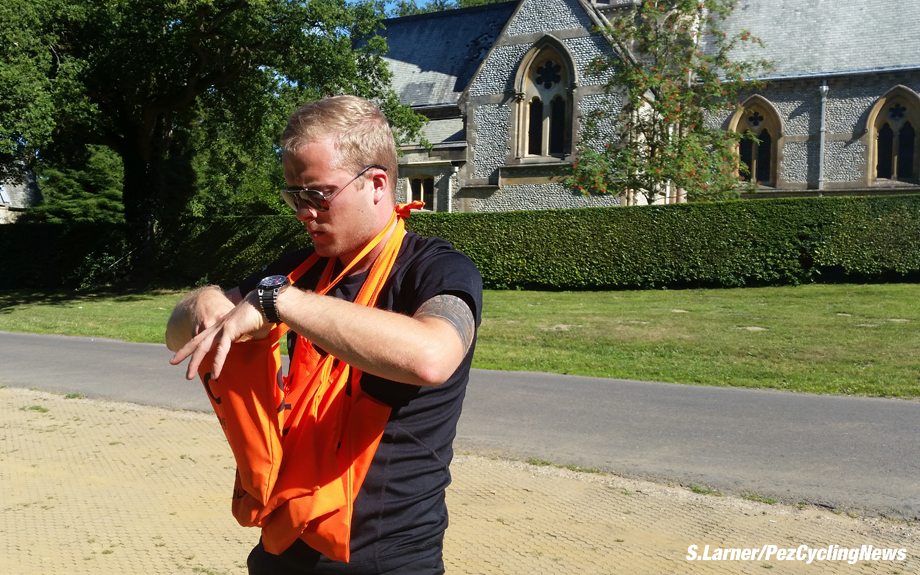 Being a soigneur is hard, especially with only one team car at the race.

Marek had been a promising amateur who had moved to Italy to further his career. CCC had offered him numerous contracts but he’d turned down each one in order to stay racing in Italy. Unfortunately he then suffered a knee injury and when his team had stopped paying him and his girlfriend had got pregnant he decided to join the team as a soigneur in order to ensure a regular wage. Our feed zone spot was located opposite the St Barnabas church in Ranmore Common. Unusually the crowds here weren’t that large so after the first lap we saw two kids walk passed who were laden down with mussettes and bottles. Marek summed this up by saying, “to them a bottle is worth a million dollars”. 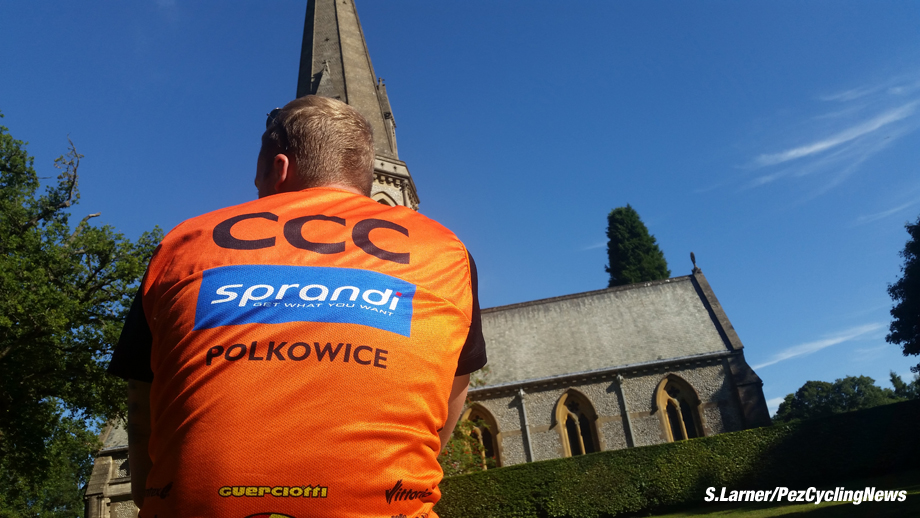 The feed zone was located in front of the beautiful Ranmore Common church.

When the riders came through for the second lap the field had split apart completely due to a crash at the start of the lap. There were no CCC riders in the leading group but the second, and largest, peloton contained three of them. When the team car arrived Gabriele was finally flustered as he revealed that the crash had taken down Lukasz Owsian who had now abandoned. As we got ready to catch up Lukasz appeared next to us in an ambulance, Gabriele angrily explained to him that there were already four guys in the car so he would have to go in the broom wagon. Whilst this was happening the race had gone up the road and we were way behind, what followed was two minutes of incredible driving where we hit 100mph on multiple occasions, passed the back group, then caught up with a larger group which contained two CCC riders to give them some bottles then headed on to the front peloton where we had three riders including Matysiak. 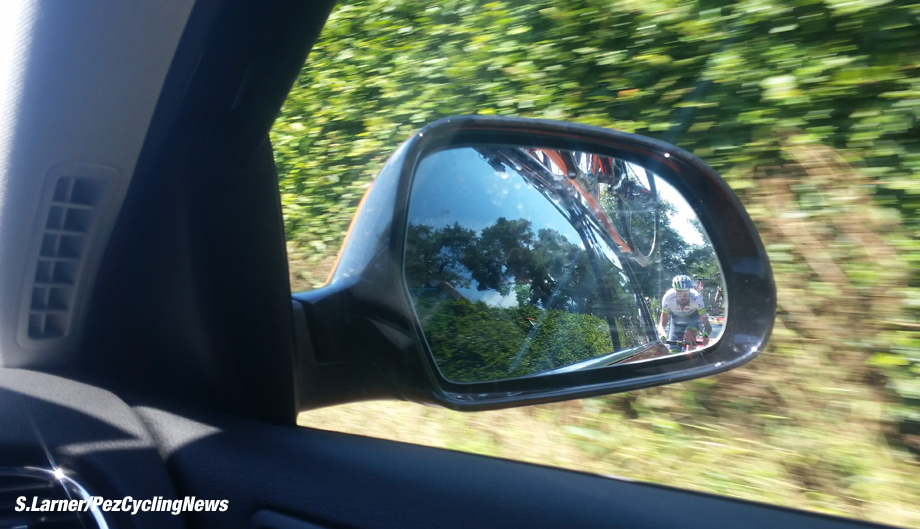 When Jens Mouris, the biggest man in the peloton, is on your bumper it’s wise to give him warning when you’re slowing down. If there’s a crash the car might come off worse.

Almost as soon as we had caught up to this group the winning group went and with just three riders there for CCC and most of the major teams represented in the break it was always going to stay away. Gabriele was tranquilo he had expected very little from the race so he didn’t see it as an opportunity lost. We passed the time driving through the huge crowds in South West London by discussing where Mark Cavendish would end up next year. The general consensus was that it would be either Trek Factory Racing or he would remain at Etixx – Quick-Step. 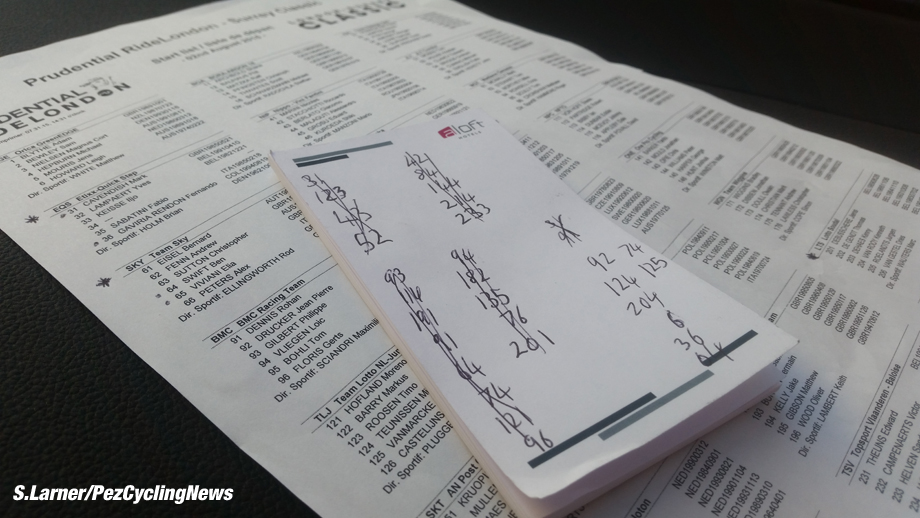 One of my jobs for the day was to note down who was in the break. The ones that didn’t stick have been crossed out.

We got to the finish with the news that Jempy Drucker (BMC) had won and Matysiak had been the team’s best performer with a 26th place. It had been a hugely enjoyable day and I left with a new level of respect for the job directeur sportifs do, not least the skill required to drive a car and pass out bottles without crashing. I also left with a souvenir bottle filled with energy drink which, after a very hot day where I’d forgotten to bring any water I also valued at around a million dollars.

Britain’s reputation for massive crowds proved to be well founded.

Thanks to the CCC Sprandi Polkowice team, Directeur Sportif Gabriele Missaglia​ and press manager Adam Sikora for setting it all up.

Lee’s Lowdown: Danielson And The Pragmatism Of It All!