Ed Roadside in Belgium: From the Omloop Het Nieuwsblad on Saturday, Ed’s gang of ‘Race Chasers’ moved a little down the road for the second race of the Belgian opening weekend – Sunday’s Kuurne-Brussel-Kuurne and more cobbled action. A stunningly dry day for a northern Classic, but that wouldn’t ‘dampen’ the atmosphere. 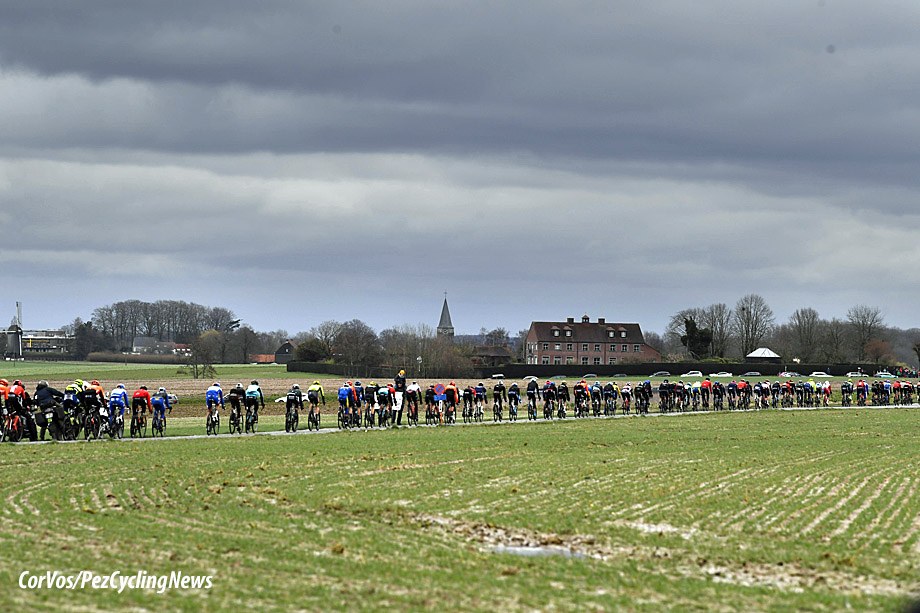 I love the drive from Gent up to Kuurne, staring out of the car window at the fields, the canals, tree lined avenues, the steeples, tiny concrete roads that would be great to explore on the bike. 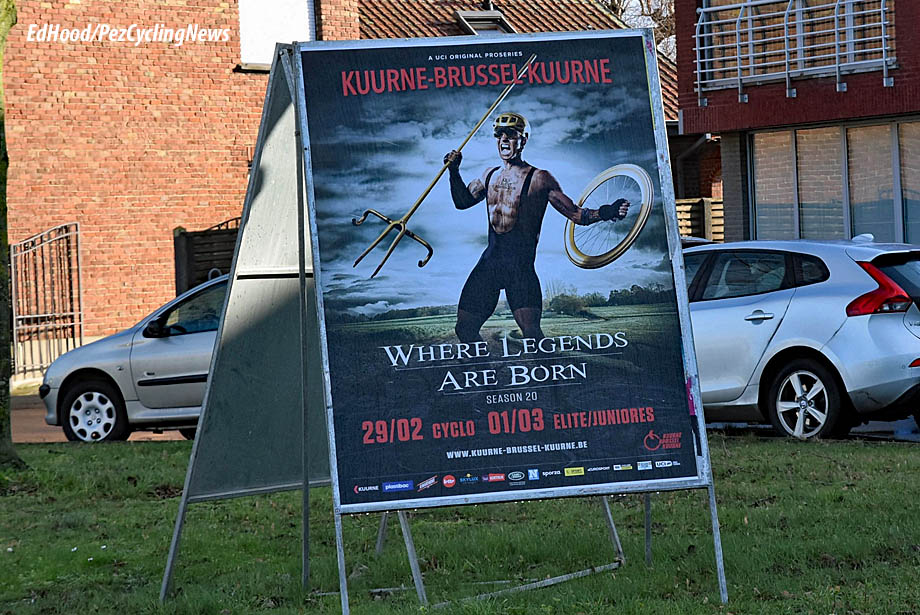 There was a little rain on the way up but by the time we got to Kuurne it was a mild, sunny morning, ideal for wandering down the main drag where the busses line up and checking out 2020’s new hard ware. Deceuninck apart, access to the busses and those shiny bicycles is no bother – albeit the patch does get busier with each passing year. At the windows and floors boys encampment it’s different, the crowd of worshipers is thick round the bus as they strain for a glimpse of their lupine idols in blue and white. Every team is well presented, especially the big budget outfits like Trek – another difficult bus to get close to with everyone desperate to see Het Nieuwsblad winner, Big Jasper. 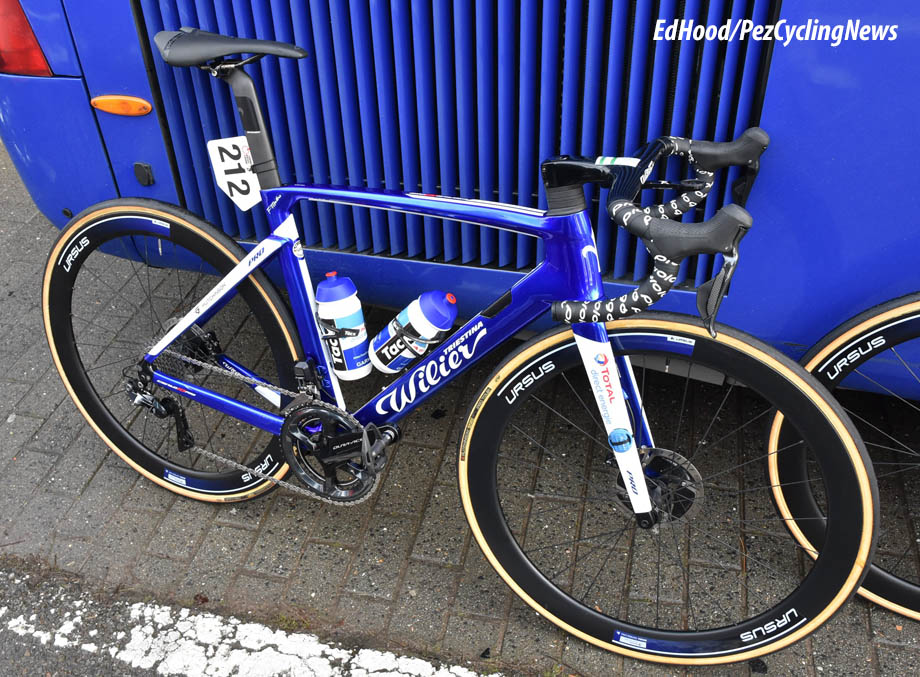 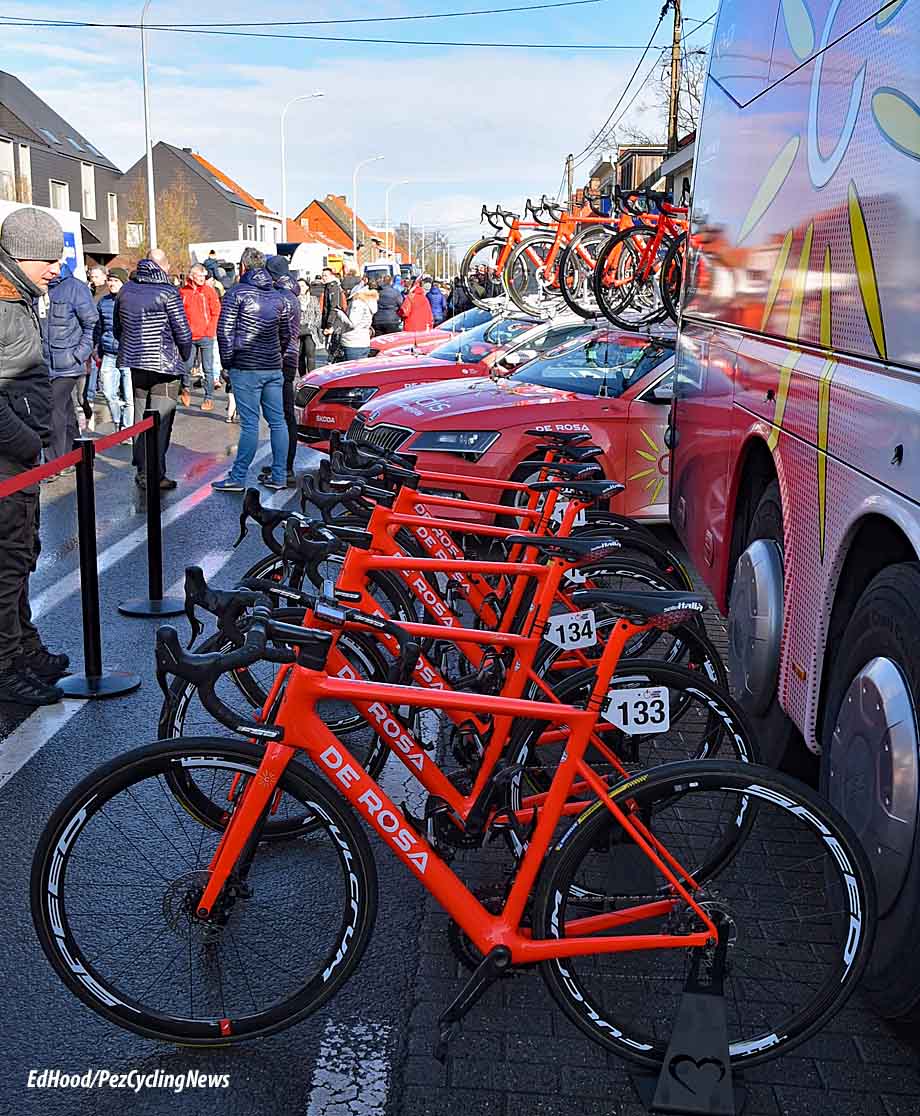 We especially liked the Cofidis De Rosas and the Wiliers of Total Direct Energie. 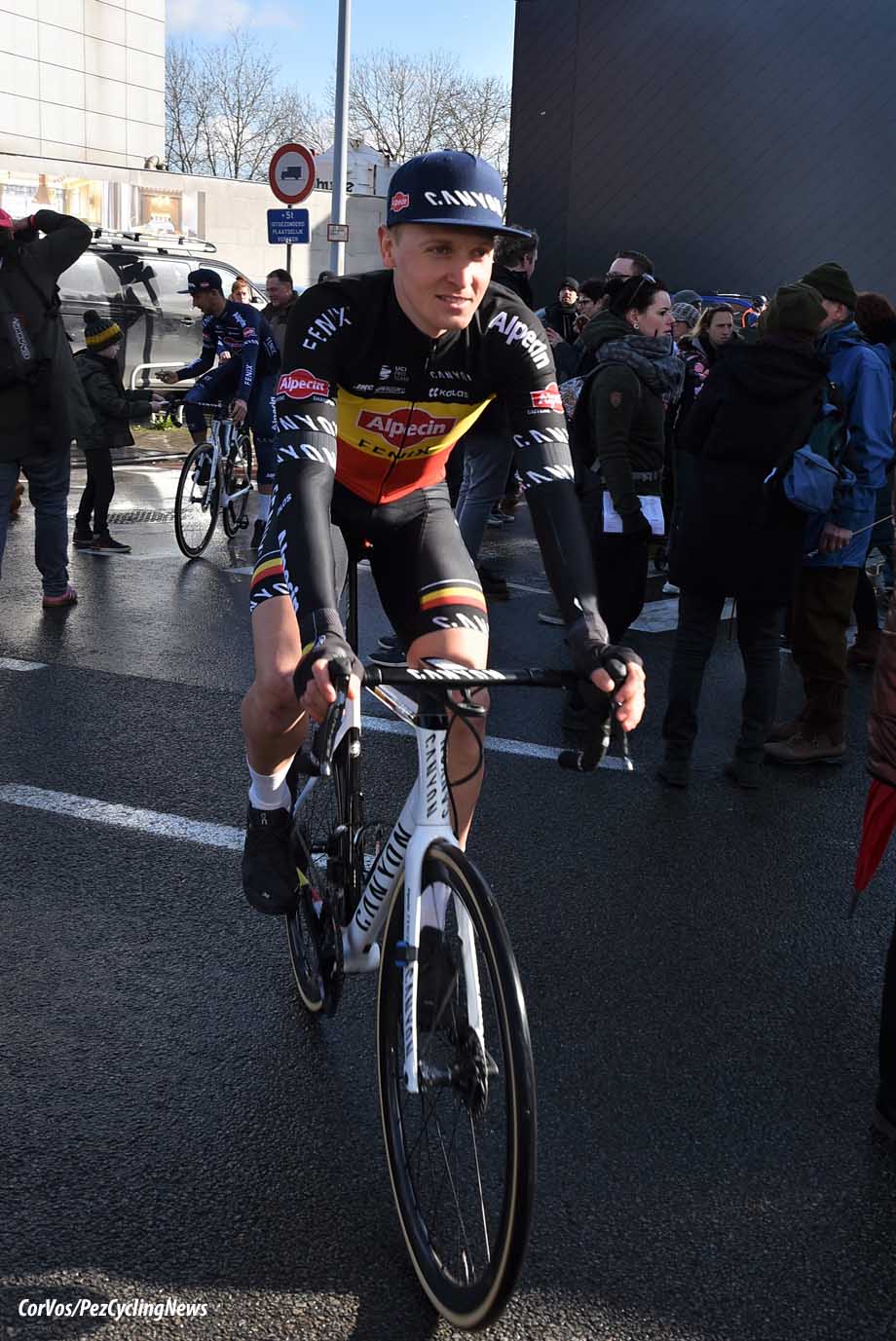 We also liked Belgian champion Merlier’s (Alpecin – Fenix) white Canyon with understated red, yellow and black bands on the chainstay. Discs: not all the teams or on them, Ineos, AG2R, Vlaanderen and UAE all stick to the old faithful rim brake.

Ineos even give their riders choice of the 28 mil tyre friendly K10 or the ‘even more aero’ F12 – either one would do me – but both with rim brakes. For the Classics some of the Shimano teams are replacing the Dura Ace front discs with the heavier duty Ultegra and even XTR mountain bike discs, saying that the Dura Ace disc isn’t robust enough. However, the XTR discs can’t cope with the heat build-up on long mountain descents so aren’t a panacea. There’s also the issue of rotor size standardisation and axle clamping – some mechanics saying it’s fine to use power tools to secure the thru axle and others saying it’s not, running the risk of stripping the threads on the axle receiver. In short, there’s still development to be done on disc brakes. 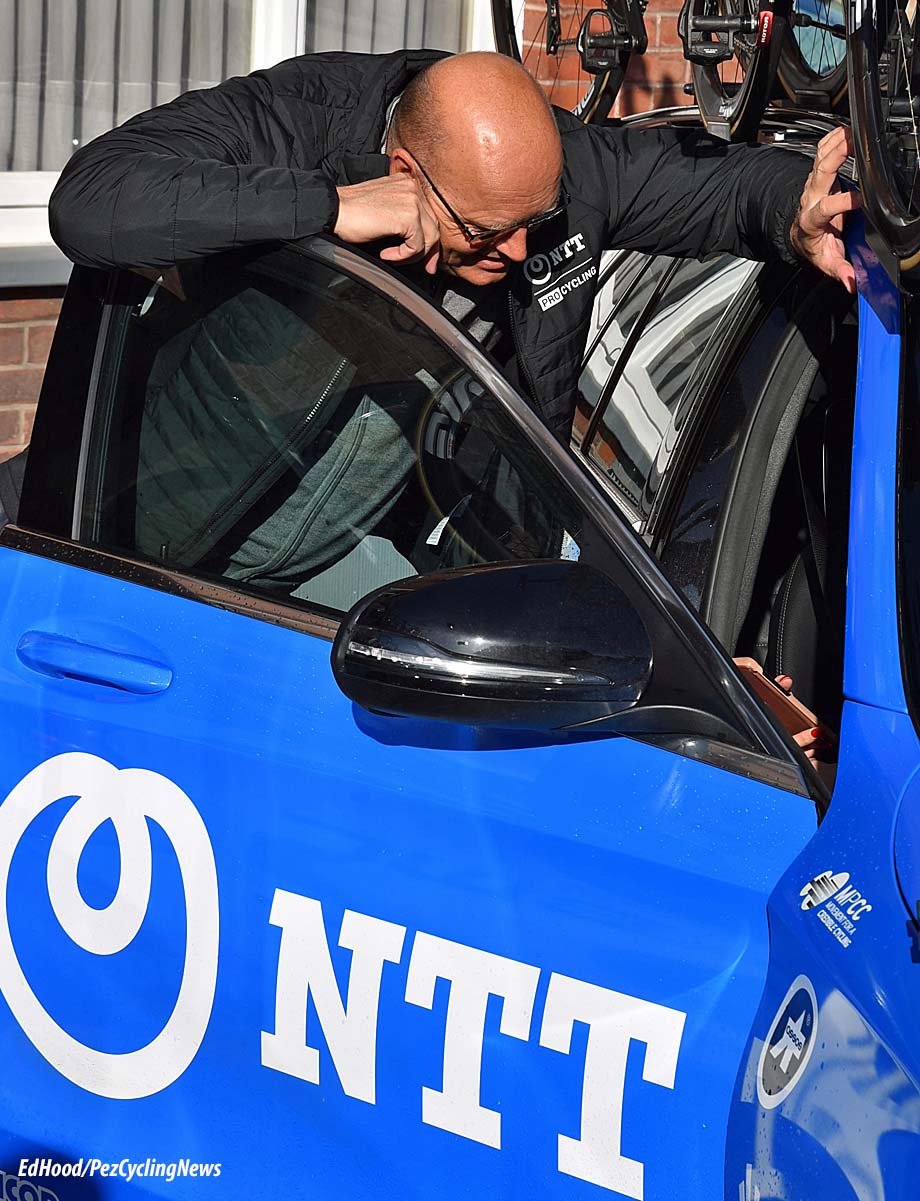 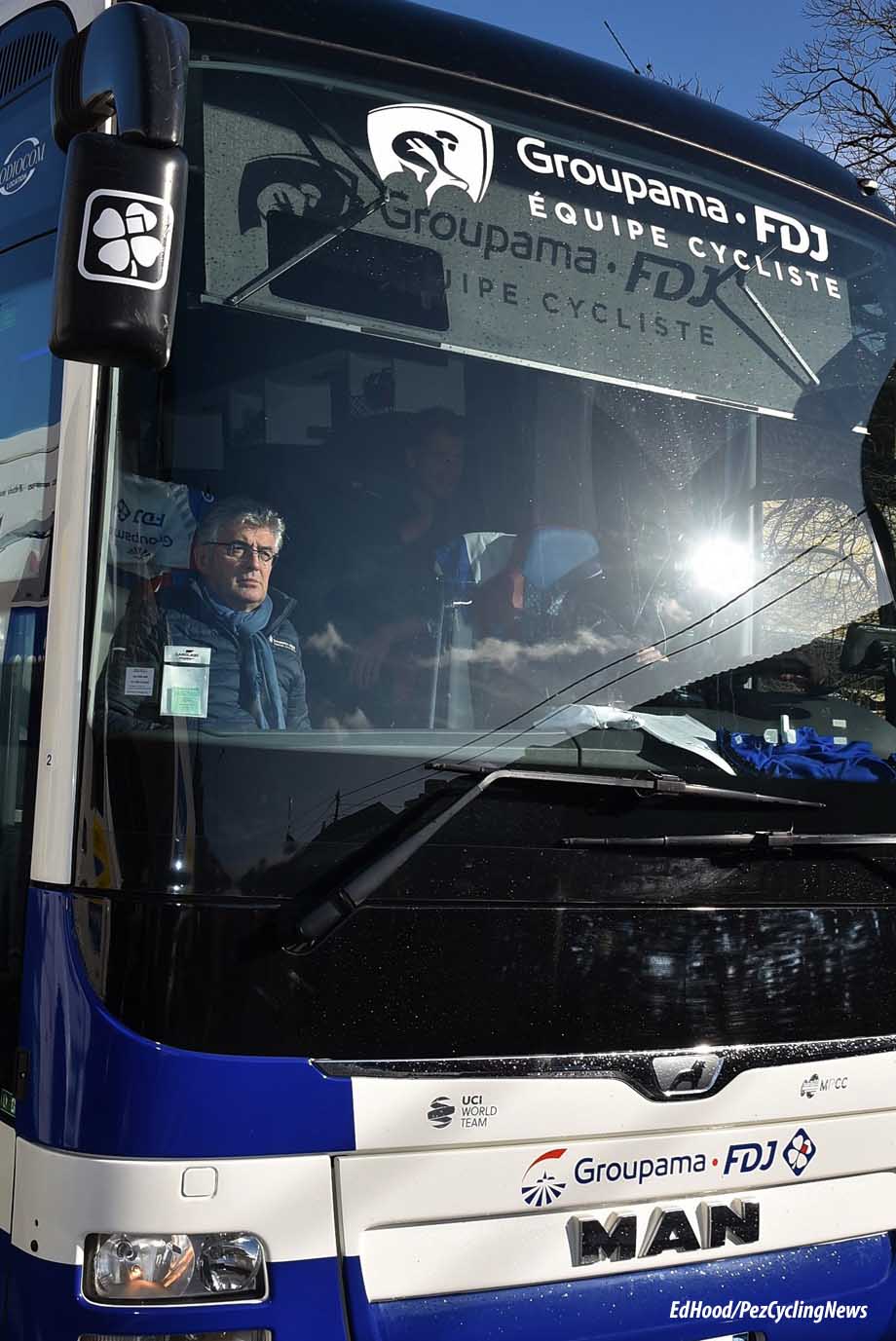 Bikes duly skeked we also spotted a few ‘names’ – like the resurgent Bjarne Riis at one of the NTT cars and an inscrutable Marc Madiot navigating the FDJ team bus in. 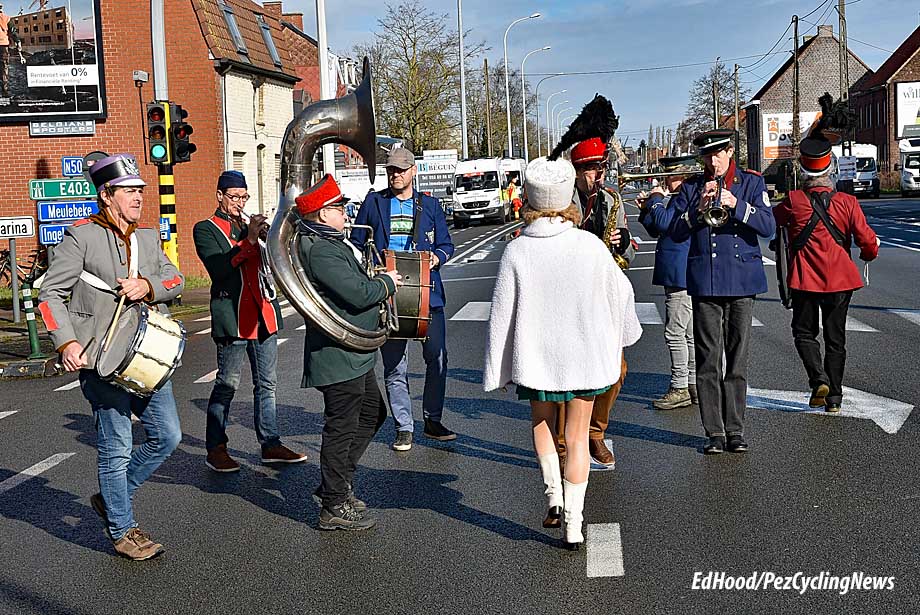 And, of course, we have to snap one of the crazy bands; all that done we headed for our first spot, the top of the Volkegemberg, the first climb of the day, long straight, cobbled at the top and 32 kilometres in. Once we were out of the shelter of the buildings in Kuurne the wind was much more noticeable. 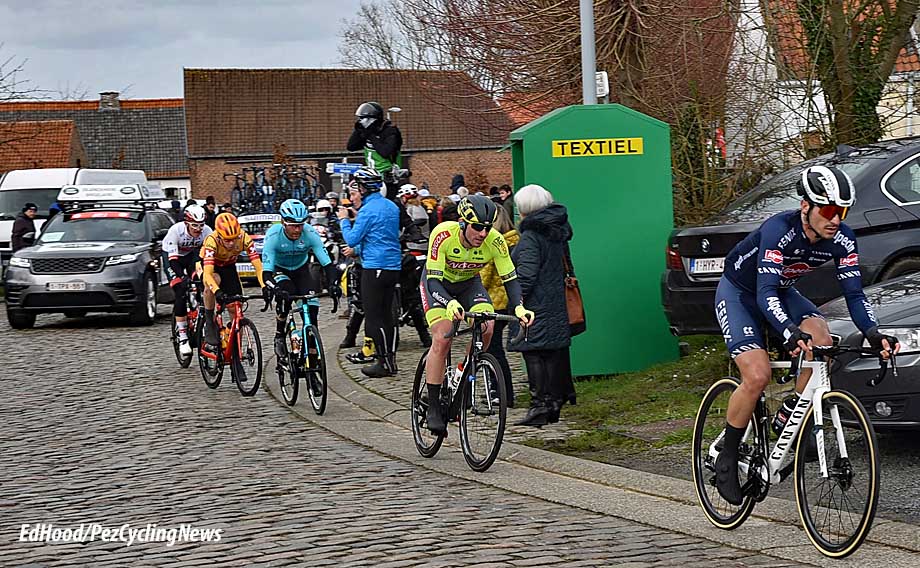 There were five away, with a minute plus; an Alpecin, a Brussels Wallonie, an Astana, an Uno X and a UAE. 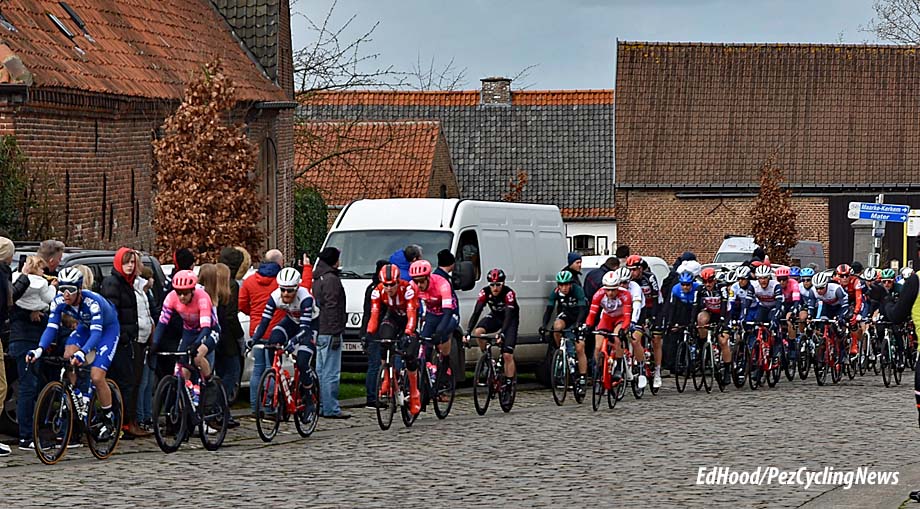 Behind, whilst it wasn’t ‘a bloc’ they weren’t wasting time either as the carbon rims ‘clacked’ across the cobbles. 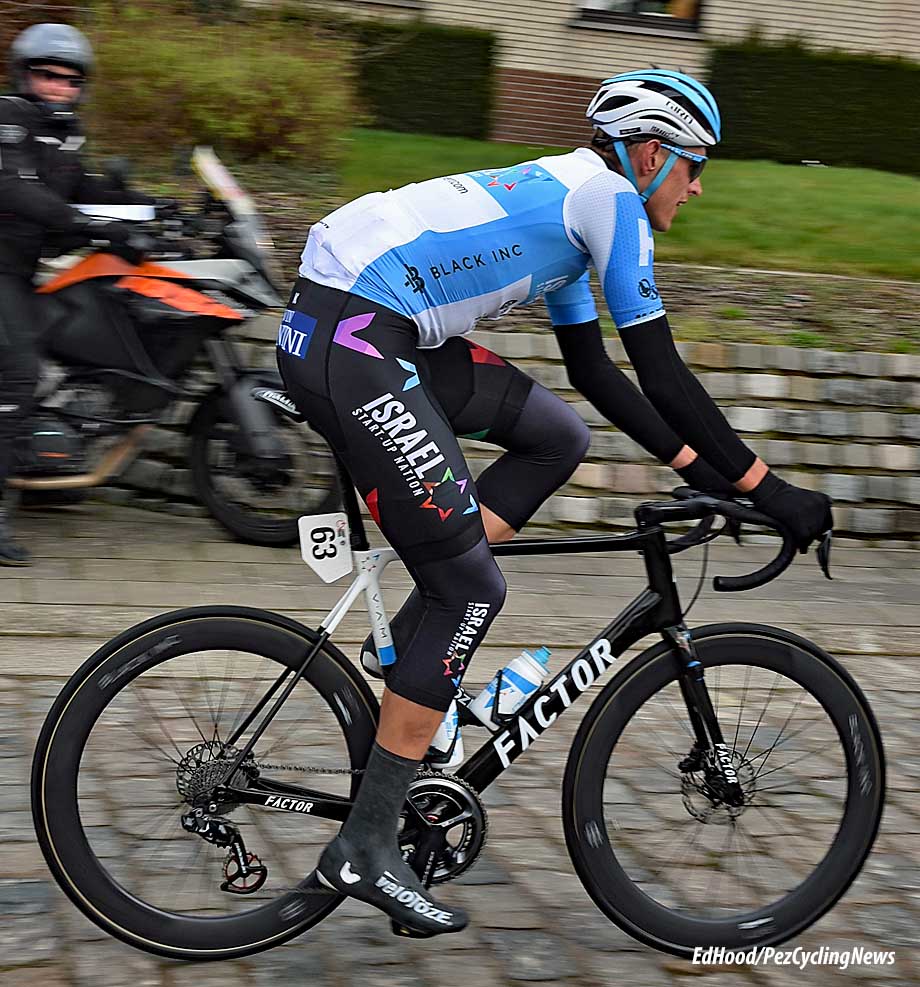 The last time I snapped big German ‘Classics Man’ Nils Politt (Israel Start-Up Nation) he was zipping round the boards at the Bremen Six Day; the surface was a tad gnarlier today. The second spot of the day was the top of Bossenarstraat, the third climb of the day, 79K in, a nasty, steep concrete ramp. The house at top was where famous Flemish landscape painter Valerus de Saedeleer lived and worked – this is the stuff you don’t get on other websites. 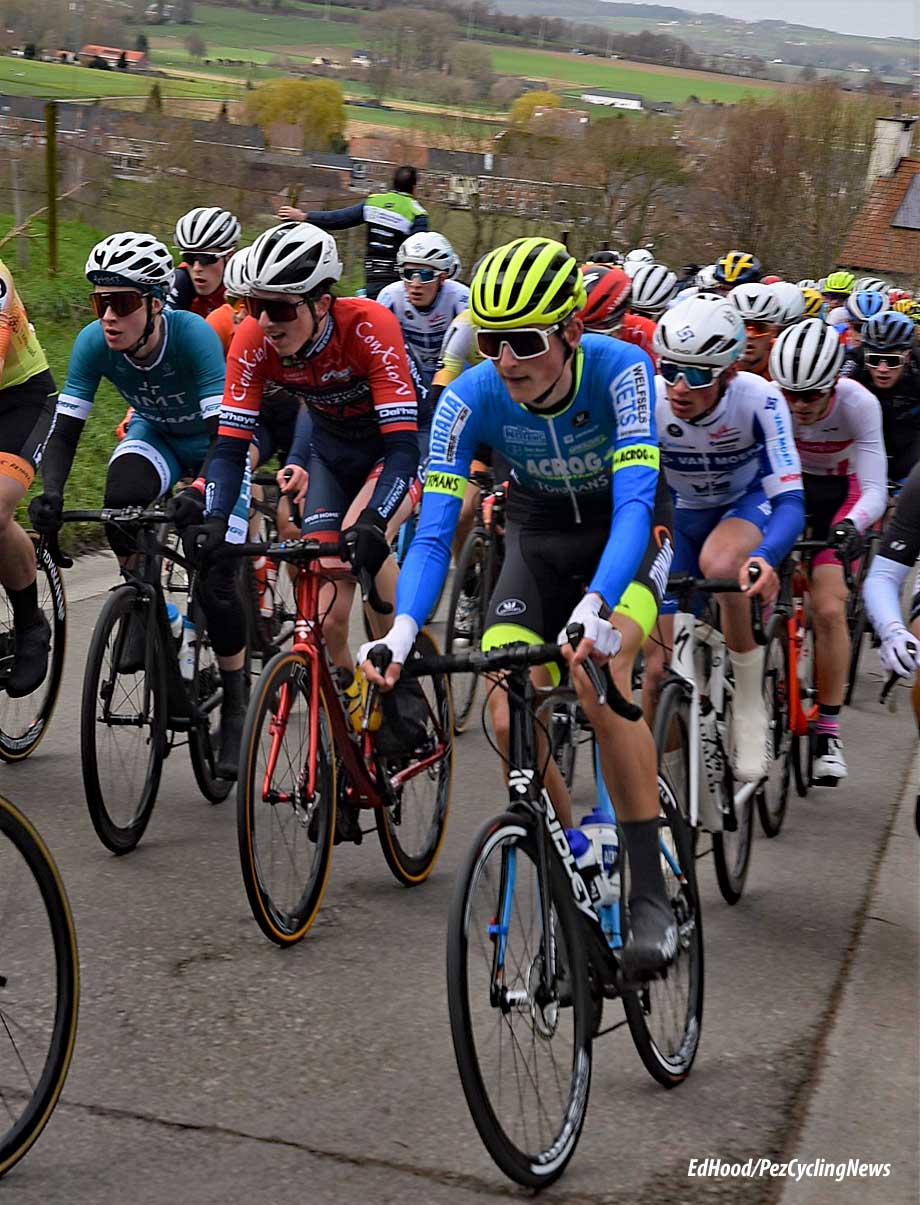 Before the Elites arrived, the junior Kuurne Brussels Kuurne streamed past with almost as much fanfare as the pros and just about as many motor bikes and vehicles involved. Cian Uijtdebroeks would run out eventual winner covering the 122K in 2:59:39. 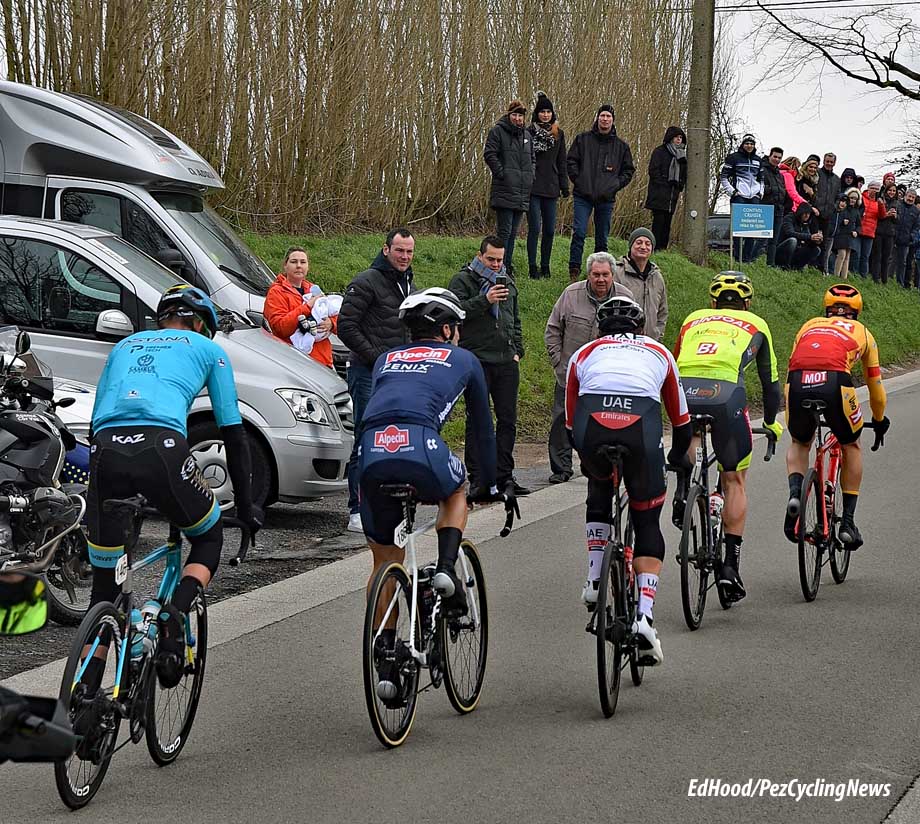 The five escapees had built their lead to 5:30 and again, whilst it wasn’t full on, there was no chatter in the peloton. 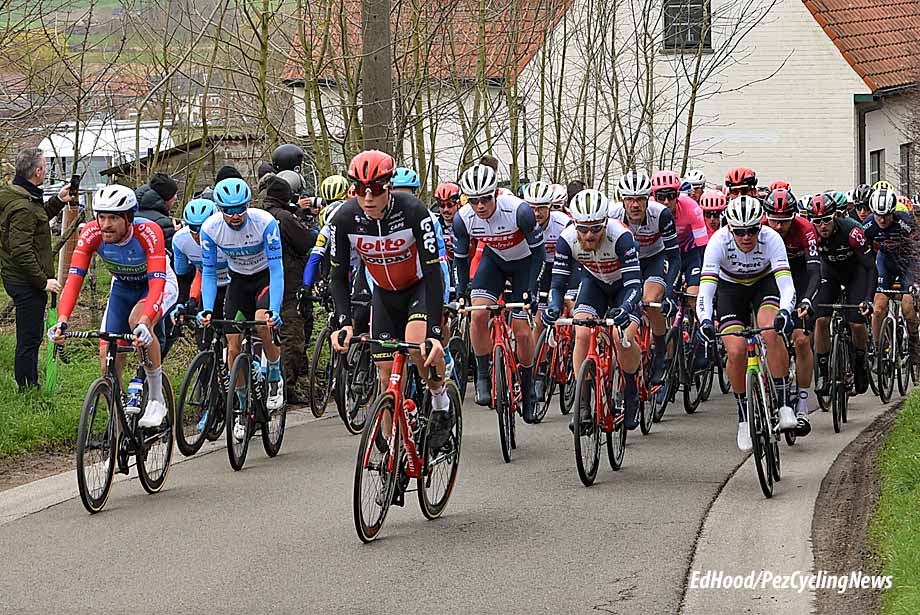 Mads Pedersen was well positioned, obviously not wanting to miss his bottle and there were a few big names well to the fore; Trentin, Stuyven, Rowe, Degenkolb. . . 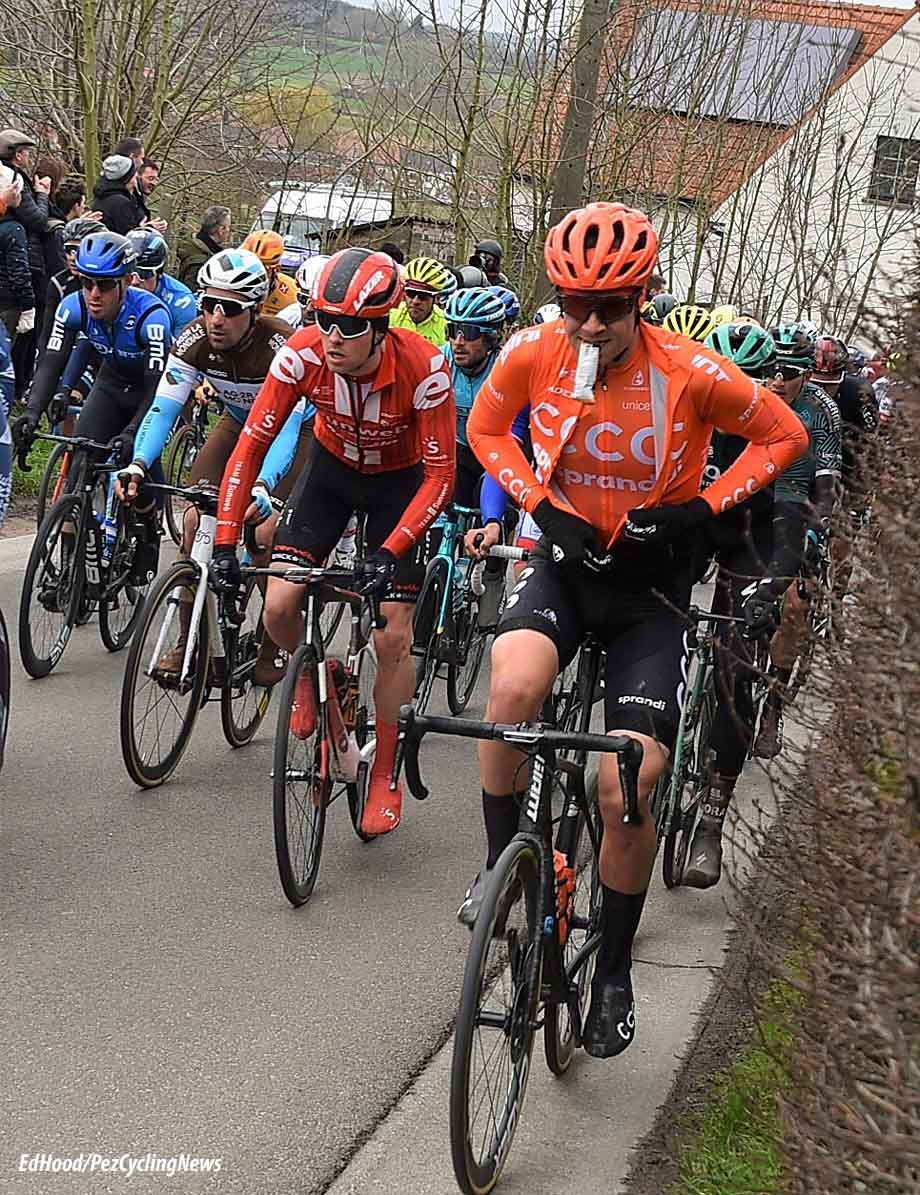 And who says men can’t multi-task; this CCC was riding up a steep hill in the gutter amid a big bunch, hands free, taking off a layer whilst on the brink of munching an energy bar – respect
Kuurne is a difficult race to see more than a few times due to the nature of the parcours and we plumped for our final sighting at the top of the legendary Oude Kwaremont of Ronde fame, the tenth and penultimate climb with 58K to ride. 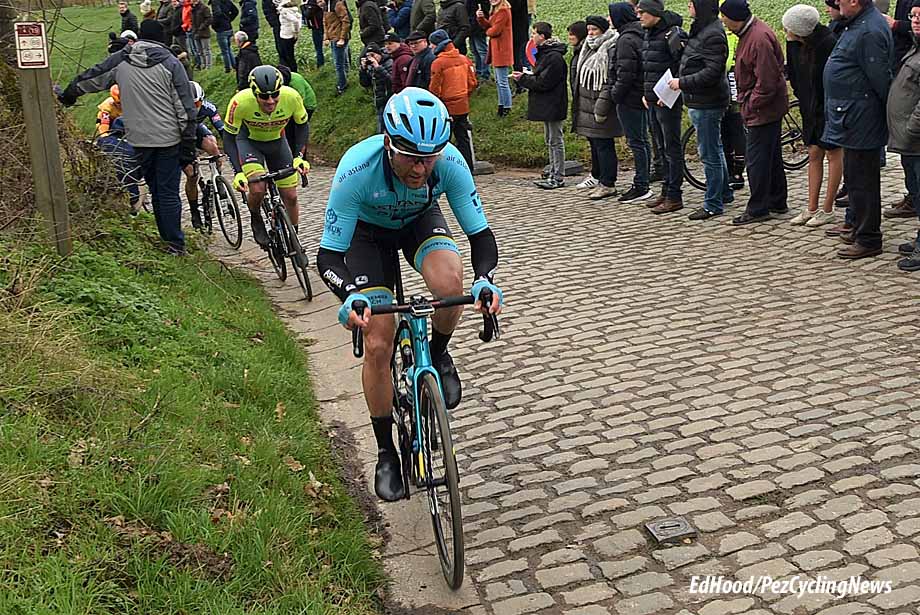 At the top, just before it re-joins the main road, the break was down to four men with Astana leading through. 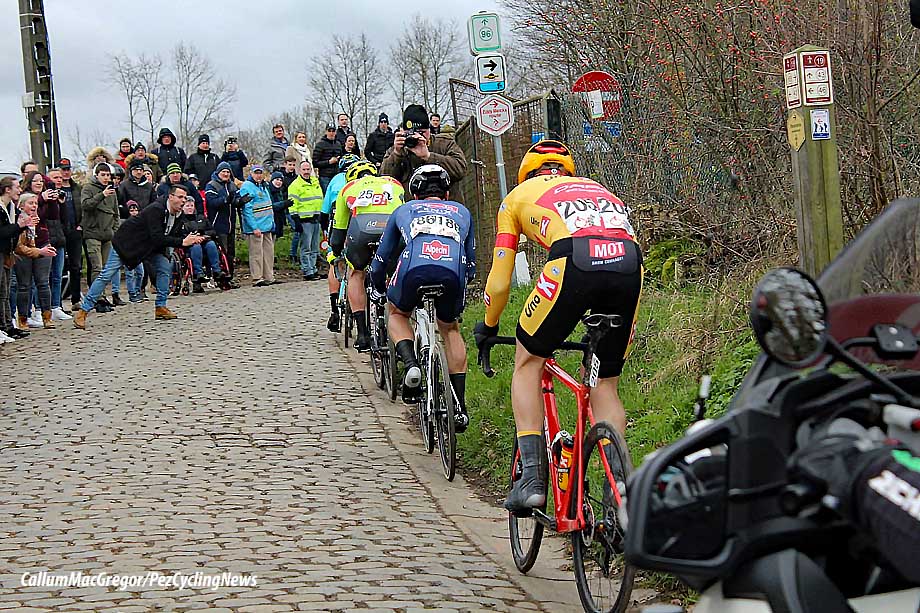 Our boy Callum was snapping away and grabbed some nice images; this one of the rear of the break as they crested the hill. 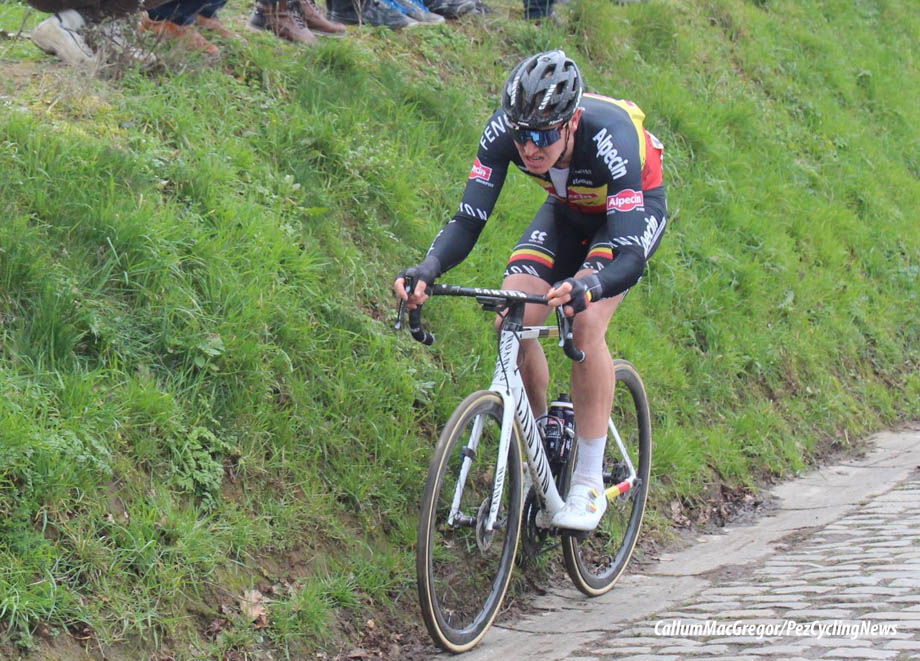 He also got a nice picture of a suffering Merlier riding the smooth but tricky gutter line. 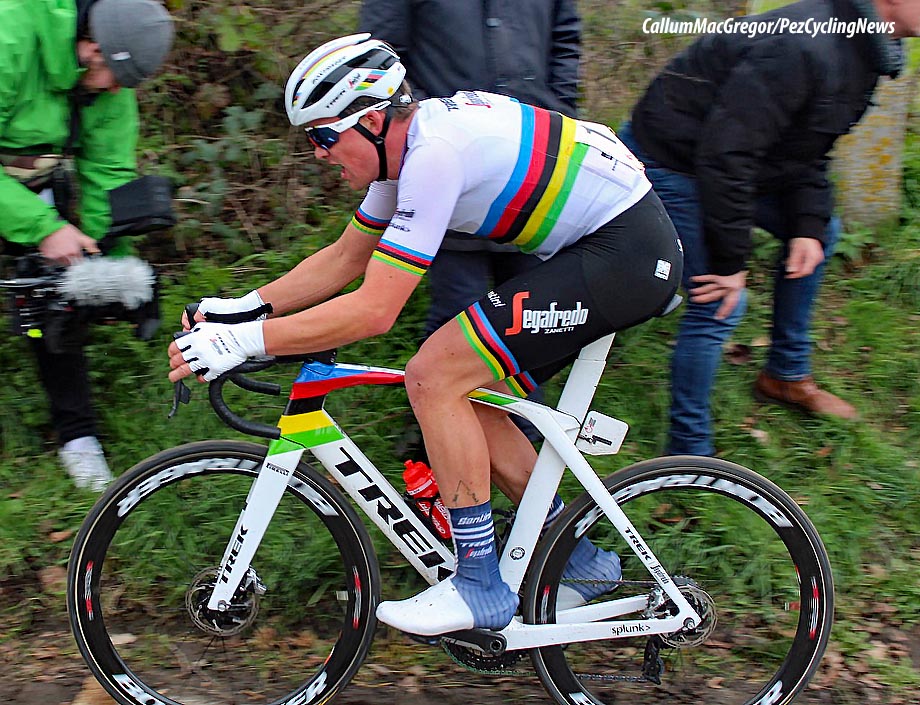 He also recorded that it wasn’t a good day for the guys with the nicest jerseys in the peloton, with neither Merlier nor Pedersen ‘troubling the time keeper’ as they used to say in ‘Cycling Weekly’ magazine when someone had a ‘bag of spanners’ day. 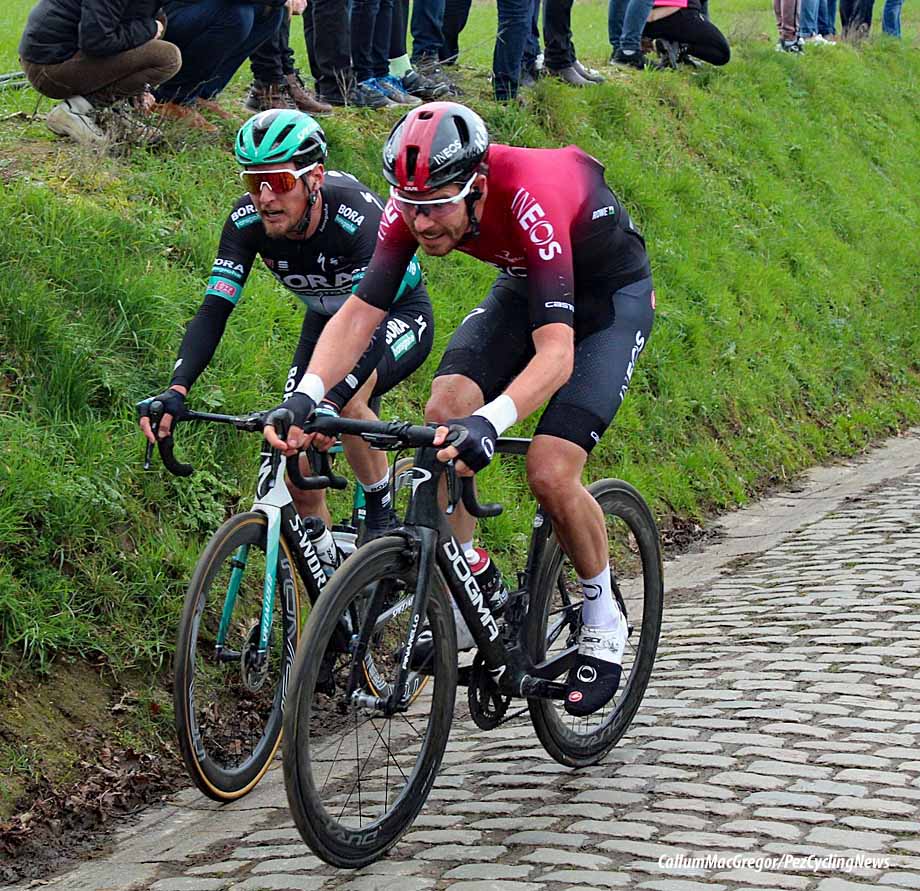 Ineos hardy Welshman is usually at home in races like this – but not today. 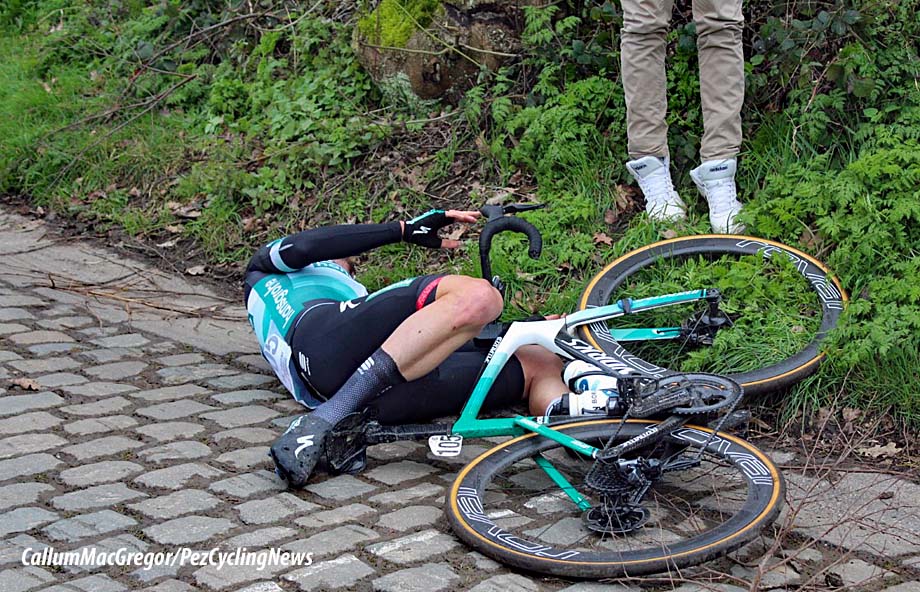 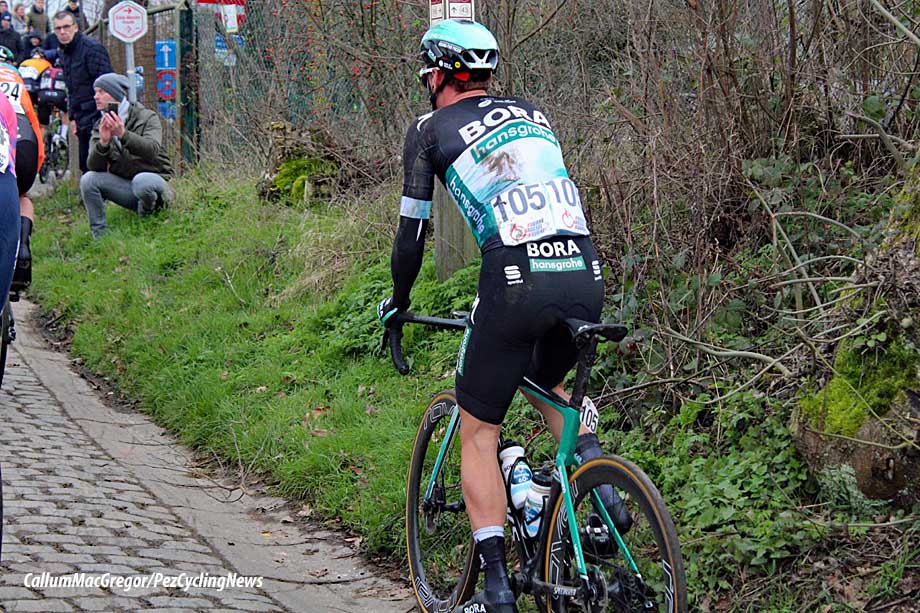 Nor was it a good day for Bora’s former Austrian Champion Lucas Pöstlberger who hit the deck – but did bounce back up; with thanks to Callum for some nice images. 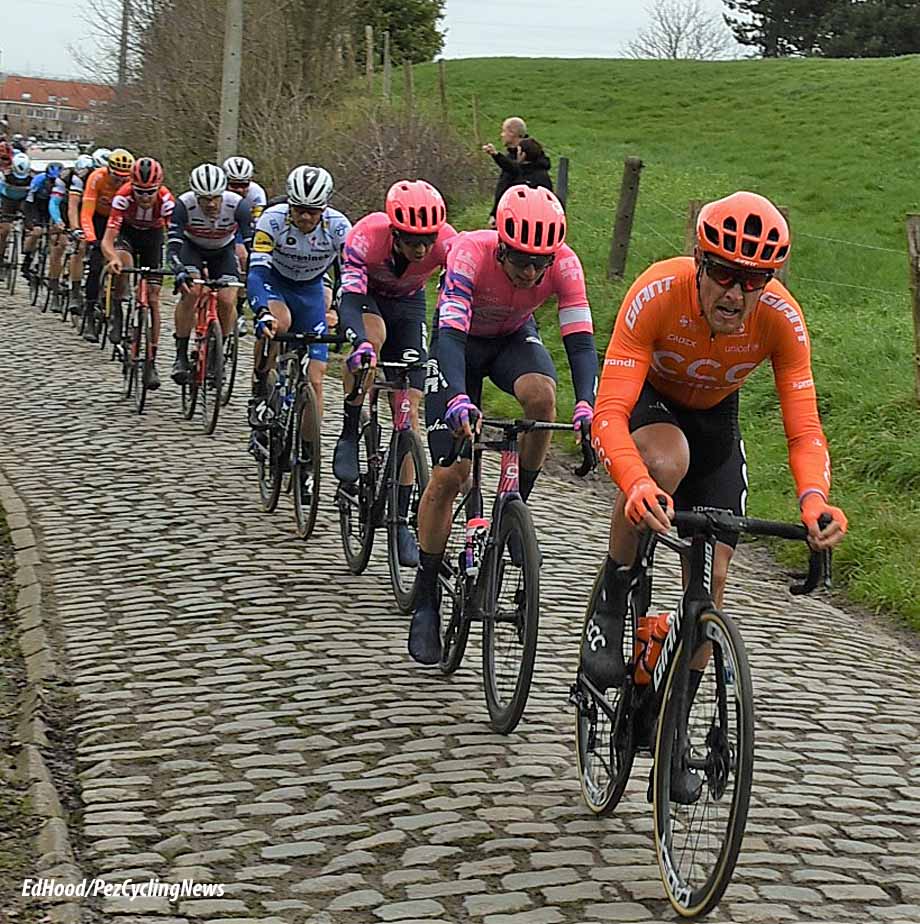 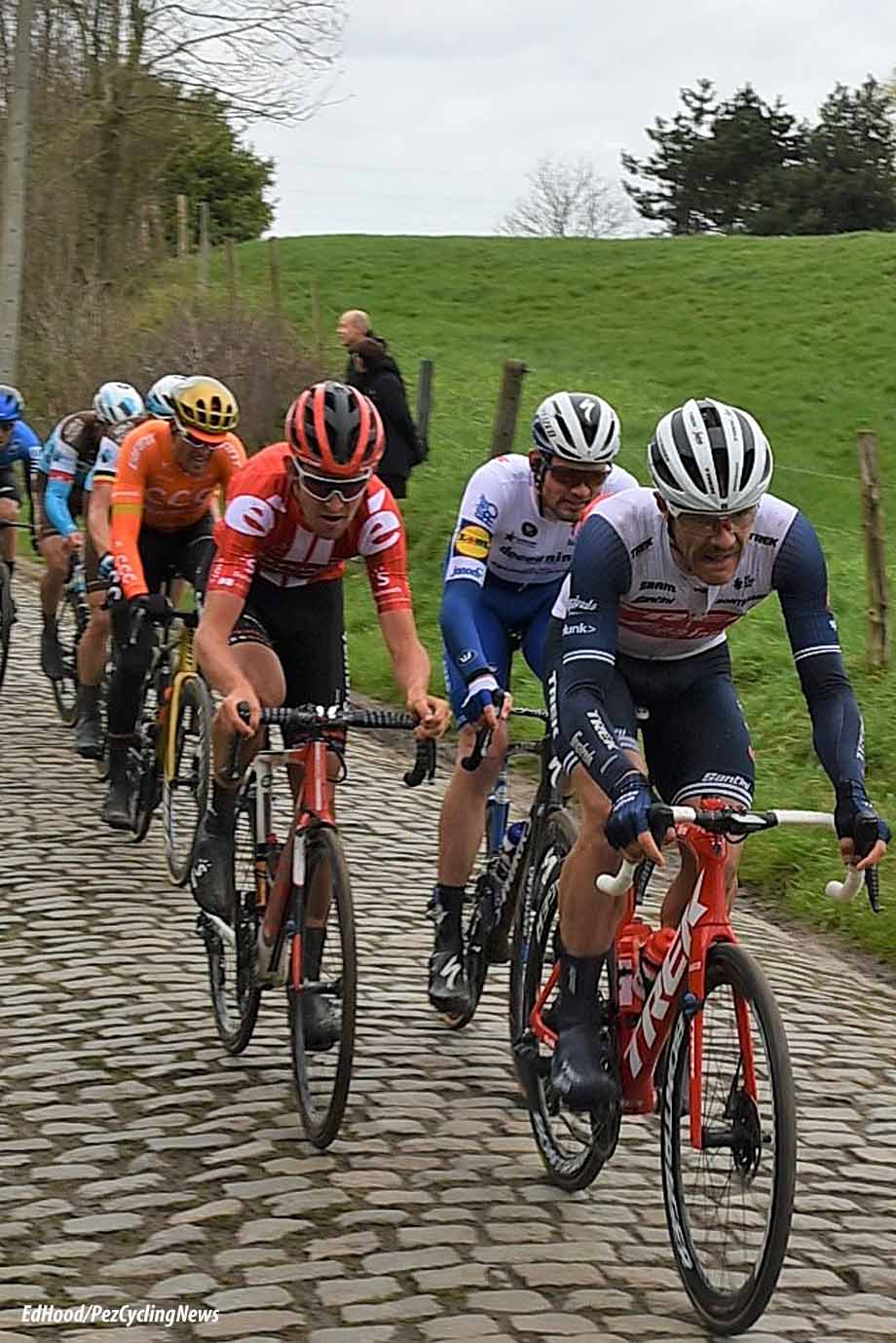 I was a little further down the hill and caught Matteo Trentin on point behind the break with Stuyven, GVA, Benoot and eventual winner, ‘Danish wolf’ Kasper Asgreen all handily placed. 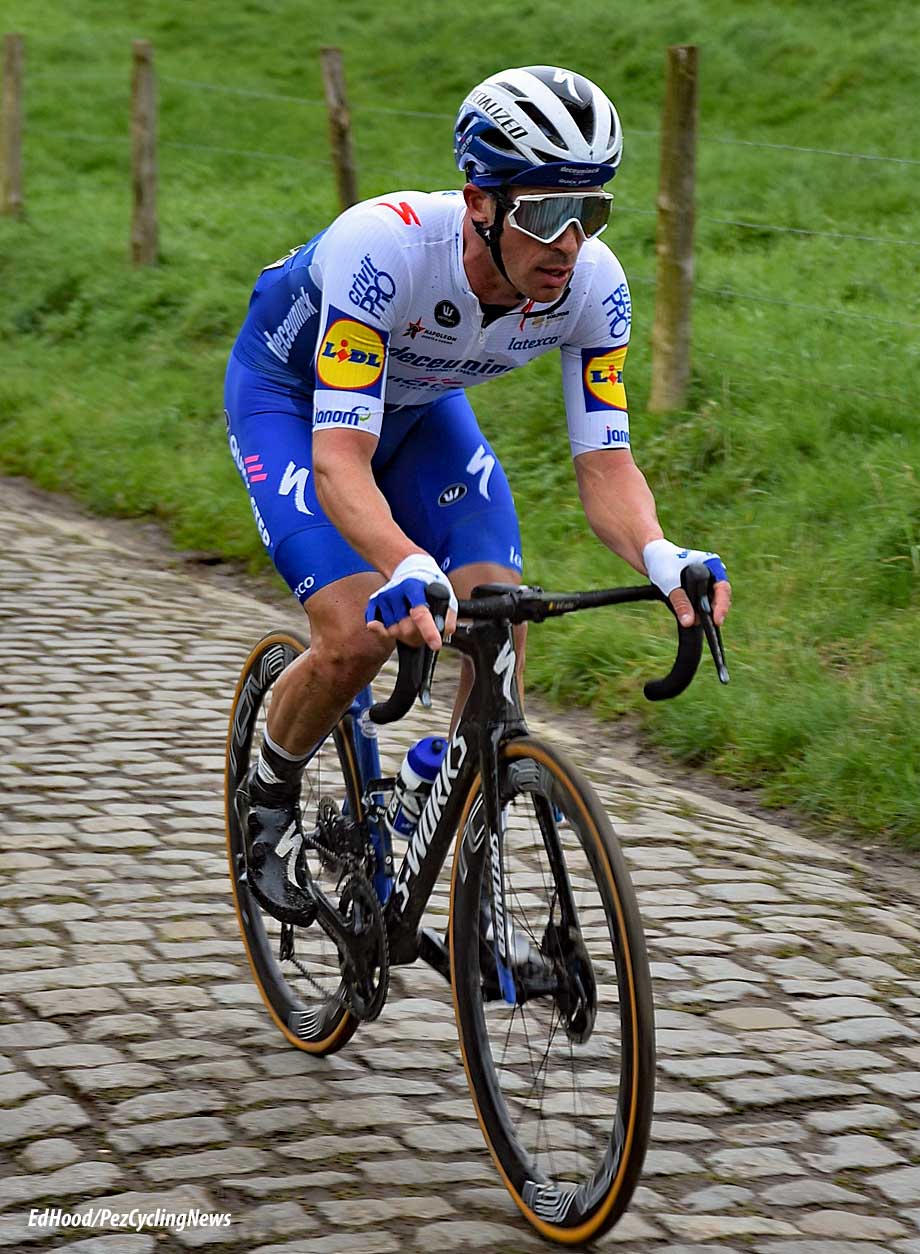 But not everyone who’s off the pace is having a bad day – Iljo Keisse’s job was done after working hard for Kasper for the first 100K. 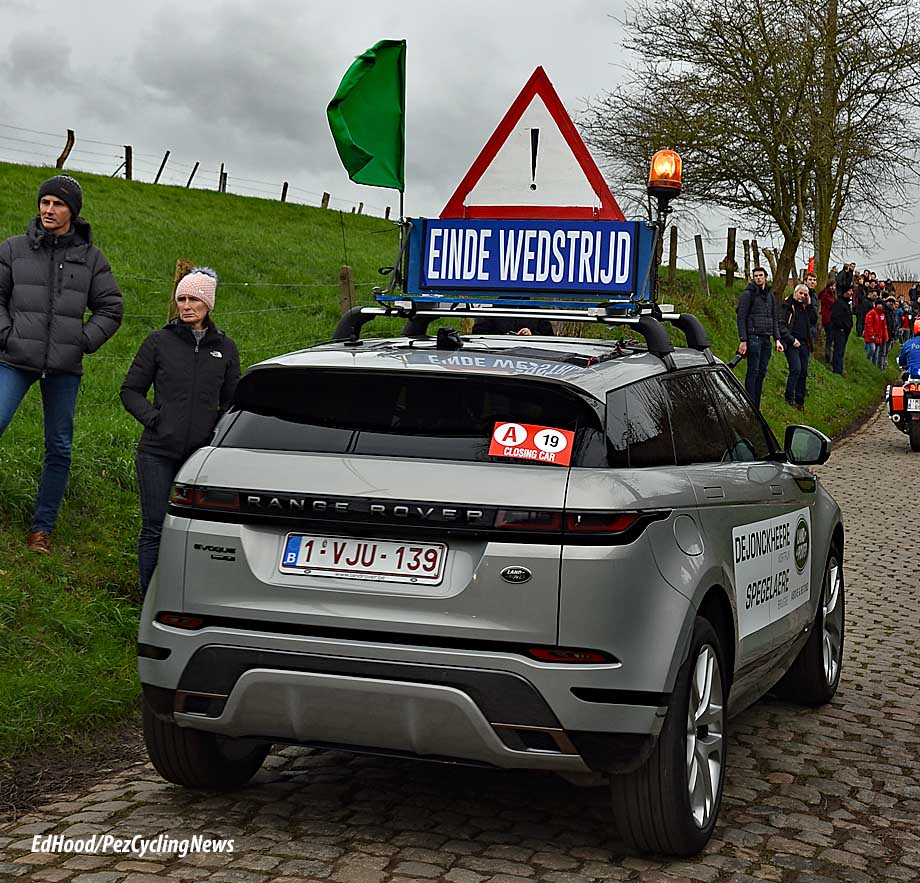 ‘Einde Wedstrijd’ and the green flag means the race is past and the roads are open. 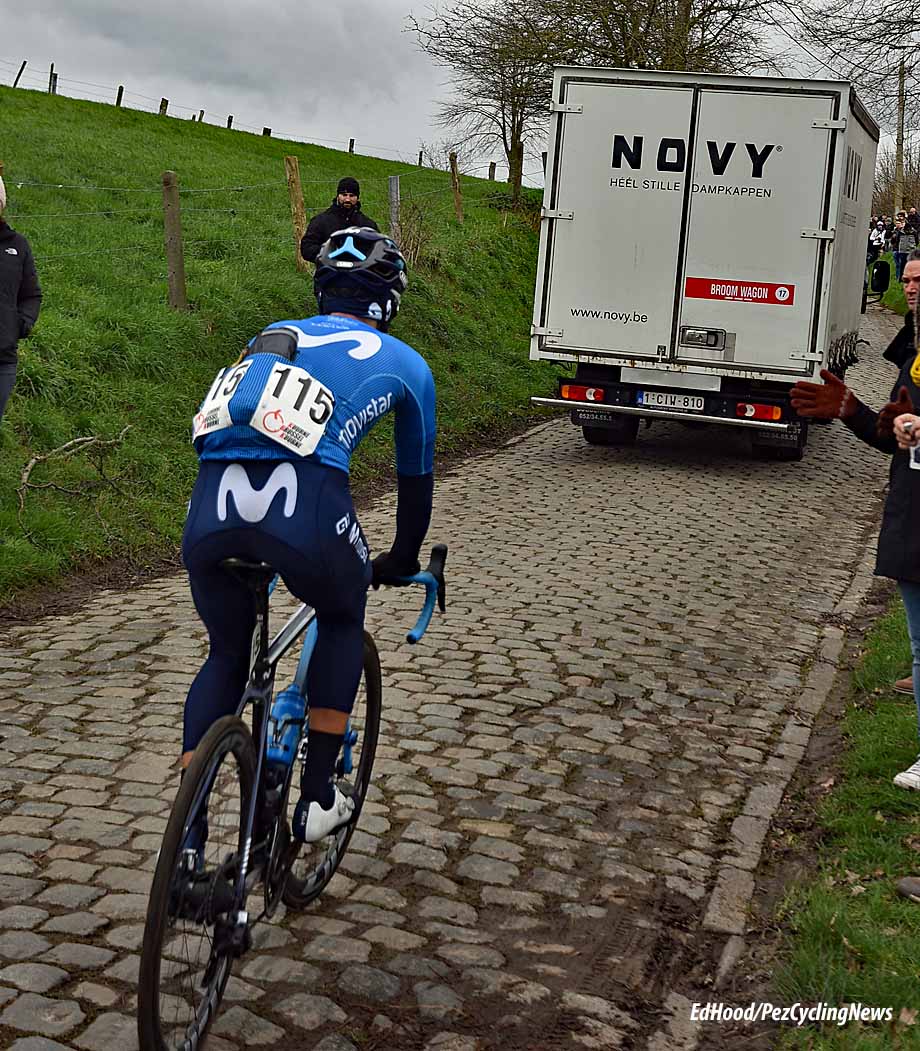 But #115, Luis Mas Bonet had waved the vehicle past, he was getting off that bike at the top of the hill. We headed down to Ronse and our favourite bar, L’Escale where the owner switches off the soccer and gets the pils poured when he sees us. 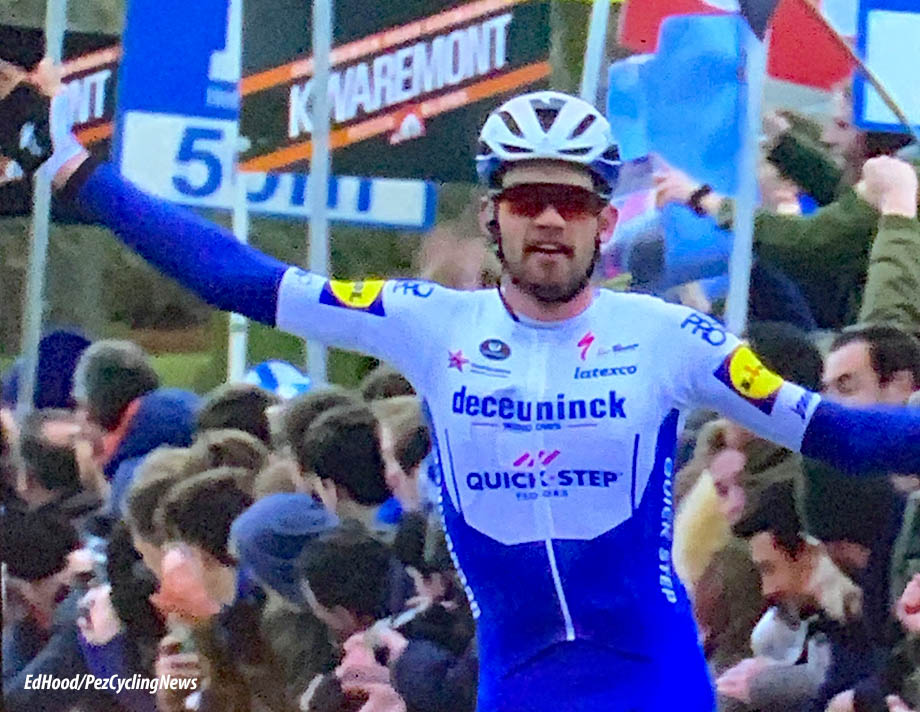 We were organised in time to see Asgreen drop breakaway survivor Boris Vallée (Bingoal-Wallonie Bruxelles), who he had bridged up to, hold off the peloton by seconds and put a smile on Patrick Lefevere’s face.

All that was left was for us to say to our host; ‘au revoir, l’annee prochain, Monsieur.’ Or was it ‘tot ziens volgend jaar meneer.’

# Keep it PEZ for 2021 Kuurne-Brussel-Kuurne report and result and more news from Belgium in EUROTRASH Monday. #