With the queen stage done and dusted at Paris-Nice pro racer and journalist Lee Rodgers gives us his opinion on the happenings so far in France as only he can. Brutal, honest & at times controversial, this is Lee’s Lowdown.

Paris-Nice roared into life on Stage 5 in the final kilometers of the Montagne de Lure and ended up in a cracking victory for Sky’s Richie Porte. The super-domestique seized his chance with aplomb in the absence of team leaders Sir Bradley Wiggins and Christopher Froome to seize both the stage and the GC lead.

That was the obvious talking point and it’s one I’ll return to, but there have been a few others worth looking at in this year’s Paris-Nice.

With several big names opting out of this edition of the race in favor of Tirreno-Adriatico, you have to wonder about the future of this race. It’s beautiful, hard, iconic, and winning it is hugely prestigious- but maybe not this year.

What do you do when the stars decide their legs will be better served in another event held at precisely the same time and in a more stable climate?

Who knows. I wouldn’t like to be the organisers of Paris-Nice right now. A lack of meaty names means a lack of meaty sponsors. We’ve lost and still are losing enough events around the world and especially in Europe, we don’t need this grand old dame to wither away as well. 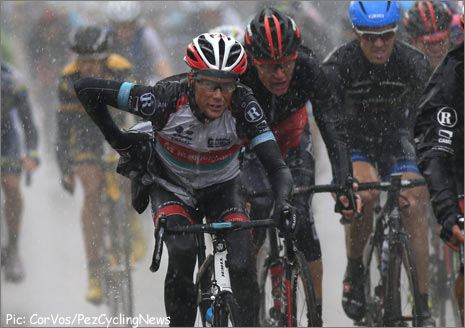 Typically having better weather than Paris-Nice, Tirreno Adriatco this year has seen anything but.

Back to the racing, and specifically the sprinters: huge shame for Nacer Bouhanni of FDJ to crash out on Stage 2 whilst in Yellow. Worst still was that he landed on his face. Watching the spill again you can see it was a schoolboy error, he went in to a tight right too high up the road, lost his front wheel, and he’ll be kicking himself for going down so easily.

Egg on his face? More like 4 inches of crusty road rash.

That’ll be fun for another 2 weeks at least…

Full points though to him for his French tricolor skinsuit that he wore to snatch the sprint on Stage 1, which was all the more splendid for the fact that there wasn’t a sponsor’s logo to be seen on it. The corporate heads at FDJ must have been on the phone in a shot after that – I’ll bet his team manager half-wished his sprinter had a quiet day after that conversation! 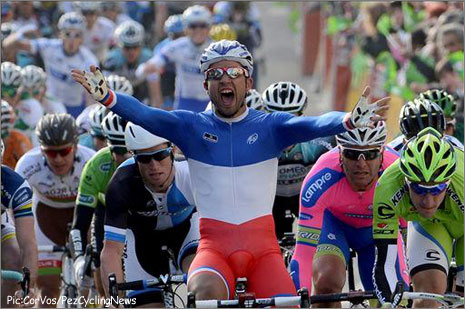 So with Bouhanni slipping on the proverbial banana, it was left to Marcel Kittel of Argos Shimano to romp home on Stage 2. Now, I don’t want to do the young man a disservice but I think we all know he wouldn’t have won that had Cav, Greipel and even Sagan been there.

It’s not that Kittel isn’t a very good rider – he plainly is very handy, but I just get the impression that he will win minor races for the vast majority of his career. He is sort of a European Tyler Farrar in that sense. No offence meant, it’s just that the guy with the big mouth from that rock between England and Ireland is the best there has ever been over the last 300m, and until he goes (and that big German, who is also pretty fast), it’s gonna be slim pickings for the mere mortals out there.

Cavendish is one of those naturally balanced athletes – he’s got a massive chip on each shoulder – and he was born to sprint.

One guy who has impressed is the young American, Andrew Talansky of Garmin-Sharp. What we could be seeing here is a very natural progression from decent to good to brilliant. He’s at good right now, but his palmares – and his maturity – point to potentially very good things.

2011 comes around and he bags 4th in the Tour Mediteranean and 17th in the Tour of California. But then he wins the Tour de l’Ain in 2012 and very quietly but no less impressively, gets 7th at the Vuelta a Espana.

So here is a kid who can climb, time trial and who showed great maturity to beat some very good riders on Stage 3 and in the process seized the GC lead. 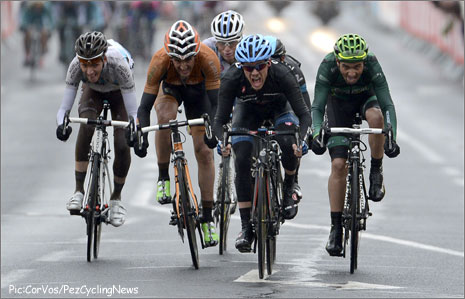 Speaking after stage 4, having retained the race lead, he said this:

“Today we knew it would be the trickiest stage of the race and I would be alone towards the end. We knew what kind of team we brought here. Last night we talked about it and we knew I was going to be on my own in the last 30km. We wanted to keep the jersey but I wasn’t stressed. If I lost it I could always take it back tomorrow. The only way to keep it today was by using smart tactics.”

Smart indeed, fella. And again, impressive for a 24 year old.

He lost the lead on Stage 5 but it was encouraging to see him taking the fight to the others earlier on. I could be wrong but I do feel that the performances we are seeing from these younger riders is all a sign of a cleaner peloton. Not clean, but cleaner.

The racing is less predictable and more guys are winning. Smaller groups are staying clear and the times on the mountains are coming down, as well as the average speeds.

One more thing of note from Stage 4 was seeing Ivan Basso drop off the back and out of contention. Is it just me or is Basso kinda hanging around like a bad smell these days? Like an unpopular gatecrasher at your house party, sat in the corner swigging booze he didn’t bring with him and looking decidedly shifty. More rumors about his doping past came out last week and I can imagine that a lot of the younger guys would just like to see the back of this Old Guard. 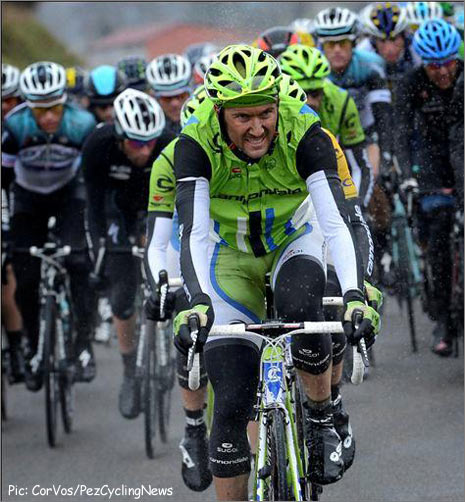 Ivan Basso working as a domestique for early yellow jersey holder Viviani on Stage 3 this year.

Speaking of the Montagne de Lure, where he actually lost the race lead to Porte, Talansky said this:

“Once they go over 20 minutes it’s better for me and it’s going to be around 35 minutes. Contador climbed it in 34 minutes in 2009 so it’s going to be 35 minutes at least for us at 1,600 metres, which is pretty high. I am looking forward to it. Today was stressful but when you get to a climb like that all you have to do is to go as hard as you can and whatever happens happens. It’s that simple.”

I’d love to see the times they did on Stage 5 this year. Could be a very interesting comparison.

And so finally to Richie Porte. Great ride from the Aussie, who put over 20 seconds into some very good bike riders. Porte did all the hard work but the devil, as they say, is in the detail, and the master of that detail is Dave Brailsford. 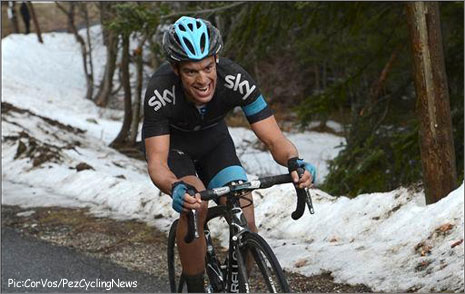 He worked out a blueprint for Wiggo, then for Froome who won Oman this year, and now seems to have cracked it for Porte too. Three potential Grand Tour leaders in one team.

Now that’s a nice problem to have…

Lee Rodgers leads a double life as a pro racer on the UCI race circuit with the CCN Racing Team, competing in the UCI Asia Tour as well as some European events and the likes of the Tour of Qatar and Oman, rubbing shoulders with the best the WorldTour has to offer, whilst keeping up a day job as a cycling journalist. The highlight of his cycling career so far was winning the Singapore National Champs – road race and ITT – as well as claiming the Green Jersey at the 2.1 Tour de Taiwan in 2012, and naturally, writing for PEZ. His writing appears in several magazines and websites and you can catch up with him regularly on his blog, www.crankpunk.com.
Like PEZ? Why not subscribe to our weekly newsletter to receive updates and reminders on what's cool in road cycling?

Race Analysis: A Porte In The Tempest